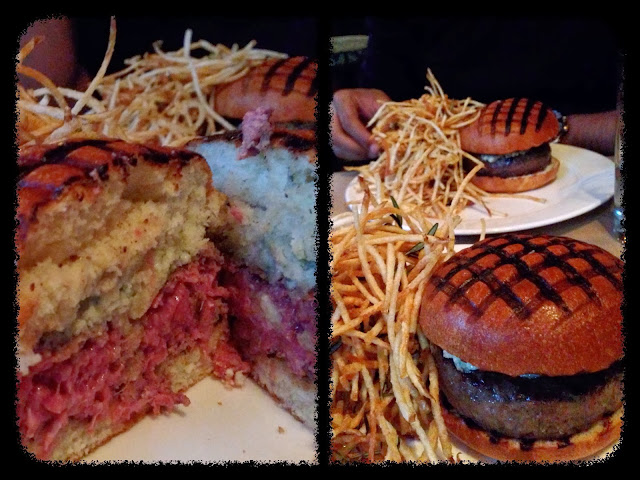 Yea I am still yapping on about New York, sorry.

I have pulled together some highlights of the lighter eats we had. If I am honest, there are quite a few places in between bar hopping that I can no longer recall the names of... or their location... or the food they offer... but I'm so sure they were brilliant.

Burger: The Spotted Pig
We were tossing up between Minetta Tavern's black label burger, Burger Joint at Le Parker Meridien or April Bloomfield's Spotted Pig. We went for the Chargrilled Burger with Roquefort Cheese & Shoestring Fries at The Spotted Pig in the end.

Tacos: Tacombi
Cynthia has always sang praises about Mexican food in the States. Mr V did say the West coast does it much better, but I'd like to give it a go anyway. So he pointed us to this inconspicuous white shop in Nolita, where a van pumps out good tacos. 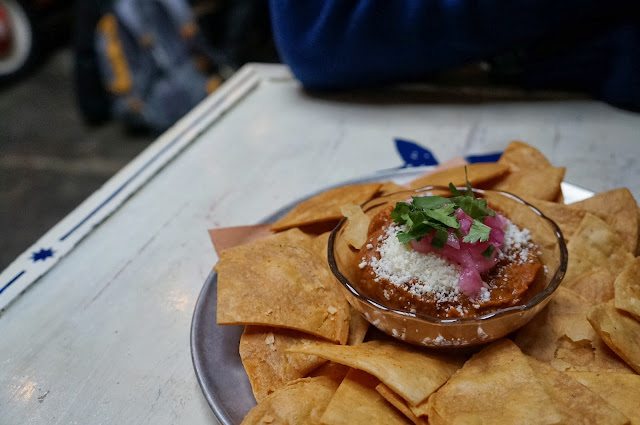 Frijoles Criollos were toasted corn chips served with a chorizo dip. An incredibly moreish nibble with a smoother texture than the typical tortilla chips we get here. 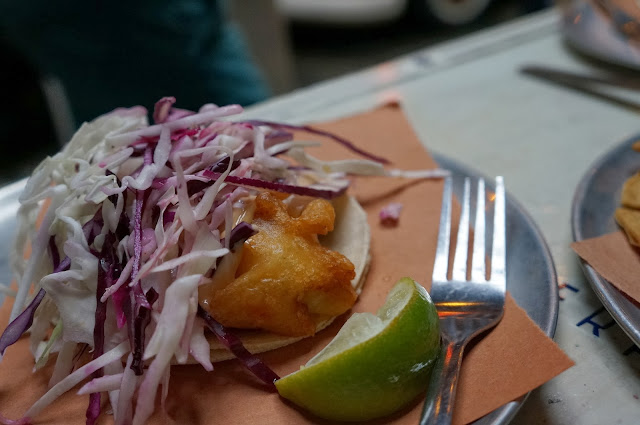 The tacos were fantastic - the crispy fish taco also came with a slightly denser fillet of un-fried fish to throw some textures into the mix; taco especial (front) was pulled spicy pork topped with pineapple cubes, packed with meaty flavours and a strong kick, but the pork belly (back) was just too fucking good. The slow cooked pork was already oozing with meat juice, but it was the rinds of gelatinous pork skin that blew my mind. 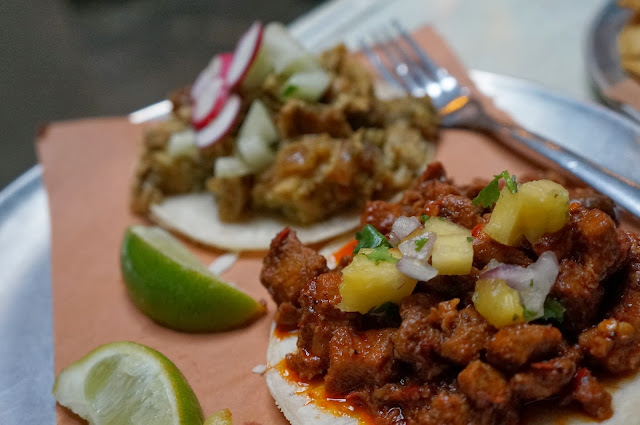 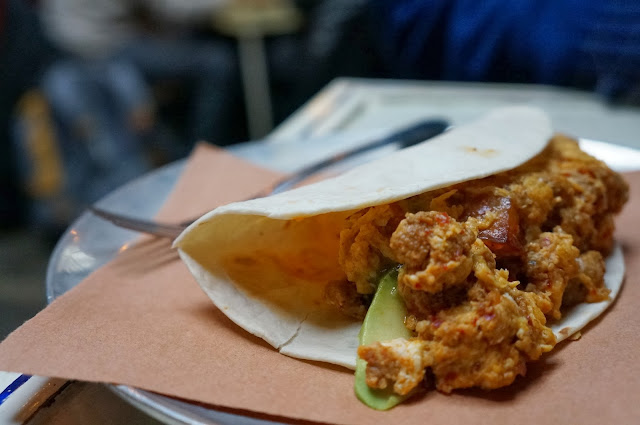 We also tried a breakfast taco of eggs with chorizo. I could eat this everyday; soft scrambled eggs mixed with chilli grease from chopped chorizo was gorgeous; the healthy wedge of avocado was refreshing and lifted the oils to leave a clean aftertaste.

Another tacos joint was La Esquina in SoHo. Again, it looked like some dodgy corner diner from the outside.  We only tried the stand-up / take-out section upstairs as the hidden restaurant downstairs was by reservation only. Veal tongue with salsa verde was particularly impressive, but I wouldn't say no to the chargrilled steak or pulled pork either. 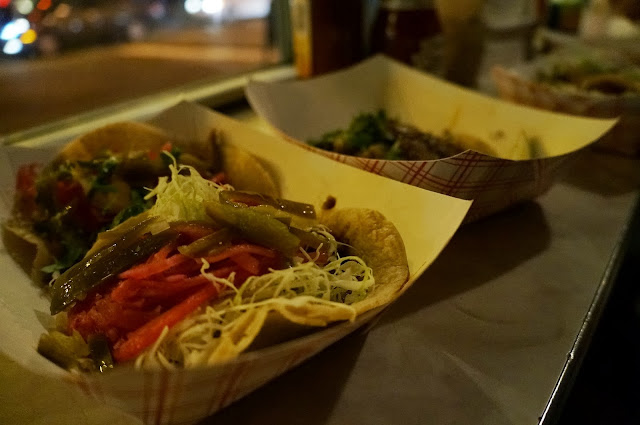 Pizza: Lucali's
While most people were queuing for the famous "pizza under Brooklyn Bridge" (Grimaldi's), Mr V had a better recommendation. This cosy gem in Carroll Gardens, or what I ignorantly labelled the rural area, was a homely restaurant with a massive brick oven at the back of the dining room.

The menu couldn't be simpler: a large margarita pizza pie with your choice of toppings or calzone in 2 sizes. We went for everything on the pizza plus a small calzone with mozzarella cheese plus tomato sauce on the side, as recommended. 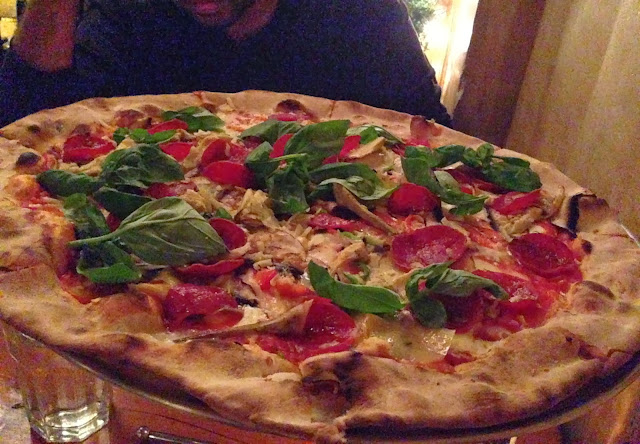 The paper-thin dough pizza with a brittle, charred bottom was blissful, topped with moderate sprinkles of pepperoni, onions, peppers, mushroom, olives etc, but the absolute key was the combination of fresh basil and slightly sweet tomato sauce. Stunning.

And it gets better. The calzone, overflowing with stretchy, luscious mozzarella and charred on the outside, still have me drooling over my keyboard. When dipped in the plum tomato sauce served on the side... its euphoric simplicity was downright awesome.

Prime Rib Sandwich: Eataly
Eataly was a palace of Italian goodies, from wine and cheese to focaccia and gelati. Mr V recommended the prime rib sandwich from the rotisserie. 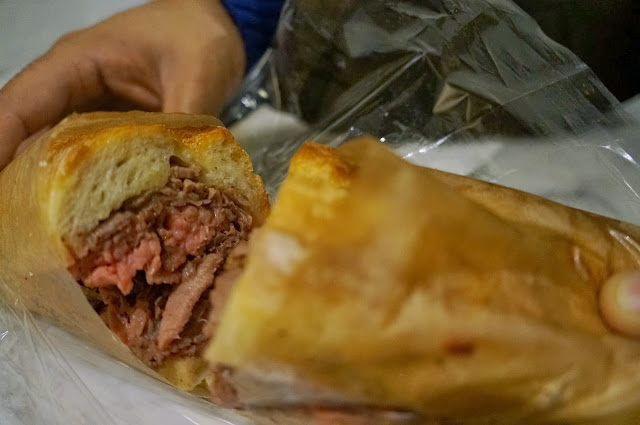 The ciabatta was crammed full with 100% black angus beef, seasoned with Eataly's porcini rub, and drizzled with Taggiascan extra virgin olive oil. And boy what a sandwich - basically we had to re-visit en route to the airport.

One of my favourite things, among numerous others, is the range of late night dining options in this alluring city. One too many cocktails later, the choices left my head spinning even more...

Bar: Employees Only
Mr V introduced us this prohibition bar / restaurant; it's an intimately sexy joint with c.10 tables at the back, most of which had a reserve sign. To put things into perspective, the steak tartare here was so good that we came here twice in 3 days. 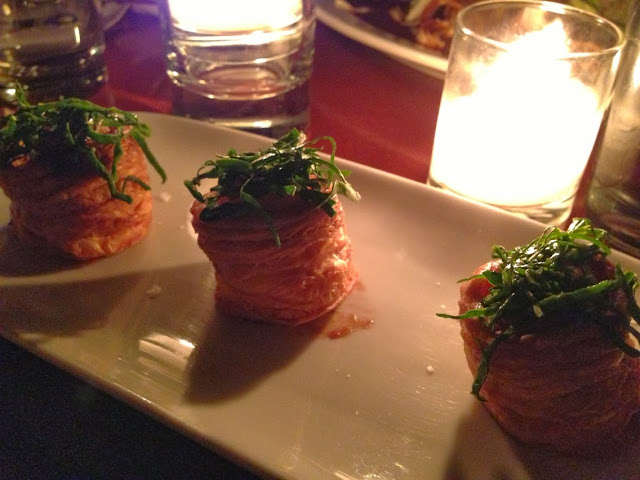 On both occasions I had the hand-cut steak tartare. It was a star-worthy tartare; undoubtedly ranks among some of the best I have had in Paris. The roughly chopped beef was buttery and silky smooth, flavours were intricately balanced to bring out the delicate tones of the raw beef. The only thing I would change is to swap the crostini for french fries; a couple of slices of crostini is fine, a plateful felt somewhat offensively excessive.

The Balkan Burger won the gents over and the piping hot paprika wedges were addictive. Bone marrow poppers (above) quickly disintegrated into a mouthful of bovine richness, all washed down with some delicious cocktails. 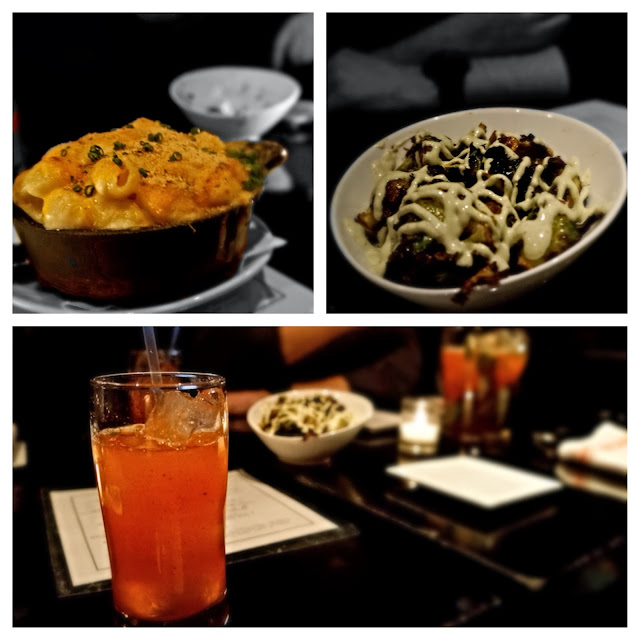 What an interesting cocktail bar - with no menu. We just described the kind of cocktails we like, et voila! Our vodka-based strawberry cocktail with a bit of fizz was delicious.

Smorgasburg - A Brooklyn Flea Food Market
We came here for the Ramen Burger. Do pardon my cluelessness but I had never heard of ramen burger until now. And Byron (no, not Byron Burger, but he surely should consider working for them as I'm confident he can sell burgers to vegans) sold to it to me, effortlessly. It was late and the shredded beef burger had sold out, so we settled for the original.

Originally the brain child of Keizo Shimamoto, it's exactly what it says on the tin, a burger with ramen instead of the bun. I must say I wasn't overly impressed. The compressed ramen 'bun' was dry and flavourless despite the soy sauce, which had sadly accumulated at the bottom of the wrapper due to its flimsiness; the beef patty lacked juice and bovine wholesomeness. The shredded beef version may have been better as there is more surface to cling onto the sauce. Either way, I am giving Ramen Burger the benefit of the doubt, putting this down to inconsistency due to limitations from the market environment. 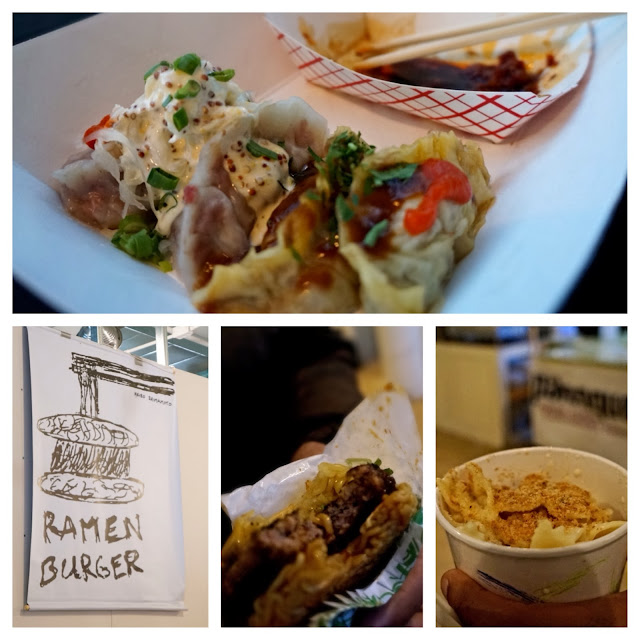 We also tried the Mac 'n' Cheese from Milk Truck Grilled Cheese, which was disappointing compared to the the Mulberry Project above; the dumplings sampler (!) by Brooklyn Wok Shop - 2x Pastrami, duck confit and mushroom & chive.  I would love to visit this restaurant properly to check out the full menu; the pastrami dumpling with sauerkraut and wholegrain dijon was ingenious!

I also sniffed out some great munchies at the Chelsea Market; the bacon popcorn at Liddabit Sweets, giant lobsters and shellfish at the Lobster Place, legendary brownies by the Fat Witch...