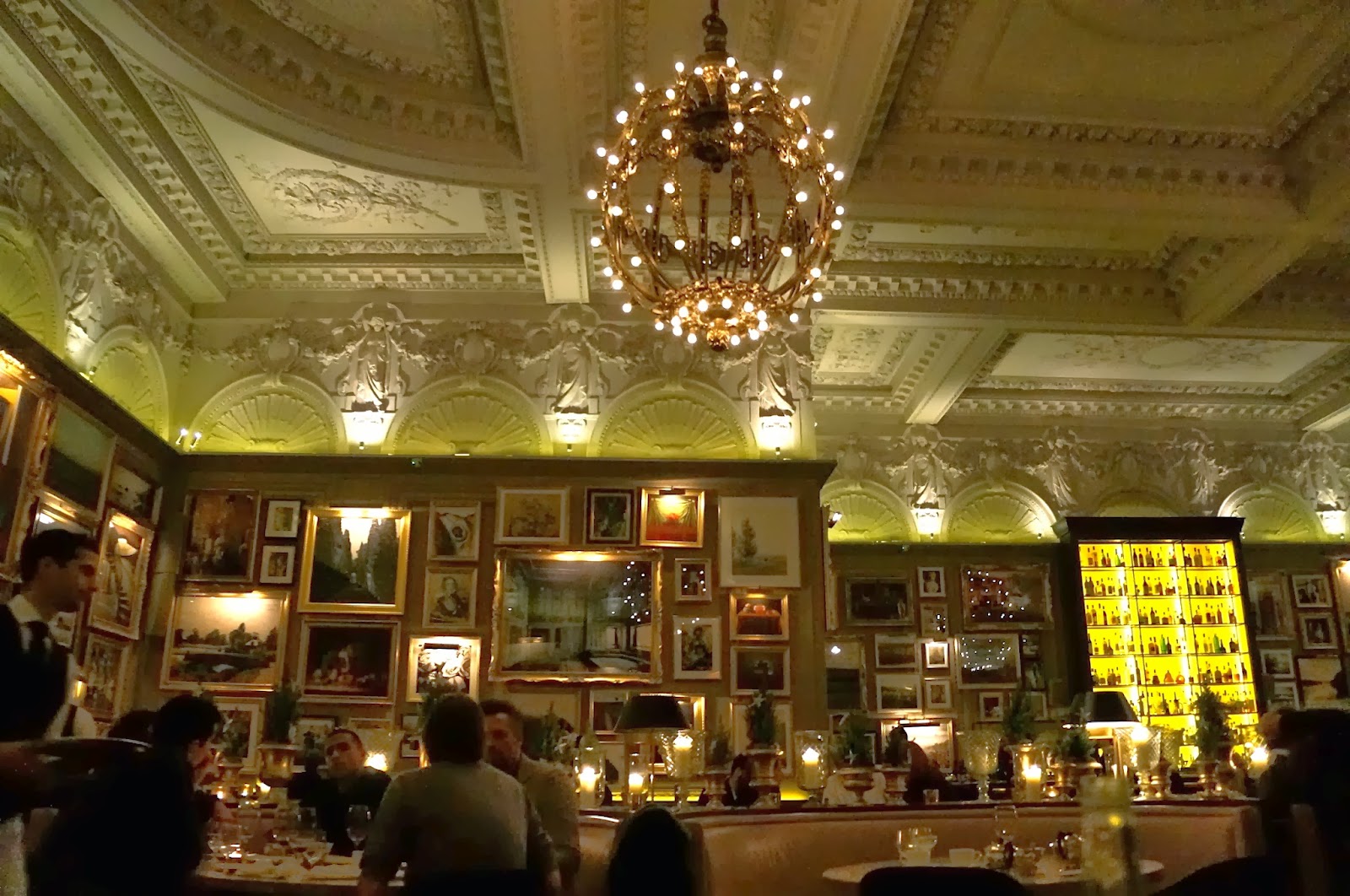 Did you know the chandeliers at the Berners Tavern are the same as the ones at Grand Central Station? I only noticed when I was tidying my photos from NYC.

I wanted an evening out before we leave for New York for Christmas. When I sheepishly called up for a reservation in early Oct for Dec, thinking I was planning too far ahead, the lady on phone laughed and said most tables are gone. Fine, dinner at 10pm then.

We had a couple of drinks at the bar before our table was ready. I tried a super creamy Cereal Killer was like a thick chocolate shake, but a pretty strong kick, and a deliciously refreshing and fruity Absolutely Smashing. Mister's non-alcholic mocktails, Once upon a Thyme and Appley ever After were also very tasty. 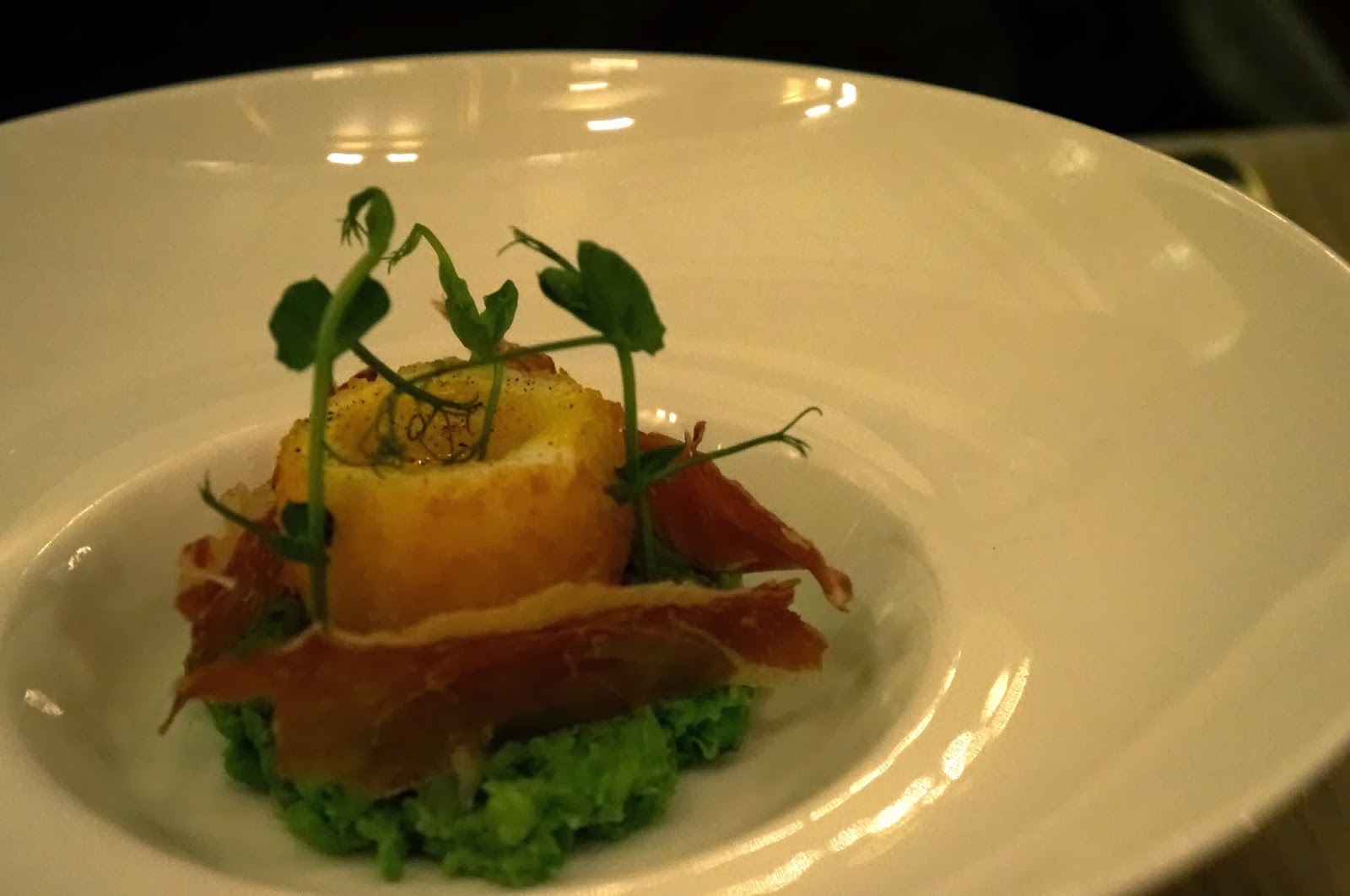 I was really hoping this was similar to the duck smoked ham, egg and chips at Social Eating House; those slices of smoked duck were incredibly memorable.

Well, the beautifully deep fried egg with the well of custardy runny yolk was still wonderfully done. The cured ham, though deeply fragrant and brittle without losing its grease, was a step down from the smoked duck at SEH. The fluorescent mushy peas were whipped to a lighter body but tasted double the concentration; it tasted clean, like the earthy tone was stripped off the peas. I almost started to like peas. 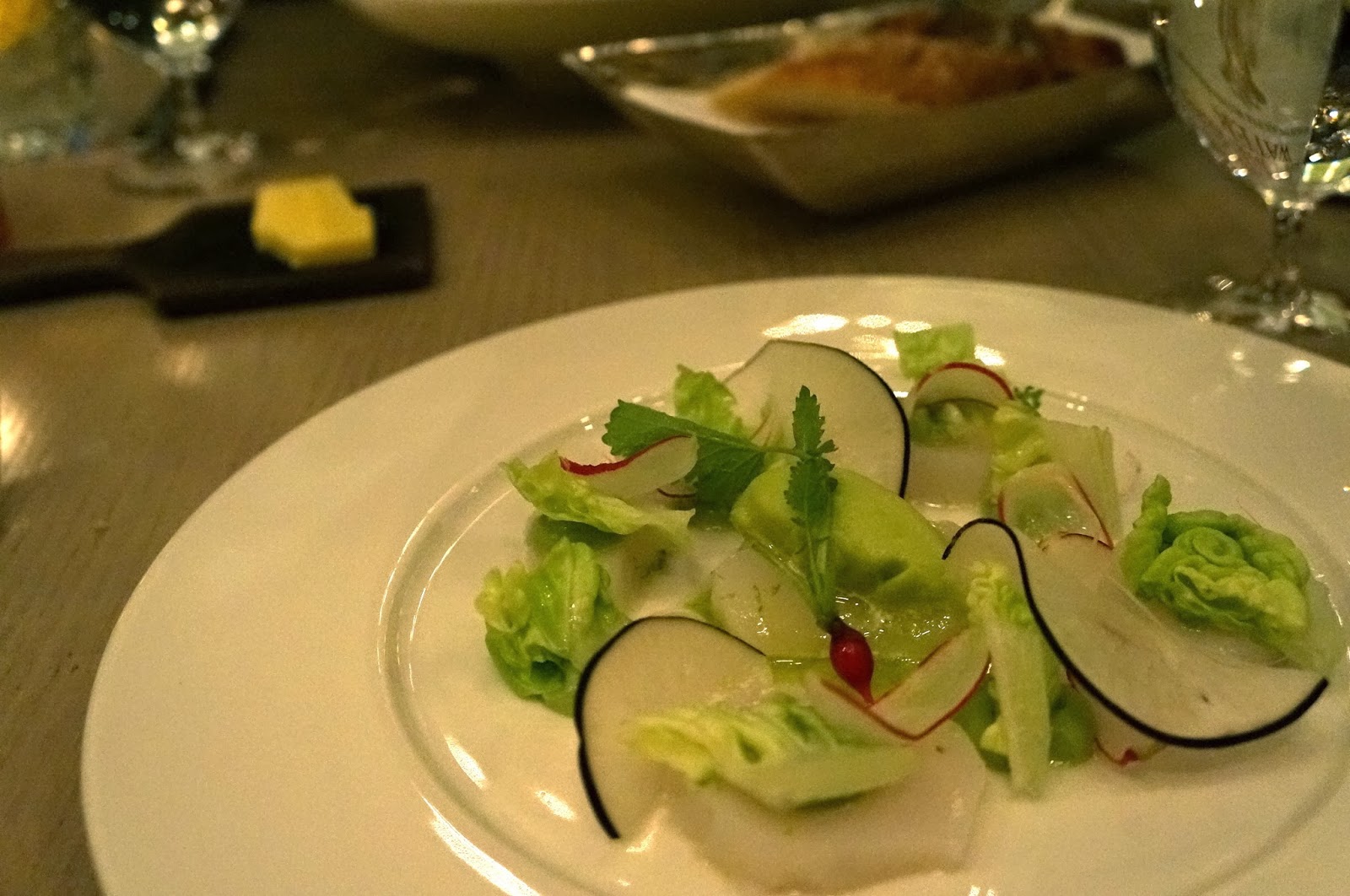 The lime ice contrasted with the jalapeno heat to release this hot and cold sensation on tongue, an ingeniously playful effect. The creamy raw slice of scallop was cool with dissolving lime sorbet, enriched by the buttery avocado, and finished with an undertone of jalapeno. It may have been a chaotic plate, but the everything was delicately balanced and controlled. 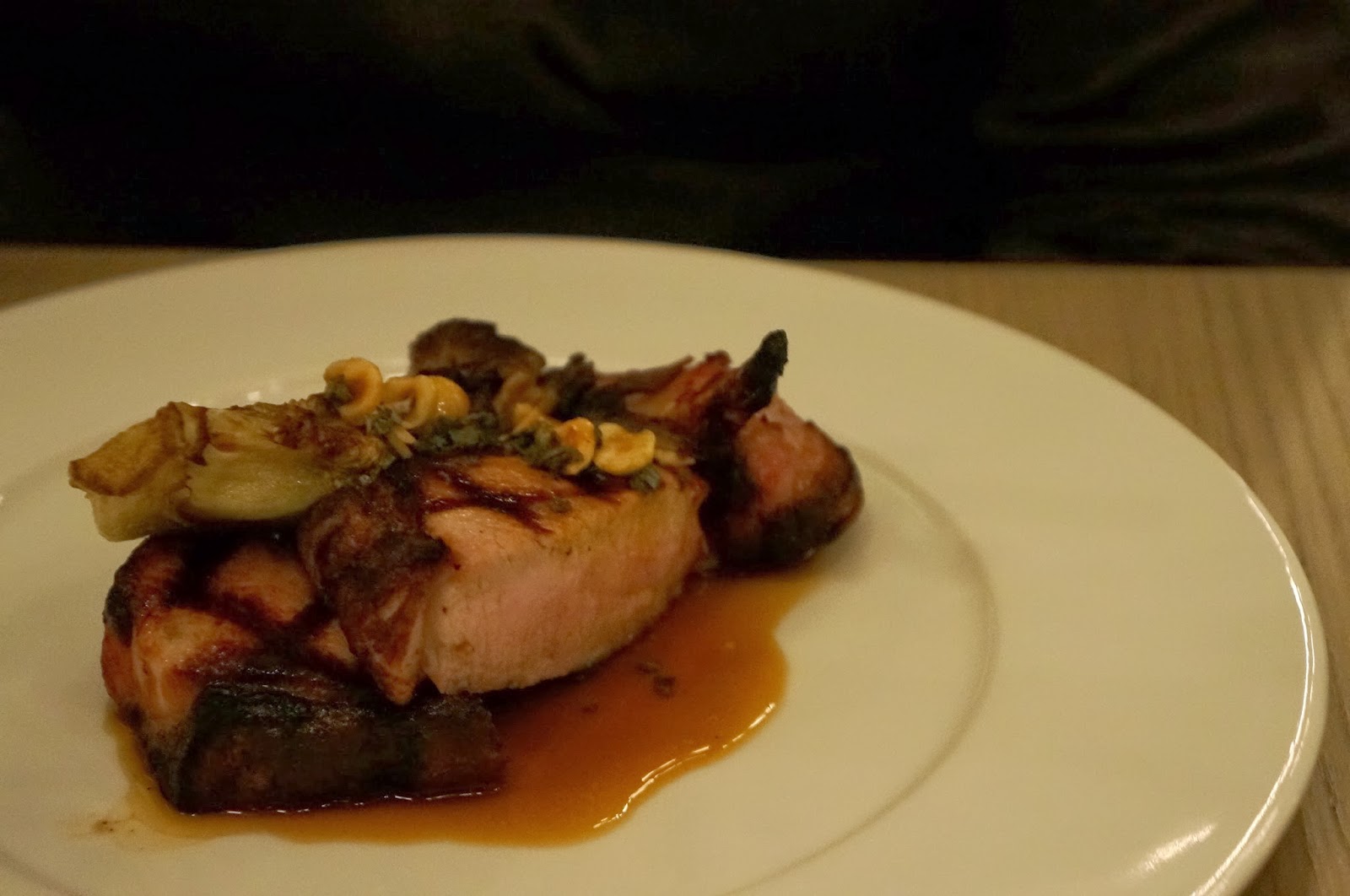 I had pork the last couple of time I dined at an Atherton restaurant; thoroughly enjoy it on both occasions.

Mister's inch-thick chop was slightly dry; the cross-section lacked the glistening pork juice that I was expecting from succulent meat. So it was no surprise to find the leaner parts quite grainy and coarse, and there was only so much jus one could mop up. The parts attached to the generous rind of lard, however, were delicious; especially as the jelly of pork fat erupted with nutty aromas. 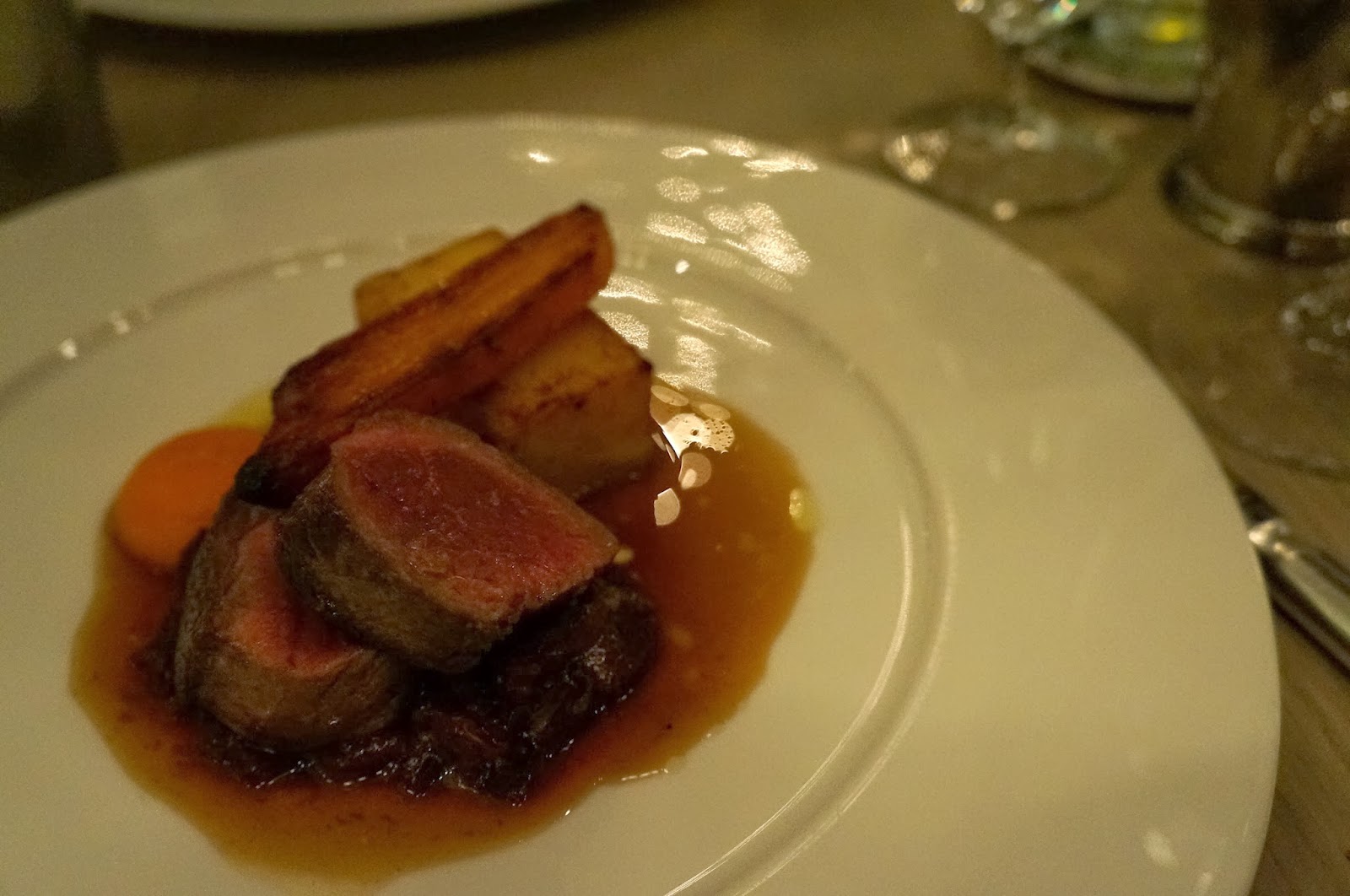 The fillet of venison was cooked to perfection with the ruby red centre. The meat was moist, smooth and muscularly gamey - the cooking was precise and composed.

And because I am picky and difficult, I thought the recipe lacked surprise. Unlike our starters, which were exciting and clever with an eclectic twist, this venison was comparatively boring. There was nothing unique about the dish, both in terms of flavour and the ensemble. Perhaps I have unfairly high expectations.

I have mixed feelings for Berners Tavern. I was determined to like it even before I made the booking, simply because it was one of Jason Atherton's restaurants. Then there was the long anticipation since October, the impressive dining room and the gorgeous cocktails while we waited at the bar. But, and I hate to admit it, the food just wasn't as extraordinary as Social Eating House. Now that's not to say the food wasn't great, it was still better than most restaurants, but I wasn't bowled over. I wasn't already planning my next visit.

The odd thing is, my memory kept saying it was a fantastic evening. It's only when I went through dish by dish that I realised the the flaws. Perhaps it was the ambience, maybe it was Mister.

You may also like: Pollen Street Social, Dabbous, Pearl by Jun Tanaka
at 04:31