Conscious it's been quite a while since I posted anything classic British, I thought it would be nice to write about a rather pleasant Sunday lunch I enjoyed a couple of months back at The Albion in Islington.

It's not exactly the gourmet gastropub like The Harwood Arms with its shabby-chic touch, it's really more shabby than chic here at The Albion. That said it oozes a sense of friendly cosiness and casual familiarity, especially with the rickety wooden tables and mis-matched chunky chairs. 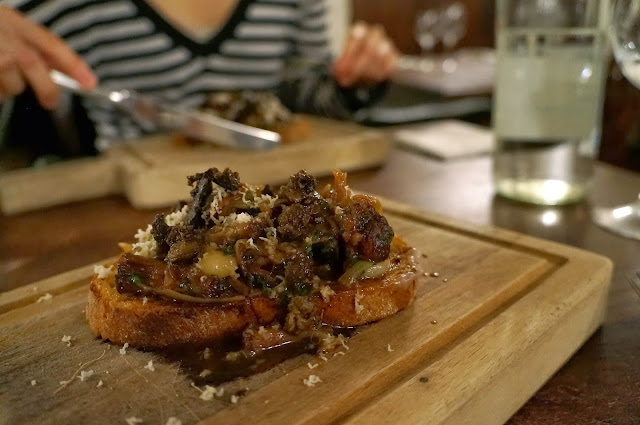 This was divine. The oxtail was slow-cooked and shredded to hold the thick meaty jus, interwind with generous lumps of incredibly melty and buttery bone marrow. Any leaks from the heap of bovine awesomeness was soaked up by the crispy toast, which also helped to take some of the grease off the dish. Delicious.

It's highly unusual that we ordered the same thing on the menu, I thought about going for the mackerel instead, but so glad I stuck to this. 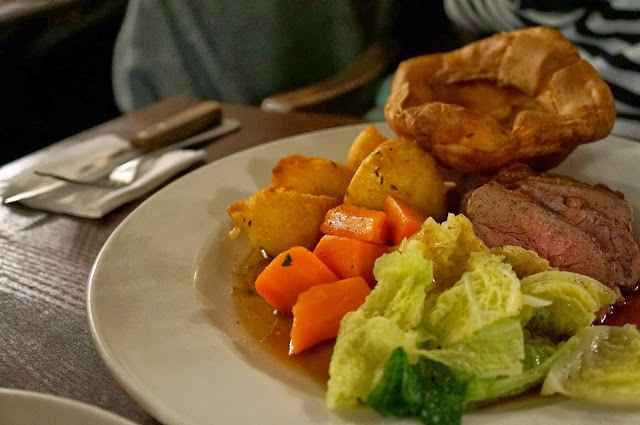 The lamb is overcooked for a medium rare, but it didn't matter because it was still a beautiful piece of meat. The meat was tender and succulent with plenty of lamb tang in the meat juice despite its leanness - even without the gravy the lamb itself carried much flavour.

All the trimmings were served with the roast dishes; The roast potatoes had ruffed up edges, just like how Jamie Oliver had taught us, but these were more hard than crispy, probably been reheated once.  The carrots could have been softer, but the cabbage and the yorkshire were fine. Still much better than the regular, everyday pub sunday roast. 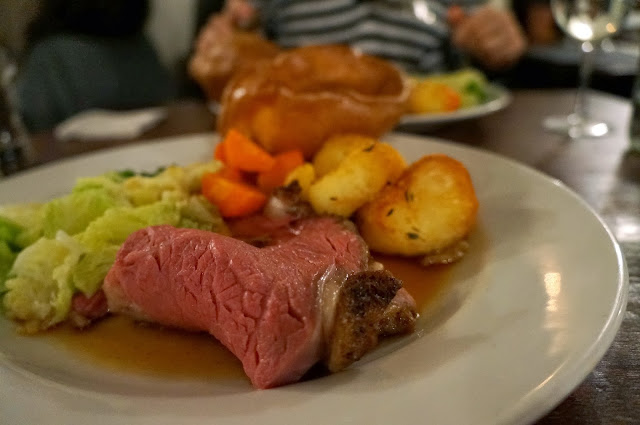 While I adore salt beef, I rarely order roast beef. Perhaps the Sunday roasts at boarding school had scarred me with the completely well done rubber beef that had been cooked over and over again every Sunday.

Thankfully The Albion did a proper job of serving medium rare roast beef, glistening in its meat juice. The thick cut was tender and flavoursome, served with a gravy that worked with the beef instead of drowning it. Gorgeous.

A Sunday roast sounds so simple and common, yet a good one is quite hard to come by. While The Albion may appear to be a typical neighbourhood pub, the kitchen has more to it than what meets the eye. The food was undoubtedly above average - solid, honest and satisfying.

You may also like: Odette's, Launceston Place, Princess of Shoreditch, Smokehouse
at 03:20 No comments: 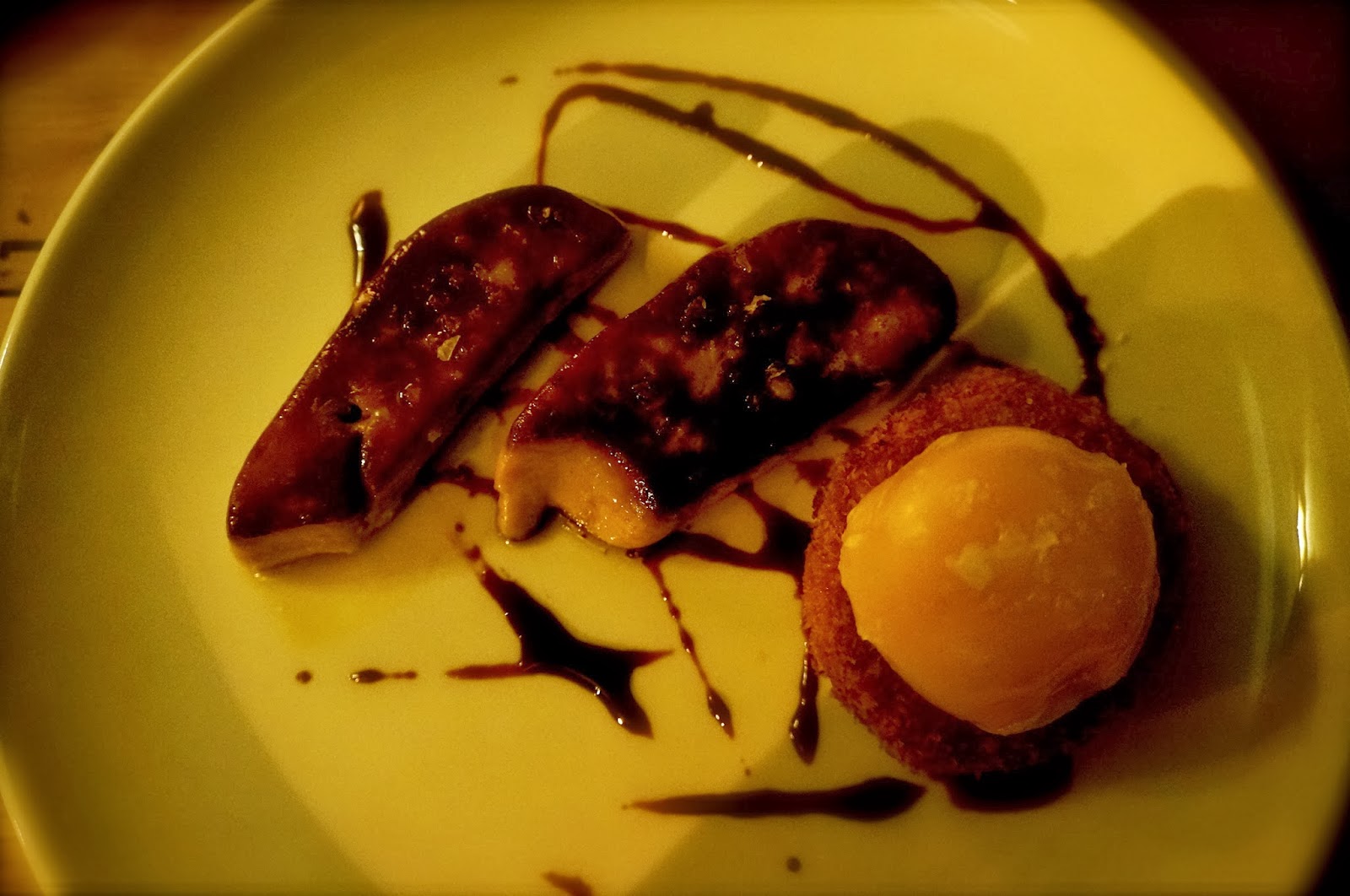 Technically this was the first restaurant I visited in 2014 in London. Just as well, Smokehouse has been sitting on my Eat List for long enough.

Smokehouse has the cosy neighbourhood pub vibe, wooden chairs and tables with block candles, if only they had a fireplace for that warm and fuzzy feeling. The colossal blackboard was packed with various craft beers, ales and ciders - unlucky for Mister (who isn't drinking until.. a certain tbc date). Our friendly server swiftly took our orders and removed our side plates - question: we couldn't order bread, we weren't offered any, so what were the side plates for in the first place?

The couple next to us were having a bit of a difficult time; odd shouts in between forkfuls from the woman, and the man chucked a couple of f-words back. Not that we were eavesdropping but among the issues included the kids, the furniture and that the man didn't seem to care. They were persisting through their starters okay though. Like I said, nothing a good meal can't fix. 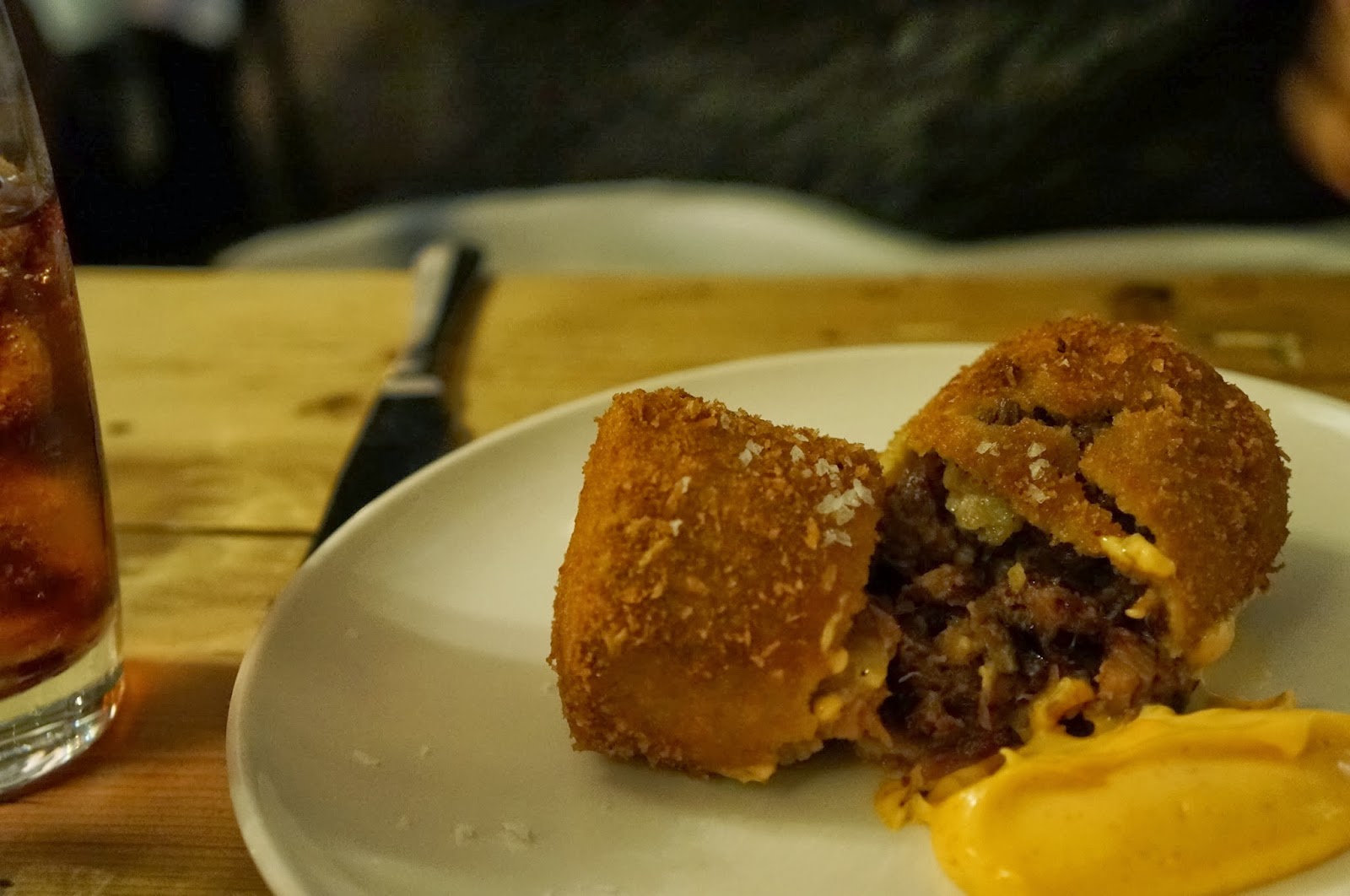 The brisket roll was packed with brisket that had been lovingly slow-cooked to shreds, intertwined with gelatinous tendons and small strings of (seemingly) harmless beef fat, still holding onto their meat juice and overflowing goodness. The tender meat was lightly smoky with strong flavours not dissimilar to salt beef, all wrapped in a grease-free breaded coat.

The gochujang sauce, a Korean chilli paste, was disappointingly mild; more fermented-bean-savoury than chilli,  so it was a gently spiced aioli just to gel things together. The kitchen could be more generous with the sauce too. 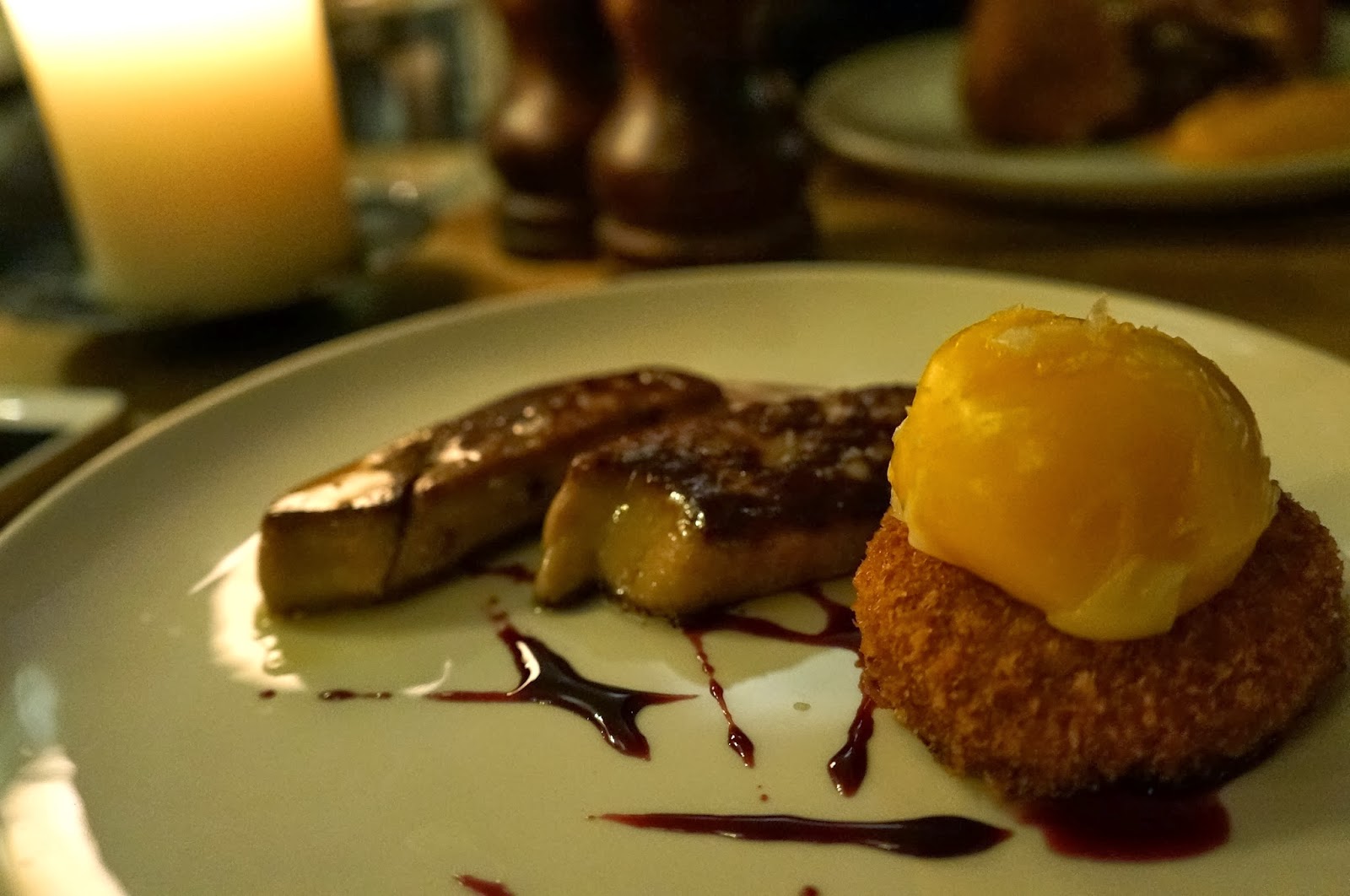 The two slices of foie gras had a beautiful crisp on the outside and a wobbly, melty centre; the most indulgent, velvety richness. It has to be one of the most blissful foods in existence. Then the incredibly sexy looking duck egg yolk, with the playfully gooey centre, tamed the heaviness of the liver without diluting the flavours; it was delightful match.

The apple pie, on the other hand, I wasn't so much a fan of - it was the acidity of apple that I found somewhat offensive; it took away the comforting satisfaction of the foie gras and intruded by piercing spikes of citrus. Perhaps I prefer the more conventional pairing of sweet fruity reductions with the foie gras. No issue, I just left it on the side.

By now the woman had started crying and the man ordered another beer, asking her to calm down and the house was going to be fine. 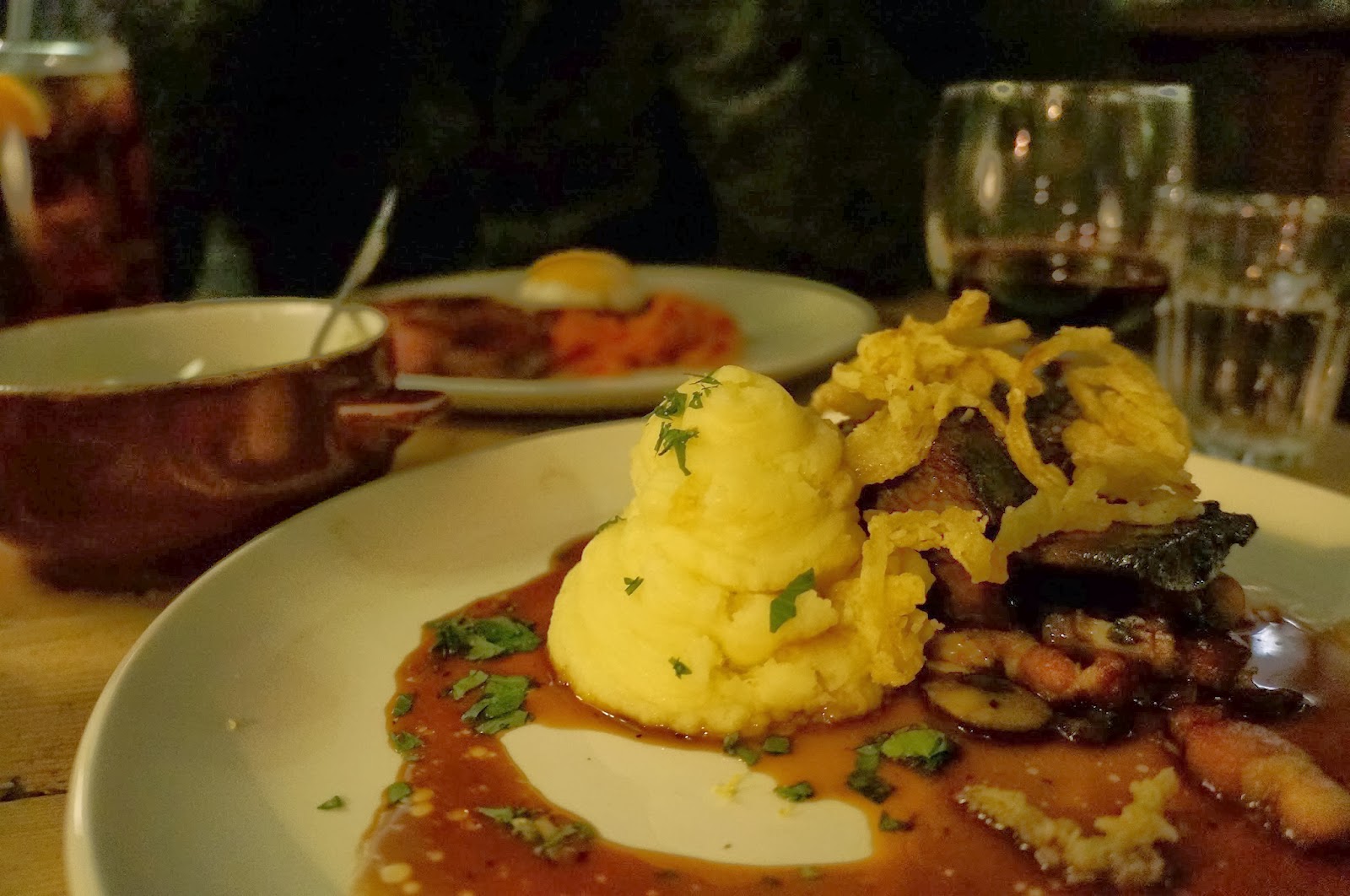 I have done my research so I knew this wasn't going to come as a stew. Still I was surprised by the size of the hunk of meat on bone. The short rib was soft but held its shape; again the smokiness was understated but the rib was mightily meaty. It was a manly plate of protein, a slab of beef very well cooked. I wouldn't rank it on the same level as Dabbous, and definitely nowhere near Dinner by Heston, but this may be as good as it gets for a gastropub.

It could do with more sauce, however, to go with the mash. 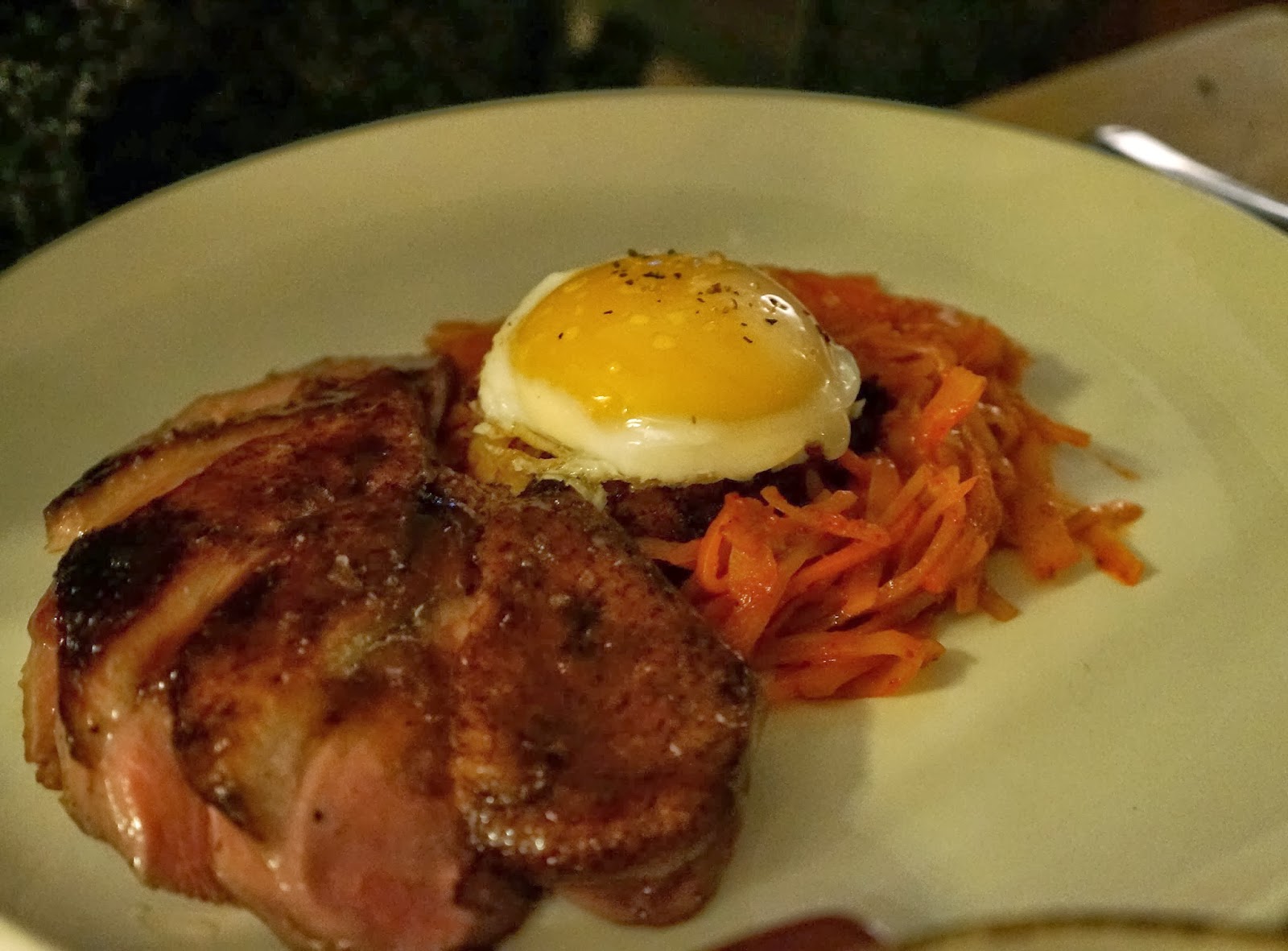 This may be the best smoked duck I have ever tasted. The smokiness of the duck was initially subtle, but increasingly noticeable as the flavours are released with more chew. The smokey aroma remained lingering in the background when the gamey taste from the scarlet bird came through - perfectly harmonious. The flavours were remarkably well-balanced; the smoking impeccably controlled.

Again, it was the kimchi on the side that ruined it for me. On its own, Smokehouse's version of kimchi was very moreish - crunchy, spicy and tangy with pickled carrots and cabbage. But it's loud, so loud that it snatched away the delicacy of the duck and drowned its art of subtlety. That said, I just had the kimchi after the duck and everything was beautiful again. 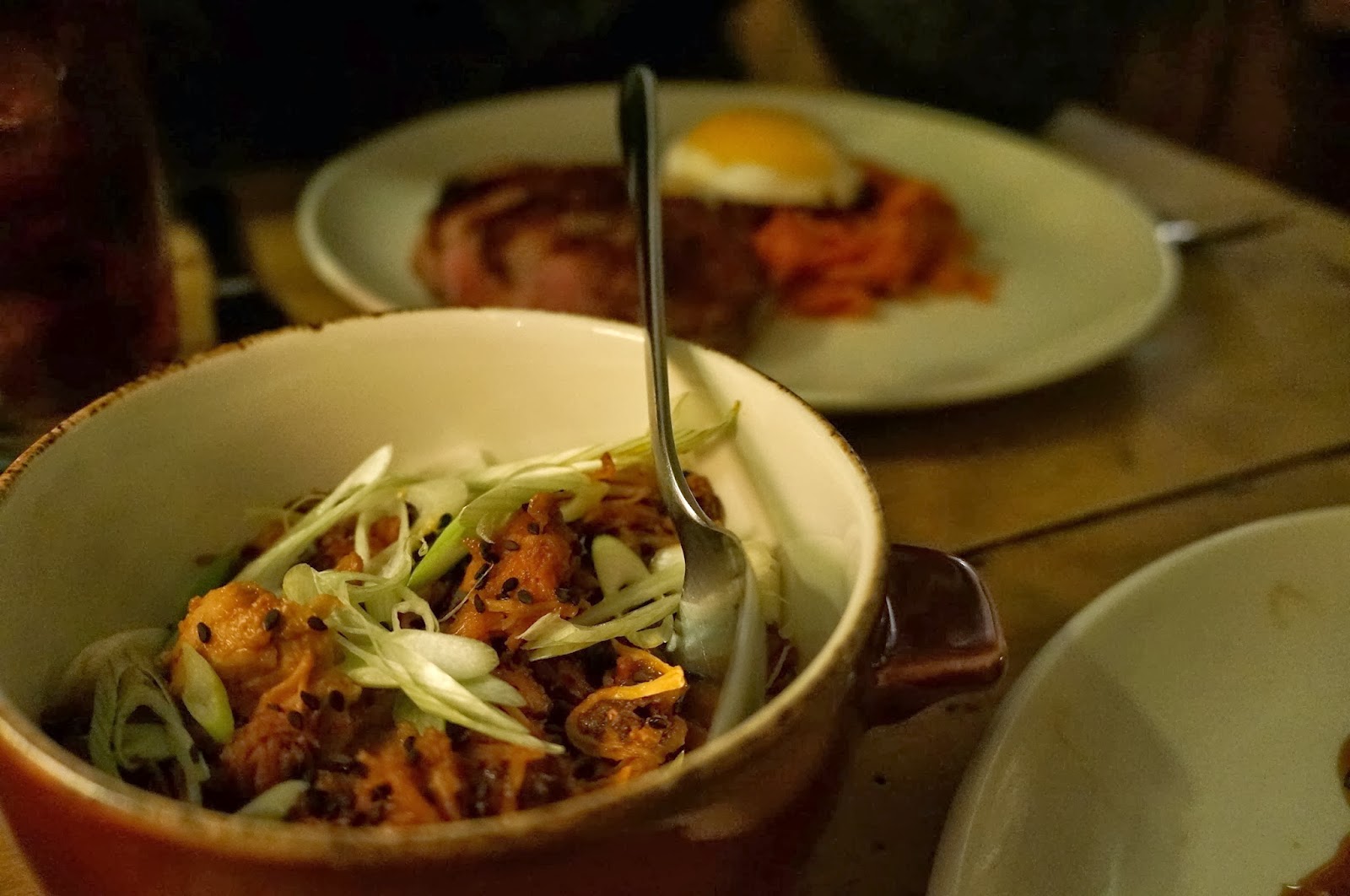 This side dish really lived up to the hype; it's simply excellent. The ultra tender pork was juicy and absolutely smashed with flavours, seasoning was spot on with some heat and kick as an undertone. Loved it.

There were fits of laughter and bursts of tears from the woman now; and a look of resignation on the man's face. 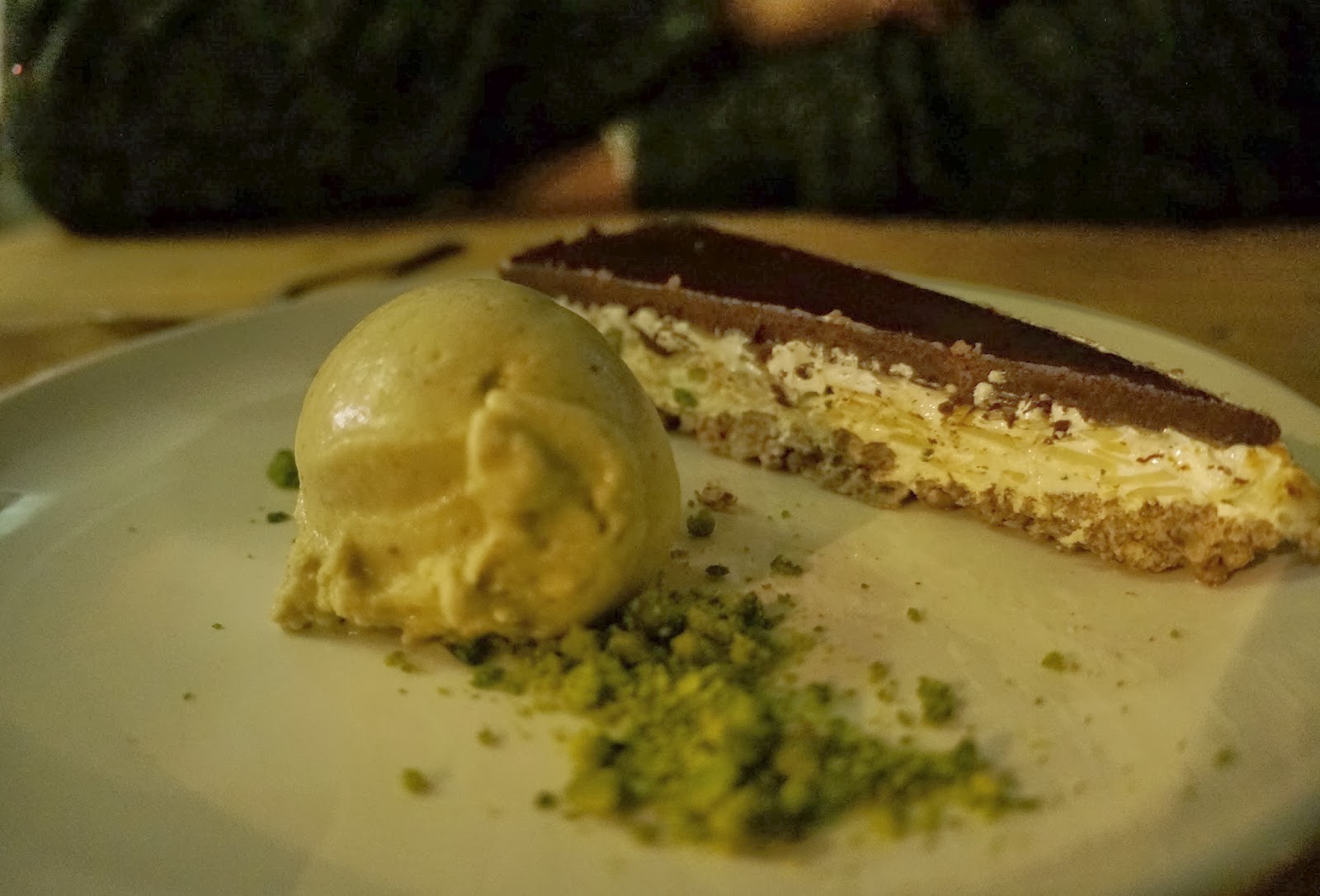 I was slightly upset when I was told the Friday Pie was gone, like off-the-menu gone. But our server assured us the Double D tart was better. The Double Decker variation did not disappoint; the tart was made up of chewy nougat packed with crushed nuts , layered with rice crispies and a thick layer of chocolate ganache - deeply satisfying.

In general I really enjoyed my evening at Smokehouse. Individually I thought every item on the dishes was made with great skills and precision, it was just annoying that they didn't all come together as dishes. It worked out okay for me, I can adapt to that. That said I believe this is something the kitchen and chef need to address if they want to be known as a great restaurant, otherwise what was the point of moving away from Pitt Cue?

You may also like: The Harwood Arms, St Johns Bread and Wine, Princess of Shoreditch
at 04:35 1 comment: