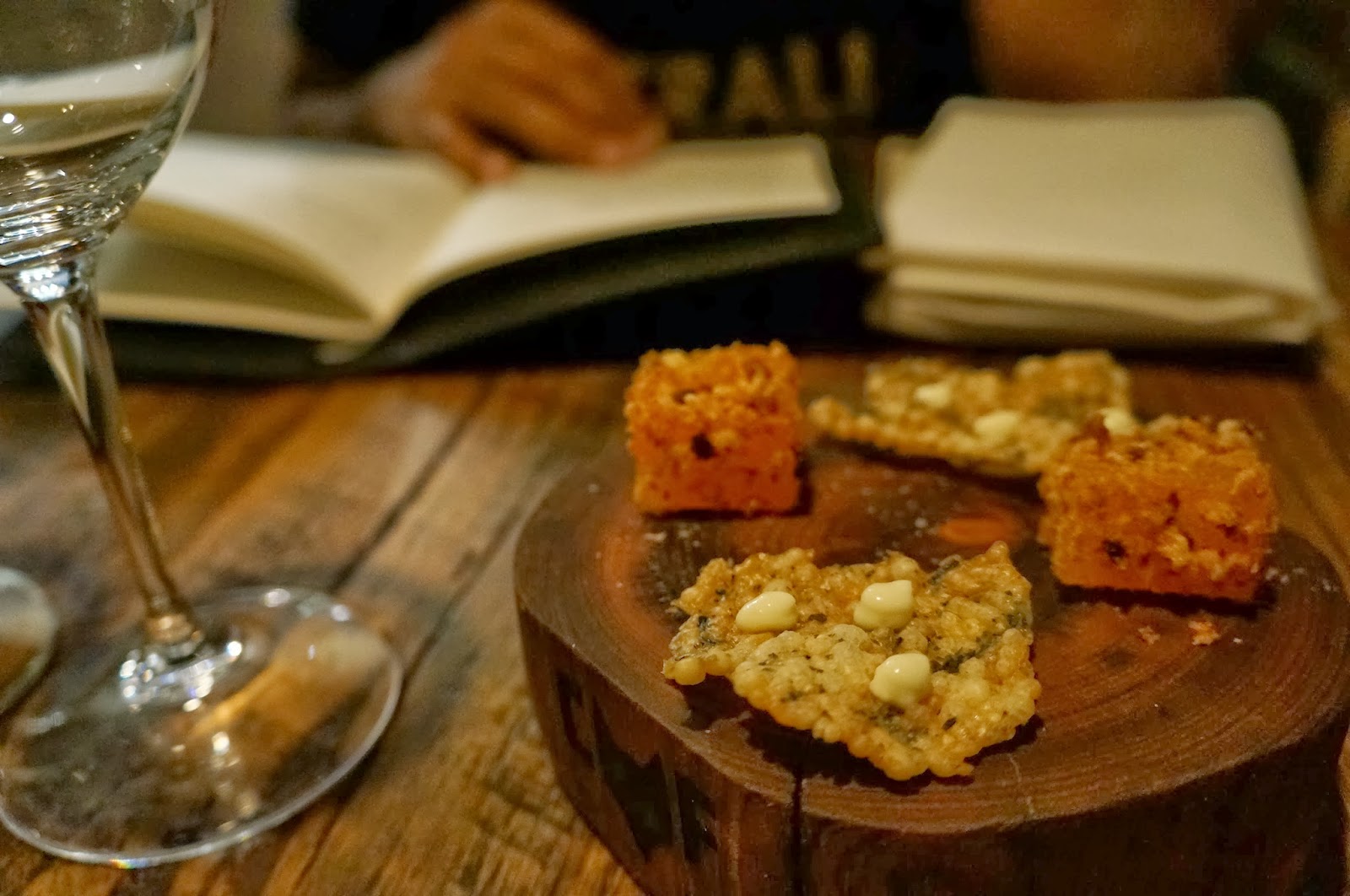 Let me get this out of the way - We really did not enjoy our dinner at Saint Crispin. Out of my short-list of restaurants in Melbourne, I went with Saint Crispin because it was the bigger project of Estelle Bar & Restaurant, which earned raving reviews from fellow bloggers.

After a beautiful day at Yarra Valley with Mister driving me around wineries and Healsville to play with adorable koalas, I was really looking forward to some decent Modern Australian cooking. It's been a long day so we weren't set for the 5-course tasting menu, instead we went with the a la carte with a couple of nibbles to get things going. Mister is a fan of pork crackling; but these were extremely disappointing.

The seasoning was sprinkled on top of the crackling, which was rather pointless. When we tried to bite into the hard sheet of skin, or break it into smaller pieces, all the seasoning bounced off and landed on our faces, leaving the crackling absolutely tasteless and our faces plastered with herbs and salts. The texture was a miserable failure too; it wasn't crispy or brittle, the skin was coated with a layer of hardened grease that required tearing apart and left the most unpleasant mouthfeel. So all in all it was a bowl of deep-fried polystyrene.

But that wasn't the worst of it - it was our server's reaction that seriously pissed me off. She obviously noticed we left the colossal pile untouched and we pointed out we didn't enjoy it despite her recommendation. She just nodded and "oh" and left - clearly didn't give a toss. I was on a mission to slurp as many oysters as my stomach could hold. These mini oysters were quite strong in minerals with a slight crisp to them, though not as plump or creamy as I anticipated. They weren't served cold either, more at room temperature and that's kind of worrying. 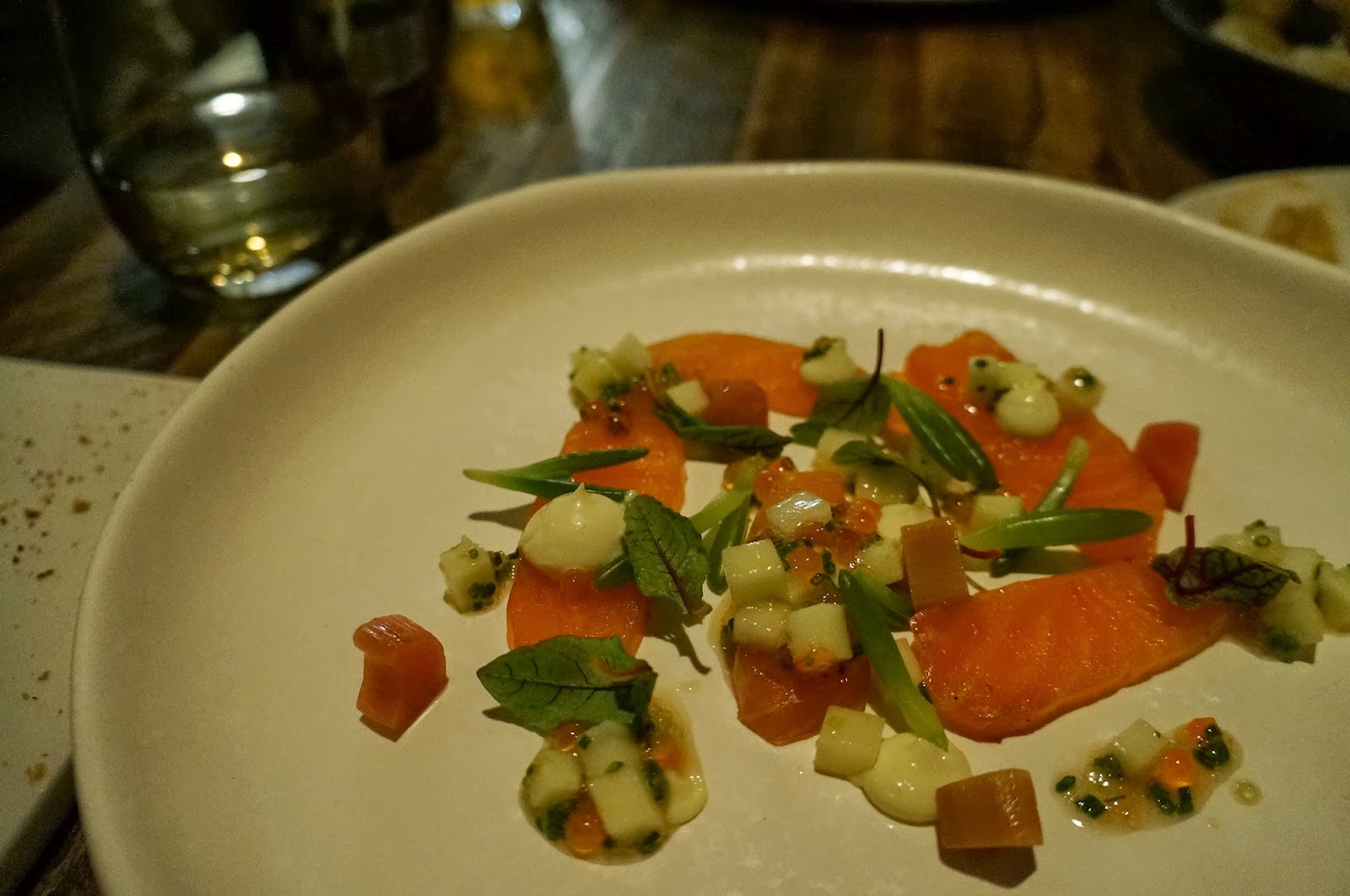 The salmon came as sashimi, smoked oyster in the form of emulsion with diced vegetable. It was a good dish; the sashimi was at the right thickness to give the smooth velvety texture, though I prefer richer and fattier cuts. Like how it was presented, the flavours were quite disjointed and it was lacking something to bring it all together. A modern starter nonetheless. 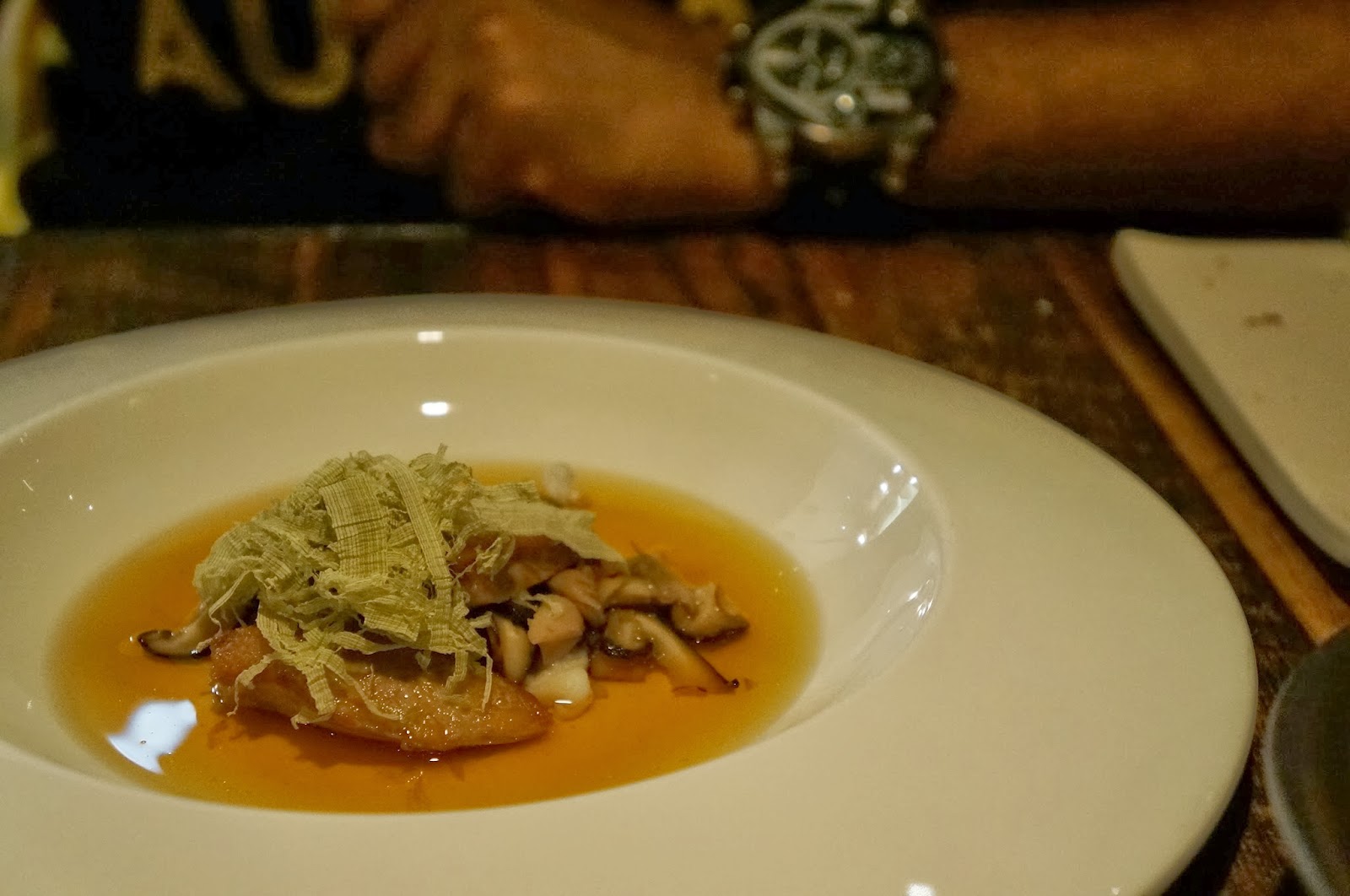 I think Mister made better choices from the menu than I did. The tiny morsel of quail was cooked to perfection with crispy skin and soft, succulent muscles. The clear kombu broth was clean and savoury, complimented very well with the juicy mushrooms, A well-balanced, delicate dish with a tad of Japanese influence, I only wish it was an adult-portion. 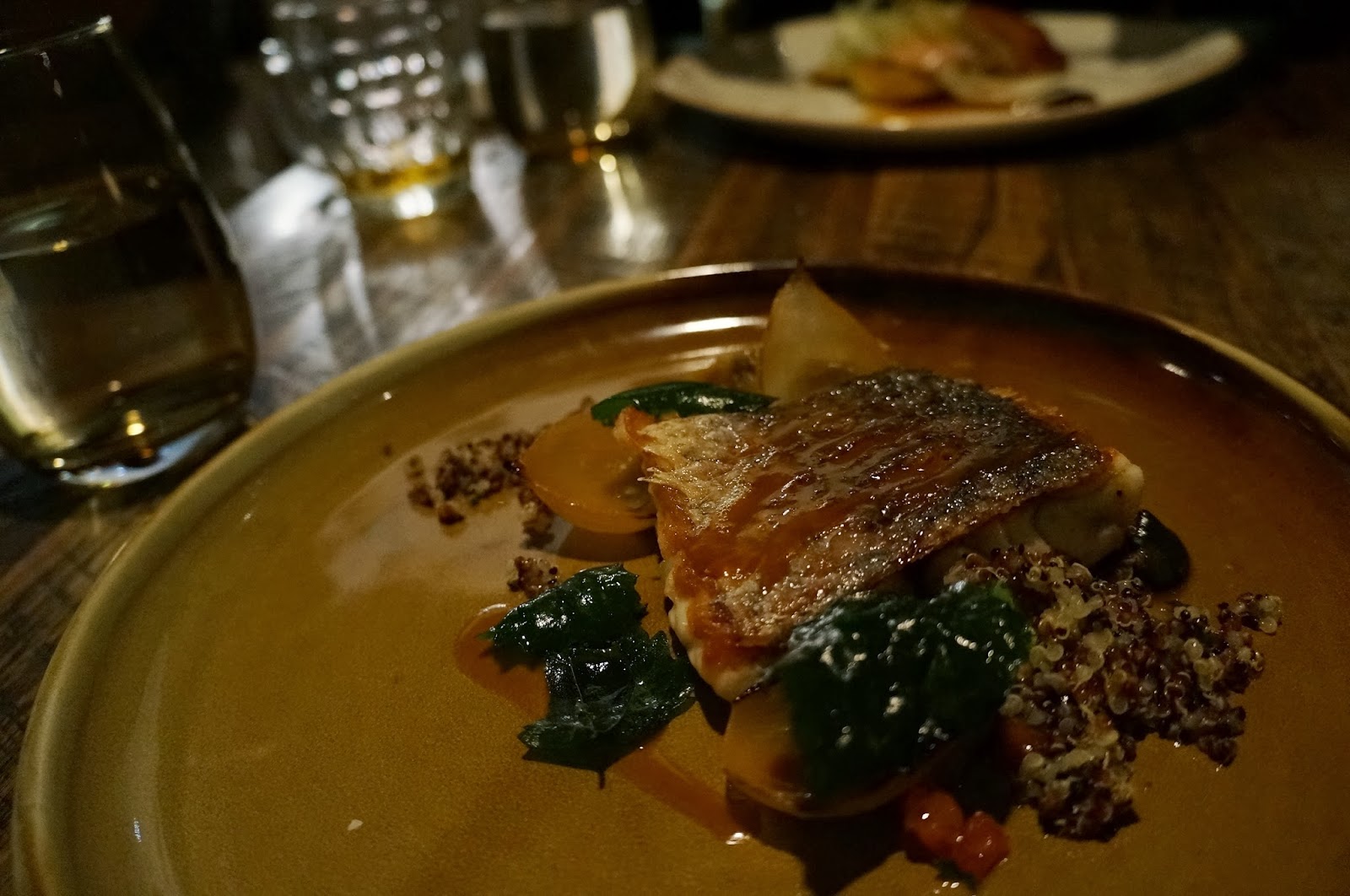 The texture of Barramundi was fairly firm, and flavours meek seeing it's a freshwater fish. I usually prefer my fish slightly undercooked, but  the kitchen did a fair job; the skin was charred and brittle and the flesh was soft and flaky. Unfortunately the ensemble of the dish was a complete failure. The ball of smoked eggplant puree was extremely salty and overpowering, so much so that it drowned out the anticipated subtle sweetness of the sea urchin sauce. The grilled tomatoes was unpleasantly watery, and its slight acidity clashed spectacularly with the eggplants. It was just a plate of disaster. 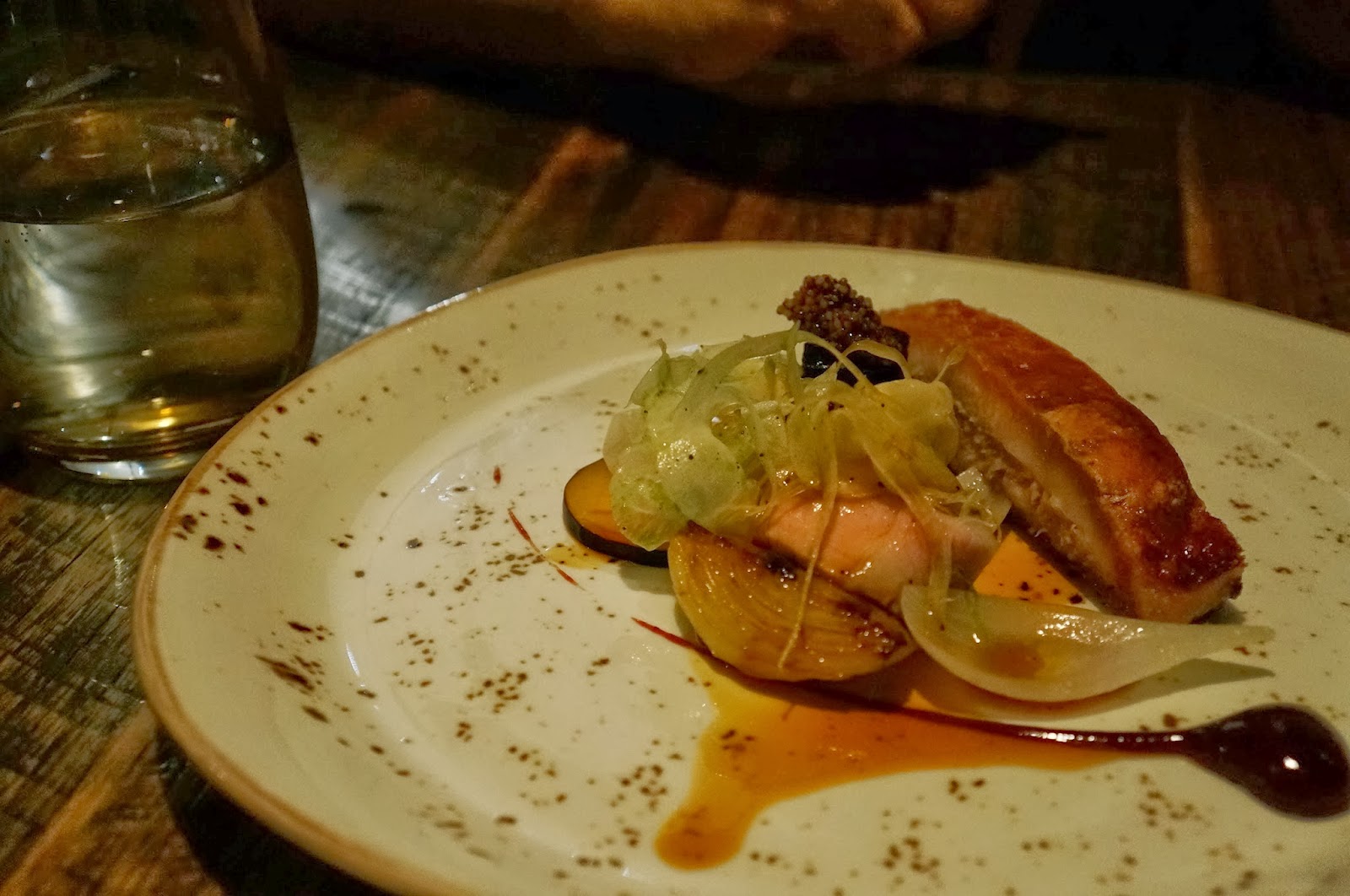 Again, Mister made a better choice of mains than I did. I thought the slice of pork was roasted beautifully, the meat was tender and moist, topped with a strong and crispy crackling. That said the kitchen couldn't have gone easier with the salt, as the accompaniments already carried strong flavours.

We didn't stay for dessert - frankly we couldn't wait to get out of Saint Crispin. Service was appalling. The wait between our starters and mains was an absurd 45 minutes, and I could see why from where I sat: the kitchen was cooking in batches. Engagement from our servers was minimum; very little introduction to the menu, limited knowledge when I asked about the difference in the two types of oysters, lack of interest in general. To top it all off, we pretty much had to eat in a furnace as we were seated close to the open kitchen, the air was humid and stuffy in that part of the dining room, and I left with a pretty sweaty back.

It feels like Saint Crispin wasn't ready for the step-up from the cosy Estelle Bar; the kitchen struggled with the menu and the food wasn't quite up to standard. Unless this is what Modern Australian translates to... which I'm sure many would beg to differ.