Barnyard - Meat Worth Dying for 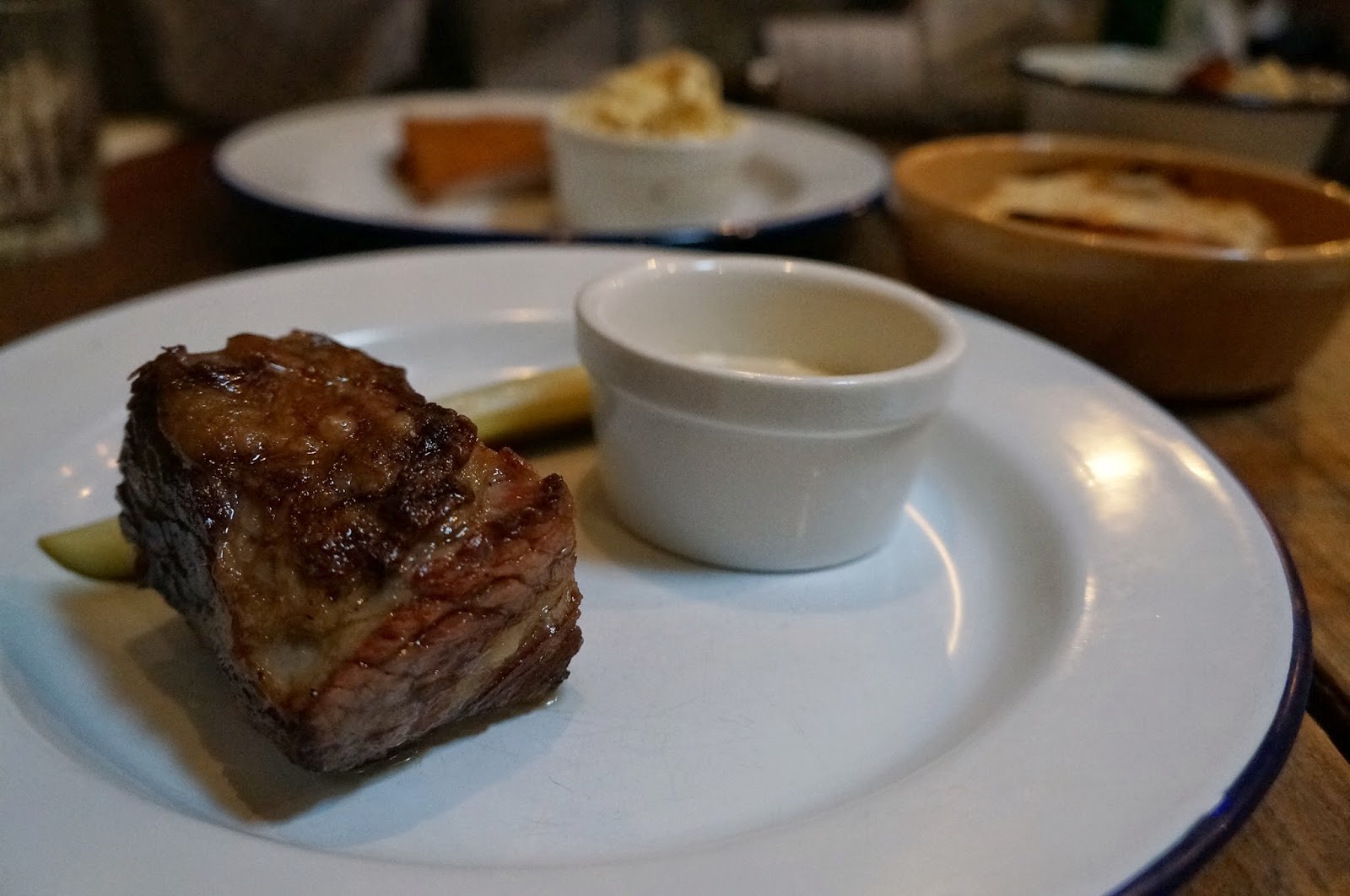 I had mixed feelings for Dabbous; I remember loving the creativity and boldness of the dishes, but then not all of them bowled me over. I remember some dishes were brilliant, but not sure if it was worth the 8-month queue. Anyhow I was excited about Barnyard, and the no booking system makes it much more accessible.

The name of the restaurant kind of gives the decor away, country-shack with wooden fences and touches of shabby-chic cosiness. It was a short 20min wait at the bar when we arrived at 7 on a Monday evening, before we were seated at the mezzanine.  Despite mixed reviews, I found the entire menu quite enticing; didn't help that Mister and I were drawn to different items. As always, I had it my way:) 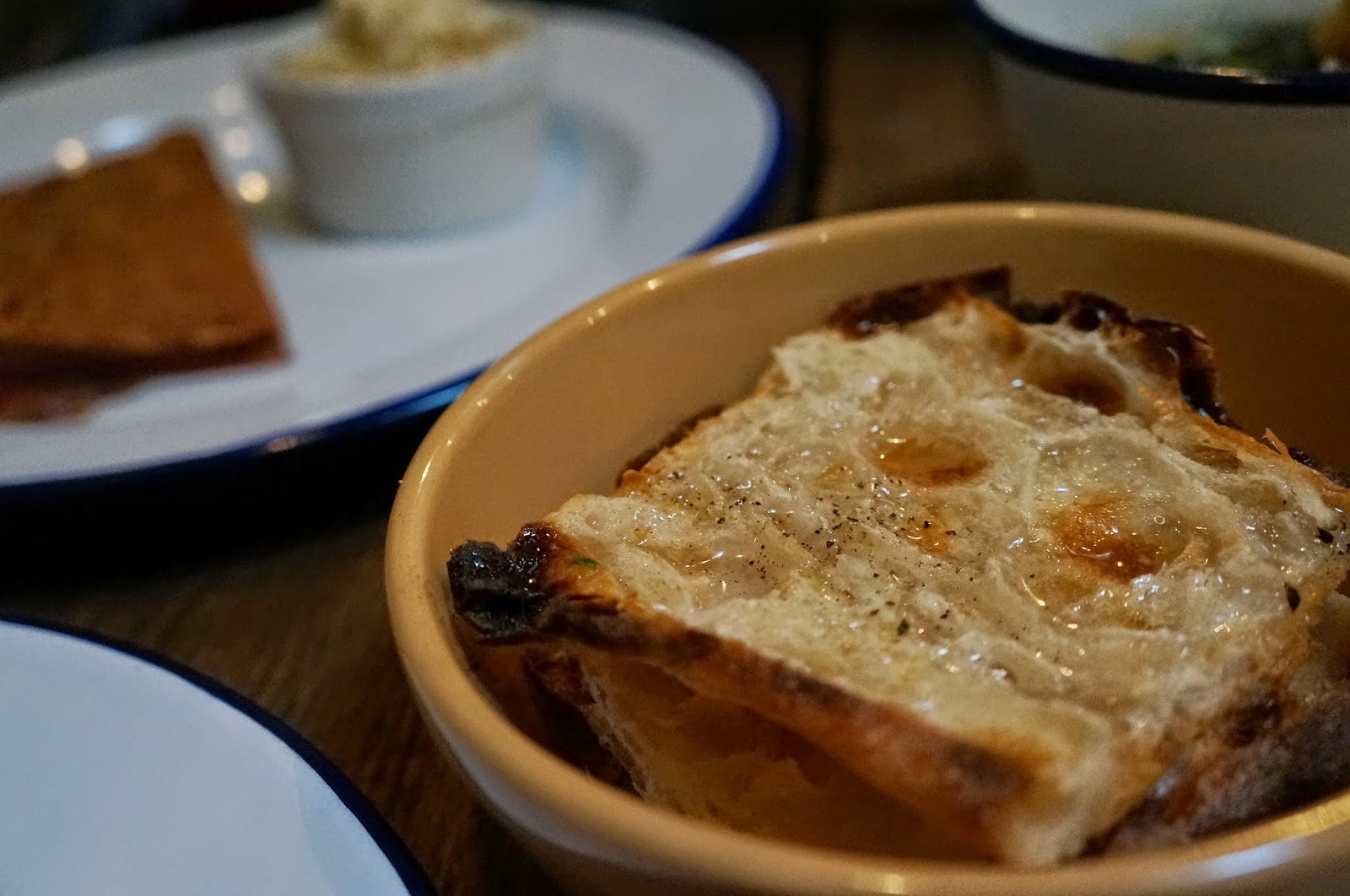 I have only heard positive things about smothering pigs fat on toast. The crispy toast had a shimmering layer of animal grease, plus a sprinkle of sea salt to enhance flavours. I was hoping for a rich, meaty fragrance but it never came. The flavours were surprisingly subtle, just a very subdued hint of nuttiness. I think I was underwhelmed, I was expecting this heart attack inflicting fat to be well worth the risk, but it was nowhere as flavoursome as chicken fat.

Lard - I'm not sure how I feel about it; It's known to be the bad and evil... but... is it really? Or just a marketing myth? I have stopped eating margarine since I learnt it's practically polystyrene; I use butter, simply it's tastier and healthier. But lard is different, it makes people shudder and wince at the thought of smearing it on our bread. I dug a little deeper, compared its mono-fats and nutrition value to hydrogenated rubbish, turns out lard is better than butter in terms of good cholesterol and vitamins. I won't bore you with the science and figures, but in short, the supermarket lards are untouchable, they are the same processed rubbish as margarine; however real lard from healthy pigs are good. That said I would stick to quality butter on a day-to-day diet. 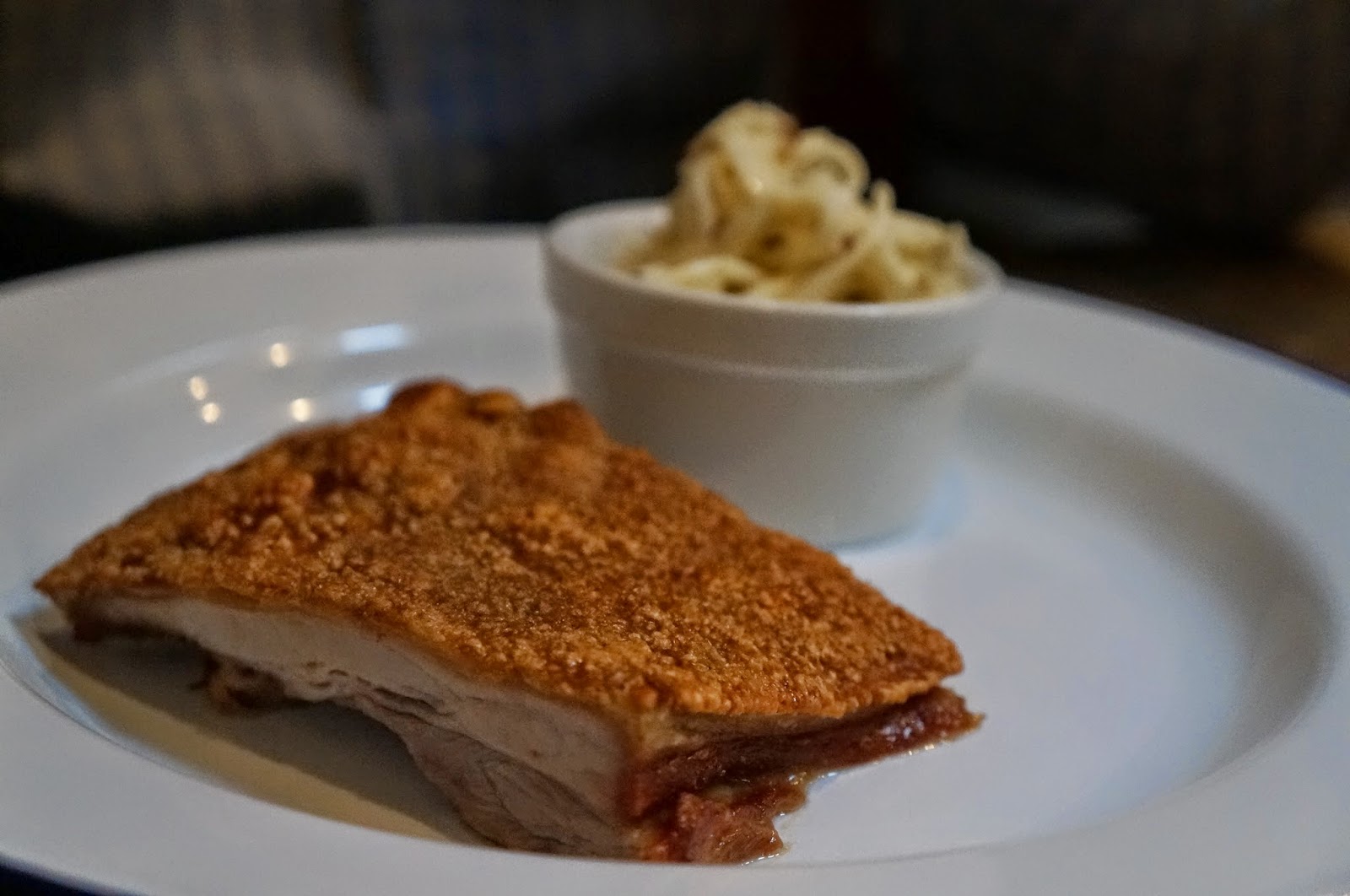 The skin on this small slab of pork was roasted to incredible crispiness; it snapped into two clean pieces as I dug my knife into it to reveal the succulent lean muscles, glistening in its meat juice. The excess layer of fat had melted away, just a small strip of gelatinous structure to enhance the mouthfeel of this baby pig. Seasoning was controlled and minimal as the meat carried enough flavours itself, it was absolutely delicious.

This suckling pig died a worthy death. Of course this is what I am referring to in the title. 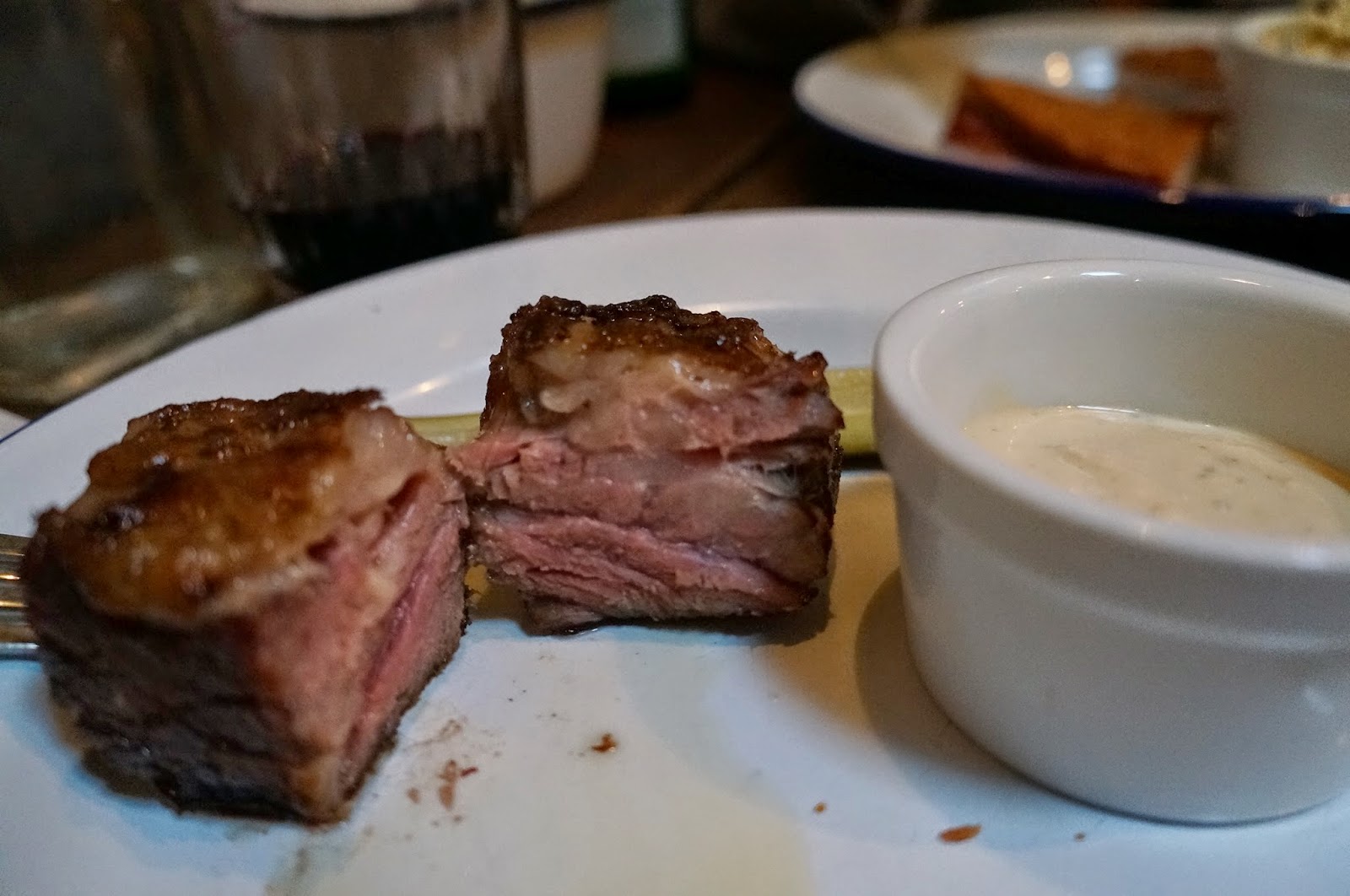 I loved the short rib from Dabbous, Barnyard's version was more or less the same. The slow-cooked rib had interweaved layers of melty tendons and fat, which simply dissolved into a mouthful of bovine delight. Plenty of meaty flavours supported by an undertone of smokiness and the gentle sweetness from the sauce - I only wish there was more of it. 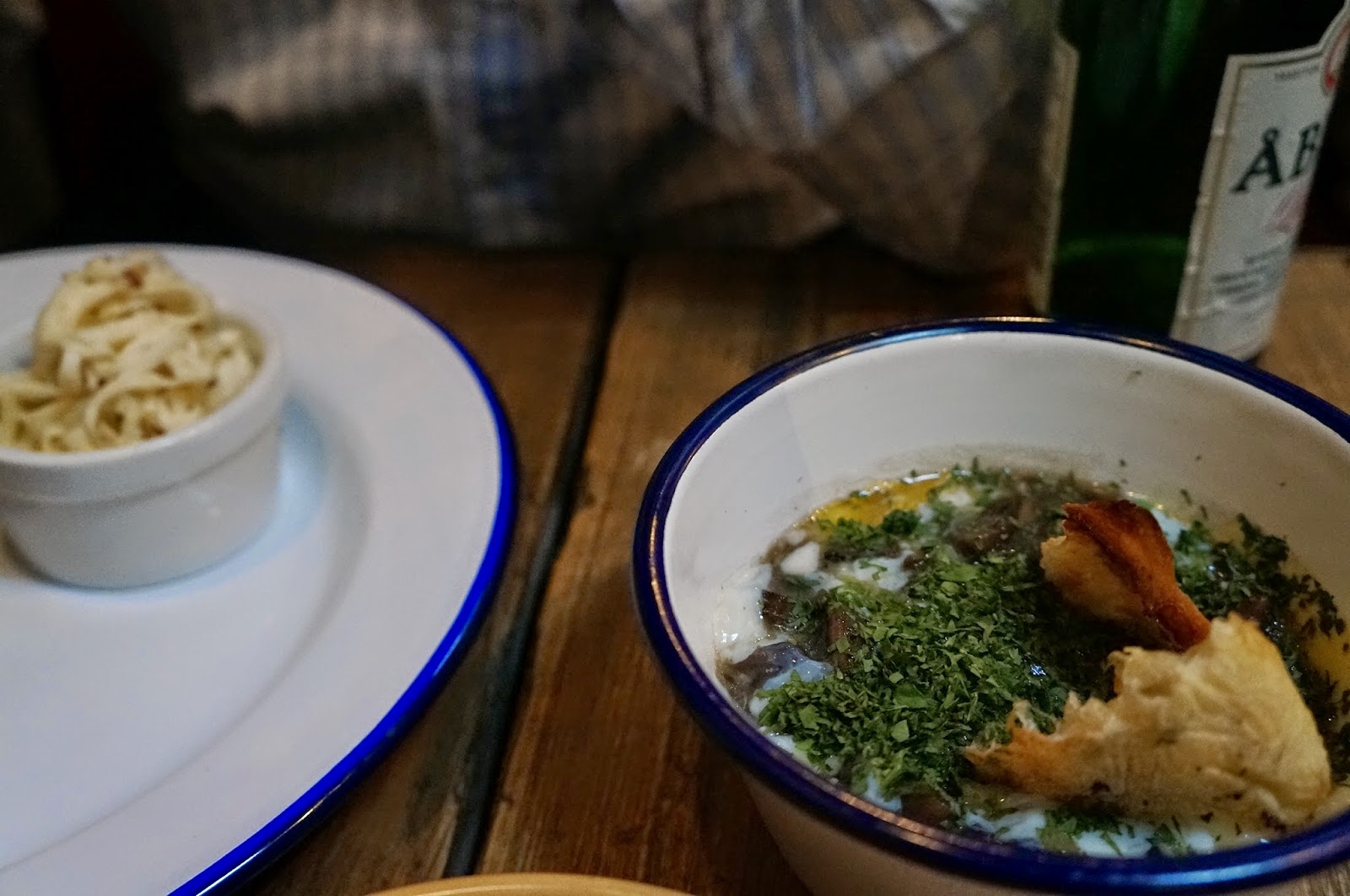 I was tossing up between this and the chicken wings in paprika as I wanted to leave space for dessert. In hindsight we could have easily devoured both. The chopped mushroom was tossed with broken semi-soft boiled egg (it's even less cooked than a soft-boiled egg), topped with a generous amount of parsley and two bits of crispy bread. A combination that could never go wrong as the juicy mushroom mingled with custardy yolk, so satisfying and comforting, yet lacked surprises. In fact I shall try making it for breakfast this weekend. 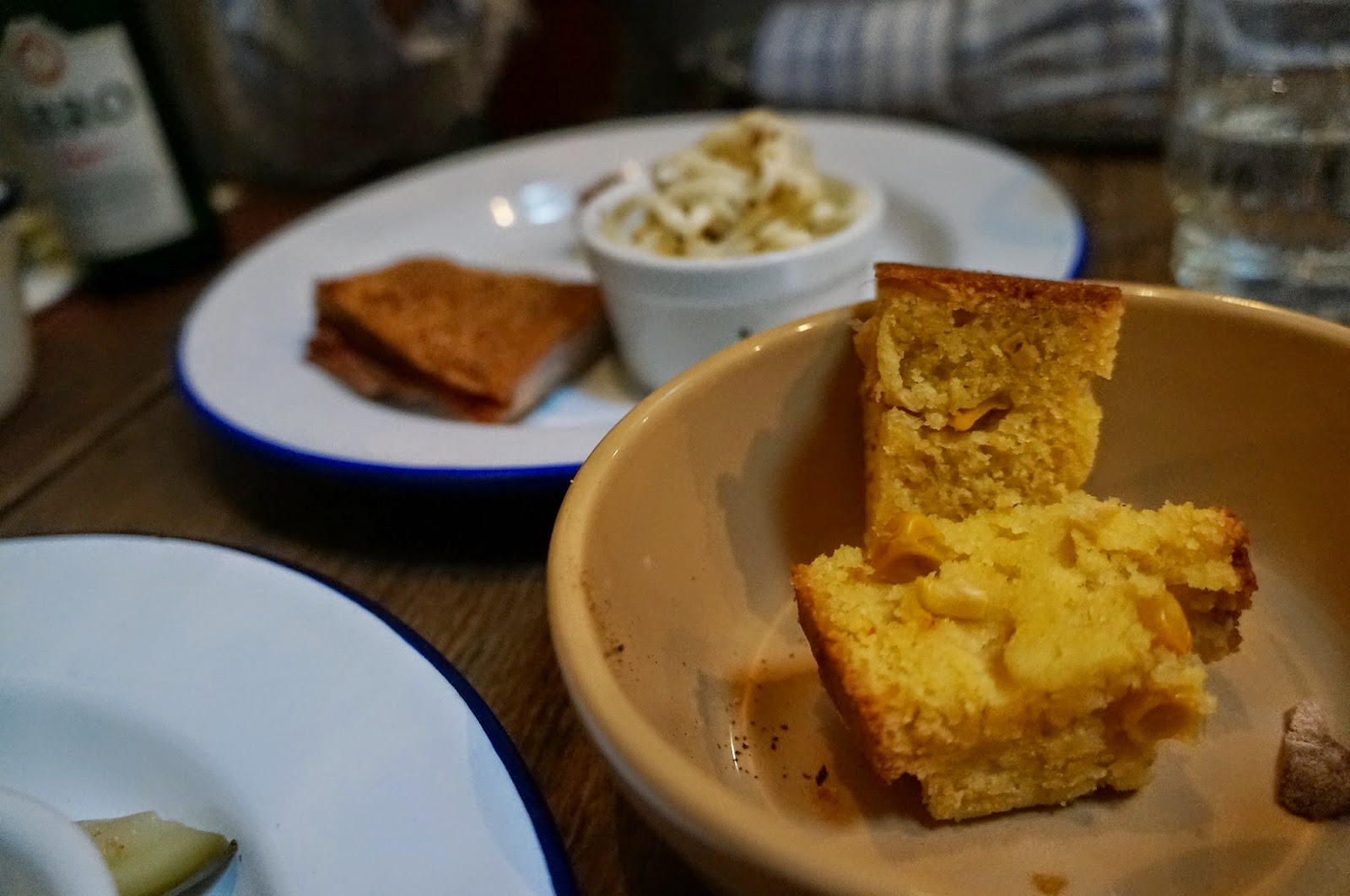 The signature paperbag with the date stamp holds 4 small cubes of corn bread. It was moist and soft, more cake-like in terms of texture, and moreishly sweet from the corn niblets. 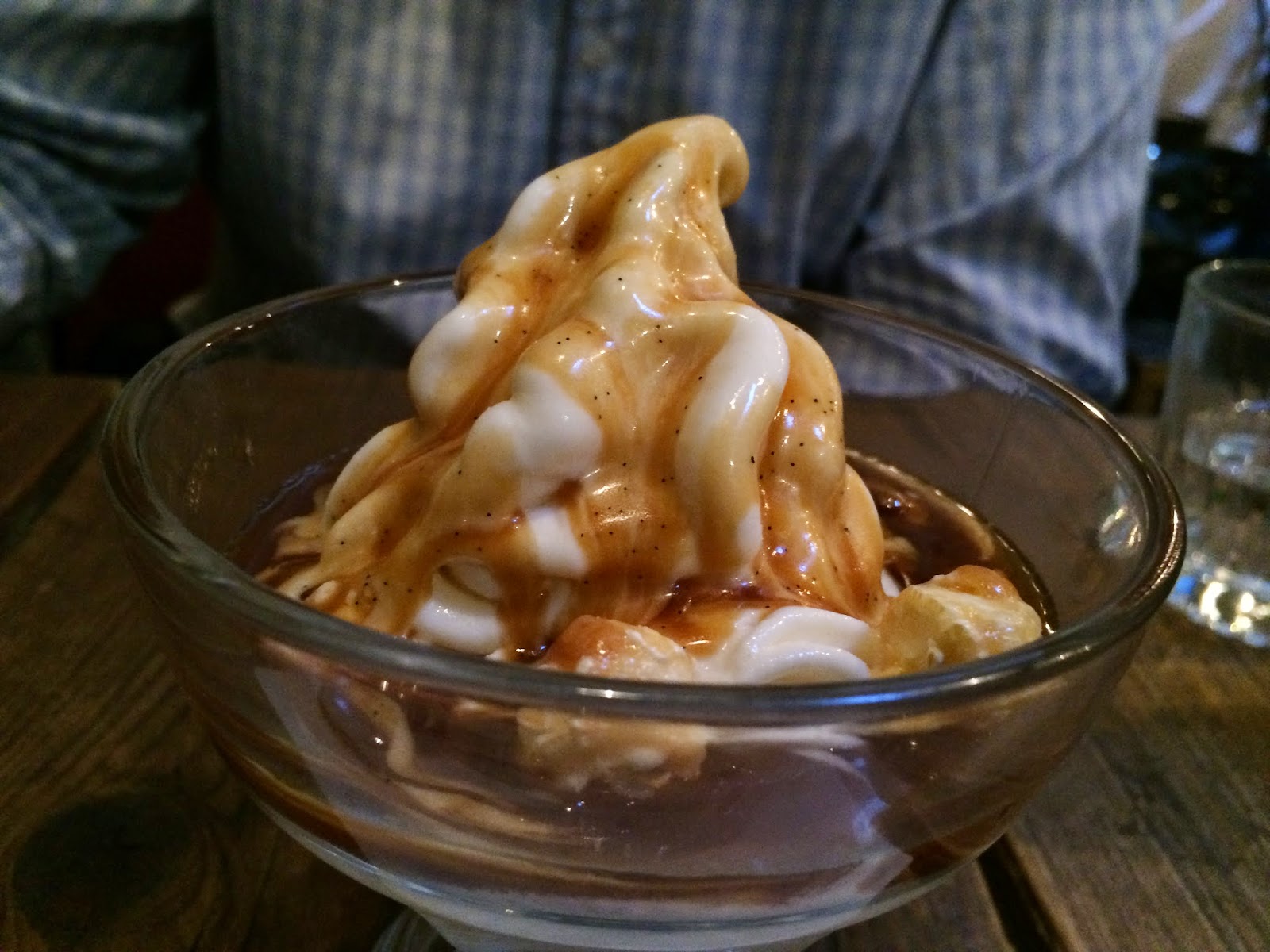 I remember the smoked fudge sauce with the waffle at Dabbous, I think they have toned the smokiness down a notch here. Still interesting and worked well with the popcorn.

I really enjoyed Barnyard. The food was solid; straight forward, comforting dishes that were perfectly executed, simply satisfying. Service was friendly, but could do better; we were brought food and beers that we didn't order, and getting their attention wasn't easy - it's no deal breaker though. As we were settling the bill, we saw the ruby-pink roast beef on toast and glazed sausage roll arriving next door. Yes - I'm coming back.