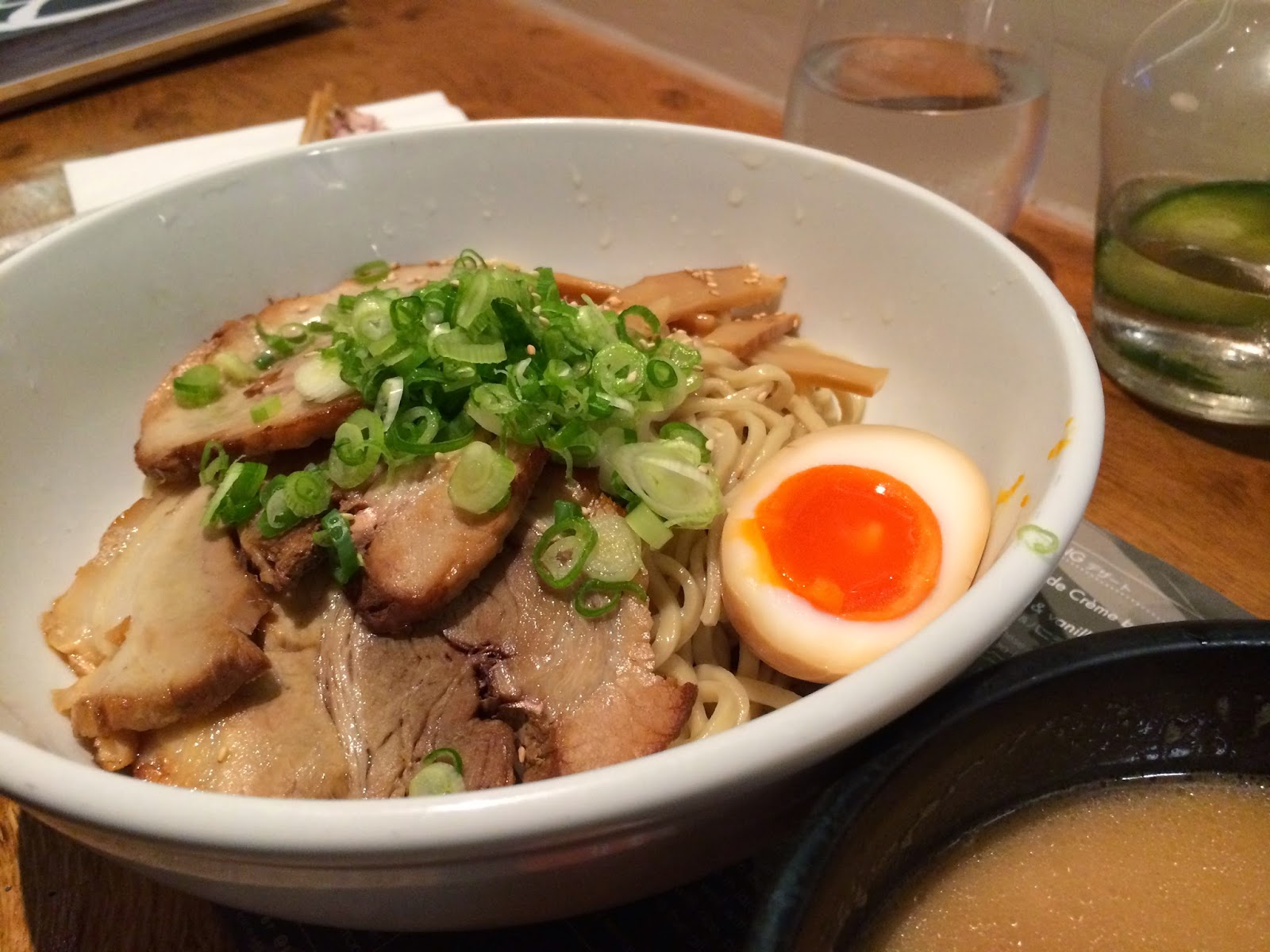 Thinking back to my first visit to Tonkotsu in Soho, I absolutely loved it. Back then ramen bars were almost non-existent in London, and my cravings for an authentic bowl of Japanese noodles were killing me. So I loved it. Then ramen bars started popping up like minons on bananas, Shoryu (now a chain giant with 4 branches), Bone Daddies (branched out to hirata Flesh & Buns), Ittenbari and more that are opening in the next couple of months; a few from Japan and one from Dubai (?!). What is going on?

I then forgot about Tonkotsu because my second visit was pretty average, the broth wasn't hot enough, the soup was too thick and the pork was too fatty. On the other hand Shoryu kind of won me over. That's why I hadn't rushed to Tonkotsu East, especially when friends didn't make a big deal out of it.

Then one evening, when I couldn't tell my muscle aches from hunger pains, and that my favourite girl was suffering from hormonal issues, we decided to seek comfort in a heart bowl of ramen in Haggerston. 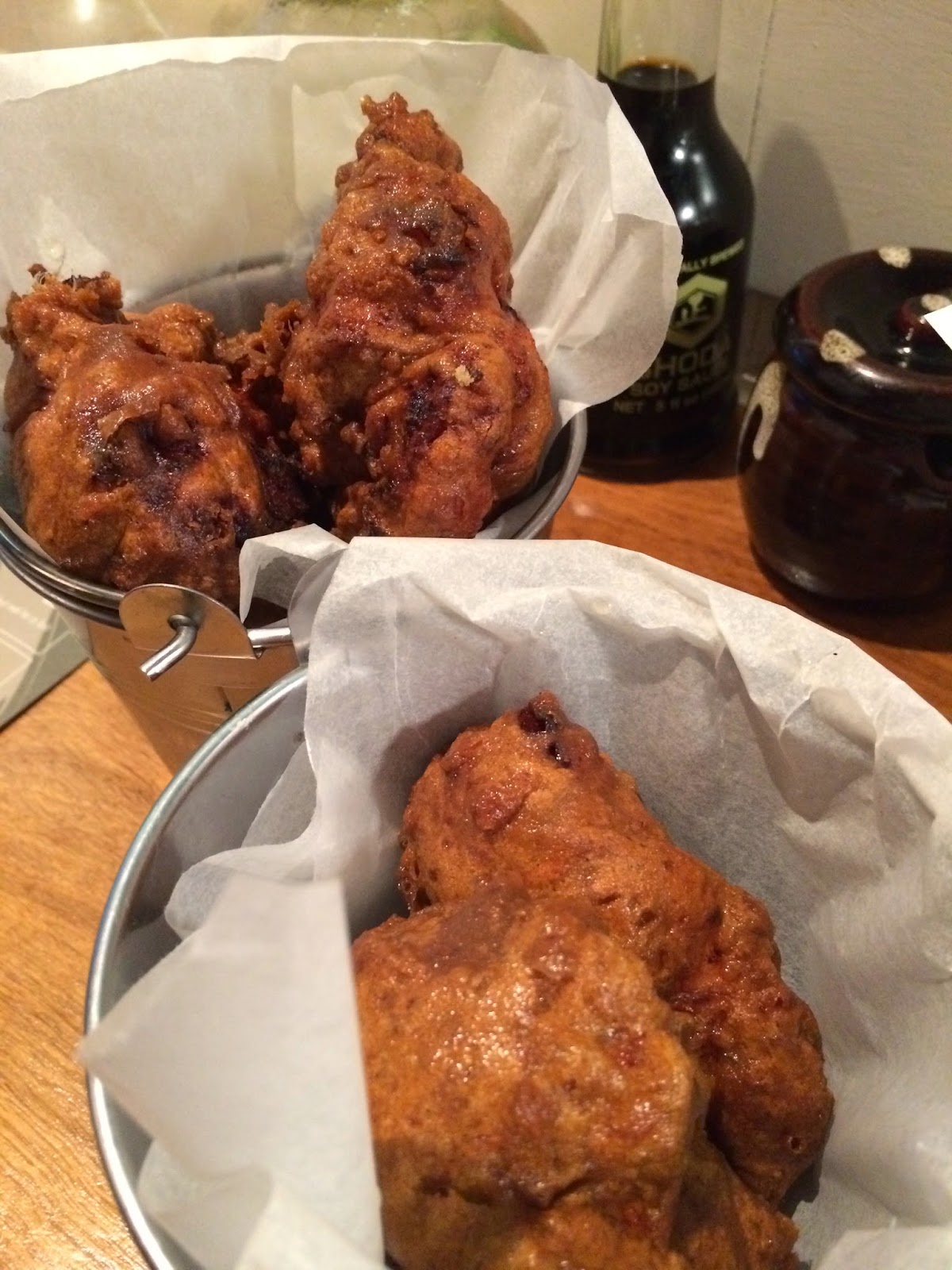 We were given 2 small buckets because they couldn't fit in one. The wings were colossal; even without the thick, curry pasted-infused batter, the wings were quite plump and meaty. I had to peel off some of the batter as thicker bits soaked up mouthfuls of grease; my mental image of my arteries clogging up were making me shudder. Unfortunately the curry flavours didn't quite infiltrate through to the meat on the wings, but the succulent and tender meat was still very enjoyable. 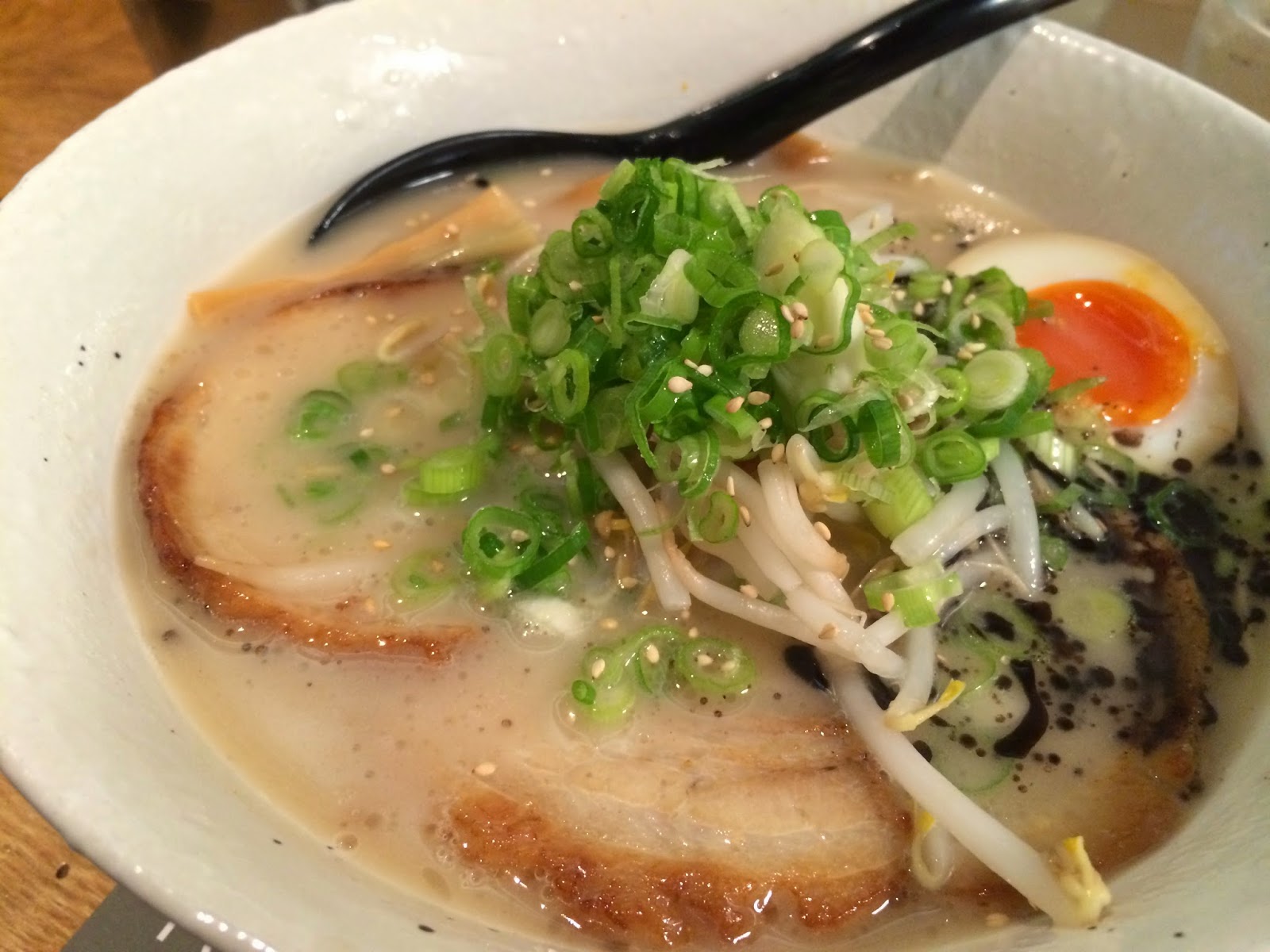 I haven't had any ramen since my trip to Osaka in February. Actually I haven't been to a Japanese restaurant in  London since Osaka. Wow.

The soup was as creamy as I remembered, and not as overly groggy as the one from Bone Daddies; it carries the richness from the long hours stewing of pork bones too. That said it was still a long way from the ones we had in Japan; while it was flavoursome, it was lacking the depth and roundness of the ones from Japan, not to mention it could be much much hotter. Good bounce from the noodles, stunning onsen egg and the fat : meat ratio on the char-siu was pretty spot on. It was a good ramen, but not amazing.

These noodles were different to ones in my Tonkotsu; thicker and flatter, more elastic perhaps because it was served cold. It came with a hot broth, which had a similar consistency to my pork bone soup, but with the addition of red miso. The flavours were more intense and savoury, if not a tad too salty. That said I prefer this broth, I think there's more structure to it. On the other hand, I'm not a fan of the dipping exercise; the soup doesn't cling onto the noodles well enough to take on the flavours, and half-cold-half hot-mouth feel doesn't sit well with me - everything just becomes lukewarm. Just not my thing.

Mary Ann finished off with a vanilla creme brulee, which was very sweet and could do with more sugar brittle.

Despite a slightly different menu to Tonkotsu Soho, I thought the two ramen bars are more or less same. If I had to choose, I'd say I prefer East because of the more laid-back vibe, the spacious arch and hence much less chaotic than the communal long tables in Soho and rushed service. But the standard of ramen is similar. While it didn't win me over as the best ramen in London, and there is nothing like the ones in Japan yet, I wouldn't mind popping back here for a casual noodle fix.