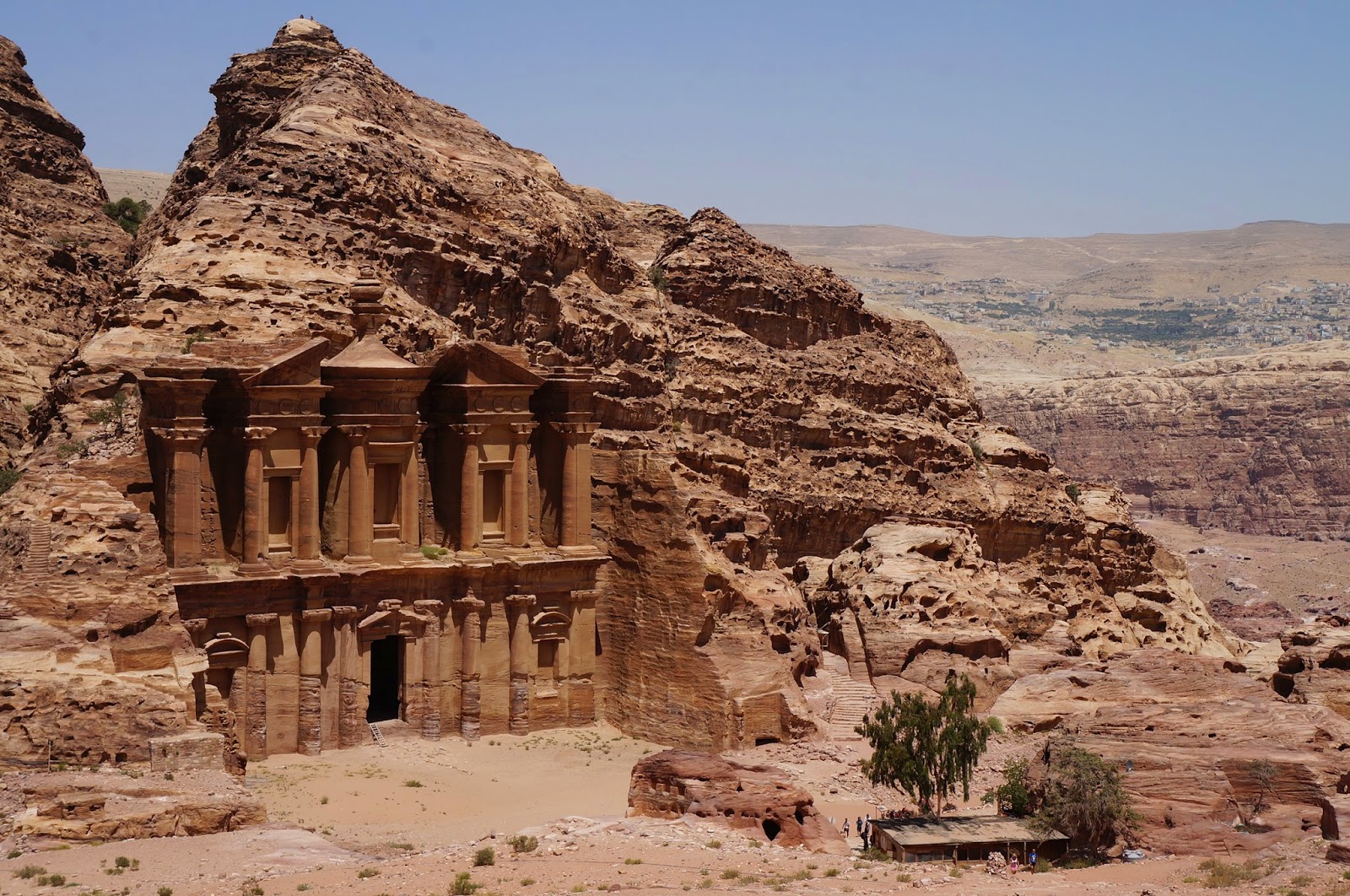 The short walk from the Israeli border was like a time tunnel that took us back by 20 years. The border control officials were friendly and welcoming as they issued our visas, but things were more worn out with a thick layer of cigarette smoke hanging in the air. There were plenty of taxis outside the terminal, a taxi tide to Aqaba city centre was 7JD. There was a board that listed standard prices for a range of destinations including Petra, Wadi Rum and Amman, which saves a lot of haggling. 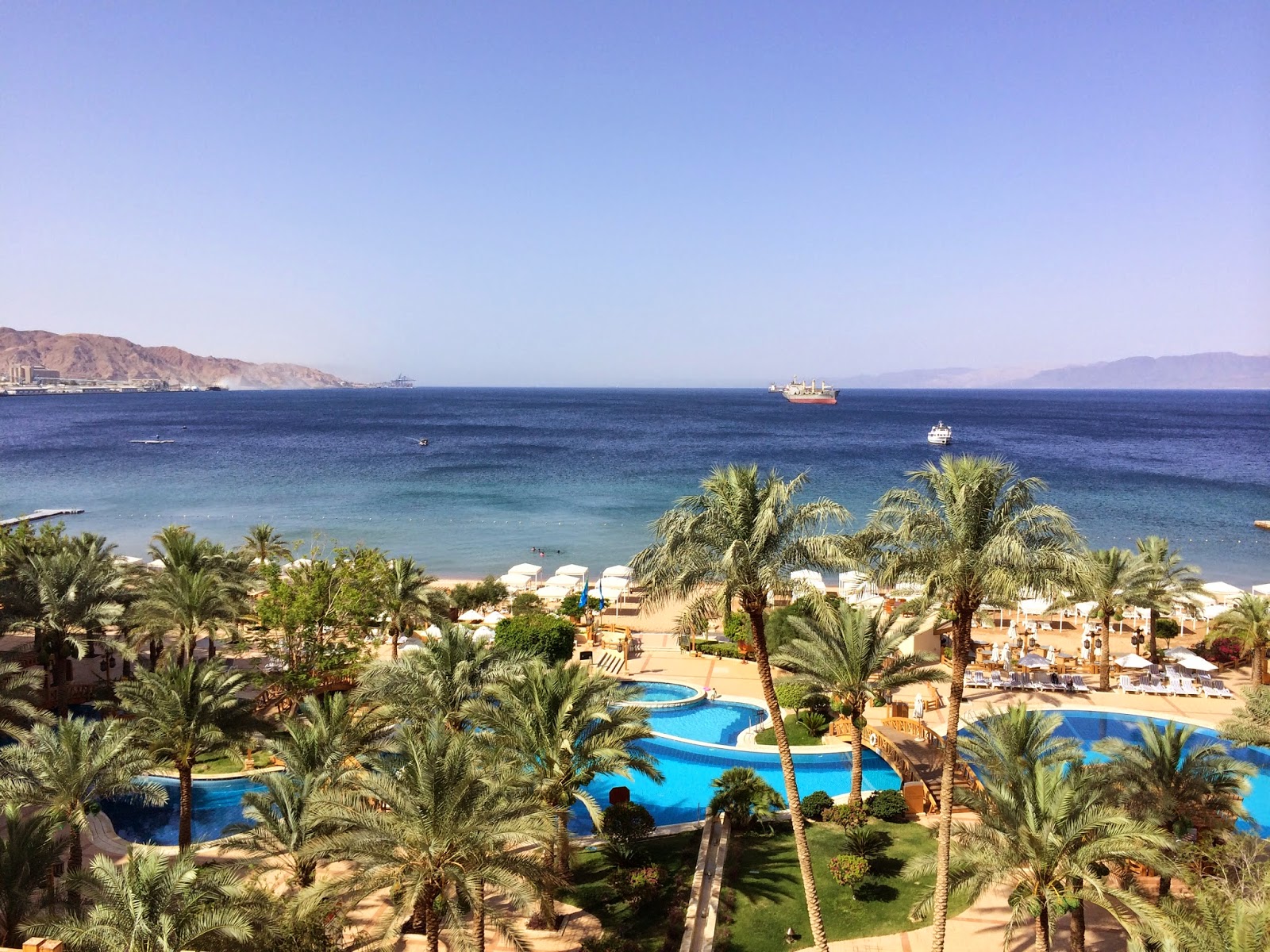 Despite being a Red Sea resort area, the conservative nature of the country did not budge. I thought it was okay to walk around in shorts and t-shirt - wrong. I was decidedly uncomfortable with the staring and constant hooting from every other car on the road. Not flattering, just downright scary. We had dinner at Ali Baba based on recommendations by fellow travellers, and it was absolutely brilliant, especially their signature fish pot! 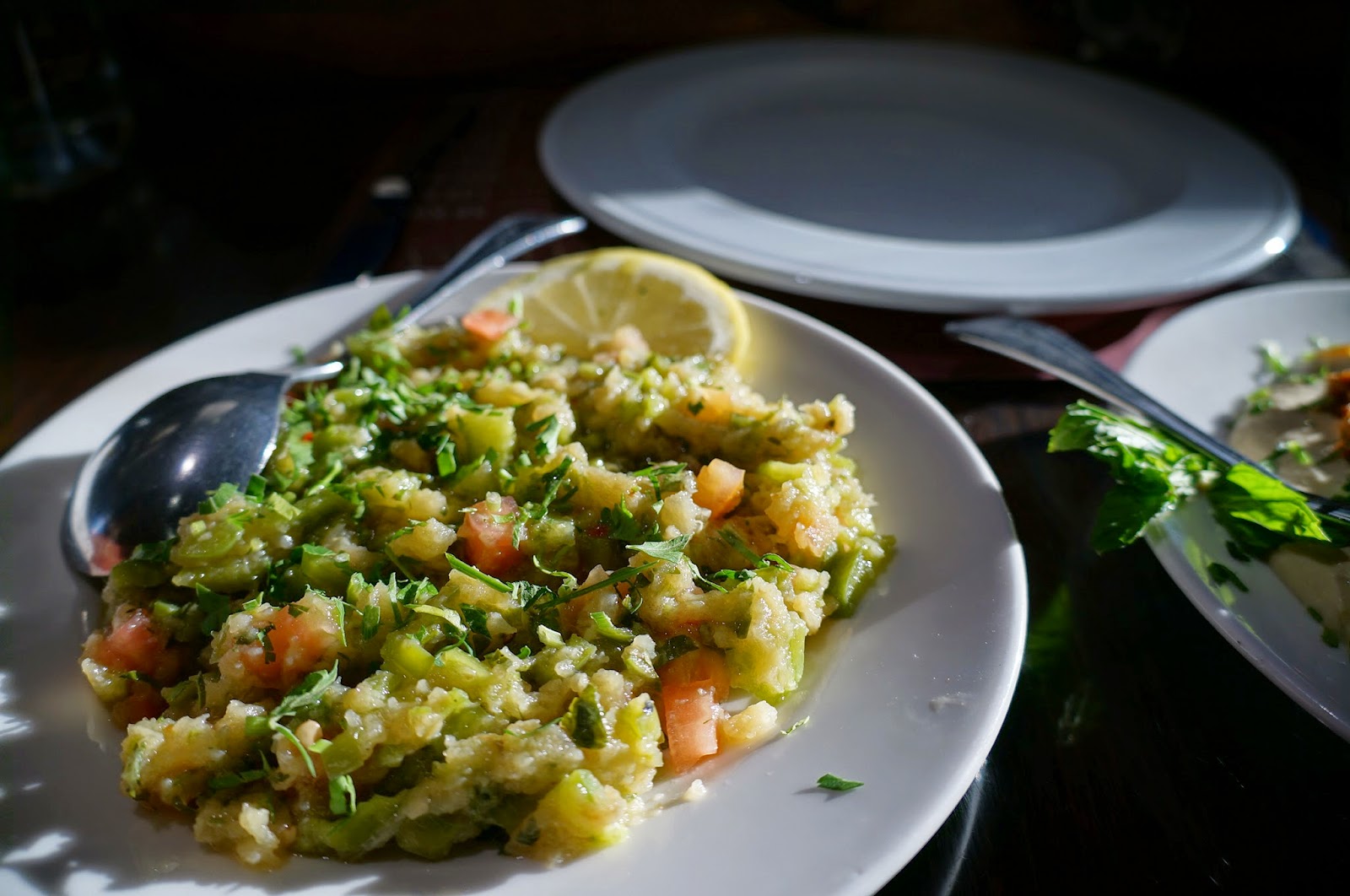 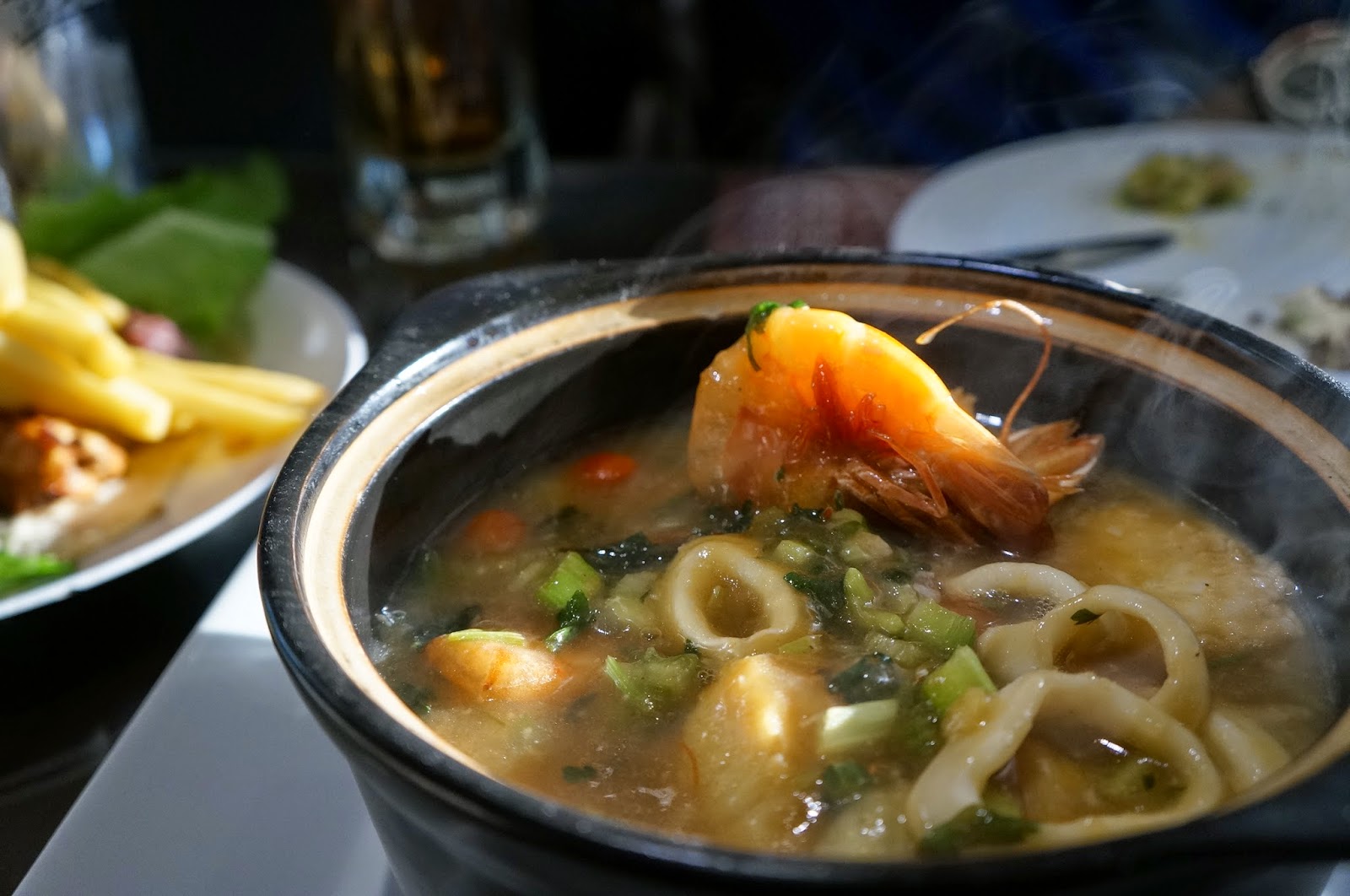 We left InterContinental for Wadi Rum by taxi the following morning,  25JD - approx 1hr drive. I do have this feeling that everyone knows everyone here. We were greeted by Salman at the Wadi Rum Visitor Centre, who took us in his truck and drove another 10mins into the Wadi Rum village, where he led us to his house, shared some tea and a light lunch before setting off our camel ride. 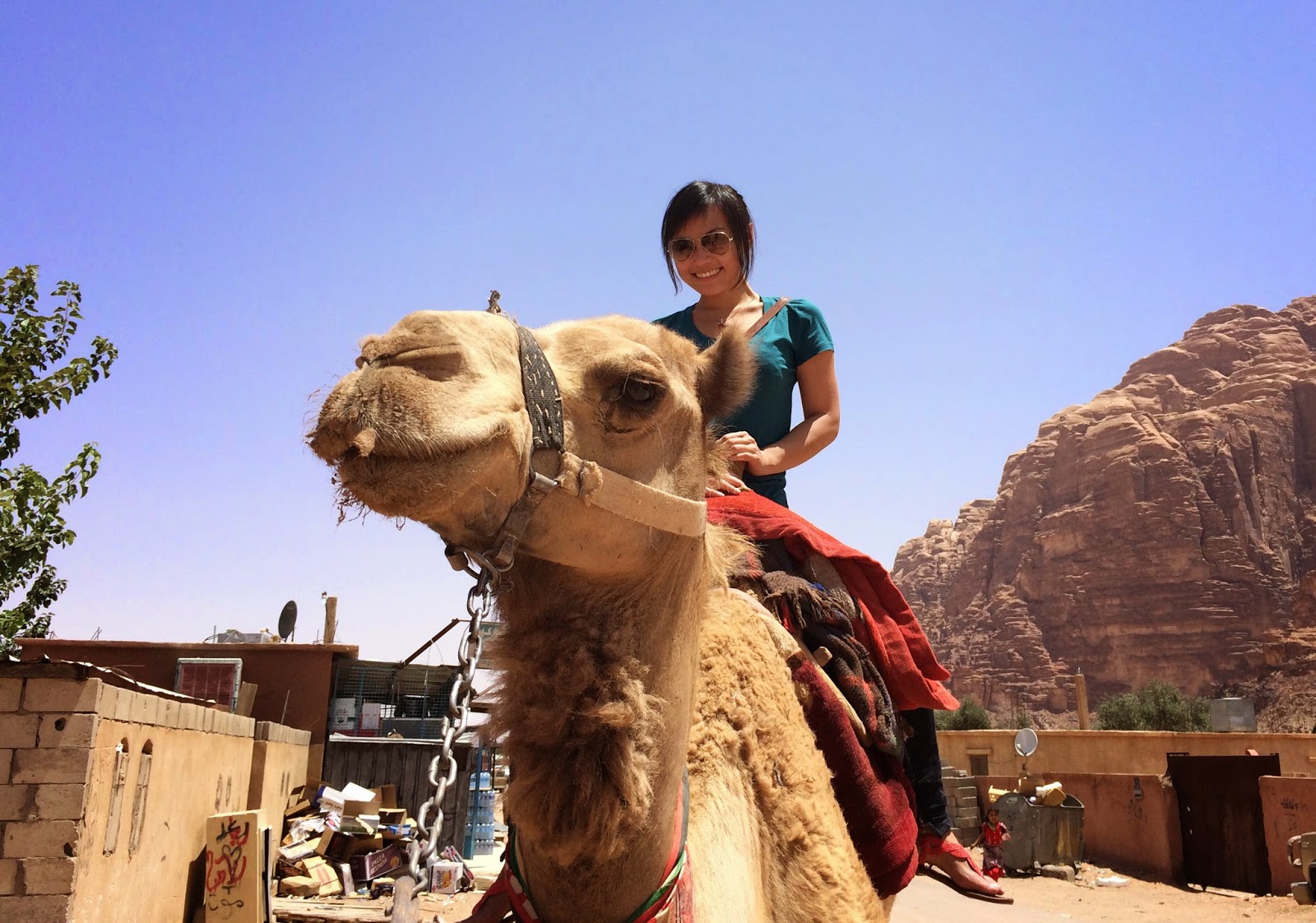 A couple of years ago I went to the Sahara and fell in love with it. Wadi Rum is very different, it's a rocky desert so instead of an ever-changing landscape of sand dunes, the sparse land were adorned by gigantic, breath-taking rock structures. It also meant there were more shades to hide from the scorching sun, and some steep valleys to explore. It's impossible to capture the vastness of the landscape and its soothing serenity. 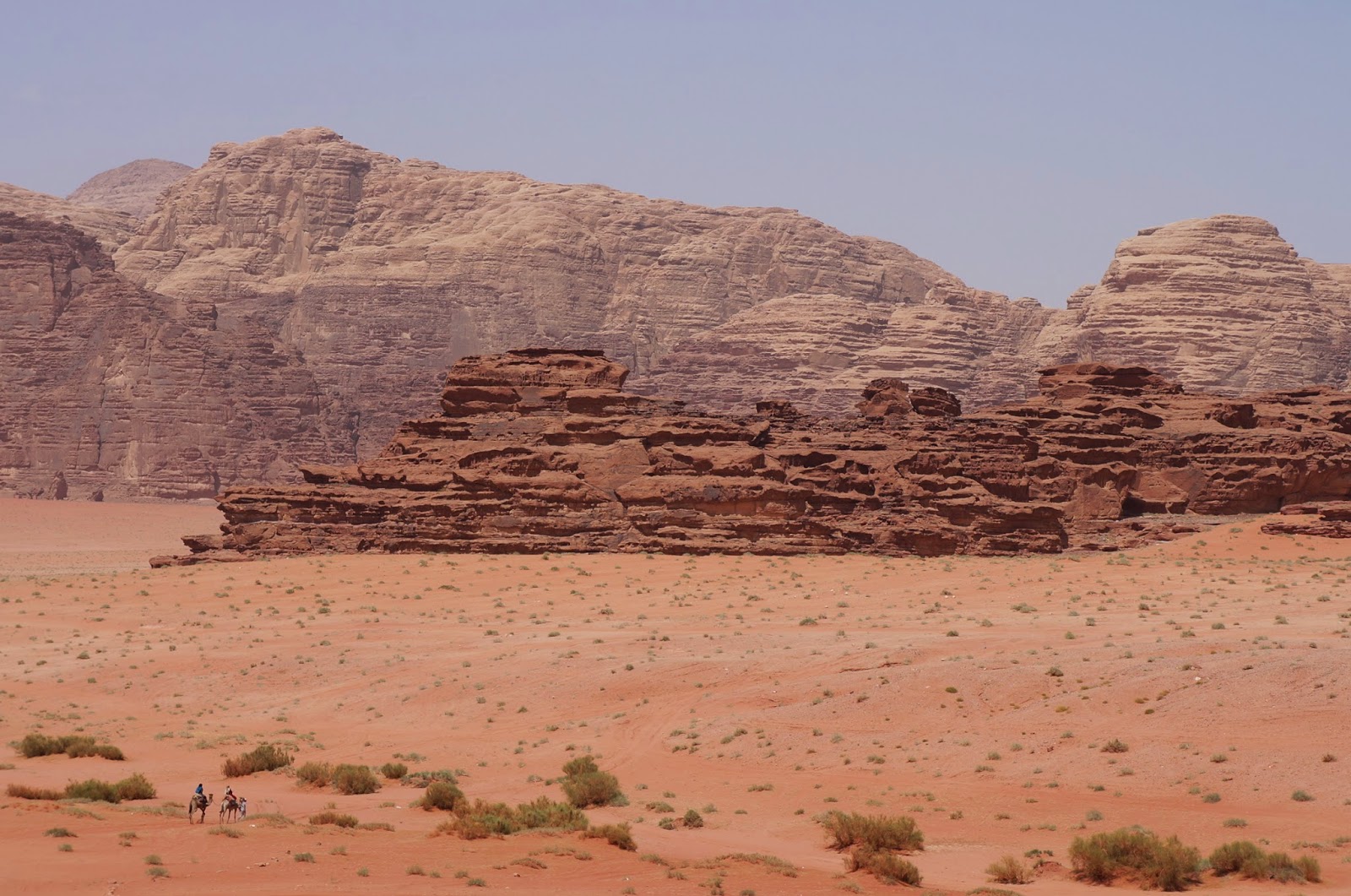 We spent a starry night in the desert in the bedouin camps, which was so much more developed than I expected. The camps in Sahara were real camps, as in tents and blankets on the sand. These camps were more like tiny cottages with beds, solar power and even toilet facilities! While the basic facilities helps, it somewhat loses the authenticity of the experience. Personally I preferred the Sahara style, where we gathered around an open fire, shared massive tagines by dim candlelight and danced the night away to their customary instruments. 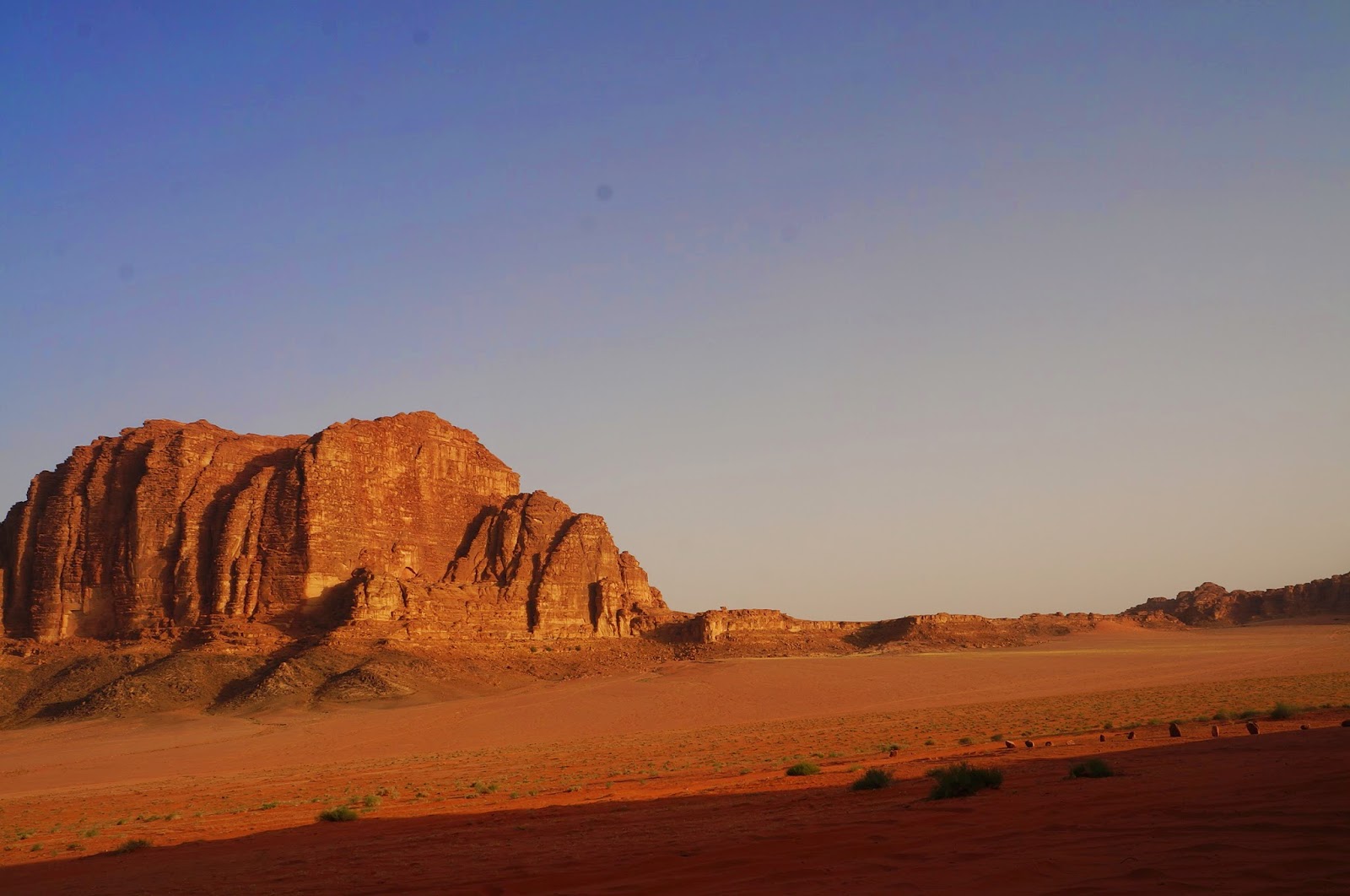 We woke at 5 to catch the sun rise. After a simple breakfast, we were taken back to the village, and then taxi to Petra, 35-40JD - 1.5hrs. Before entering Wadi Musa, our driver stopped at the top of the valley to show us Petra from atop, and if we were to walk the full distance, we are looking at 18-20km a day. I'm game. 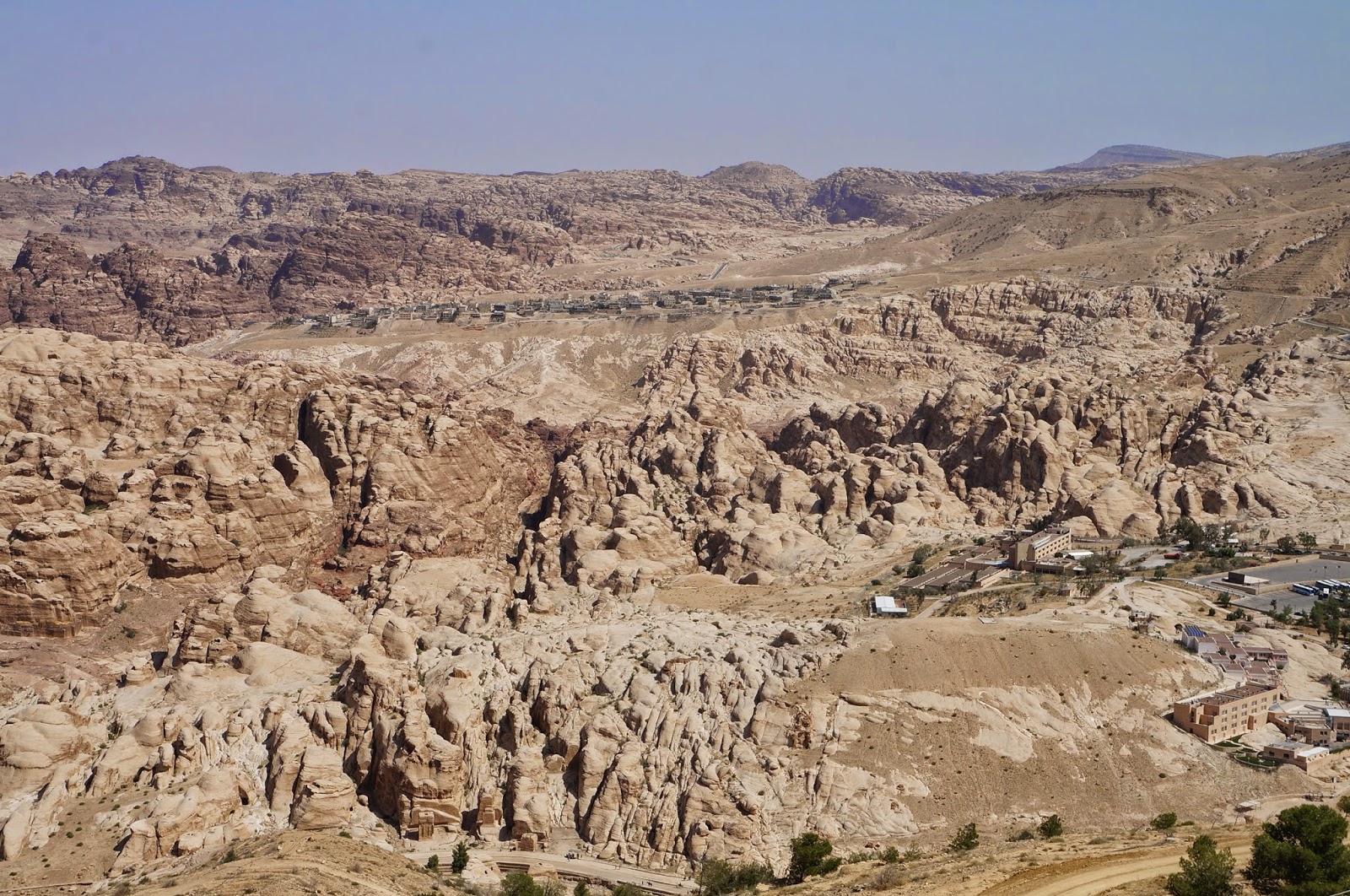 We stayed at Petra Guest House, which was the closest one could get to the entrance of Petra. In fact, the hotel Cave Bar was actually one of the tombs. A large concentration of hotels were in Wadi Musa town centre, which was 2km away from the entrance. Personally I thought our location was ideal, good restaurants nearby and very close to the bus for Amman.  We went for a 2-day access, 55JD each (bring your passport to show you are staying in Jordan). Tourists who were not staying in Jordan would be charged a whooping 90JD for one day. 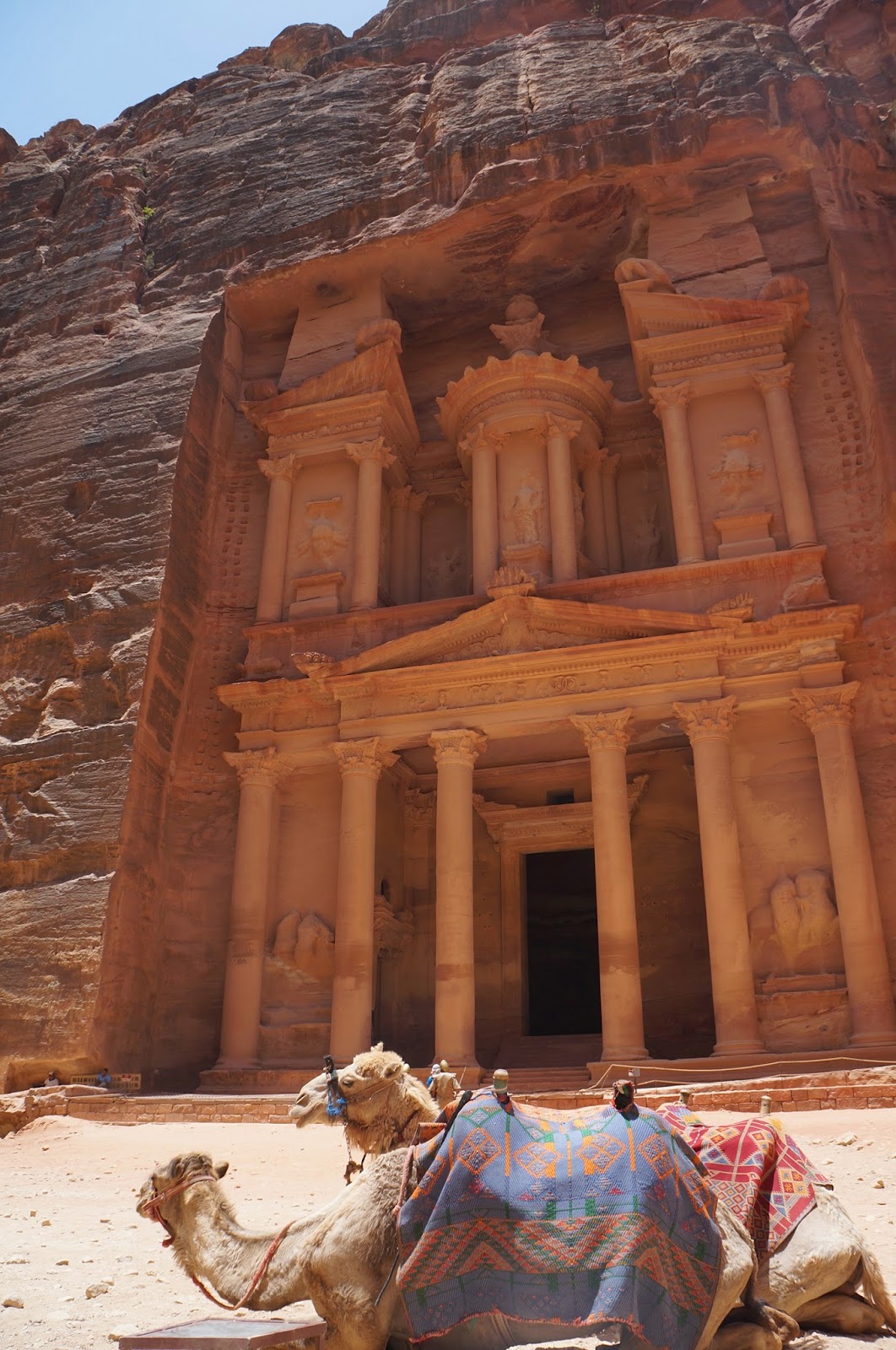 There were people offering donkeys, camels and horse carriages - we chose to walk - the full distance from entrance to the Monastery and beyond. While we followed the main path, there were various diversions from the Monastery with random arrows painted on rocks, I decided to follow them and was rewarded by gob-smacking views. Petra was as magnificent as people make it out to be, and more. So much so that we returned the following day to climb the Roman Steps to the High Place of Sacrifice and saw the ancient city from top. 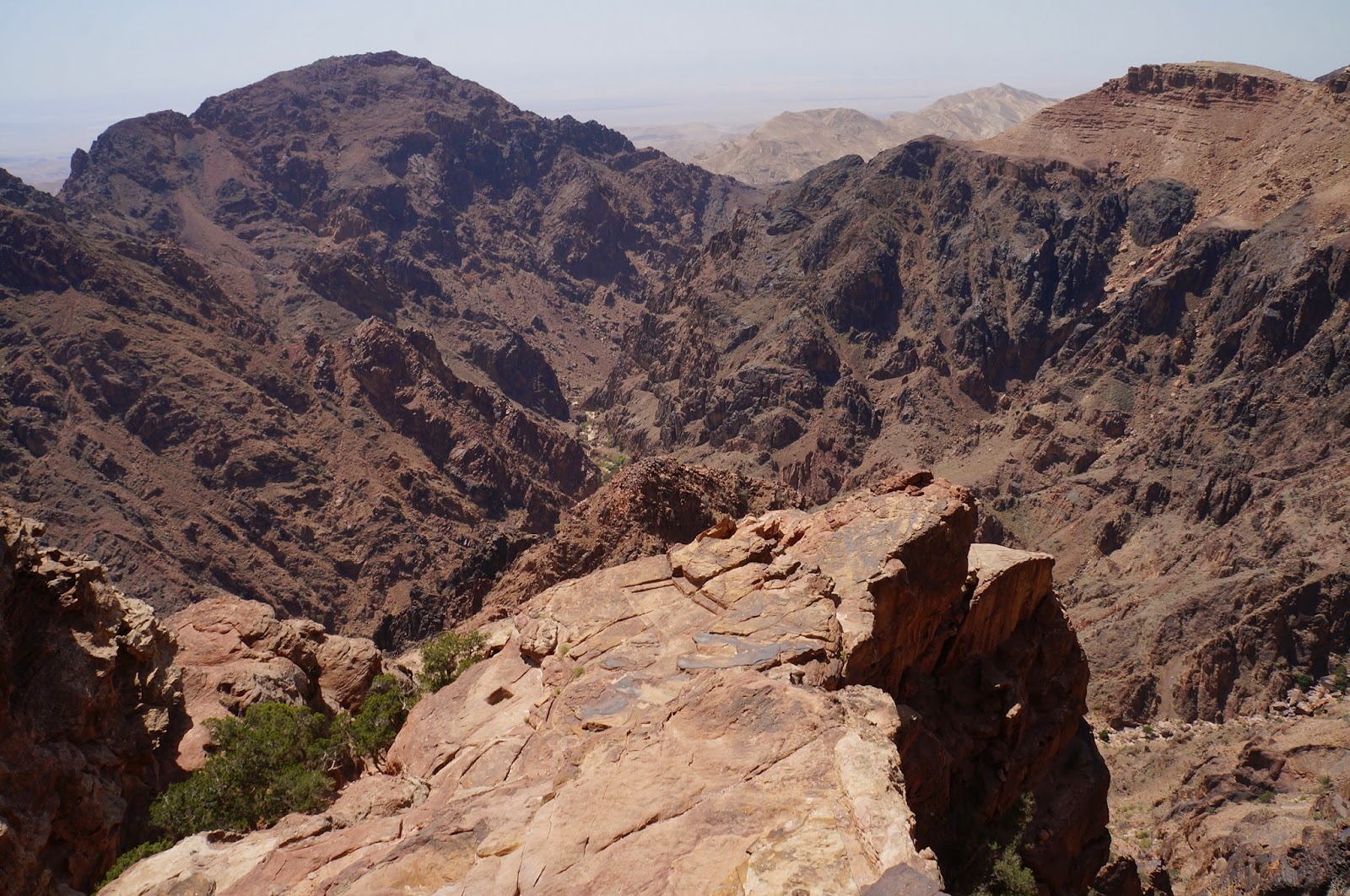 For the leg between Petra and Amman, we decided to take the bus. Taxi would have been 70JD; bus was 9.5JD each. There was only 1 coach a day that leaves for Amman from Petra, in the carpark behind the visitor centre, at 5pm. No one in the entire town were able to definitively tell us what time the bus leaves, some says 4, some says 5. Truth is, the bus comes in from Amman in the morning, and they have reserved seats to take these people back. Therefore only the spare seats, if any, would be available for extras. There were LOTS of people from the shops telling us that they have reserved seats for us blah blah blah - I just didn't know who to believe. So, the best thing to do, is to reserve your seat online, at least 24 hrs before hand. (http://www.jett.com.jo/)

Amman is... confusing. It's a city that has sprawled across a mountain, with the majority of roads on steep hills. We stayed in the business district where roads were wide and junctions were intimidating. Yet 10-minutes away was the downtown area that pretty much looked like Miami in 1960s. Our first stop was Harshem in downtown, where the king and his family eats. I was pretty excited to be eating with the locals, always a fan of authentic street eats. There were, of course, no menus, so we just asked for a mix. It came with the most delicious hummus, some lentils, falafels and warm bread with sweet tea. All for 4JD! 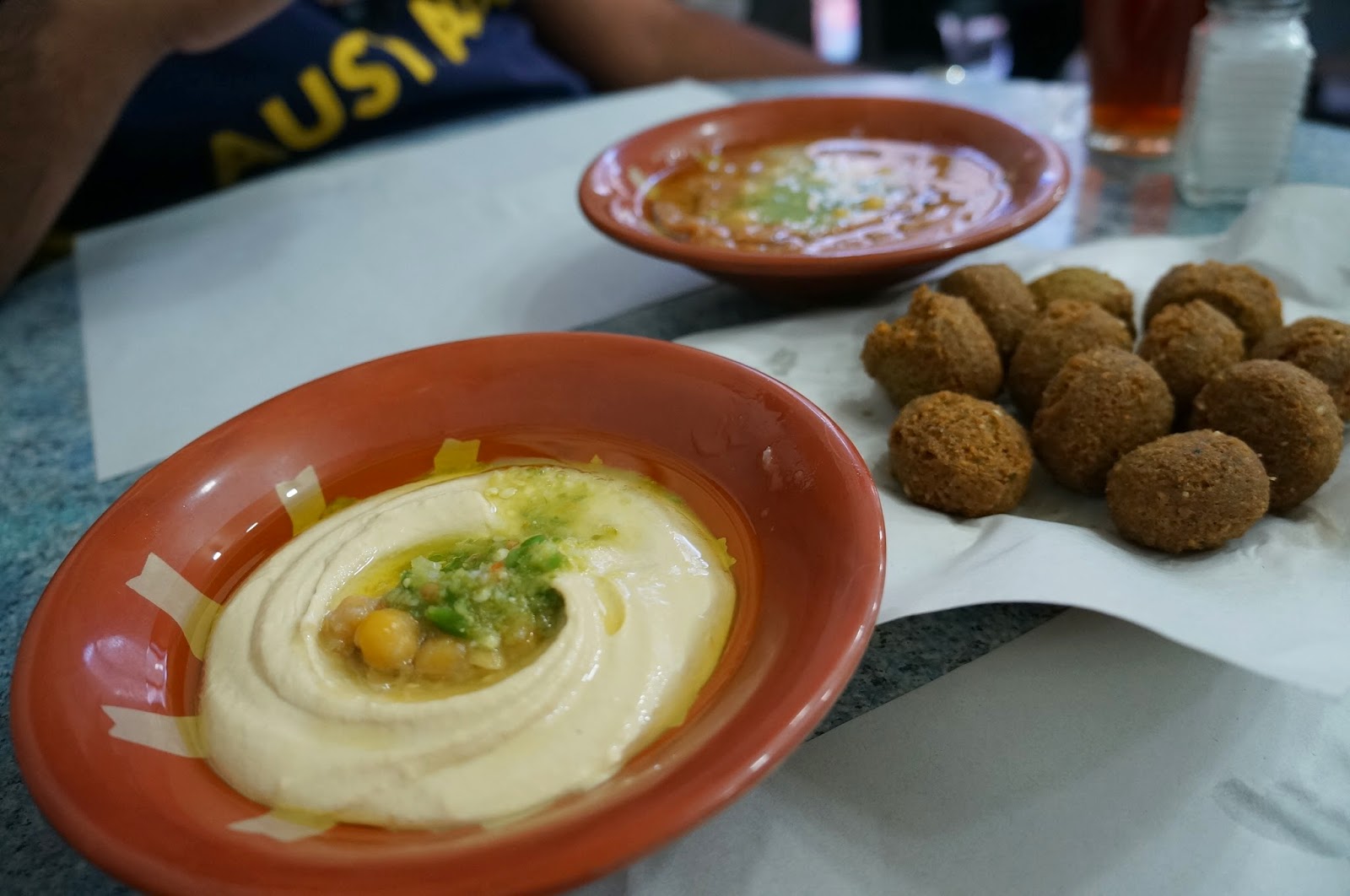 This little hut called Habbibah selling dessert is unbelievable. You queue outside the little booth to place your order, a small portion of the knafeh (pronounced nam) goes for JD 0.60. OMG - I had two in a day. There is another sweet shop called Habbibeh closer to the markets, and I bought some baklava to munch on - amazing. 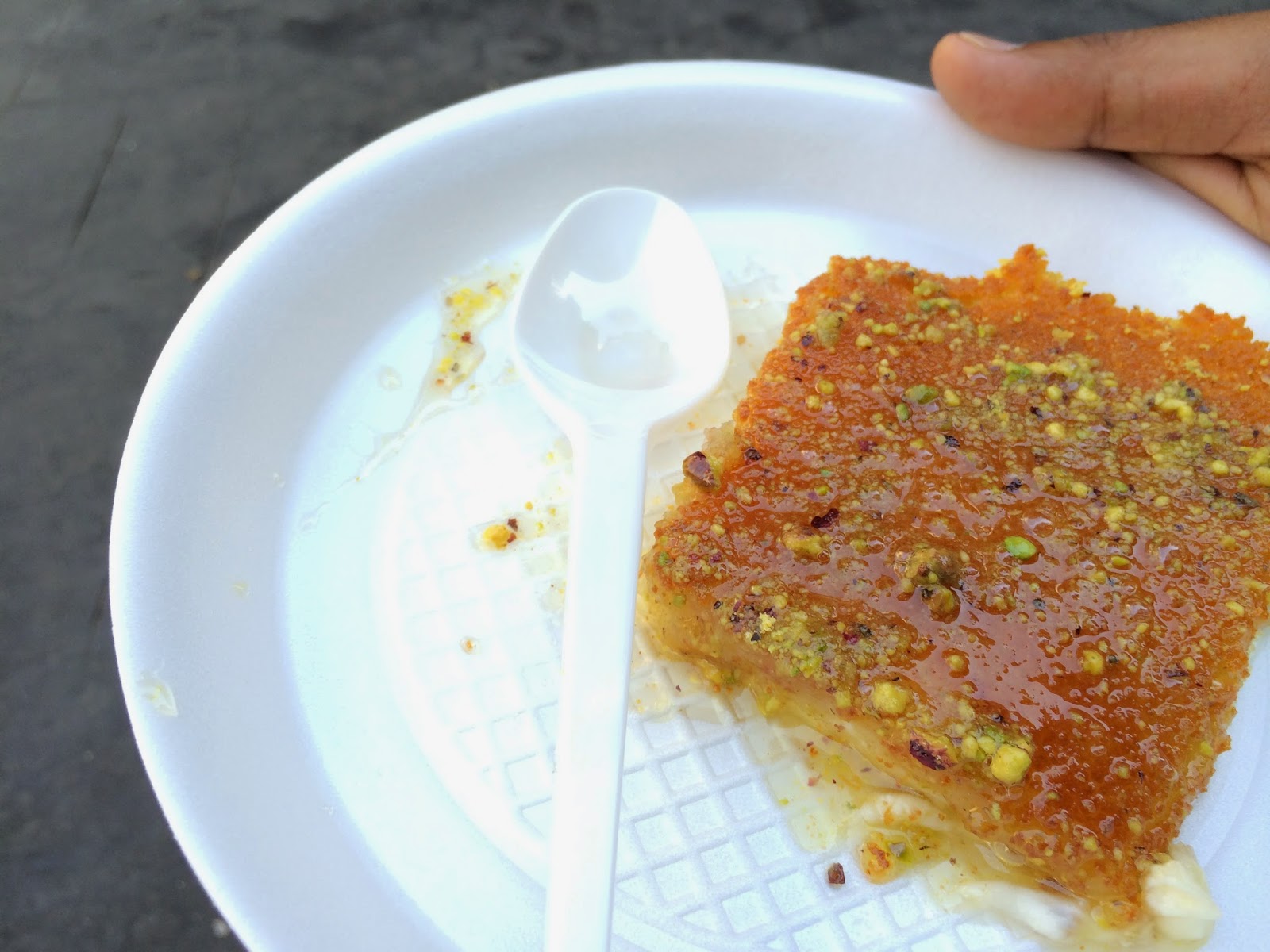 Despite the hustle and bustle of the markets, it's just unlikely that we'd end up buying much. So we climb to Rainbow Street, which was a completely different atmosphere, lined with cute cafes and bar for the young, trendy locals. We went to Books@Cafe, which was a two-storey house with a roof top terrace that overlooks the city. Had some watermelon & mint shisha to breathe like the locals. 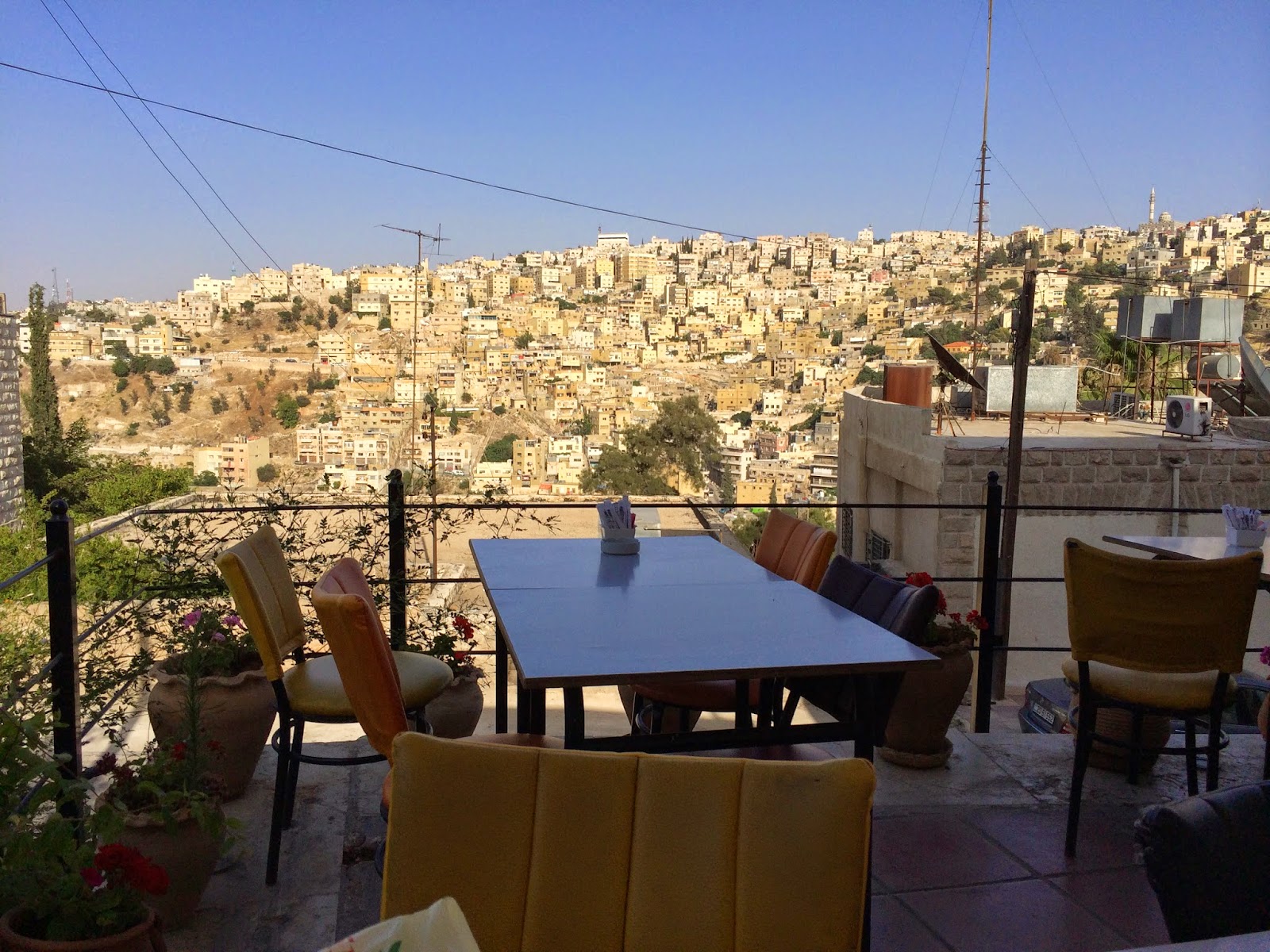 One more snack that we had was from Ameer directly opposite the mosque, called 'shut-a', which was a small wrap with a crushed falafel, a spread of chilli sauce and french fries. Sounds odd, tastes awesome. 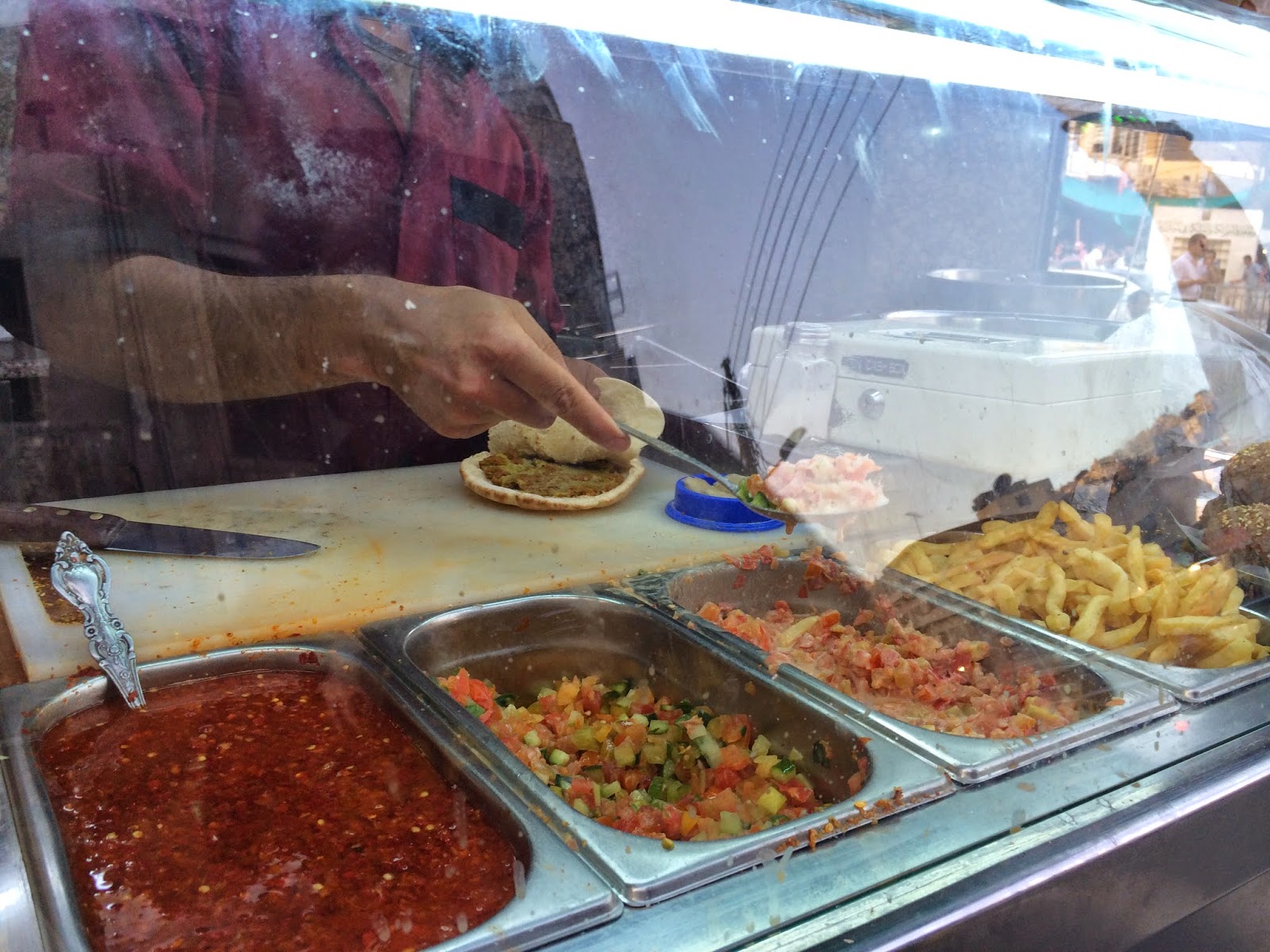 We had dinner at O'berg / Auberge, which was recommended by a local. They don't have traditional Jordanian dishes, but serve some good fish.


It had been an awesome trip. It did end with one bad taxi driver; he snatched notes from us after claiming our notes were 'old and finished', then started yelling and tried to hit us. For safety we just got out of the cab, took a photo of the number plate and reported to the tourist police. In general I found Jordanians friendly and helpful, and you get bad people in any city.
at 06:43