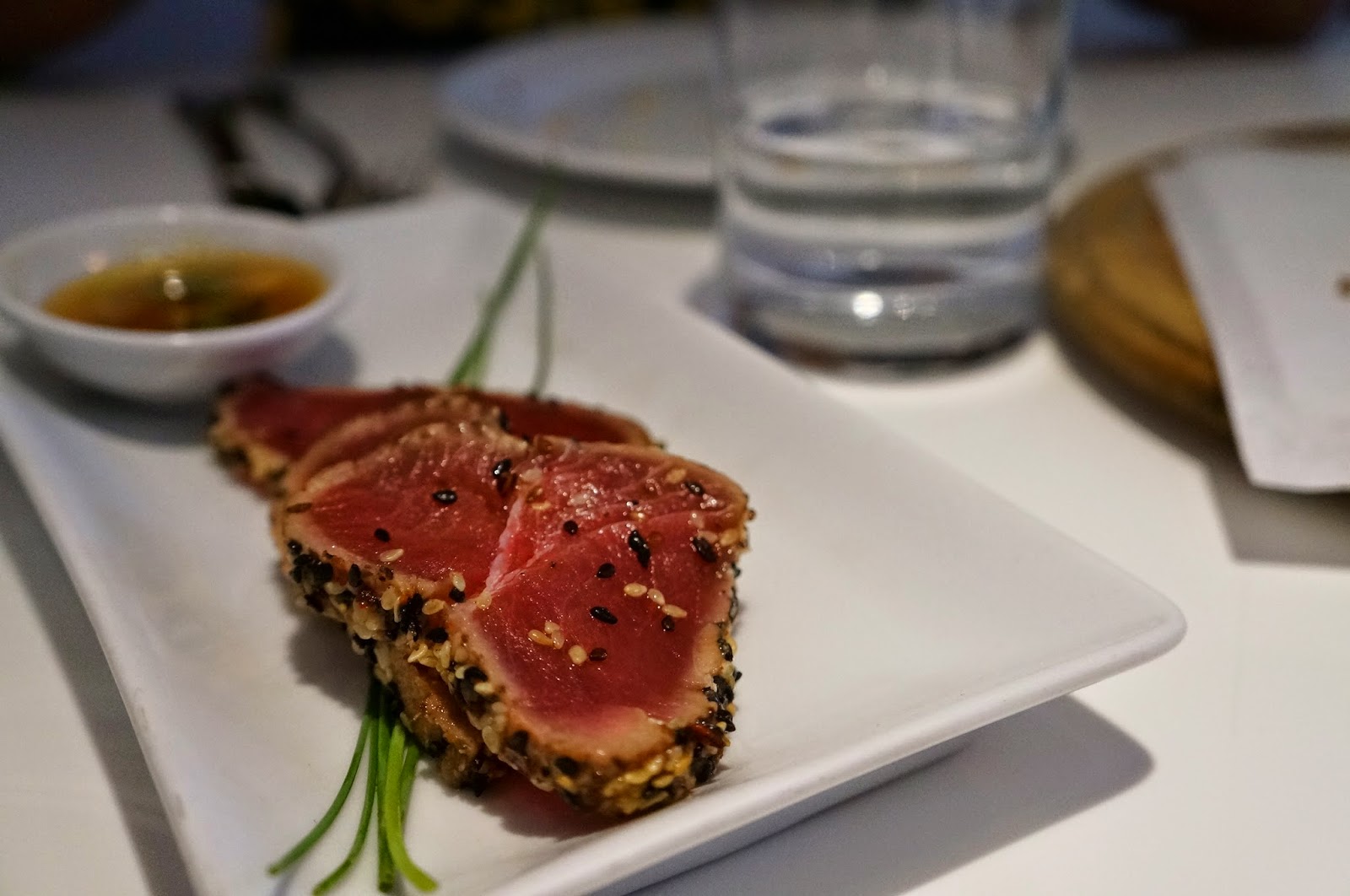 At 31 degrees, there is no better place to dine than Ottolenghi. The small deli counter with an add-on dining room is a pain to book.

As usual the place was packed with people waiting at the deli counter. We were shown to the long white communal table, almost rubbing elbows with our neighbours. We had a bottle of Lambrusco Fernando – not the kind of viscous, sweet Lambrusco I was hoping for. It was surprisingly dry and thin, almost Rose like. The bread board had an excellent variety; thought the cornbread was a bit dry and crumbly, but the rest was fine. I really enjoyed the cold deli dishes at NOPI, especially the aubergine with yoghurt. But seeing we have secured a table, we thought we’d concentrate more on the dishes from the kitchen. Cold food from counter we can always get as take-out for picnics.

The tuna was beautifully seared on the rim with a sesame crust, leaving the majority of the slice raw and sashimi-like; its rich, luscious textures were amplified by the generous thickness of the cut. The honey dipping sauce complimented the powerful rareness well, with a subtle, fragrant kick from ginger and spring onion. Delicious. 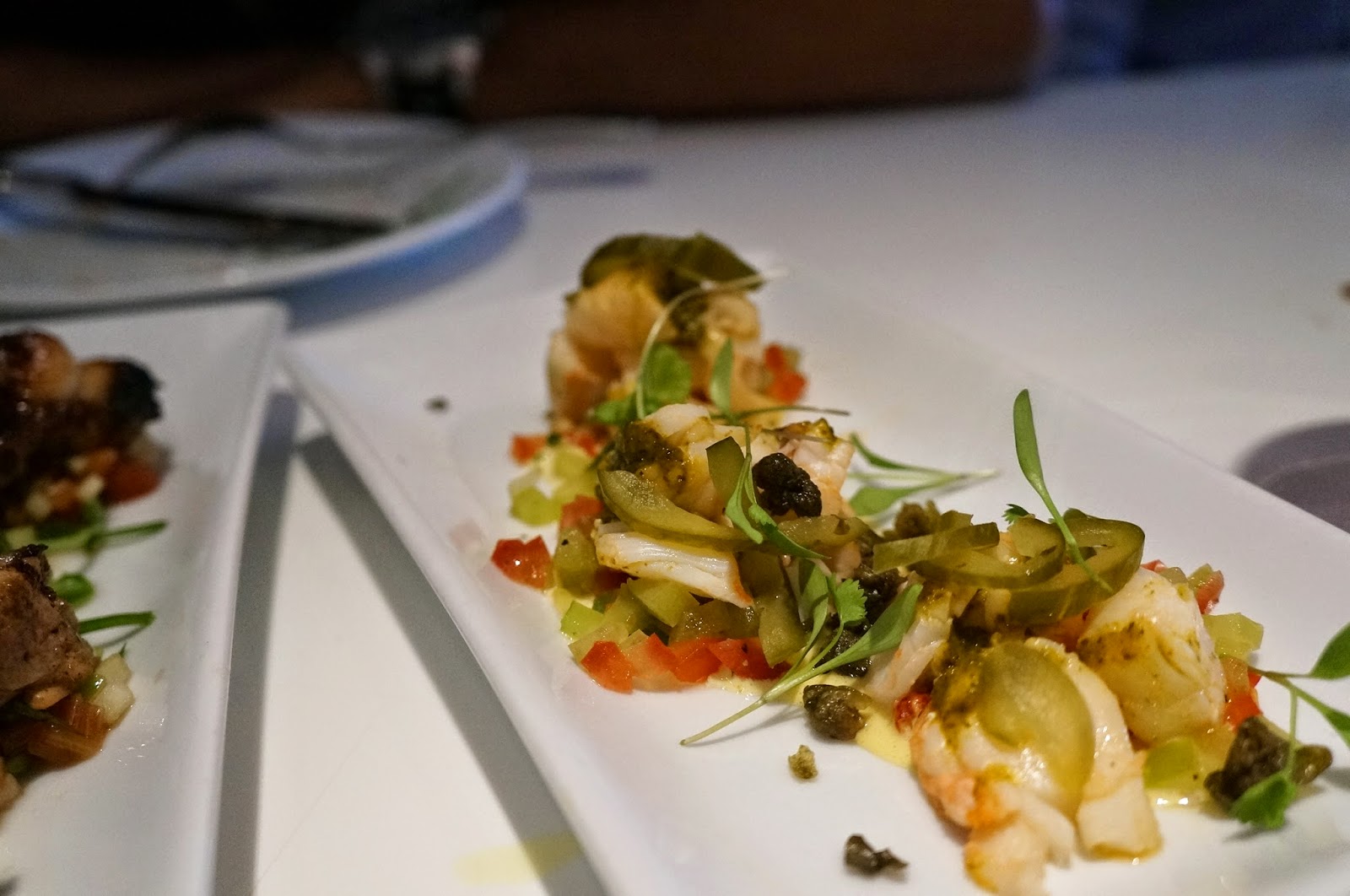 The small cubes of lobster were cooked perfectly to retain its bounce and succulence. The dish was kept light and summery with a mildly tangy and citrusy salsa, plenty of crunch to contrast with the soft lobster. 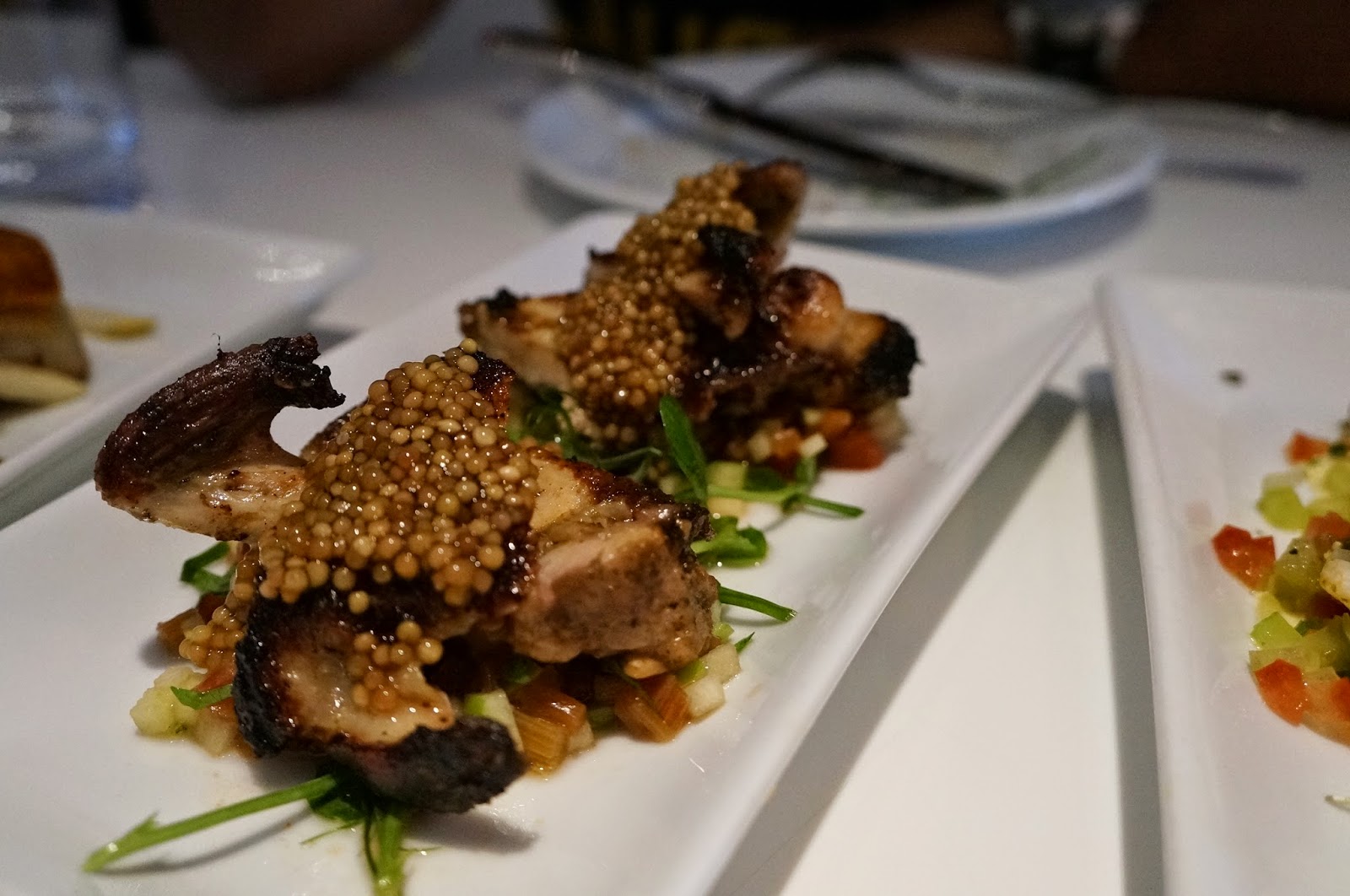 It was hard to pick a favourite from the 3 dishes from the kitchen, but if I had to choose one, it would be the quail. The skin was almost covered with mustard seeds, and the mixture of popping seeds and crispy skin gave a very interesting mouth feel.  The muscles were moist and tender, packed with gamey flavours from the little bird, gently lifted by the citrusy fruitiness from tiny cubes rhubarb and apple. It was simply a perfect execution of a very balanced dish. 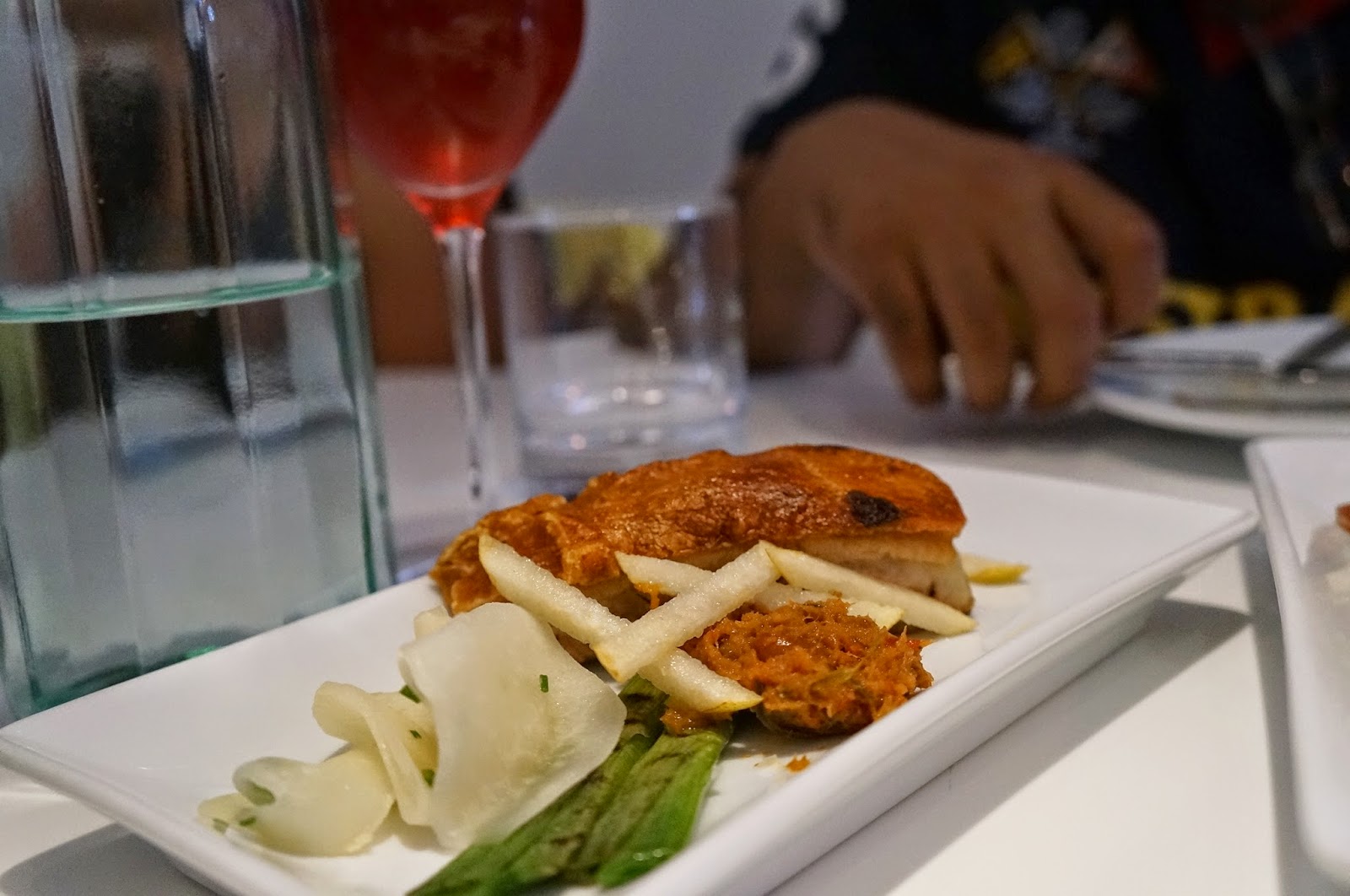 The skin on the pork belly was incredibly brittle, shattered into pieces as I pressed my knife through the slab of juicy pork. Despite the belly, it didn’t feel greasy or heavy, the meat tasted clean with concentrated piggy flavours. The sambal added an eastern touch with more powerful kicks, evened out with the sweet pear sliced. I only wish there was more of it. 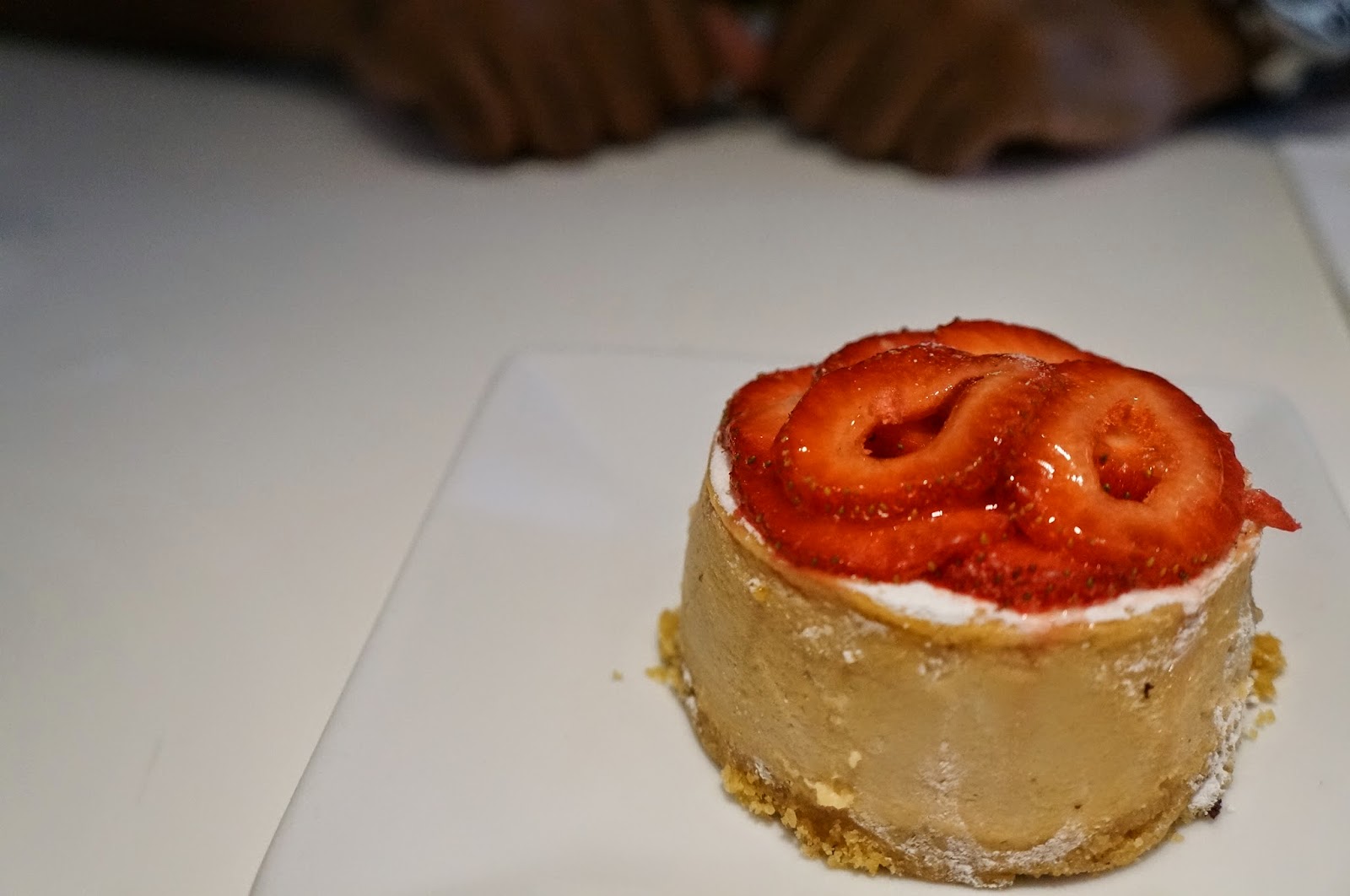 The food was spot on. Like NOPI, the recipes were well thought-out and creative to add an unexpected twist. The dishes were kept light but with plenty of flavours and textures. I am a fan of small dishes, and these were perfectly sized to allow tasting of a few without being over-indulgent. I didn’t think there was much ambience in the dining room at first, there was something a tad too sterile about the shiny white table and chairs and the minimalistic interior. As it got darker outside though, the effect of the candles was more warming and brought a cosier vibe. I really enjoyed my evening.

On a side note, we went to see Mr Burns at Almeida Theatre across the road. It was an extremely odd play. I’m not going to lie – I slept through the first act. It got better I the second act and then I was completely lost in the third, thinking I was conned into a weird cult gathering. I understand the underlying message around fragility of memory, but the delivery was not my cup of tea. Marmite material.

You may also like: Arabica Bar & Kitchen, Yalla Yalla, Riding House Cafe
at 23:56