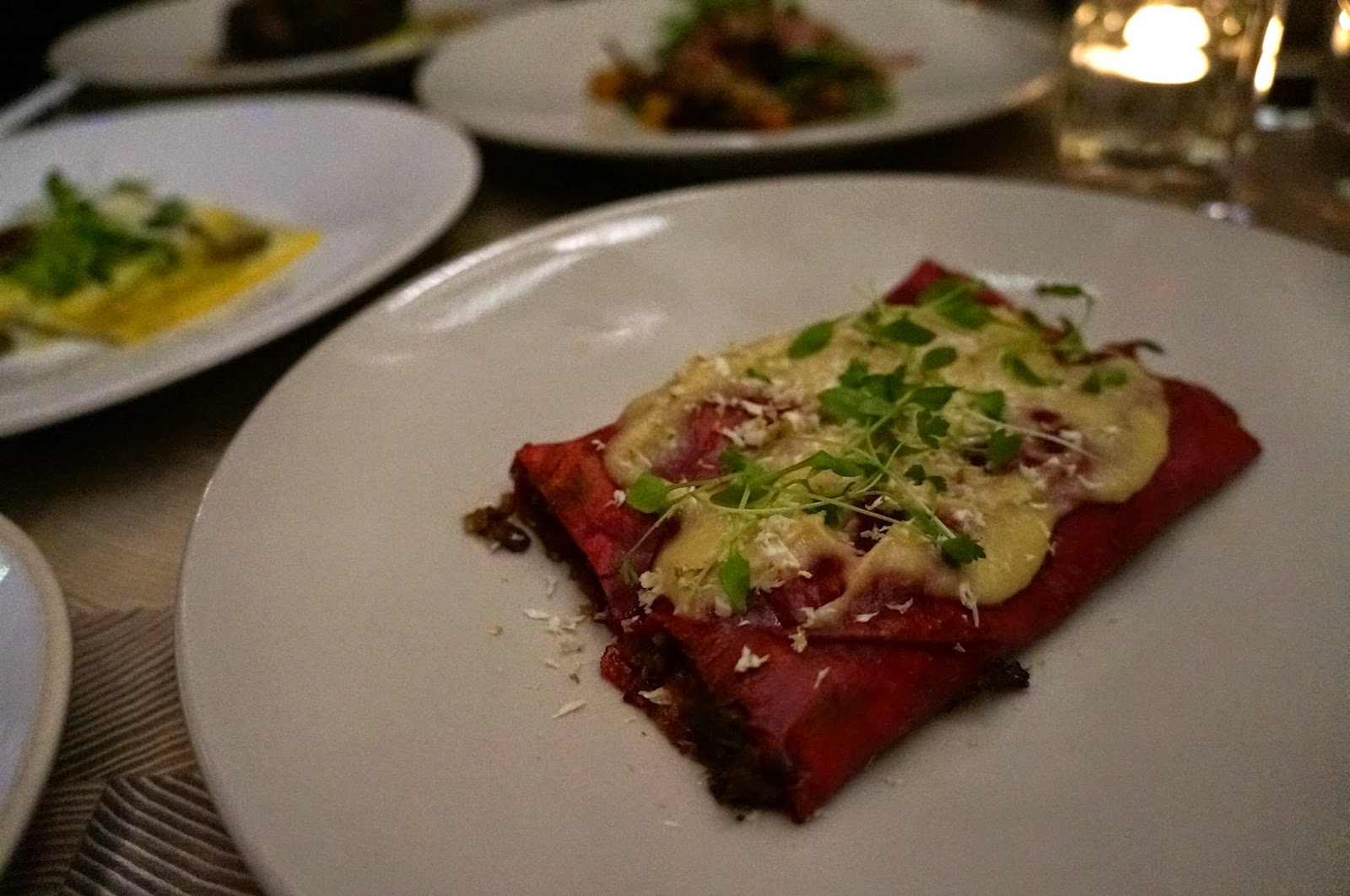 I’m often asked why my blog seems so light on Italian restaurant reviews. While I do enjoy the occasional pasta and traditional homecooking, I think Italian is relatively simple and it’s good as long as the ingredients are fresh, which is a luxury we don't have in this country.  Then there is this new breed of modern Italian cuisine, lighter pasta dishes and smaller plates to share. Four to Eight falls in this category.

It was their soft launch; they have only been running for a week on the evening Mister and I visited. We were seated on the ground floor, next to the bar in the middle of the dining room - simplistic, Scandinavian-style décor. Our server was full of smiles but was short of recommendations - apparently she tried and loved everything on the menu, and couldn’t’ highlight a favourite. That’s never a great sign, just means nothing stood out. 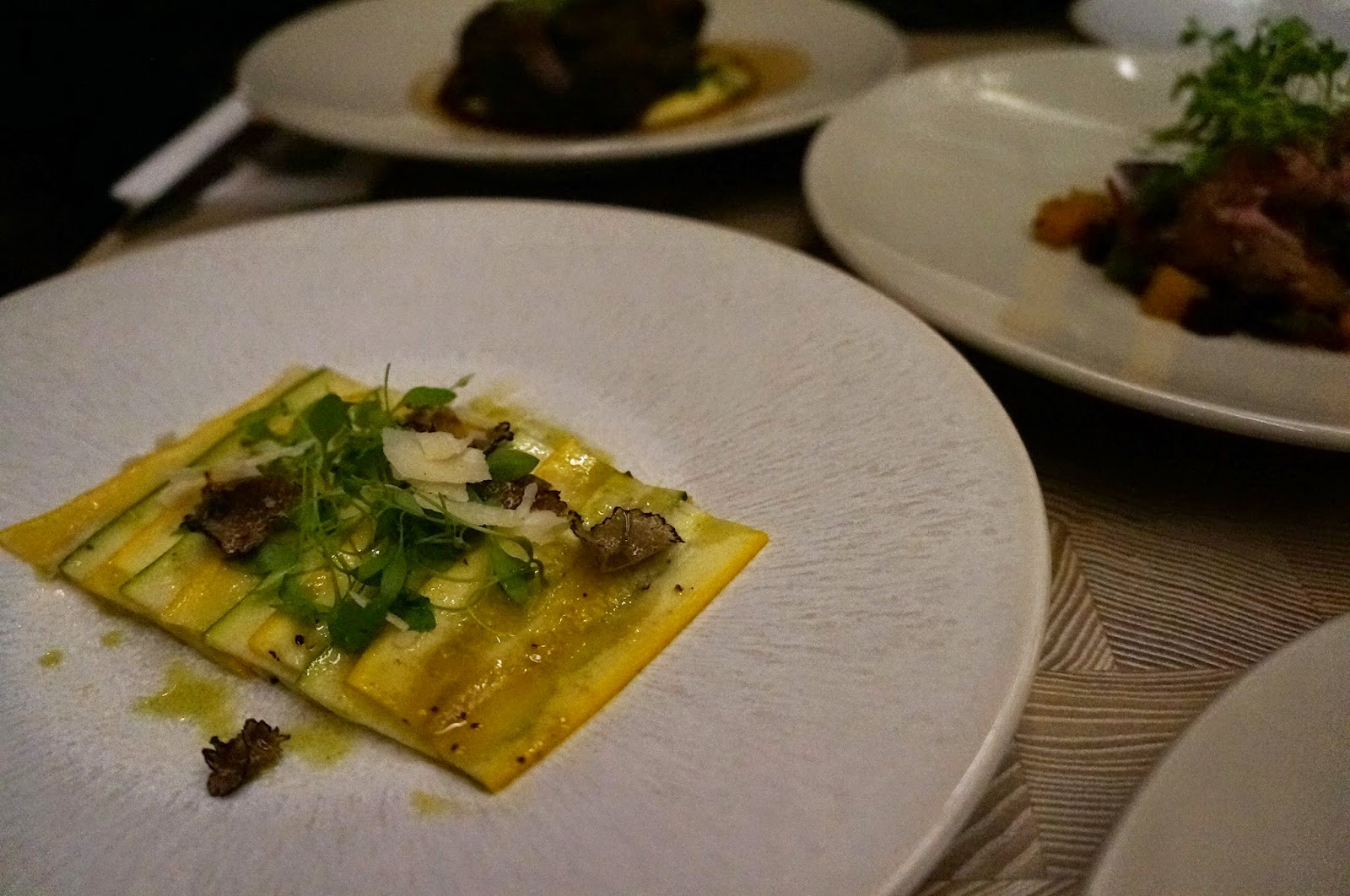 By the time our dishes arrived the bread still didn’t make an appearance, so we just cancelled it.

Thinly sliced courgettes with a very light drizzle of dressing, topped with truffle shavings and crumbs of pecorino. It’s a simple combination, but the dish was tipped off balanced. The dressing was very faint and its honey sweetness was barely detectable, the good thing was the truffle fragrance was even more tamed so it wasn’t an overkill. But the courgettes weren’t sweet enough so all I could taste was the nutty pecorino. In my humble opinion, I would slice the courgettes even thinner to tone down the obtrusive crunch and bring out their flavours more.

Mister could not have been more disinterested. 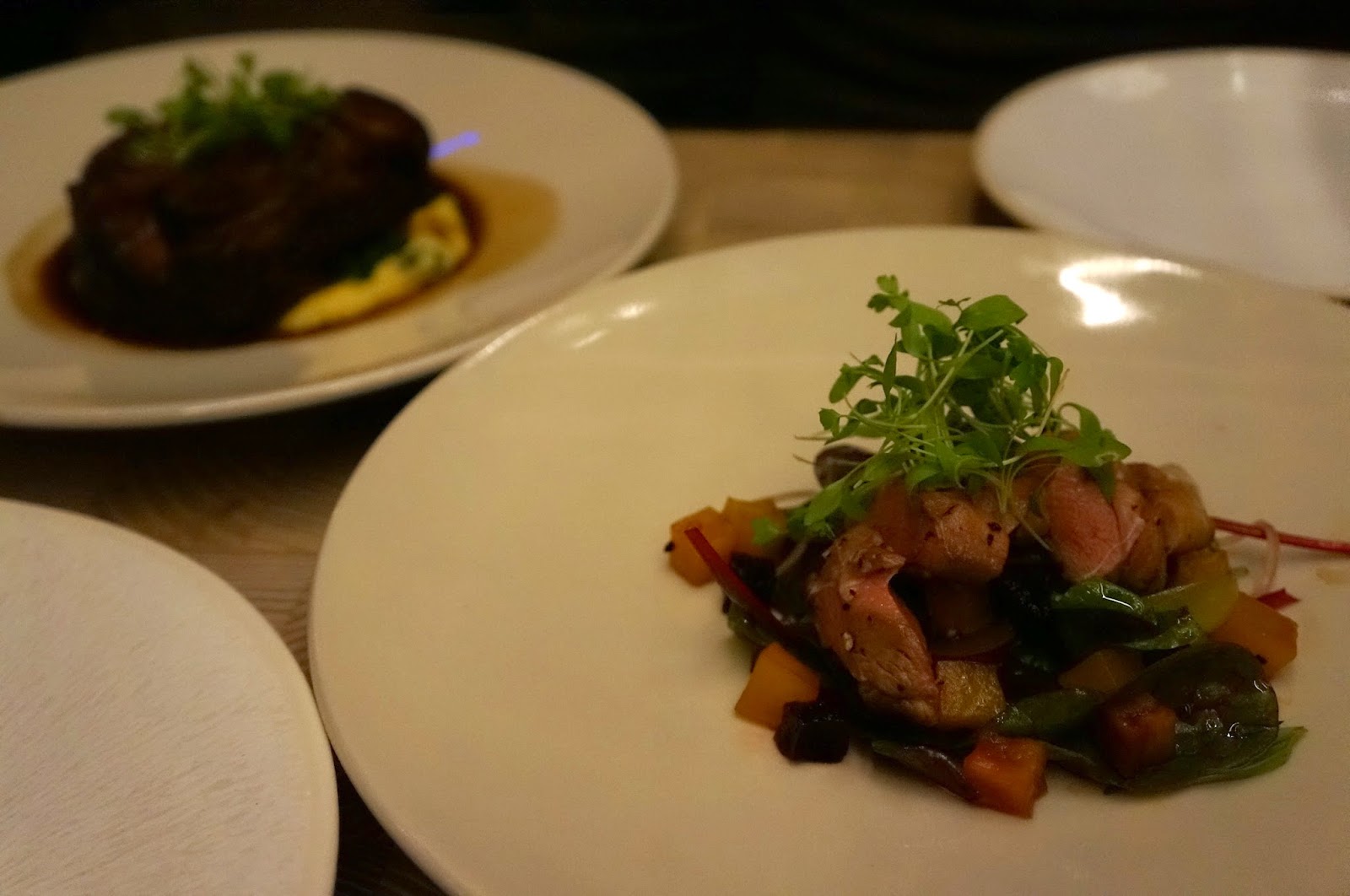 Pigeons were cooked to a good medium, tender and moist with a slight chew to bring out their gaminess. Again the dish was off balance with the overly sweet cubes of beets, there was an unpleasant artificial sweetness that brought out the acidity of the grapes. It was a good idea that needs fine-tuning.

Head to tail refers to the oxtail and ox tongue in the stuffing. It sounded like a great idea; super tender oxtail with some chew from ox tongue would have given excellent mouth feel. Unfortunately this fell short on delivery - the shreds of oxtail lacked juices to hold the meats together. The cannelloni may have been topped with sauce, but it was dried and cracked to leave a blanket of blandness… 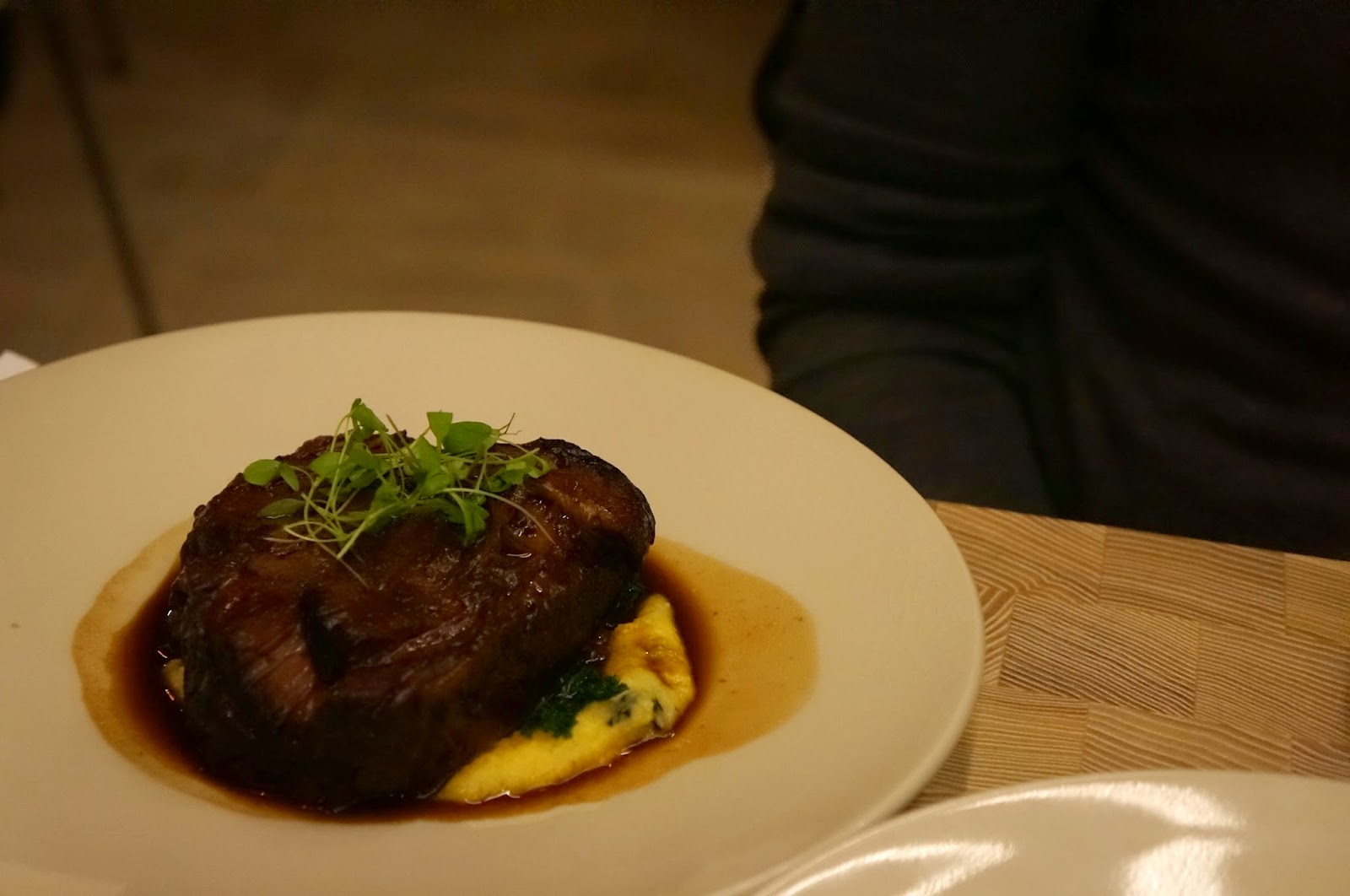 This was a dense brick of dry mass. As I cut into the hulk of beef, my knife was battling with the tangling shreds that simply wouldn't break apart. We asked for more red wine jus to moisten up the meat, but the flavours had already leaked away with the meat juice and despite dousing it with sauce, the tasteless, sinewy beef was dreadful. I felt sorry for the cow.

Our server noticed we left the brick of beef untouched, and offered to take it back. She said she tasted it and agreed it wasn’t up to the normal standard. Fine. Perhaps the kitchen was under pressure in the first week, and so pre-prepared some dishes, this one was probably re-made one too many times. 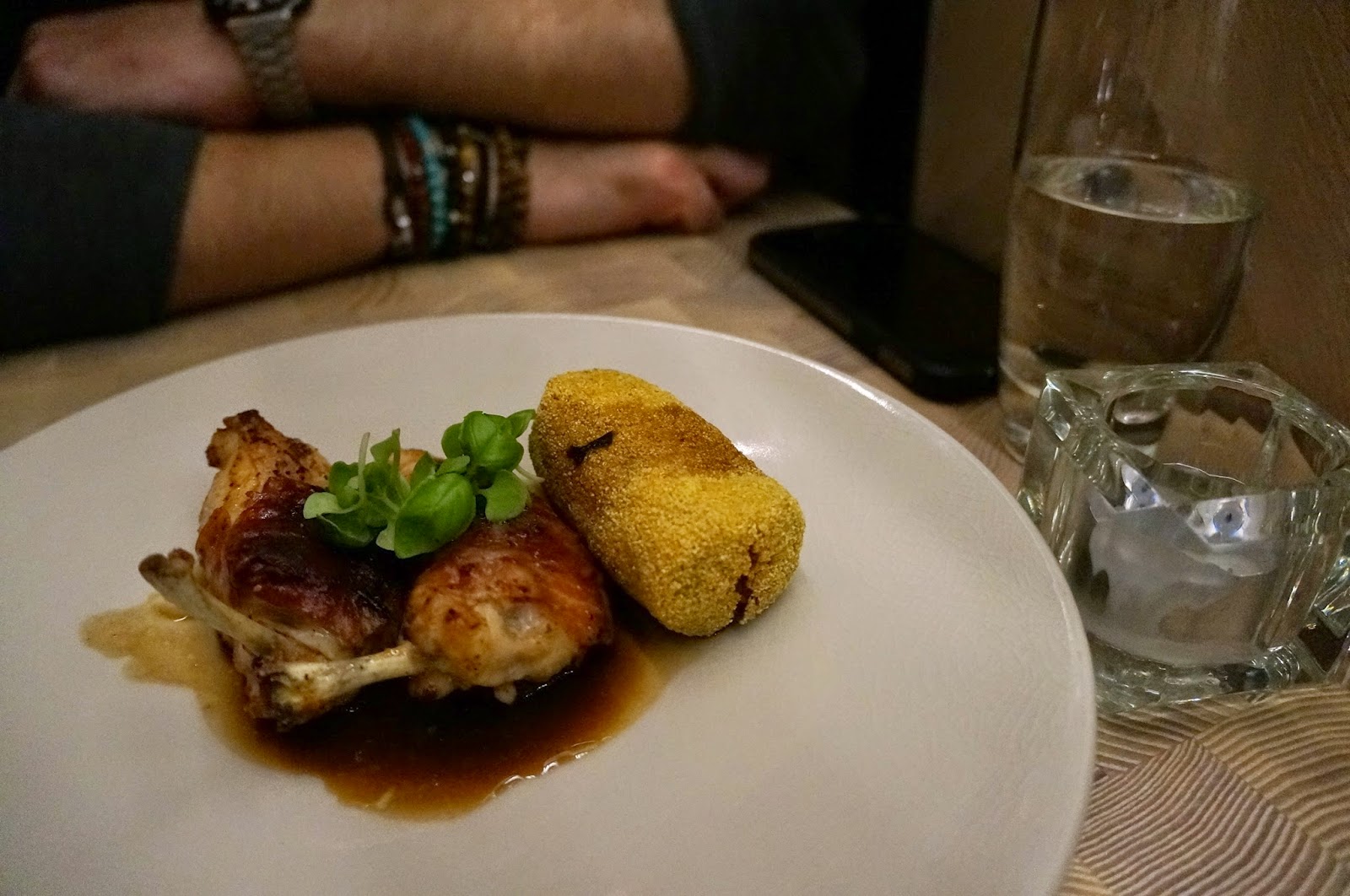 After sending back the brisket, we ordered the truffled chicken instead.
Judging from the portion, it must have been a premature baby chicken. And you know what’s really odd? I couldn’t make out which part of the chicken we were served. It had a piece of bone attached to it, which suggests it was a thigh, yet the texture of the meat was quite dense and slightly grainy, like chicken breast - albeit a tolerable one. It kind of defied the purpose of cooking a baby chicken when they couldn’t retain the tenderness of the soft muscles. No hints of truffle either, more like the regular roast chicken seasoning. The ham hock croquette on the side, however, was quite enjoyable – a very odd accompaniment to chicken I thought.

The Full House mini selection of all desserts 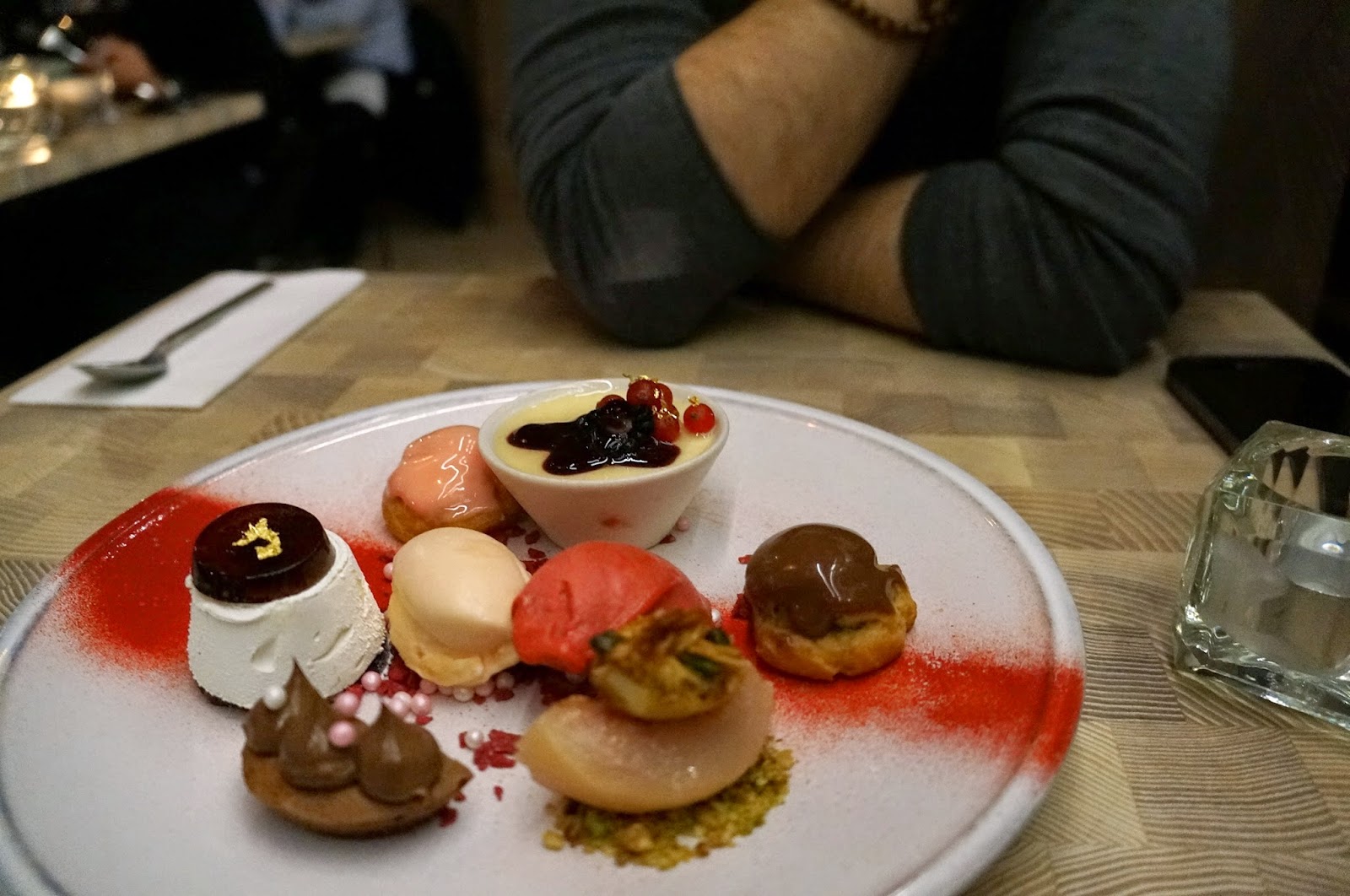 This could be described as a plate of torture. I’m not sure which was worse, when I had to beg for this from Mister, or when I finally had to sample what’s on the plate.

In short, it was a plateful of sugar in different shapes and colouring. The so-call deconstructed tiramisu was the worst offender, sickening whipped cream with a chewy disc of coffee. The pink sorbet was of an unrecognisable flavour, but Mister’s expression was priceless. I would have happily substituted each of them with a Waitrose equivalent, at least they were edible and I would have been at a lower risk of diabetes. It’s rare to find a full plate of failure in such a beautiful arrangement.