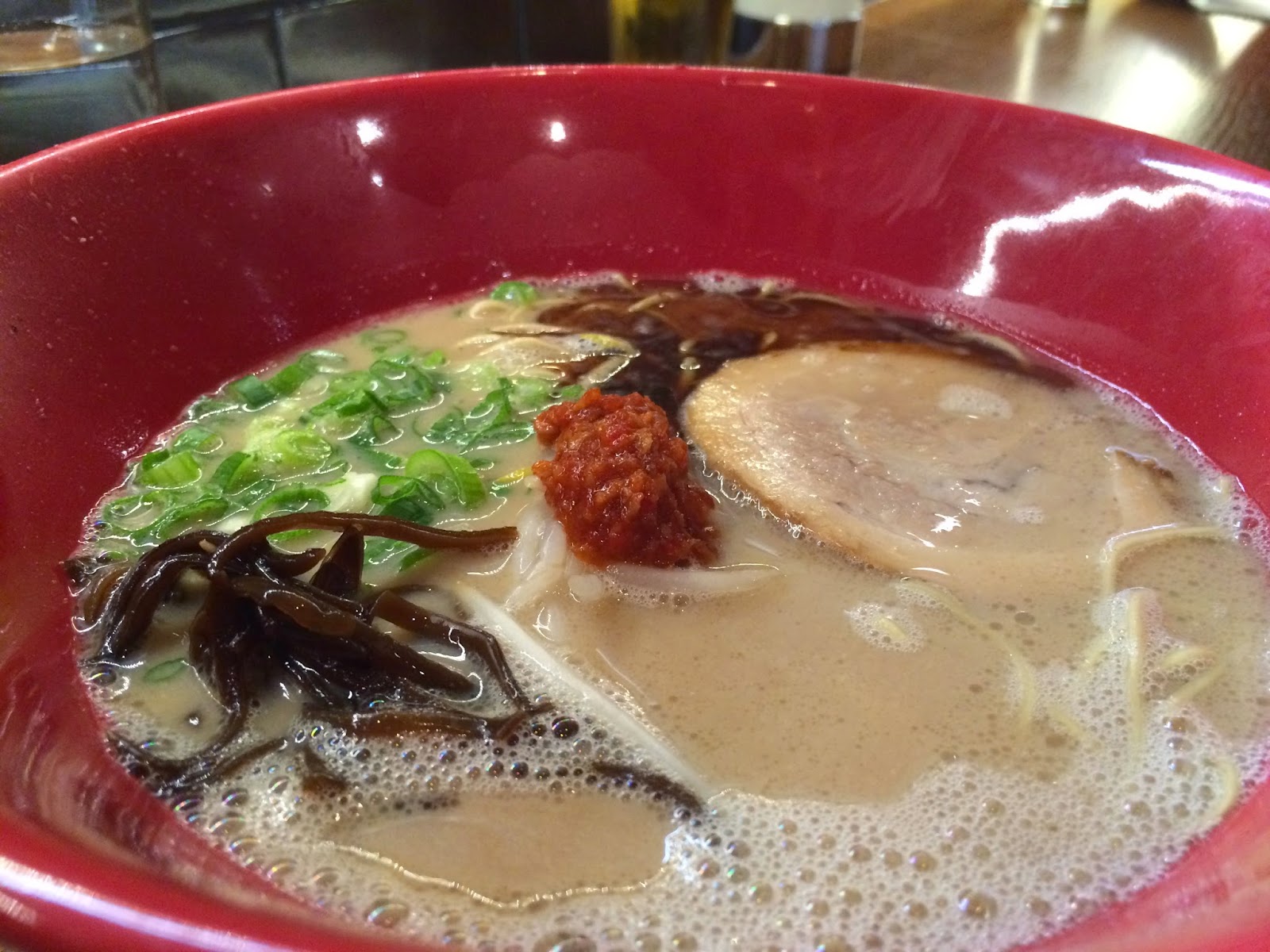 The wait is finally over. Cynthia recommended Ippudo last Christmas when I was in New York, but there was too much to eat and too little time. So when we heard it was opening in London, I had it on my radar. Seeing Cynthia is on her Aussieland adventure, she missed out on the grand opening night. Luckily Will was ready with a ramen craving after his Kilimanjaro trek.

The place was buzzing; chefs busy at work behind the steaming ramen bar, club music in the background and the cheerful, also startling, roar of "irasshaimase" by the waiting team every time their customers get seated. While everything felt slightly out of place, I took comfort in the number of Japanese supporters in the queue, maybe a bit of an authentication stamp. We were seated at the ramen bar downstairs.  The menu looked incredible, we wanted to order everything, well, I did. 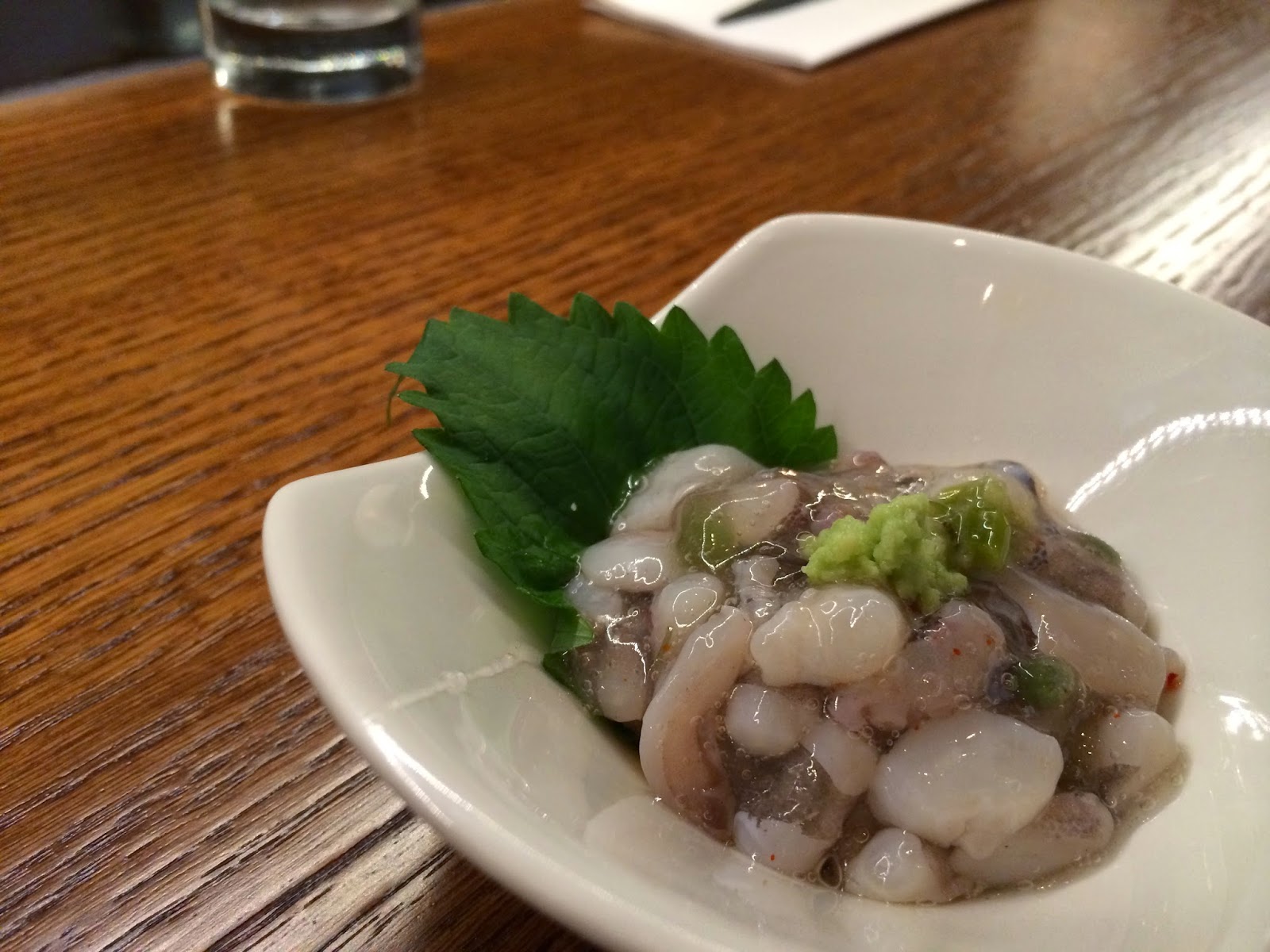 We started with a mini starter. The octopus was diced into tiny cubes mixed with fresh horseradish that brought a mild hint of wasabi. Personally I prefer the thrill of strong, pungent wasabi punches that attacks my olfactory senses, gets tears in my eyes and mini explosions at the back of my throat, in a good way. This was probably too mild, too safe, but still loved the playful sliminess and bounce. 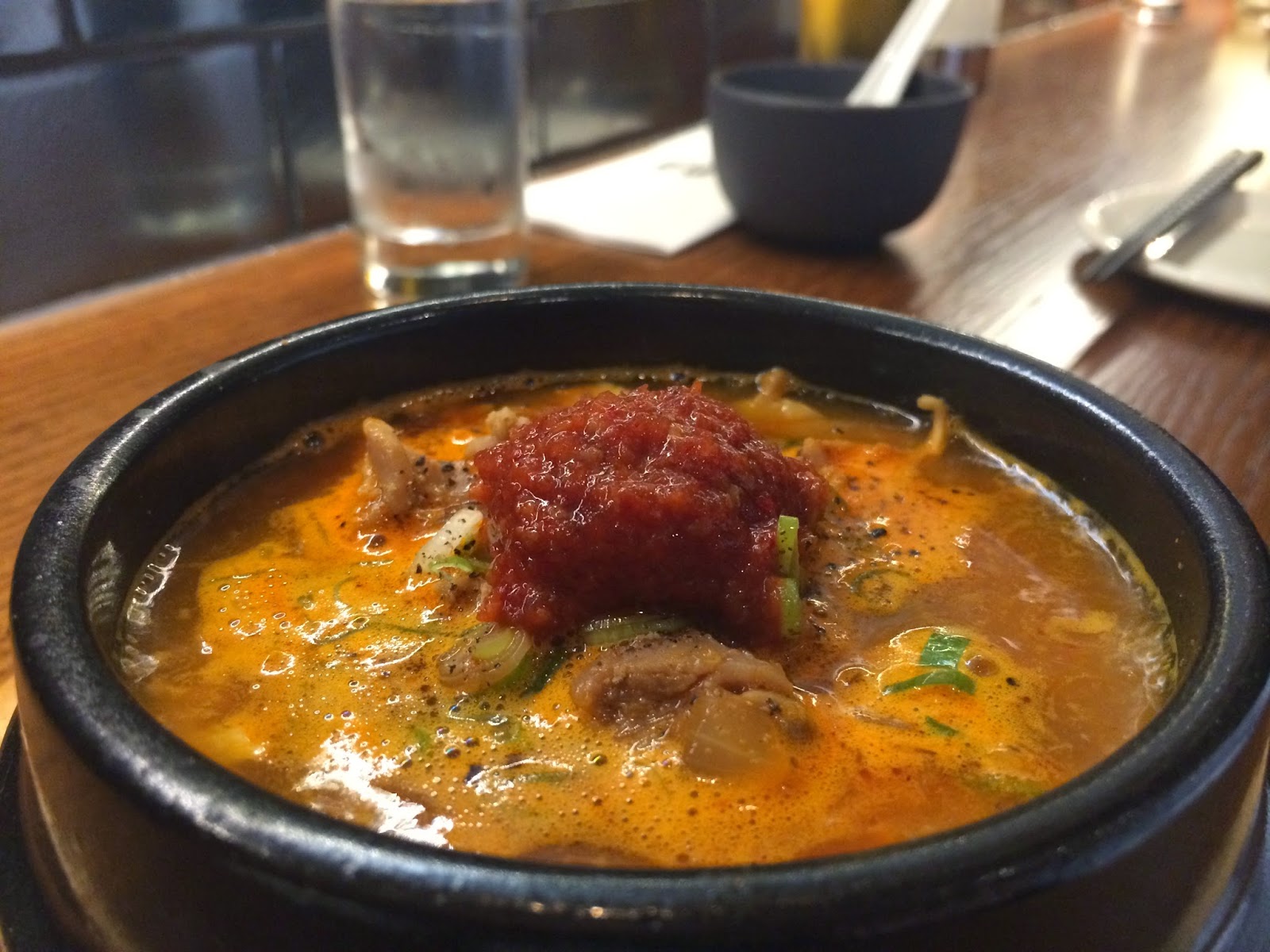 The broth in this pot was delicious, first was the miso sweetness before the heat from the spices crept in, bringing a surge of warmth throughout the body; the spiciness was tolerable, tantalising instead of tongue-numbing. A good mix of textures too - tofu was silky and fragile, tender dices of chicken meat, and a sprinkle crispy ramen, softened by soaking up the soup. It was a very comforting dish. 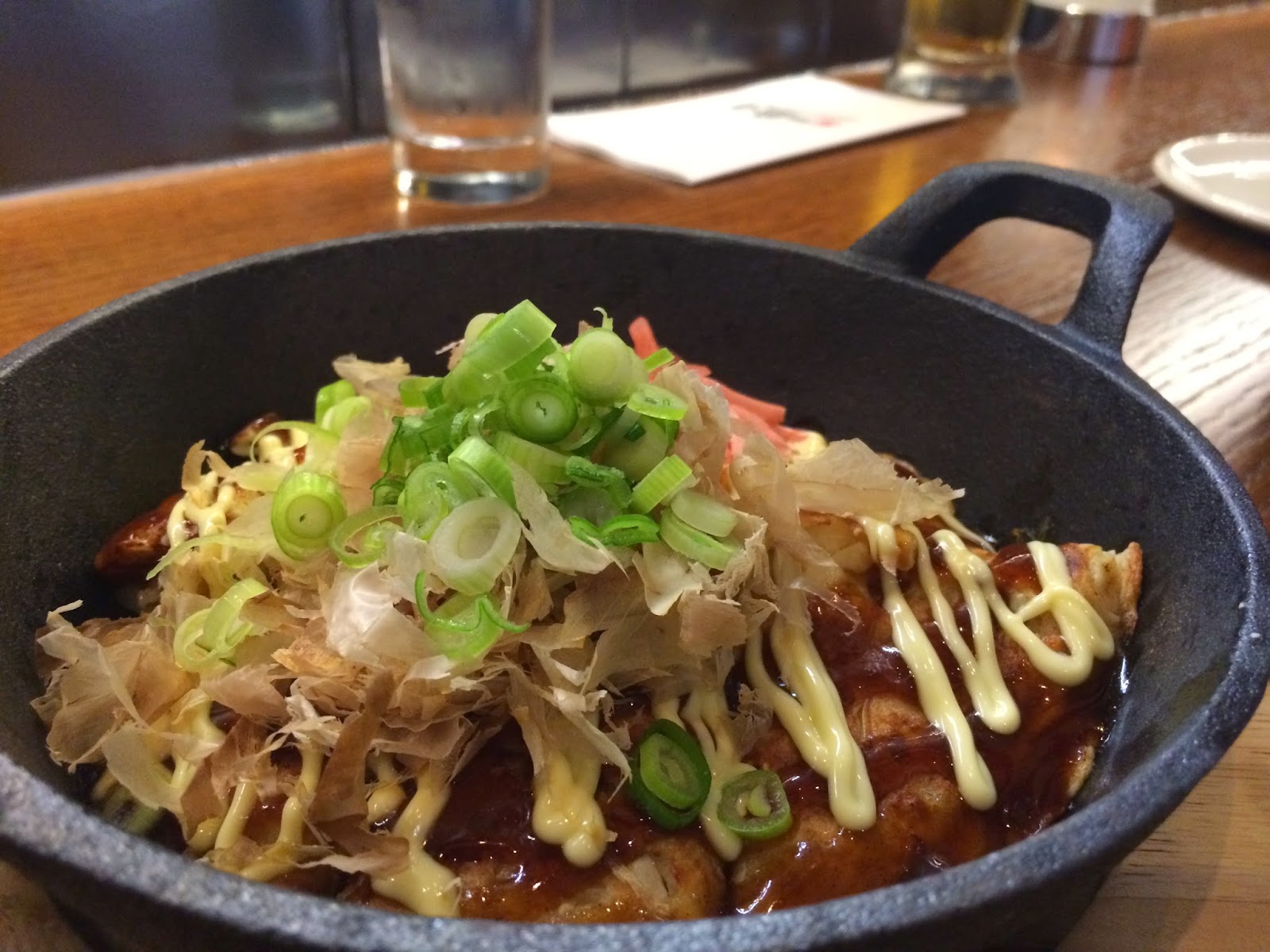 This was an okonomiyaki on an iron plate, it didn't even need to be served on a sizzler, but hey. A good one nevertheless. There were large slices of pork wedged in the dough, which were a tad too lean and chewy for my liking, but with enough mayonnaise and okonomiyaki sauce, good crunch from the vegetable, this can't go wrong. 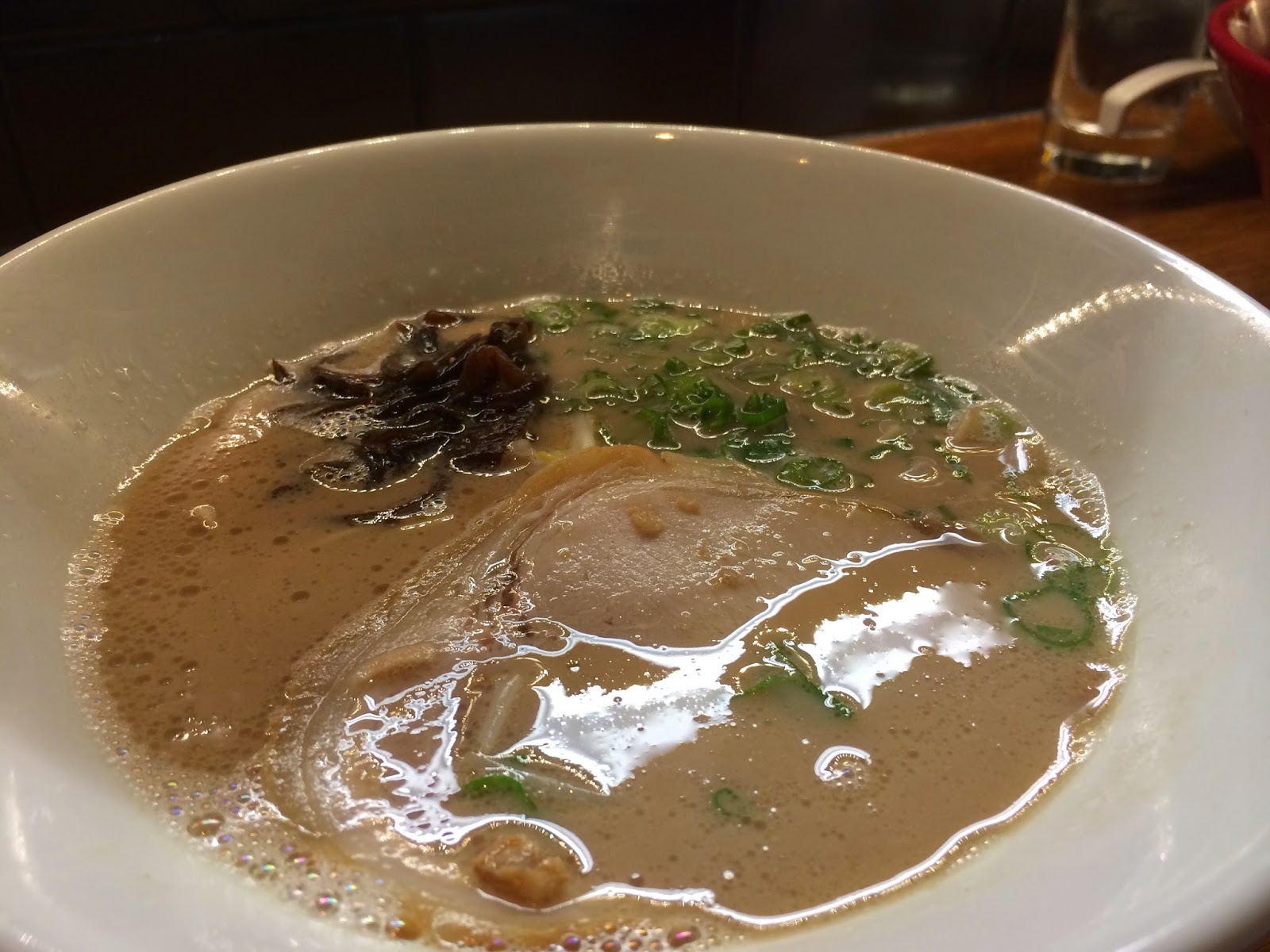 And this is what we came for.

I didn't realise the ramen didn't come with an onsen egg. I usually get upset when they only serve half a soft boiled marinated egg, to have none at all was bordering offensive. You need to order it as a side add-on. Huff.

The broth fell a bit short at my first slurp. It was thick and creamy without being groggy, which was good, however I thought the flavour was quite flat. It was rich and savoury but lacked depth, it didn't have layers that developed with the noodles. The noodles had some bite to it, could be more springy. Sadly chashu failed. The meat was grainy and dry, way too lean and thinly sliced. I have had better elsewhere.

This version made slightly more impact on the first sip, perhaps it was the extra Umami Dama paste that gave the broth more complexity. I thought this was tastier at the beginning, but as Will pointed out, it became too salty around half way through the bowl. Like the classic version, the whole thing fell flat.

The ramen at Ippudo didn't blow me away. Out of the key elements for the perfect bowl, I'm not sure if Ippudo ticked any of the boxes. It was mostly good but not great. That said I have been told New York and Japan have very different interpretations. Maybe this one was catering for the London appetite...? While I may not return for the ramen, I wouldn't object to coming back for the rest of the menu if others insist on trying, their hirata bun and black cod fish and chips do sound intriguing.

As for ramen, maybe Kanada-Ya across the road?