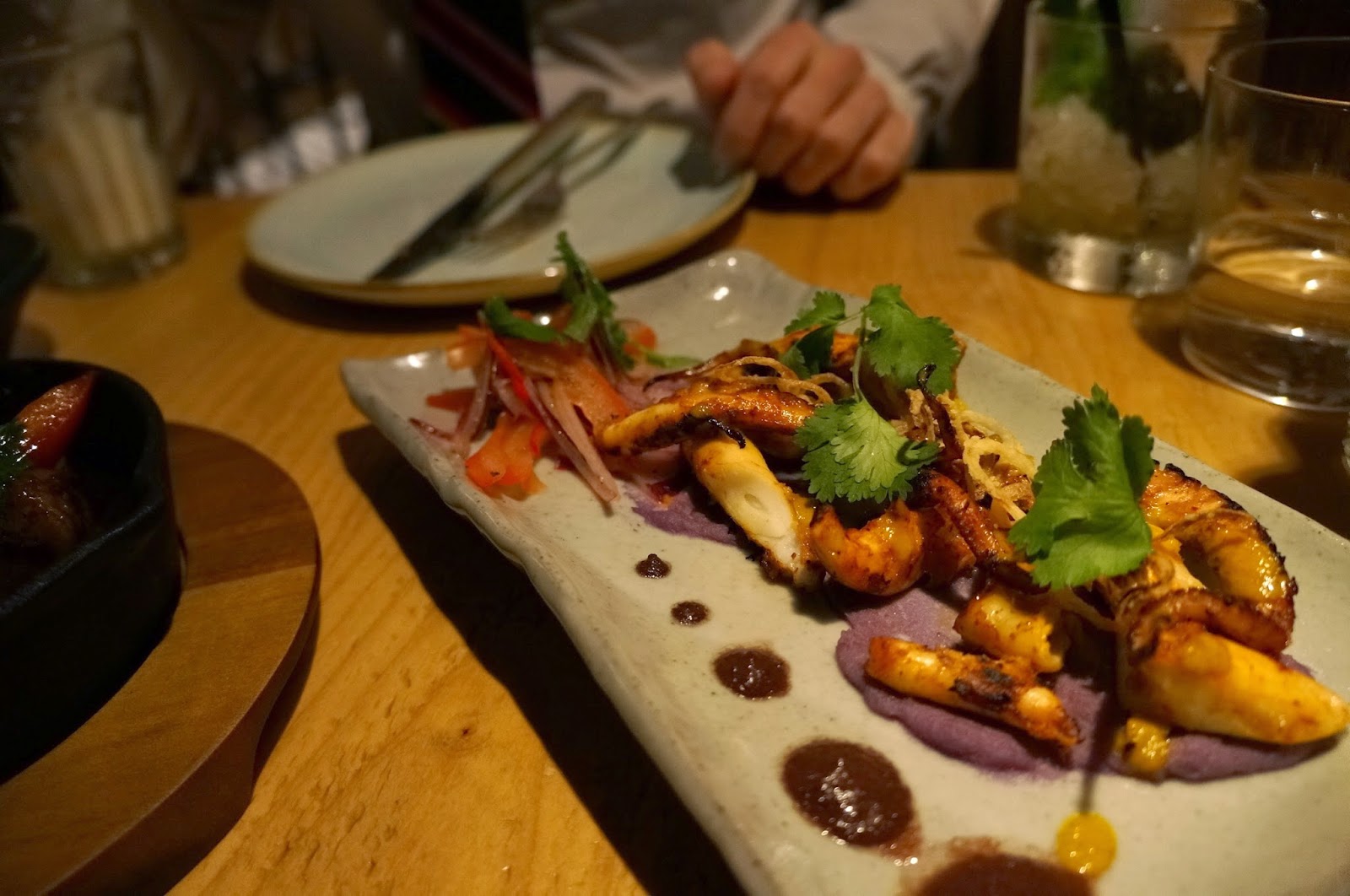 Pachamama is the latest addition to the collection of Peruvian restaurants in London. There is obviously something hip about lime juice-marinated raw fish and quinoa salad, which I recently learnt is the new middle-class staple. I missed their soft launch but was kindly offered 30% off my food bill when I visit.

There was an in-house DJ in the subterranean dining room. He seemed oddly out of place (not to mention bored) – there was no fiesta vibe to the restaurant. The ambiance gradually picked up as the tables were being filled, though still not sure about the DJ. Shan started with a house pisco sour, aka Papa’s Pisco, which arrived as a full tumbler of whipped egg white. One of the reasons I don’t like pisco sour is the foamy texture that doesn’t taste of anything. It gradually settled and tasted alright, still not my first choice of cocktails. I preferred my fruitier Eau de Lima. 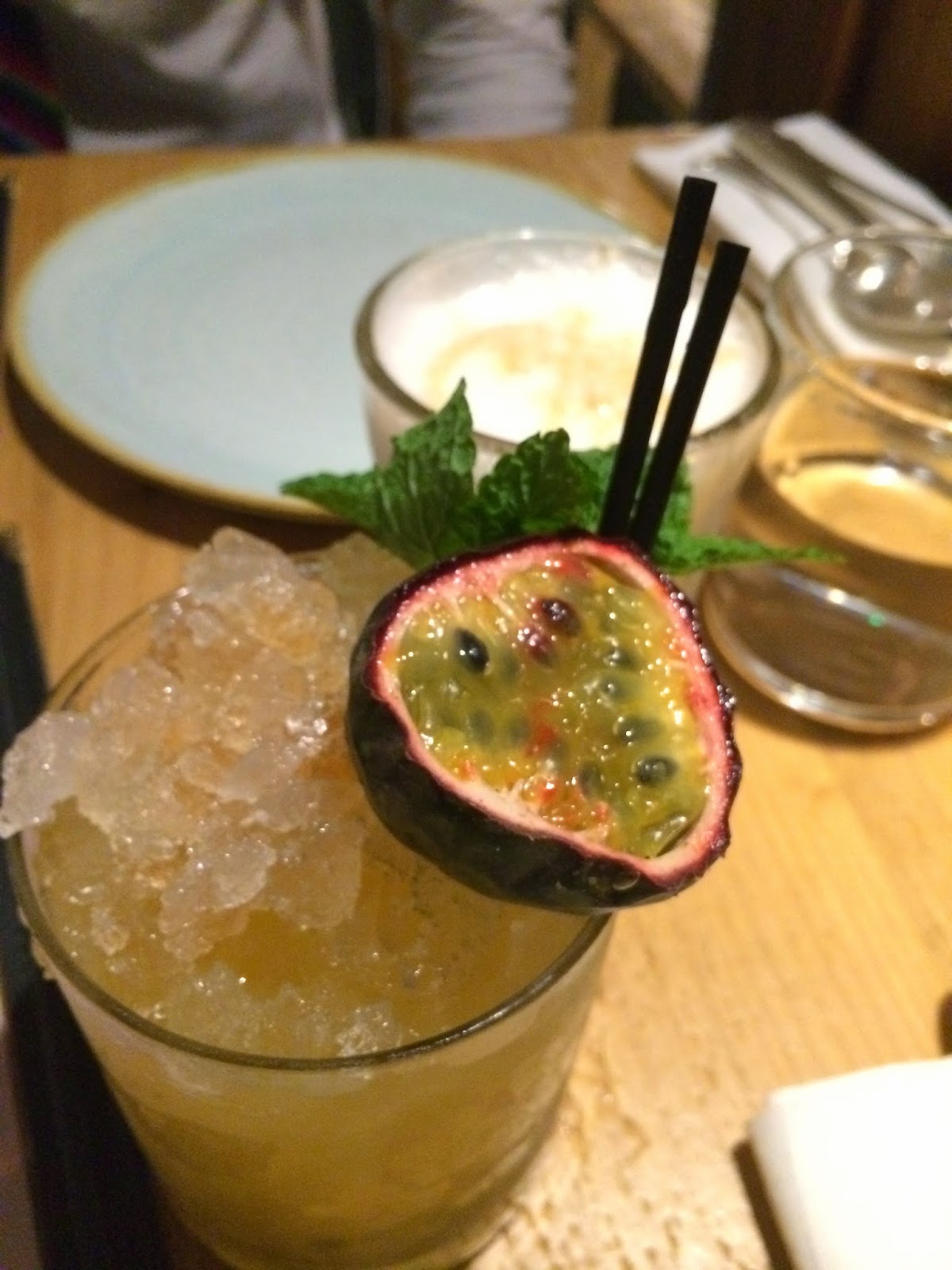 Our server was adorable - helplessly unhelpful, but incredibly cute and attractive; the kind of girl that gets away with everything because of that dolly smile. We wanted to try something from each section of menu and so started from the top. We asked her what chicharrones were, and the response was sweetly amusing; it was a broken combination of “not sure how to explain”, “it’s not meat but like meat”, “very small”, “quite sweet and very nice”, “it’s good!”. How could I resist; we had to order it just to find out what this mysterious dish was. 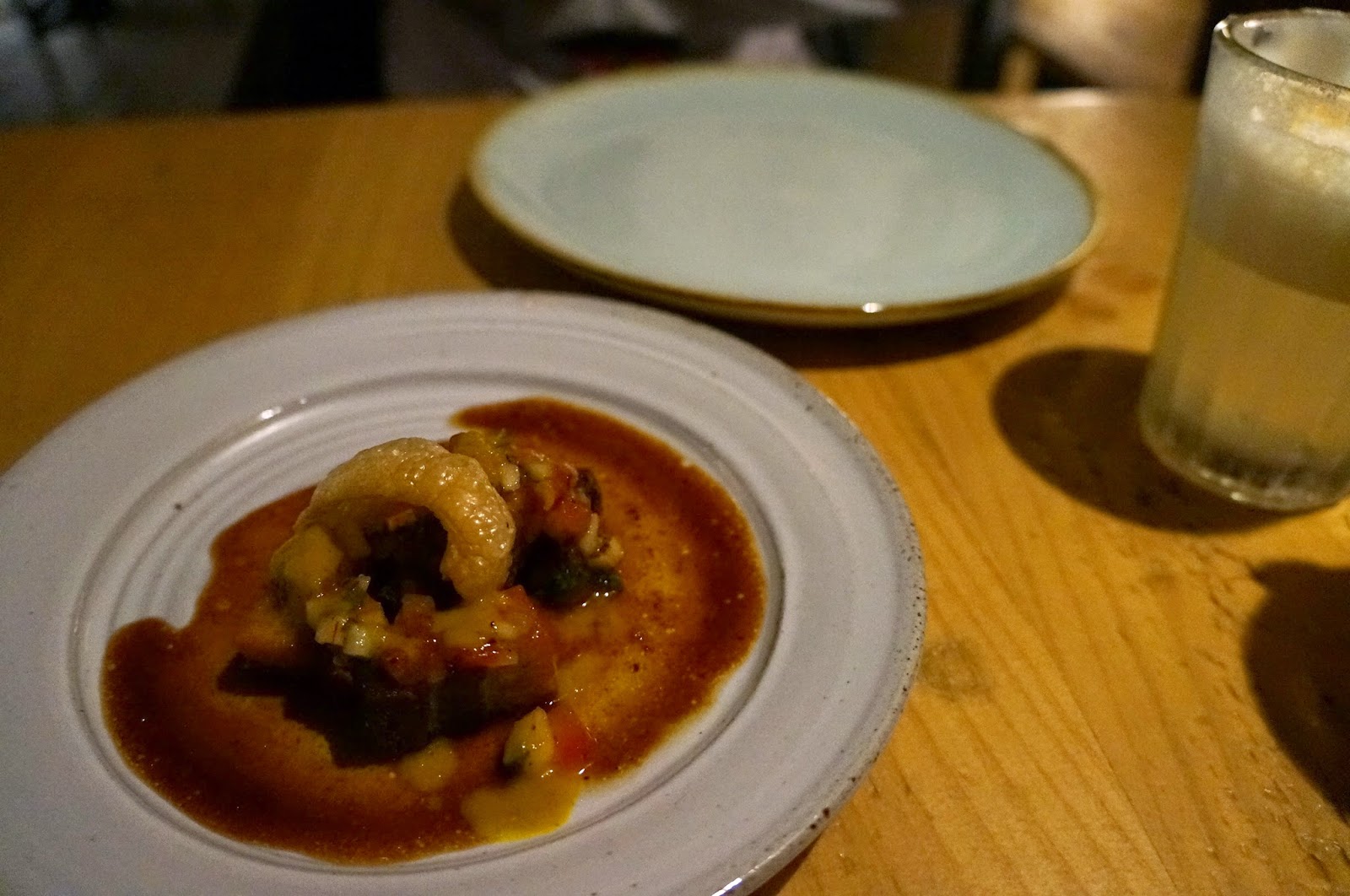 When the chicharrones did arrive, Shan’s Peruvian experience suddenly dawned on him that it was a play on Chicharron (how this escaped him at first I have no excuse for), which is deep-fried pork rind; chicharrones is the mini version and hence the tiny blocks of pork belly with a semi-transparent rind of crackling - I suppose our waitress’s explanation wasn’t totally inaccurate. Anyhow this little palate teaser was very enjoyable, especially the cracking, which was delicately brittle and airily crispy.  The deep-fried cubes of pork were inevitably a tad dry on the outside given how small they were, but all good with the sweet onion jus. I like how much work they have put into something so tiny. 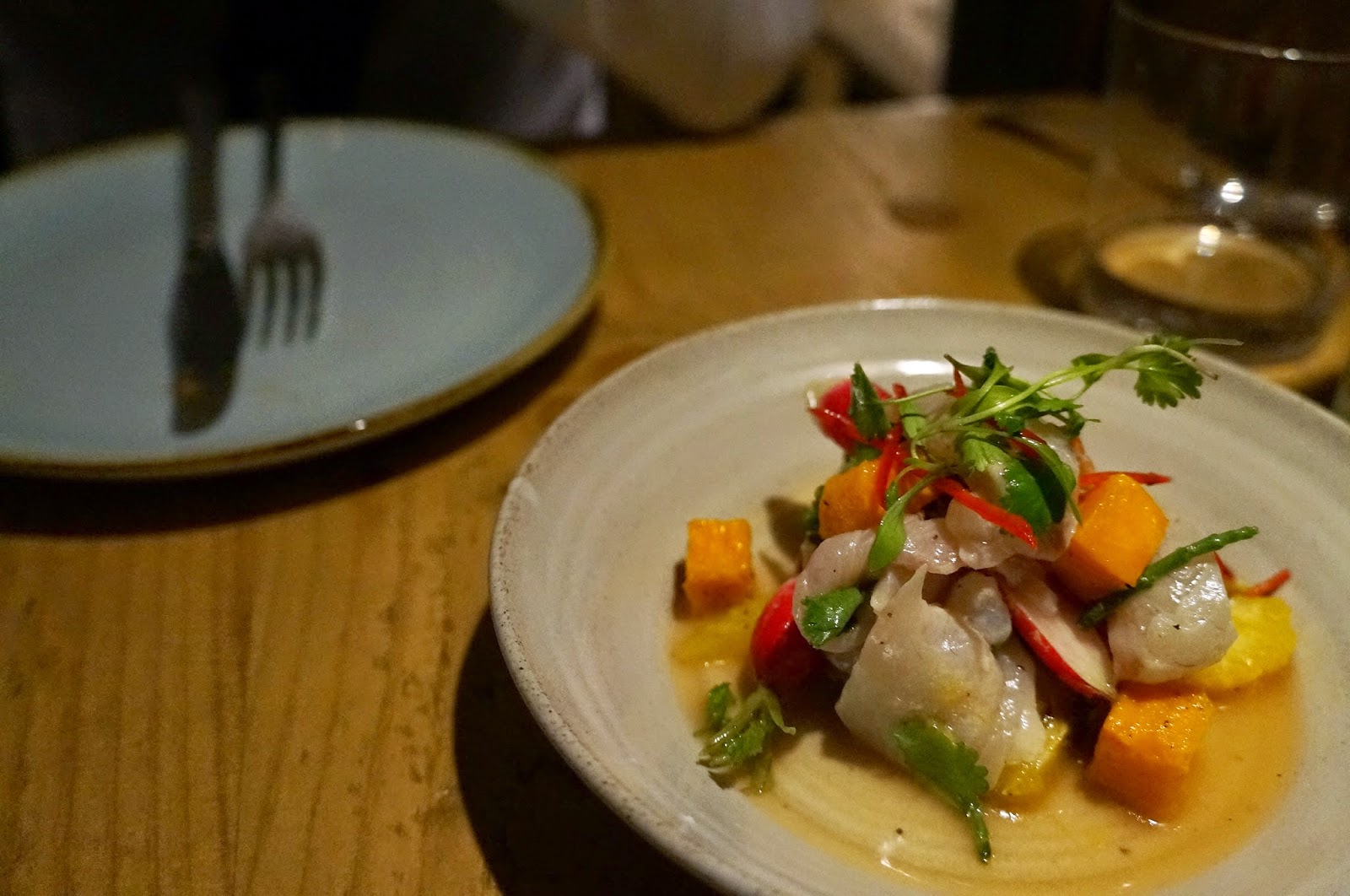 We went for the most traditional ceviche dish. They didn’t go overboard with the lime juice here, citrusy enough to be refreshing without damaging my tastebuds with acidity. I think there were also some plantain to beef up the dish along with the sweet potatoes. For me, the grainy and mushy textures don't work with the bouncy fish, perhaps something crunchy like apple or pear? Apparently you’d get much bigger portions and thicker slices of sea bass in Peru – ah, this is only Peruvian-inspire, remember? 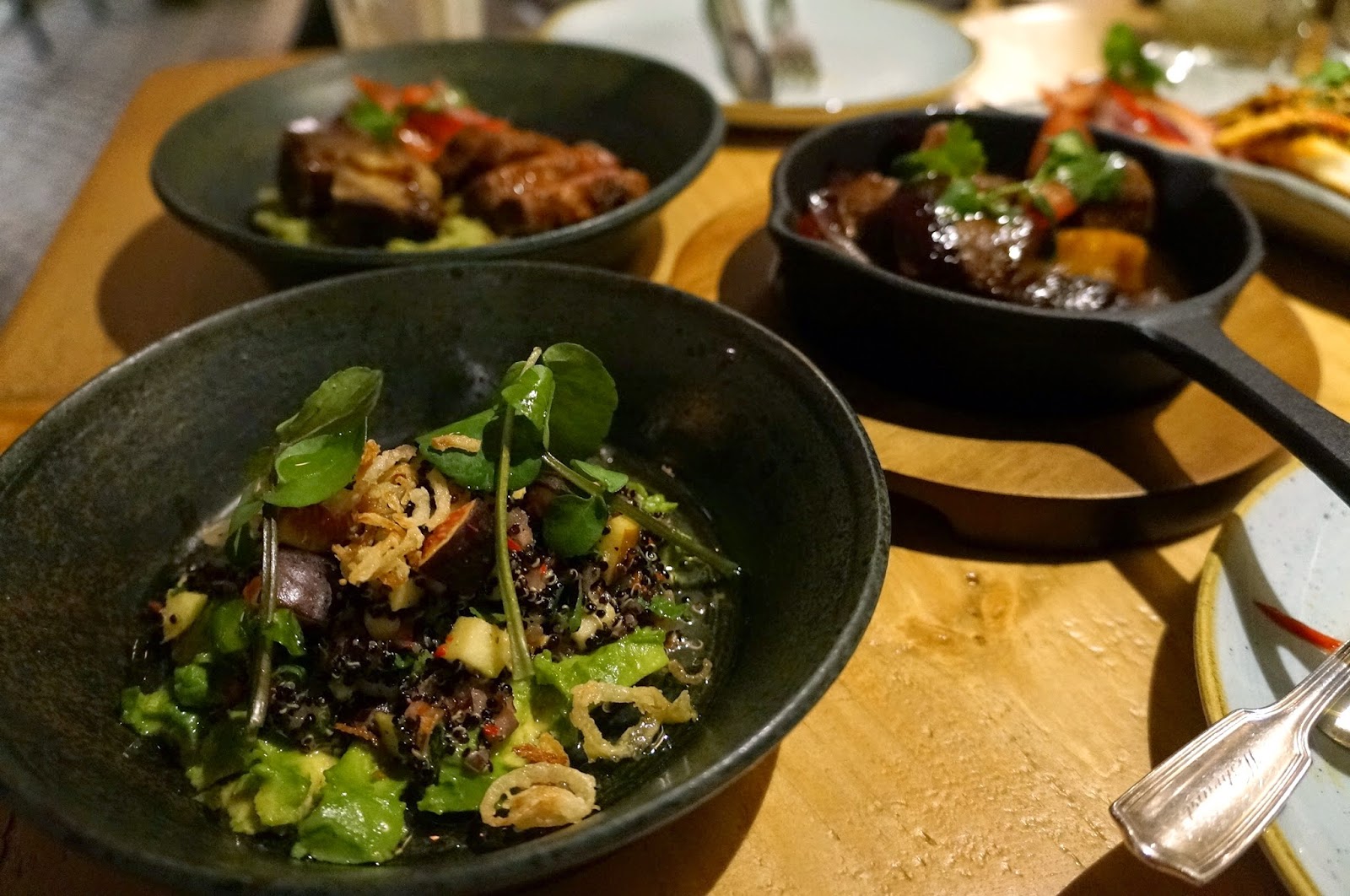 Yea neither of us recognised the quinoa here, must be the middle-class variation. It was a good salad, plenty of crunch with a light, crisp dressing... just nothing worth writing home about.

For our second round of cocktails, Shan had the Mama’s Pisco, which was not dissimilar to the Eau de Lima; my Pinamama was much stronger and syrupy. 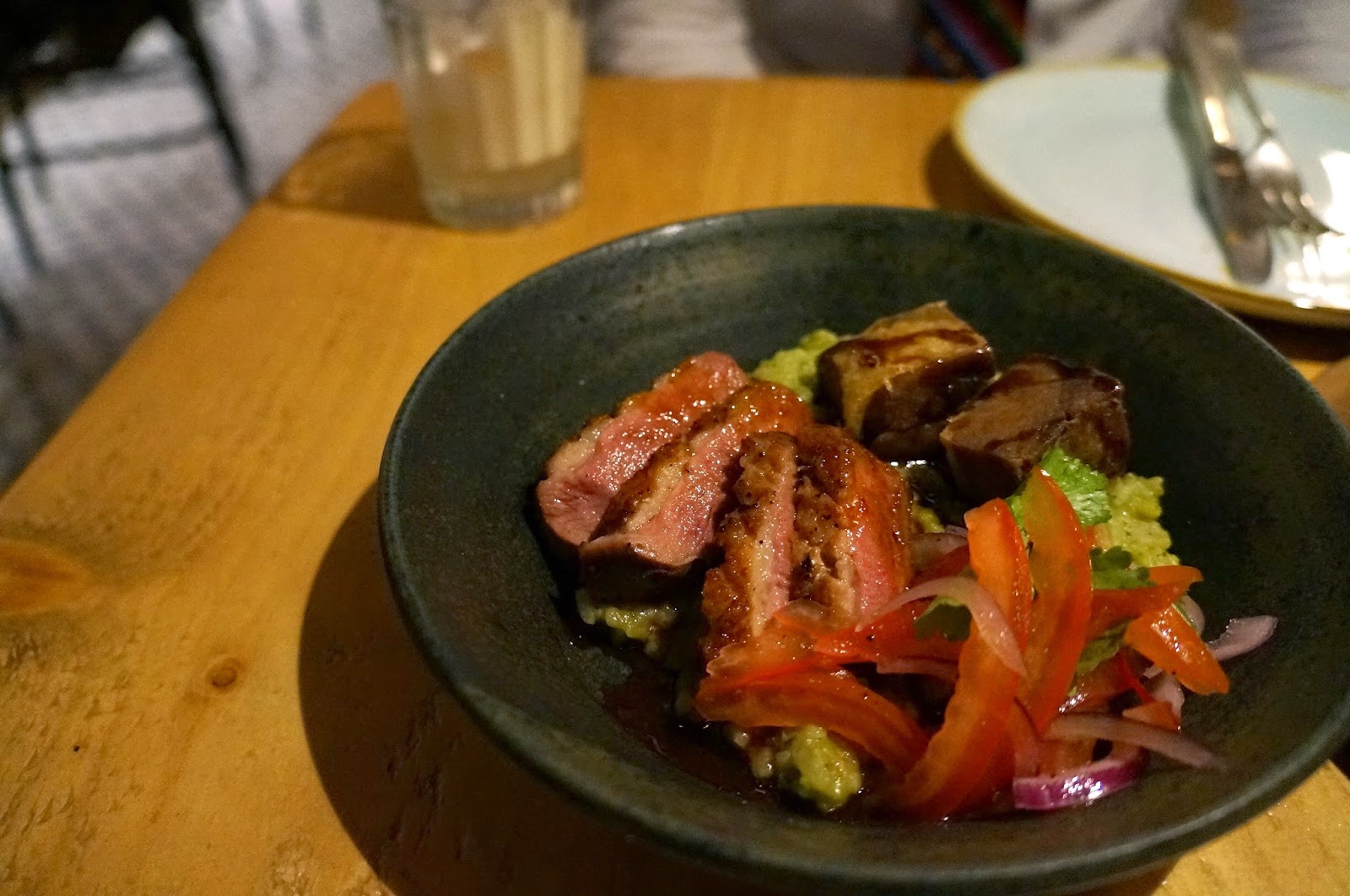 This was a signature dish at one of the posh restaurants in Lima.  The coriander-infused rice was fragrant and moist, topped with thick slices of roast duck with a generous layer of fat under the skin. The duck was cooked to medium-well, tender and succulent, with a drizzle of what reminded me of sweet soy sauce. There were also two cubes of dark meat laced with tendons on the side, which were much denser and coarser in texture, but held more intense flavours. Shan thought this version was okay, the rice was too damp as the one he had was more akin to fried rice. I quite enjoyed it. 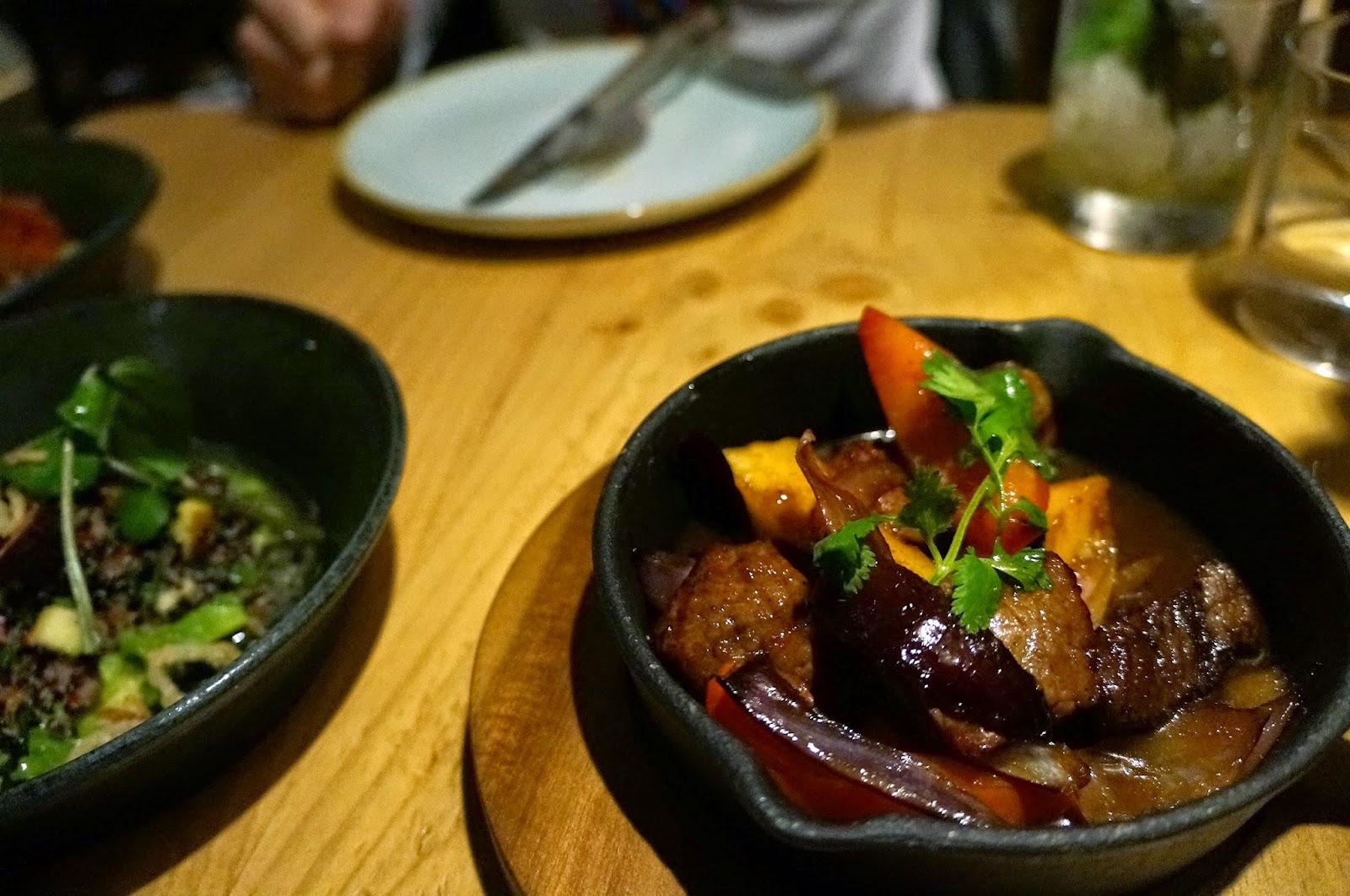 This was disappointing. Had this not been a Peruvian-inspired restaurant, this would have passed as “stir-fry beef in oyster sauce” from any cheap Chinese takeaway shop, perhaps under the sizzler section if you were eating-in. The sliced rib-eye was overcooked to sinewy coarseness, lacked bovine flavours in the meat as all the juices escaped from the excessive cooking, then drowned in a viscous, sugary glaze. Could have done exactly the same with rump or chuck.

Again, overcooked. The octopus tentacles were left on the grill for too long, leaving them rubbery and chewy, lifelessly matt without a glimmering finish. The seafood sweetness has been extinguished, all I could taste was the smoky bitterness from the grill and the salty, pungent capers puree. I did like the purple potato mash though, I remember having diced purple potato at Lima and thought they were crunchy and undercooked. The puree here had a faint trace of sweetness, a bit like taro. 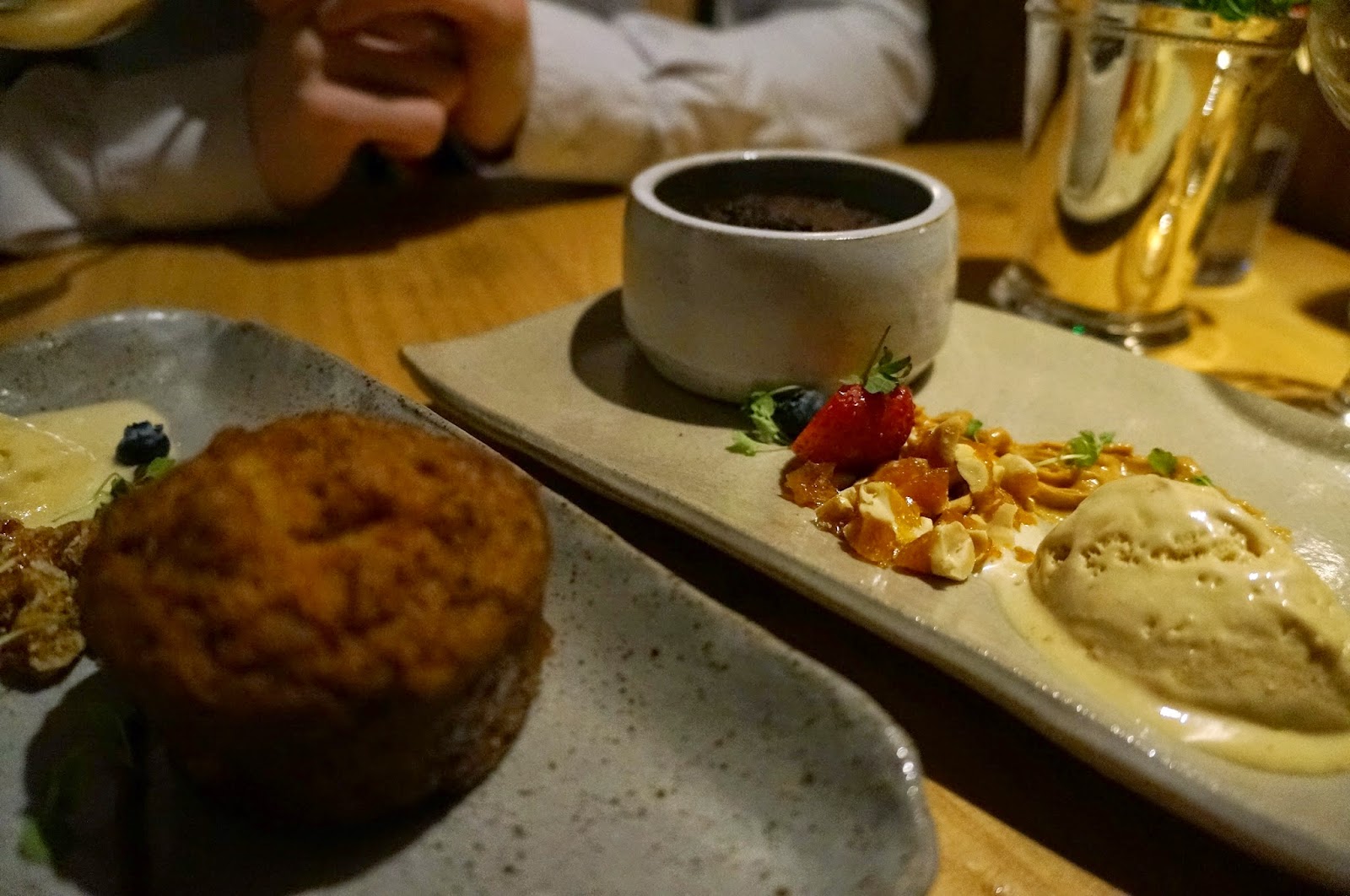 Pachamama says they serve Peruvian-inspired cuisine – essentially it’s their get-out-of-jail card when it comes to authenticity – a bit of a cop out really considering the menu is made up of well-recognised Peruvian dishes. The food could have been better, and since they didn’t have to stick to traditional recipes, the kitchen could have used more imagination in their dishes so we get our money’s worth, seeing this entire meal would have cost under £10 in Peru. Out of the Peruvian restaurants I have been to, inspired or not, I would say Ceviche in Soho or Andina in Shoreditch is more intriguing with a more exciting menu, and definitely a more relaxed South American vibe. Then again, they don’t have a DJ that was set on drowning out conversations.