*Scroll straight down to Smack Lobster if you haven't got the time for how not to run a lobster shack.* 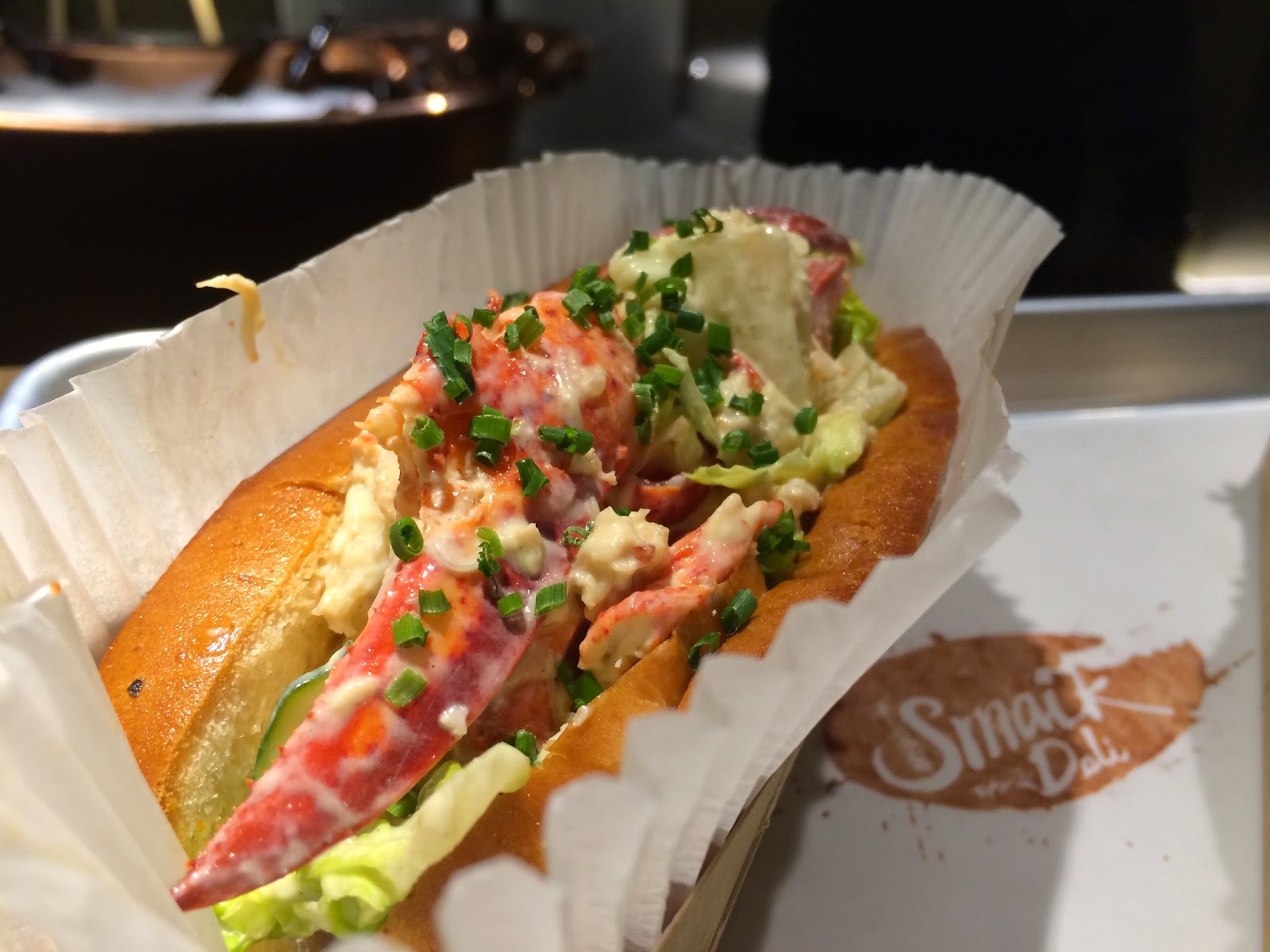 Where do I start with this Lobster Kitchen... literally. Shan and I both struggled to find it; the only signage it had was an A4-size laminated poster stuck on the stairs. It was their opening week and naturally there was a crowd drawn to their soft launch offer.

The automatic door got us playing musical chairs. Despite pushing the queue to the bottom of the stairs in the biting cold, the automatic door was still having its spasms, swinging wide open every 2 seconds because the waitress forgot there is also a sensor from the inside, next to which she sat a group a of 3. Every time the door opened, it sent a gush of Arctic wind into the tiny restaurant, so everyone was desperate to nudge closer to the kitchen end, which was giving off waves of greasy warmth from the deep fryer and mini portable grilling machines. With the random painted wood block dotted around the place, the crowd huddling for warmth and awkward movement in the cramped space, we definitely felt like we were in the middle of the sea, getting smuggled across the ocean.

We shifted places 3 times and ended up in the middle of the large table after witnessing 3 guys almost twisting their knees trying to get out of the bench without judo kicking their neighbours. We opted for a lobster roll, lobster tails and a lobster mac and cheese. As the cashier repeated my order, I pointed out he'd missed the mac and cheese. He said it was on the system, not to worry. And of course it wasn't and we didn't get it. With the 20-min wait in the freezing shack, I wasn't going to place another order.

Lobster Roll - The Garlicky One
Toasted brioche bun stuffed full with lobster claws and knuckles, finished off with chopped garlic sauteed in butter and fresh parsley 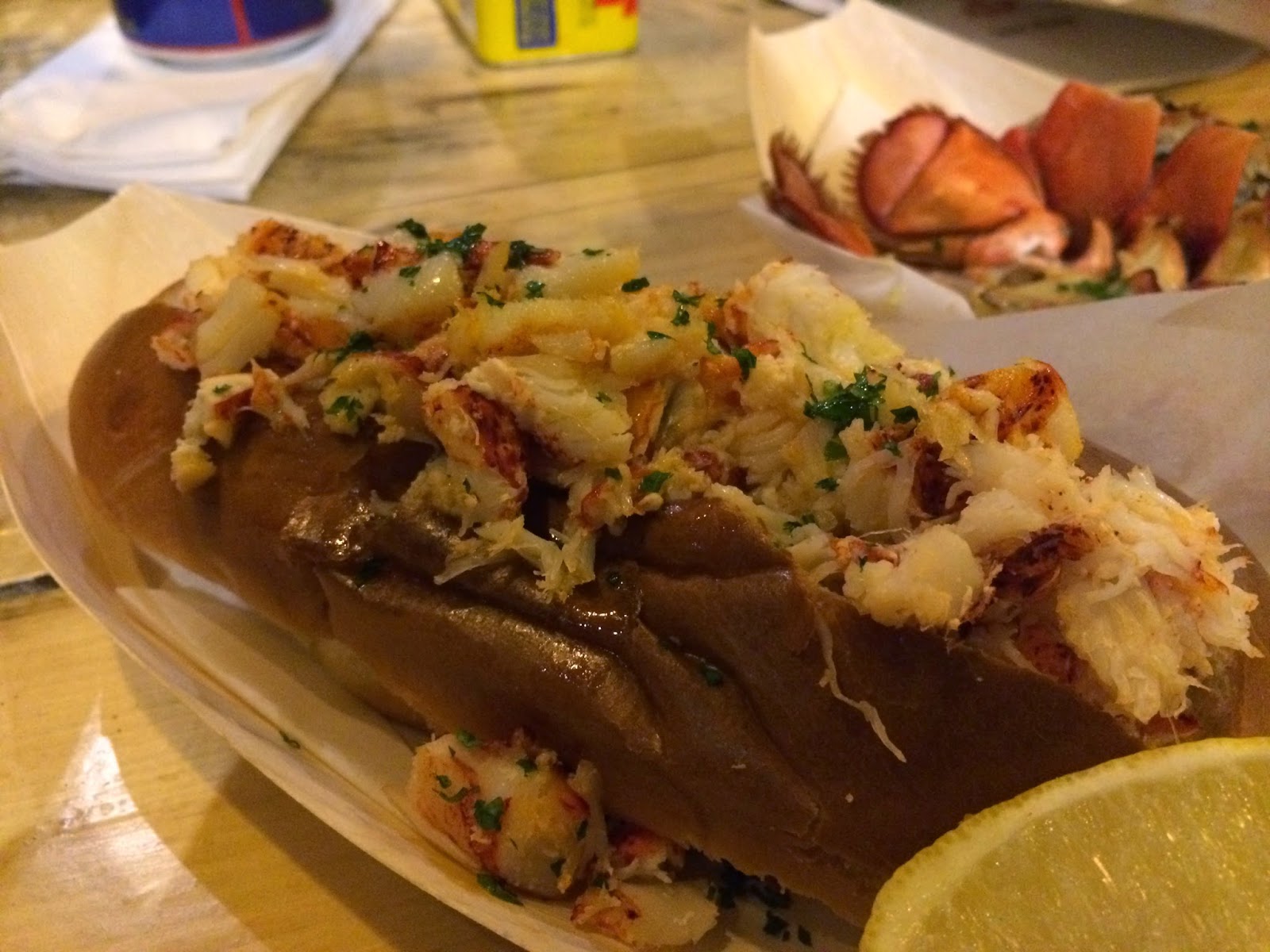 The roll wasn't warm enough; bread slightly stale and there wasn't enough dressing, which meant the whole thing was quite dry. It was very obvious the lobster was frozen stuff, no sweet shellfish juice or flavours coming from the meat, could have been shreds of seafood stick and that might have been more succulent.

For shredded frozen lobster meat stuffed in a half-toasted stale bun served on a paper boat with plastic cutlery in a shithole, they are demanding £15 (or £19 for a drink and a side). Why wouldn't I just thrown in another £5 for 2 sides at Burger and Lobster for the real deal? 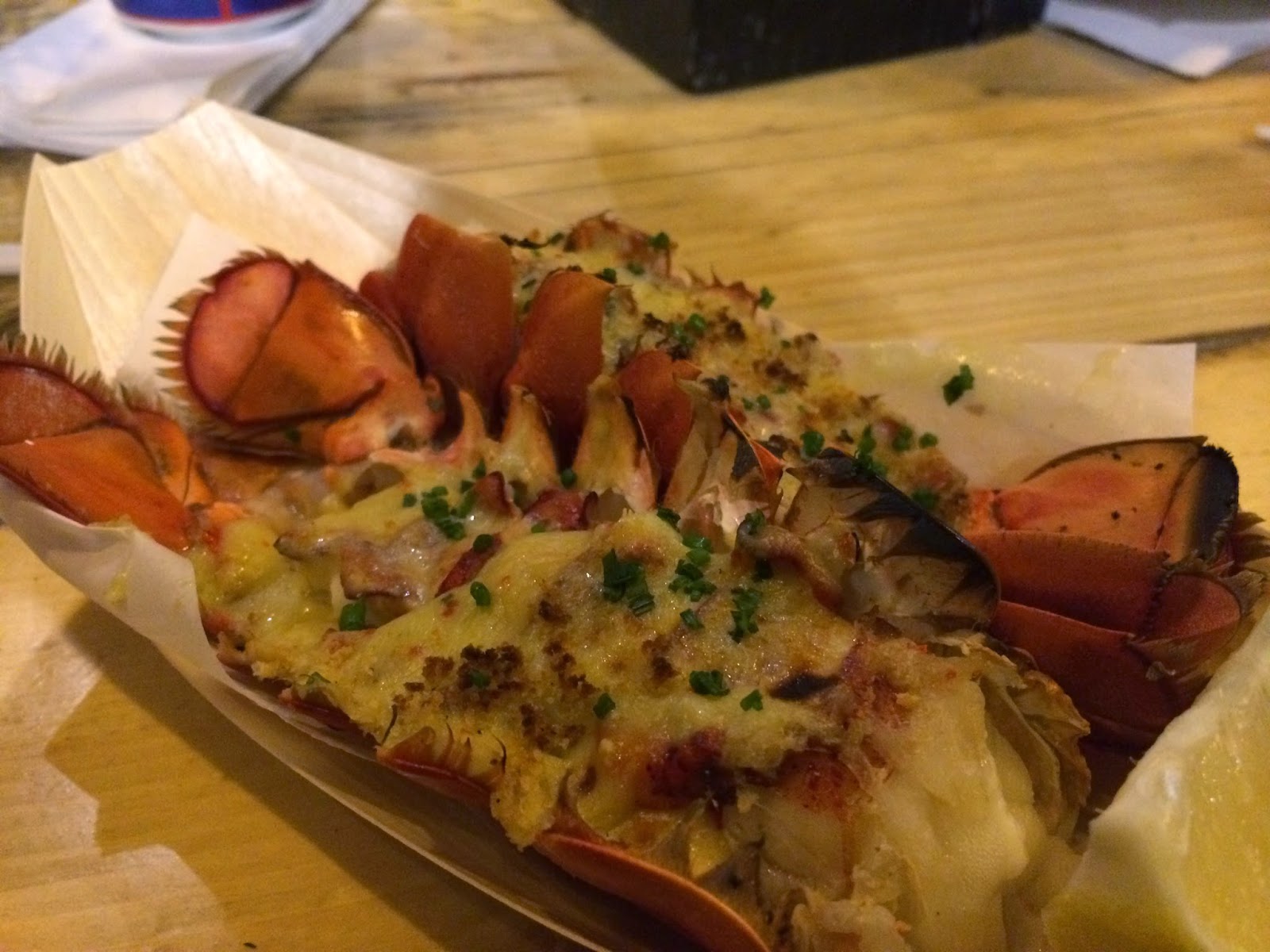 This was marginally better than the roll, perhaps it was because it had more surface area to smother the cheese sauce on. Definitely frozen tails too, as the muscle was dense and quite chewy, partly due to the overcooking. The good news is the meat wasn't unbreakable, still edible and the cheese topping was quite pleasant, but it didn't need to be on a lobster tail. At £17.50, I'd call the police and report robbery if we weren't getting 50% off. So instead I'm slating it all over the internet.

Without the 50% offer, the pricing is completely off the wall.

Shan and I were pretty deflated at this point - cold, hungry and mugged. Then he spoke my favourite words of the month, "Shall we check out Smack Lobster?" The good stuff starts here.

As we made our way along Oxford Street with the Christmas lights, we felt the first snow of the year. I wasn't exaggerating when I said it was a cold night. 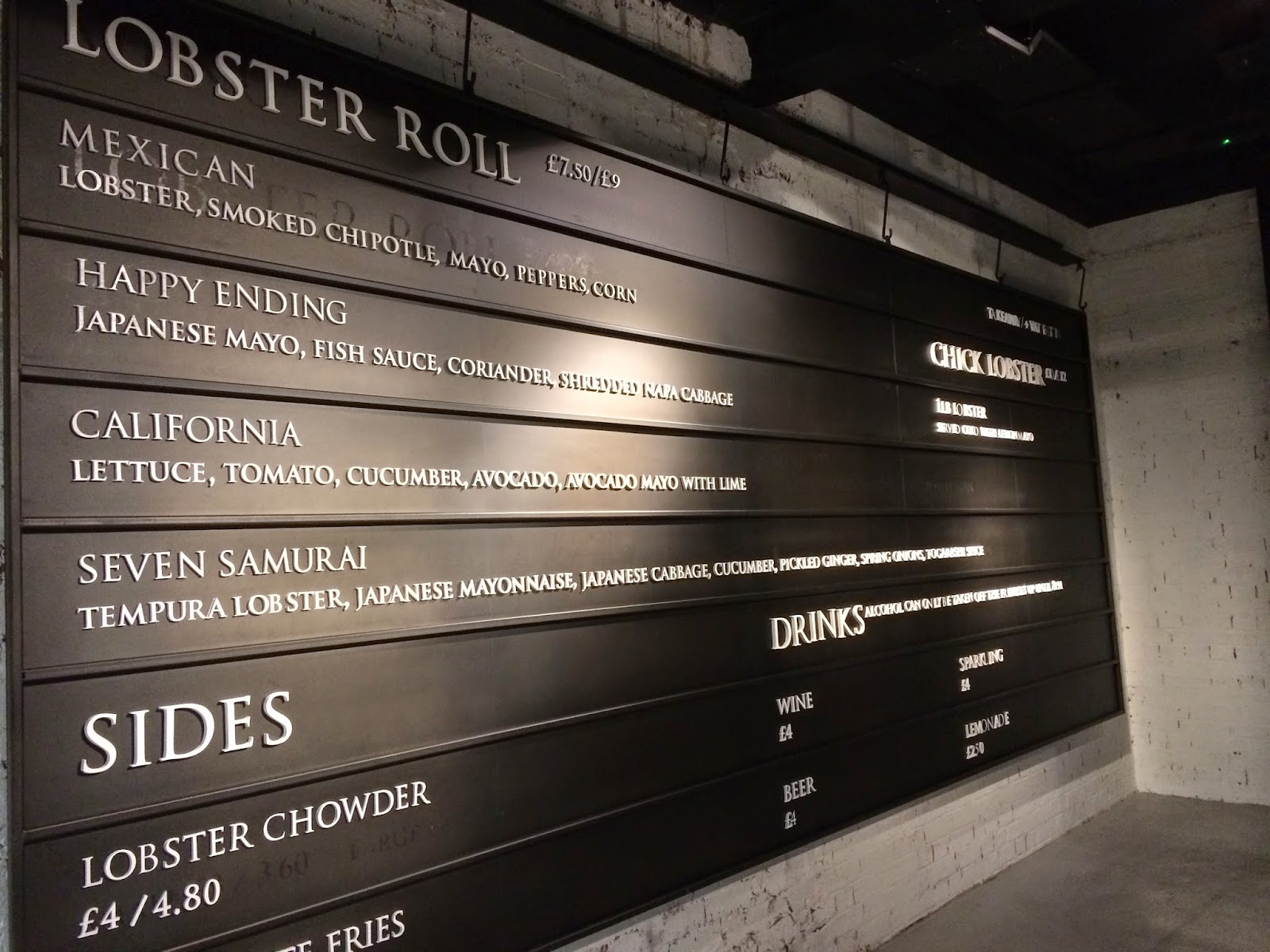 Smack Lobster is the newest project by the guys behind Burger & Lobster, Goodman and Beast. It was surprisingly quiet around 9:30pm, 4th night of their opening. The menu was plastered across the wall on a blackboard, and I would have order everything if I hadn't wasted space at Lobster Failure Kitchen - 4 types of lobster roll at £9 each (£7.50 to takeaway), lobster bisque or a chick lobster at £12.

We placed our order at the cashier and they were ready in about 5mins. Then we followed the sign that mentioned alcohol and naked women  downstairs. Instantly I fell in love with the space. It was like a gallery opening event. Granted it was almost empty, and it may have a very different vibe when it's packed with crazy Christmas shoppers, but on this particular evening, it was sexy, sophisticated and stylish. Narrow hanging benches with high stools, a couple of slow-mo topless lobster mermaids projected on the walls, and an ultra cool bar. Not the most usual place to find a bath, but I'm getting used to it - this tubs is filled with ice cold beer. We had a couple of reds from the tank. 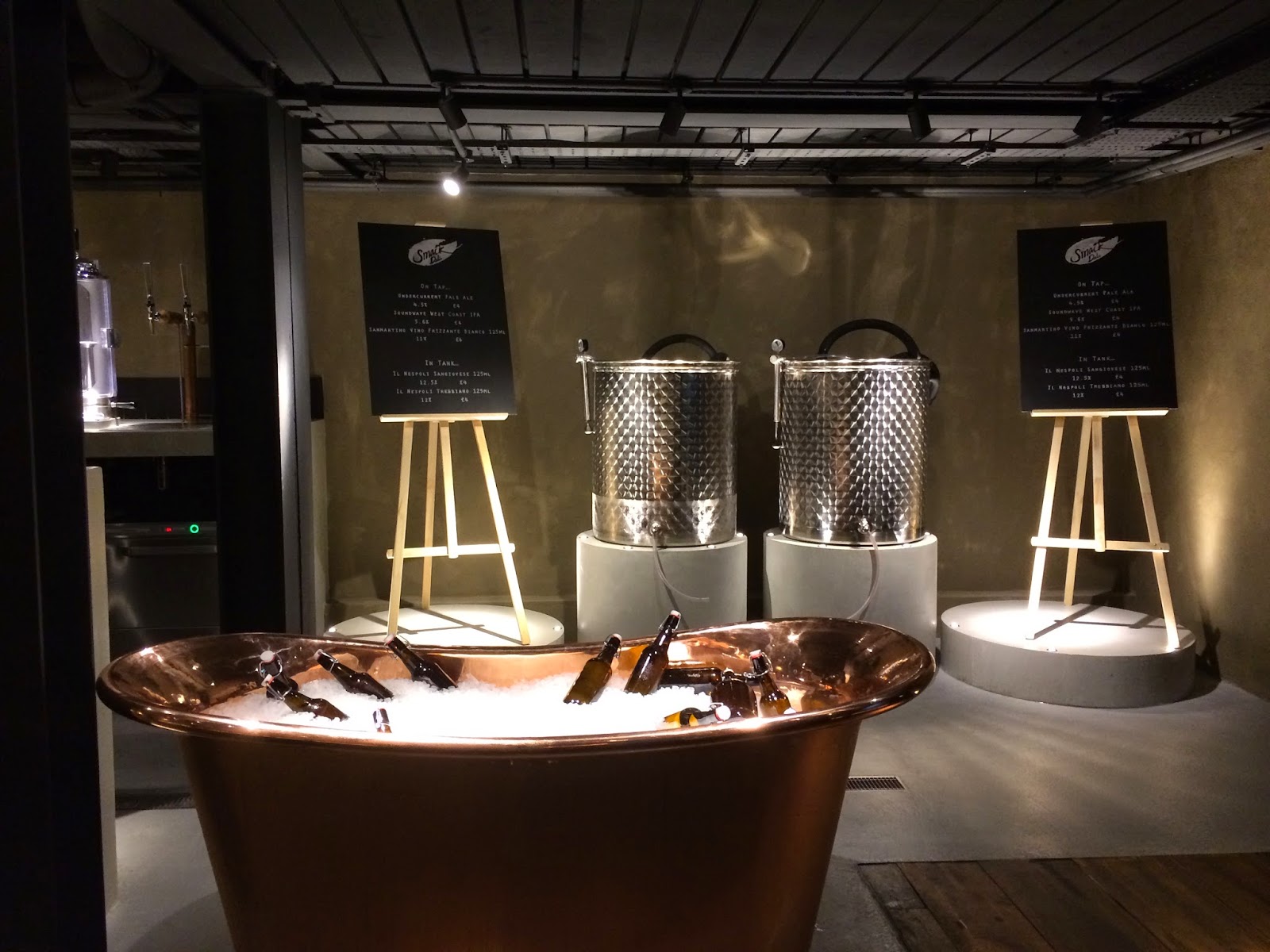 I was choosing between this and the seven samurai, which was a lobster tempura roll. The staff recommended this one.

Check out the claw and the real lobster meat. This is how a lobster roll should be done. And the brioche - oh the buttered grilled brioche - is out of this world. The combo worked well for me, creamy ripe avocado added extra smoothness and the L&T gave some refreshing crunch. I think, and it could be psychological, the roll at Burger and Lobster is packed with a higher density of lobster meat. But I can't be sure, and honestly, the lobster meat in this is plenty. 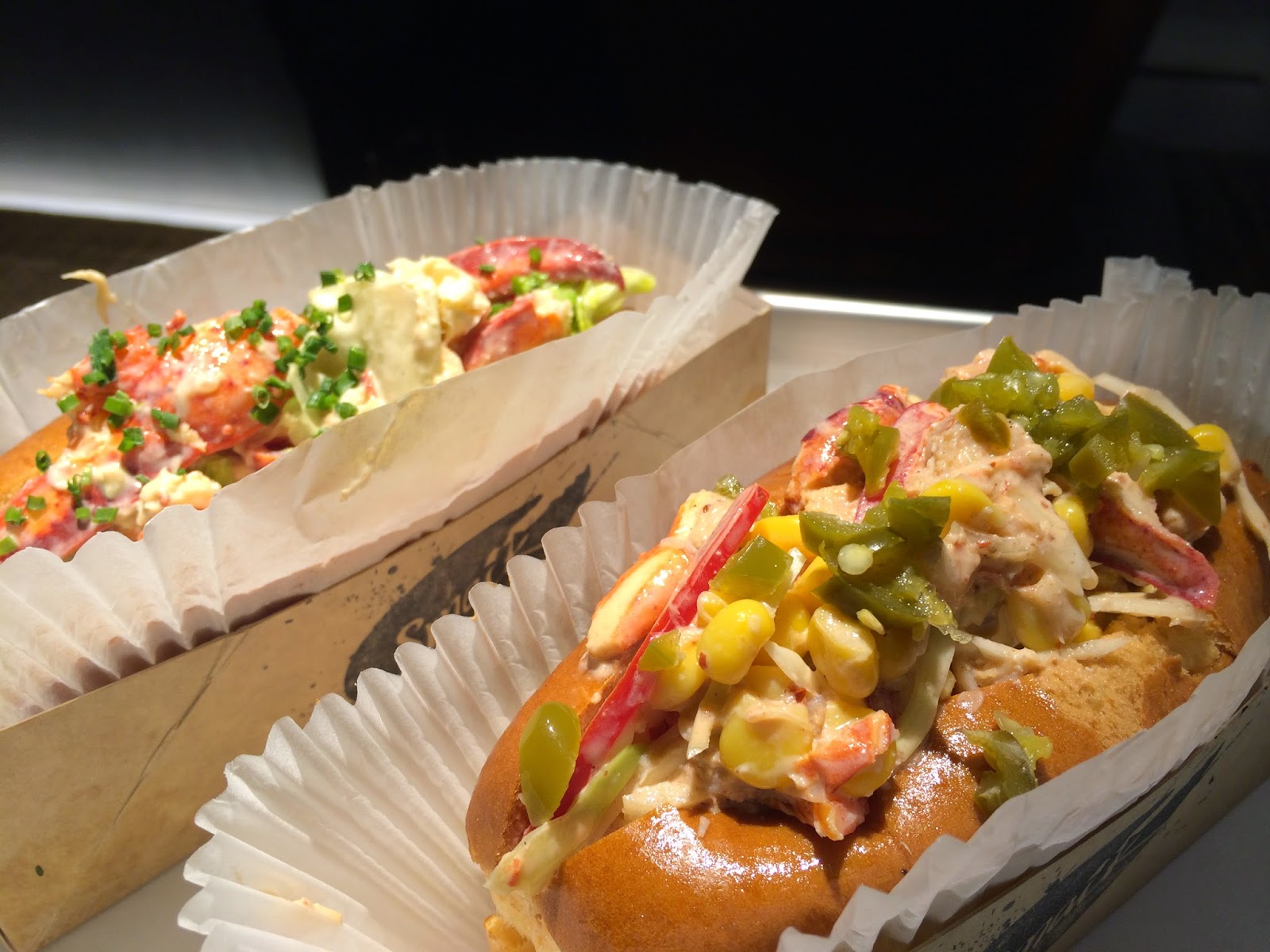 Shan's rolls had a bit of a kick to it from the peppers, but didn't kill the lobster sweetness. It had a good crunch from the sweetcorn, which Shan thought was slightly intrusive as it was canned sweetcorn and a tad too sugary for his liking. Personally I liked it because it neutralised the heat. All good.

I usually choose a whole grilled lobster over a lobster roll at B&L, purely because the roll gets demolished in 5 bites, then I'd be staring (perhaps drooling) as the rest of the table tears yet more lobster meat from the claws. Sometimes we share a roll as a starter, but it gets too much. Now all problems solved. I'm kind of excited about dragging Mister down here for his verdict, as he prefers the roll - can't wait to check out the lobster tempura and the chick lobster....

Smack Lobster is the best opening of the year.