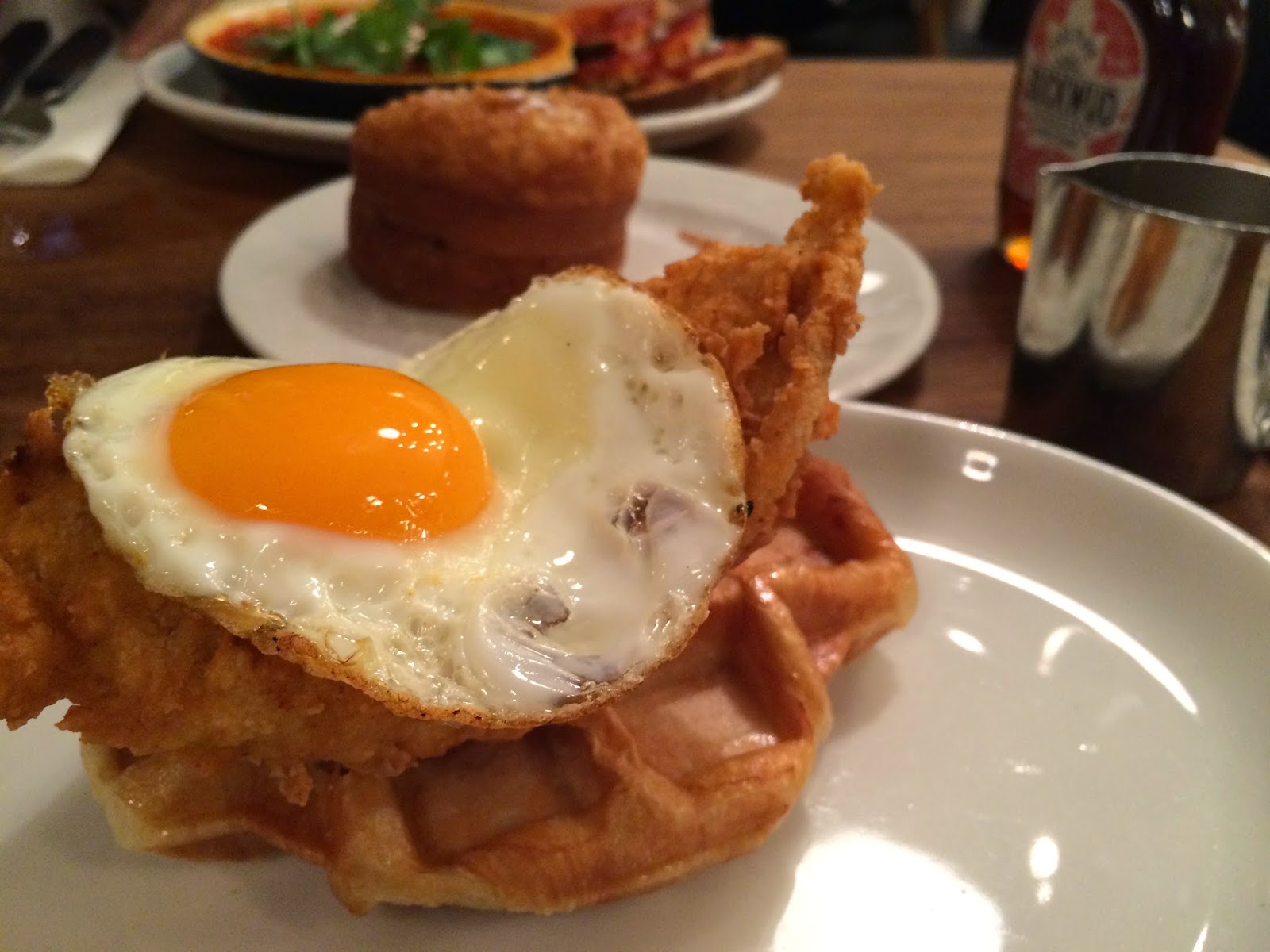 I’m sure I have mentioned it previously, but here goes – I love breakfasts. The next best thing from waking up to the smell of bacon is probably a good weekend brunch over gossips and giggles. For those who have had too many eggs royale or blueberry pancakes, there are alternative options to mix things up a bit. 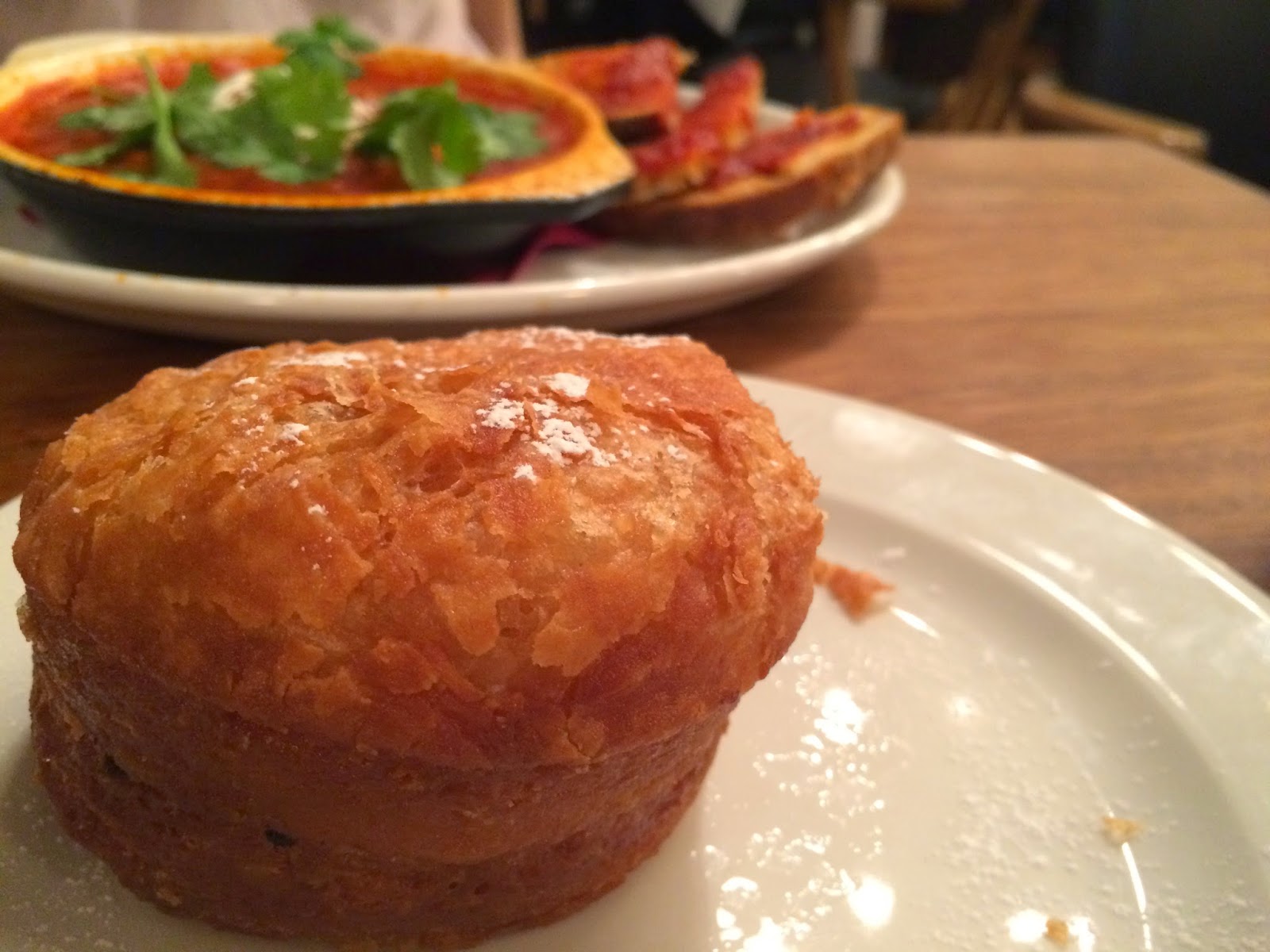 I’m struggling for words to describe how much I loved this. I have had various versions of cronuts, mainly sweet ones in New York, Melbourne and London. The general feeling was yea-it’s-good-I-quite-like-it, more than my-god-this-is-why-everyone-went-nuts. 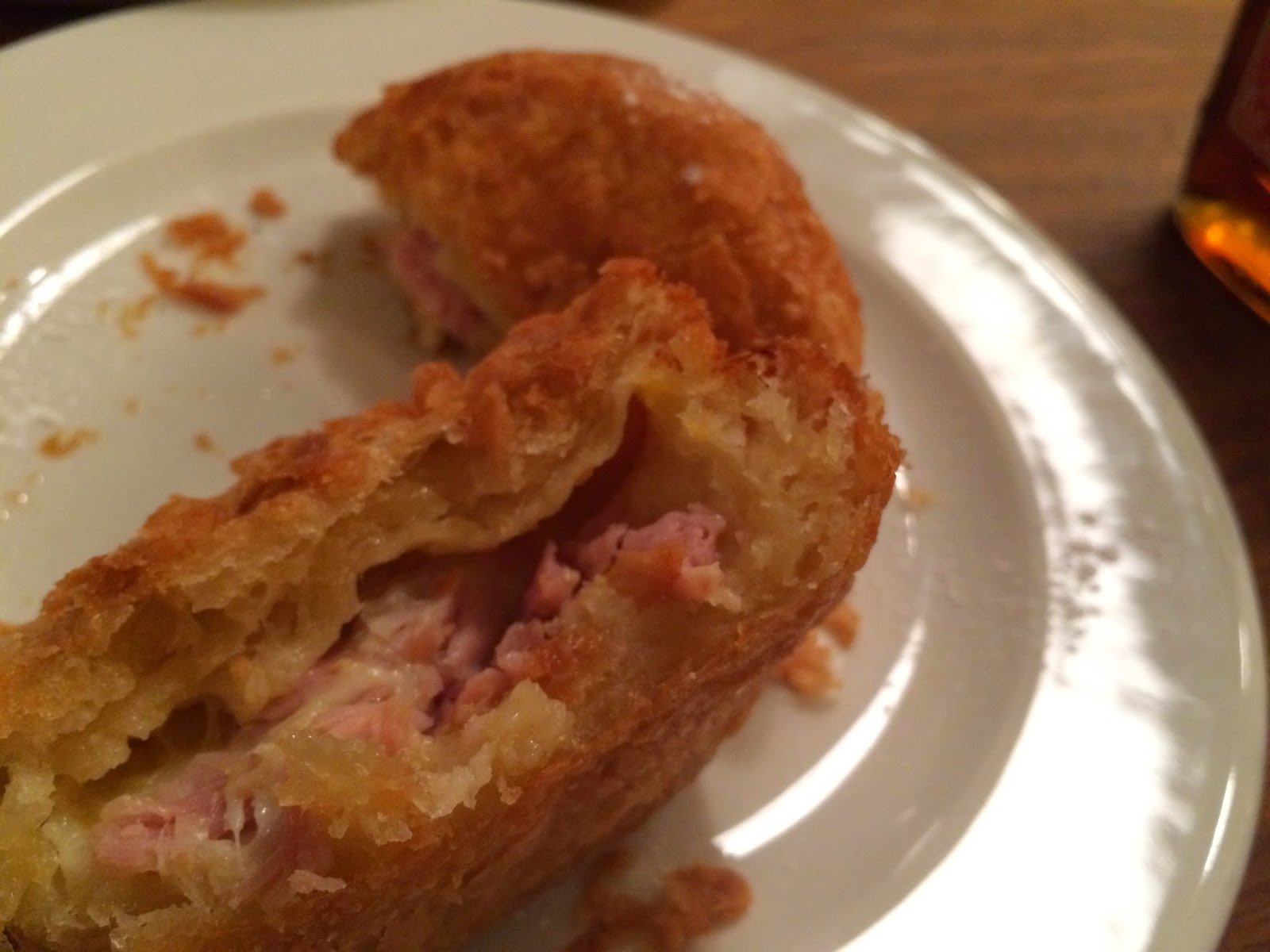 But this one was a different story. The brittle outer shell broke open to reveal the multi-layer of airy croissant pastry, from which hot, gooey cheese was oozing its way out with small bits of smoked ham. Ah.... enough said.

The chicken version of duck & waffle. The thick piece of chicken was succulent with a thin, crispy batter, delicious with the fragrant waffle that soaked up the maple syrup and the savoury gravy – bliss. 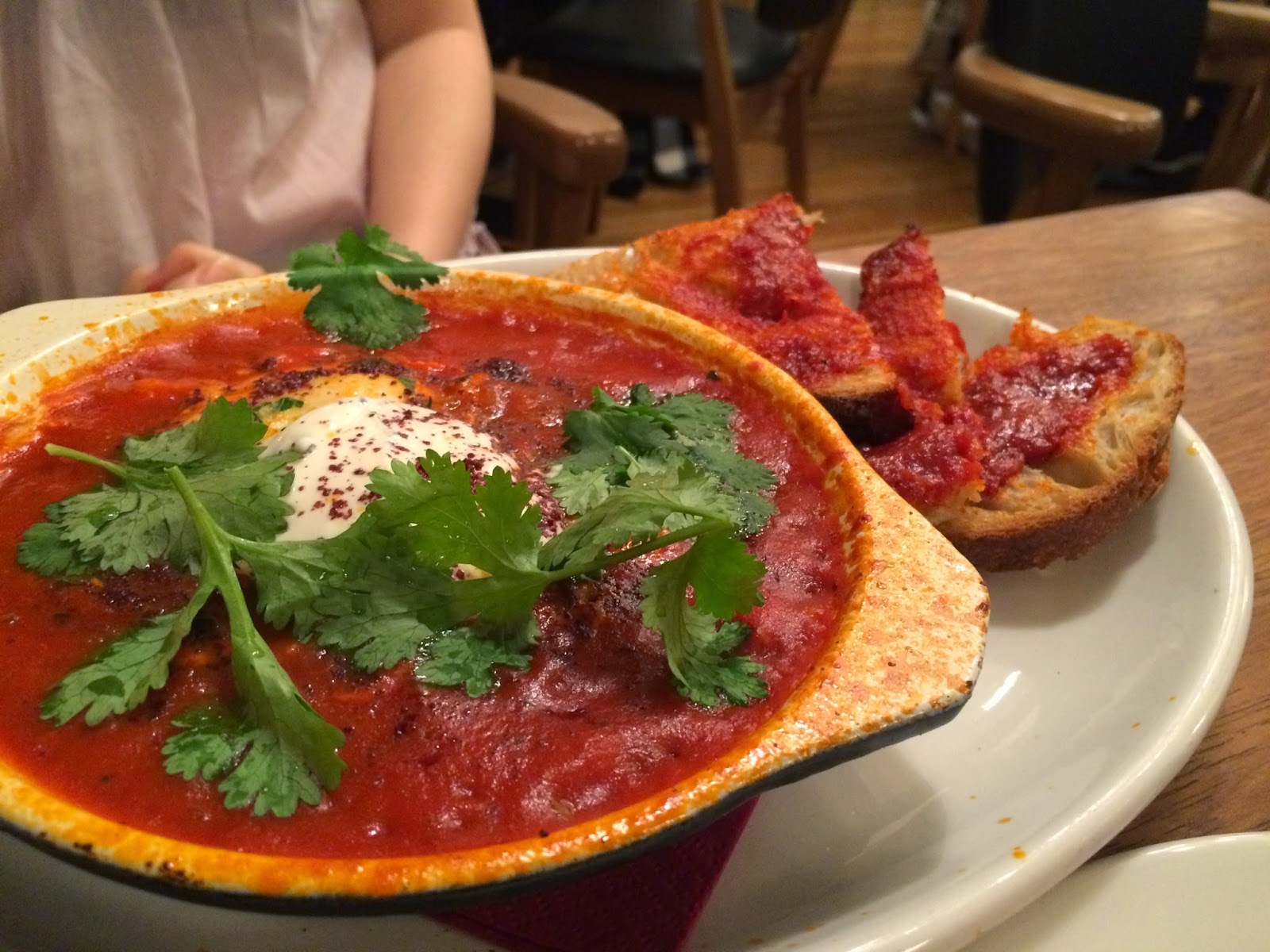 I tried convincing Fenny to go for the All Day Breakfast burger, but she opted for something less health-threatening and refreshingly delicious.

We finished off with an Elvis Presley sandwich with candied bacon (on the house). I’m going through an odd phase of insatiable bacon craving. 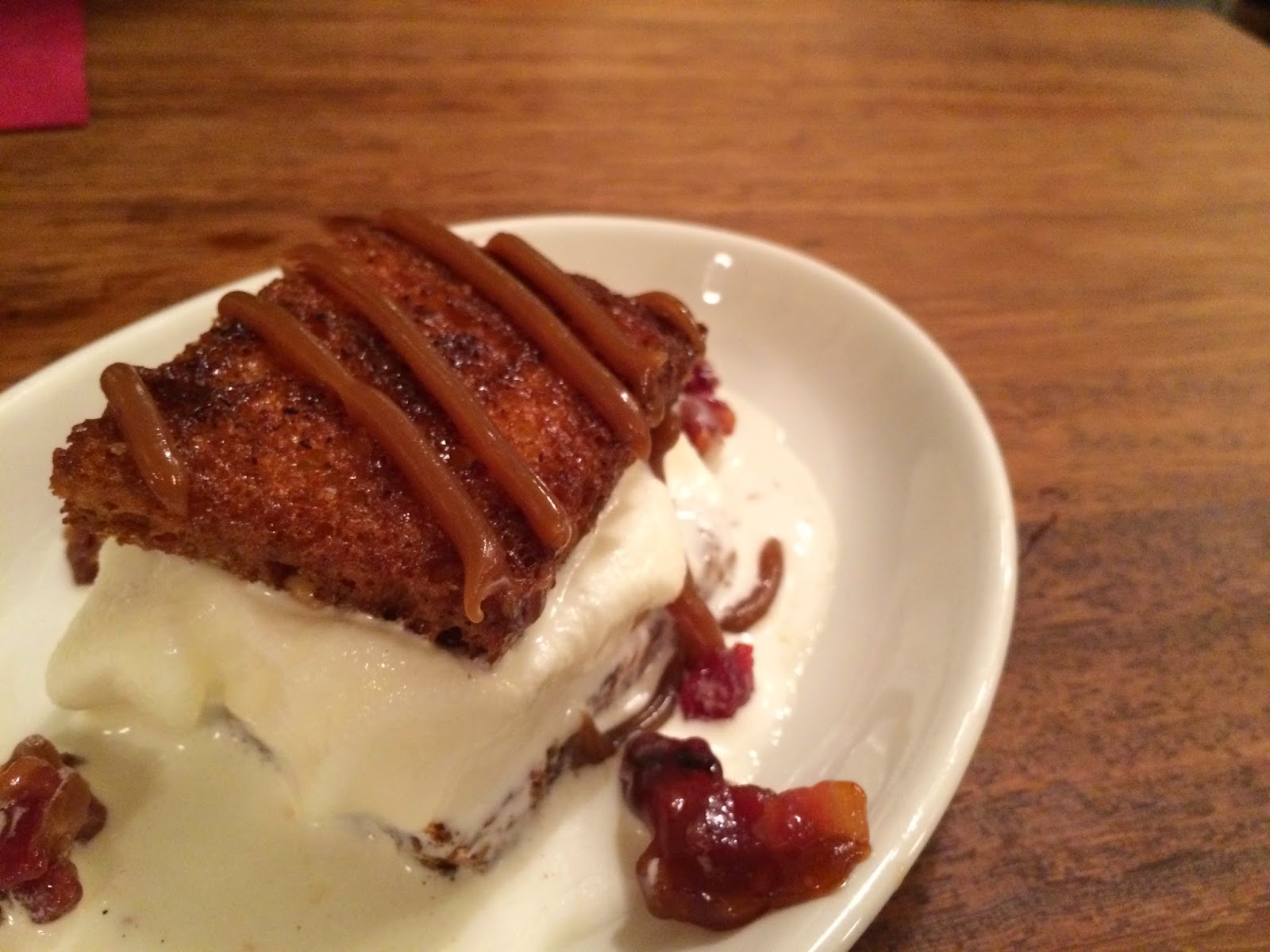 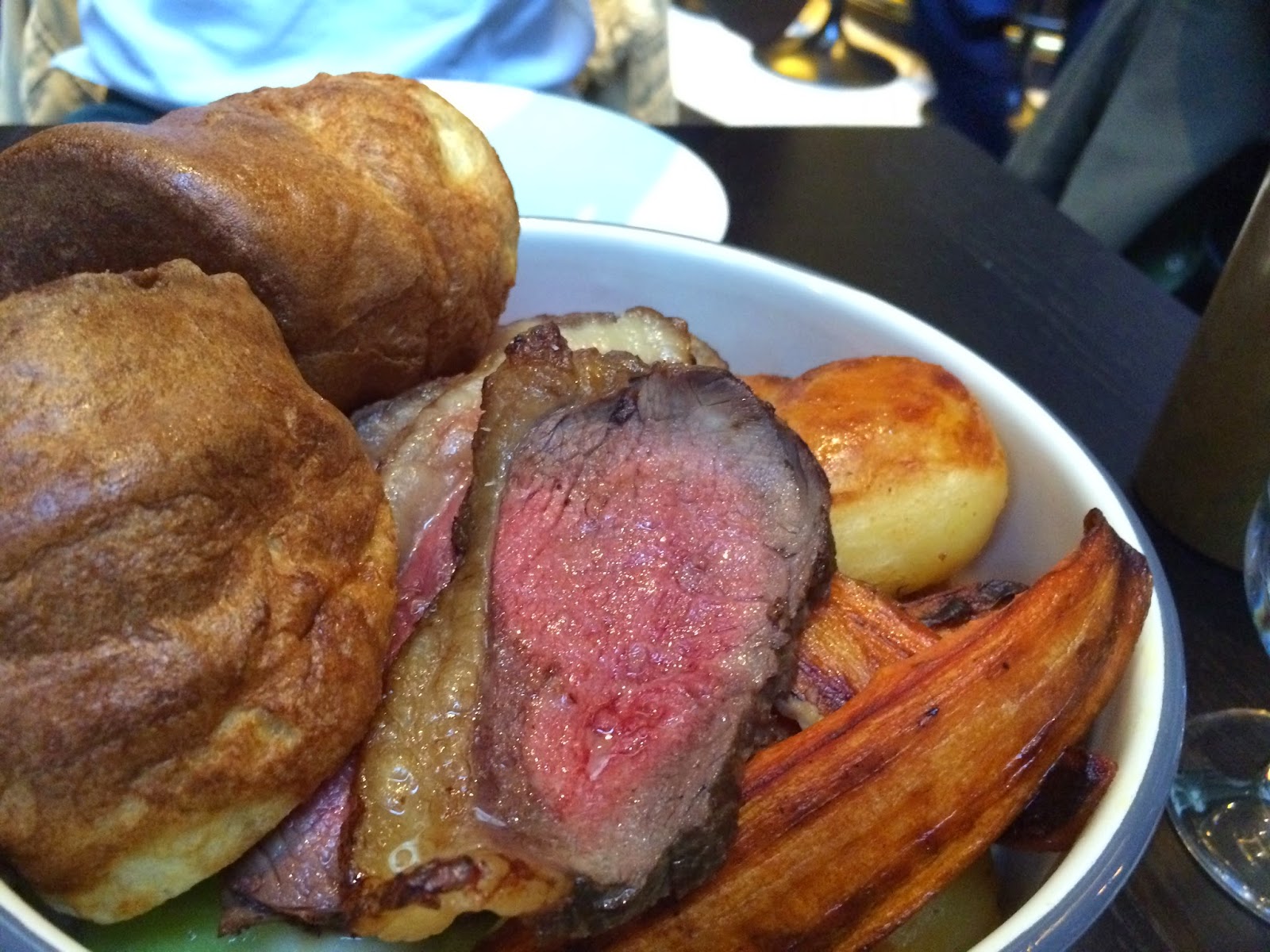 Not quite brunch I know, but I got in early to check out their roast with a 50% off, otherwise priced at £18.50 per person. And it was quite special. The beef was cooked to a beautiful ruby medium, and the thick rind of fat was a pleasant surprise (for me). The thick slices were juicy, tender and flavoursome, undoubtedly one of the better roasts I’ve had. If I had to pick out imperfections, then perhaps the fluffy potatoes could do with a bit more seasoning, and the cauliflower cheese were slightly dishevelled, but a very good roast overall.

I finished off with pain perdu, maple cream and crispy bacon and YF had an apple crumble with custard. Both were alright. 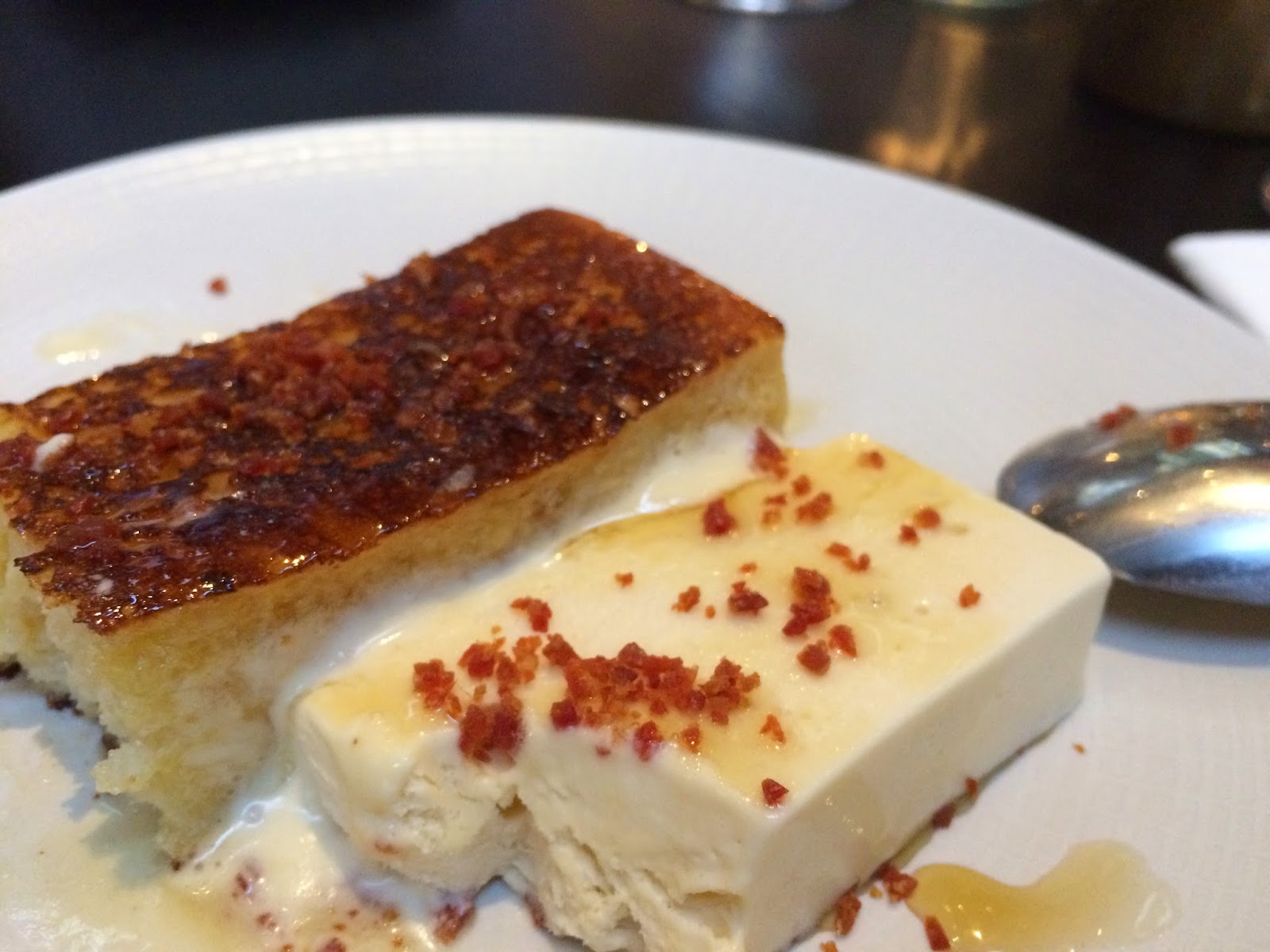 I popped downstairs to Shan and Clem’s table before heading, and had a cheeky bite of chicken liver mousse, bacon jam, toast. Oh yea. Bacon jam works. Might send the boys to Eat 17 to do some testing.

On a separate note – avoid sitting near the entrance as it gets incredibly chilly. And more importantly, I haven't heard great things about their usual menu. Apparently the sharing plates aren't big enough to share and dishes were rather ordinary. I have no idea.

Kipferl
It must have been a Sunday afternoon when I decided the queue at the Breakfast Club was simply never going to move, we popped into this cute Austrian cafe instead in Camden Passage. This place is mostly packed anyway, I suspect mostly because of the overflow from TBC, but it does have its own cosy charm. 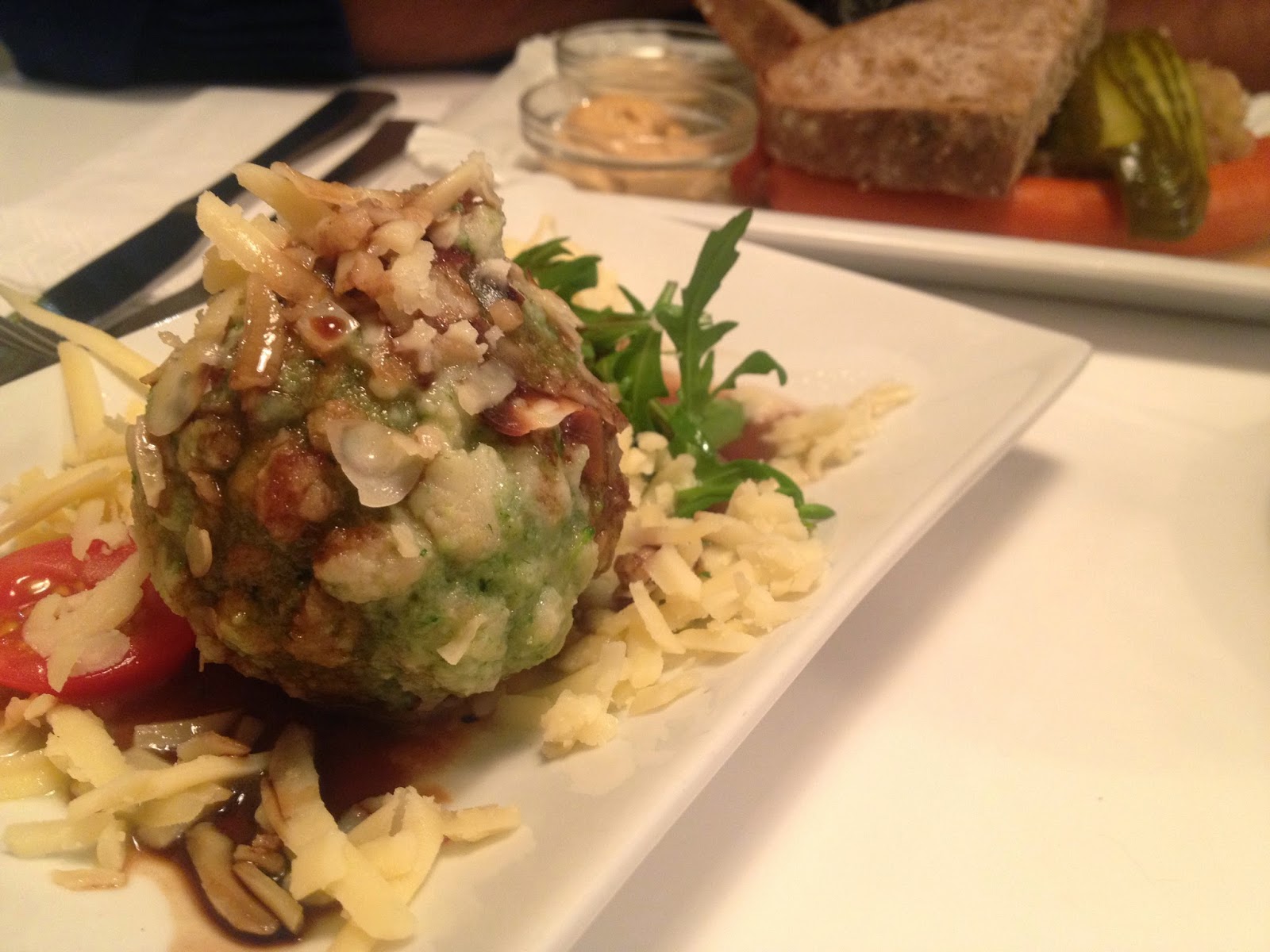 Yea it’s the Bavarian dumplings, not the Asian version with the thin pasta envelops. Doughy and definitely made less bland with the cheese. But really no match for the Chinese dumplings. 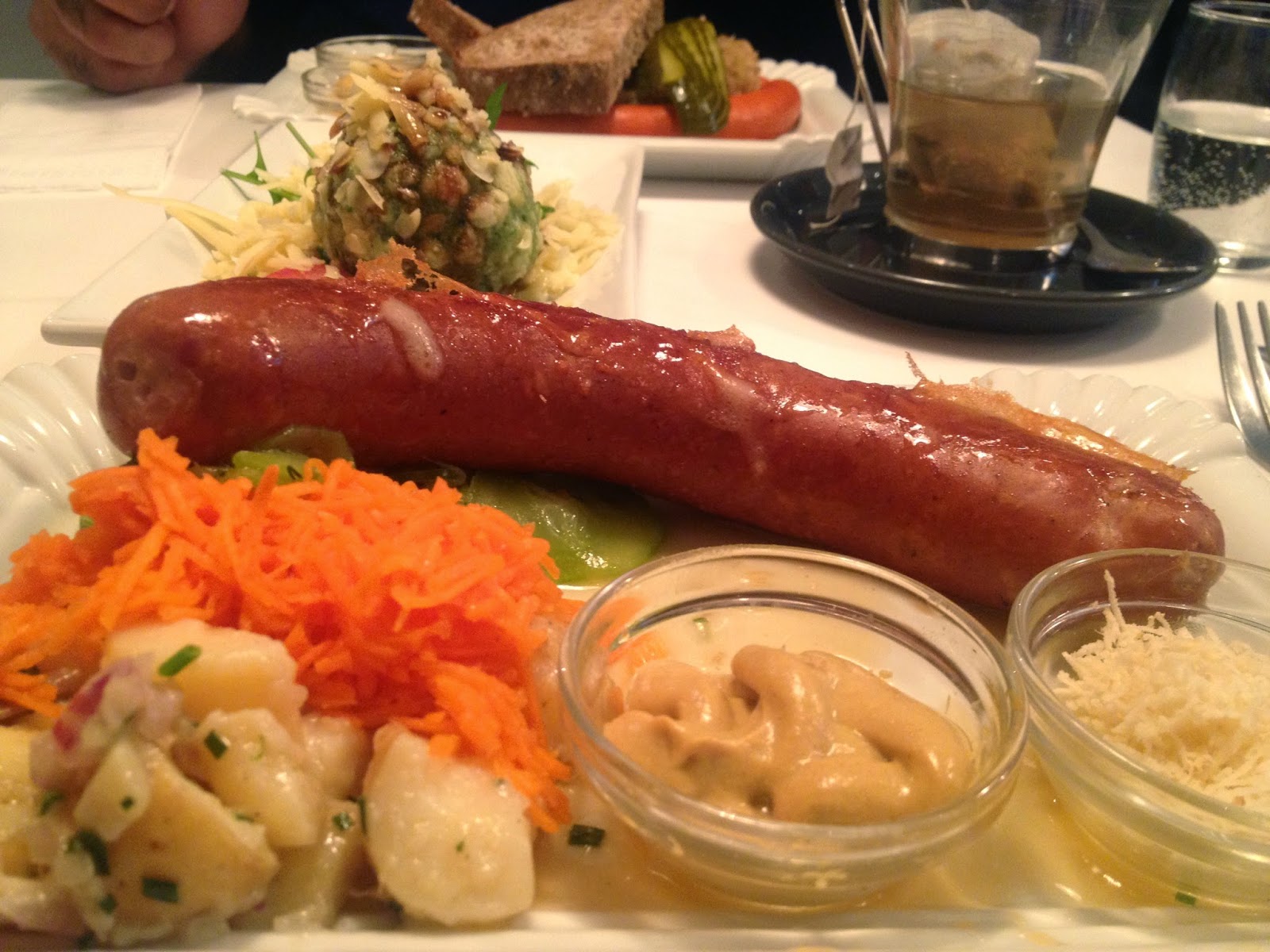 It depends how much you like your German sausage. For me, it represents Christmas – the Xmas market stalls that have a hanging barbeque with real coal and lots of sausage wieners; together with the joy of avoiding mustard on my scarf, balancing onions the dog and the numbing sensation on my front teeth after biting into the sausage fresh off the grill. Having them served on a plate is simply less exciting. That said the pickles and salads on the side make up for it, albeit cold, and it was a juicy sausage. What I love about Kipferl, is that it’s very un-London like. The closest thing to an English breakfast on the menu is bacon and eggs, and even that isn’t quite the usual version we get.

Cynthia and I came here for dinner once, and the menu was more or less the same. I genuinely don’t remember what we had, but I do remember it being a great evening.

Lantana
For those who prefer something more conventional, Lantana is another safe bet besides The Breakfast Club and Caravan and who doesn’t know Lantana... the Aussie cafe serves up some good coffee too. 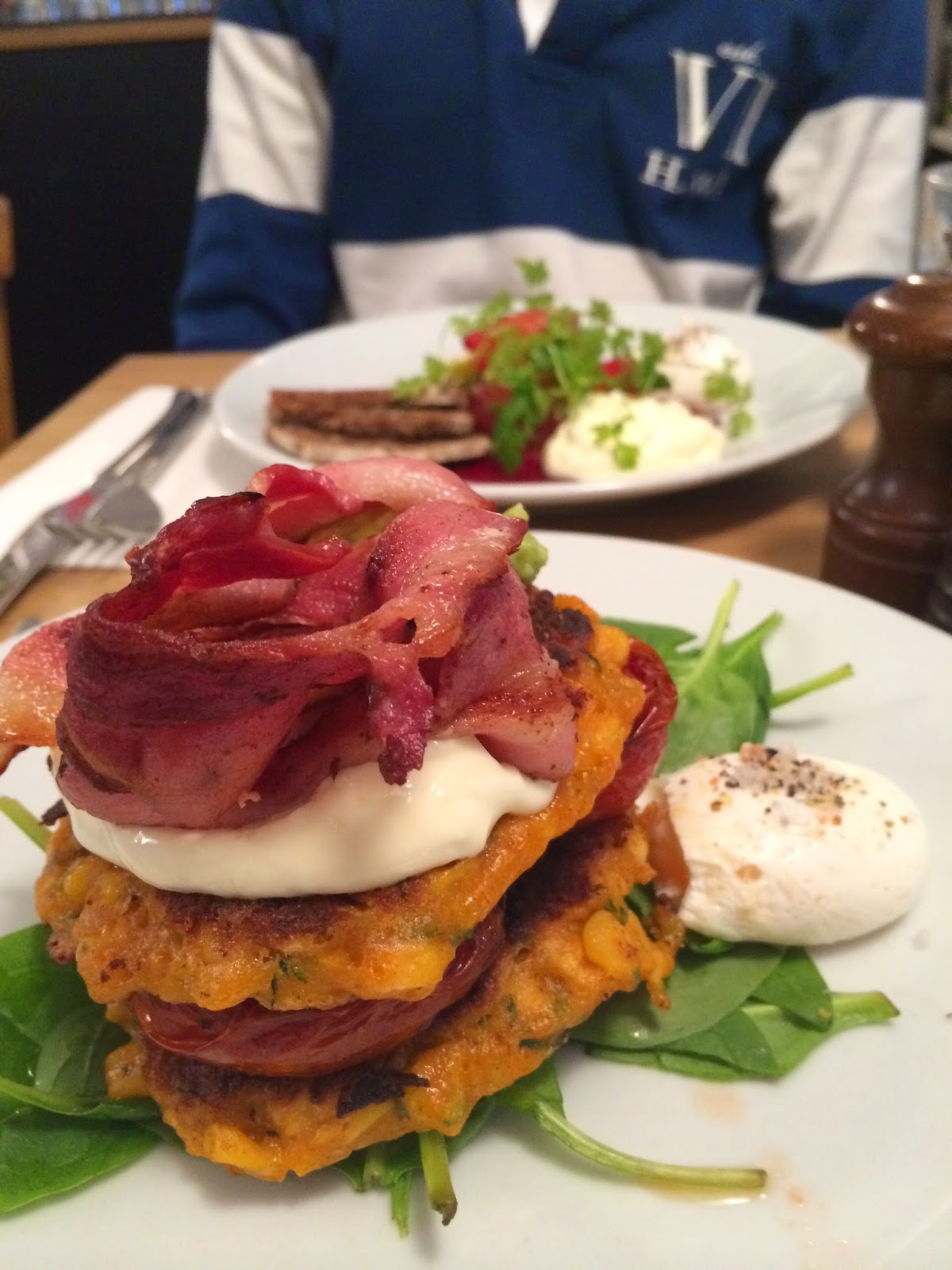 A pretty hearty plate. They do the best corn fritters in town I think, beats the ones at Granger & Co, with the crispy batter shell jam packed with plump, juicy corn niblets. The meaty bacon was grilled to a crunchy edge without drying out, mixed with creamy avocado mash and a custardy yolk – winner.

The cured salmon here is also worth a mention, though nowhere near as satisfying as the corn fritter.

Riding House Cafe
I wasn't head over heels when I first came here for dinner. But since their opening, I have frequented here for brunch as options are quite limited in the area. I think they have removed the steak and eggs from the weekend brunch menu, which was quite annoying because I loved it. Then I have been sticking to eggs royale. Mister beat me to getting the eggs royale today, and he even threw in spinach to perfect it. So I ventured into the unknown and got... 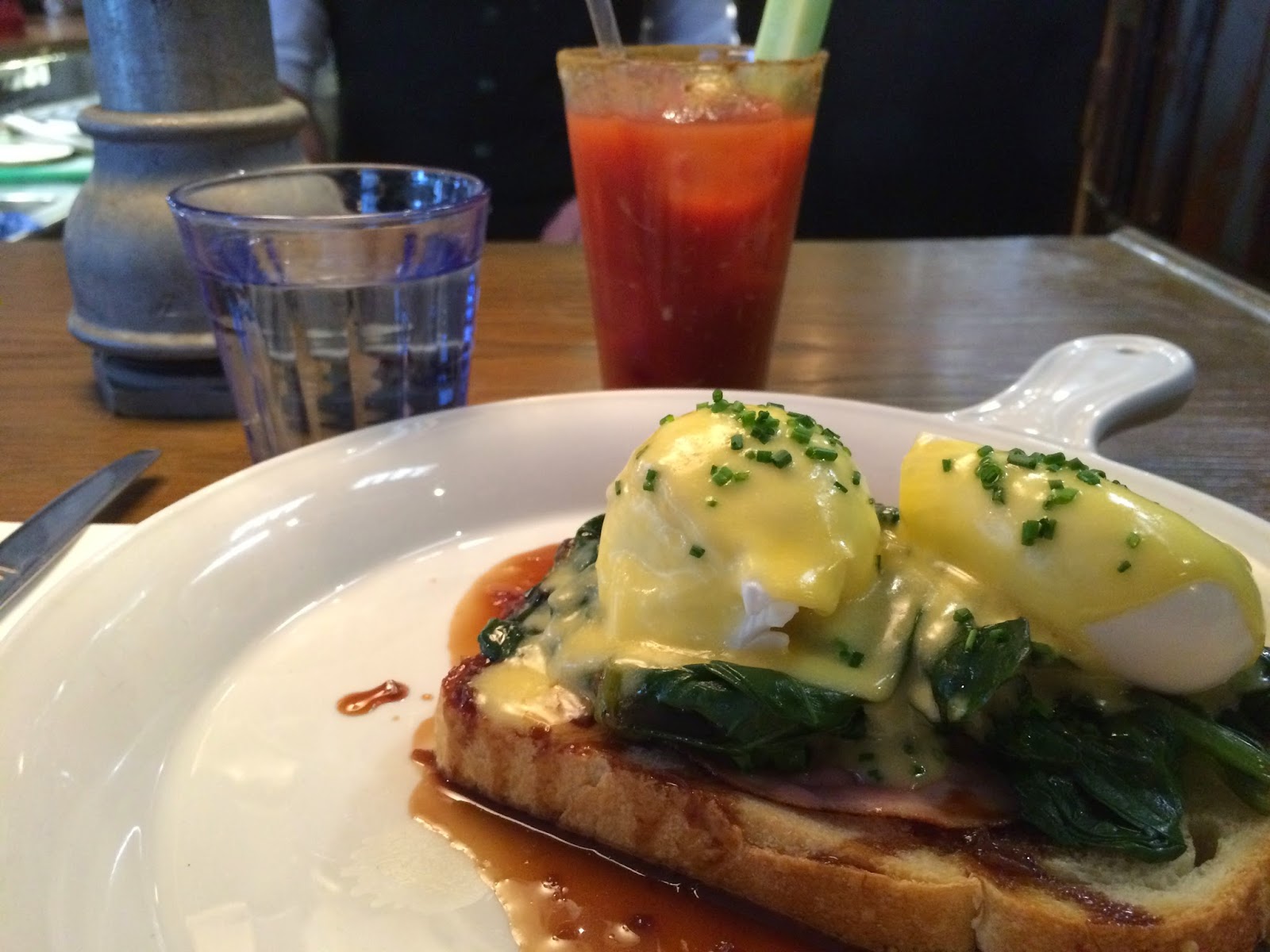 Yea I like it. It's basically an eggs benedict-florentine combo with a thick slice of tomato. The stroke of genius was the bordelaise sauce. The red wine sauce was a good balance to the rich hollardaise. Would have preferred younger leaves and cooked more thoroughly, but minor issues.