Mission - Not Yet Accomplished 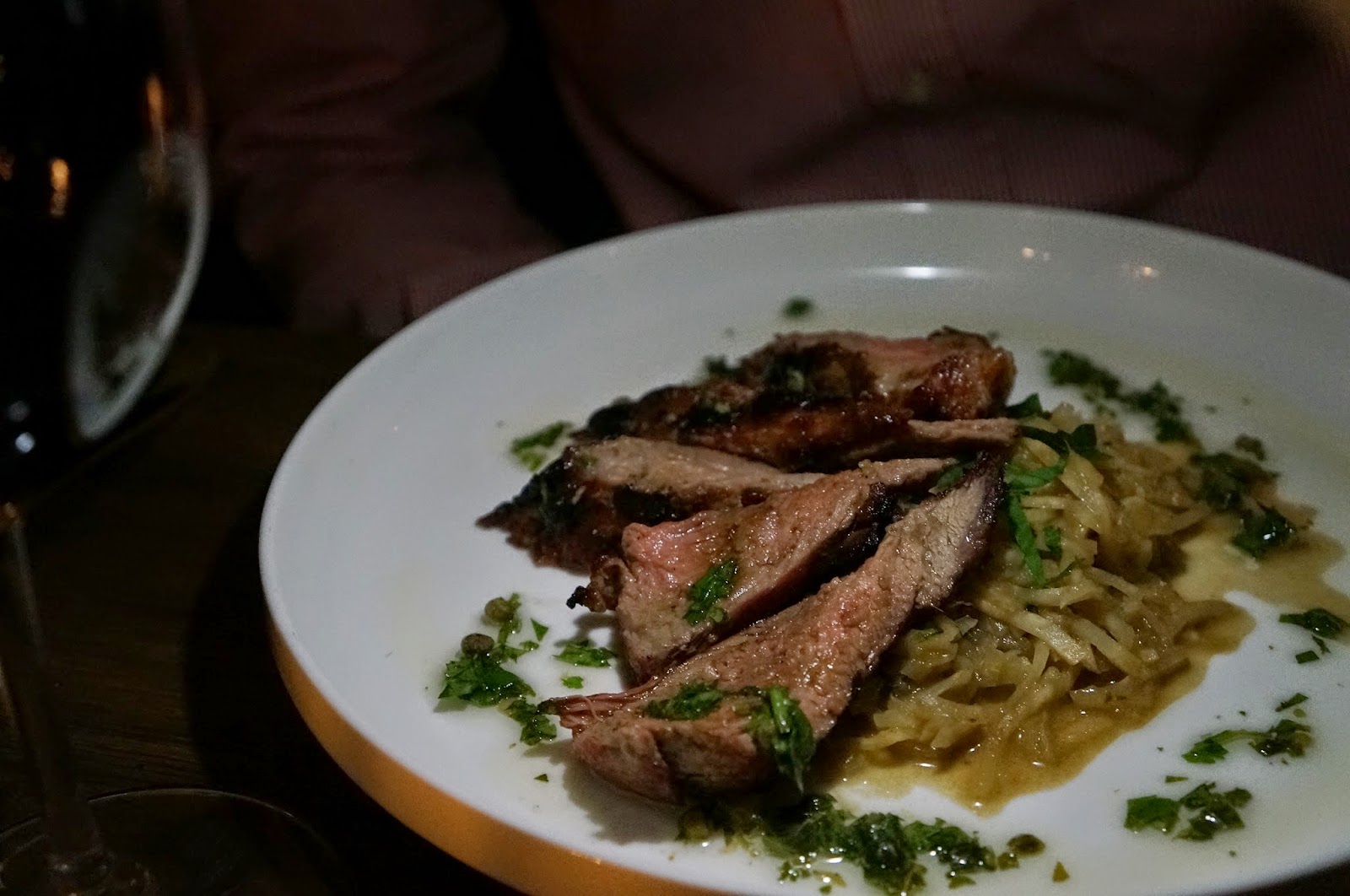 It was a celebratory meal for Shan - the countdown to starting his new job begins. Nothing from our Eat List really shouts but I decided a good wine list should definitely be on the cards. Mission came to mind. Though I never got round to testing the sister Sagar + Wilde wine bar, there was a lot of noise about this opening a few months back.

Mission is located under one of the arches in Bethnal Green; I didn't hear the occasional train rumbling until Shan pointed it out. The dimly lit dining room had a large bar in the middle with a sleek luminous wall of wine bottles. The ambience reminded me of New York restaurants with a slick and chic vibe without trying too hard. The only thing that stood out like the Pink Panther was the palm tree in the middle (?!) Perhaps it was a reference to the Californian wines that Mission specialises. We kicked off the evening with a couple glasses of bubbly, Extra Brut Beaux Hauts 1992 (Russian River Valley), served in wine glasses - it was absolutely delicious; very fine bubbles with the faintest trace of sweetness. 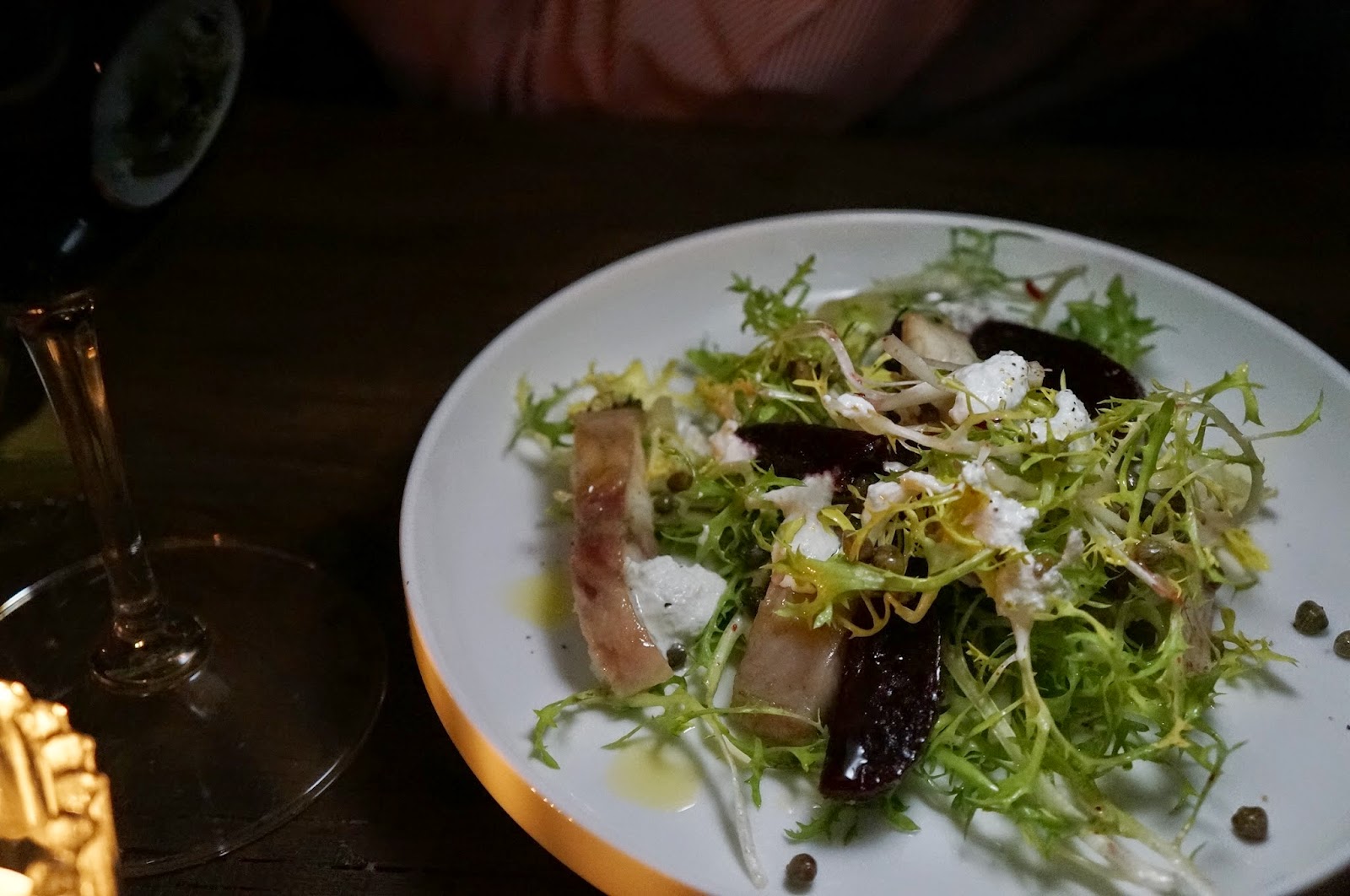 The thin strips of smoked eel were plump with a thin layer of fish oil that gave it the succulence; the balance  between smokiness and fishiness was controlled. The eel worked well with the beetroot wedges, which was subtly sweet without the intruding earthy tones, finished with dashes of mild horseradish cream. It was a simple ensemble of interesting flavours. 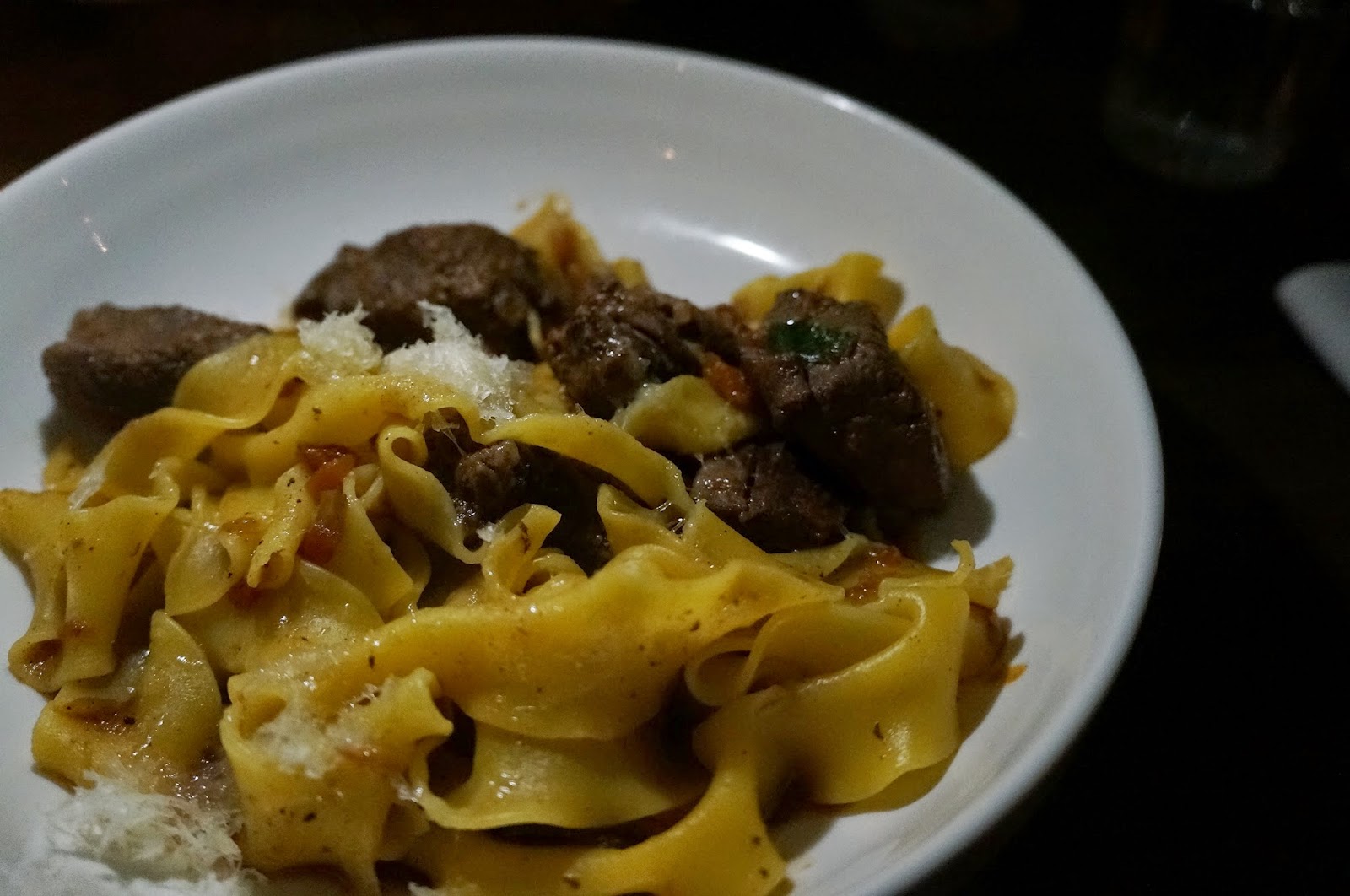 Nothing really jumped at me from the starters, and Shan beat me to the smoked eel. Our server recommended a couple of options that didn’t appeal... I settled for this in the end. And frankly it was quite disappointing.

The large chunks of venison could have been any meat. It was tender, but also dry, coarse and tasteless. It lacked the strong gamey flavours I was hoping for, and there was very little sauce for the fibrous meats to soak up.  The sparing sauce on the plate was flimsy and could barely cling onto the wide sheets of pasta, not to mention the meek flavours. On a positive note, the pasta was well made, though I would prefer it to be more eggy.

Shan (quite rightly) pointed out that I rarely write about the wine. Well I must confess I don't feel confident enough to describe the notes. That said seeing Mission focuses on Californian wines, I'll share what we tried. I had the Pinot Noir "Sager + Wilde" by Domaine de la Cote 2012 (Sta Rita Hills) which was lighter than a typical Italian Pinot Noir; Shan opted for the Petite Syrah Freemark Abbey 2011 (Napa Valley) - he gave his nod of approval but apparently no match to the Mendoza wines from his travels.

There wasn't anything particularly exciting about either of our mains, both in terms of presentation and recipes. Shan's lamb neck was pretty much cooked through, leaving a slightly grainy texture but still tender, I prefer a smoother mouthfeel. The addition of anchovy was too subdued to bring much to the dish. There was nothing wrong, just felt somewhat heartless and disinterested. 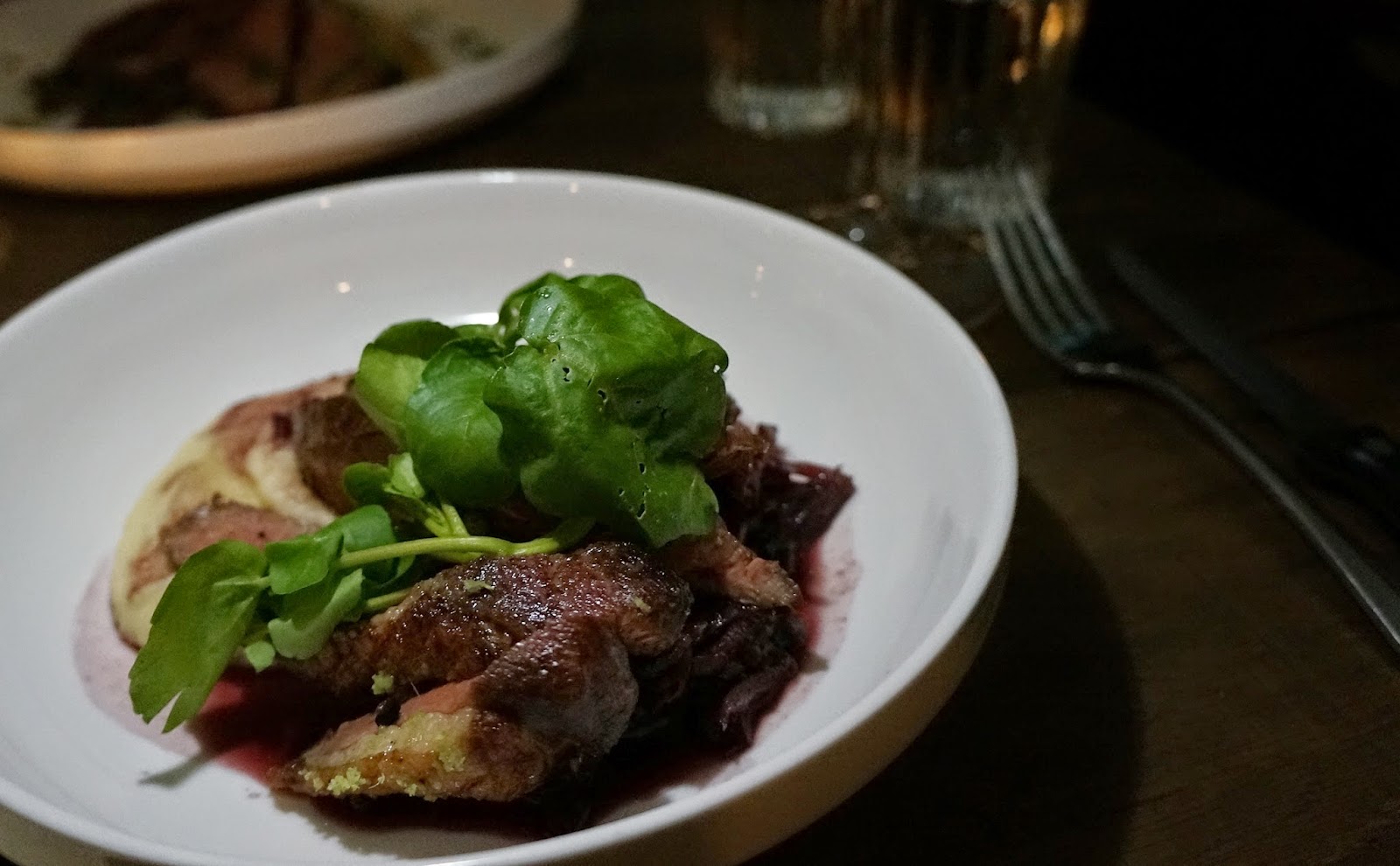 Marginally better with the duck, which was also more cooked through than my usual medium, but the meat was soft and juicy with a healthy layer of fragrant duck fat under the crispy skin. While the red cabbage was unsurprising, the parsnip mash was very enjoyable and added the sweetness to the duck. Again, just not very exciting.

For our mains I randomly picked out Carignan Broc Cellars 2012 (Alexander Valley) for Shan, and I, Cabernet Sauvignon Thelema 2006 (Stellenbosch). Both quite light compared to the usual Old World wines. 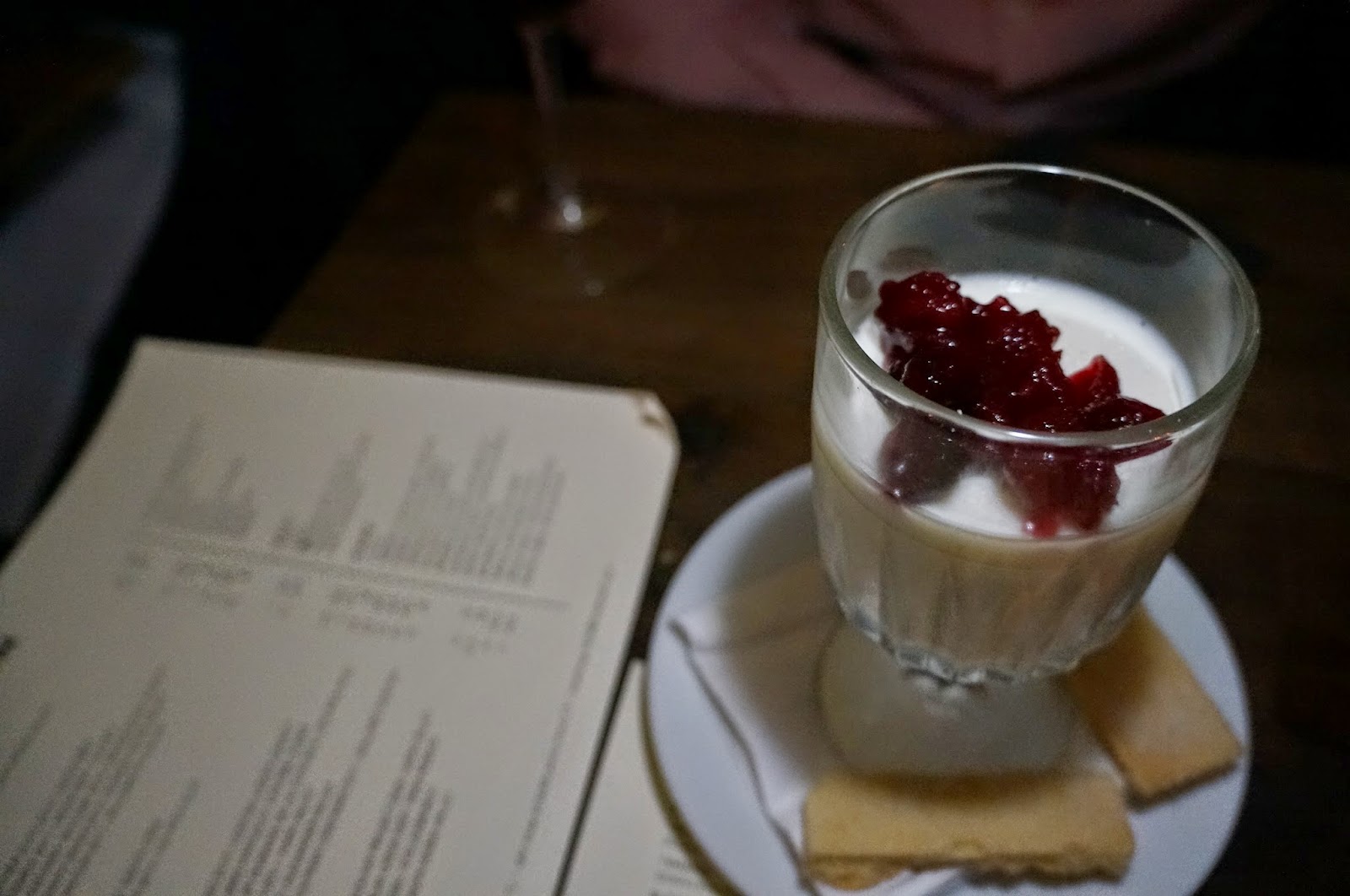 And this was truly awful. The cranberries were eye-wincingly sour and that kind of spilled over to the milk pudding, which carried an unpleasant bitterness. We didn't like it. The shortbread was delicious though, buttery and crumbly.

We left Mission feeling underwhelmed by the food, but appreciated the wines and had a fantastic evening. Like I said there was nothing terrible, with the exception of our dessert, I just expected something less plain and ordinary. We still had a great time - as we always do - the ambience and wines definitely helped. For a wine restaurant, I would say Antidote and Terroirs are in a much higher league. We wouldn't mind checking out Sagar + Wilde later on though.