The Gilbert Scott - A Charming Gentlemen 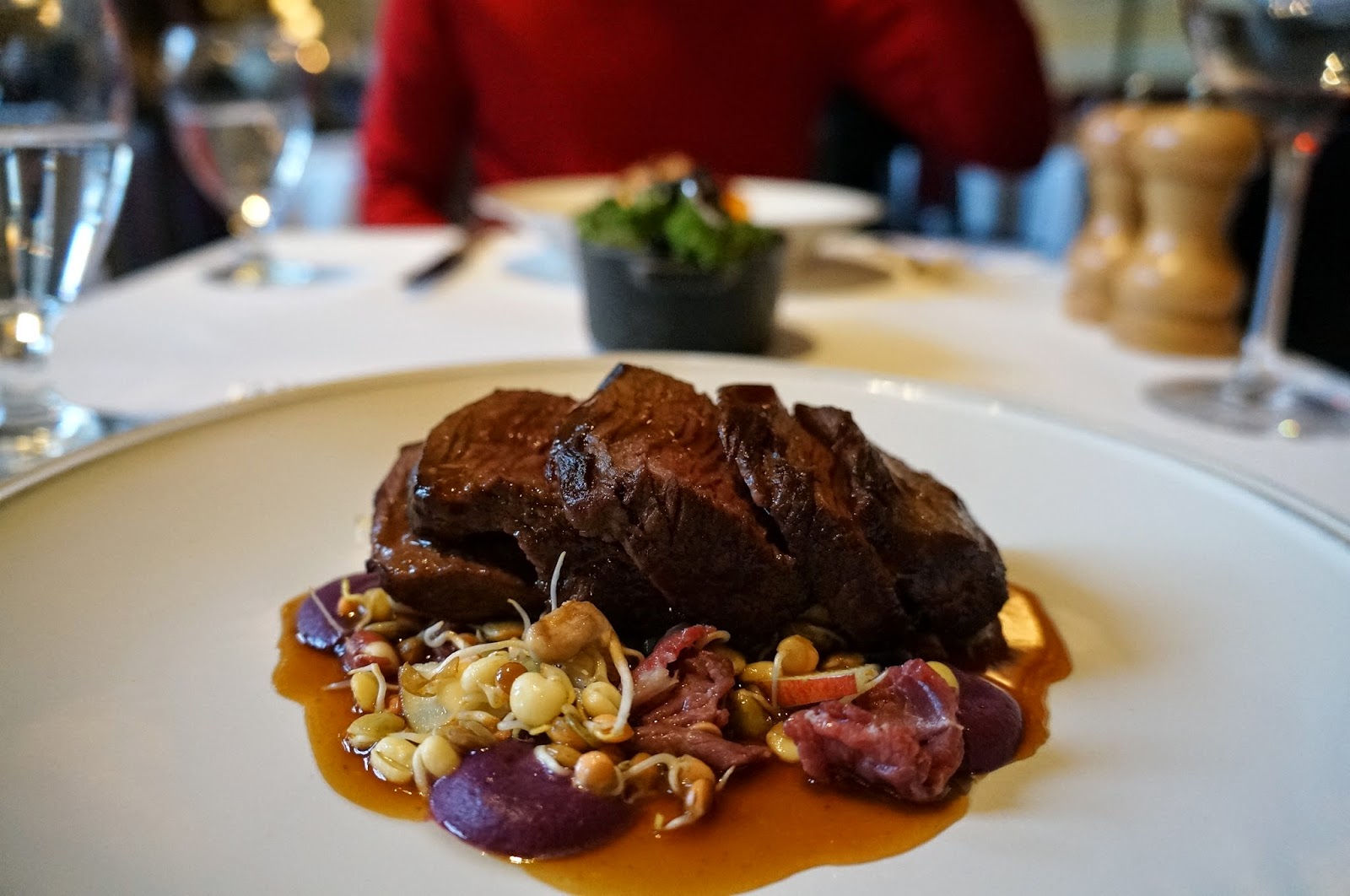 It started off with a suggestion of casual lunch at Dapur or Rex & Mariano on Christmas Eve, which all turned out to be closed. Then we both went on a frantic search for worthwhile restaurants serving lunch on the day... Shan came up with Spring, The Colony Grill, The Ivy and Sketch; I came up with York & Albany, Social Eating House and Hubbarb & Bell. Then he gave me the reins to book and I went with The Gilbert Scott. No particular reason – maybe it’s an unlikely option under normal circumstances.

Named after the Victorian architect George Gilbert Scott, the dining room was quite impressive. The high ceiling and with brass rails and plush sofas booths oozes elegance, but it’s grandeur without imposing formality; the ambience was generally relaxed and warm. After our server came to check on us 3 times, we were finally ready to order and started with a carafe of house red, which was light and mildly fruity. 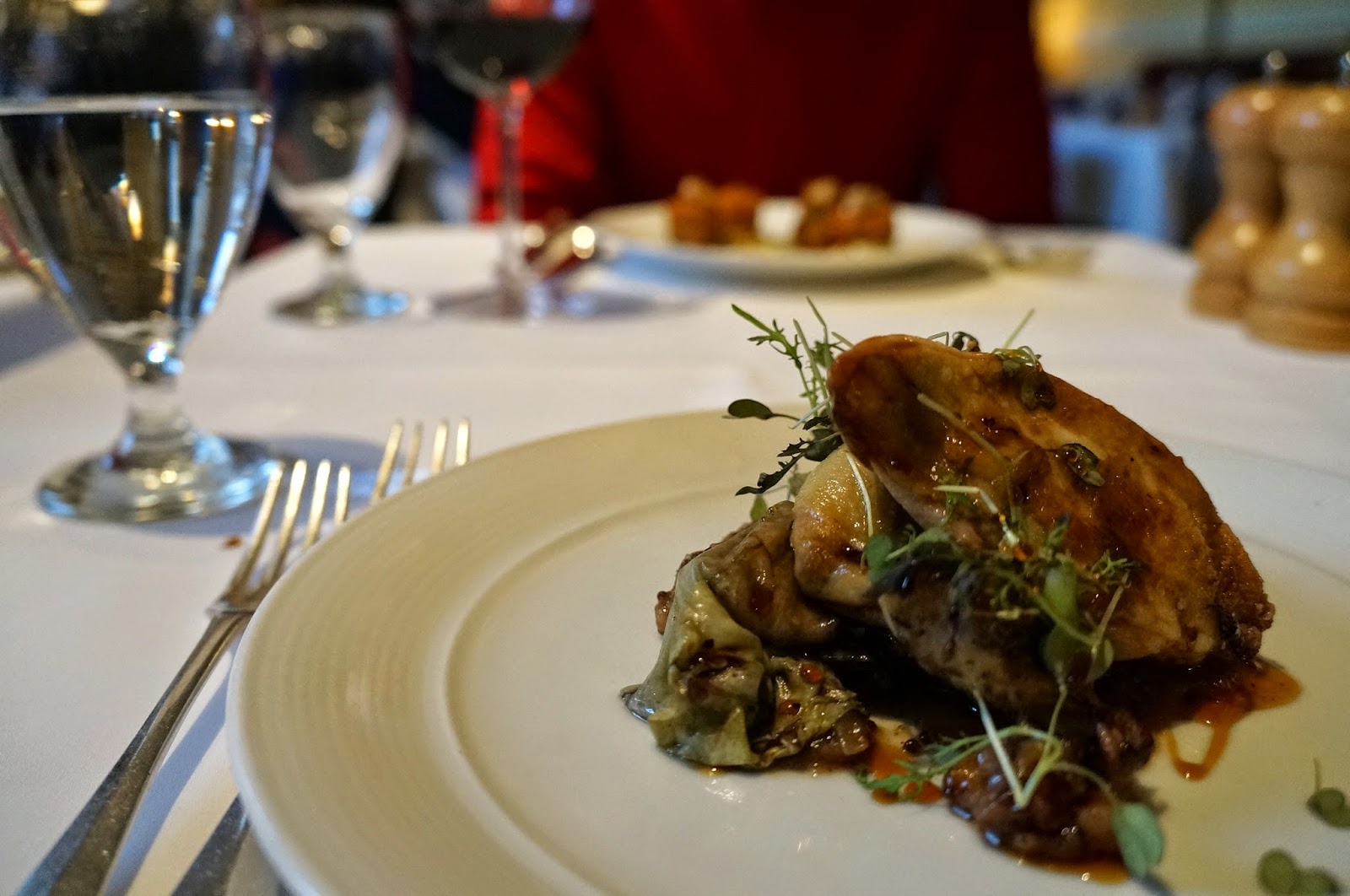 The partridge leg was very well cooked, soft and succulent muscles with slightly charred skin that was thinly glazed with sweetness. What stole the show was the lettuce (!); the crunchy leaves were grilled before braised in a sweet and savoury jam, so it carried strong smoky aroma that went well with the jammy sauce. It was a balanced and carefully executed dish. 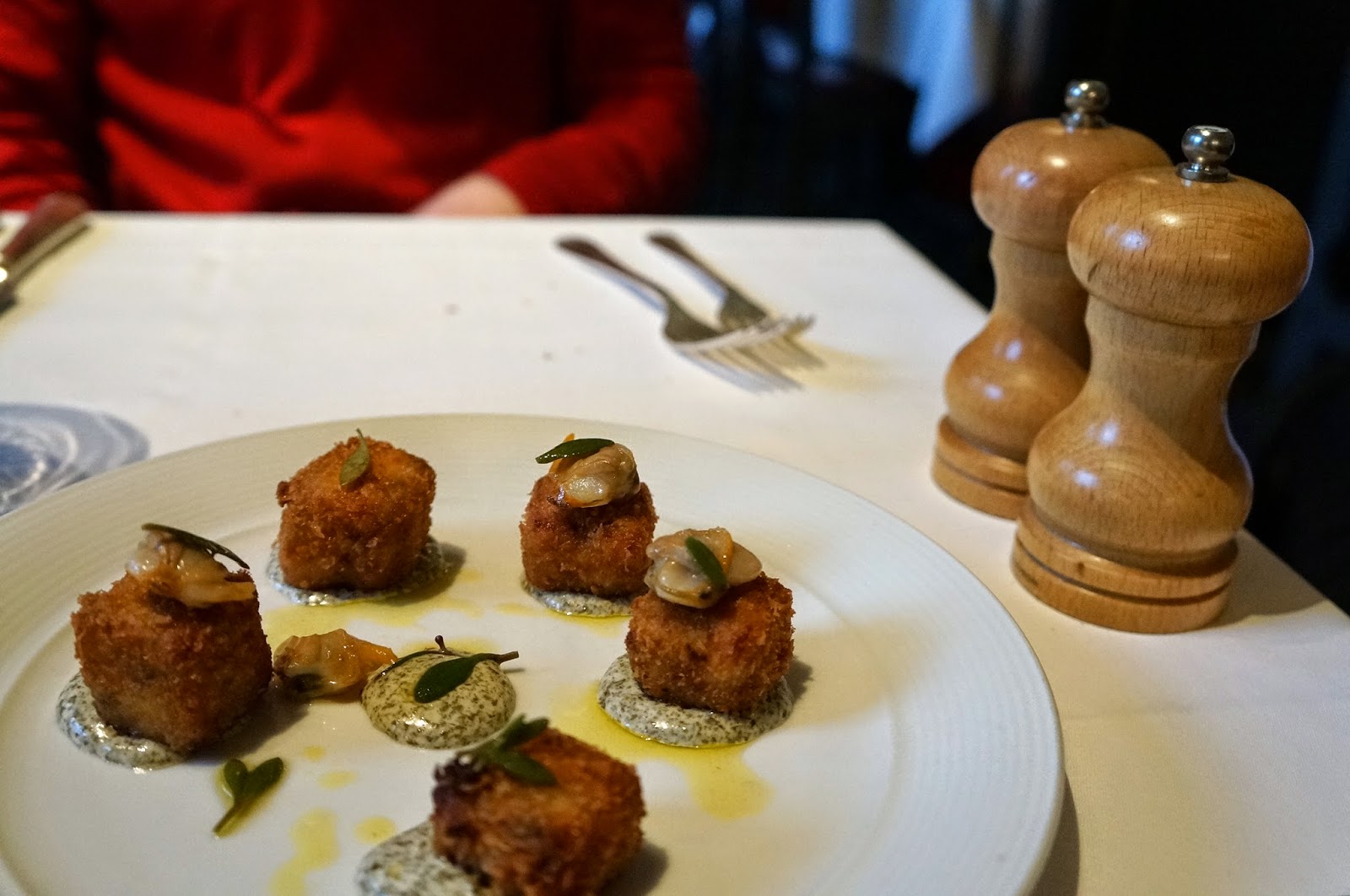 The pig’s head was much less substantial. The small cube packs in shreds of soft meats laced with gelatinous tendons and cartilage, enveloped by a crispy breaded case. The pickled cockles was a nice British touch but didn’t really add much to the dish. I think all pigs head dishes are more or less the same, it’s hard to come up with anything extraordinary. This was good.

I wanted meat; I had been craving for a good hunk of red meat for weeks. The venison arrived overcooked; I asked for medium rare and this has gone beyond medium. I could have sent it back, but unless it was inedible I generally prefer not to – it disrupts the pace of the meal. And honestly it wasn’t criminally overdone, the centre was still fairly pink and very soft. Not as gamey and bloody as I’d usually have it, but it was still enjoyable; the subtle addition of apple worked well with the conventional pairing of red cabbage and venison. What I loved was the pastrami shavings, its distinctive taste was bordering on overpowering the finer venison, yet in moderation it gave the ensemble an edge. 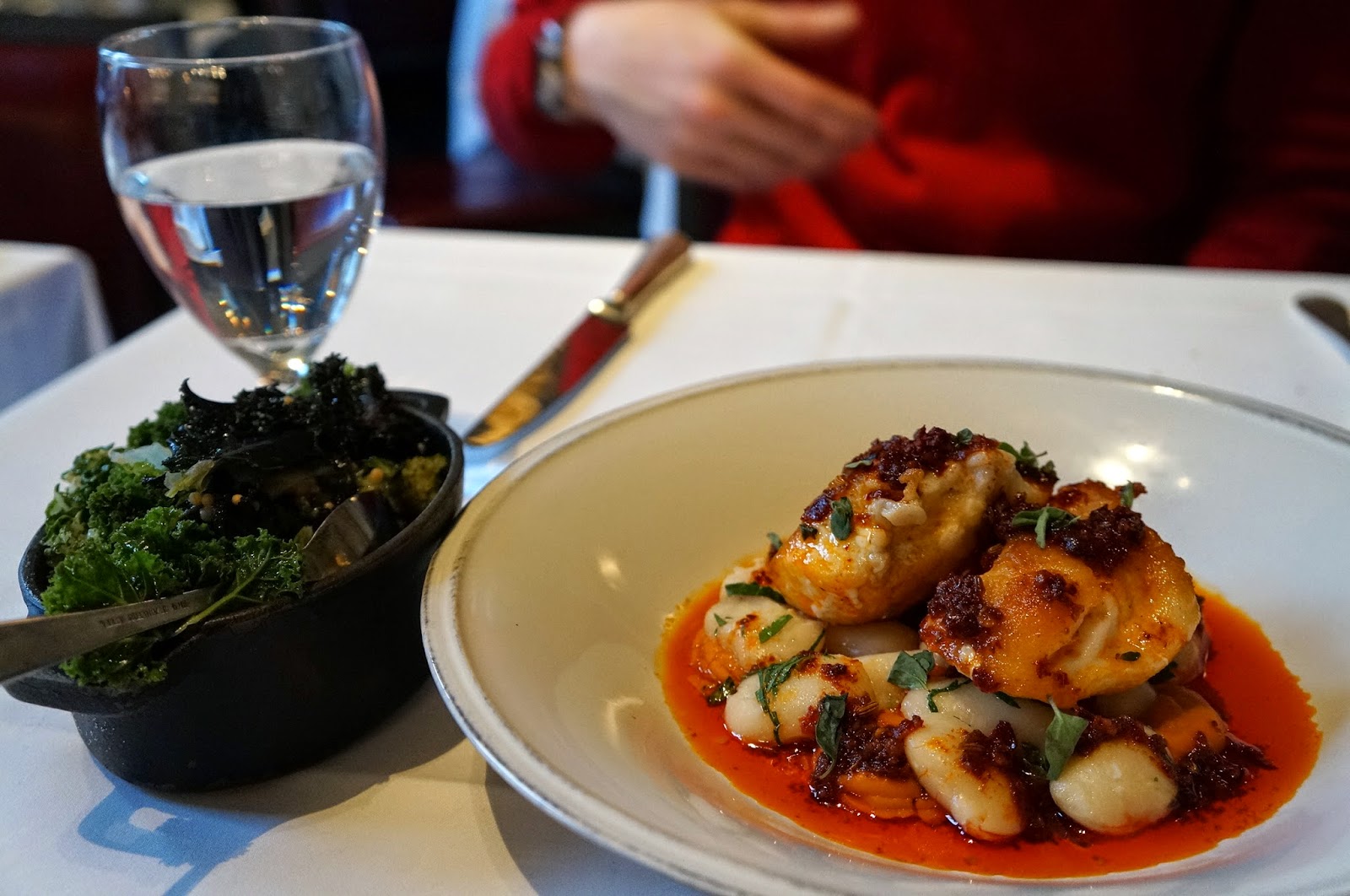 The monkfish seemed fluorescent. It was carefully cooked to retain its succulence and softness, firm in structure but silky in texture. I think monkfish is slowly growing on me, had one at Tom’s Kitchen in the wharf the day before for lunch and really enjoyed it; sturdier than cod and slithery when cooked well. The njuja sausage contributed some kick with its glowing chilli oil, though not too overwhelming. Still don’t like beans, any beans. 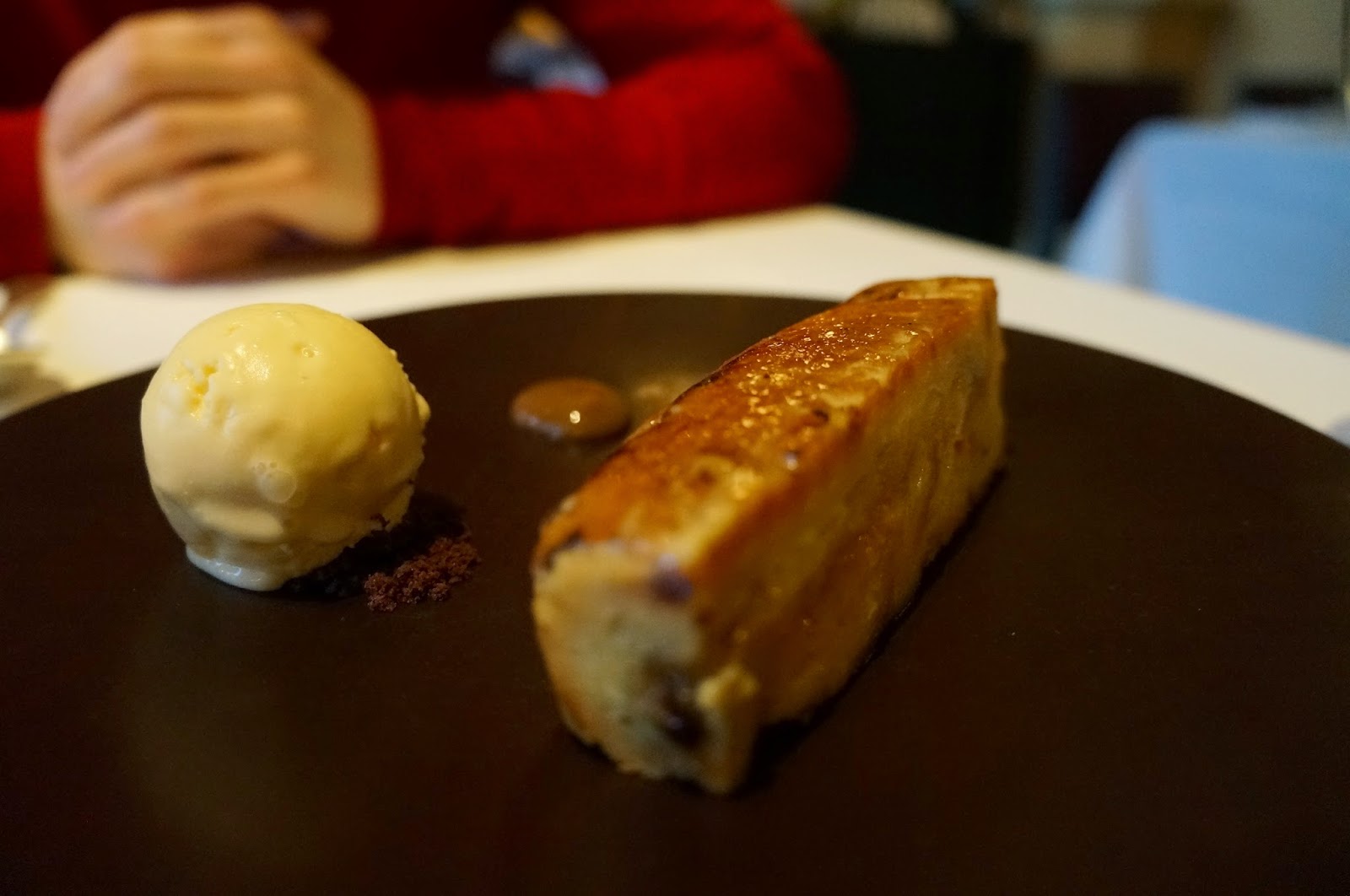 This is my very first bread and butter pudding; I don’t eat raisins or sultanas. Given I forced Shan to pick a dessert for sharing, I wasn’t going to protest. The squidgy pudding was interesting, not dissimilar to a flan, and thankfully only a handful of raisins. As for the rum ice cream and raisin puree, I just don’t think those are flavours I enjoy. Interestingly, Shan got the two flavours pretty jumbled up too.... 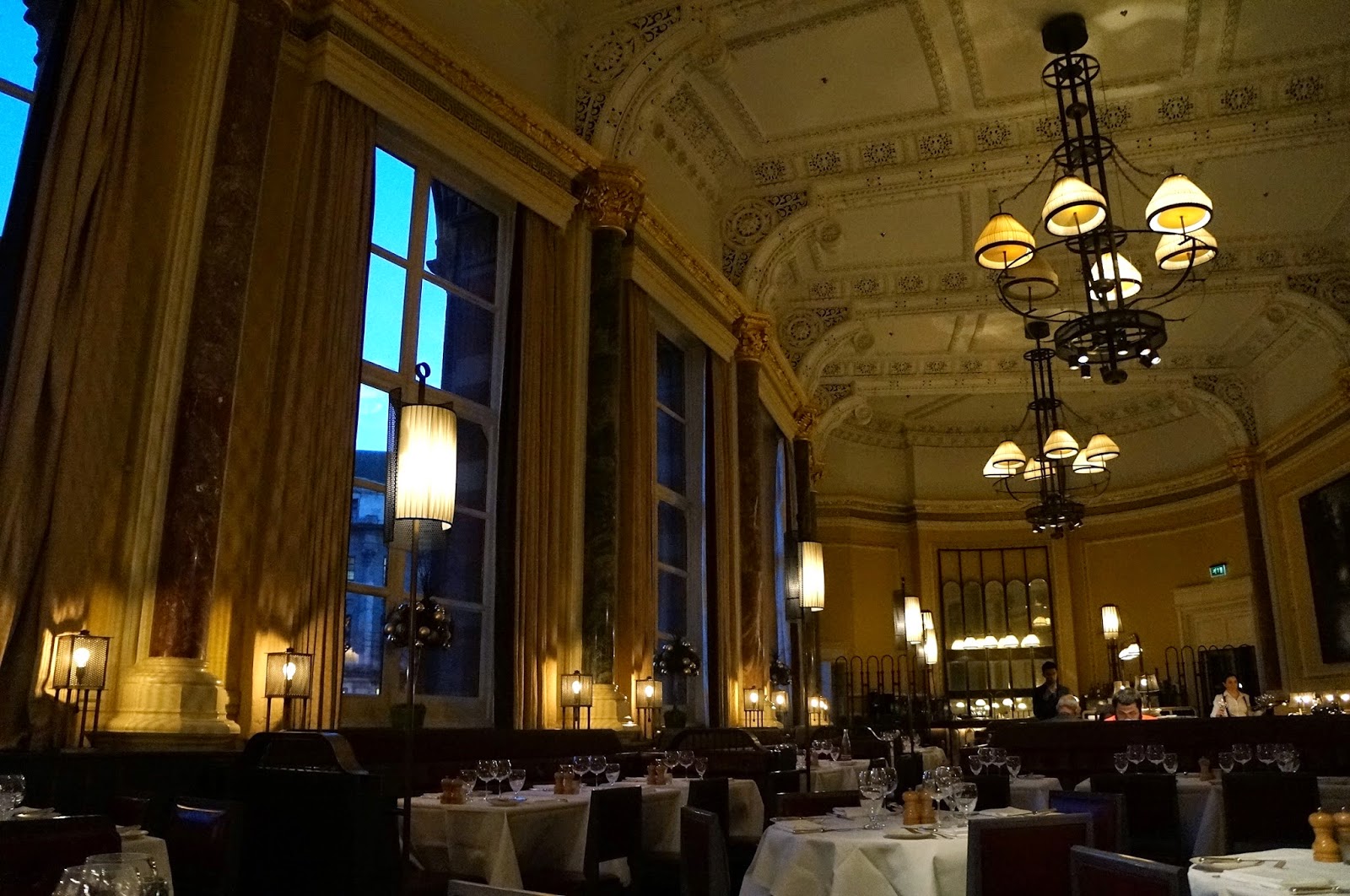 The sky was almost dark by the time we asked for the bill, and the ambience in dining room gradually transformed to something more mature, elegant and romantic with the mellow lights. Although none of the dishes were dazzlingly outstanding at The Gilbert Scott, it was one of the most enjoyable lunches in my recent memory.  On one hand it felt very British – safe, pleasant and subdued; on the other there was a touch of Français, a touch of je ne sais quoi. Nothing ground-breaking, just well-rehearsed recipes executed very well.  Couldn’t have chosen a better place to spend Christmas Eve afternoon with Shan - I really liked it.

You may also like: Brasserie Chavot, Odette's,Pearl by Jun Tanaka
at 23:34