Maybe a tad unfair to call all of these the un-bloggables. These are more or less reviews I started writing, then decided they are not worth a piece on their own. Mainly because they are quite unremarkable, but here you go if you're thinking of going.


ChottoMatte – Forgettable Encounter
This review had been work-in-progress for 5 months and I simply have no motivation to complete it. A small part of me enjoy slating dishes from time to time, to articulate their failures and hope for improvements. But everything here was so wrong - I can't be arsed 'cause it can't be fixed.

We had a dish from every section of the menu. In summary: Itsu-grade sashimi; tostaditas topped with raw fish should be banned from the city; bland and untorched seared beef sushi; black cod could have been any fish as it lacked the milky texture; Anticucher’a Barbecue pork belly was dry meat coated in thick chilly sauce; paperthin vegetables was a joke (see below) and Quinoa salad was a highlight. 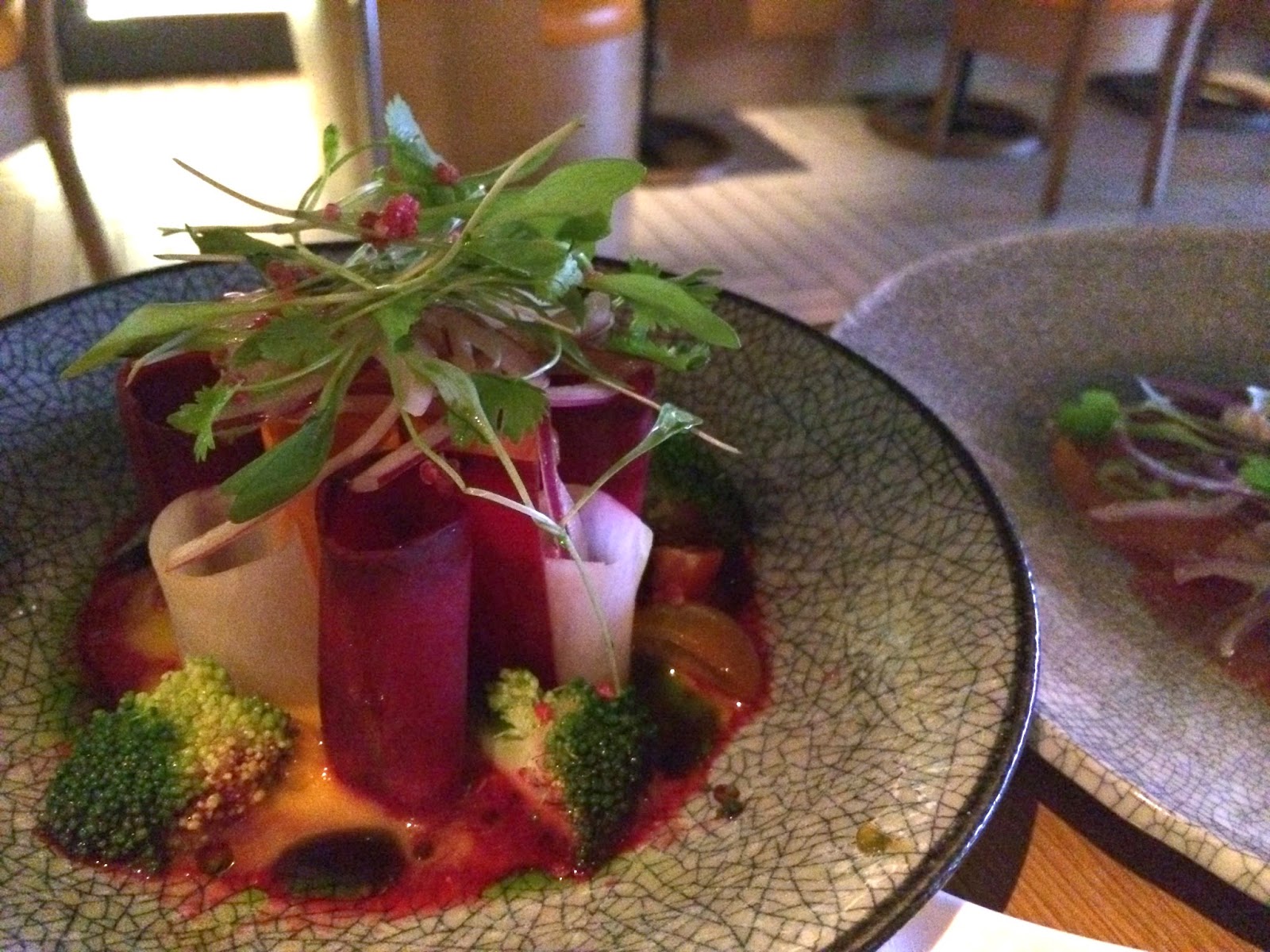 The paper thin vegetable salad was true to its words; literally peels of root vegetables gently pickled for a refreshing, citrusy salad. At £5 a pop, they could have been more generous with the peels. Not that I counted, but it wasn’t particularly difficult to do so, there were approximately 3 paperthin peels of each vegetable and a sprinkle of quinoa. And really? Quarters of broccoli florets? WTF?

United Ramen - A Mixed Bag of Failures
With ramen bars popping up like minions on bananas over the last couple of years, I kind of lost interest after Shoryu (until Kanada-Ya came along). United Ramen was supposed to be different, it has taken the traditional Japanese ramen and injected it with different cultural influences. I was mildly intrigued, but let’s be honest, it was the 50% off soft launch offer that brought us there. 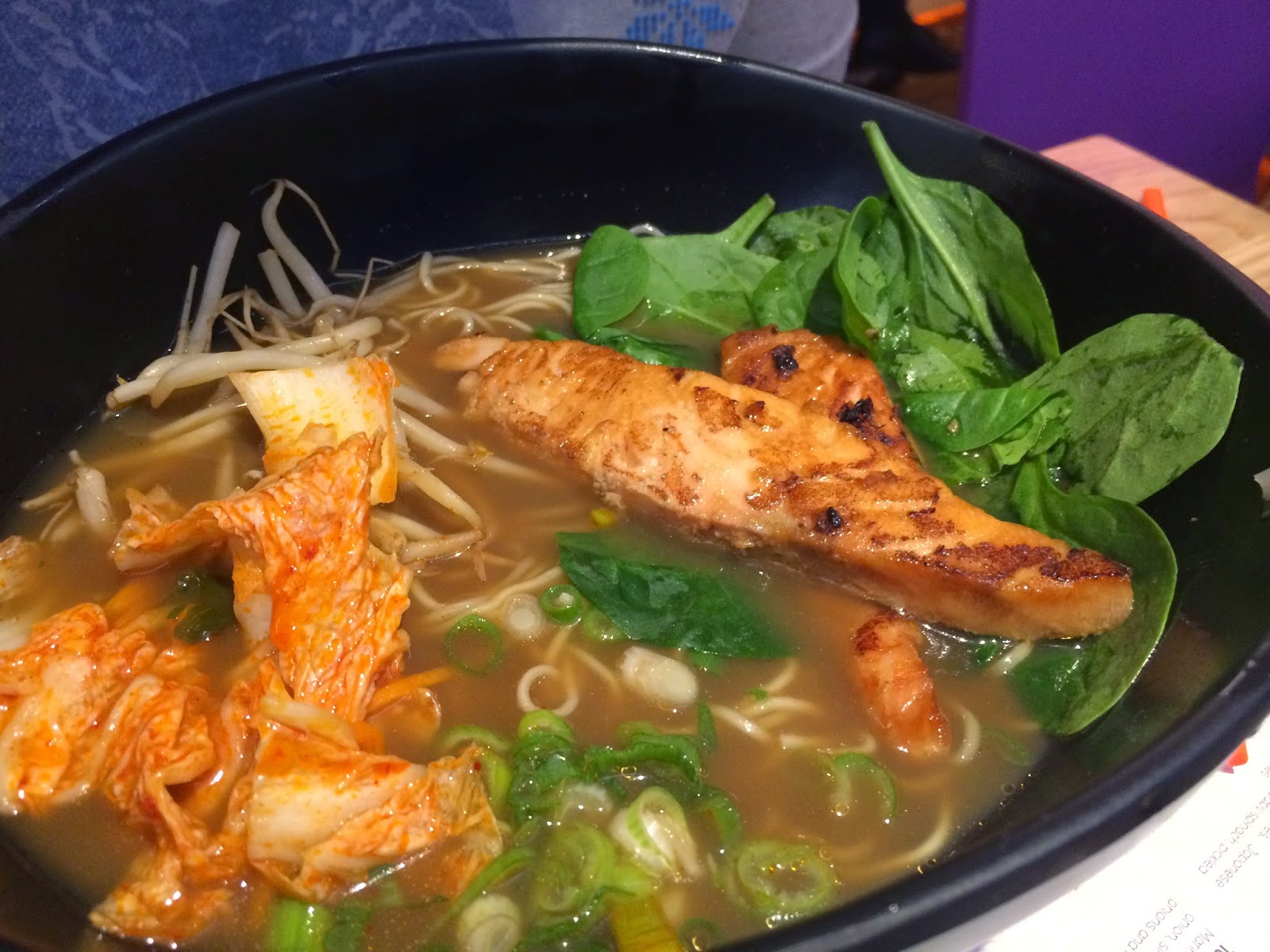 The presentation could not have been worse. The salmon filets were poor, no sign of miso or spice, just bland chucks of overcooked stiffness. The broth lacked depth and roundness, just regular stock with seafood-flavourings – could have tried harder with some iconic Korean sweet spicy sauce. Noodles were alright, just wasted in a weak broth. The kitchen dumping some kimchi in the bowl does not make it a pathetic excuse to call it Korean influence. There was nothing Korean about it. 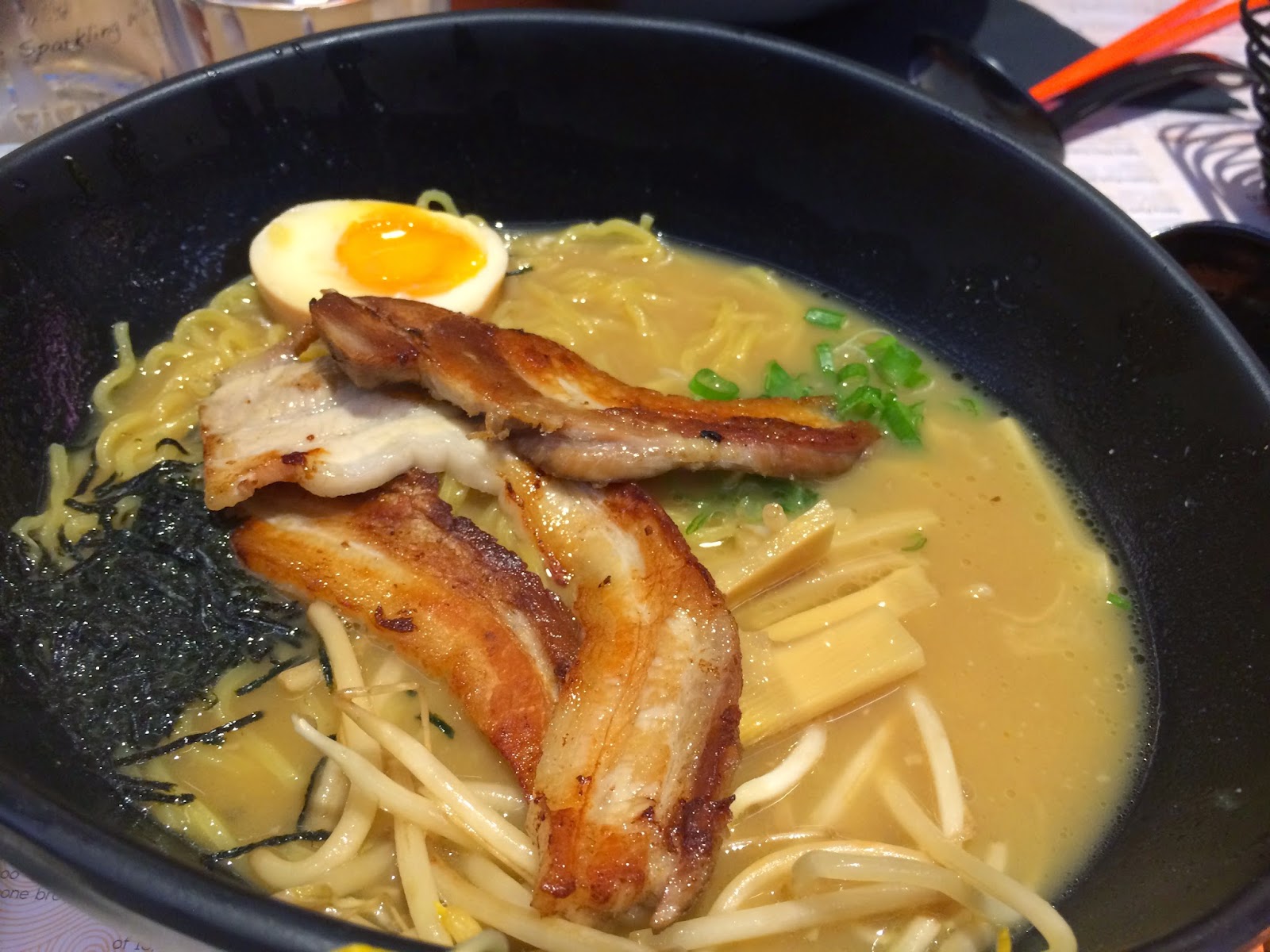 This got me fuming – frankly it’s an insult to Japanese cuisine. This so-called ramen is wrong on so many levels I don’t know where to start.

Firstly, the traditional chashu involves slow-cooking a hunk of rolled pork belly in a low temperature for hours. There is a good reason to roll the pork, which is to retain its juice and moisture when the meat braises in dark soy and mirin. The melt-in-mouth pork should then be chilled before slicing and re-coating in another layer of marinade. Now this is the basic procedure. This pan-fried cut of cheap pork belly is downright laziness – one side was burnt and parched, while the underside was pale. It was gross.

Again the broth lacked depth and the savoury miso fragrance that one would get from prolonged simmering and good quality miso. The noodles weren’t eggy and springy enough; the soft boiled egg lacked flavours from its soy marinade; too much beansprouts and rubbish presentation. Surely I haven’t covered everything, but this was as bad as a ramen could get.

Agedashi Tofu
I pointed out to our server that they shouldn’t even be serving this dish, and should remove it from the menu. I think they did. The tofu was porous and firm, wrapped in a soggy batter that had soaked up the soy sauce dressing. The drenched mess was served cool – unpleasant.

Trio of “Little Moons” Mochi
The highlight of the meal was dessert because they bought them in.

You may also like: On the Bab, Tonkotsu East , Kirazu 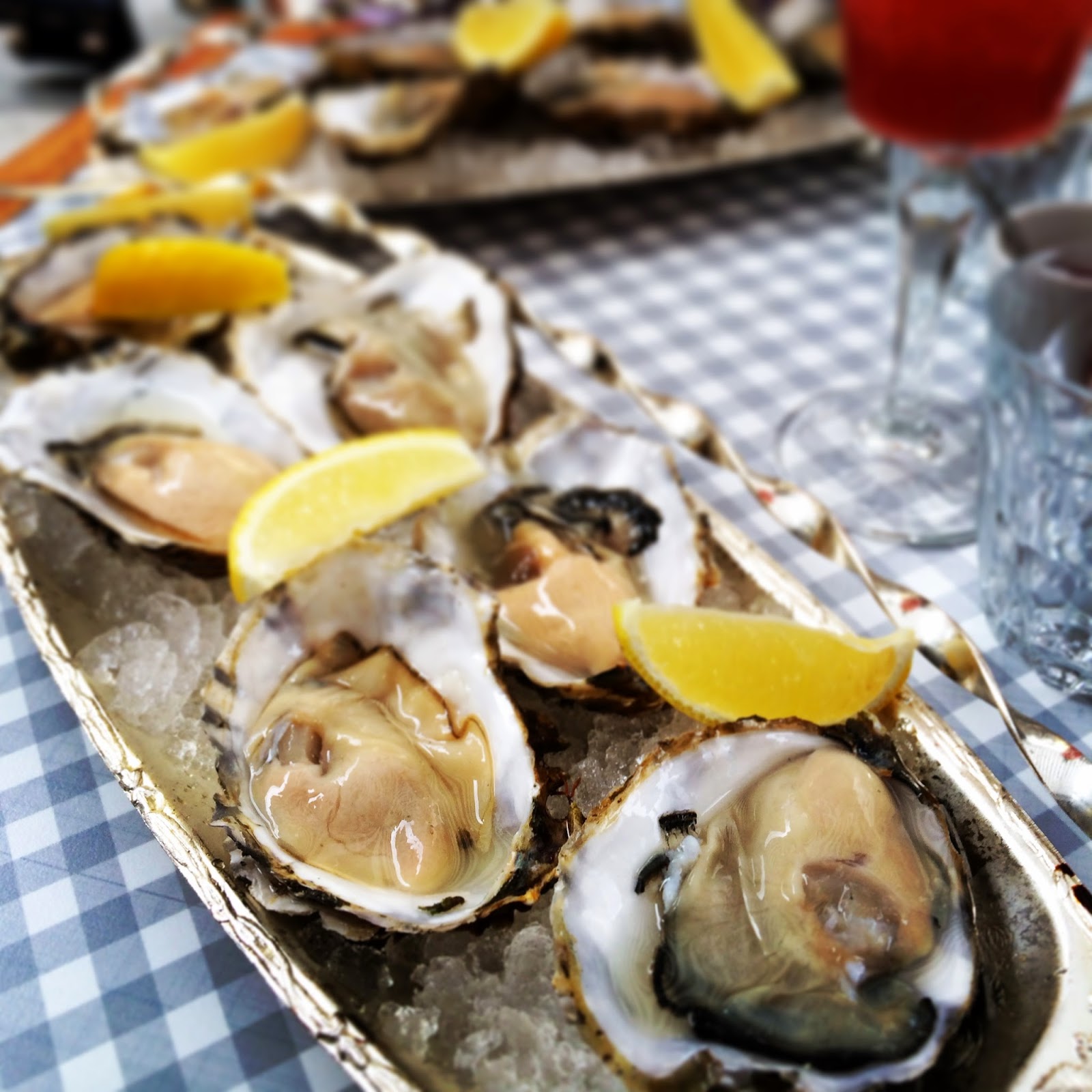 Bonnie Gull was offering £1 oyster happy hour during the week from 4:30-6:30pm - as if I was going to miss out. To my delight the happy hour extended to the cocktails too! My Chaplin’s Crush with apricot brandy was scrumptious.

The oysters on offer were Dorset Blue Rocks; we sensibly started with 6 each and lucky we did. They were huge; round and fatty with a creamy sac of bliss. So so good – possibly the best I have had in years.

Wright Brothers at Spitalfields was offering the same deal with their £1 oysters till 6pm on weekdays. They serve Jersey rocks, which are probably half the size of the Dorset Blues. Things are a lot less exciting here, puny oysters with meagre morsels. Still fresh and shucked-to-order, but you know there are much better ones around.

Cynthia came up with Mussel Men for our girly catch-up with Ceci. It was a scorching hot day, we sat outdoors at the back and popped open some prosecco to wash down the gossips. Prosecco Col Fondo was extremely dry – can’t say I was a fan. 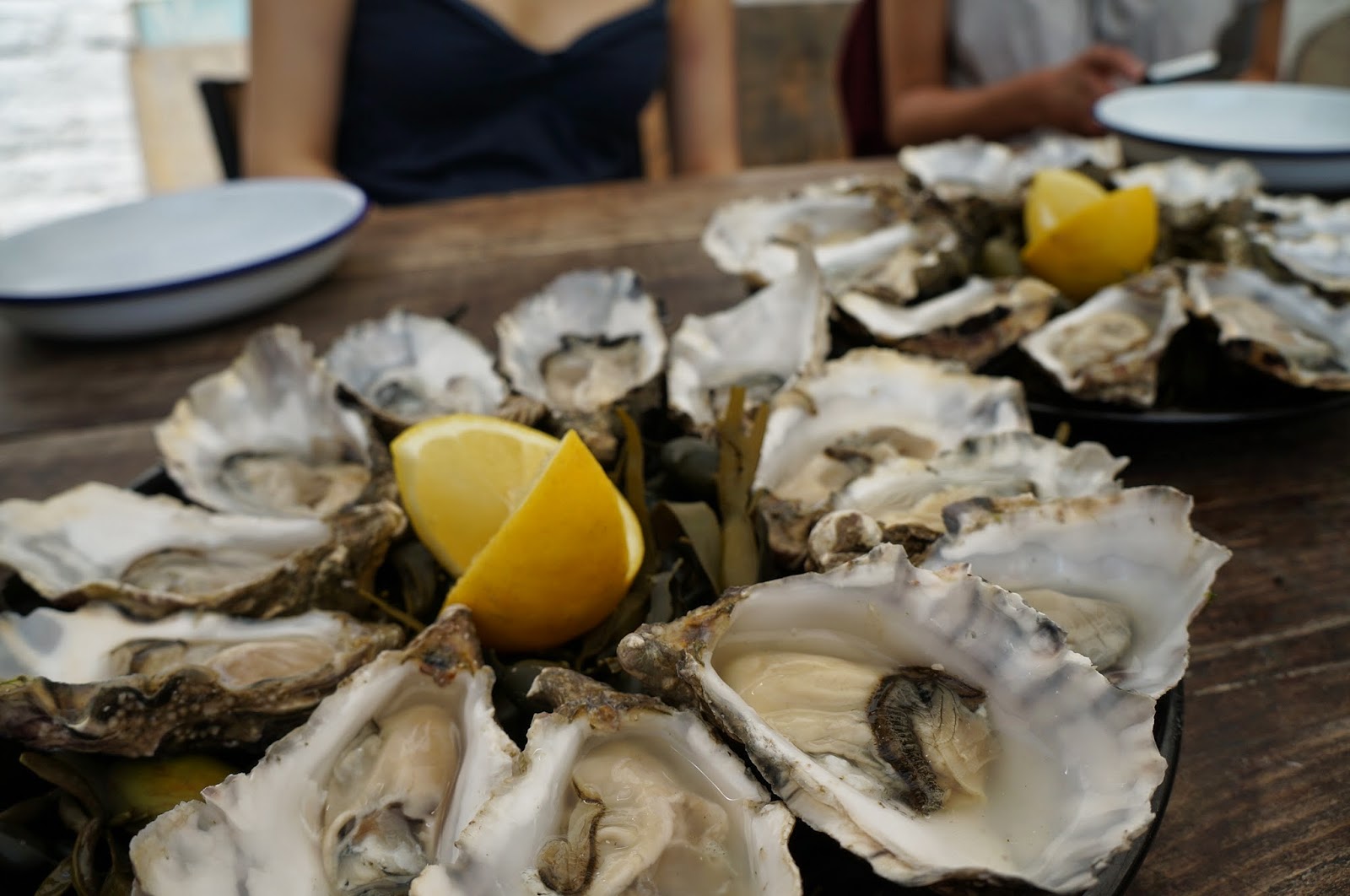 The rock oysters were quite good, not particularly plump but acceptable given they were not in season. Still plenty of umami from the minerals, clean and crisp. Cynthia managed to smash a dozen by herself.

We also had the Soft Shell Crab with carrot salad; very thin batter with a good bit of meat from the crab, paired with a mildly acidic dressing.


We went for two portions of mussels between the 3 of us. The mussels were very muscular indeed, meaty and sweet, and perfectly cooked to retain their succulence.

Well & Bucket - Came Up Empty
I looked at the menu online and has been itching to come here since - oysters plus sliders can't really go wrong.  The Well & Bucket is essentially a trendy pub-bar, a couple of long tables reserved for group bookings and a cute outdoor patio for the sunny days, and of course the sexy 5cc cocktail bar in the basement. 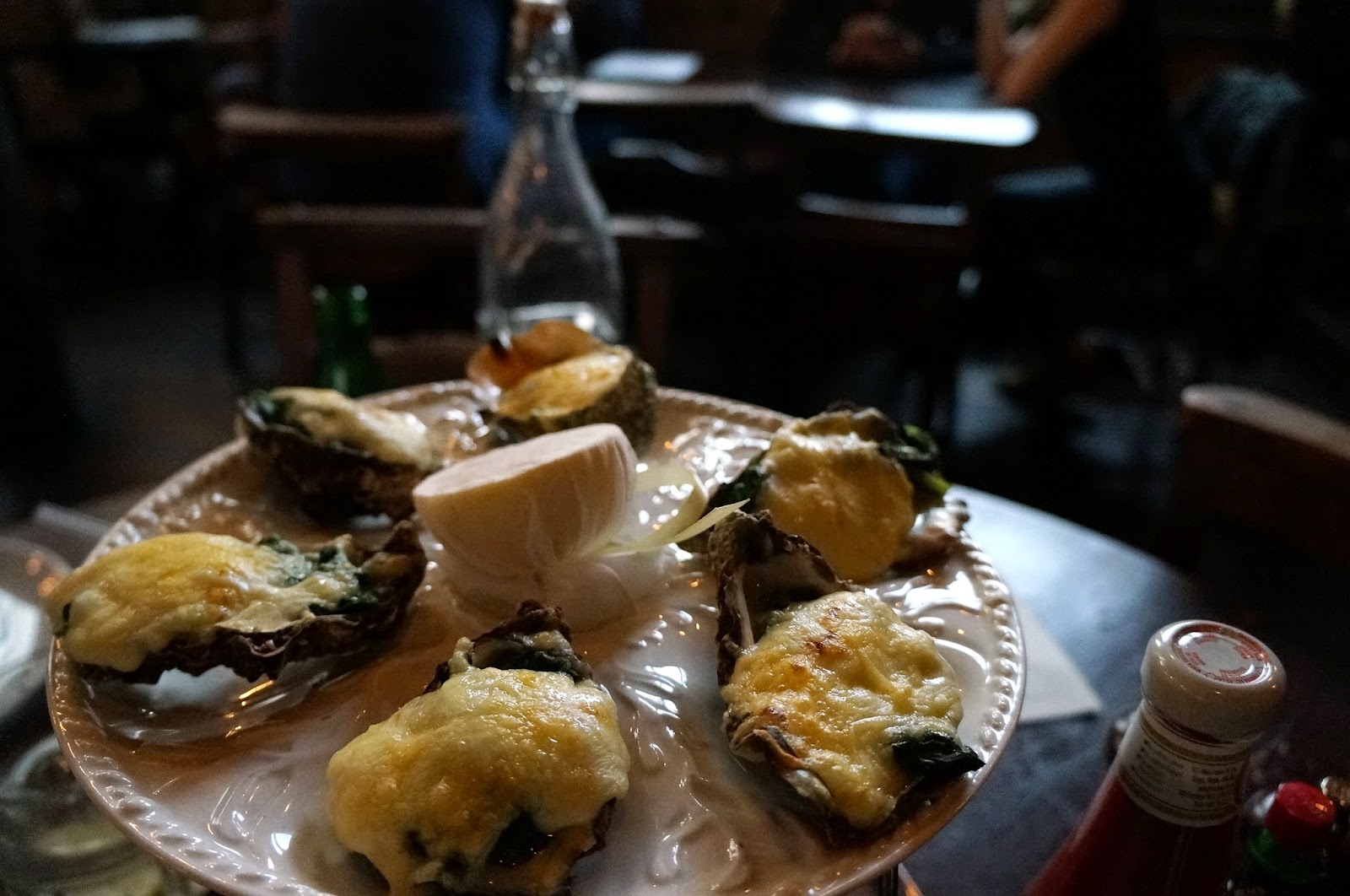 The oysters themselves were lean, made more plump with spinach and fluffy cheese sauce. Flavours were alright, a gentle kick from a couple of drops of Tabasco and a drizzle of absinthe to stimulate the taste buds. 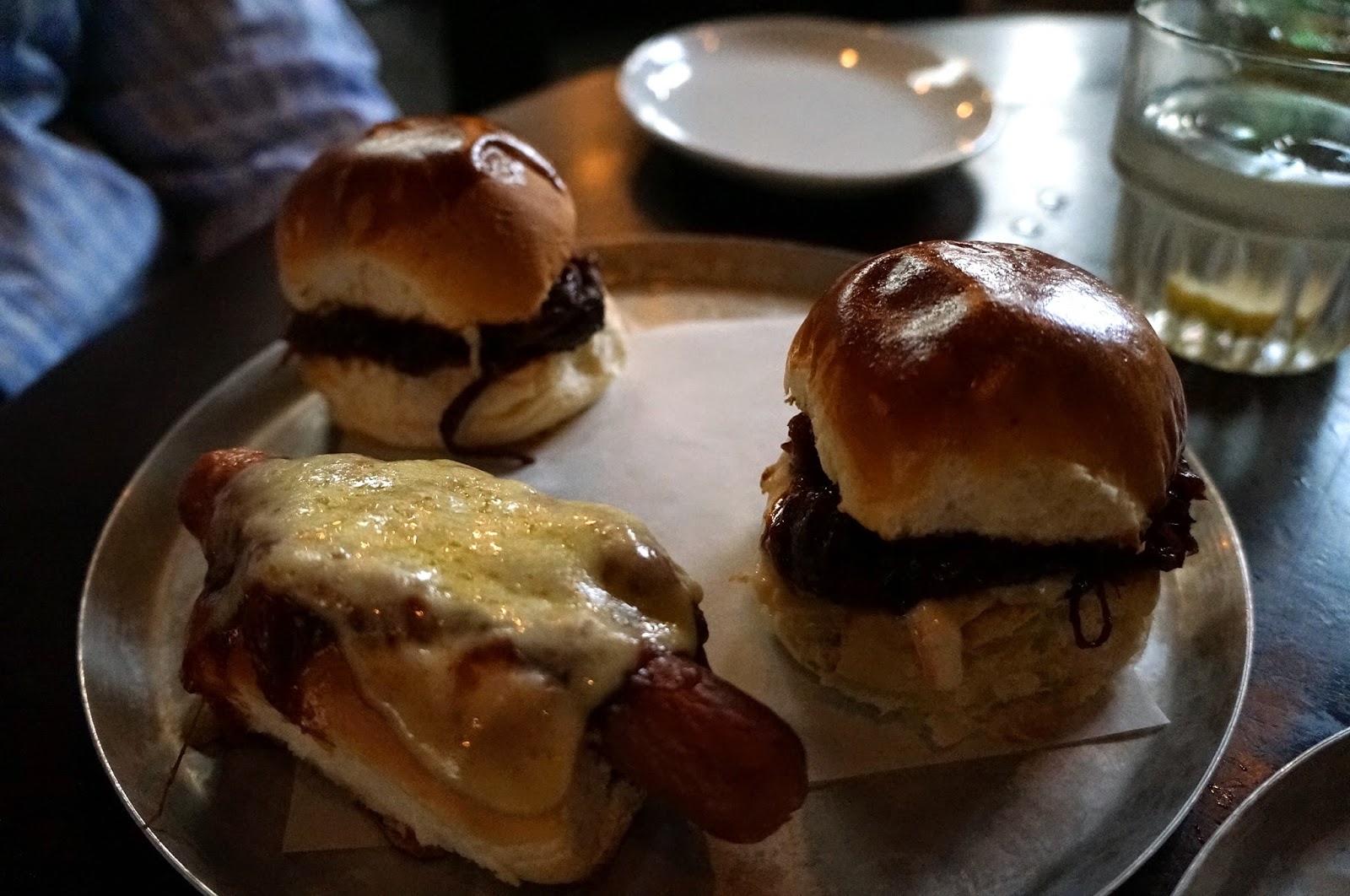 The brisket and pulled pork were quite similar, we only managed to tell the beef from the pork because of the potent heat from the chipotle, and that was some tongue-numbing stuff. The pork shoulder was easier to stomach except the bbq sauce was overpowering and dominated the flavours. The dog from the chilli dog itself was pretty disappointing, almost like sausages from a can plus traces of oxtail. Nothing gourmet or worth writing home about.

Crab fries with cheese and aioli
These were fries topped with shredded crab meat and a few dollops of aioli. It's obviously canned stuff, so it tasted artificial and engineered, but I gotta say, it's one big can of crab meat. The fries went cold very quickly, as one would expect with a mountain of cold crab meat sitting on it.

Not sure if I could come up with an overall verdict for Well & Bucket. If I am honest, I thought the menu looked better on paper; delivery was a tad sloppy.

You may also like: Elliot's Cafe, Lucky Chip, Princess of Shoreditch
at 17:33