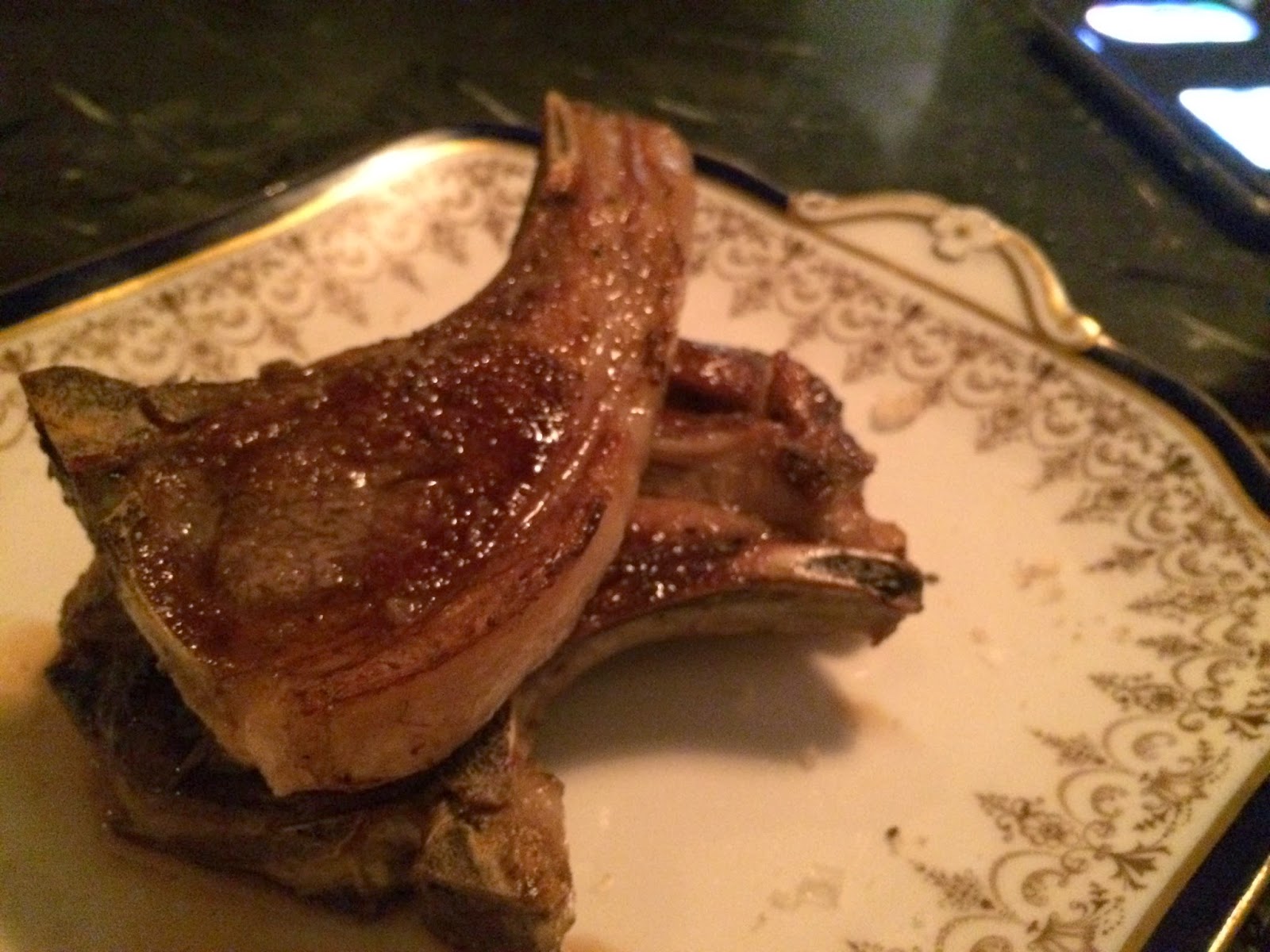 The city was busy with romance on Valentines Day; my first as a singleton since the age of 15. Well, at least I don't have to pretend to like roses. Lucky for me, Flora's better half was out of town so I get her as my date to check out Blacklock's soft launch. 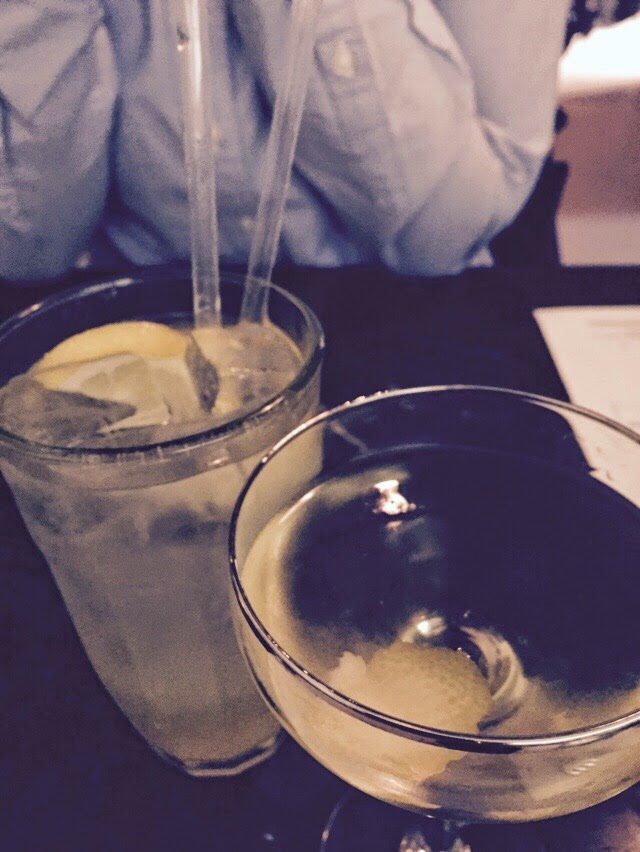 Hidden in the basement on Great Windmill Street, Blacklock was opened by ex-Hawksmoor employees to serve chops. A very simple menu with 3 kinds of chops and an array of sides, all done on the grill. Chops were going for £4 each or a stack of 4 for £12; sides were £3 a pop; there is also the option of going all-in at £20pp. The cocktails were a steal at £5. I had the Nettle Gimlet , sweet and strong, while Flora tried the Grandma's Spiked Lemonade, pleasantly citrusy and easy to drink. 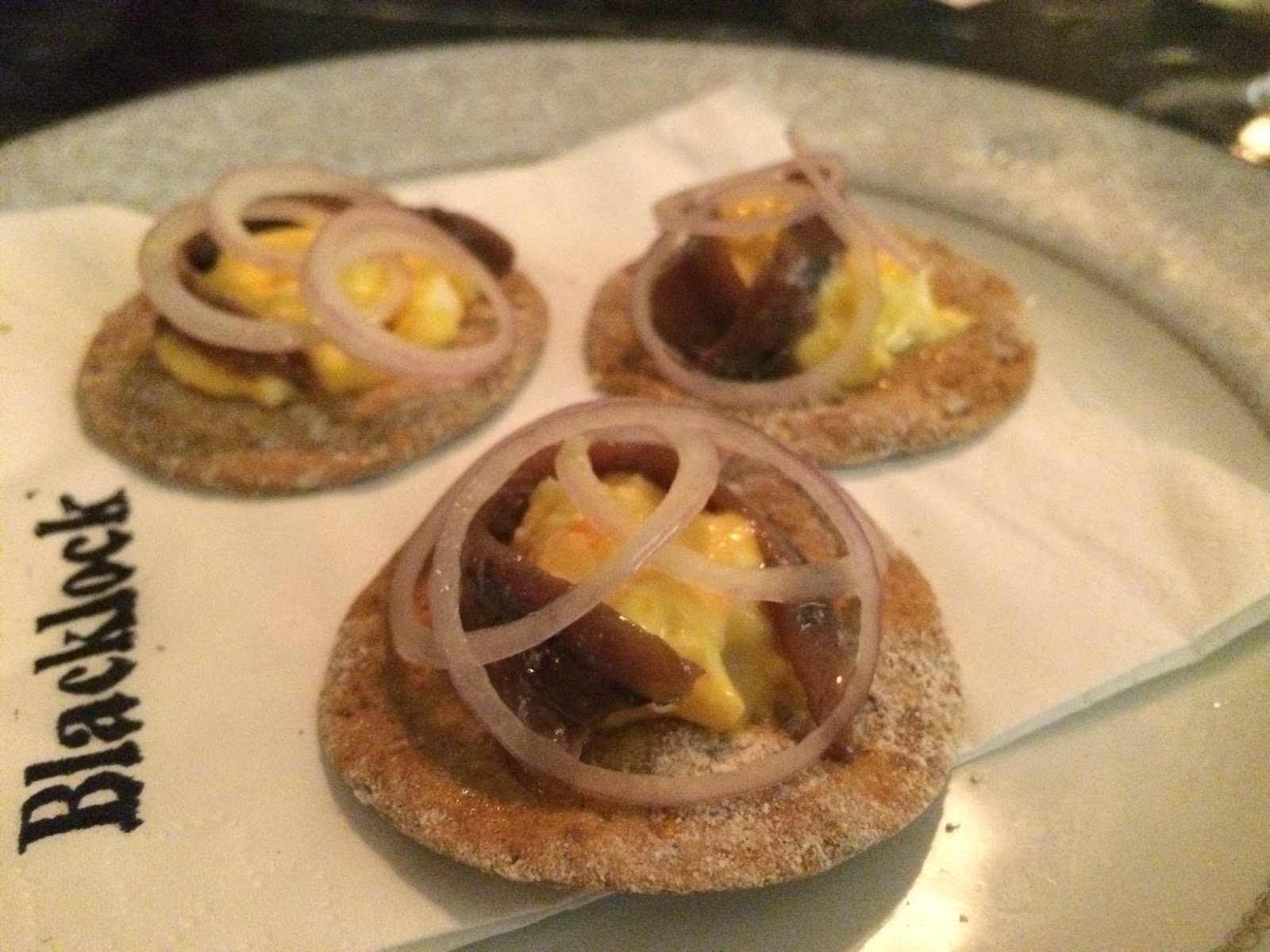 This was no doubt taken from Foxlow. The small pile of soft silky scrambled eggs was neatly circled by a thin strip of anchovy. It was well balanced, the eggs mingled and soften the crispy disc before the punchy anchovy kicked in. We liked it so much we went for another round. 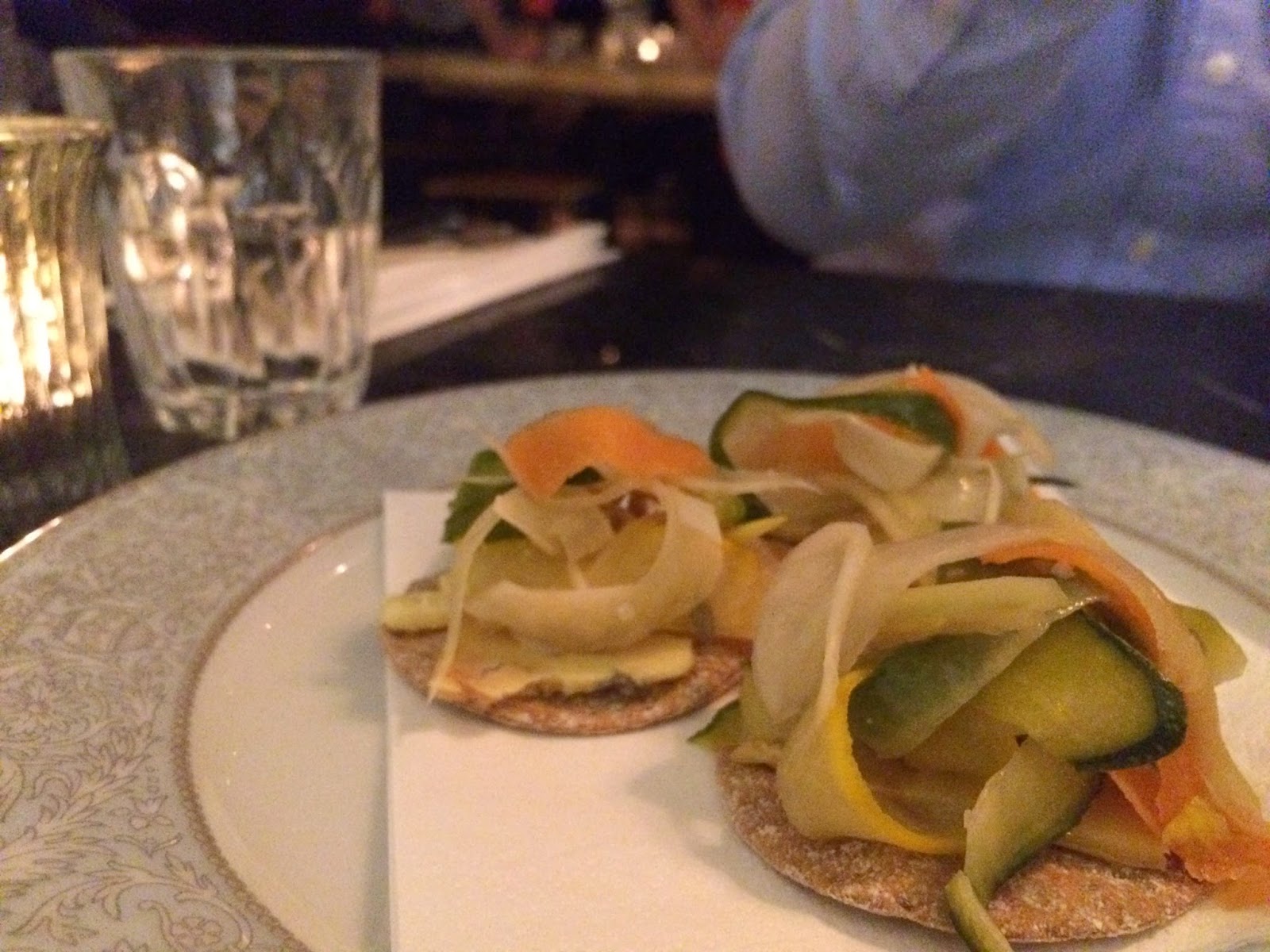 They gave this to us by mistake - we had it anyway. The entire ensemble was completely different to the egg and anchovy. This was predominantly crunchy from the refreshing pickles, which neutralised the thin sheet of stilton hidden under the pile. It was a palate-awakening nibble. 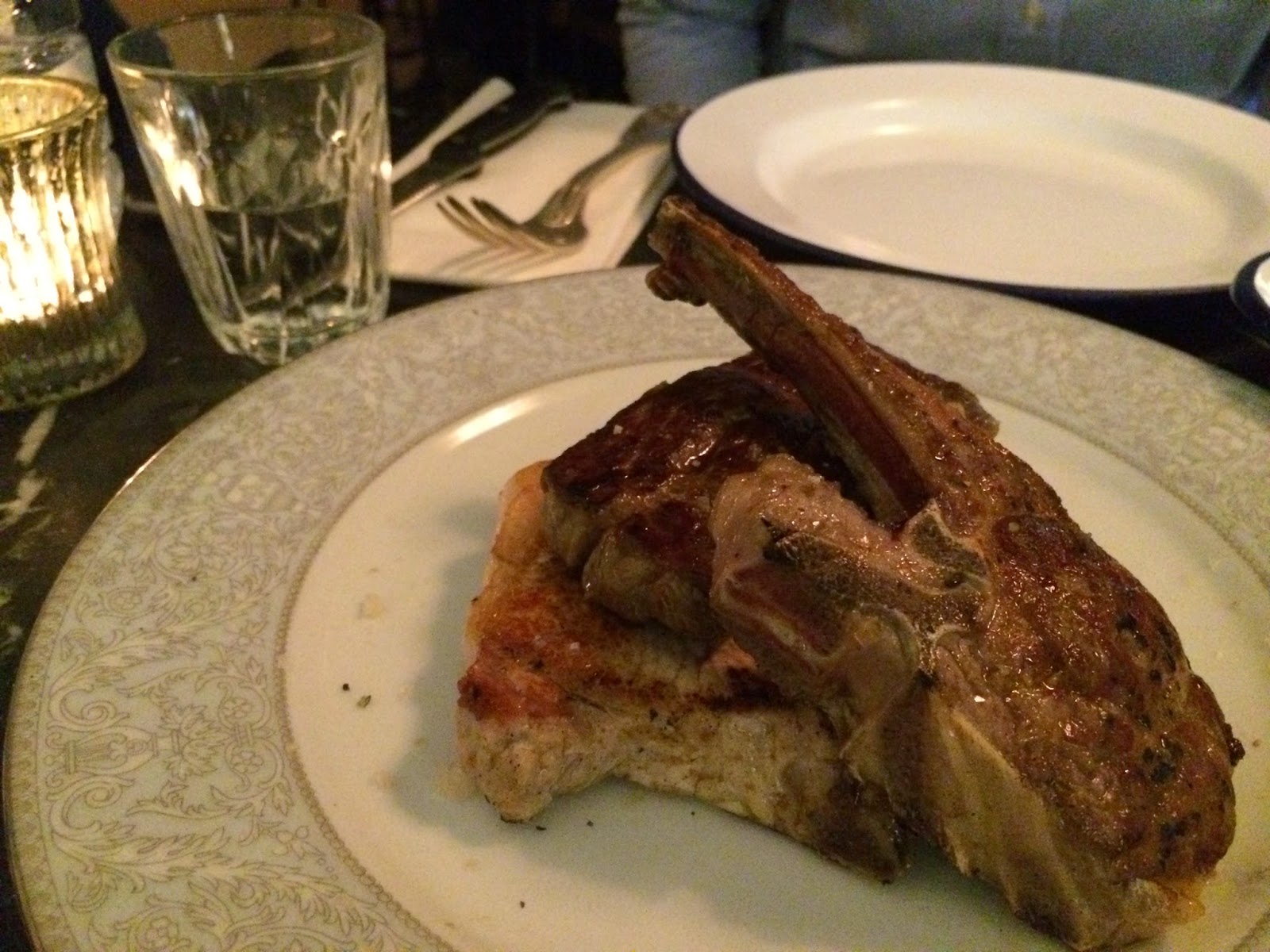 Thanks to the homemade charcoal grill that could rock up to 300 odd degrees, all three types of chops were extremely succulent. The vintage irons locked the meat juice in as soon as the chops hit the grill, while the flames worked on a charred crispy edge.

Out of the three we liked lamb chops best, cooked to a beautiful ruby medium with a healthy rind of crispy fat, where the milky flavours came from. We had to go for seconds. The beef was a short rib cut that was relatively thinner, so the meat was more cooked-through. It was still tender and juicy, though the flavours were somewhat diluted unlike dry-aged beef - but not everyone is a spoilt git.

We had another round of drinks. The Aperol Negroni was really strong, as Flora put it, a manly drink.

The pork was bigger than the others. It could have been the juiciest pork chop I've had in town and that thick rind of lard was guiltily nutty. We found the meat nearer the bone undercooked, much rarer than medium. I'm comfortable with pink pork as long as it's safe, but even the staff agreed this was rarer than usual. They assured us it was safe, happy to take it off our bill nevertheless - we left it. 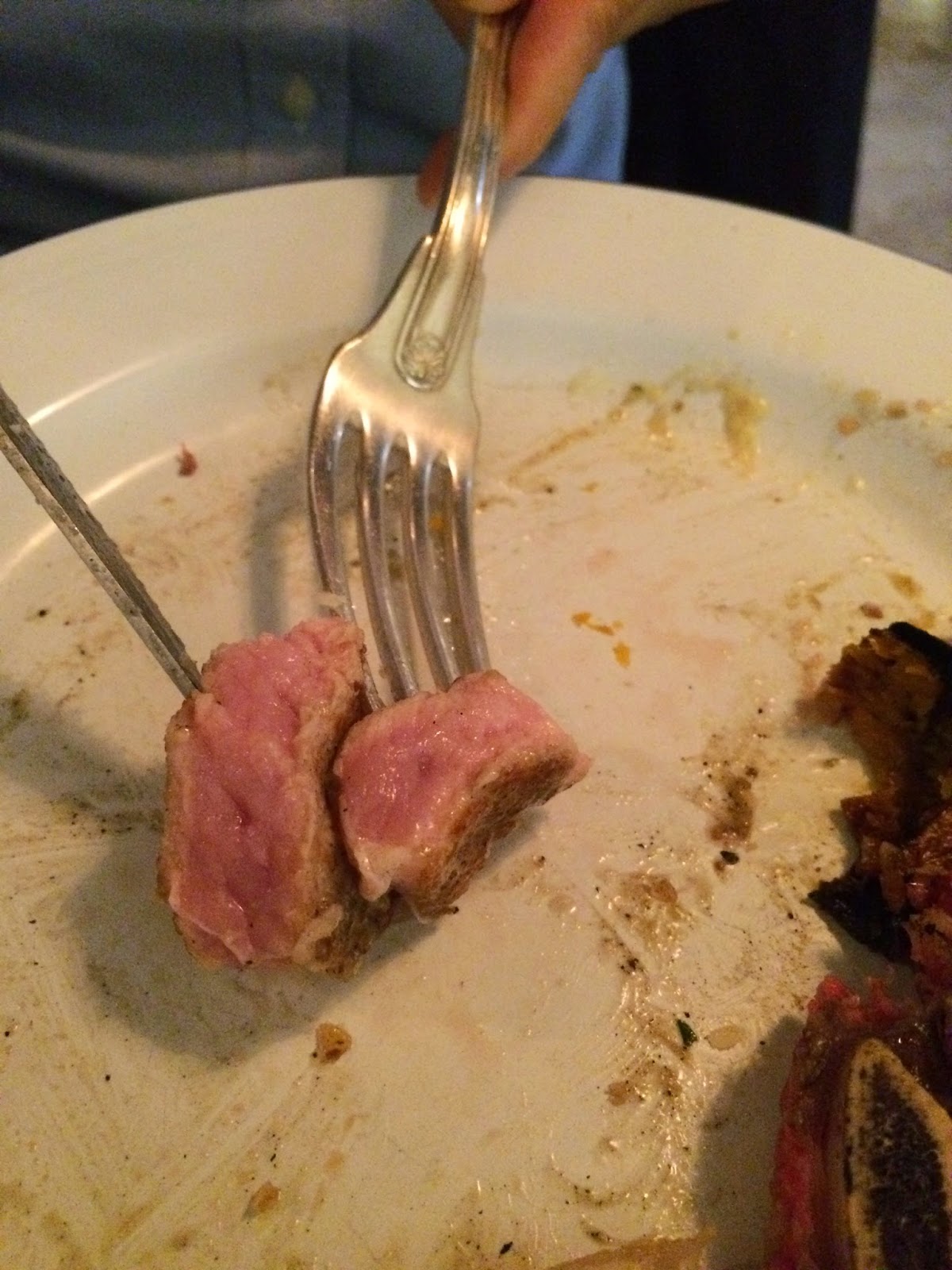 At the time of writing neither of us have symptoms of food poisoning. If this happens to be the final post I publish on here - you know who did it. 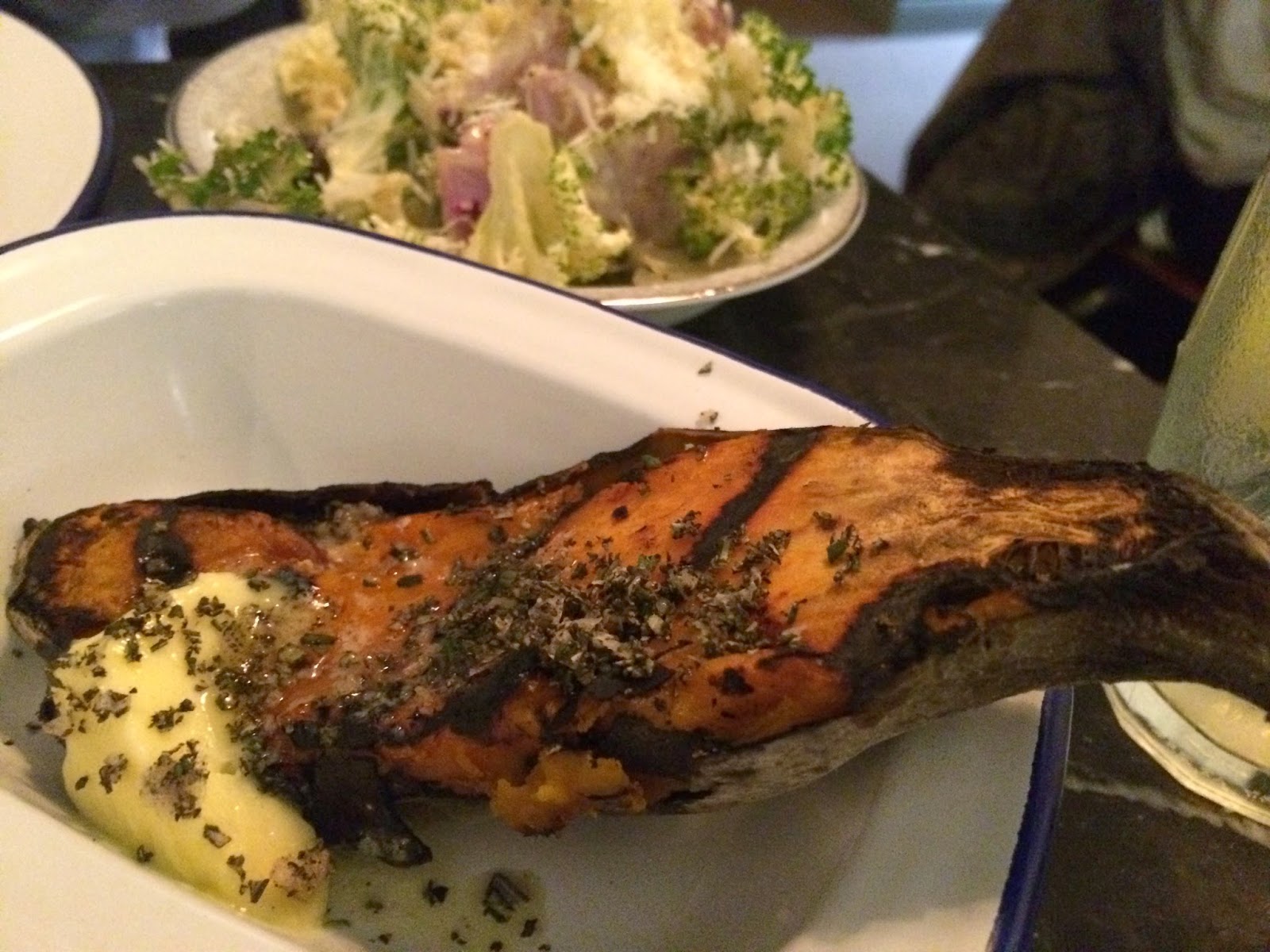 We tried out a lot of the sides too. The roast sweet potato resembled a mash packed back into it skin, served with a dollop of butter and a handful of herbs. The two ends were quite burnt and bitter but these can easily be scraped off. The kale light with a tangy dressing. 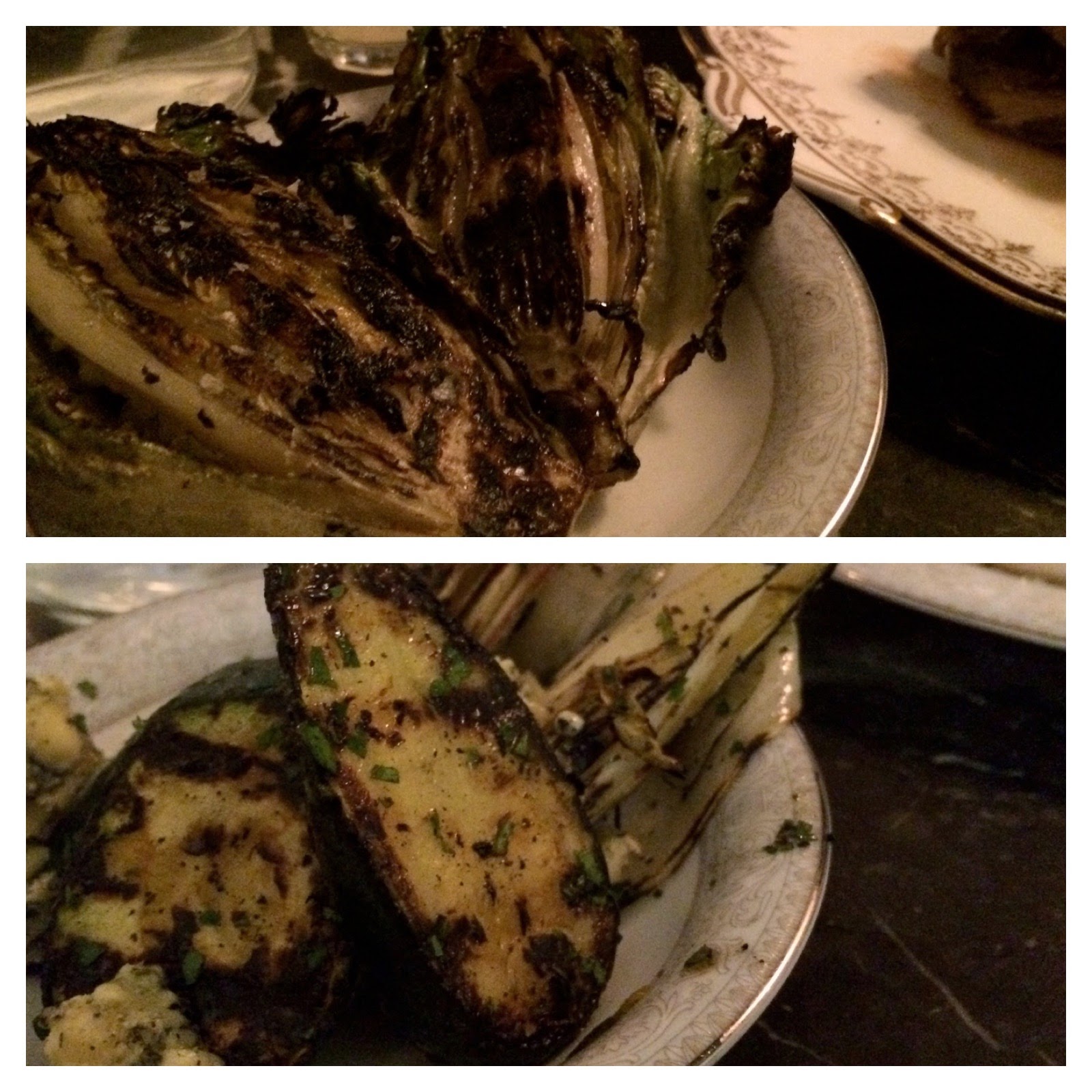 We thought the baby gems were too burnt and bitter, and all the moisture had evaporated from the grilling. The courgettes were much better with the small lumps of stilton.

For dessert it was white chocolate cheesecake with berries. Our server brought out the whole tray of cheesecake and scoop a portion onto our plate. Quite a good sale strategy, and a great way to end the meal.

We both enjoyed Blacklock. The food was good, nothing ground-breaking but deeply satisfying with piles of juicy meat. Service was super friendly and swift; yea there were a couple of hiccups like sending us the wrong crisps, but none of them were deal-breakers. The vibe was stripped back and easy-going, it was a speakeasy feel to it. I'm definitely coming back for more.