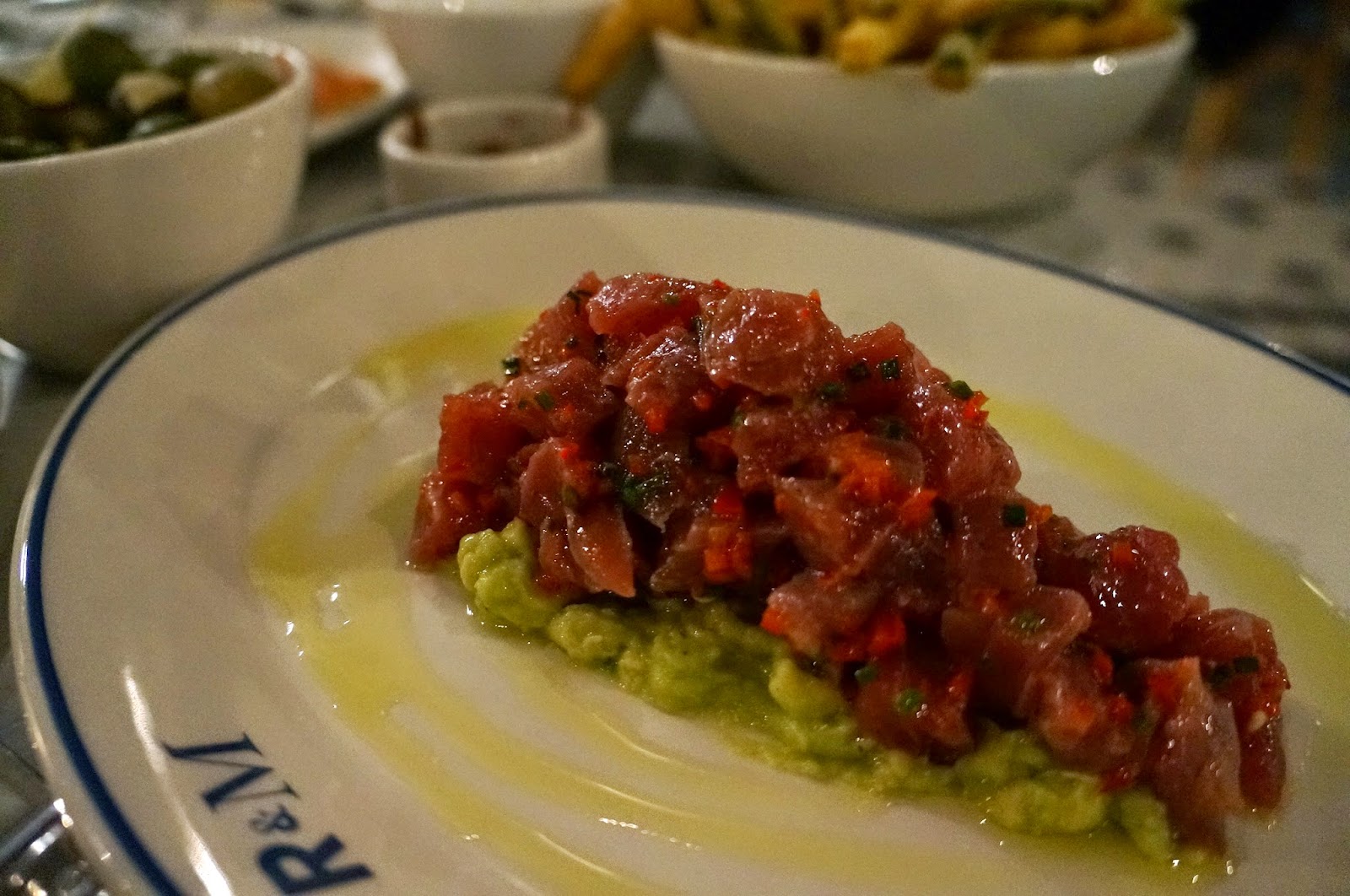 As pioneers of the dining scene in London, R&M offers cheap but quality seafood by cutting out the middleman. They are also using an IPad ordering system, a concept which many restaurants have tried and failed. What R&M does differently is to reduce the service charge to 5%; it has received mixed reviews, we'll see. 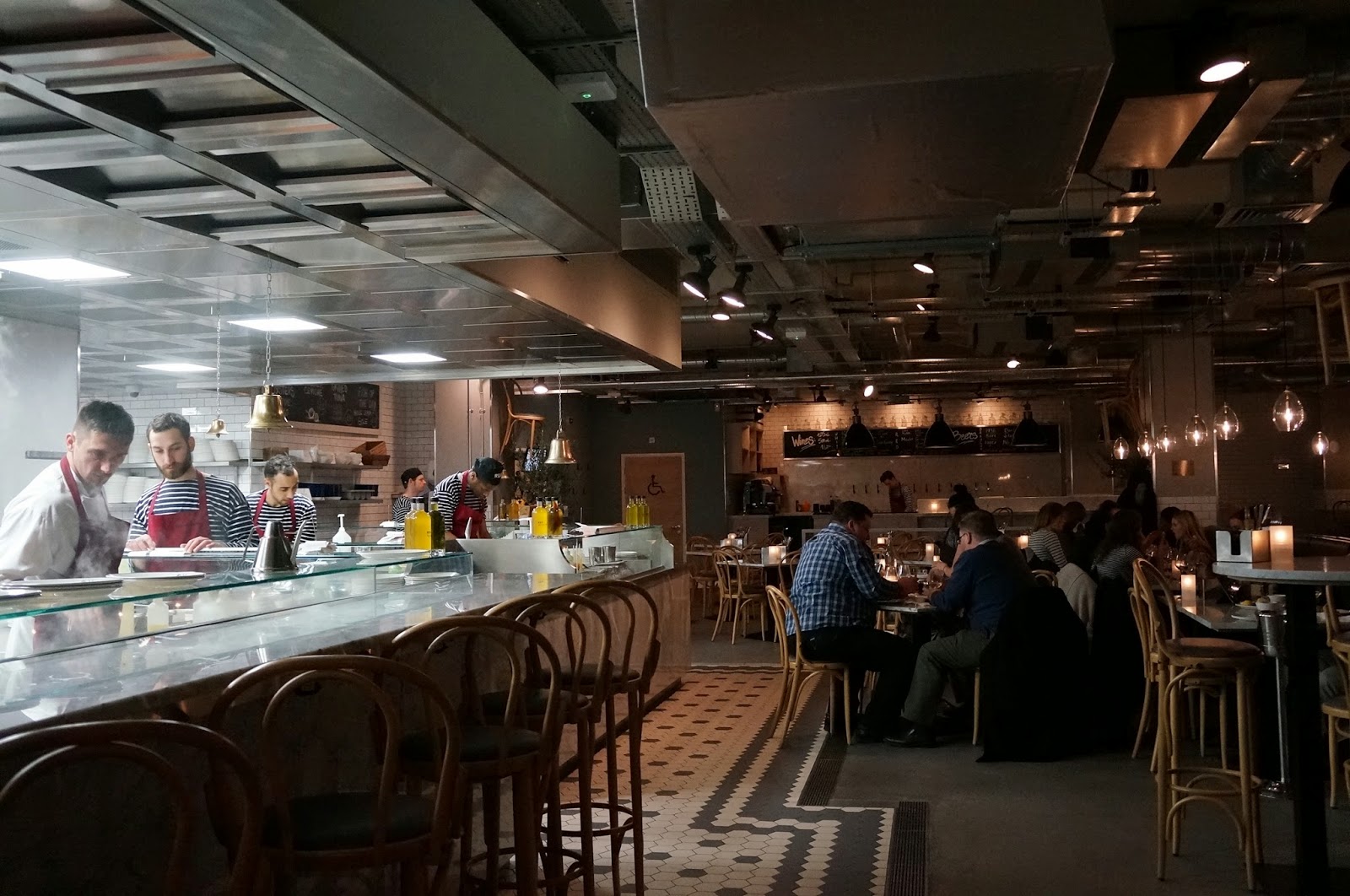 Water was brought to us the moment we were seated.We started with some olives and the bread selection as we navigated through the IPad. Relax, it's really not rocket science - you scroll, tap on things you like and tap submit. Then the food gets delivered by real people, with a smile, very speedily. 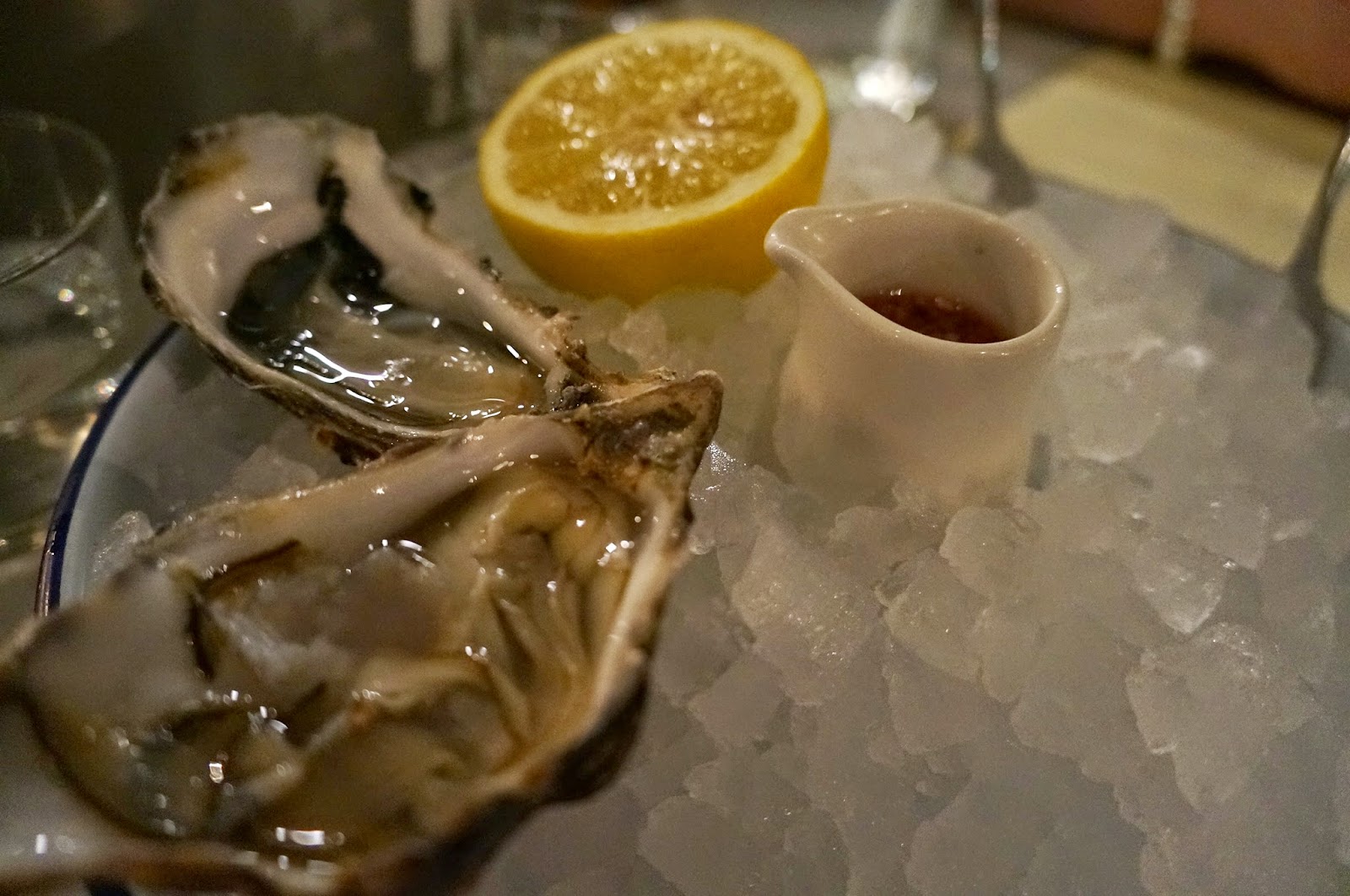 The rock oysters were a bargain at £1.50 each. Quite lean but strong on minerals, clean and crisp. 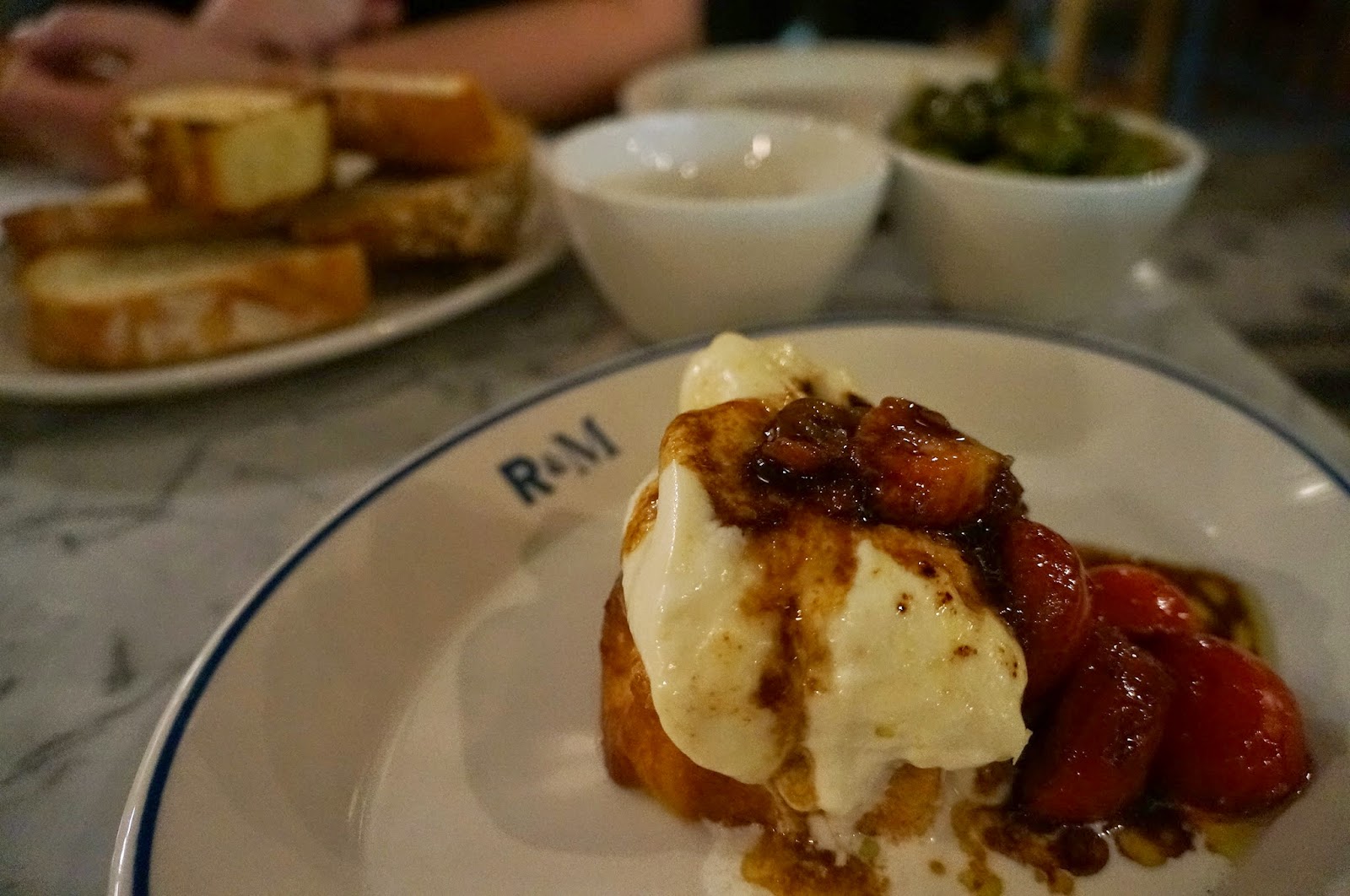 Lee has never had burrata so I had to introduce her to this stretchy, creamy, luscious cheese. R&M stuck to the basics here by pairing it with cherry tomatoes, smoked tomato and a balsamic reduction on a herby, fragrant slice of focaccia. The combination of sweet and tangy cherry tomatoes and milky burrata worked beautifully. A simple dish done well.

Then I reached for the IPad and keyed in our second round of order - at our own pace and the food arrived in no time. Smooth operation. 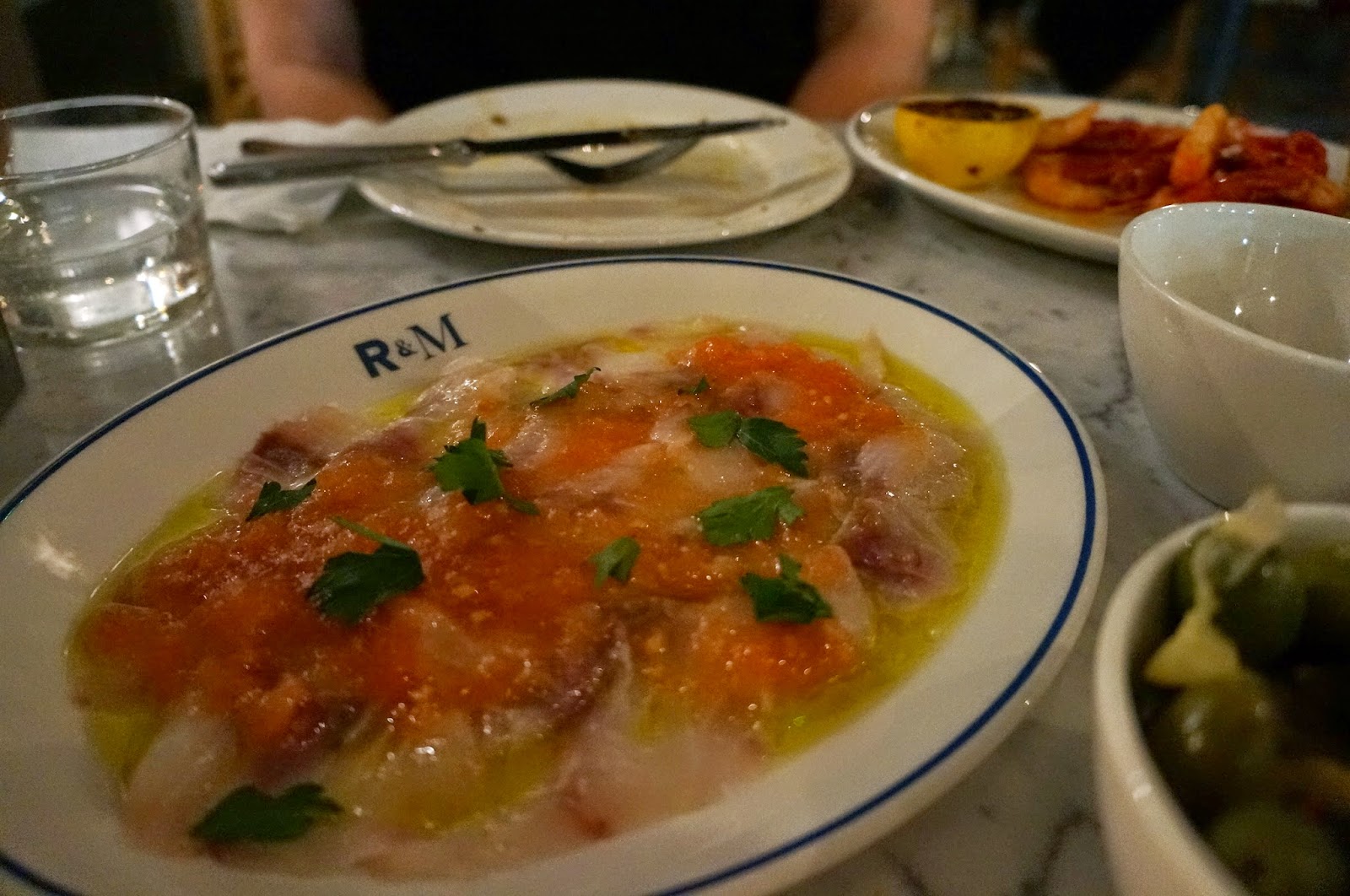 I loved the carpaccio here, though I'm sure this isn't text book carpaccio. Unlike the more conventional wafer-thin carpaccio that shows off chef's knife skills, the raw fish slices here were thick, topped with a smear of fresh tomato puree and drizzle of olive oil. It had chew and a bouncy mouth-feel. The fish itself still had little flavour, but the freshness was brought out by the clean taste from the tomatoes. It was so simply done with balance and excellent quality fish.

Plenty of tuna cubes on a bed of avocado mash, with a minor kick from the pinch of chilli. The sesame oil was a particular nice touch to leave a nutty aftertaste.

The courgette fries were also exceptional. 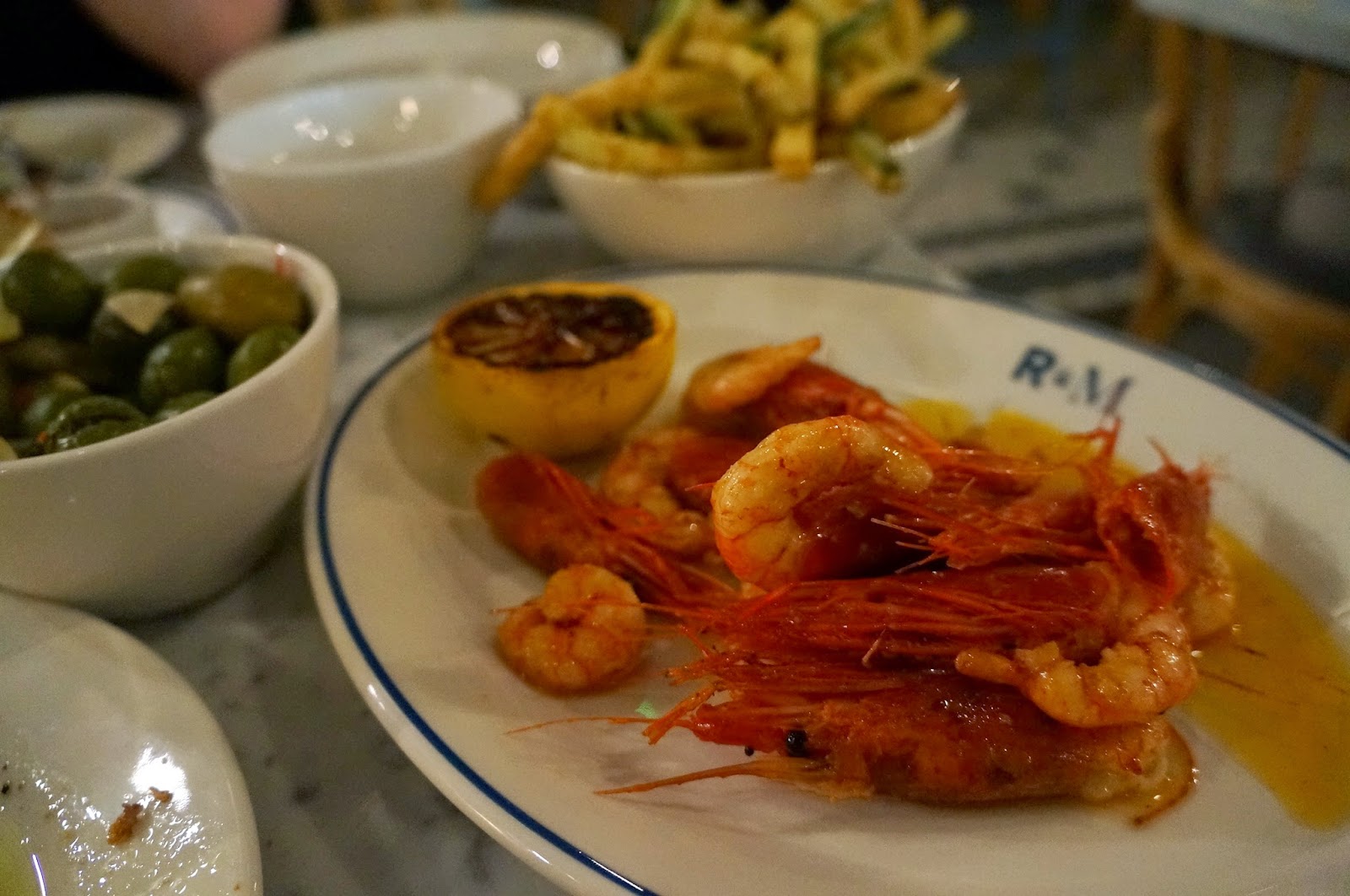 The Sicilian red prawns were supposed to revolutionise the seafood scene. I heard they also serve them at Beast from the newly introduced a la carte menu and they have been a hit. I reckon I would still stick to their steak and crab set though. Anyhow.

The small prawns had big flavours. And the highlight was hidden in the disproportionately massive heads... you gotta suck. The heads were packed with sweet and savoury oceanic goodness, and the rich taste of umami was mind-blowingly satisfying.

Lee already had her first oyster, first burrata, first carpaccio and first tuna tartare up to this point of the evening, sucking prawn heads was pushing it a bit far - which meant more for me. I wasn't too sure about the actual prawn meat, which was surprisingly mushy. I like big fleshy prawns with a crunch, though I can't fault these in terms of flavour. 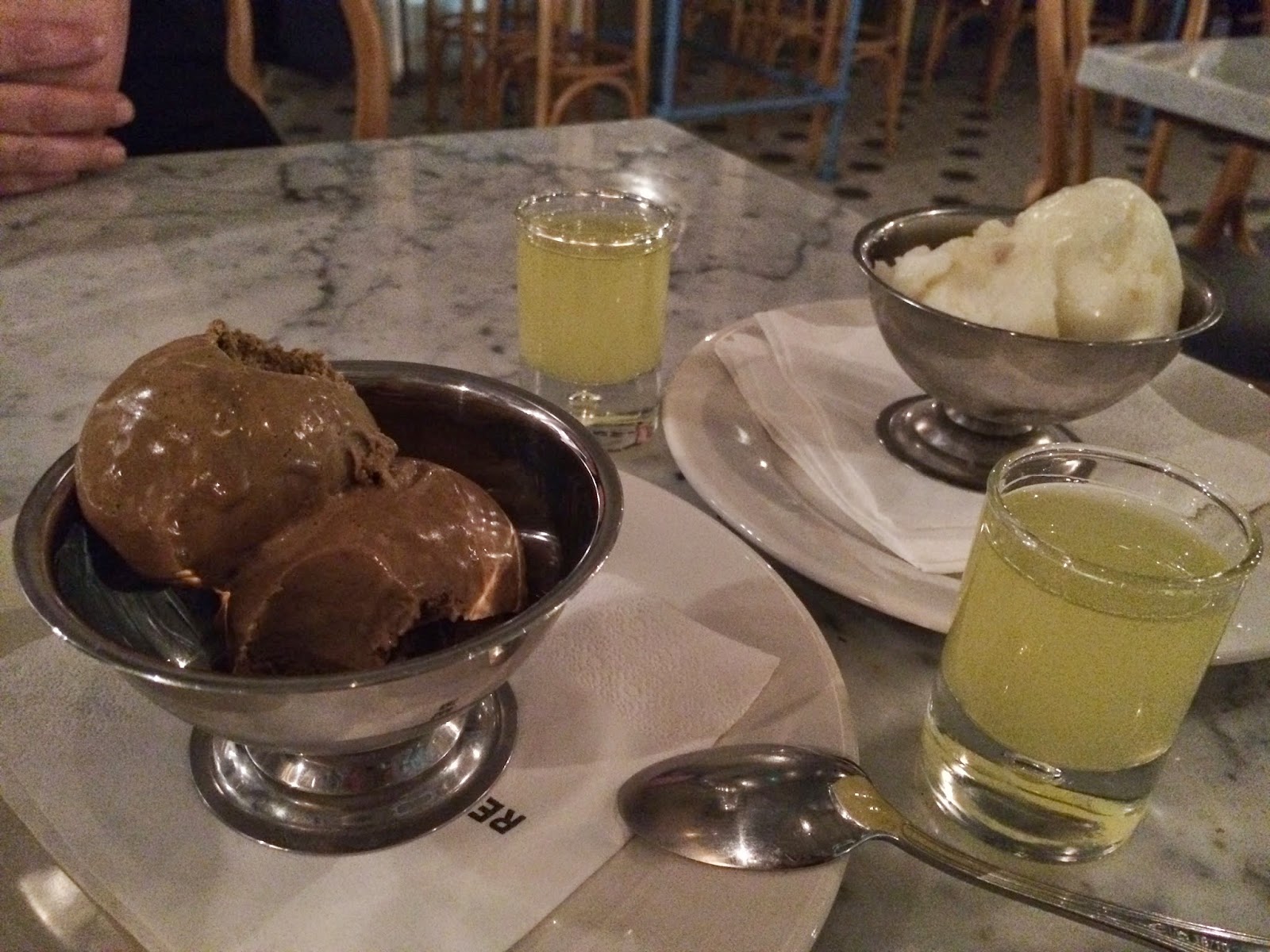 We were offered dessert on the house - I blame it on Lee's alluring charm.

It's hardly fancy dessert, but to follow the theme of the restaurant, it's simple things done really well. The espresso ice cream was strong, but so so good; lemon sorbet was refreshing with bits of crumble. I don't usually like limoncello, but this one was pretty damn good as the taste of alcohol was very subdued.

I enjoyed Rex & Mariano immensely. The cooking could not get simpler, just straight forward grilling, with olive oil and salt, maybe even a squeeze of lemon if you're feeling adventurous - so we know it's not culinary skills that they sell here. Yet we could not fault the quality and freshness of the ingredients. One could argue these can be done at home - true but I don't know where to get Sicilian red prawns and isn't that the case with most seafood dish? Especially when the prices here are pretty unbeatable.

The IPad ordering system was easy enough. It didn't take away the human touch as service was very personable and our server came to check on us regularly, the manager even sat down with us for a good chat. I can understand it's not everyone's cup of tea, but when they slash the service charge to 5%... what's not to like here?