St John - Not so Awful Offal 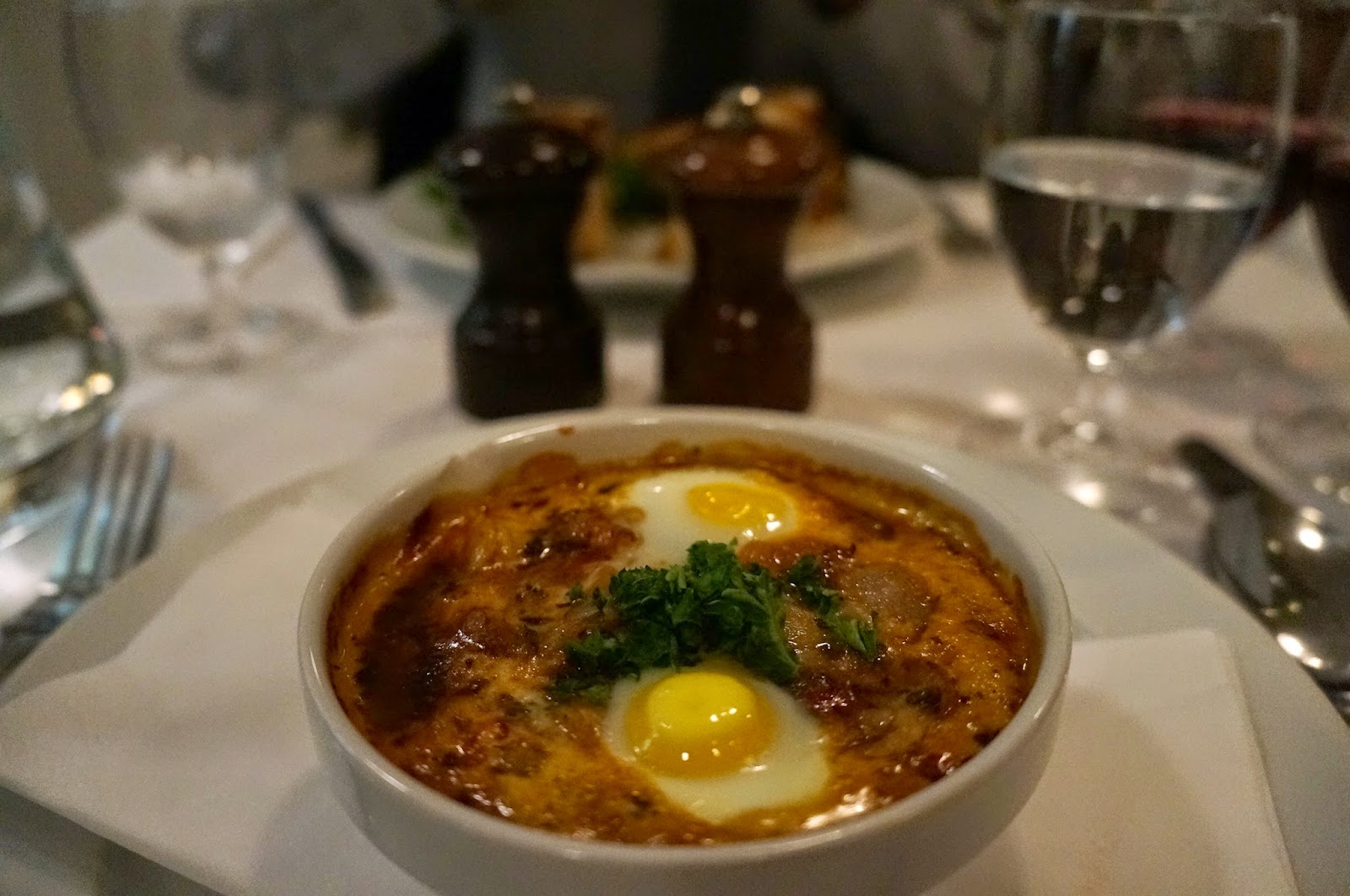 I struggled to write anything in the last couple of weeks. I started this blog 3 years ago when I tried to piece myself back together, took a while but eventually I began to feel comfortable in my own skin. Feeling I'm back at square one and crazily picking out my flaws, I looked at my About Me page from three years and realised how my world has grown - I'm stronger than I thought. So I updated my page and life goes on.


St John is a curious one. Known for their offal dishes and gets a Michelin star for serving them, I have been meaning to check it off my list, but it was surprisingly difficult to find someone who doesn’t mind the odd kidney. Twenty good reasons later, Shan put a date down and called for a table – done.

Not your typical Michelin star restaurant decor, St John was renovated from a ham and bacon smokehouse and few changes were made to the building. The white-washed walls, scratched wooden floor boards and bright white lights reminded me of the canteens in mental hospitals depicted in movies, you know, like the one in Shutter Island and Changeling, along with the waiting staff in white uniform looking decidedly blasé.

We were munching on the sourdough baked in-house while pondering over which offal dish to take on. When we asked our server for recommendations, she basically read out the menu. Yes, thank you for explaining what ‘Arbroath Smokie’ was, but no I do not need you to explain parsnips and beetroot. I’m starting to think I’m the one that looks illiterate; this isn’t the first time... the mental theme continues. We went for a bottle of easy-drinking Gamay. 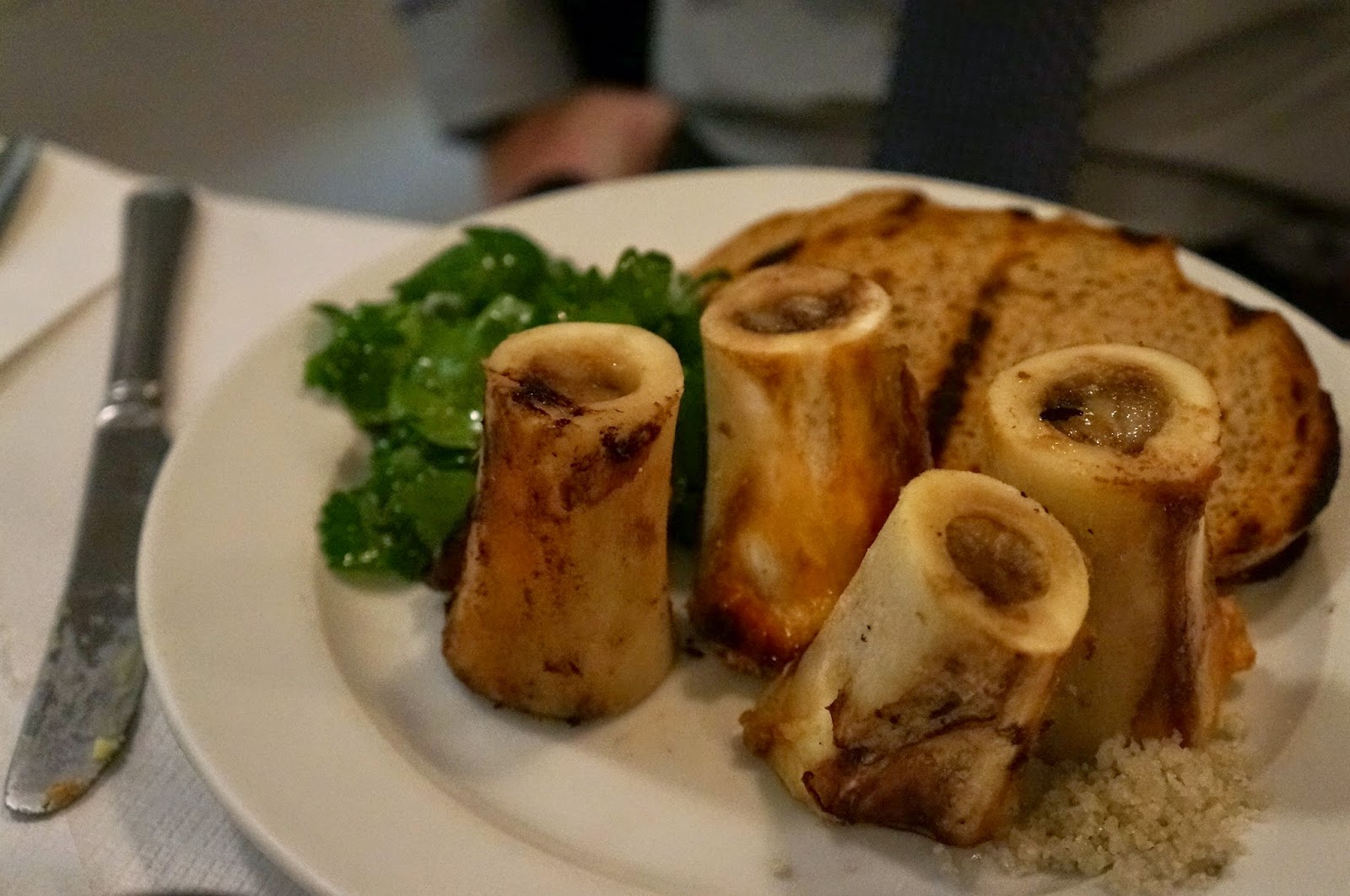 This would have been my usual choice, but I was feeling adventurous and went for baked trotters, so instead Shan bore the hard work of scraping bone marrow onto the sourdough toast, sprinkling the parsley leaves and topped with a drizzle of lemon juice.

It's impossible to go wrong with bone marrow. Fact. The sourdough toast soaked up the fragrant grease, which the gently dressed parsley salad helped to balance. The marrow simply dissolved away in mouth to leave the richest trail of bovine goodness. So so good.

While I really enjoyed it, I can't give much credit to the kitchen. I can quite easily replicate the dish with minimum effort... Hawksmoor cuts the bone length-way which makes the marrow more accessible than what they have done here.

My baked trotter was absolutely delicious. The stew was packed with the gelatinous cartilage and soft shredded meat from the trotters, slow cooked to bring out the depth of the flavours. It was a comforting dish - I could have easily devoured another helping. 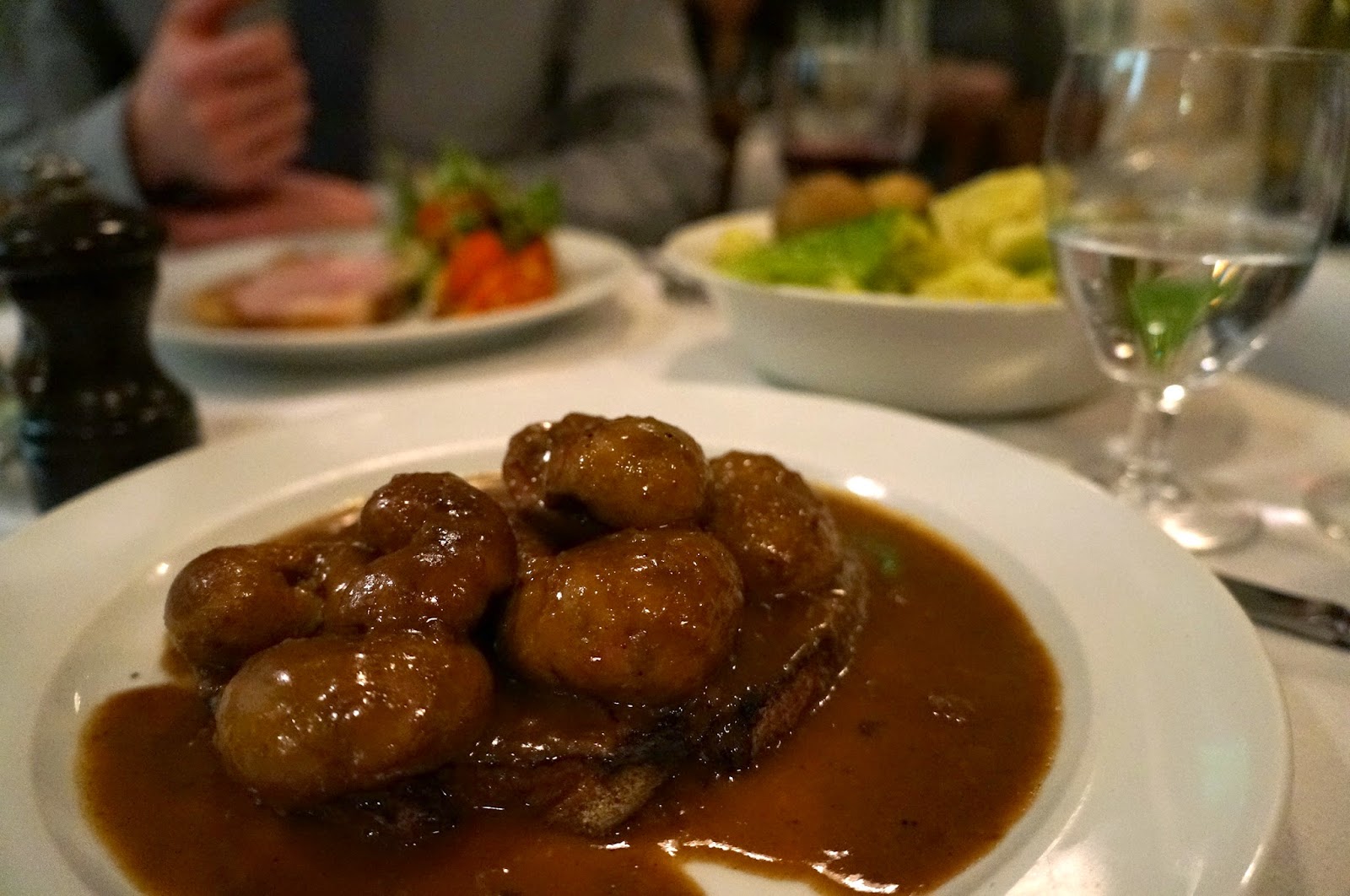 It doesn't look great... the colour and shape, Shan and I went pretty wild with our imagination. Let's not spell everything out here.

Well, it's lamb kidneys. A lot of it. On a piece of toast. Floating on gravy. Lots of it too. I am just not sure what to make of it. The kidneys were bouncy, the mouth feel was akin to coarse pate, not quite velvety but not grainy either, it was textured smoothness. The cooking was precise. Thankfully they didn't carry the strong pungent smell of offals, just a hint from the iron but the thick, savoury gravy dominated. Shan begrudgingly took his half of the dish, can't say he was particularly enthusiastic about finishing it. We agreed it wasn't unpleasant, though presentation was slightly off-putting, glad we tried but probably not again. 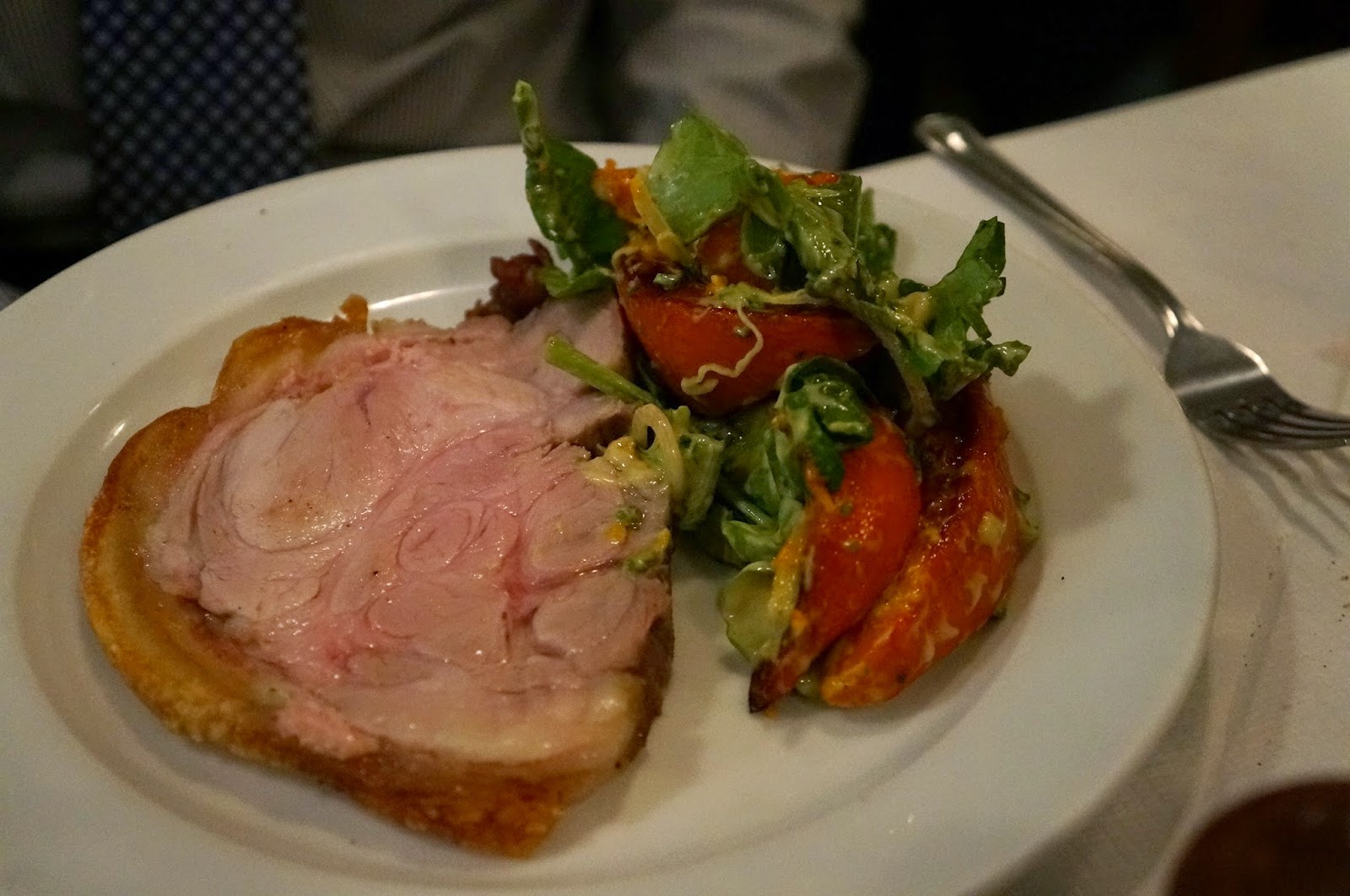 This was their signature dish, and it was a damn good slab of roast. The pork was glistening in its sweet meat juice, oozing succulence. The moisture was well-retained leaving the meat soft and tender. The crackling was beautifully roasted to a fragile brittleness on the top but a good crunch at the base, followed by a thin layer of gooey lard for that piggy nuttiness. We agreed it reminded us of the Chinese version of roast pork, but perhaps less fatty. It was no doubt the highlight of the meal.

I really liked the dressing on the greens and the sugary roast pumpkin on the side too. 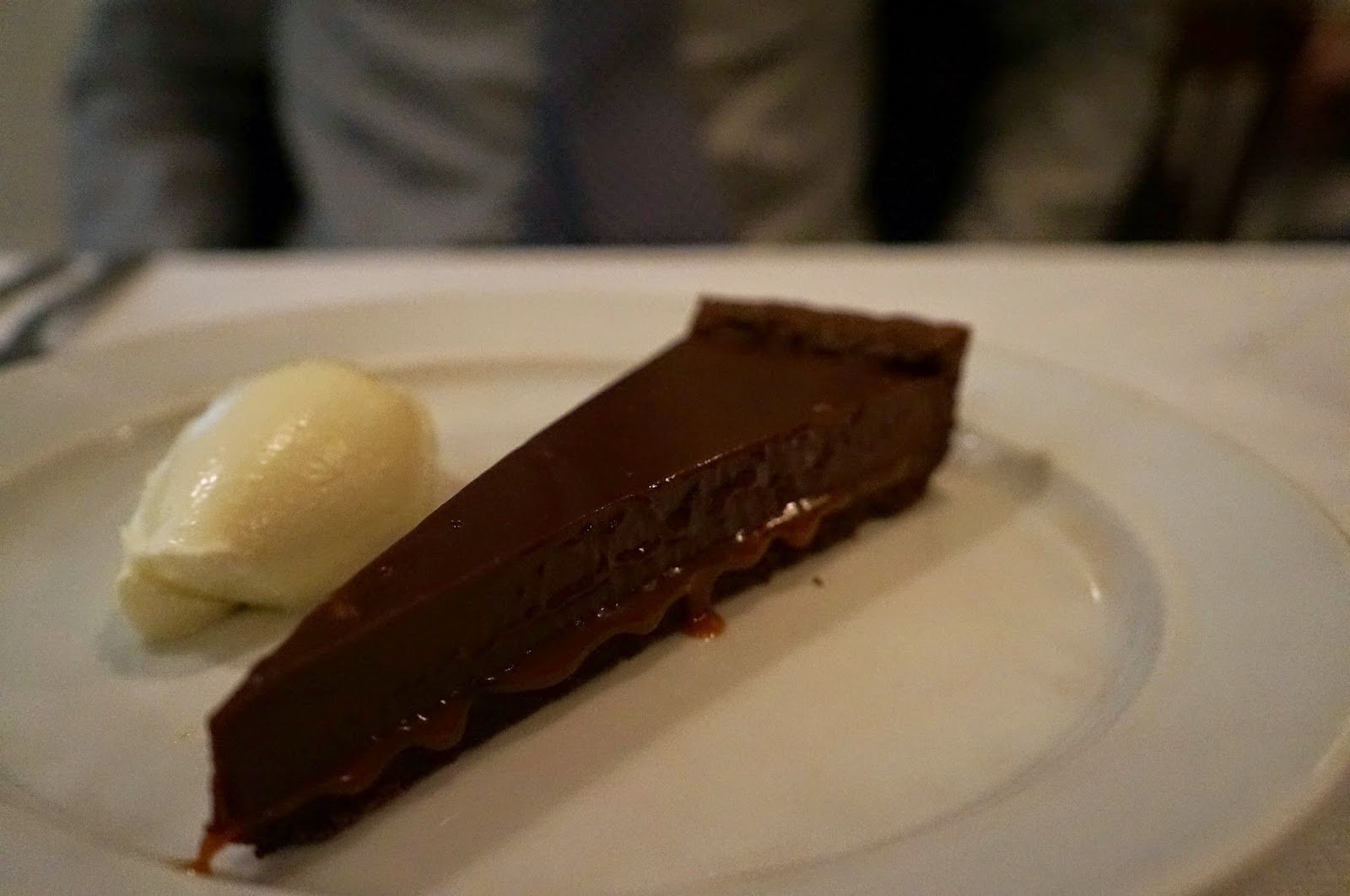 We ordered half a dozen of madeleines and the salted caramel chocolate tart while we waited. The tart itself was really nice, rich and bittersweet. What I didn't like was the yoghurt ice cream, I was expecting something sweet but instead got an unsweetened frozen yoghurt. 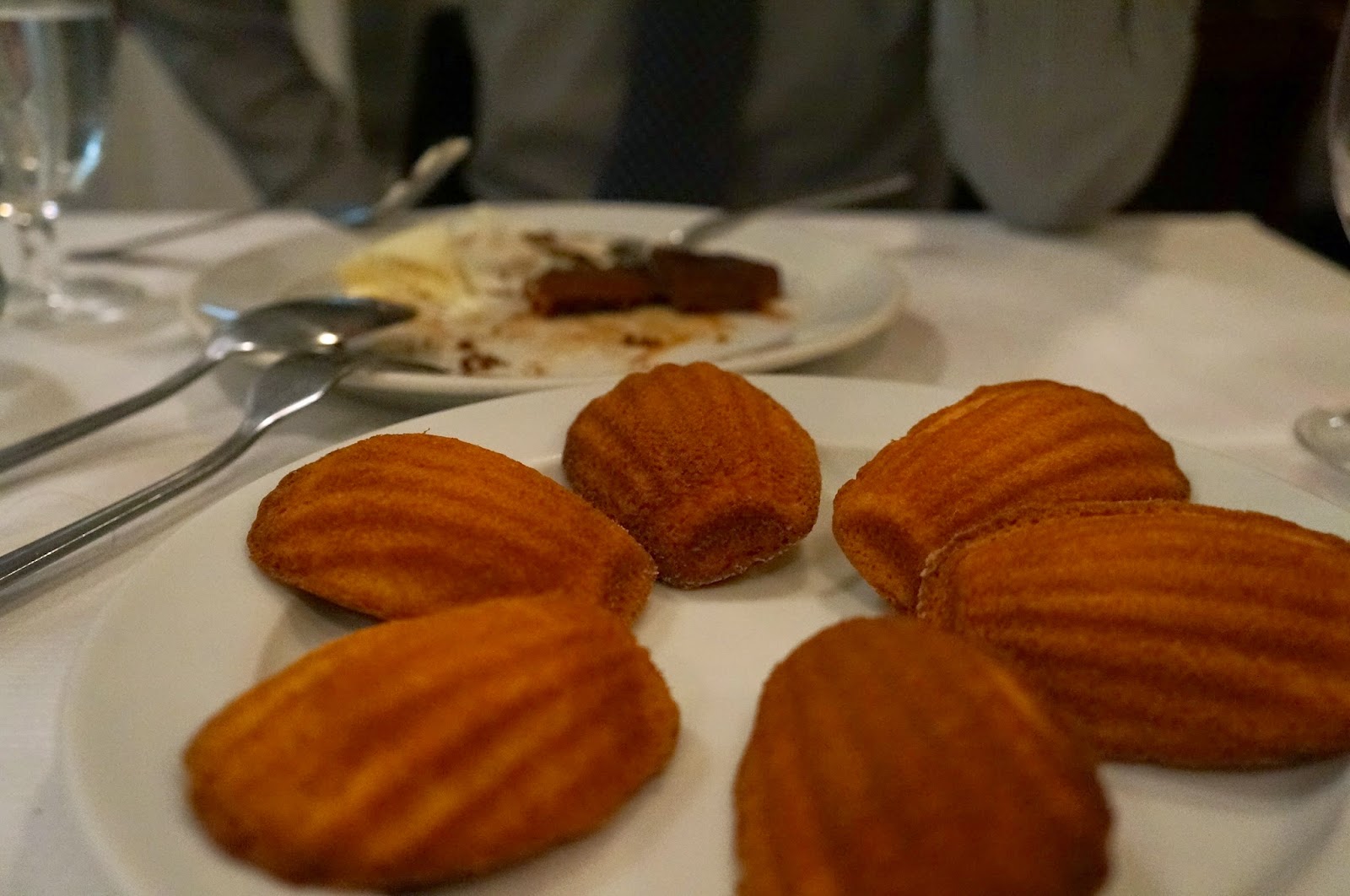 The madeleines were as good as I remembered them from St John Bread & Wine in Spitalfields. Buttery, rich, fluffy... I got an extra bite coz I'm special.

After we left St John, we had to re-confirm if it was awarded with a Michelin star. It didn't feel like it. Apart from the plateful of kidneys, which was a challenge we set ourselves, all the dishes were very enjoyable. However none of them had much finesse, twist or obvious exemplary culinary technique. Perhaps we were expecting a very technical meal, or something fancier. Instead we got straight-forward and comforting British dishes. We had mixed feelings; it was a great meal, but I'm unlikely to be rushing back.

You may also like: Launceston Place, The Gilbert Scott, The Harwood Arms
at 15:04