Battle of Crabs: Mellben Seafood vs No Signboard 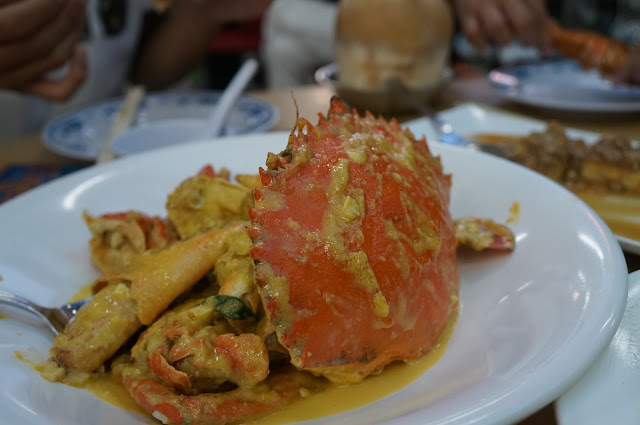 My family aren’t massive crab eaters, Mama and Papa Chan prefer lobster and Bro has no love for seafood. That said they are still keen to try the unofficial national dish of Singapore. So my search for the best crab restaurant begins. For each recommendation made by a local, there was a counter-proposal made by another. My shortlist came to: Mellben, No Signboard, Jumbo and Longbeach. One thing at a time.

I originally wanted to take the Chan clan to Mellben, as their signature dishes aren’t spicy. However location, location, location - none of their branches worked with our agenda. Instead we headed to the original No Signboard at Geylang. Proper local style here, the vast outdoor seating with overhead fans, foldable wooden table and plastic chairs is how things were done in the past. We got there early at 6:30pm when the restaurant was half full, by 7 it was a full house with a small queue. We started with a couple of beers and a large coconut. 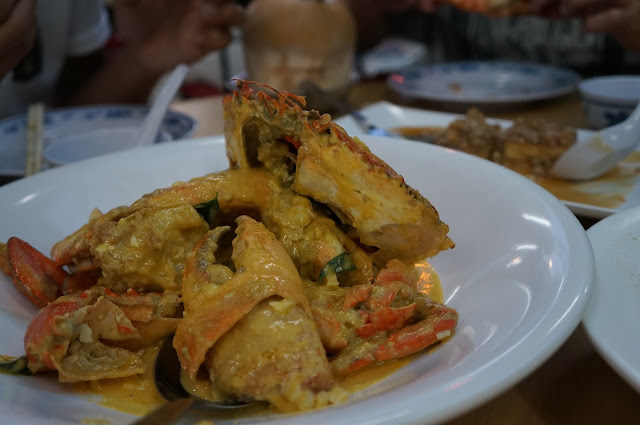 And I know it’s not fair battle because I didn’t order the signature White Pepper Crab at No Signboard. I wanted to, but Mama Chan and Bro have a rather low tolerance for spicy food, so it was safer to order milder flavours. I wouldn’t want them to miss out.

Female crabs have richer roe and male crabs are meatier and more muscular. For the sake of Dad’s cholesterol level, we opted for a 1.2kg male Sri Lankan crab. And boy it was a hunky beast. The flesh was bouncy and succulent; the shellfish sweetness was accentuated by the savoury salted egg sauce. There was much satisfaction tearing the claw meat from the cracked shell.

I love salted egg sauce, ‘golden prawns’ is one of my all-time favourite Canto dishes. The salted egg sauce was delicious, runny enough to coat the crab but the flavours were not diluted; the graininess was still detectable to add textures. We readily lapped up the sauce with the fluffy fried buns (‘man tou’). It was praises all round. 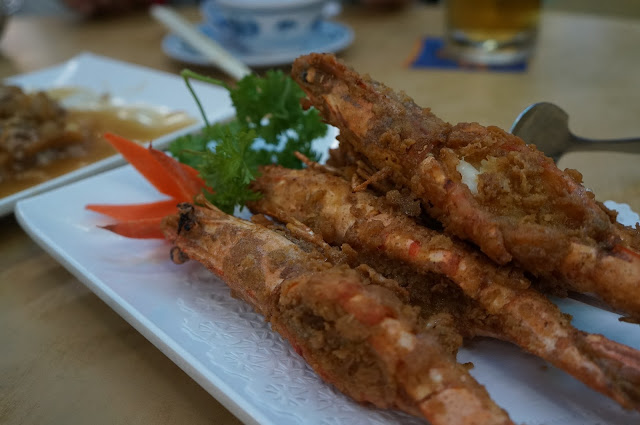 The butter prawns (or crab) here aren’t the same as the usual rich buttery sauce, instead the prawns were deep fried with a butter paste, which tasted a bit like a savoury cookie dough - it smelt heavenly, as one would expect from slightly burnt butter. The shell was ultra crispy with some added crunch by the cookie batter, the prawn meat was springy and tender, not as sweet and juicy as the crab, but still very fresh. I prefer the saucy version though. 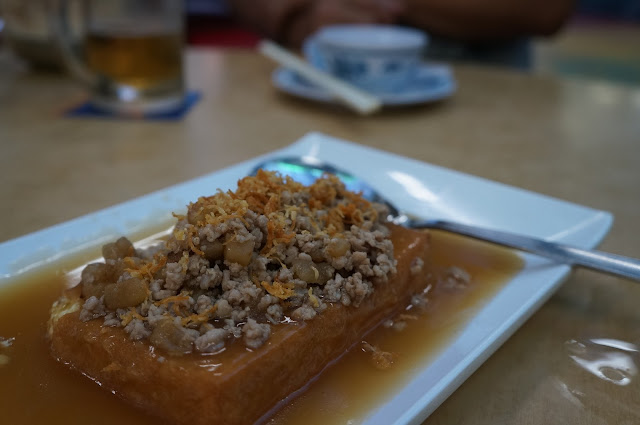 Our server recommended this and it was a pleasant surprise. The fried tofu skin soaked up the gravy, and it was oozing with flavours with each chew. The beancurd was silky soft, which nicely contrasted with the mince pork and diced shiitake mushroom topping. It was a familiar ensemble executed very well. 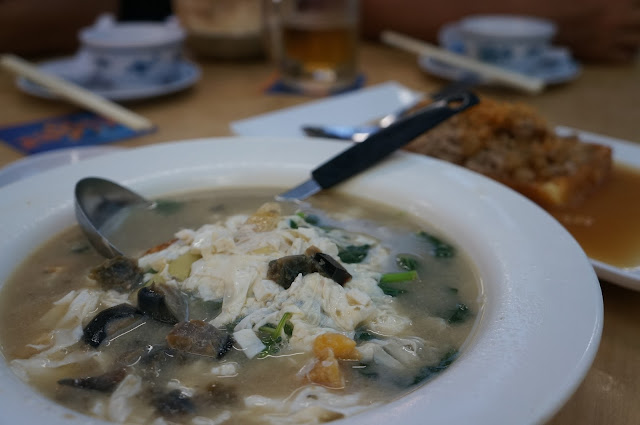 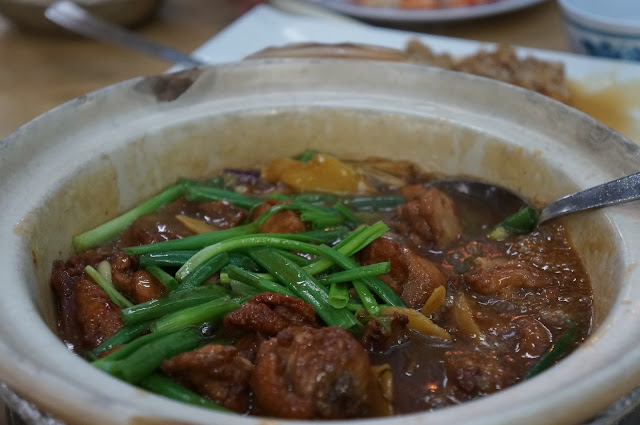 This was one of the very limited non-spicy meat dish. It was packed with chunks of chicken in a thick fermented bean and soy sauce in ginger and spring onion. The meat retained its moisture and absorbed the richness from the sauce. It was hard to steal the limelight from the crab but this did quite well.

On another evening, with a significant someone for another occasion, we checked out Mellben. We were late to the Ang Mo Kio branch. By late I mean 10pm and we were their last order, so we weren't given many options for our crabs - seeing they both had  an insane amount of roe, I’m going to guess these were female crabs. 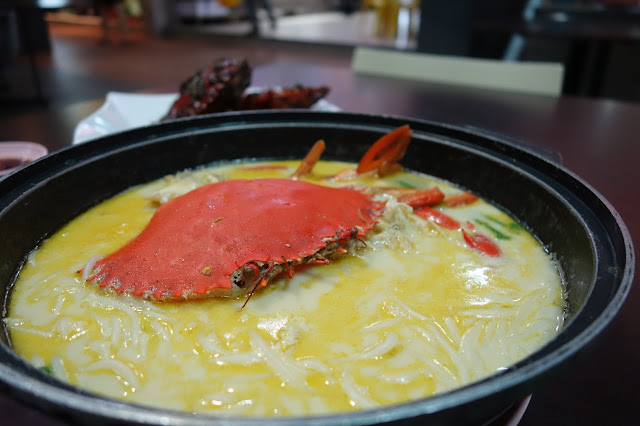 This is their signature dish. A whole crab is cooked with a milky broth and thick vermicelli. The broth was insanely sweet, packed with the oceanic goodness from the beastly crab; the roe dissolved into the creamy stock to add extra depth and umami, making it extra luscious and tasty. The slithery rice noodles encouraged more slurping of soup, each mouthful bursting with pure shellfish bliss.

The actual crab itself was slightly disappointing. Perhaps because we got the smaller ones left and it was a female crab, the claws were not as brawny as I had hoped for. It was still very fresh and cooked to perfection however. What the crab was lacking, the broth made up for. 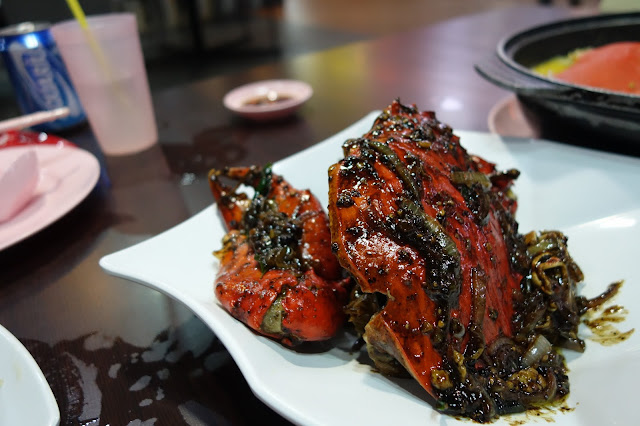 Since we made the special trip, we indulged on a second crab dish. As I mentioned above, it was a comparatively small female crab. I really liked the pepper sauce; instead of a heady peppery punch, I was first met with palm sugar sweetness, then the fragrant heat from the abundant crushed black peppercorn began to seep through. But it wasn’t overpowering spiciness that got  my head spinning, just a stimulating amount of heat plus plenty of aroma that complimented the crab, not drowning it. It was hard to choose between this one and the bee hoon dish.

Like I said, it was hardly a fair battle as I didn’t get a chance to try the signature white pepper crab at No Signboard, and I would have liked to try the butter crab at Mellben too, preferably when there are more crabs to choose from. That said I may be swaying slightly towards No Signboard at Geylang, because the crab itself was better. Also he made a good point, while the meal at Mellben was generally good, it’s questionable whether it was worthy of the journey to the middle of nowhere, and the potential queue if we were to visit at normal hours.

Papa Chan has requested a second (peppery) visit to No Signboard in few weeks - updates to follow.