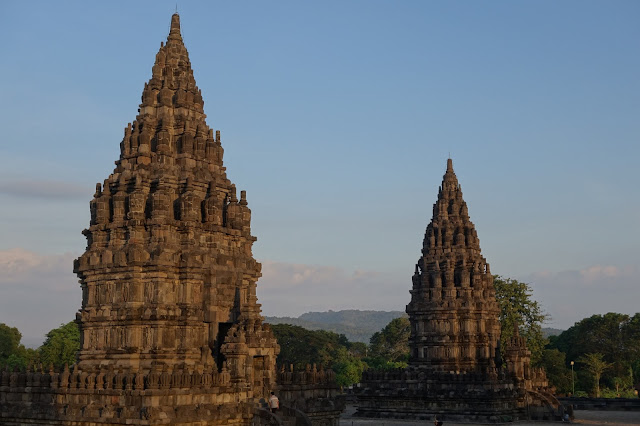 We had 4 days. He’s seen all the SE Asia that I had on my list and we were trying to limit flying time to <2 hours. Java in Indonesia fits the bill - the fact that it’s not yet overly exploited by tourists was a bonus.

The starting point was Yogyakarta, a small city in Central Java. I sometimes forget how small an airport could be; the arrival area was the size of Goodge Street station ticket hall in London. It managed to pack in a visa-on-arrival booth (USD30 for British citizens), two immigration desks, a fifth of a luggage conveyor belt, and two x-ray scanners for ‘customs’, not to mention the plane-load of people. 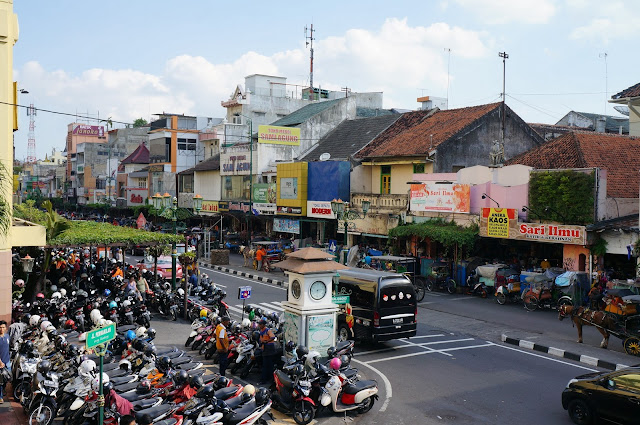 After pushing pass the hordes of eager taxi drivers, we found ATMs at the far left corner from the exit. Yea not all the cards work at all the machines, even with the ones that work, there seemed to be a cap at 1.5million INR per day. Might have been us.

You could do it the easy way - hop on a taxi that takes you from point A to point B, get a private tour guide that drives you everywhere etc. Or you could really test the girl at the tourist information kiosk by interrogating her on absolutely every little detail on public transport, from last bus to Borobudur to local food that she would recommend at the bus terminal - she suggested McDonalds in case you’re wondering. Anyway, key info was Bus 1A gets you to the city centre. We wanted to hit Borobudur straight away as we booked our accommodation there to catch the sunrise the following morning. Way to go was Bus 3A, guy will tell you when to change for 2A, which took us to Jombor bus terminal. The bus itself has been through history and back, probably fought the world wars and now serving its final years. Granted, it moves. I loved it. 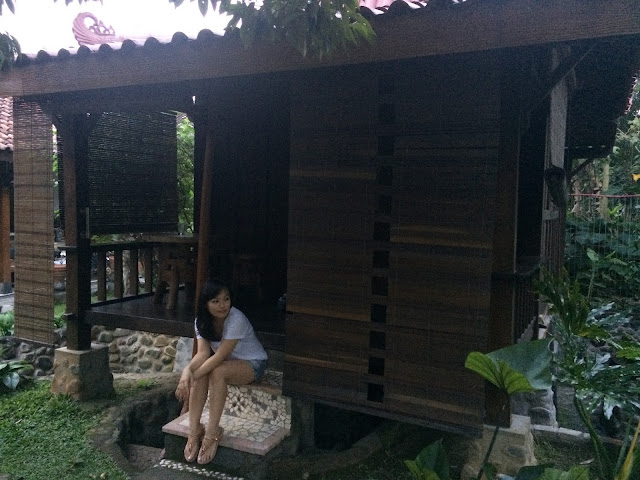 About 90mins later we arrived at the village centre, where a very persistent tuk tuk driver took is to Omah Garengpoeng Guesthouse. I love the tuk tuk ride, partly because I didn't have to crane my neck to see where we were going. It’s a bit further out but it was one of the prettiest ones - we went for a bungalow. If it’s good enough for Everton FC, it will do for us. Our host, Erwin, was wonderful - he pretty much said yes to whatever we asked for. Our home cooked dinner by his wife was delicious; turns out she offers cooking class and writes Indonesian cookbooks. 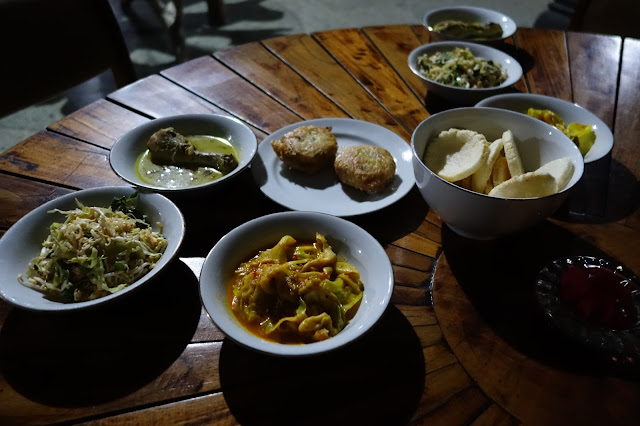 At 4am the following morning, Erwin drove us to the Manohara Hotel where people purchase the Sunrise Borobudur ticket - at 380,000 INR it’s close to mugging. It doesn’t allow re-entry, nor does it allow packaging with Prambanan-entry like the normal ticket. All it does, is that it allows entry to the temple site 1.5 hours before official opening hours (6am), plus a torch to shine your way up. Don’t even get me started on people with their stupid torch. 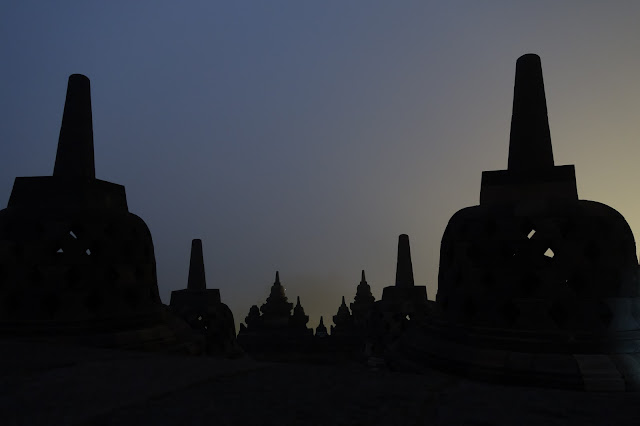 Unfortunately it was a misty morning, I didn’t get the pink hue of sunrise I was hoping for… On the plus side, it wasn’t hot, number of people was manageable, and it was quiet, until you bump into a group of high-energy Singaporeans that have clearly graduated from the School of Professional Posing. 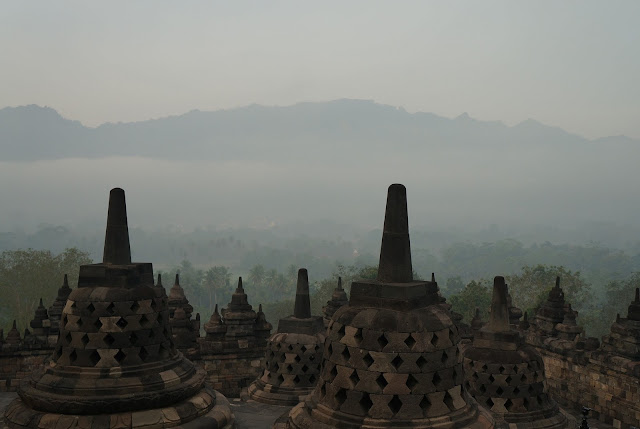 I think 4 hours is sufficient. We had a couple of hours to spare before Erwin pick us up so walked up Dagi Hill. While the view overlooking the temple wasn’t great, it was a quiet spot. And I like quiet - it lets my butterfly mind wander; happiness is when I’m filled with happy thoughts, however random and however far-fetched. While the man desperately tried to cool, I stole a snug nap. 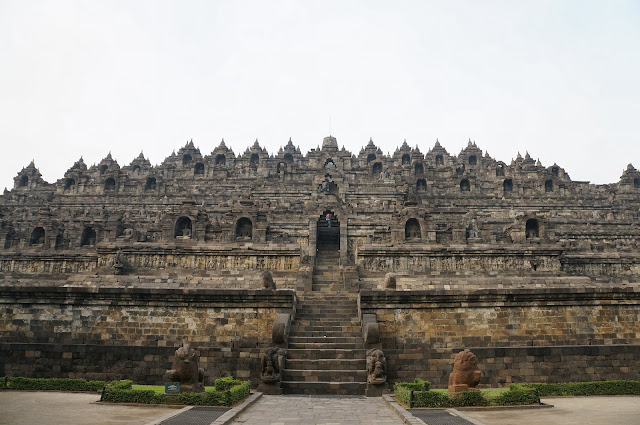 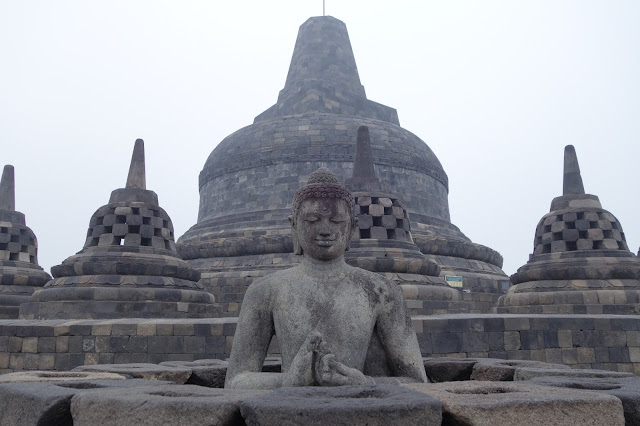 After a couple of 'celebrity shots' with the white guy, breakfast back at the guesthouse and a 45-min wait for the bus later, we made it back to Yogyakarta. Recommended by the hotel receptionist, we had the entire garden restaurant, Legian, to ourselves. No locals would eat here. He had the local Gudeg with chicken. I still can’t work out what the other meat was… it was alright. My mutton Gulai, a yellow turmeric and coconut curry, wasn’t worth mentioning. 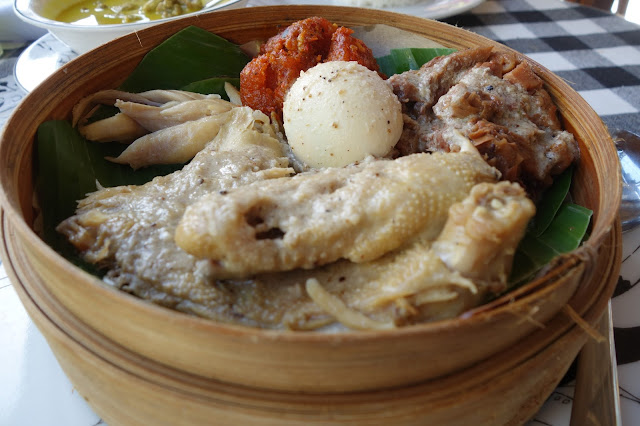 An hour on Bus 1A later, we arrived at Prambanan as the final stop - the entrance to the park is a 10-min walk. The ticket office closes at 5:15pm, we made it around 4:30 as I was hoping to catch some sunset shots. 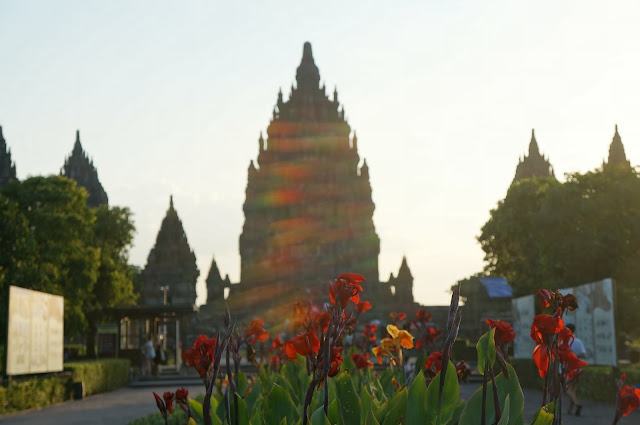 The main temples were dedicated to the Creator, the Preserver and the Destroyer. We were told there is a Ramayana ballet dance performance every other evening in the Prambanan theatre at 7pm; our visit did’t fall on the right evening - I've missed out. 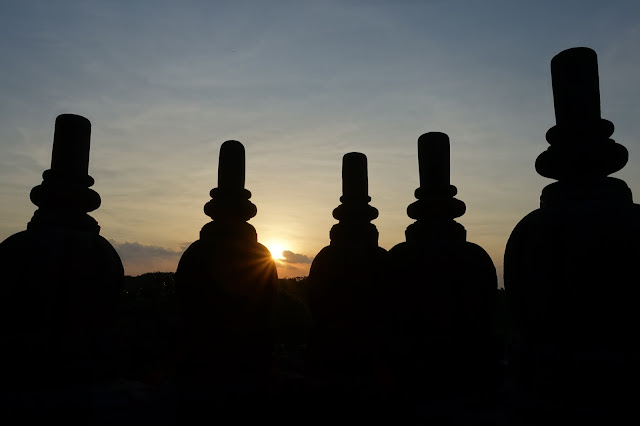 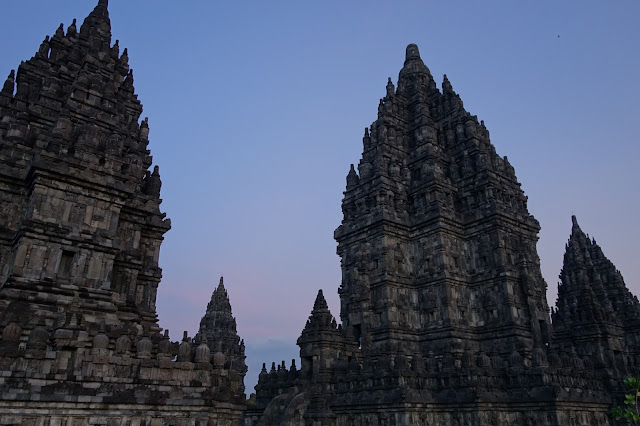 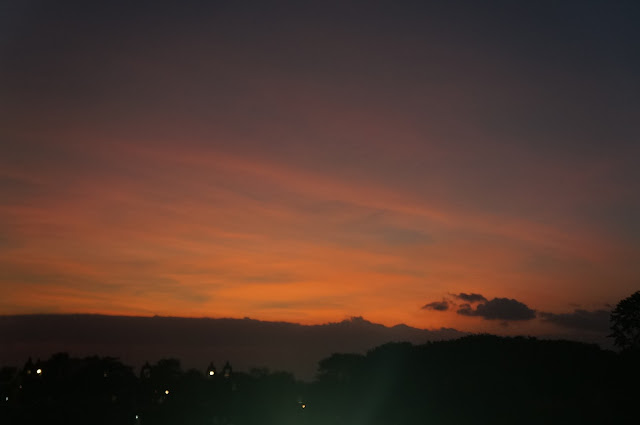 We then took the bus back to the main street, Jalan Malioboro, where the food stalls have overtaken the pavements. We picked a busy one. Basically just ordered anything - the people were super friendly. The sweet chilli crab was meaty and just spicy enough (though we met a girl later on that told us her guide said some crabs could be dodgy because of a recent oil spillage… we survived), the veg had good wok hei (gosh I’m writing Singaporean speak!) and the clams, more like cockles, were sweet. Mama Chan cooks better baka fish though:) 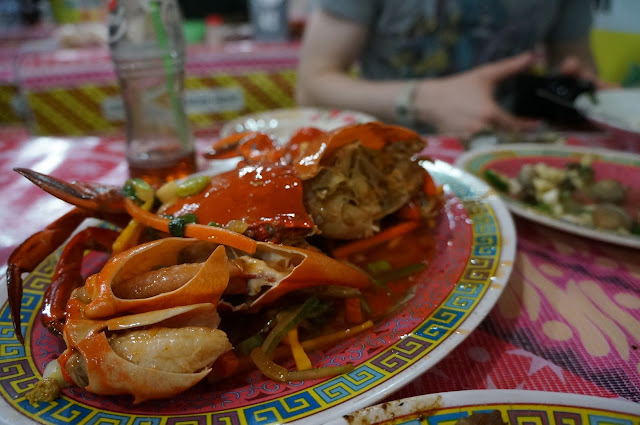 The next day was pure transit: 4.5 hours train from Yogyakarta to Surabaya - glad we booked in advance, both business and executive class have aircon. Then 45min taxi from the train station to Purabaya bus terminal, from there 2-hour bus to Probolinggo, followed by an hour mini-bus ride up Cemoro Lawang, which is the village closest to Mount Bromo. That minibus is basically a shared taxi, on quiet days where no one is heading up, one could end up paying for the bus.

Yea they say it gets chilly up there. Well, depends where you’re from. Given we have been through enough disappointing British summers. It was breezy, though I have had cooler London evenings in June and I was in short shorts. Mind you the locals are selling woolly hats. We stayed at Cerama Indah hotel. How do I put it… I wouldn’t go as far as calling it a shit-hole, but the bathroom smelt like one. There was general dampness in the room but also the lingering air of they-don’t-give-a-shit-about-you-coz-you-get-up-at-3am-anyway. On the plus side, one couldn’t fault the location and the staff provided information about the walks, albeit completely fed up. Their expression says not only do they answer the same shit over and over again, they could pre-empt your next question and make you feel stupid for asking it. It’s an art. 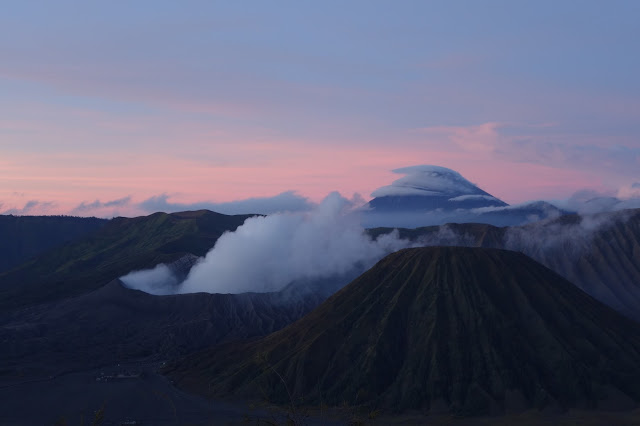 So there are 2 viewpoints. Viewpoint 1 took an hour on foot with a torch and apparently viewpoint 2 was another 45mins from there. We stopped at Viewpoint 1. And this is when it gets cold, like proper teeth-chattering, arse-biting cold. I have a feeling viewpoint 2 would have positioned Bromo against the sunrise backdrop better, but I got the colours I wanted. 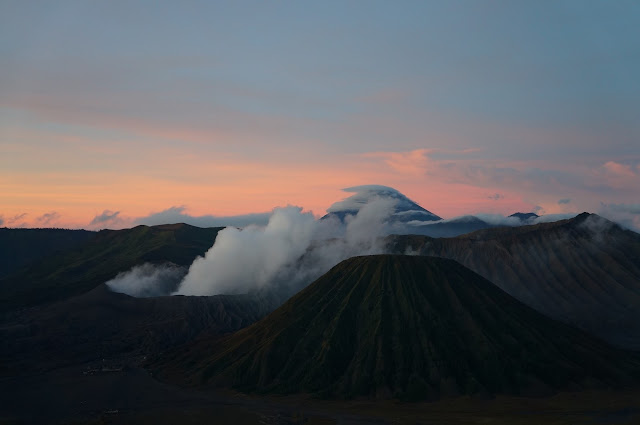 After breakfast we walked across the Sea of Sand and up Tenggar caldera. Most people joined a tour that would carry them across by jeep or motorbike, we walked from the hotel - there was a trail that didn’t really exist. Maybe we should have taken a photo of where we climbed down from the cliff… anyway, as long as you know the general direction is up on your way back. 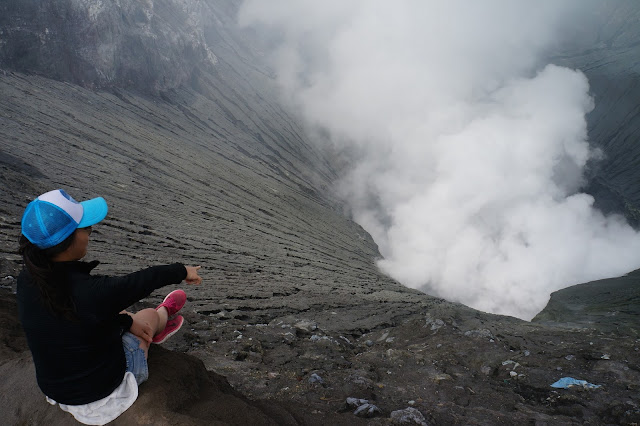 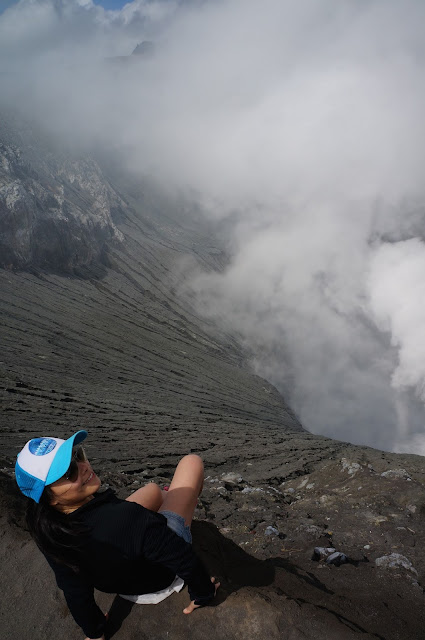 Our way back to Surabaya was… frustrating for one, entertaining for another. We got the minibus back down to Probolinggo, where we got scammed into paying double for a local bus; it stopped every 5mins, had no aircon, got swamped by local vendors and downright awful performers that tried to cause permanent damage to our eardrums - to say they were tuneless would be an insult to the word. He looked so angry; it was hilarious. Thankfully we found the right official Damri bus that took us to the airport from Purabaya, I don’t think he could tolerate getting scammed twice in a day. Hilarious.

Thank you. For being amazing in every way imaginable. I enjoyed every second.
at 09:54