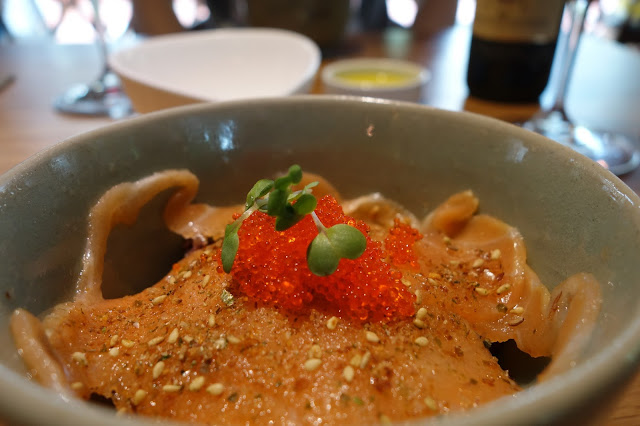 I was under immense pressure when he asked me to organize where to eat. I haven’t found a place in Singapore that I could swear by, and it’d be dull to go for regular European fare that he didn’t need to fly 12 hours for. Wild Rocket by Chef Willin Low aims to take apart traditional dishes, reassemble them and turn them on their head – we have a winner.

Sitting on Mount Emily, the restaurant is part of the Hangout Hotel on a quiet residential slope near Dhoby Ghaut. The dining room reminded me of a modern Japanese rock garden; the combination of its irregular wooden carapace and textured stone flooring gave it a good zen vibe. Perhaps too zen - that the staff ignored us for the first 30 minutes; no one greeted us at the reception until we waved, once seated and silently left with the menu, we weren’t offered water. The waitress actually looked our way a couple of times and decidedly blanked us. It’s true that we usually take ages reading the menu, but after an unshaded uphill walk on an empty stomach, some sort of acknowledgement of our existence would be nice. On the other hand, the couple next to us was offered cushions, water top-ups and showered with attention (yea ok the lady was pregnant, but I wasn’t wearing a DND sign).

After flagging down the waitress to take our order, I almost had to lasso her back for our wine order. In case you’re wondering, the restaurant was at 30% capacity, there really is no excuse for such appalling service. 10 minutes later we were informed our wine was no longer in stock – thanks. The server recommended an Italian – hell whatever, I’m exhausted. To be fair, the wine turned out to be quite good, light with a cherry tone that was not dissimilar to the Beaujolais we originally wanted, less acidic too. The man said it was served too warm – I would have loved to see him send it back to be honest.

We went for the Rocket Tasting Menu. 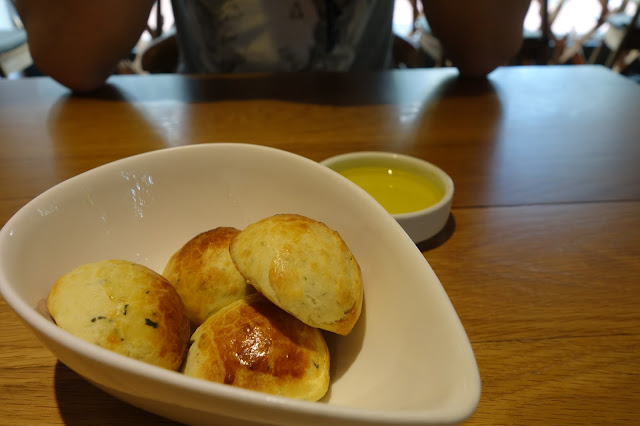 The warm small cheese bites were delicious; flakily soft and buttery on the outside, gooey and rich in the centre.

It would be fair to say this silenced my complaints about the service.

The mouth feel was fantastic as red rice has a harder shell that gave a more chewy texture, mingled with cubes of bouncy octopus, squidgy fungi and crunchy vegetables. The rice was cooked in a sweet soy sauce. The sweetness worked really well with the thin slices of salmon sashimi, which slowly dissolved in mouth to leave behind the delicate fish oil aroma. It was a delightful start to the meal. 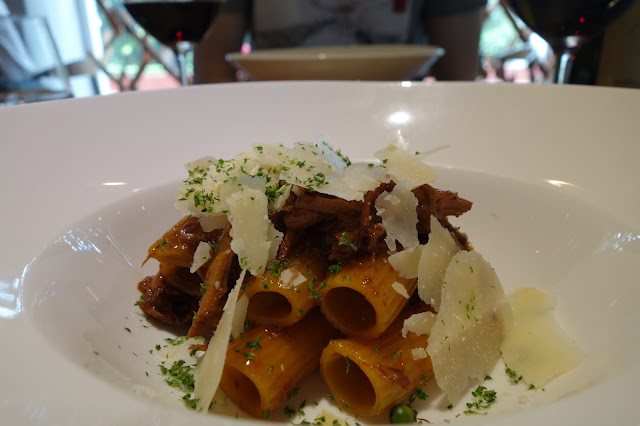 Tau Yew bah is an old-school Hokkien dish of braised pork belly in dark soy sauce. Chef westernized it into a pasta dish.

Personally I enjoyed the dish; the pasta was cooked al-dante, the soy sauce based pork belly ragu had a good consistency that flavoured the pasta without drowning, and the shavings of parmesan cheese helped to integrate the eastern influences with the western dish. He, on the other hand, was somewhat underwhelmed. He thought his pasta was overcooked and nothing particularly stood out with the meat sauce. I have always found him harder to please when it comes to pasta… At least one of us enjoyed it. 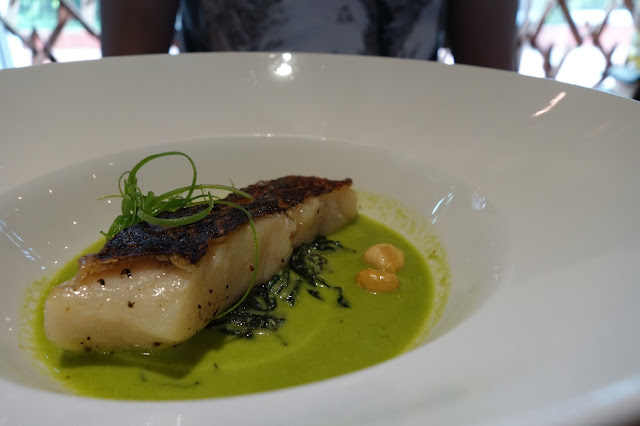 Marble goby is quite a common white fresh water fish in Asia. While it’s not as fleshy, the slithery texture reminds me of black halibut. Chinese cuisine prefer to steam fish to retain its natural flavors and succulence, with a healthy bunch of spring onions and gingers to rid any earthy, fishy tones. The kitchen put a twist on this with a spring onion puree, and the pan-fried fillet was soft and silky topped with a slightly charred skin. He approved.

That said it was probably too simplistic. There wasn’t enough going on to keep the dish exciting, it was fairly one-dimensional. 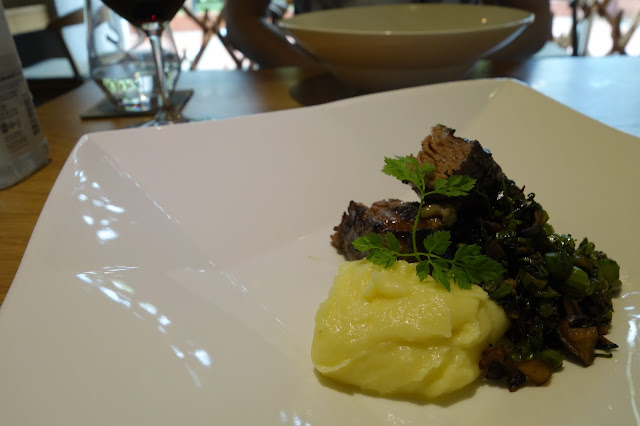 This was almost brilliant. The beef rib was cooked to utmost tenderness, so easily sliced through with gentle pressure from the knife. The traditional flavours came from the small pile of kalian and shiitake mushroom fusion, which reminded me of ‘mustard green’. We have it in Hong Kong as part of our typical breakfast, it’s preserved cabbage mixed with lean strips of pork loin, served on a small bowl of vermicelli alongside an omelette and toast. The savoury combination worked with the rib and brought out the beefiness. The only thing missing was  a jus or sauce to hold all the ingredients together, something light and clean would have done the job. 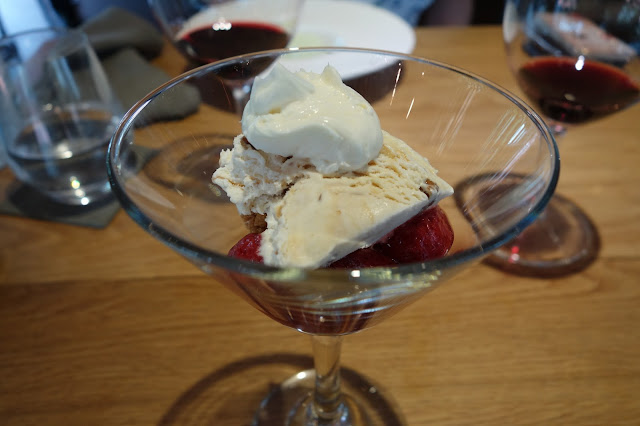 Not a bad deconstructed cheesecake, as with most things in Singapore, it was very sweet. 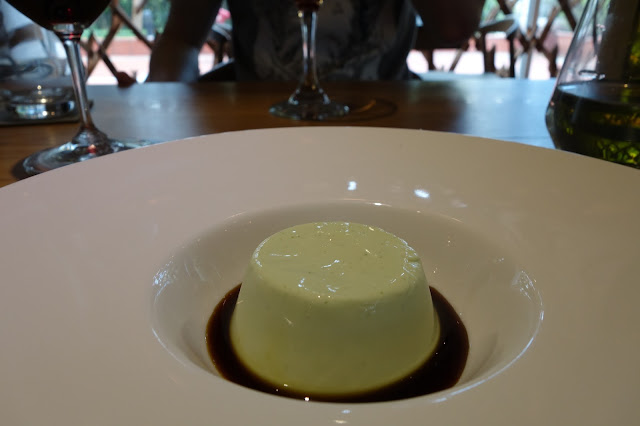 Nothing spectacular. The salted palm sugar sauce was a tad too strong and killed the delicate pandan fragrance, though it wasn’t criminal.

I quite liked Wild Rocket, Chef did well with some of the dishes, my highlight being the salmon rice. There is room for improvement, nonetheless, perhaps around bringing more sophistication and finesse to the dishes. I think it’s all on the right track, but needs more work to bring it up to the standard we’re used to - notwithstanding the service, that needs serious re-work.

I wasn’t sure what to expect when a restaurant claims to serve Modern Singaporean food. I guess I’m still not entirely sure what Singaporean food really is. Perhaps it's a broad term that includes a range of South East Asian cuisine. It's still early days I suppose, I'm still hoping to get bowled over.