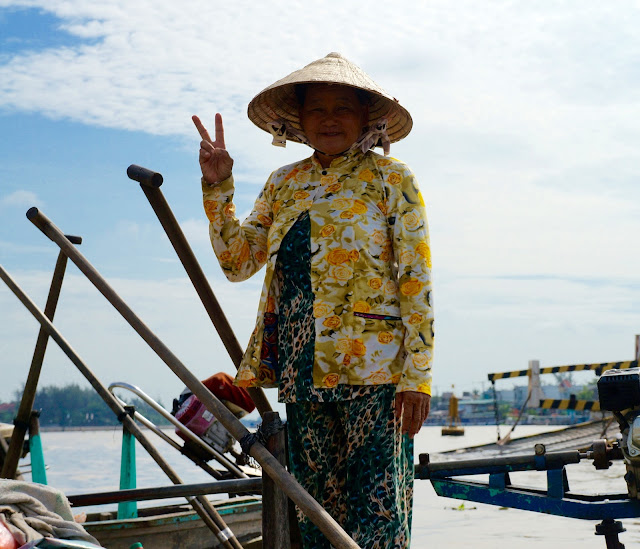 I am late to Vietnam. Should have came here 10 years ago, just somehow kept pushing it back when I was London-based. Now I’m only a short flight away, I am splitting the long country into extended weekend trips so I could save travel time. The first part is Ho Chi Minh City, apparently it's still more commonly referred to as Saigon. General consensus was that South Vietnam is not as exciting as the North, good place to start then. 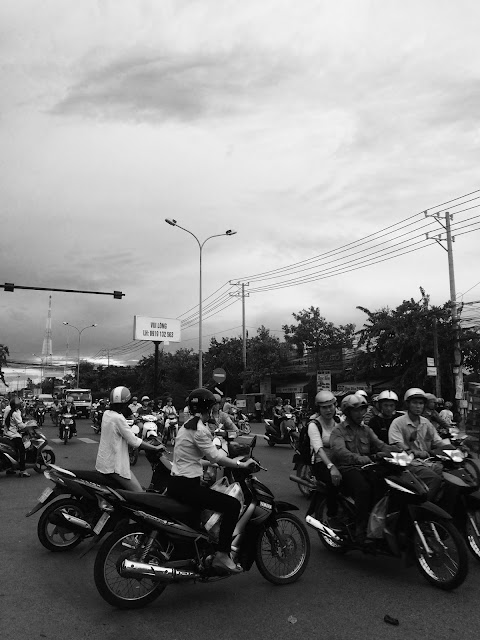 HCMC is the largest city in the country, and I am not a city girl. So I only planned one day in the city with the foodie tour to cover key areas, then one day in Can Tho plus one day to the Cu Chi Tunnels. 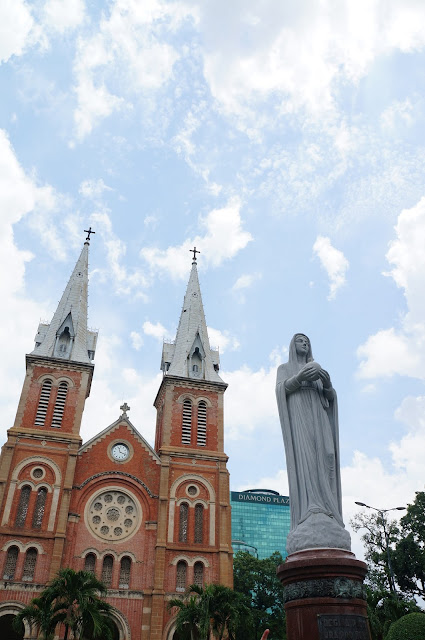 We took bus 152 outside Burger King at the airport to the city centre, about 30mins at 5,000 dong pax (+5,000 for luggage - loose term considering Papa Chan only had a rucksack). We were staying at EdenStar hotel and the bus stopped c.50m from it. Since I wanted to catch the bus to Can Tho on day 1 in the afternoon, we strolled around district 1 in Saigon in the morning, leisurely hitting the main sights of Reunification Palace, Notre Dame, the central post office before circling back to the Ben Thanh Market via War Remnants Museum.

For lunch, we made our first pho stop at Pho Le on Vo Van Tan. 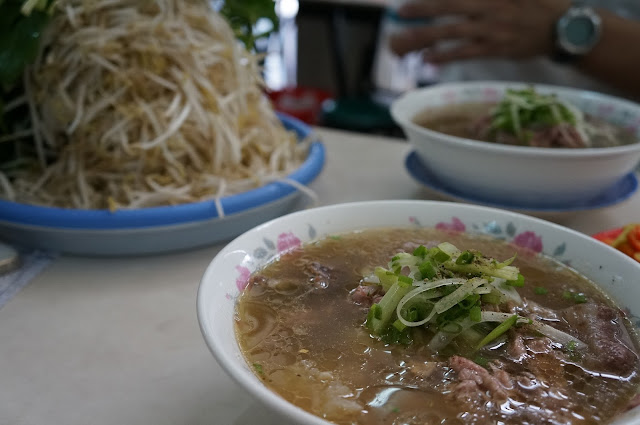 (At this point I didn’t know ‘pho’ was a North Vietnam thing)
Papa Chan was loving the mountain of beansprouts and fresh herbs on the table. I went for rare beef slices, brisket and tendons; Papa Chan added beef balls as extra. The broth was epic, though on the greasy side, it was packed with beefy goodness. We decided this was the best pho we had on this trip.

Then we made our way to Thanh Buoi bus office on Le Hong Phong street in District 10, which had a shuttle bus that took us to Ben Xe Mien Tay in the west of HCMC (115,000 dong per pax). A very comfortable 3hr ride plus a 10min break. The bus stops on the outskirt of Can Tho city. We could have taken the shuttle bus that took us to the hotel, but we were drawn to the line of food stalls and after sitting for 3 hours, we were up for a stroll.

On our way into the city centre, we passed this hole-in-wall noodle stall with lots of locals. It wasn’t pho as the noodles were thin, but the texture was smoother and bouncier than vermicelli. The broth was clear with a thin layer of grease, it had much depth and flavour; the ruby hue came from tomato, not chillies. 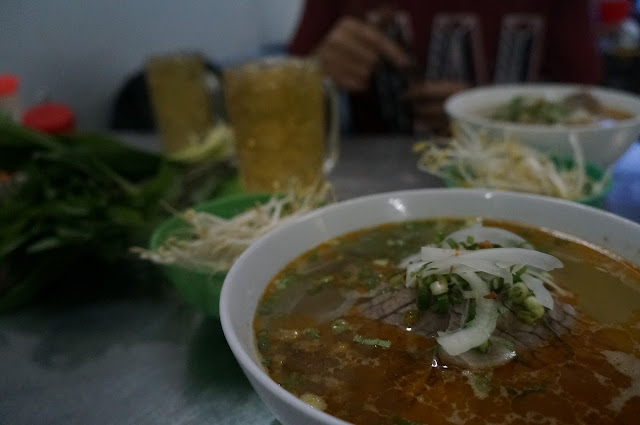 By the time we finished strolling along the pier, it was getting late. We made our way to the hotpot valley near the university area, but stalls were already packing up. Instead we sampled the street food carts lined along the river. This Banh Trang was delicious. The dried rice paper was roasted to ultra crispiness over coal, topped with mince, herbs, spring onion, chilli sauce and mayo, folded together like a thin calzone. We also tried some glutinous rice with bits and bobs and some skewers. 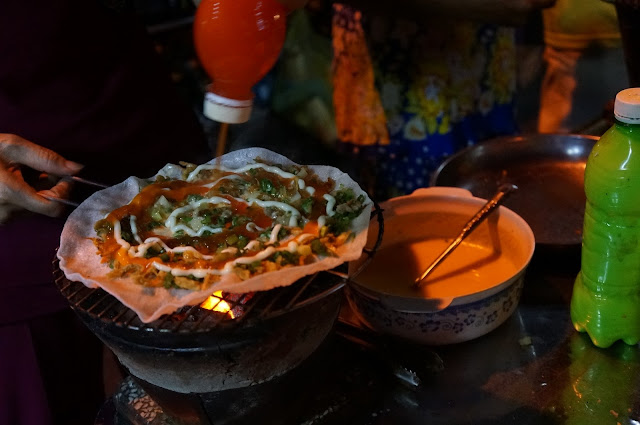 The next morning was an early start. The Cai Rang floating market starts at dawn and wraps up around 10am. We walked to the pier around 6am and rent a small boat at 300,000 dong. 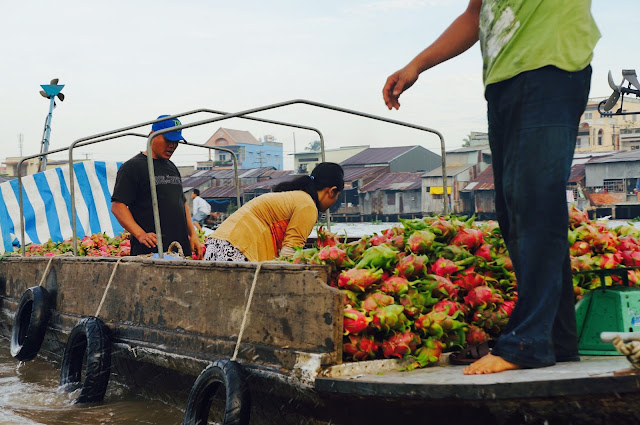 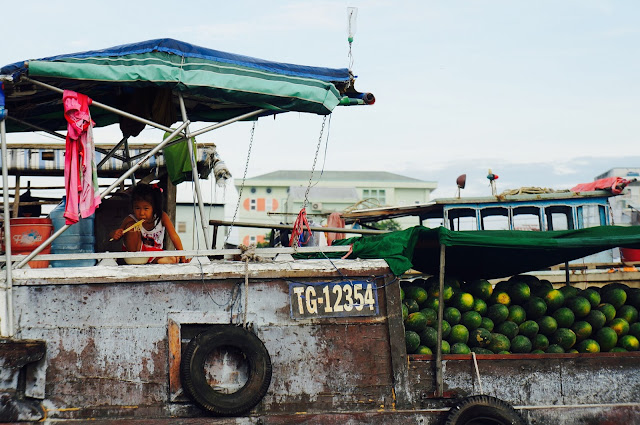 The boat owner also took us to a rice noodle factory where we were shown how the noodles were hand-made. I have no idea what these are called, the transparent noodles were thinner than pho, much more chewy with a playful mouthfeel and even smoother. We decided these were the best type of noodles out of the 4 we had. The lean slices of pork weren’t as good as beef, but the broth was crystal clear. We couldn’t work out where the all the meaty flavours were coming from! I could have this breakfast everyday… 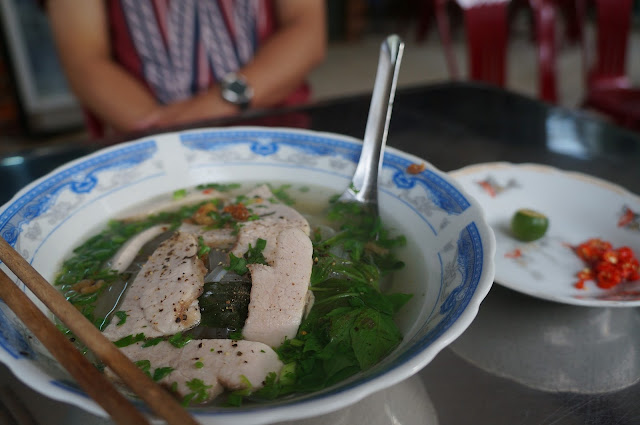 After the 3-hr tour, we returned to the hotel for 2nd round of breakfast before heading back to HCMC. We had a quick bun bo hue with added gio lua, a type of wrapped sausage meat. Compared to the other types of rice noodles, this was relatively dull. 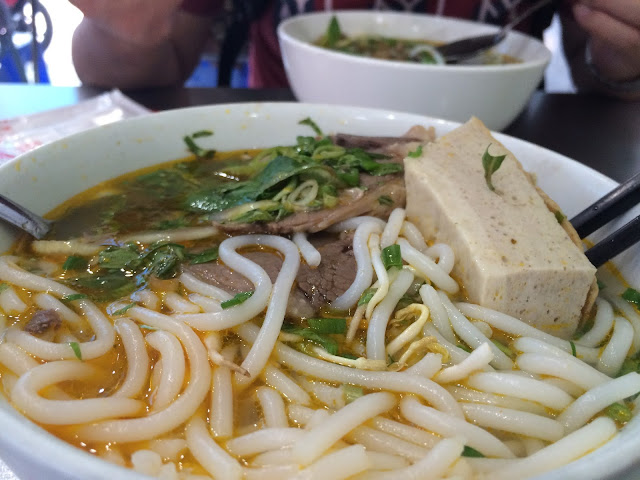 Dinner was taken care of by the Foodie Tour with Saigon on Bikes. Absolutely brilliant.

On our last day, we took a day trip to Cu Chi Tunnels. I wanted to go to Ben Duoc as opposed to Ben Dinh, where most organised tours visit. I heard Ben Dinh was never part of the 280km underground tunnel network. It was later developed with wider tunnels to cater for western tourists. 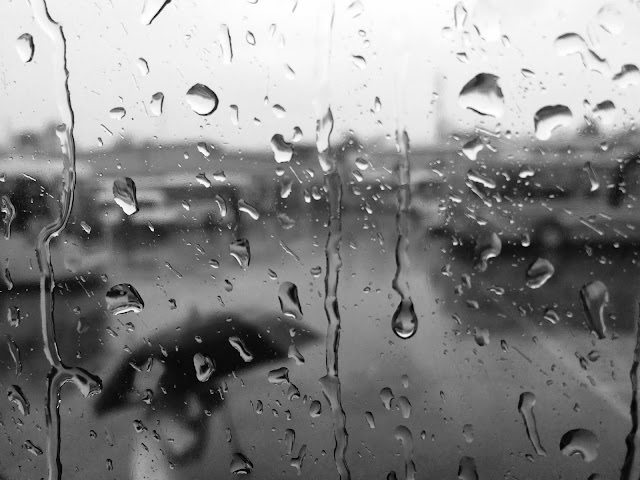 It wasn’t that difficult to get to Ben Duoc by public transport. It helped that I was starting to decipher Vietnamese, so the squiggles on buses were no longer alien to me. It didn’t help that it was pouring down - I mean torrential rain all morning. Took Bus 13 from Pham Ngu Lao 23/9 park, all the way to Cu Chi Bus terminal, approx 90mins 6000 dong. From there switched to bus 79 for another 45mins 5000 dong and we were at the park entrance for Ben Duoc. Ta-da! 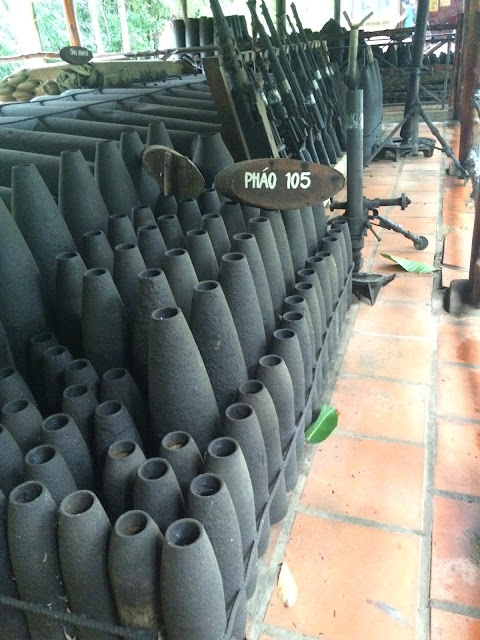 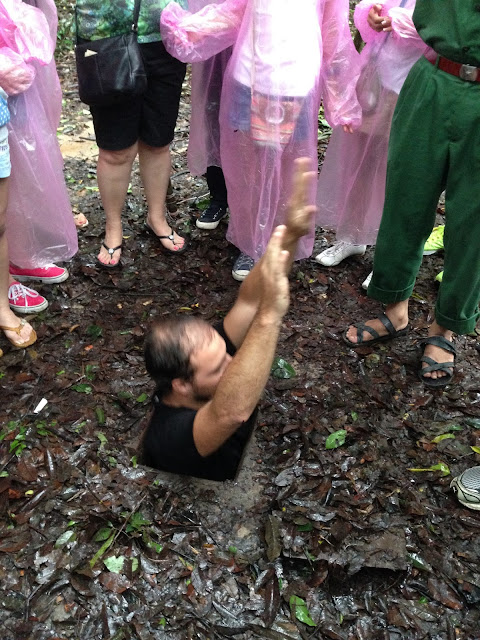 A tour guide was included in the 90,000 dong entrance fee. He explained how the tunnels worked and guided us through different sections of the tunnel. The entrances to the tunnels were well disguised and minuscule. Papa Chan panicked slightly after a while as the air got a bit thin underground, and the odd bat didn’t help. He loved the experience though:)

Before leaving for the airport, we stopped at the much reviewed Pho Thanh Canh near the backpacker street for their Pho Bo. Seriously overrated - mediocre broth, gristly lean beef, small serving of noodles and stingy herbs / beansprouts, not to mention inflated prices. 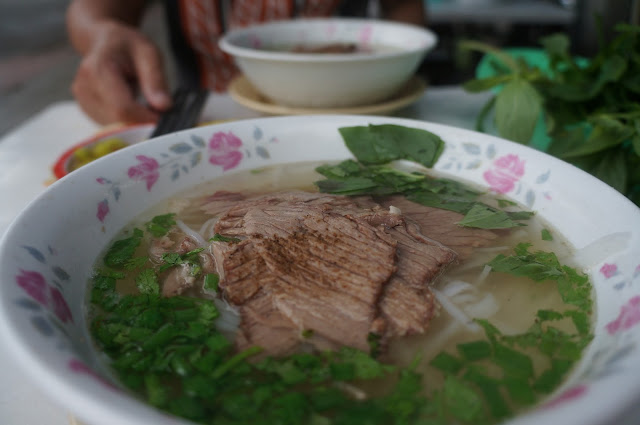 Not wanting to leave Saigon with a sour taste in my mouth, I headed to Huynh Hoa for a Banh Mi. And you know it’s good stuff when the place is surrounded by locals plus rings of scooters getting dangerously close to queue. 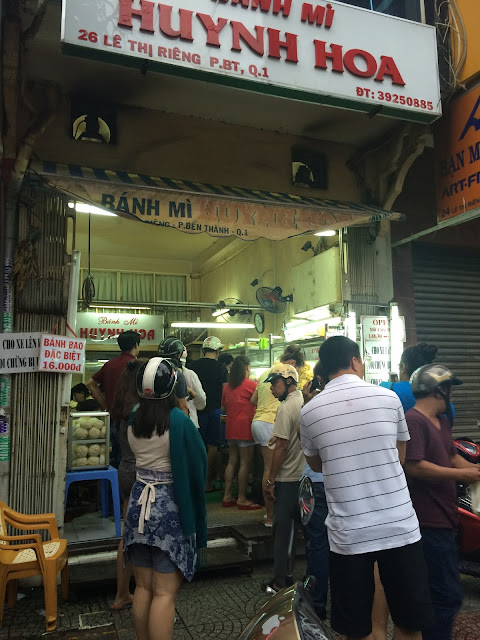 I wish I could tell you everything that was packed into the baguette… but first the lady was operating at the speed of light, I mean she was churning out over 30 banh mi per minute - I timed her. Secondly the sandwich was stuffed with A LOT of things - a few types of meat, a few pickles, some vegetable, definitely identified some cucumber and carrots, pork floss, maybe some beancurd skin.. I don’t know. All that mattered was: it was freaking delicious. 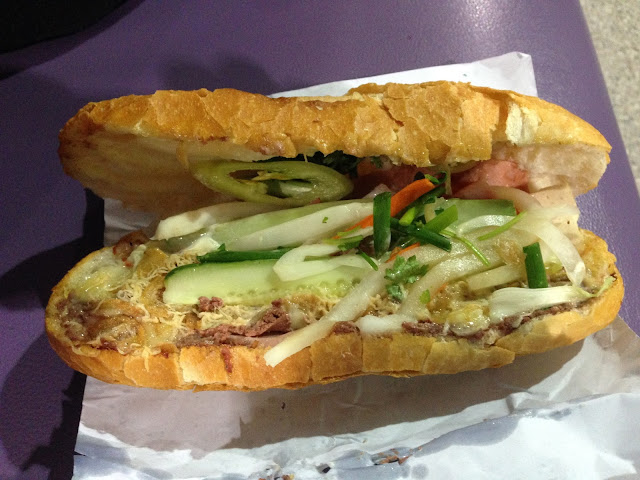 Though most people found Saigon less exciting than the North; I really enjoyed my 3 days here. Well, technically I didn’t spend that much time in the city. Perhaps I had relatively low expectations. Hanoi and Sapa in a couple of weeks - we’ll see.
at 02:53