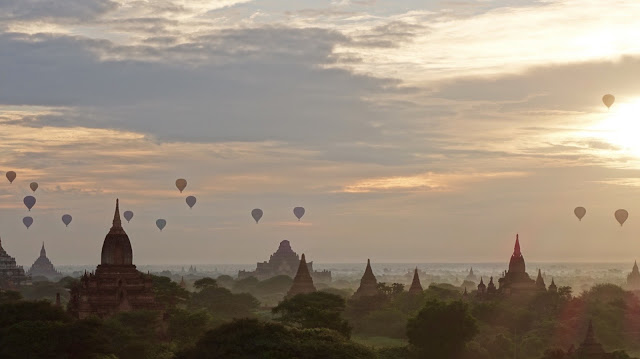 The bus arrived at Bagan Shwe Pyi Bus Terminal around 5am, and we were met by a wave of taxi drivers. We were staying at Zfreeti Hotel in Nyaung-U, which was a small town to the east of Old Bagan. The taxi ride was 12,000 kyat and there wasn’t much room for negotiation. There was also a $20pp tax to enter the Bagan Archeological zone. 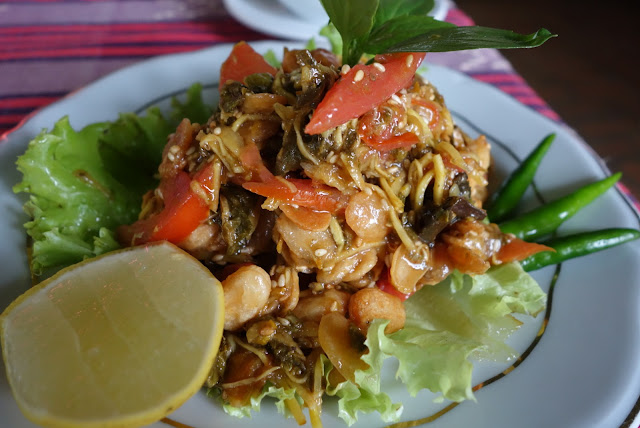 The tea leaf salad was interesting with soft pickled tea leaves, roasted peanuts, toasted beans, sesame seed, crispy garlic and chopped tomato. The dressing was savoury and tangy, made with fish sauce and lime juice. I quite liked it. The curry was a bit… meh.

I was introduced to e-bikes and they are fantastic. The throttle made uphill cycling so effortless but I still got the thrills from riding - it just moves faster! I might have landed on my bum once coz the bike was quite heavy… We started off with a smaller temple, where a local came to unlock the gates and gave us a mini tour of the inside. 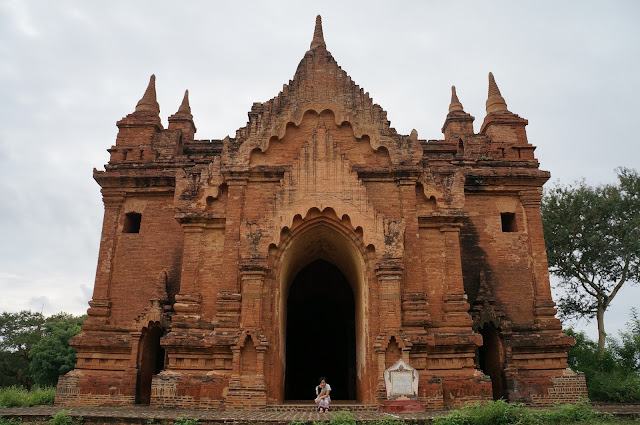 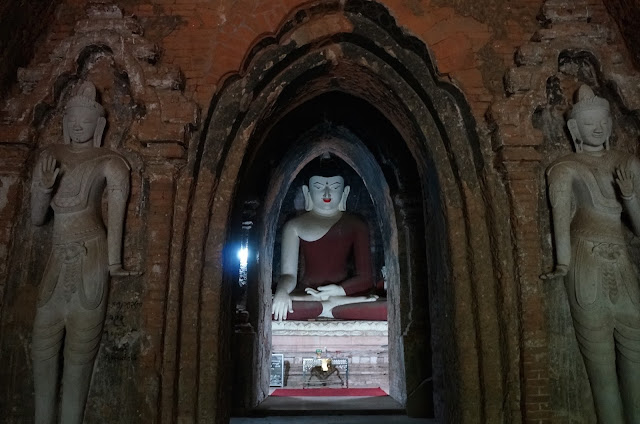 We continued to explore at our own pace, making our way around pagodas, stopping at whatever caught our eye, climbing stupas, taking in panoramas, roaming free. 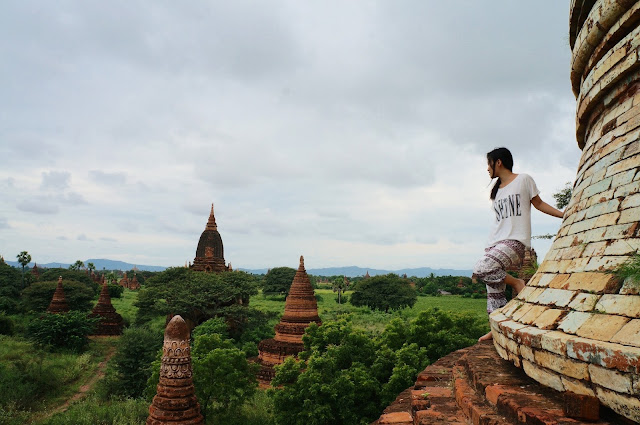 We stopped at the Alodawpyi Pagoda, and enjoyed a quiet view of the plains on the unassuming brick structure behind the golden stupa, followed by Ananda Temple. 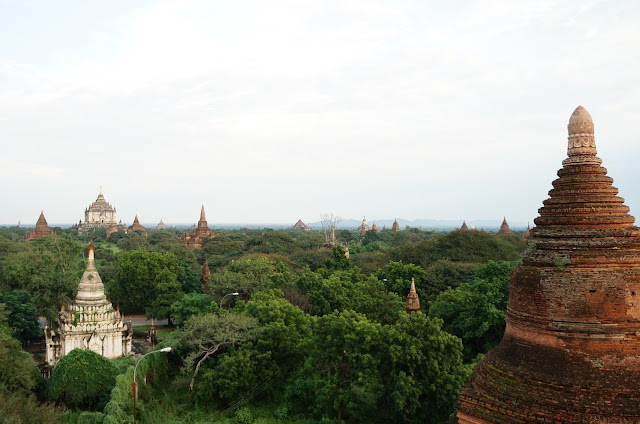 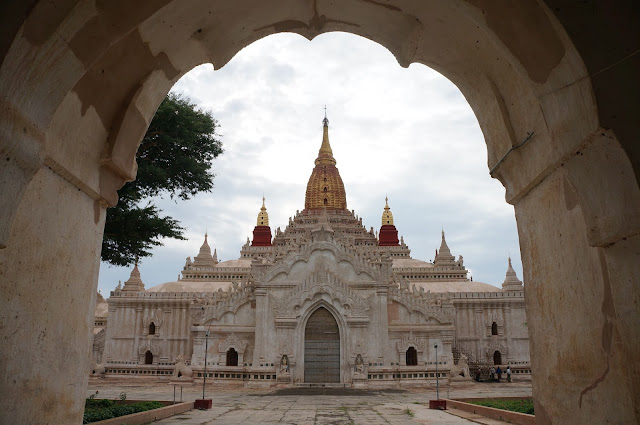 Thanks to Lonely Planet and TripAdvisor, there are about 4 “Be Kind to Animals” vegetarian restaurants near the gate to Old Bagan. We went to The Moon, which also claimed to be the original. The servers here look about 18, but they all sounded like American war veterans; they spoke with a husky tone, heavy American accent and ended every sentence with ‘sir!’. We had the coconut milk curry and aubergine curry, both excellent, possibly the best meal we had in Bagan. 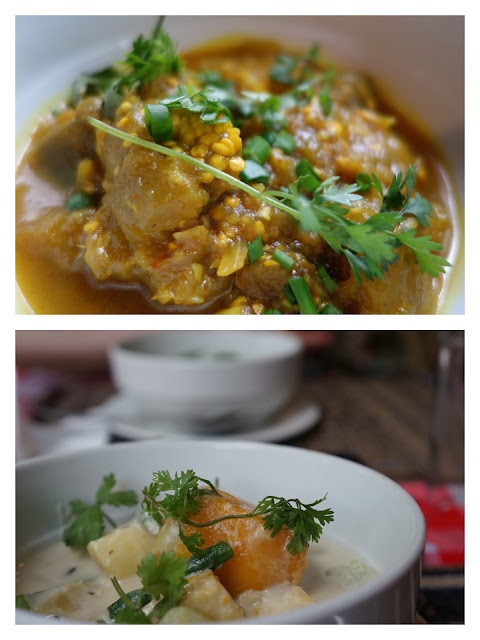 After Maha Bodhi Phaya, a local led us to and showed us the dark hidden stairs up to watch sunset. From there we could see Shwegu Gyi Phaya, Thatbyinnyu and the rather ugly archaeological museum. 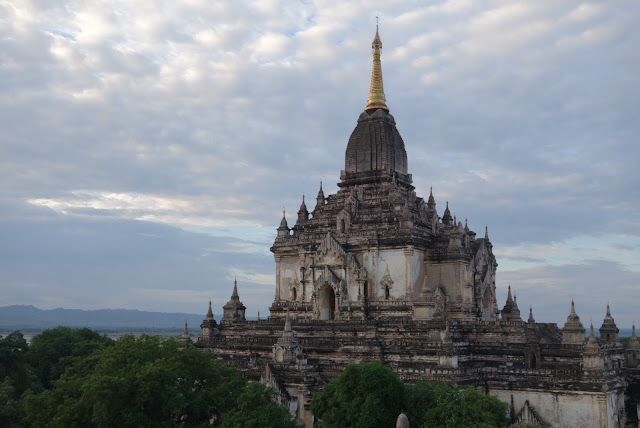 The next day we rose early for sunrise. Our hotel said Shwesandaw is a popular spot, and we were lucky that by ‘crowded’, there were only 20 of us. It was fairly cloudy but some light came through and it was still quite spectacular when the hot air balloons began floating across the plains. We weren’t hot for forking out 350USD each for the balloon ride, apparently plenty of people were and it often gets booked out.

After breakfast and a quick nap, we set out for our second day towards Minnanthu with our e-bikes. The road was clearly marked on the map and the hotel said the route was do-able with our e-bikes. Umm… perhaps the hotel was too optimistic with the bikes, the ‘road’ was merely a muddy track where even scooters had trouble navigating. About 45mins in, the track sort of disappeared and led us to a field with two huge cows. The good bit was that he had a compass, can read a map and managed to lead us through some deserted temples back to the road. The less positive bit was that we had to ruin a man’s field (twice, possibly the same man), it was a scaldingly hot day to push our bikes, I was feeding every bug within the mile and getting scratched by every plant. 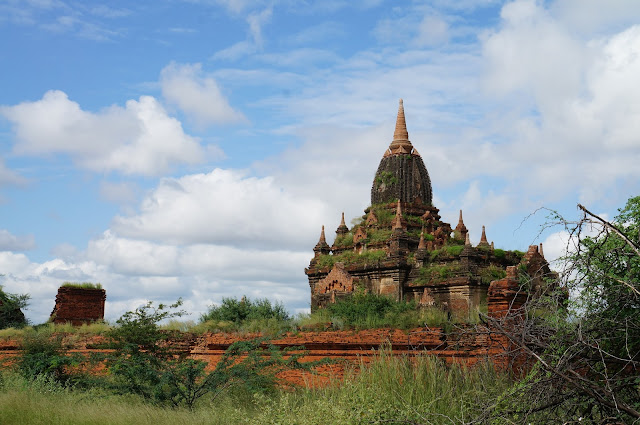 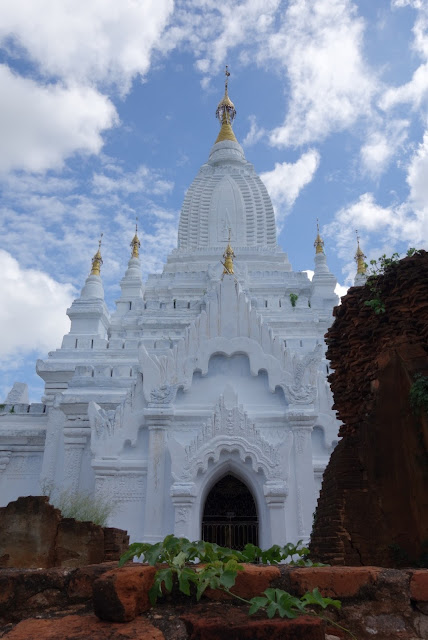 Ah well, once we found the pristinely white temple, we got back onto the real road and made a few more stops, including the Dhammayazika. A coach-full of monks also visited at the same time, with their sunnies and smartphones:) 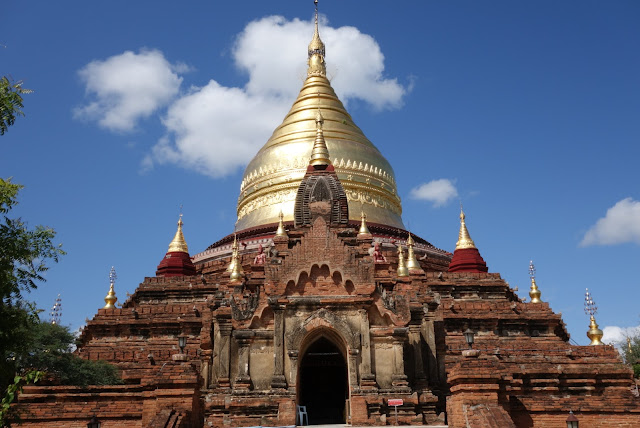 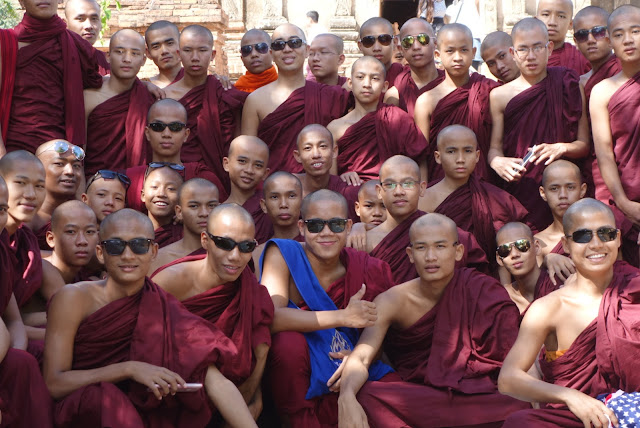 We stopped at New Bagan for lunch before heading back to Old Bagan to finish what we had missed the day before. There was a lot of development happening in New Bagan, with plenty of small hotels and hostels popping up. That’s probably why I prefer the quieter Nyaung-U. The tourist info centre was just as useful as our hotel reception desk. 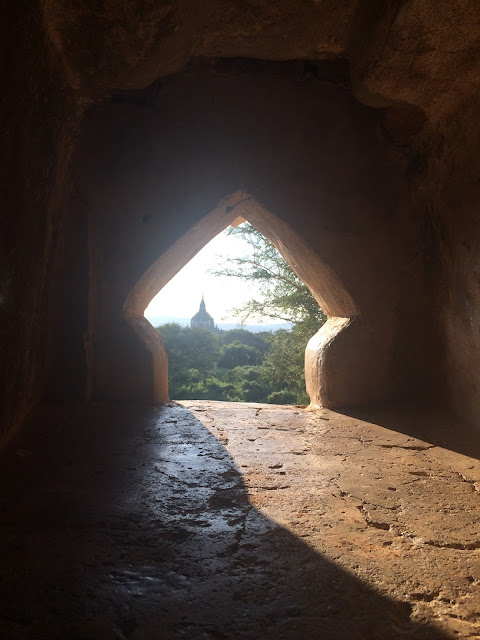 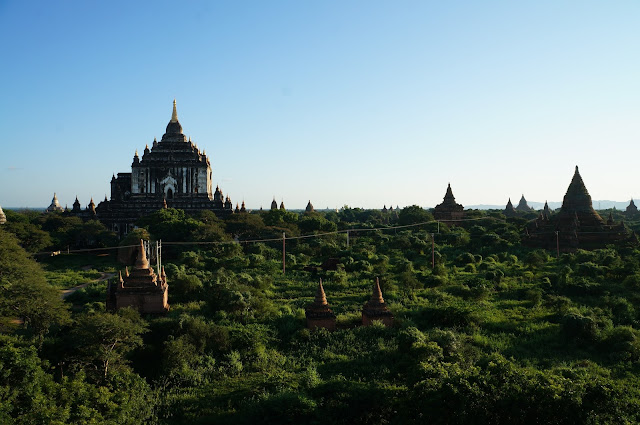 I think he felt obliged to visit the Bagan Museum… we might have spent 15mins in there... the early start of the day was starting to catch up with him. We climbed another temple as the sun began to set. He is absolutely brilliant with the technicalities on his camera, just despairingly hopeless when it comes to framing:) After a quick walkaround Bu Paya, the golden Humpty Dumpty, we made a quick stop at the Moon again, where Colonel No.2 served up some homemade banana ice cream and papaya lassi, a much needed sugar boost. 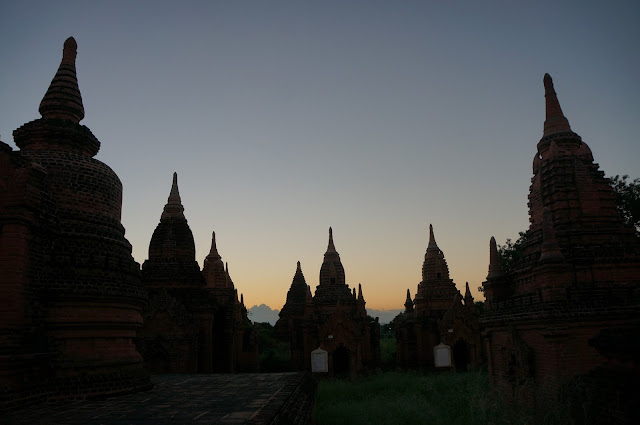 The next day we arranged a half-day trip to Mount Popa. Well, it’s actually called Taung Kalat where the monastery sits on top of the volcanic plug. After a 2-hour drive, we climbed 777 steps to reach the top. Perhaps we were templed-out, perhaps I was hating every minute with the monkeys running wild, perhaps it was the heat from the climbing, it was a bit meh. Thankfully we had the rest of the day free to chill, arrange our next stop and buy new pants:) 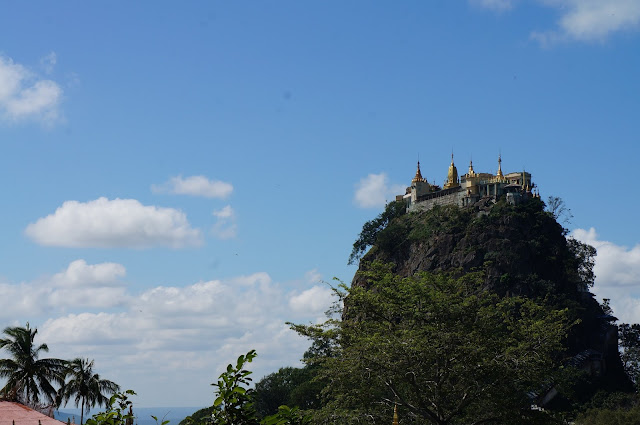 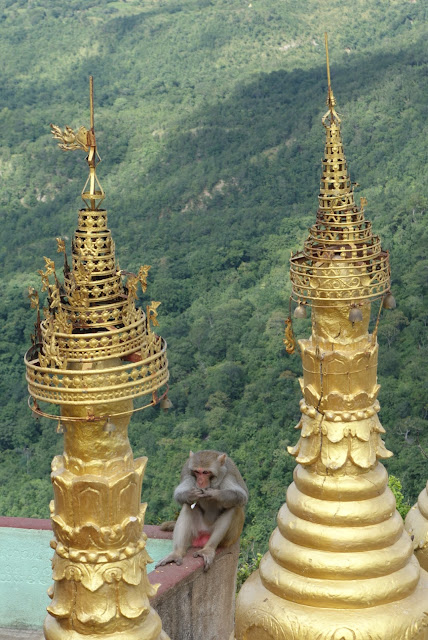 We weren’t overly impressed by the restaurants in Bagan, most meals were a blur of poor Thai and Myanmar curries or stir fried noodles, washed down with Myanmar beers. Black Bamboo in Nyaung-U served the best dinner with a fair wine selection in a beautiful garden, though it was 30% pricier than the main strip. We also enjoyed ma-la fish, which was a whole fish grilled with peppers and chillies, not dissimilar to sichuan cuisine. Finally the ‘best burger in Asia’ by Weatherspoon did not disappoint despite my scepticism. The beast was packed with avocado, crispy bacon, a juicy patty, melted cheese and fresh salads; I can’t confirm if it was the best in Asia, but it beats the ones I have had in Singapore so far! 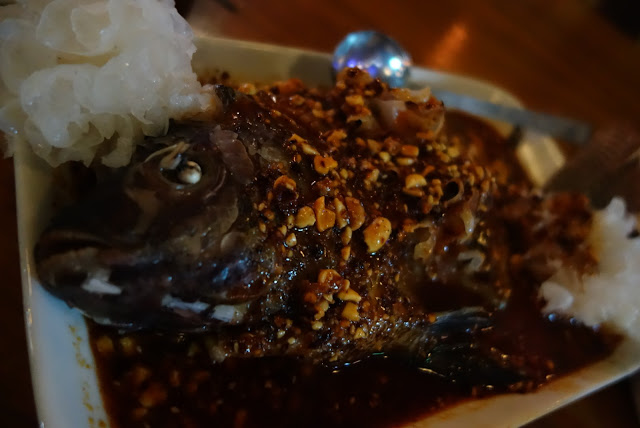 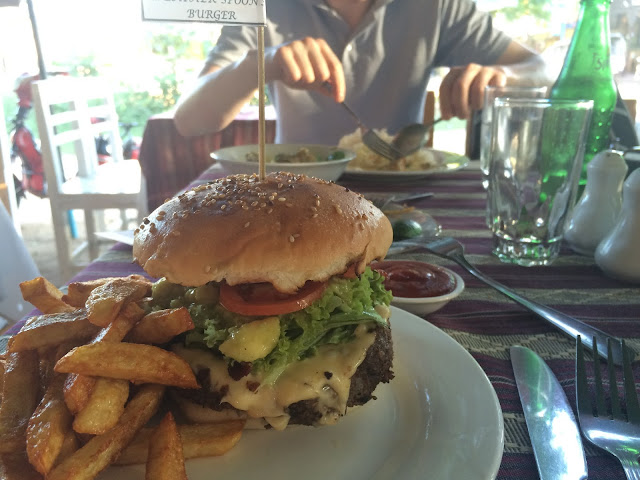 We had a few options for the next few days. Inle Lake was ruled out quite quickly, mixed reviews plus the idea of being on a touristy lake with lots of mosquitos gave me the shivers, or the itch. Some may say I have missed out. We contemplated Monywa but trying to book last-minute accommodation was proving difficult, not to mention wikitravel’s “buy” section only mentioned mosquito repellent. In the end we decided on Mandalay and perhaps do day-trips to Monywa later if we fancied it.

The boat from Bagan to Mandalay takes 11 hours, daily departure for the tourist ferry and costs 38,000 kyat pp. The local boat leaves twice a week and it takes 14 hours. It was a very easy ‘No’ - we went for the minibus, 5 hours - 10,000pp with door-to-door delivery. I'd say bring some snacks for the bus ride, it was pretty much non-stop and options were limited at the bus stop.