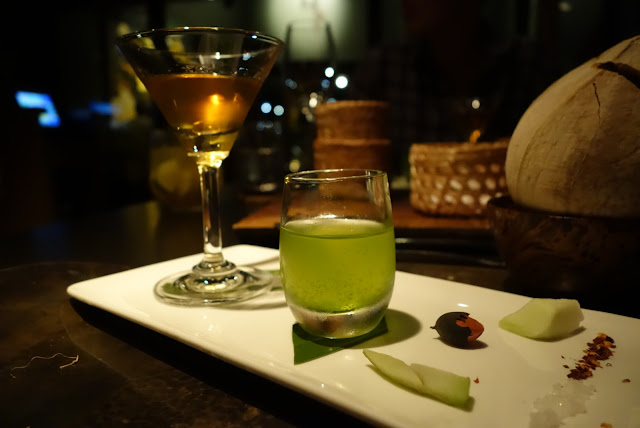 The highest ranking Asia's Top Restaurants is in Bangkok... serving Indian food. I’ll save that for next time. It’s been 10 years since I last visited Bangkok, Skytrain was only a vague idea back then. I decided we should stick to Thai cuisine, so I chose Bo.lan from the Asia's Top list and made a reservation a month early. As well as this being our first (hopefully) quality meal since Myanmar, it’s also a belated birthday treat - it calls for fine dining.

It was raining on the night so we didn’t see the garden properly, but we gathered it would be nice to sit outside for lunch. 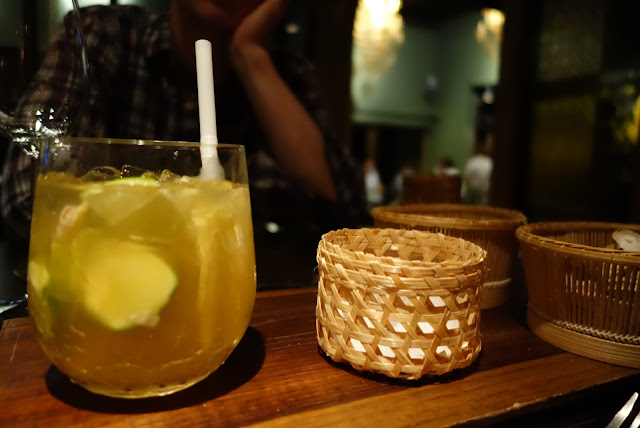 We were served a mildly sweet barley drink and three small baskets of nibbles: toasted rice, caramelised cashews and roasted monkey nuts, which were boiled to give a soggy and mushy texture. We didn’t have to ponder over the menu for too long, as there were only two to choose from: the more elaborate Bo.lan Balance or the simplified Bo.lan Brief. After 10 days of very average meals in Myanmar, the full menu sounds about right. We started with a signature cocktail, which was strong but refreshing, and a roasted coconut juice.

Our waitress gave us the option of Thai Spicy, Thai Medium or Not Spicy. Knowing my limits I went for medium; he Thai Spicy. 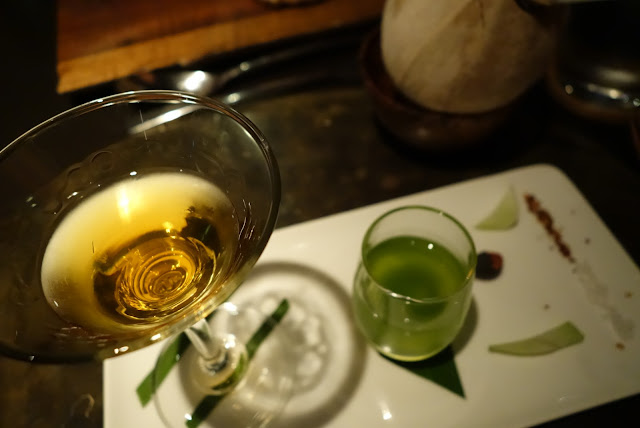 I had no idea what the menu was describing. I still have no idea what it was. I think the shot in the cocktail glass was Mekong whiskey, I can only guess because I didn’t want our waitress to repeat herself for the fourth time. It was strong, like nose-scrunching, eyebrows-crookingly strong, leaving a glowing warm fuzzy feeling in the stomach. Perhaps the plan was to get the diners drunk upfront… The shot was followed by a pandan water cleanser to wash away remaining bitterness. That titbit of green sour fruit, dipped in chilli flakes and sea salt, was true to its name, its acidity pierced through like it had been soaking in vinegar since the beginning of time, cutting through the battle between salt and chillies. The something berry was also terrifyingly sour…

I can’t pretend I enjoyed this platter of chaos, but it definitely woke all my tastebuds. 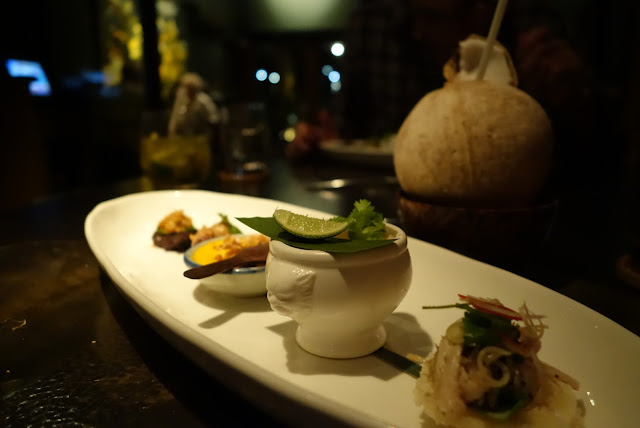 The ensemble of 5 canapes was simply delightful. From the fragrant, chewy black glutinous rice to the lemongrass chicken rice-cracker, each one was bursting with distinctive and delicate flavours, carefully constructed so that textures complimented each other. My favourite was the savoury egg pudding that was velvety smooth and lusciously rich. 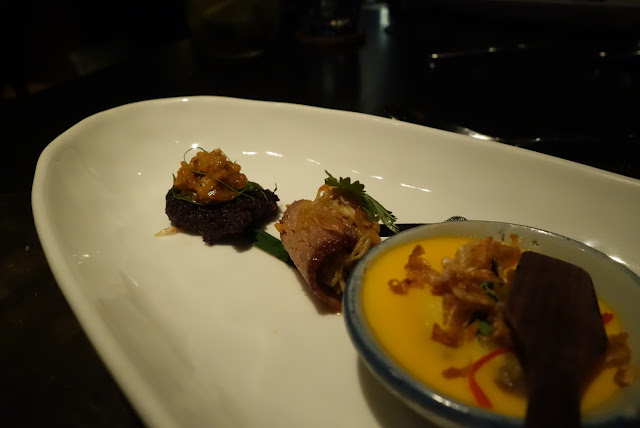 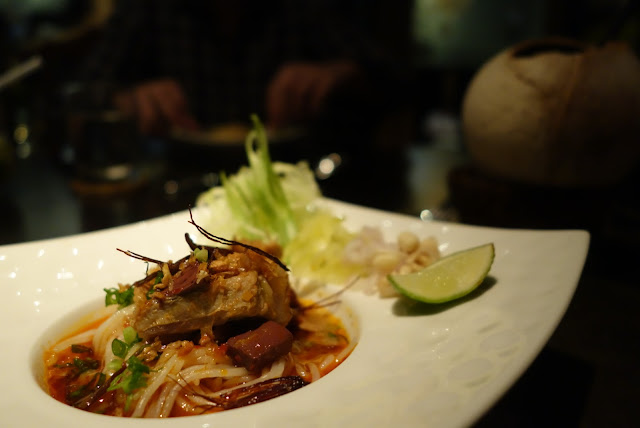 It was almost 90mins in and we were still on our starter; our neighbours were rounding off their mains. It was a thick vermicelli with tender slabs of pork and small cubes of pig’s blood jelly. The noodles were full of bounce and coated with the mildly spicy dressing, made interesting by the array of herbs. The Thai spicy version had more chopped chillies. I have noticed that local dishes here throw a lot of pig offals in the mix; I used to like offals when I was young, until I watched a documentary a slaughter house in China. These should be fine. 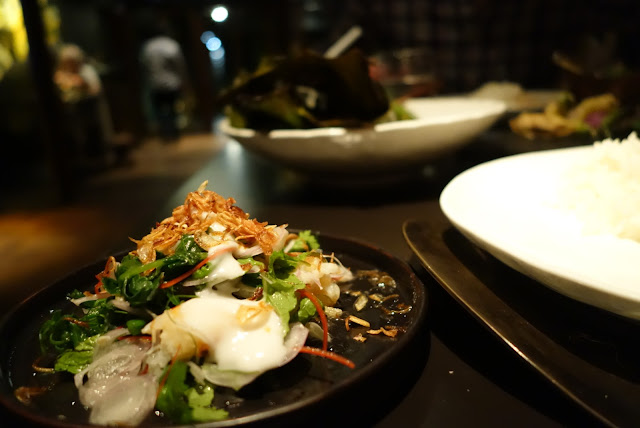 It was a very crunchy salad with slices of fresh, bouncy prawns and plenty of herbs. The shrimp paste wasn’t as pungent as expected, it carried a distinctive fragrance from the fermented shellfish, toned down by the dollop of coconut cream. Mine was perfect, his had an edge with an extra handful of chillies, it felt like my throat was getting scratched by the devil’s trident.

The remainder of the mains were served for sharing 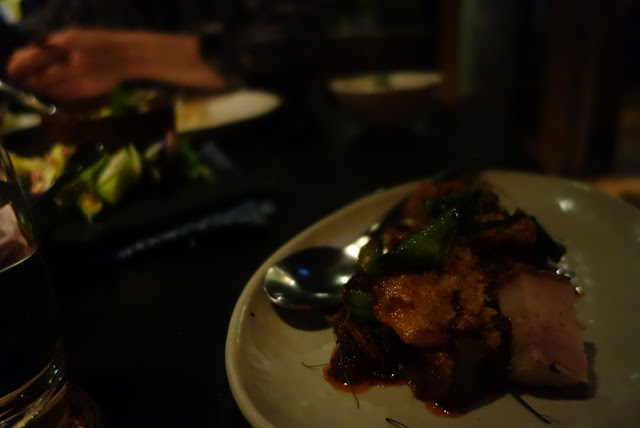 We were served two different pork dishes; I had given up on matching the dishes with the menu. This one reminded me of double-cooked pork in sichuan cuisine. The thick slices of pork belly and loin slices were stir-fried with a thick chilli paste and snake beans. The heat was sharp and forceful at first, then left a tingling feeling on the tastebuds. It was pleasantly different to the coconut-based sauces. 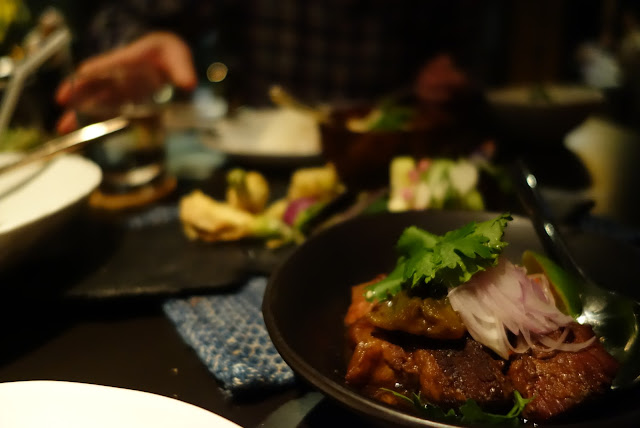 This was the other pork dish with leaner cuts… Other than the meat being fairly chewy, I don’t remember too much of this… I’m guessing it was okay. 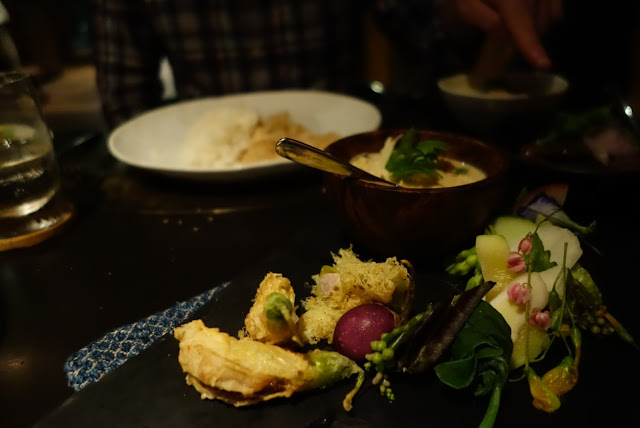 I don’t recall any chicken in this dish but by process of elimination this had to be it. The coconut cream curry was buttery and full of mild spices, we were told to dip the chilli tempura and pickled vegetables on the side into the cream. The tempura have a fluffy coat of birds-nest batter that soaked up the curry, making it a very juicy bite. 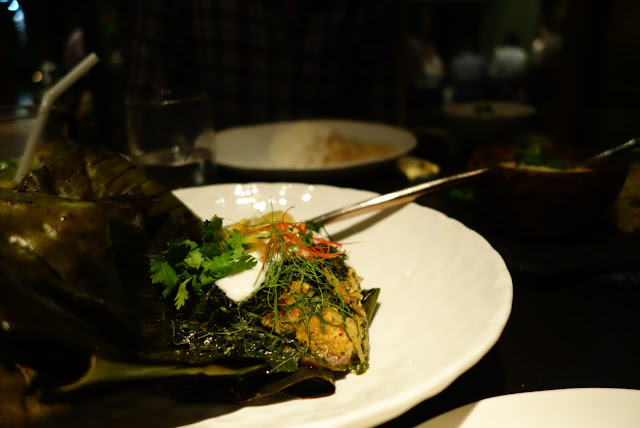 The hunk of beef was reduced to dense mass of shredded meat with a generous spice rub. The beef wasn’t as soft and succulent as I anticipated, the meat was very lean as there wasn’t much juice; it was still quite good. What I really enjoyed were the ribbons of this unknown green veg. It was not dissimilar to seaweed in terms of texture, but the slithery strings  absorbed the herbs and fragrance from the leaf - delish!

Coconut based soup of sustainable seafood with a hint of turmeric 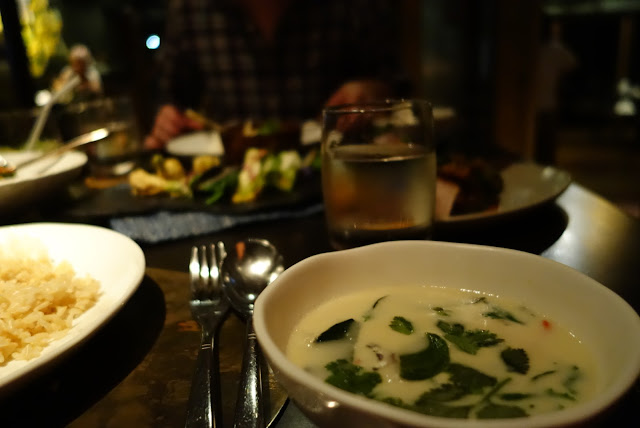 The soup was good, though I didn’t have much space left after two helpings of rice. The brown rice was particularly good, slightly sticky with more chew. 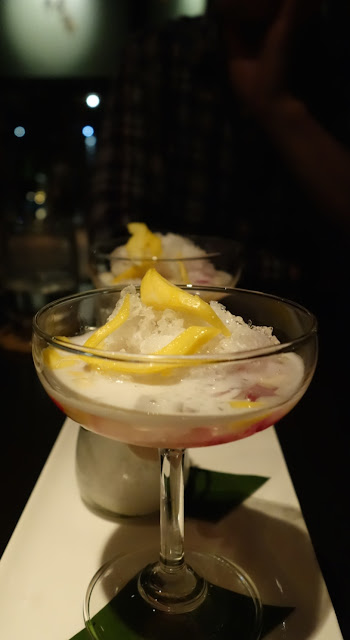 Our desserts were served with hot lemongrass and ginger tea 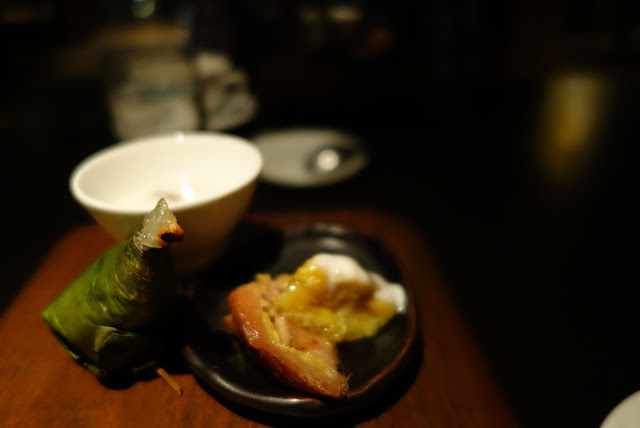 The four ways included mashed banana in coconut milk, sticky rice with banana, grilled banana and banana with coconut milk. I enjoyed it; he wasn’t a fan. 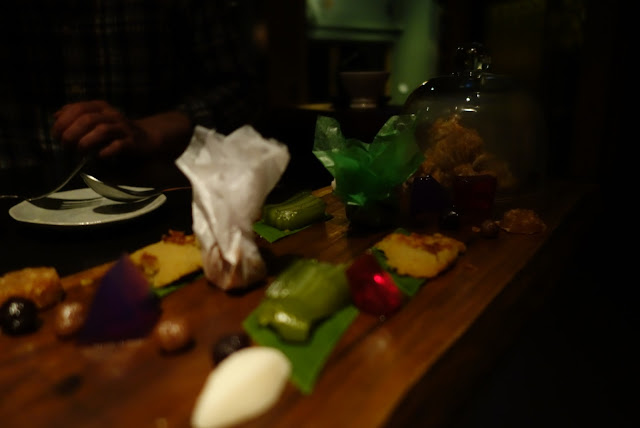 Our waitress lit a twig of pine wood and trapped it under a bell jar with the peanut brittle. The brittle absorbed the smoky aroma; it was quite christmassy. The rest of the board was much less exciting, a variation of very sweet palm sugar sweets and stiff jellies. Safe to say we prefer western-style petits fours.

We enjoyed Bo.lan; cooking was exceptional, showing off the broad range of Thai dishes beyond the usuals. Every course was beautifully prepared and presented (after the sour fruit attack), not to mention plentiful. The option to choose the level of spiciness was a bonus. Service was exceptional. As usual we took our time over dinner and the waitresses were great to accommodate our pace. The couple next door was already on their petits fours when we were half way through our mains, and they sat down half an hour after we did. I thought the dining room was quite chilly towards the end of the evening, our waitress unwrapped a new shawl so I could cover my shoulders. This somewhat supersedes them only semi-passing the napkin test.

Another great meal to remember.

You may also like: Burnts End, Les Amis, Iggy's