Paradise Garage - Down to Earth Goodness 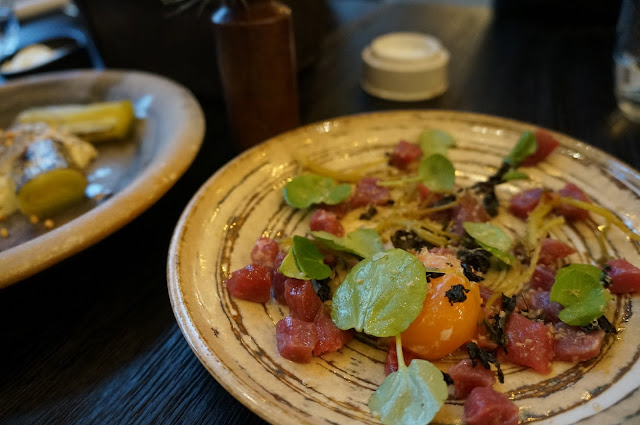 After a slightly underwhelming dinner at The Manor the previous evening, a morning full of surprises and my failed London transport planning, we arrived at Paradise Garage 20mins late. He chose the venue because they are supposed to serve great Bloody Marys, though our expectations of the food somewhat dwindled after our experience at The Manor.

The restaurant was only a few railway arches from Mission. The cosy dining room was warmly lit with hanging light bulbs against white tiled walls; the dining tables were much more polished than its sister restaurant. The menu was not dissimilar to The Manor, we spotted similar ingredients in slightly different recipes. Given there were four of us plus a baby, I opted out of the tasting menu and chose a couple of small plates from each section and the signature whole rabbit as our main. Bloody Mary - tick.

The mildly seasoned venison was diced in small cubes and served with a semi-cooked yolk, which reminded me of the one in Smokehouse. The gooey egg carried an intense richness that accentuated the raw brilliance of the meat, drawing out the delicate flavours with a smooth mouthfeel. Interestingly he didn’t like this venison tartare as much as I did. He felt the preserved custardy yolk somewhat defied its purpose and left the meat dry. 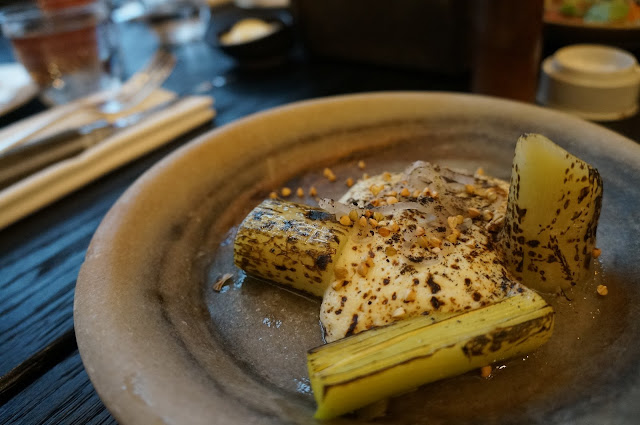 The leek was succulent and sweet, lightly charred on the outside to give it a touch of smoky bitterness. The airy mousse with light yeasty, cheesy aroma served as a dip to the crunchy leeks. The toasted buckwheat was quite hard and harsh on teeth, I would have preferred to have gone without. Still good overall. 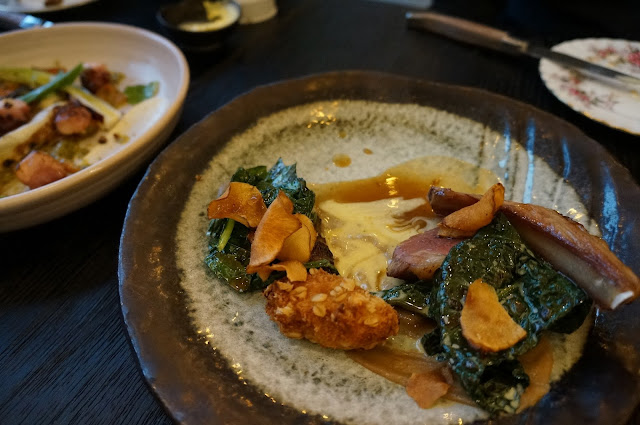 This was excellent. The lamb cutlet was roasted to a scarlet pink and of milky tenderness, with a small rind of charred fat that oozed the soft nutty taste of lamb, complemented by the bitter greens and meaty jus. The small nugget wrapped in a crispy shell clung onto the creamy sauce; it was a delectable contrast to the delicate chop. 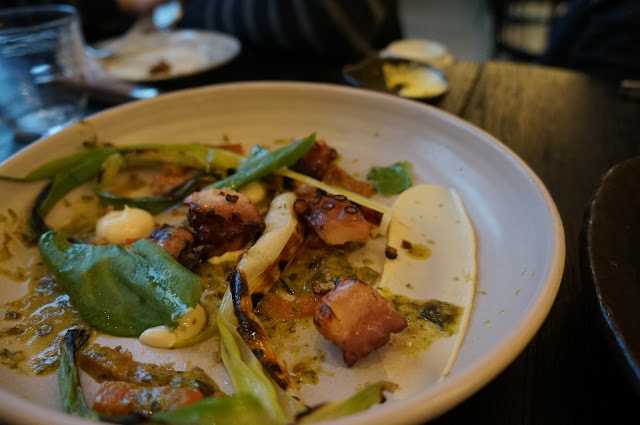 The cubes of octopus tentacles were bouncy but not overly chewy; its seafood sweetness has disappeared but the dollops of roe cream and verde salsa-like dressing made up for the flavour. It was good, though nothing too impressive. 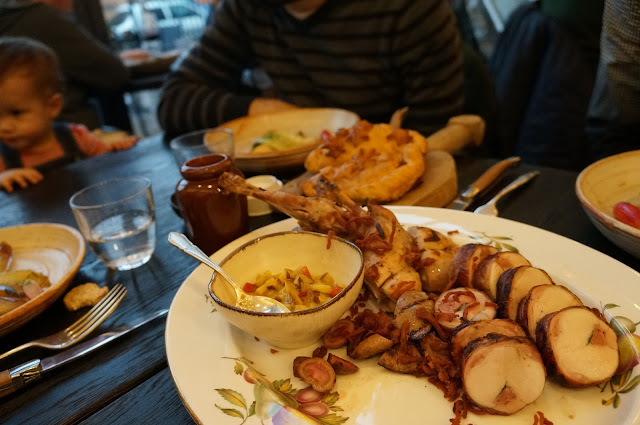 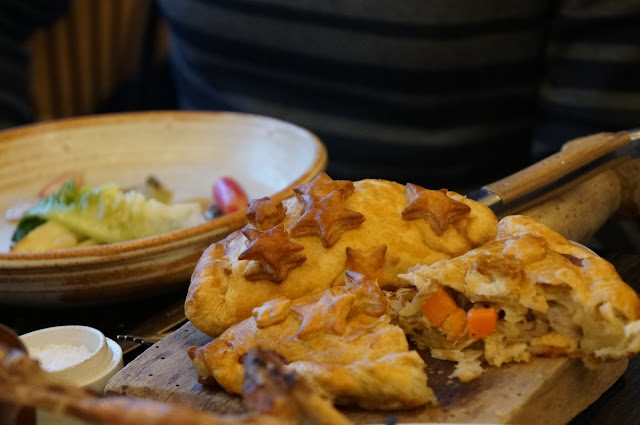 This rabbit was much bigger and meatier than I expected. The saddle brese was soft, similar to chicken though perhaps juicier; with a healthy pour of the thick flavoursome gravy, it was a satisfying mouthful of boneless chow. As an avid pastry lover, he particularly appreciated the turnover that was packed with shreds of rabbit meat and root vegetable dice in a thick broth, encased in crumbly, fluffy pastry.

It was an excellent alternative to a Sunday Roast. 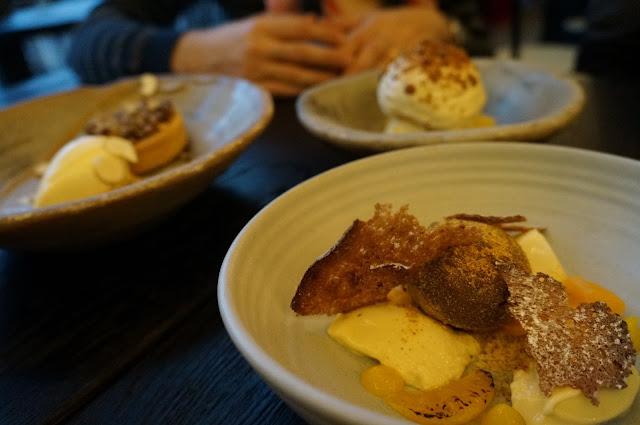 The beer ice cream was particularly interesting. the huge cloud of cream was malty with a distinctive wheaty-bitter aftertaste. 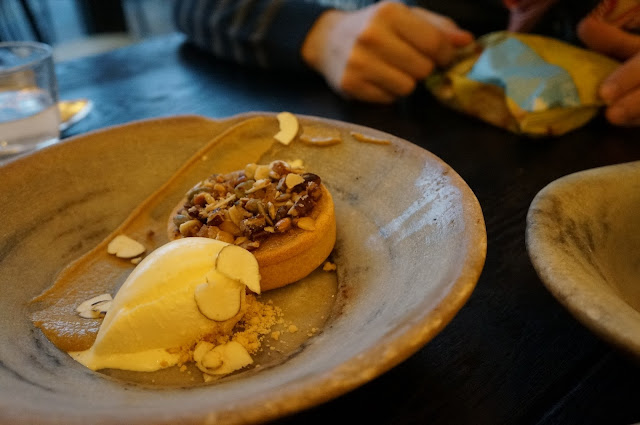 We spent the better part of our Sunday afternoon in the warmth of Paradise Garage. It was a great space for catching up - good cocktails and nibbles for sharing in a cosy bubble of relaxing ambience. Staff was attentive and friendly, and most accommodating to the little one (who was on his best behaviour). Despite a similar menu to The Manor, I thought PG took more care in their cooking, delivered cleaner recipes where ingredients work better together.