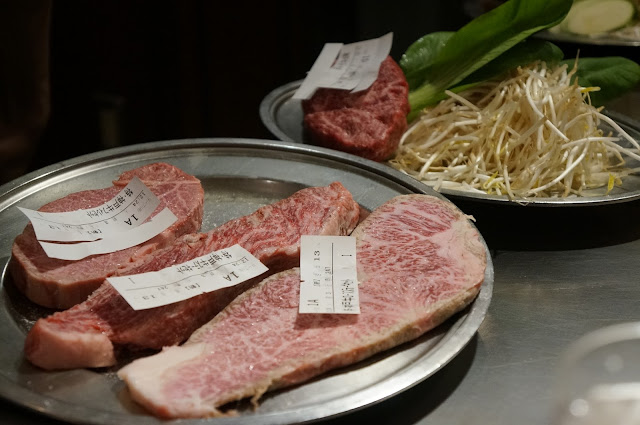 Having had Hida beef on our last trip, our target this time round was the renowned Kobe beef.

Kobe is only 30mins from Osaka by train using Hankyu railways; train runs every 10mins for 320 yen. Most restaurants serve Kobe beef in teppenyaki style. Seeing it was Mama and Papa Chan’s first Kobe beef experience, I decided to go with the crowd to Steakland in order to calibrate their benchmark. It also gave them the vote of confidence when they saw the massive queue on the main street outside the restaurant at 12noon. A quick tip here, Steakland on the main strip attracts the longest queue; turn into the alley approx. 20m from their main store, there is another Steakland “Kobe branch” that is nested on 6th floor in the building. This one has a larger Japanese clientele and the wait is much shorter. 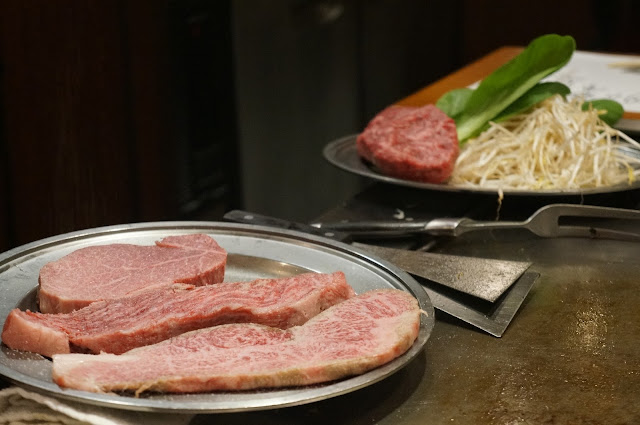 After warming up with the salad, soup, grilled mushrooms and courgettes, our chefs showed us our 3 steaks before he sets them on the grill. 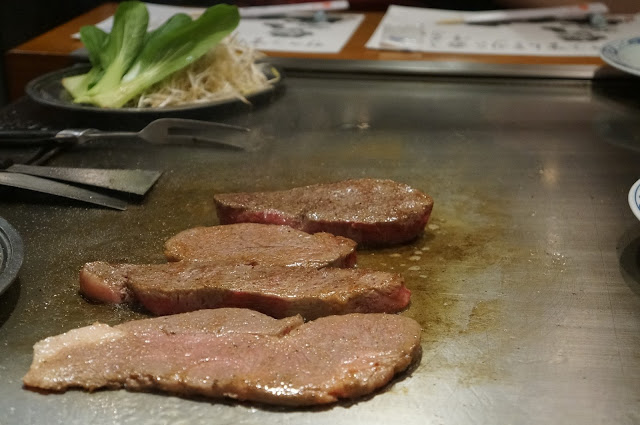 Watching the hunk of ultra marbled steaks hissing away on the grill was sweet torture. The chef kindly split the three steaks among us. 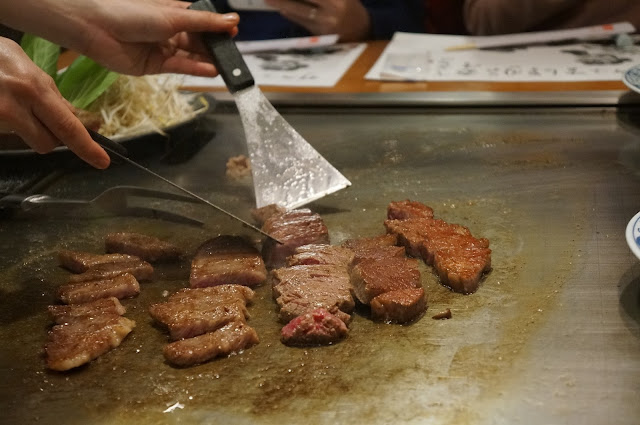 To be fair, all three cuts were mind-blowingly delicious. Papa Chan’s expression says it all really - the pure shock and disbelief that meat could simply dissolve away to leave a bomb of beefy richness was earth-shattering. 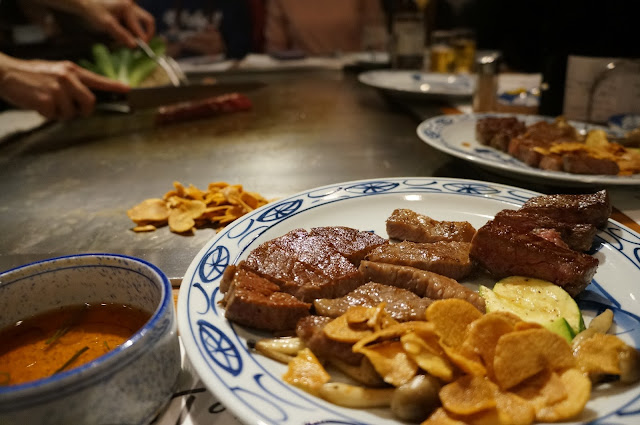 The cheapest cut (could be rump), though soft and tender, had a touch more grain to the muscle that translates to a slightly rougher mouthfeel even when the fat began melting away. That said there were more beefiness to it - it carried more meaty flavours to blend with the buttery aroma from the marbling. 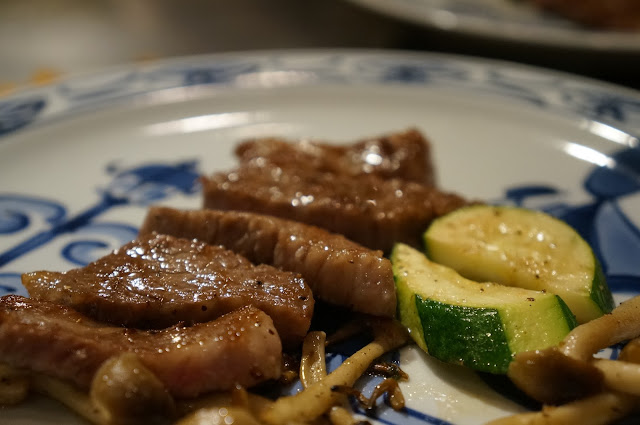 The loin cut, like the rump above, held some structure to encourage chewing, but the muscles were finer and smoother, leaving a more velvety finish as the small pockets of fat were released. 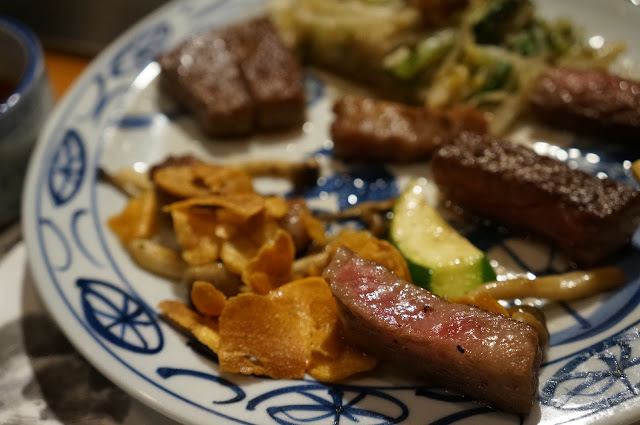 The finest cut of three was in a different zone; the marbling was so rich that the meat almost liquified. The muscles laced around the fat for a faint hint of pink hue on the slab of meat, and upon grilling, it was the softest meat I had ever tasted. It was like a cube of steak-flavoured butter on tongue. It could get heavy though, especially if one had the whole portion. Personally my favourite was the loin, I enjoyed the structure to the meat and the flavours from the leaner muscles. That said, the tenderloin was quite unforgettable. 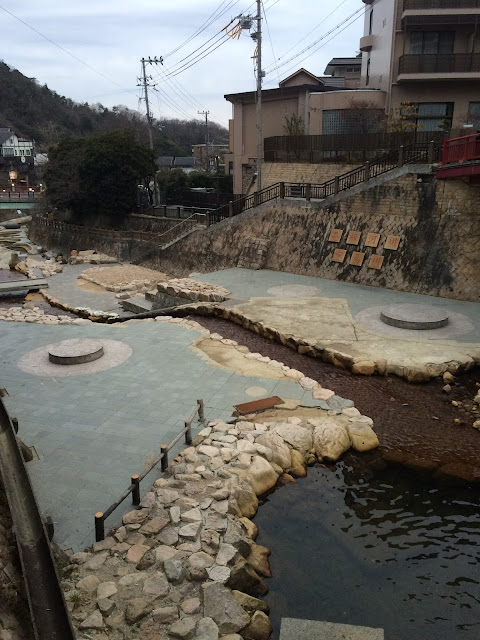 We took the bus to Arima Onsen to wash off our grease-laden guilt. The JR buses leave once or twice every hour from Kobe- Sannomiya bus terminal 4, takes 30mins (770 yen / 1440 rtn); local buses leave every hour at the same terminal, takes 50mins (700 yen). TaikoNoyu (太閤の湯) is only a short uphill walk from the bus stop. It offers 12 different baths, outdoor and indoor, for male and female guests separately - 2400 yen per adult / 2600 yen on weekends. 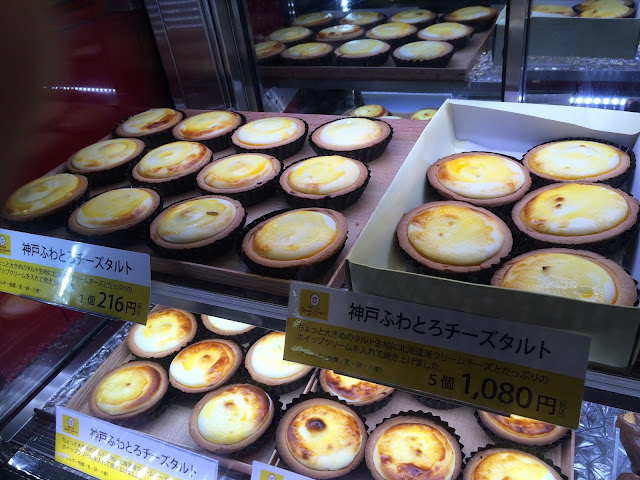 One other must-eats in Kobe was cheese tarts from Sweet Oven; these little tarts have invaded Hong Kong a few months back and people were queuing for up to 3 hours just to get their hands on them. Well, I guess the craze has long died down in Japan and the Kobe branch only held a constant stream of 4 or 5 people in the queue. They were fantastic, buttery cookie tart base with a thick, wobbly cream cheese filling with a lemony fragrance, lightly toasted on top for firmness. Addictive. 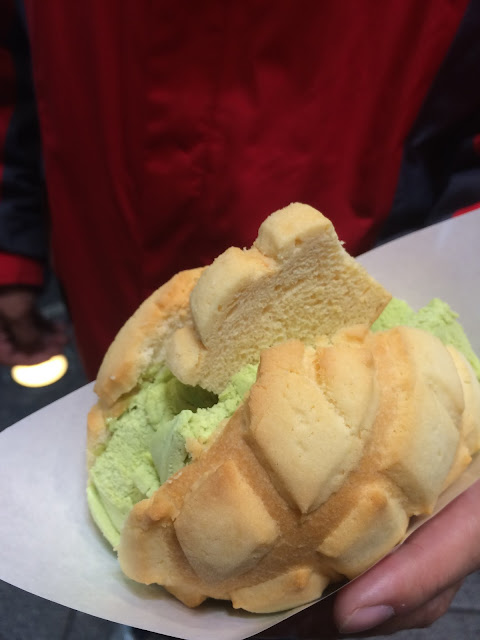 The following day we returned to Osaka from Kobe and did the usual. This melon bread with matcha ice cream was trending; warm sweet fluffy bread with a crumbly shell paired with smooth green tea ice cream. Win. 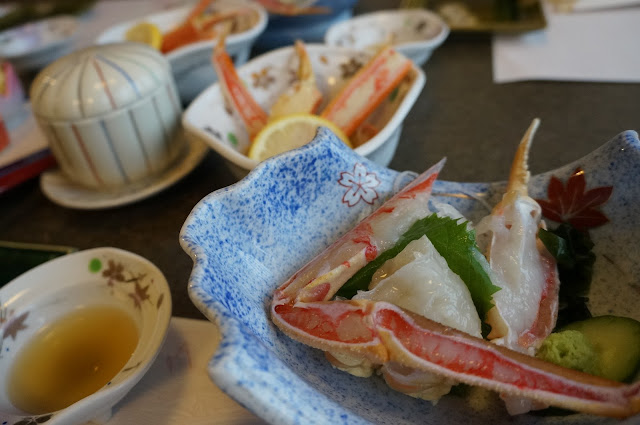 Previously Mama Chan and I have avoided Kani Douraku because we felt it’s too touristy; I’d rather save the snow crab experience for Hokkaido. Having seen the crabs offered here, which is quite small, we didn’t think it was worth the effort. But Papa Chan wanted to try - the last time he was in Japan, I was 6 years old. I felt obliged to indulge him.

You know what? I was right. The snow crab feast was very underwhelming. Not even mediocre; it was borderlining awful. Granted everything was very pretty and served in kaiseki style, the quality of food was pretty poor.

The cold cooked crab legs were chilled to harsh denseness and drained of all the crabmeat juices. Similarly the sashimi was served too cold which destroyed the delicate flavours in its rawness. The charcoal grilled crab legs were sorely overcooked that some of the meat was parched to a brittle sheet, while the 'crab gratin' was a pathetic macaroni cheese topped with shreds of crab meat. Tempura had a batter coat so thick that could keep the long-dead crab leg warm for days; incidentally a crabstick would have been less bland. 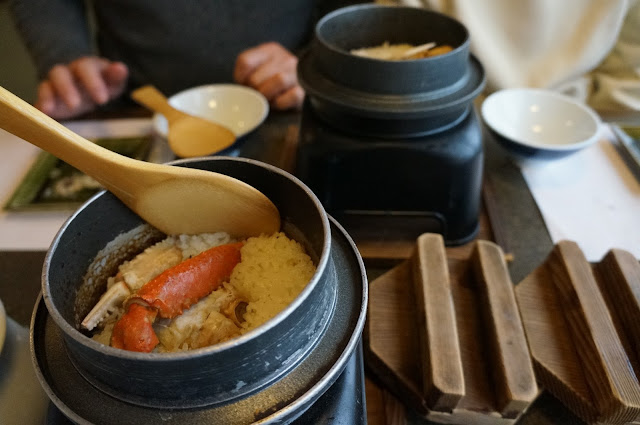 That claypot rice was simply a waste of gas - the tasteless crab legs did nothing to the rice but got in the way, extracting the low quality meat from the shells would have been pointless consumption of energy. The burnt rice at the bottom was black and bitter, not the intended crispy rice crackers. Guess this is because our waitress couldn’t give a flying fuck.

I’m no snow crab expert, but I know what rubbish is when I see it. Anyway, I could go on even though hordes of people will continue to queue. 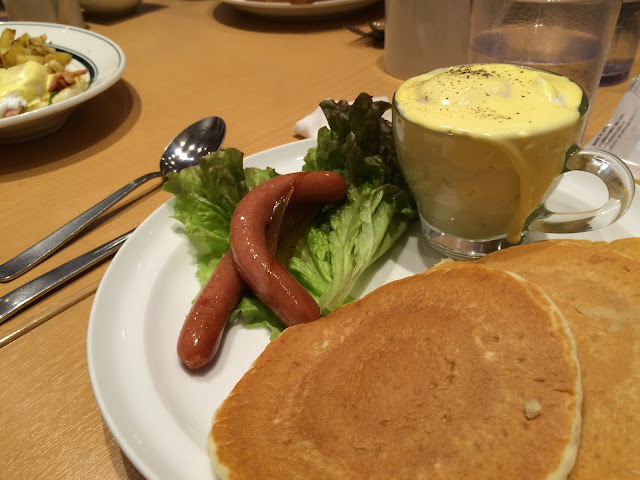 After binging on ramen and sushi for a few days, we changed things up and went to Eggs n Things for breakfast. It came from Hawaii, serving pancakes and omelettes. Though it was a long shot from exceptional Eggs Benedict, my Eggs n’slut was decent breakfast grub. The ‘slut' was a soft poached egg on a bed of mash, topped with hollandaise sauce - not bad. Considering good breakfast spots are hard to come by in the area, this place opens at 9am and hits the spot.