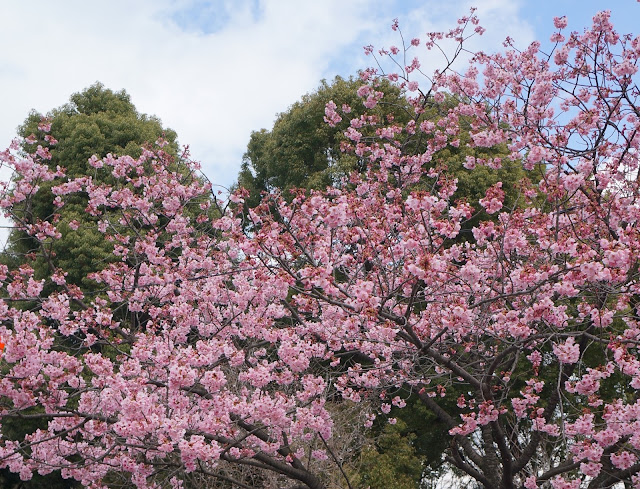 Tokyo was almost new to me. I have always been in the Osaka camp because Tokyo seems too big and too busy with too many people. That said I was excited to see the capital of quirkiness. I was 6 years old when I last came to Tokyo, it was also the first time I travelled by plane, so all I can remember was loving the plane food and hating the haunted house in Disneyland.

Narita Airport is much further out than Haneda, but the trains are simple enough to navigate. It was a 80min journey to Asakusabashi without the Skyliner. Knowing we were up for an early start for Fuji Q Highland the next day, we had an early night after Nihonbashi Yukari, followed by the sexiest sakura eclair dessert from Mitsukoshi Ginza food hall. 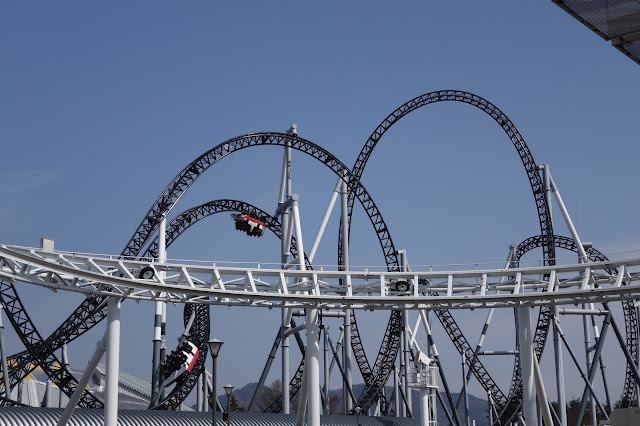 First bus to Fuji Q Highland is 7:10am. The Toku Q-pack offered best value as it combines the return bus journey from Shinjuku (3500 yen) and 1-day pass to all rides (5200 yen) for 7300 yen. I think the Highway bus is the fastest and most convenient option as it took only 1hr 40mins and stopped right in front of the park entrance. The challenge was booking early to reserve seats for the earliest bus. One must reserve online to secure seats, the system is simple and self-explanatory on their website. We saw a few people who just turned up at the bus ticket office without a reservation and had to wait for a 11:30am departure.

We arrived at 8:50am and picked up our tickets at a separate queue away from ticket office. The first queue to join should be the fast pass kiosk; each fast pass grants you a dedicated time slot to skip the queue for one ride at 1000 JPY; these are limited. I wasn’t keen - doubled the cost, seemed a 30min queue that would cost an hour+ at the ride and I was adamant it was mid-week in March. Took a punt; the stakes were high…

We headed straight to Eejanaika as I read the queue for this world record ride could cook up to 4 hours. It was a 2hr wait when we got there at 9:15am and the queue slowed significantly as people split to either side of the train. 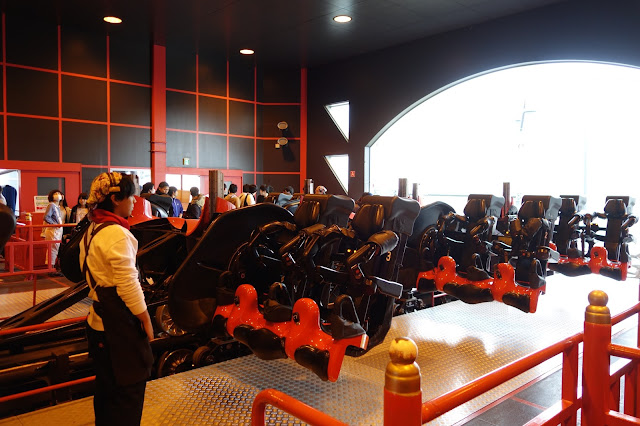 With our feet dangling, we were thrown into twisted loops and the spinning seats made the experience even more heart-stopping, especially when Mount Fuji kept appearing upside down throughout the ride. It was a pretty damn awesome ride. 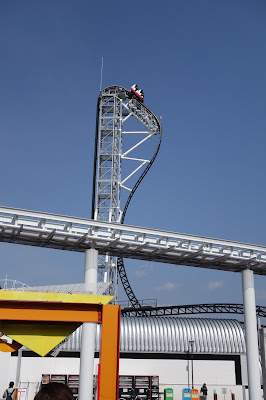 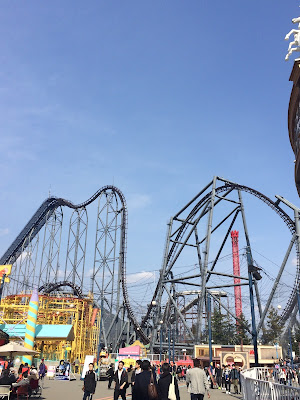 With our post-ride satisfaction faces, we headed to Takabisha. Known for its vertical ascent that shoots skyward to the top, then hangs at a tilted end before the steepest free fall at 121 degrees. We waited for 2hrs and 50mins, skipped the last bit of the queue as they were looking for 2s to fill the ride. I think this was the least of our favourites, probably because the steep drop wasn’t as fast as we anticipated. The tilted top where we were hanging and waiting for the drop was scarier than the actual free fall, which was quite short. It was still a tremendous ride and beats 99% of other rollercoasters, just not the best in this park. 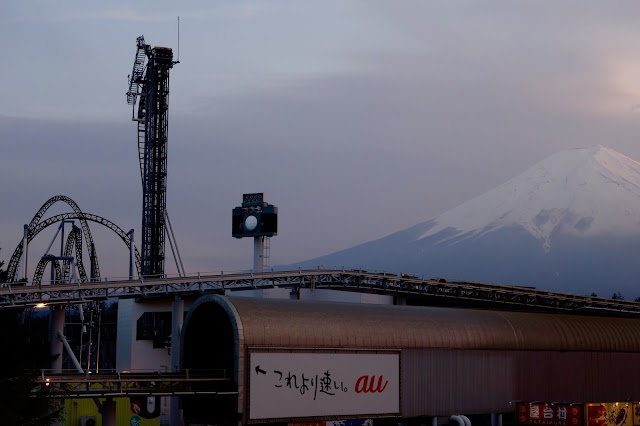 By 2pm the line for Dodonpa was less than 3 hours. With any luck, we should be able to do all 4 rides – a sense of relief washed over me. Dodonpa was possibly my favourite; the acceleration was incredible as we shot out of the tunnel at 172km/h in less than 2 seconds. It was incredible.

I was ecstatic to see the queue for Fujiyama was only 90mins at 4:30pm. Had we not covered all 4 rides because I missed the trick with the fast pass, I would have never heard the end of it. Never.

You know sometimes you queue 2 hours for a 30-second ride, then thought, oh, was that it? Not here. Even with the 3hr queue, we came off each one thinking, that was totally worth the wait. The closing time for the park is a bit of a mystery as multiple websites suggest different times. It closed at 8pm during our visit and there are later buses, but we wanted to get back to Tokyo at a reasonable time. 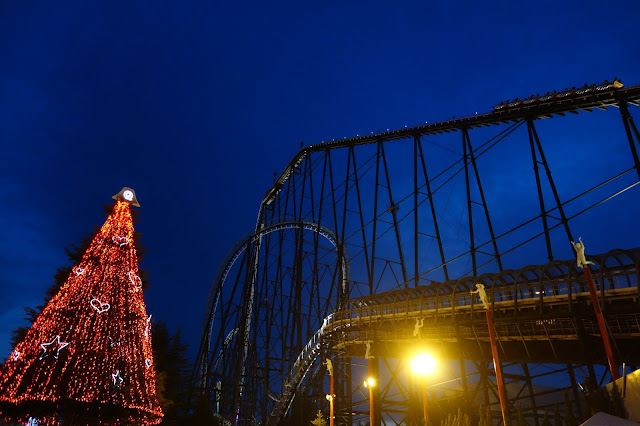 After a simple dinner at Akihabara, we made our way to M’s. Akihabara is the area for the weird-and-wonderfuls, so it only makes sense that it houses a 7-storey sex shop, as brightly lit as the 7-11 next door. It’s quite a comprehensive store that caters for all, but not half as dirty and kinky as expected, in the sense that it wouldn’t be indecent to walk down the streets in one of the costumes. Maybe I have seen worse? To reclaim his innocence and wash away all the things he had never wanted to see, we finished the evening at Taito crane game store. Heaps of confusion and 500 yen later, we left empty handed.

The next day we headed to Hakone. Given its proximity to Tokyo, it’s one of the most popular hot spring towns. We got the 2-day Hakone Free Pass, which granted us access to every mode of transport in the area except for the RomanceCar from Shinjuku to Odawara. The Hakone region was like an operating transport museum; first it was a 15-min ride from Odawara to Hakone-Yumoto. There are plenty of onsen hotels and a main strip of old-town street with restaurants and shops that sell Hakone specialities. If you don’t plan to venture into Lake Aishi, this would be the base to stay.

From Yumoto there is a different Hakone Tozan train that goes up to Gora (40mins). Not much to see on this journey except for trees and skies, or in our case, fog. From Gora, a Cable Car took us to Sounzan (15mins), where we were staying at Gora Hanaougi-Sounkaku. But why stop there - there is also a Ropeway from Sounzan to Togendai, from there one could take a pirate boat across Lake Aishi (45mins) to Moto-Hakone.

The onsen hotel boasts traditional Japanese charm; staff was warm and helpful despite the language barrier. It’s a relatively small ryokan, and so the onsen facilities were quite basic; the public outdoor bath had very little view and the private onsen was rather simplistic. On the plus side, it’s tranquil and quiet without masses of tourists. 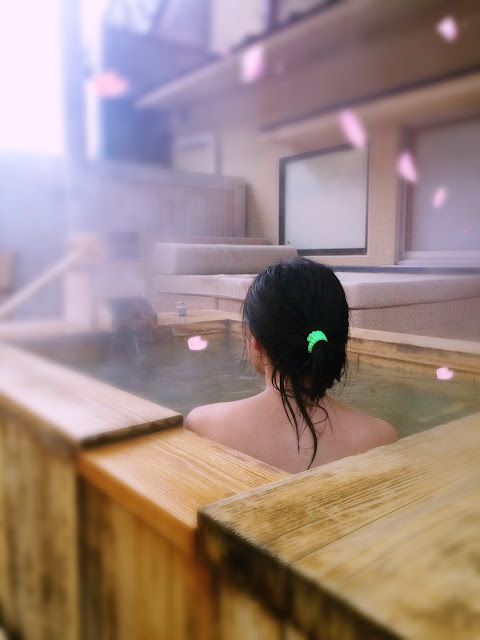 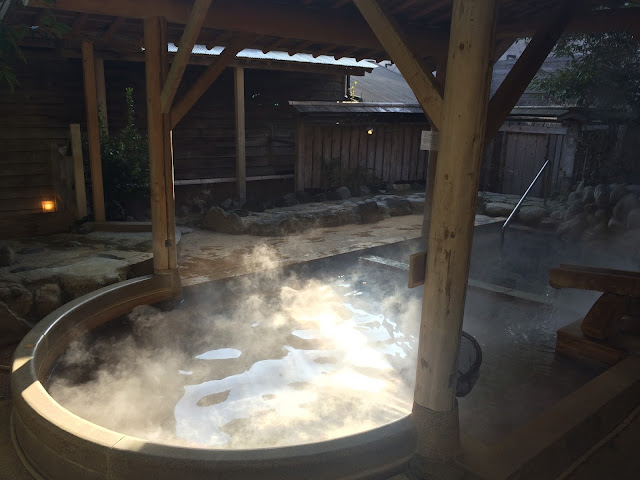 The kaiseki-style dinner was okay, whatever that was missing in the food, our hostess made up for it with her enthusiasm. 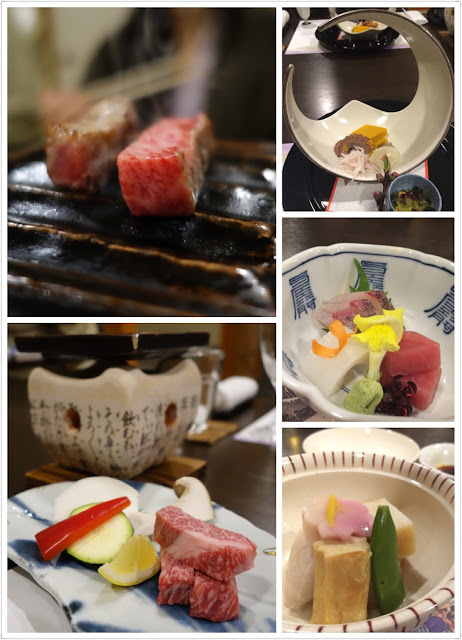 After an excellent Japanese breakfast, we made the most of our Hakone Free Pass and headed down to Lake Aishi. Since we are already so far in the mountains, might as well see everything before heading back. There is an excellent delivery service in Hakone that sends baggage from the hotel to Hakone-Yumoto station (or vice versa), so we travelled light without backtracking - with my 'extra light' bag. Annoyingly Owakudani (The Boiling Valley) was still closed off to public due to excessive volcanic activity. That was one of the main things I wanted to see on this trip; we drove pass the outskirt of the site briefly on the bus, and it looked like hell-on-earth with jets of steam shooting off from cracks in the rocks – would have been fun to walk around the active volcanic zone and try real onsen eggs that have turned black from the sulphur in the water. 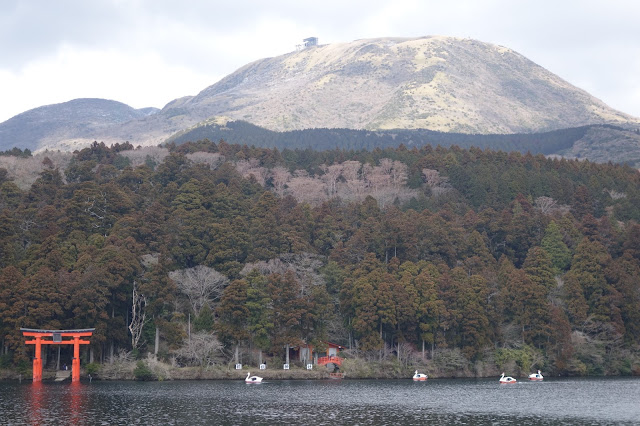 There was a fair bit of cloud so we couldn’t see Mount Fuji. We got off the boat at Moto-Hakone, checked out Hakone Shrine and bought some delicious curry bread at Bakery & table before catching the bus to Yumoto. Despite it being a tourist spot, I quite enjoyed strolling around the small town by the lake.

Bus K took us back to Yumoto station in 40mins. We had a mediocre katsu don and ten don for lunch before picking up our bag in the station for 800 yen. We had time to shop a little in Ginza before dinner; sadly the Bape counter is tiny at Dover Street Market, so we did some jewellery browsing at the magnificent Mikimoto tower.

Dinner was teppanyaki at President Chibo in Shimbashi: 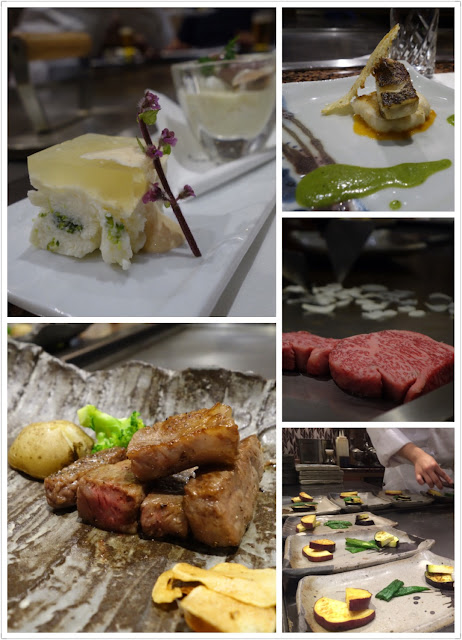 The following day we headed to Iruma Mitsui Shopping Outlet. Personally I prefer Mitsui outlets to Premium, because there are more Japanese brands than European ones, and usually there are less crazy Asians. From Ikebururo, Irumashi station is 40mins away, then it was a 10-min bus ride. Good day all round:)

After a lot of searching, we finally found Tonkatsu Dai Kichi in Ikebukuro station. It was totally worth the hunt. The katsu was mind-blowing; the breadcrumb coat was flakey and fluffy, disintegrates in to air after a crispy bite; the pork retained its juices and tenderness with a slight trim of lard for extra flavour - the control of oil temperature is so perfectly mastered. The creamy croquette, loin and prawn set was equally exquisite. This is miles ahead from the lame excuse of ‘tonkatsu' in London - possibly my best katsu experience. 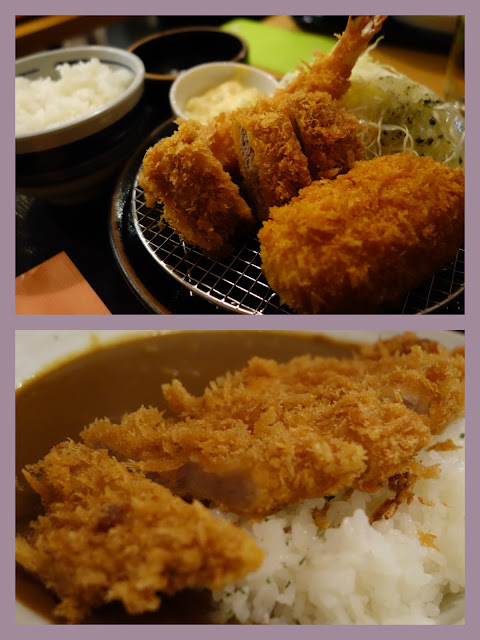 Having enjoyed our McDonald’s experience in India, we checked out McD’s special items in Japan too. He ordered sakura fries, a worryingly green soda drink and a pie so strange that the Japs can’t even give it a name. He hated every single item.

Before flying home, we spent the last day in Ueno Park for a bit of Hanami. Although it was end of March, weather had been unpredictably cold, so the cherry blossoms weren’t in full bloom. What was quite cool though was the random flash-mob opera and music performance dotted around the park. 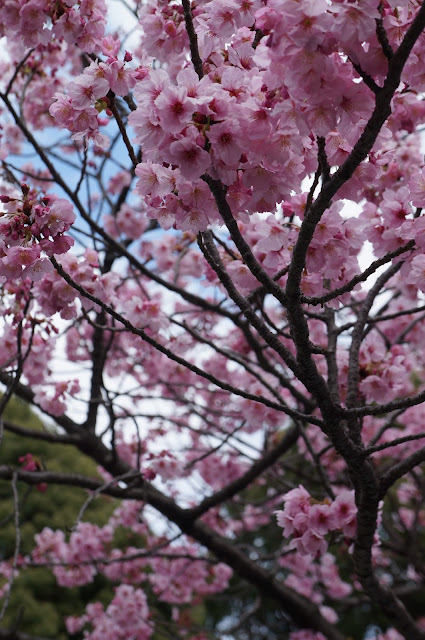 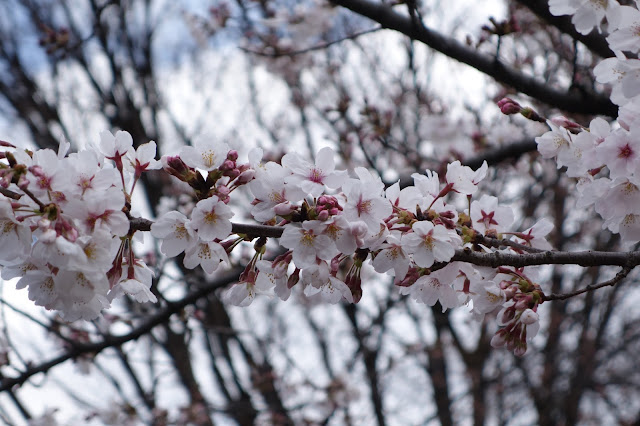 Near the ponds in the park, there were two rows of food stalls selling all kinds of snacks. We fell for the Doraemon cake and giant crab leg - both sorely terrible.

Lunch was a fantastic chirashi don at Uotetsu in Nippori. There was no menu for lunch, we sat down and they serve us a bowl of sushi rice topped with thick slices of beautifully fresh sashimi. It was freaking delicious and great value for money at 1500 yen. 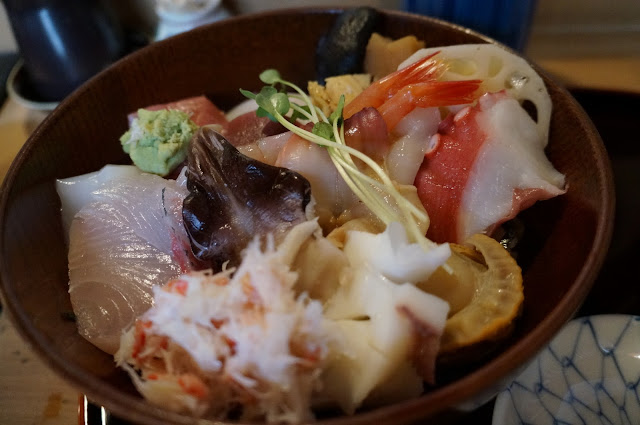 There is a small street with lots of hot snacks and desserts just outside Uotetsu, everything looked interesting. We picked a small cafe that specialises in chestnut for a soft ice and choux puff. The chestnut puff was particularly good with fragrant cream and a thick disc of sweet, ripe chestnut wedged in the middle. 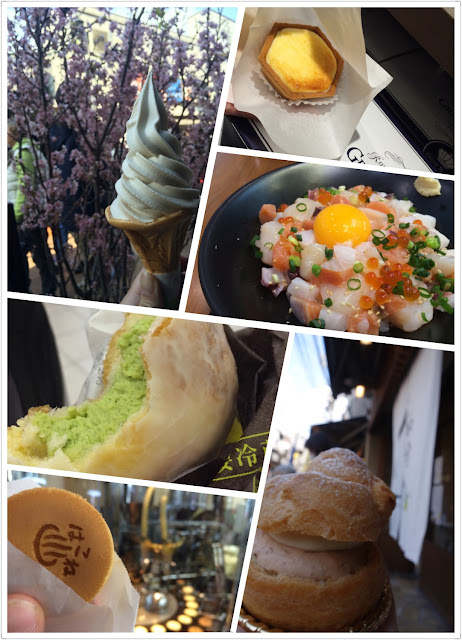 There is no doubt more diversity in Tokyo than Osaka, and given things are more sprawled out, it feels somewhat less claustrophobic as tourists are not concentrated in just one spot. It’s been a busy trip and there are still things left on our list unchecked. He was hot on Tabelog to make sure I ate well, it’s never enough sushi, tonkatsu, ramen and bentos, or even onigiri and random munchies from the convenience stores… Another great trip packed with happy memories.

Thank you for looking after me, as always. 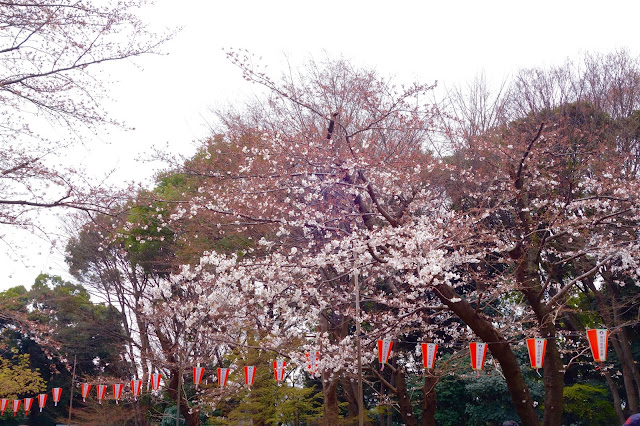