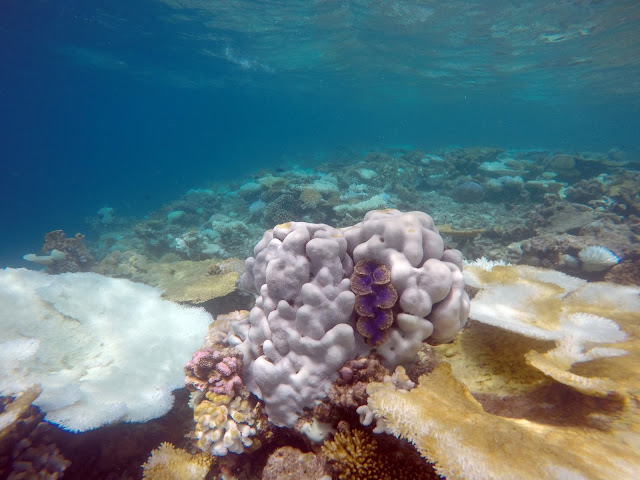 My interest for the Maldives dwindled as more luxurious resorts popped up and more photos of people standing in front of a water bungalow appear on Facebook. But then I picked up diving again and suddenly a weekend in the Maldives was quite appealing. So with Mama and Papa Chan, I booked to fly out on Friday night, then back super early on Monday.

At first glance the immaculate 5-star resorts didn’t seem inaccessibly expensive – I mean £300 a night isn’t impossible – it’s dear, but not impossible. Then I realised this price excludes the transfer fee to the resort island, which usually hovers around the $200 USD person per way. For the honeymooners splashing out coz they see it as a once-in-a-lifetime thing, I get it. For me, however, it’s to dive and snorkel… in one weekend… ain’t got time for resorts. This is where the local islands are the real gems. 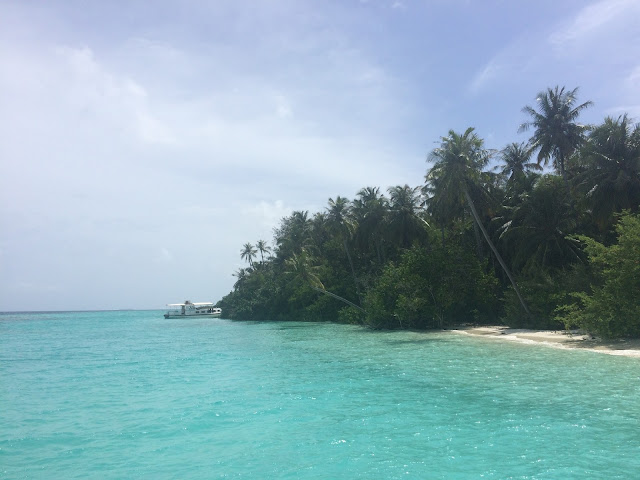 Since the opening of the first guesthouse in 2010, Maafushi continues to develop and now it has a good range of accommodation from $50 - $150 a night. Only 40mins by speedboat from Male Airport, there is also a public ferry ($1) that runs once or twice daily during day time, it could take 1hr45mins. The hotel arranged the speedboat for $150  for the 3 of us, but it would only be $20pp if we were joined by other guests. Well, seeing I was on Tigerair, I had a very strong feeling not all 150 people were booked on a seaplane to a resort island; I was pretty confident there would be others going to Maafushi, even in low season. If you arrive with no transport arrangements, I suggest keeping a list of hotel names of the local island you are visiting, then rock up to their pick-up reps to negotiate tagging along.

The night boat journey was eerily beautiful as we sped through the dark abyss of the ocean, only lit by the perfect full moon with faint linings of fluffy clouds.

We arrived at Maafushi just after 9pm. Kaani Village and Spa is a 3min walk from the jetty. The staff in the hotel arranged a day trip for Mama and Papa Chan the following day, and I was recommended Maldives Passion for my dives. The dive centre was a minute walk away, close to the tourist bikini beach. Marc swiftly went through the basics and sorted me with the gear. Boom - All ready to go in the morning.

Restaurant options are limited, and by limited I mean you have a choice of eating or not eating. Most hotels and hostels have some kind of restaurant, I read online that Kaani Village does atrocious food at snail speed (judging by the breakfast, must be true). So we settled for Rehendhi along the main road, where we saw a few tables occupied by foreigners. The menu tried to cater for all nationalities; I felt local dishes would be less risky than western dishes. 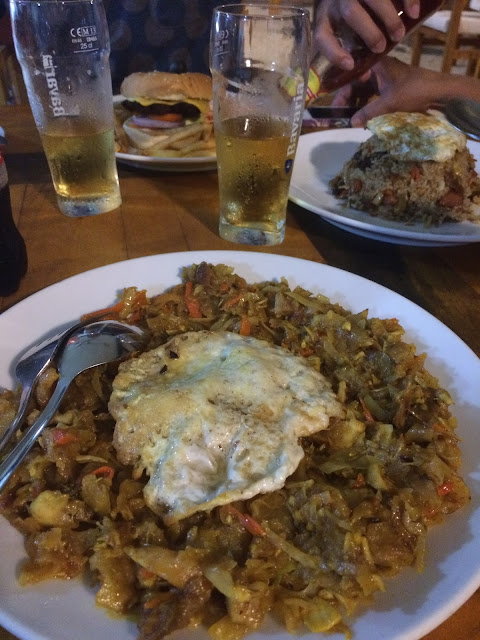 My chicken kottu roti was quite good, perhaps slightly mushy but very flavoursome; Mama Chan‘s mixed fried rice was a safe bet; Papa Chan was feeling brave with a beef burger (seriously?!), and regretted it the moment it arrived – the patty looked like a coaster that had survived a bonfire, served with cold buns and stale vegetables. Oh, and there is no alcohol on the island, only non-alcoholic beers.

Things are slow here; waiting 45mins for food to come out of the kitchen is not uncommon. As Maldives import just about everything, food is comparatively expensive; it averaged around $15 per person with a drink on a local island, and considerably more on island resorts. 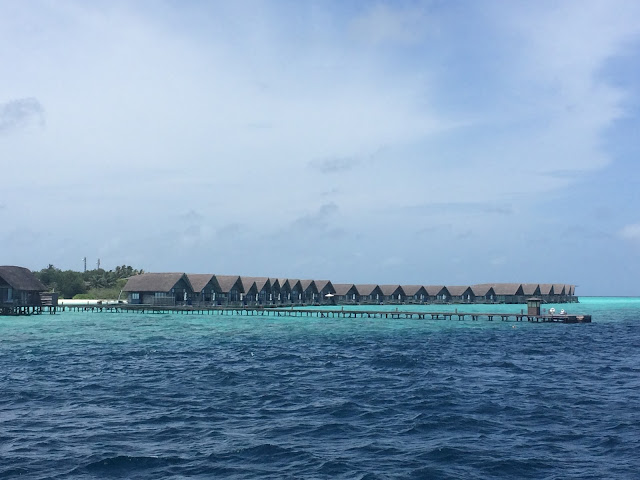 We set off at 8:30am sharp in the morning with our divemasters Marc and Jinah. One of the best things about travelling low season is small group excursions; I was only joined by 2 other ladies who were much more advanced. Our first dive site was about 20mins away in Kandooma Thila. 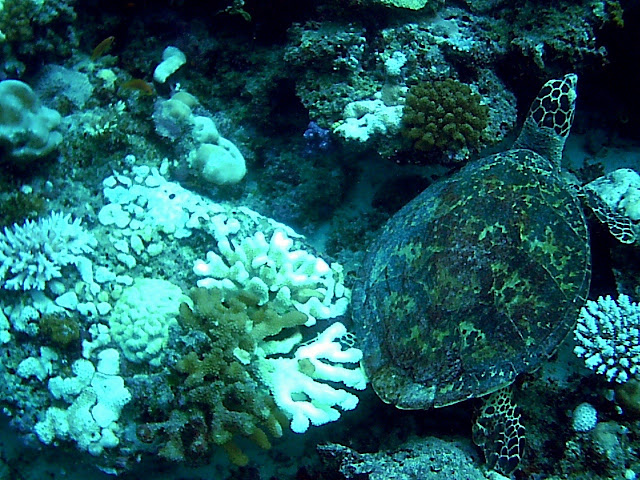 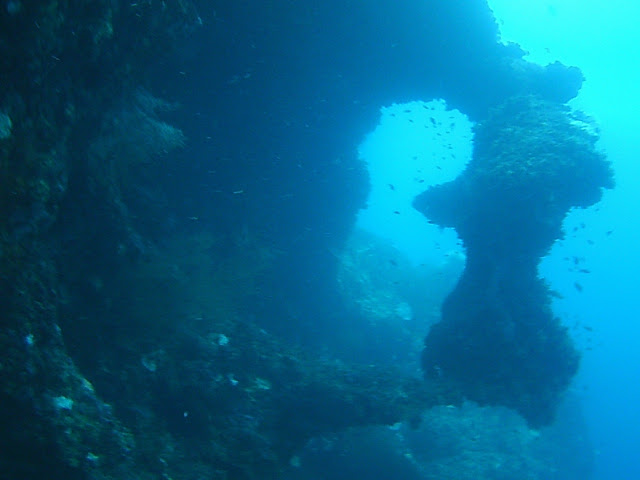 After our first dive, we checked out another local island called Guraidhoo, probably what Maafushi looked like 5 years ago, much less developed with an increasing number of small guesthouses and shops; the colour of the house was said to represent the political party the owner supports. Marc explained corals used to be the main building material, but these have now been banned.  We also saw a small group of people fishing in the sea, apparently one person holds the net at one end, then the group would scare the fish from the other side… I guess they had a good run as they sounded quite triumphant. Marc pointed out that waste management is a pressing issue, as the islands are developing at a higher rate than education. It was not uncommon to see piles of plastic and construction waste accumulated at one end of the island. He is doing a lot of good work with the students to clear the mess up, but it definitely needs more resources and focus. 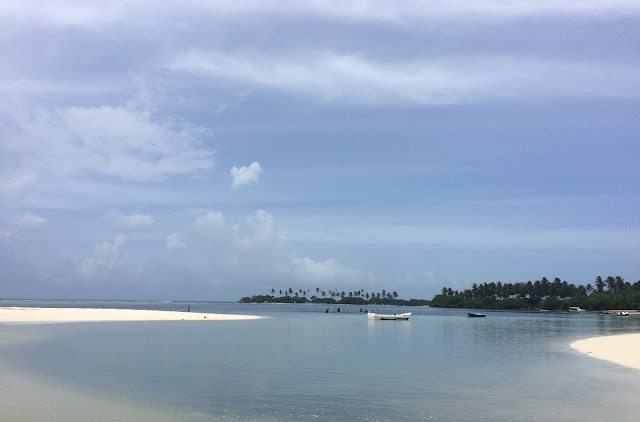 Our second dive was at Guraidhoo Corner. I saw a baby white tip shark, just not quick enough to get a good shot… 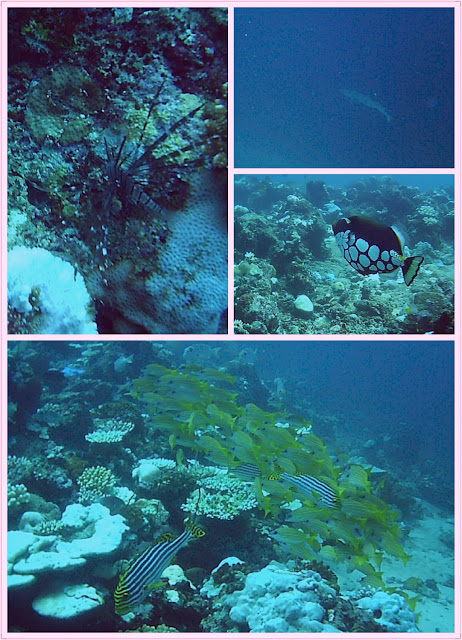 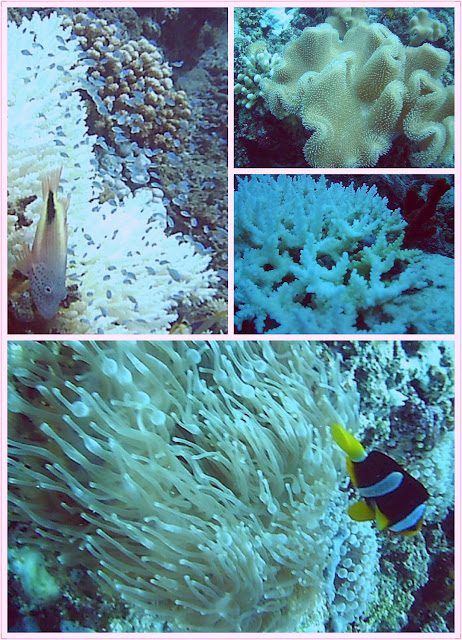 I only signed up for 2 dives, so I had the afternoon free while Mama and Papa Chan were both on a full-day sandbank picnic trip. Marc and Jinah took me to lunch at Hot Bites, which was a good lunch / snack bar. I figured they must know the best things on the menu by now, so followed their order of a chicken submarine with fries – and hey, this was the best thing I ate in Maldives. The other dish recommended was fish curry & rice… he said tuna is the main fish here, but most Maafushi restaurant only offer tinned tuna. Male, however, offer some very decent dishes. 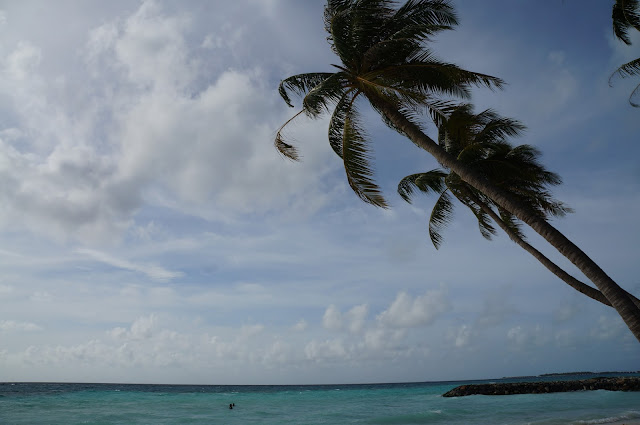 I spent the afternoon on the bikini beach after sorting out the postcard, then picked up Mama and Papa Chan. Their day trip was quite disappointing I heard. The first snorkelling point was sparse with little corals or fish to see, then the second site was deep with fairly strong currents. I think they struggled because Mama Chan isn’t a strong swimmer and wasn’t confident enough to venture far even with a life jacket, and Papa Chan was worried about her. Despite that, the guides were fantastic; the team offered to lead Mama Chan as she floats with her jacket further out, closer to the reefs. But I guess she was too panicky, so they didn’t see much. 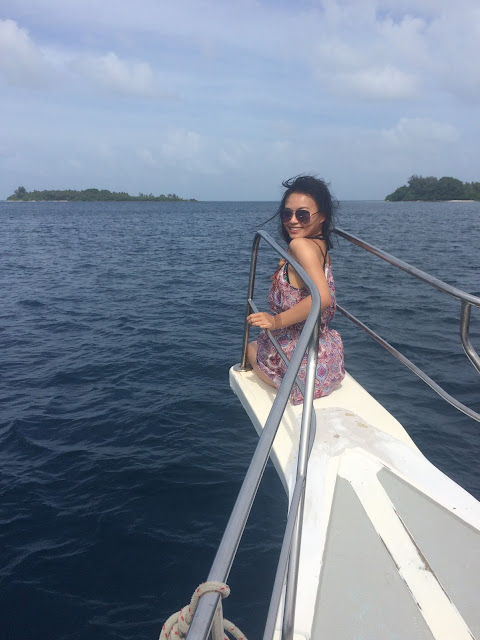 The next day we signed up to a half-day snorkelling trip. I took the queen seat at the front of the boat and spotted lots of dolphins swimming with around, even a huge turtle surfacing for air. 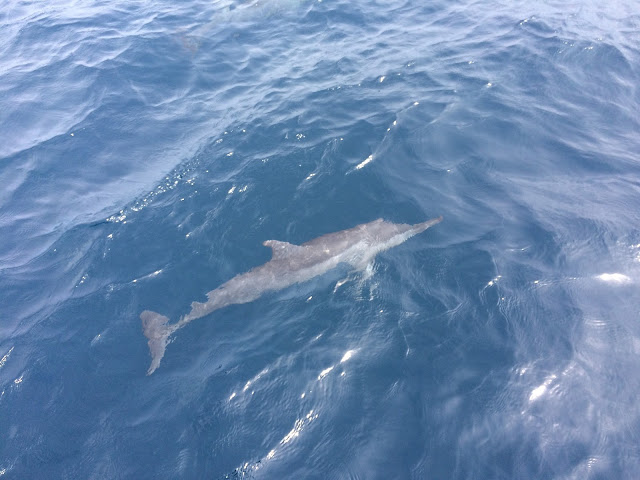 Our first stop was the Turtle reef. We were to follow one of the guides as the other 4 scouted out for turtles, which were very well camouflaged by the corals. Mama Chan was more relaxed, because one of the guides was dedicated to looking after her, held her hand throughout her time in the water, and led her to all the beautiful things under the sea. This freed up Papa Chan to explore too. Most people were wearing life-jackets, but I’d say it just gets in the way if you are a good swimmer.

The guides encouraged me to do a bit of free-diving too, the key was not to panic and control the release of air. They make it look so easy… 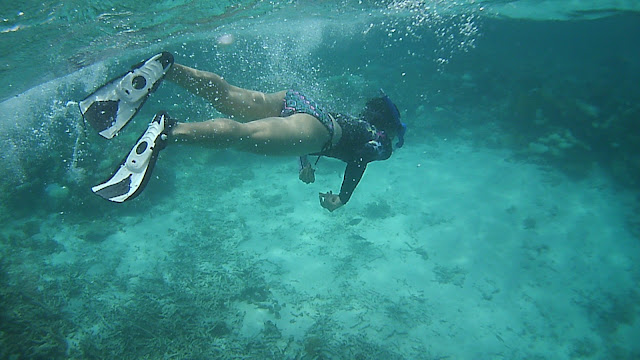 We spotted about 5 turtles, a couple even came up for air. 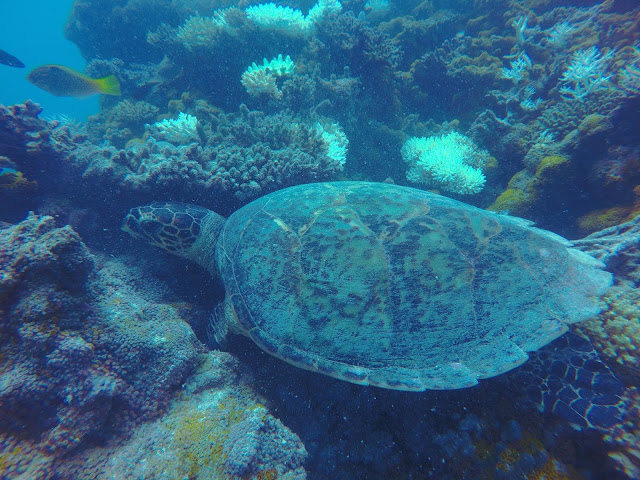 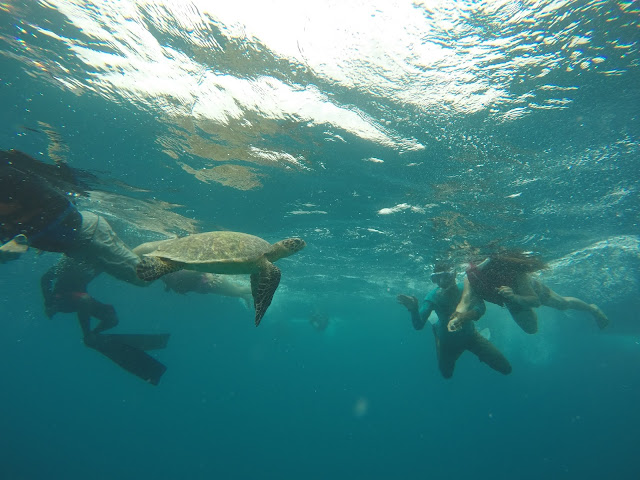 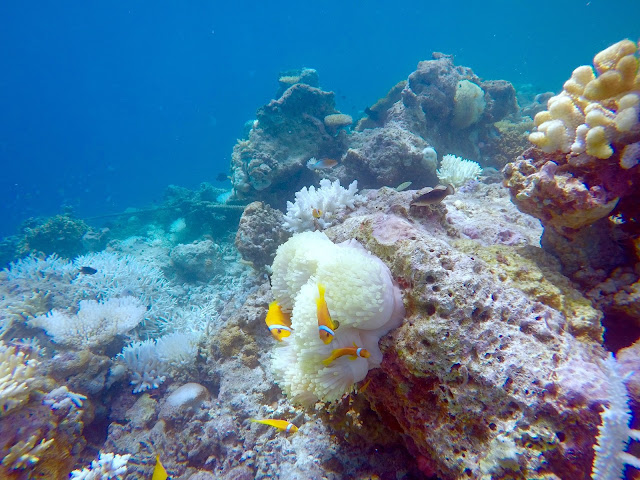 Our second spot was the Banana Reef, where there were abundance of colourful corals. Dive a little deeper and I found a moray and a couple of puffa fish hiding beneath the table coral… 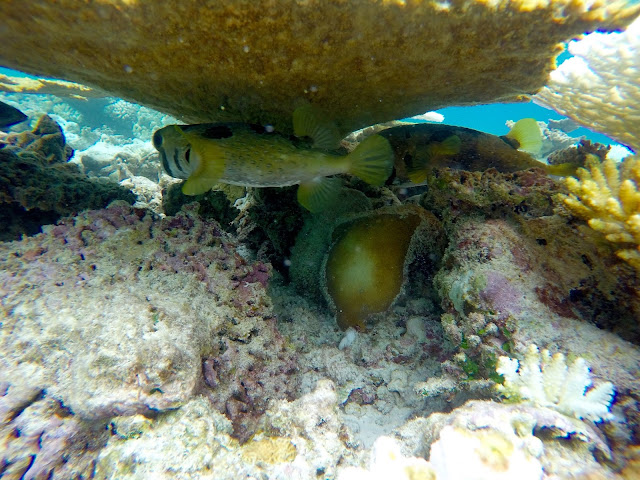 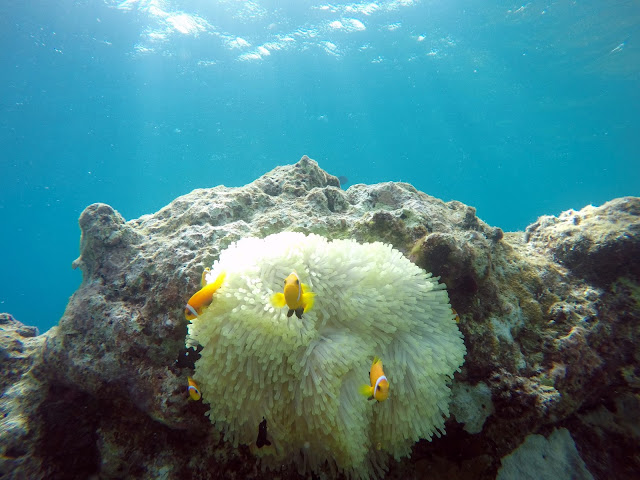 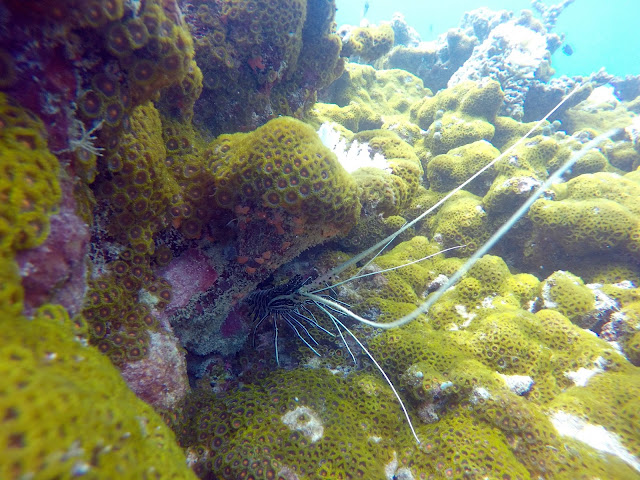 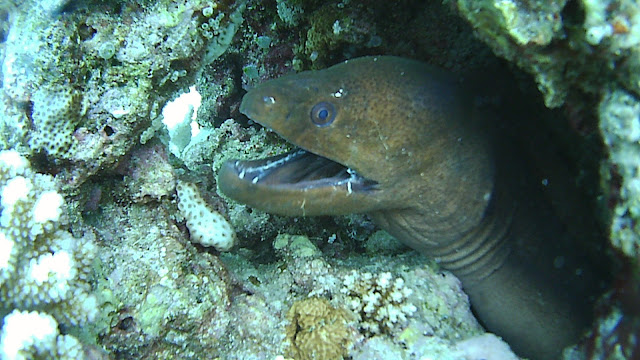 For lunch we stopped at a deserted island that was once an island resort before the tsunami wiped it out back in 2004. We could walk around the derelict remnants, covered by overgrown vegetation. It’s quite a popular spot for people to stop by for picnics too. 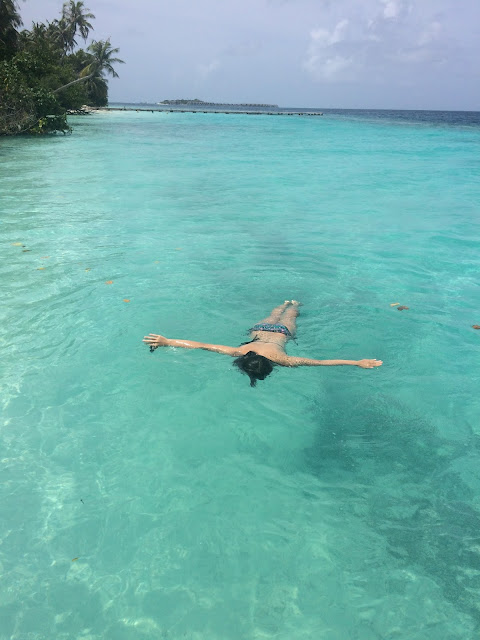 Our last stop was Biyadhoo reef, where there were more variety of bigger fish. 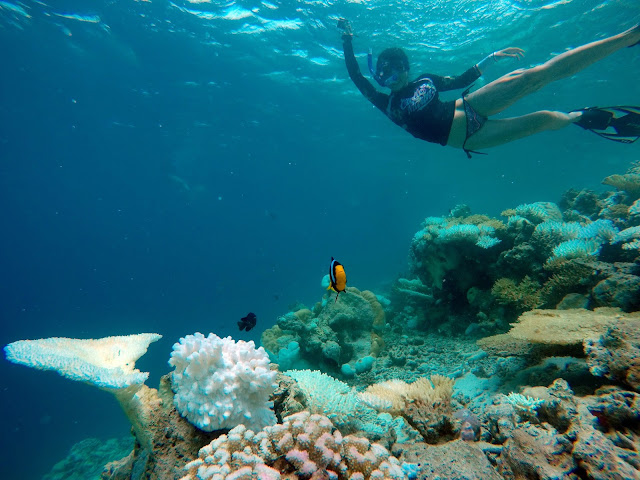 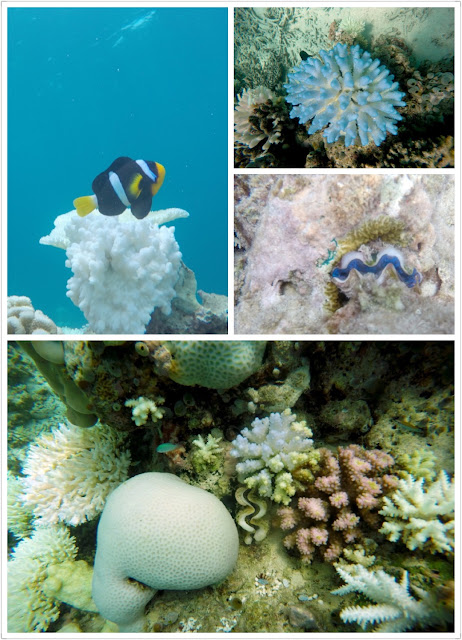 I have a lot of respect for our guides, they made every effort to help us see the most of what the ocean has to offer, yet they were ever so careful and delicate with marine life; strictly no touching of anything in the sea, gentle guiding of the turtles to swim closer to the surface (where 10 people were floating), and making sure people stayed at the edge of the reef where the corals were quite shallow.

One of my pet hates  is when people feed bread to the fish – it’s not good for them! And the people here don’t allow it. Kudos. 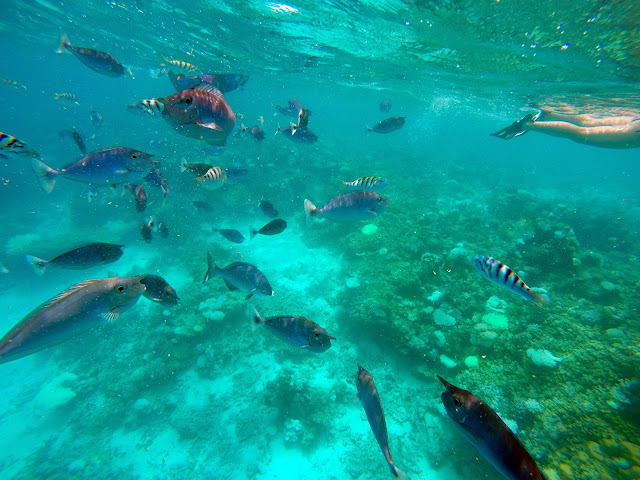 The hotel offered us a room to shower before we head off to catch our flight, the hospitality of the people here has no boundaries. I arranged speedboat transfer with iCom Tours for $20pp at 5pm. I think all hotels offer transfers too, with prices dependent on the number of people travelling – check the notice boards in the hotel lobbies for times and availability.

May is the start of the rainy season in the Maldives. That said I understand from the locals that it rarely rains for a full day, only heavy showers or sometimes thunderstorms for a couple hours. We were lucky in the sense that our mornings started with grey skies and a couple of heavy showers for 10 minutes, then the skies gradually cleared over the course of the morning to leave a very thin veil of clouds over the blazing sun. I definitely prefer this kind of weather to 10 hours of sizzling sun, much more gentle on the skin and more comfortable with the cooling winds. Low season also meant the island was not overcrowded; I had a one-on-one dive with my dive master, while the other pair shared another; the snorkelling excursion had 15 people, looked after by 5 snorkelling guides, not to mention ample space on the boat; the streets and the bikini beach on Maasfushi was mostly quiet, leaving the laid back vibe of the island undisturbed.

My trip to the Maldives was short but wonderful; the majestic ocean and vibrant sealife were as extraordinary as one imagines. I’m grateful that I had a chance to experience the country beyond its luxurious reputation and chat with the incredibly friendly locals. 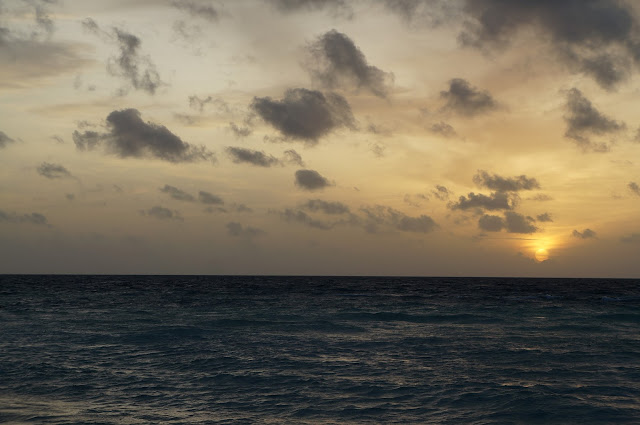