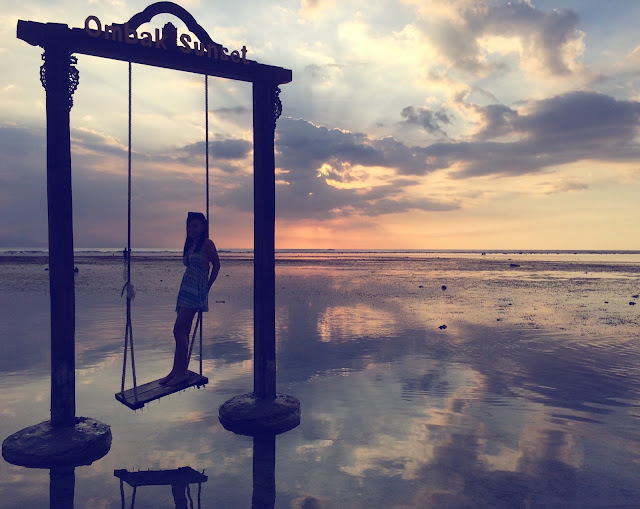 The original plan was to spend a couple of days diving around the Gili Islands, then an overnight trek up Mount Rinjani in Lombok to make the most of an extended weekend thanks to a mid-week public holiday. Then Mama Chan wanted to join, so diving time was significantly reduced and camping overnight on a volcano was off the table.

We landed in the evening and made the most of Bali by having dinner at Cuca. 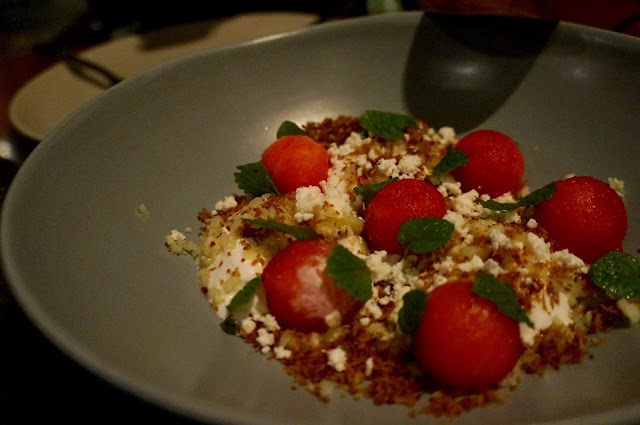 The next morning we were picked up by the ferry company to catch a fast boat at Seminayek pier. There are a few companies that organise private transfers to the 3 Gili islands; we went with Gili Getaway. The boat trip took 2hrs15mins.

A rep from our villa greeted us as we got off the boat, but he was only there to tell us that the villa was a really long walk and that we could take a horse carriage for 100k IDR. Err… thanks. Google Map says it’s only an 18-min walk. The carriage took us on a detour that went pass a mountain of plastic and garbage, as well as a bunch of cows feeding on them. On a more positive note, it was Mama Chan’s first time on a horse cart. Mine too, I hope it was the last.

The villa was great with a private pool and an outdoor bathroom. I think they should tell the housekeeping staff to keep the bedroom door closed when they clean, because we spent half an hour swatting the flies in the bedroom. 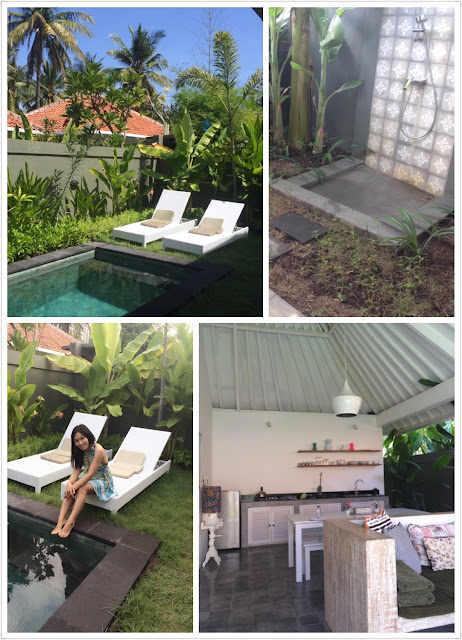 We rented bikes from the villa and made our way to town. Most of the roads were unpaved on the island, depending on rainfall, the roads could be mushy, sandy or bumpy. Sometimes a bit tricky when cycling in town with incoming horse carts and as visitors arrive in batches. But overall it should be manageable even for novice cyclists, just watch out for sandy patches.

We went to book for diving trips and snorkelling. Usually there are 3 dives per day but seeing it was Ramadan, some dive centres are short staffed, especially when locals tend to go to the temple on Fridays. I signed up for 2 morning dives with Gili Divers. All the centres have uniform pricing, so it was a matter of choosing one that you like the look of.

Snorkelling trips generally depart at 10:30am or 1pm, 100k and 150k IDR respectively. These 'public tours' last around 4.5 hrs, visit 3 snorkelling sites and finish with a short break on Gili Meno before returning to Gili T. Provided I come back from my second dive on time, we should make the snorkelling. 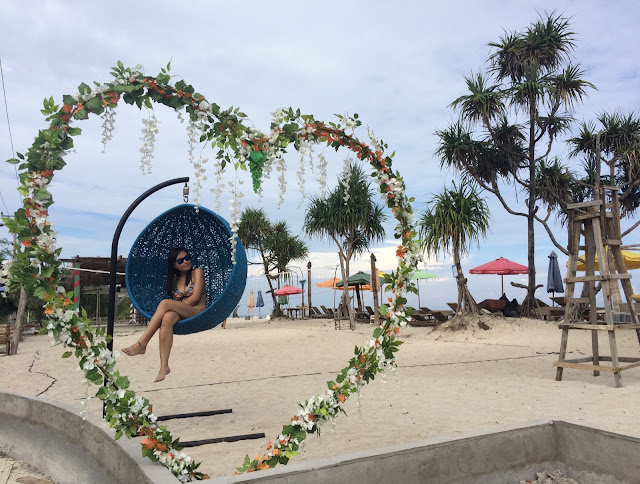 Having sorted the activities for the next day, we checked out the town and marvelled at the abundance of cafes, bars and restaurants. We pushed through the crowd and continued our way around the island clockwise to the west side of the island, where there was a lower density of restaurants, but all with bean bags, swing chairs, trendy hand-crafted furniture and sun-loungers of shapes and sizes. The crowd thinned out on the west side too. We found the famous swings in the ocean, and there were quite a few of them put up by the hotels to attract customers at sunset. We almost made a full circuit and settled for Desa Dunia Beda Beach as it had most people. We later found out the people were probably just waiting for their food, which took over an hour to come out.

Mama Chan doesn't need much feeding, she was apparently still full from the breakfast at the pier. Perhaps it was the sun, but I wasn't particularly hungry either. Sipping on our cocktails, we watched others wade in with their fins and snorkels (available to rent from the hotel) and chilled. Not the entire coast boasts a picture-perfect white sandy beach, some areas have much seaweed and prickly dead corals washed ashore, and the east coast is lined with moored boats. Generally the water was very clear with gentle waves good for swimming. 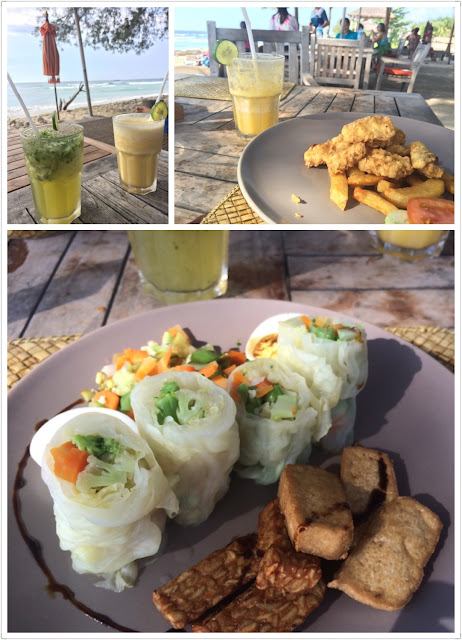 Our food was ridiculous. The gado gado became cabbage wraps with carrots and beans, served with a pathetic portion of peanut sauce; Mum's fish and chips was wrong; it was fish nuggets made with a mackerel-like fish. They failed on both local and international cuisine. On a separate note, Mama Chan feels obliged to order fish & chips on every beach holiday, yet frown upon people having pizzas. Any ideas?

The low tide at sunset means we could walk far into the ocean, where it formed a beautiful mirror of the colourful sky. 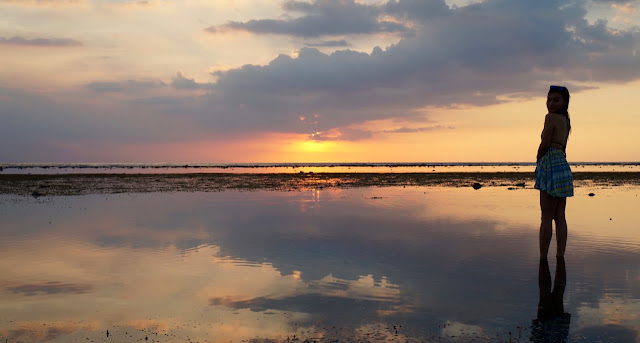 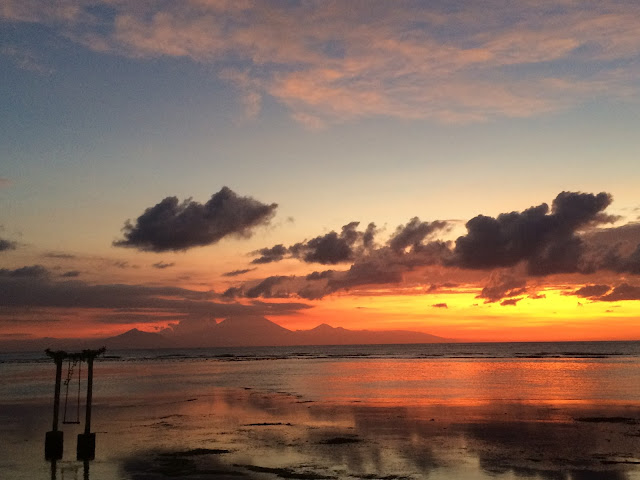 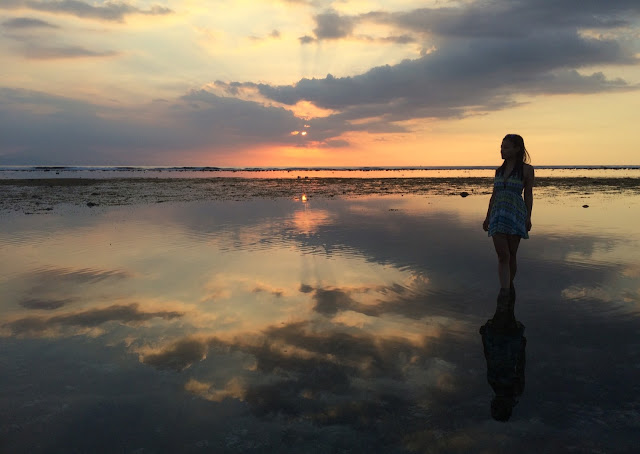 We had dinner at the night market, just next to the jetty. There were various stalls selling bbq seafood and skewers, though nothing looked particularly attractive, just very standard cheap fare. The stall furthest to the jetty had the longest queue - each skewer was charged at 30k IDR. After choosing from the selection, we were given a ticket. About 20mins later we went back to choose 3 types of vegetables to go with rice and pick up the skewers at the end. We enjoyed the calamari and complimentary veg, fish was overcooked to a parched, sinewy lump and chicken was raw. Meh. 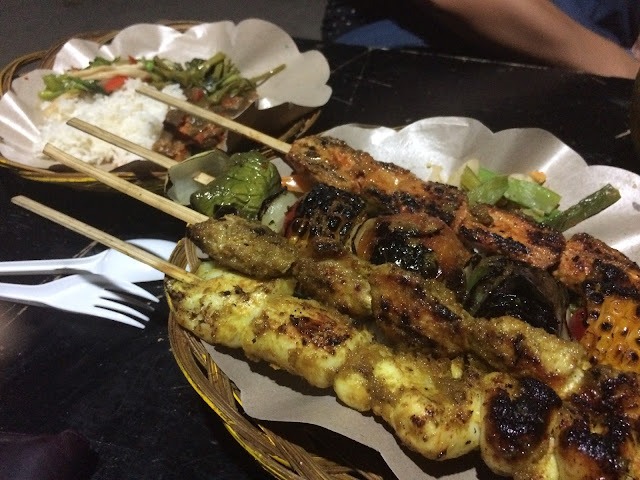 I was hoping to see manta rays at Manta Point, unfortunately it’s a rare sight in Gili, apparently I'd have better luck in Bali. And there were no sharks at Shark Point… lots of turtles though! 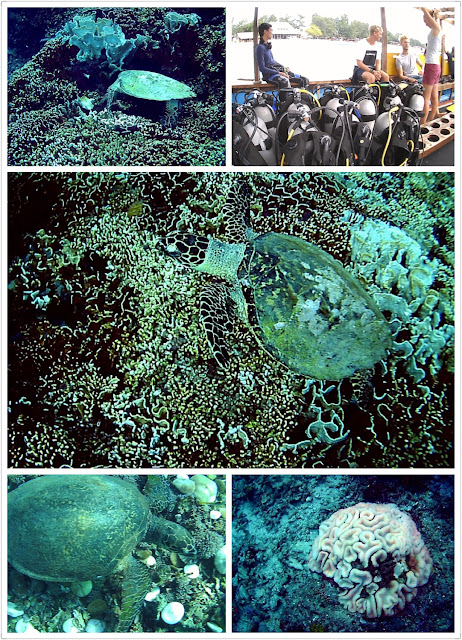 The snorkelling trip in the afternoon was good fun. The boat was packed, mostly with local tourists. Unlike Maldives, we were left to our own at each site, Mama Chan didn’t get her personal guide this time, just me - then again, we’re paying a tenth of the price. The first site was very thin on corals, but we saw a turtle only 2 metres deep, the closest Mama Chan had been to one. I tried to take a selfie with it, but gave up as I didn’t want to stress him out. 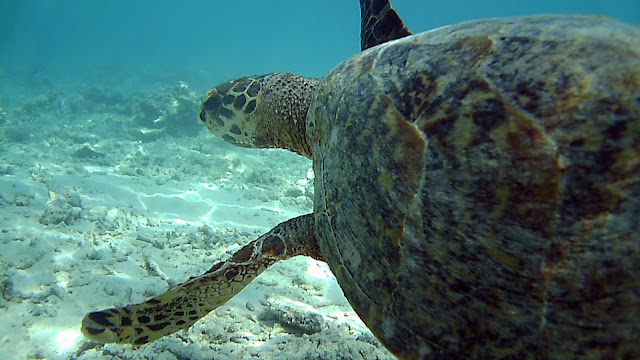 The second site was much deeper, there were bigger turtles and fish. I got very comfortable with free-diving too:) 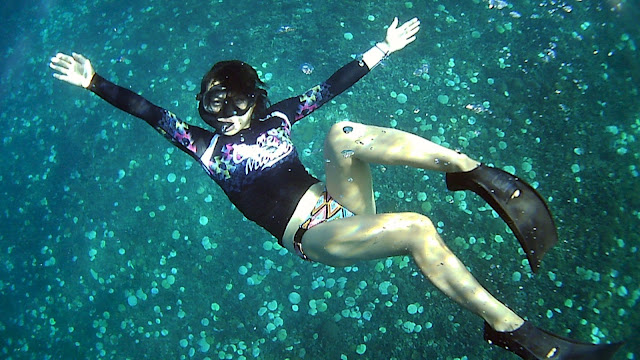 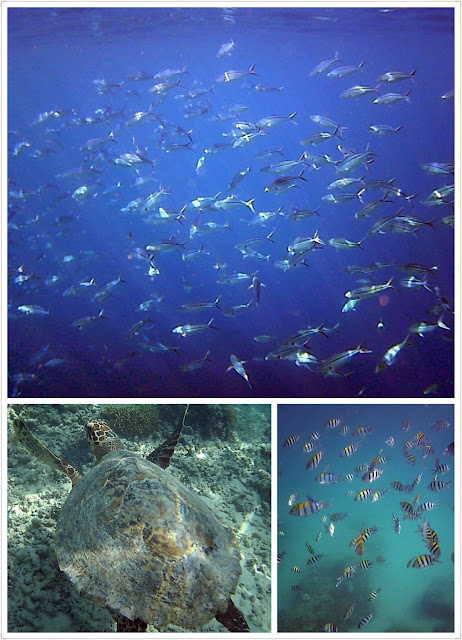 The third site near Gili Air had lots of fish, partly because the guide kept throwing bread into the water, which is really bad for the ecosystem. 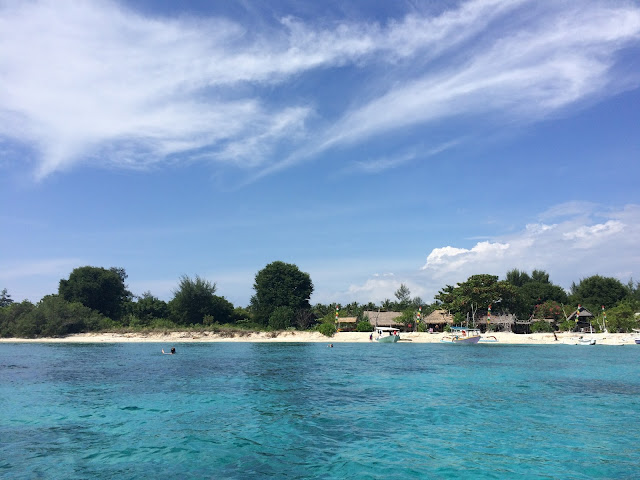 The boat then took us to Gili Meno for an hour or so before heading back to Gili T. Undoubtedly this snorkelling trip was nowhere near as magnificent as the one in Maldives, but it was still good fun. I was knackered - we shared a savoury crepe on our way back to the villa and just had dinner delivered to us as we watched Federer lost at Wimbledon semis:(

Before taking the boat to Lombok, we went back to the swings for some daytime photos. The tide was high and the water was waist deep to get to the swings… 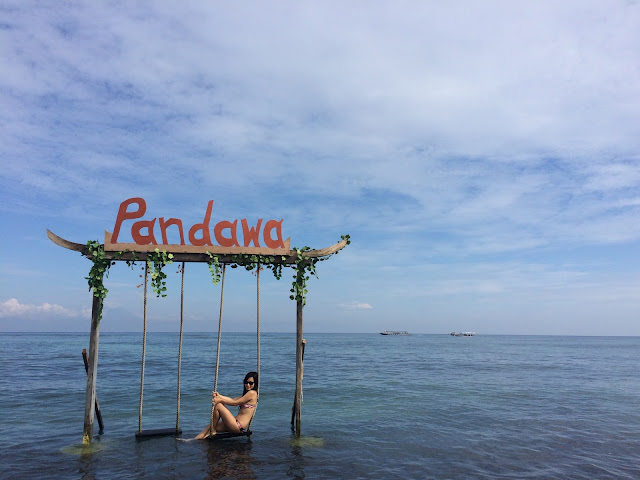 There are slow local boats to Lombok at the harbour, they leave as and when they're full (min.20). On the day the boats were constantly filling up and moving - ticket costs 15k each. It’s a 25min boat ride to Lombok Bangsal, from there we got a taxi for 150k to our resort in Sengigi. There are kiosks along the main street that organise trips to Sengigi directly for 150k each. All they do, is that they put you on a slow boat, then have a shuttle bus at Bangsal to take the group to various hotels in Sengigi. There are also fast boat options at around 300k. 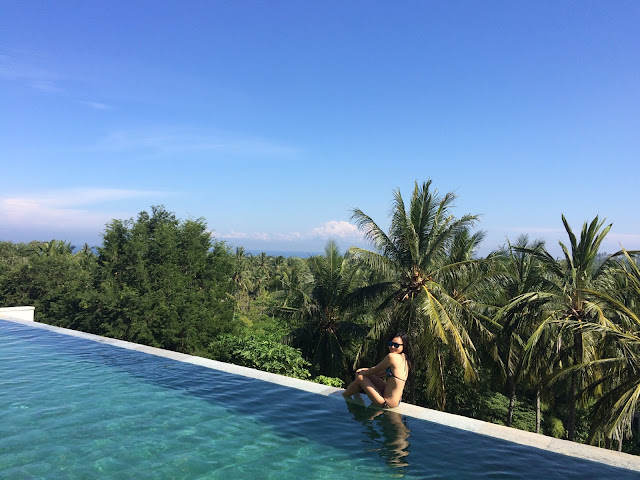 We took it easy in Lombok, mainly just chilled in the resort hotel and made use of its pool. Sengigi beach is quite ugly and there wasn’t much to do at Sengigi town. However it did offer a stunning sunset with the view of Bali's Mount Agung. We ended the day with dinner at Asmara for a Sasak Rijstafel, a tasting menu adopted by the Dutch from the Indonesian feast. The dishes were generally very spicy. 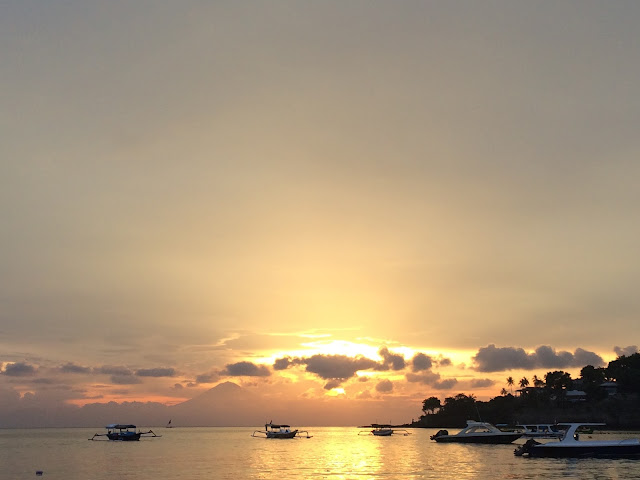 After a hearty breakfast and a blissful spa at the resort, it was time to leave for the airport. The DAMRI bus to Lombok airport leaves Sengigi every hour (35k IDR), took about 1.5hrs.

A bit of drama at the airport: The Lionair flight to Bali was scheduled for 17:40 which worked well for my 20:40 connecting KLM flight back to Singapore. Suddenly all the flights were delayed and ours were re-scheduled to 19:30! Customer service at Lionair was fantastic; I went to their ticket counter for help, in 15mins they managed to put me on a WingsAir flight that had been rescheduled for 18:30, which meant we could make our inbound flight. Phew…

Even for the beginning of July, Gili was surprisingly quiet. Lucky for us, the party crowd was quite subdued so we didn’t see crazy parties and much of the aftermath. I wish I had the time to do the Rinjani overnight trek, but that’s okay - It’s been a very relaxing holiday.