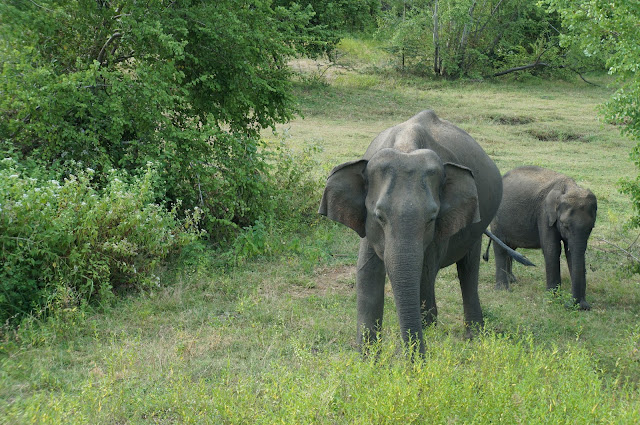 We left our guesthouse at 2am to start our ascend up Adam’s Peak. He asked multiple times if we should get more water the evening before, and for some obscure reason I expected the small stores to be open in the middle of the night. Well, I was wrong. With a little less than 750ml of water, we climbed.

The police officer warned us to ignore all donations requests on our way, and told us to be careful as the entire trail was dark during low-season. The total distance was 7km and there was a police post every 1.5km or so, but I think most of them were unmanned. The first hour was relatively unchallenging, then the stairs got steeper and less regular, the air got denser with fog and the wind got much stronger. Our pace slowed and we started taking small breaks between flights of stairs to catch our breath. About 1hr45m in, we guessed we were half way through. But 20mins later we arrived at a closed temple gate and was told that we had arrived at the peak! It was 4:10am and we made it just under 2 hours 10mins! Oh dear it was going to be a long wait for sunrise. 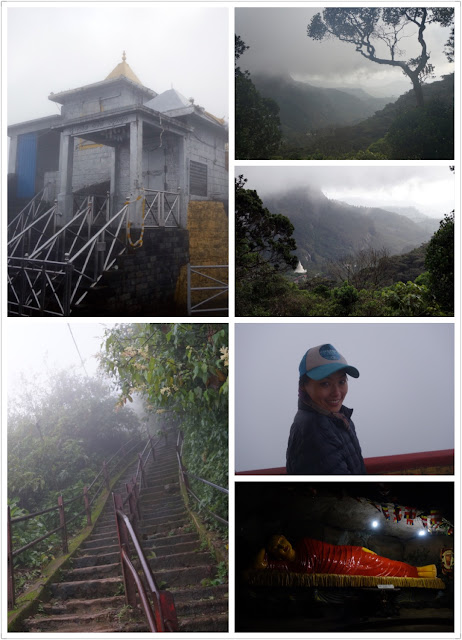 There was an abandoned room next to Sri Pada with a couple of broken bunk beds (and a rat that was rummaging through what was left of a mattress), we huddled with another group that had arrived before us. We were soaked through by a combination of sweat and fog. As our body temperature started to cool, I started shivering in the damp cold air. Later we moved to the basement of a larger room, where a chap was doing good business offering tea for 100 LKR each. It was life-saving tea as my lips were starting to turn blue.

Needless to say there was no sunrise on the ultra cloudy morning; visibility was under 5m. We lingered until 6:10am and decided to make our way down. It was quite amusing to see the trail in daylight.

Our descend took a little longer than we expected, as we took time to breathe in the views. After freshening up and a substantial breakfast at the guesthouse, we made the 9:20am bus to Hatton. There was a bus to Hatton at every hour after this one, but they go into Maskeliya which adds another 30mins to the trip. We wanted to catch the 11:18am train from Hatton to Ella; the bus reached Hatton at 10:55am. We briskly walked to the train station, he went to buy train tickets as I grabbed snacks at the Food City nearby. The mad rush really was rather unnecessary, as we should have known that the train would be delayed, by about half an hour.

There were only second and third class on this train, with no seat reservation. We didn’t manage to find seats in the second class carriages that we paid for (160 LKR), and could have lingered at the open train doors for an unobstructed view of the rolling landscapes of tea fields. The staff managed to find us a couple of seats in third class, in exchange for a tip; there was very little difference between the two classes. It was a shame we didn’t get a window seat, as the journey between Hatton and Nuwara Eliya was very scenic. 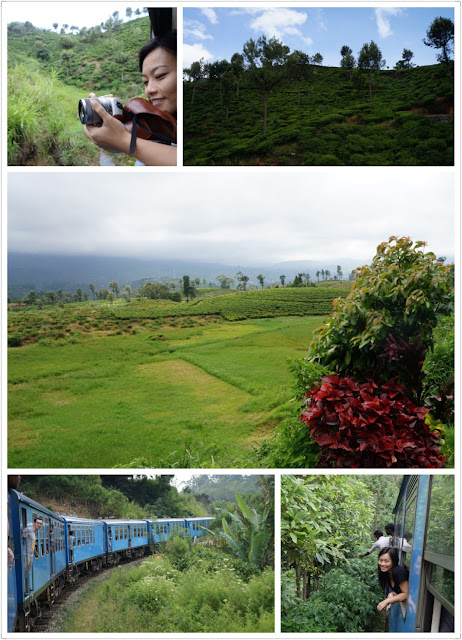 We arrived at Ella after the 4.5-hour train ride. There were definitely more foreigners than locals in Ella; it’s very much a backpacker town. The tiny town centre was lined with cafes that served lattes and sandwiches and guesthouses with sports TV. We found an eatery that didn’t have some hip English name, and chowed down a Lump Rice (lumprais), which was delicious because it was pretty much rice & curry with a fried egg, served piping hot, and some lukewarm rice & curry.

We booked a guesthouse called Romance in Ella, which was an uphill drive 2km from the town centre, hidden along a very steep and bumpy side road. Our host, Sanjee, greeted us and showed us to the one and only room on site. The room featured a glass wall that overlooks Little Adam’s Peak and Ella Rock, and beautifully crafted furniture. Sanjee brought us tea on the balcony and explained that we could walk along the train tracks to the mini waterfall across the valley. 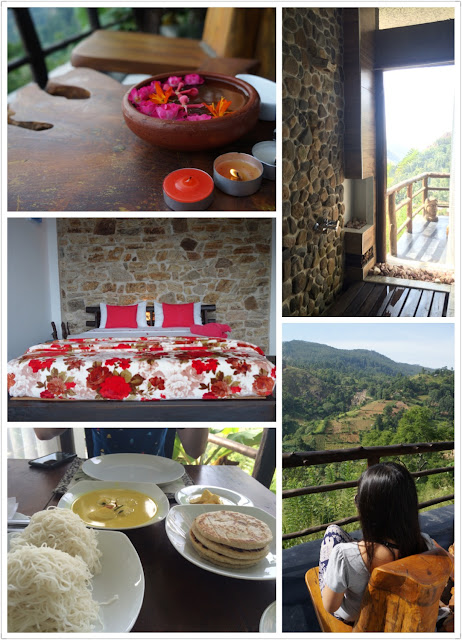 And so we did - a kid showed us the way to climb closer to fall. There was only 1 local restaurant within walking distance of the guesthouse, and it closes quite early as it was in the middle of nowhere. Good thing we had eaten around 5pm and didn’t feel we needed to get back into town for dinner. We left the curtains open at night so we could wake to sunrise, apparently one could see fireflies - I wouldn’t know, think I blacked out the moment my head hit the pillow. 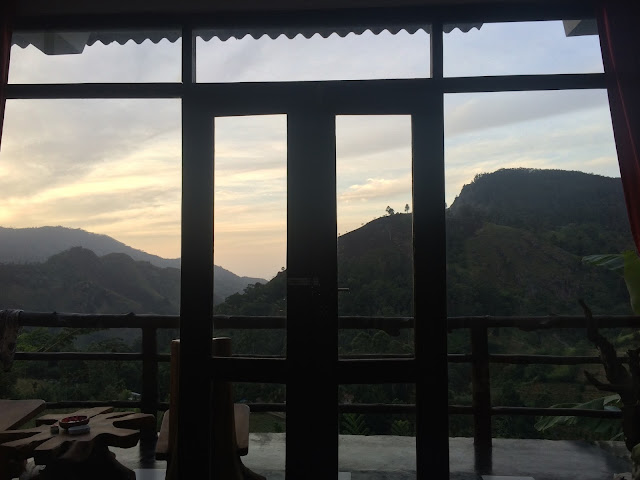 After our delicious string hoppers breakfast on the balcony the following morning, we lounged around before making our way to Udawalawe. There was no direct bus, so we had to change at Wellawaya. It was quite confusing at Wellawaya, some were trying to convince us taking a tuk tuk, while others pointed us to random buses or just a crowd in the bus terminal. So we just jumped on a bus that went to Thanamalwila and hoped to head west from there.

We later found out that we could have waited for the bus bound for Colombo from Wellawaya, as this was the exact bus we had to find in Thanamalwila anyway, where it made a pit stop. We arrived at Nature House just before 3pm, and hopped straight onto the host’s jeep for an afternoon safari with the whole jeep to ourselves. My very first safari too! 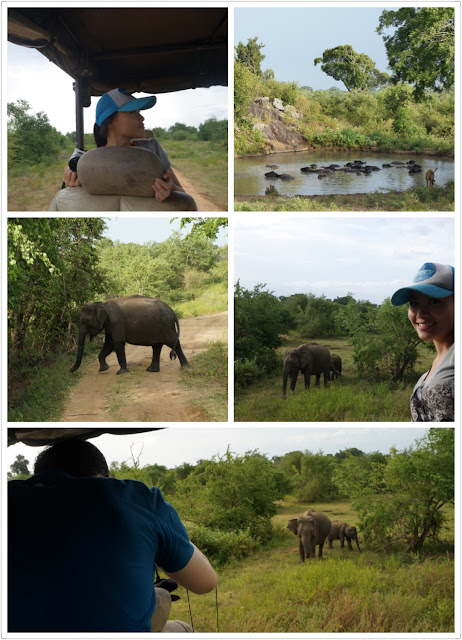 Our driver was remarkable at spotting all kinds of birds and animals. We found plenty of elephants but sadly no leopards. He said the Sri Lankan elephants were more domicile that African elephants, which tended to charge at jeeps. 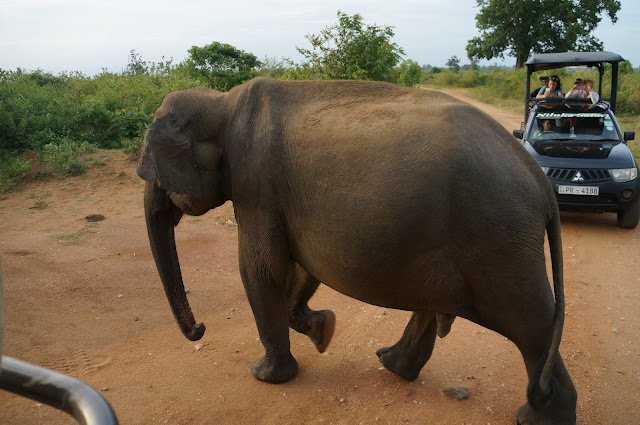 An elephant was just casually strolling across the road as we were leaving the park, as if to say goodbye. There wasn’t much to do in Udawalawe except for the park, only a few local restaurants that served food heavy with salt and MSG in the evening. We tried walking to the village centre on the east side of the road, but gave up after 40mins.

The following day was the Poson Full Moon Poya public holiday, our host warned us about infrequent bus services and most shops and restaurants would be closed across the island. We had to make our way to Tangalle; first to Embilipitiya then changed for a Matara-bound bus.  True enough we’d had to wait for 20mins or so for a bus, and the streets were flooded with people queuing for free food and temples were packed.

We walked for 20mins from the main road to Hideaway Lodge near the beach, and the hope for an ATM nearby was diminishing by the second as it felt as though we were the only people in the Tangalle beach area - low season and public holiday. We had the whole resort to ourselves, actually, we had the whole beach to ourselves. Our host said we had to go into Tangalle town for an ATM - well, with 800 LKR cash to our name, we didn’t have many options. 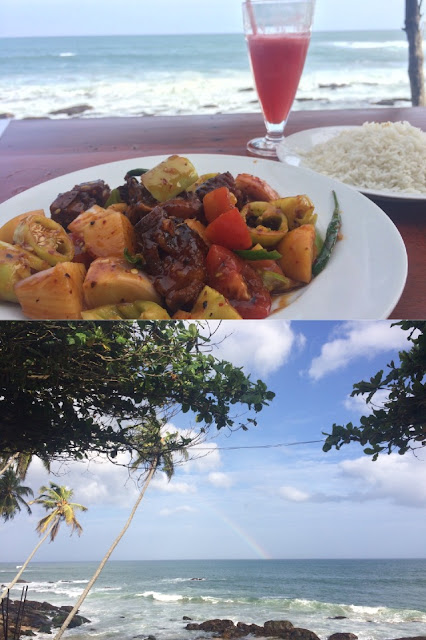 Tangalle town centre was about 5km away. We found a restaurant by the sea for some late lunch and tried devilled fish for the first time. It reminded me of sweet & sour dishes with a kick. We strolled around town and saw the busy temples filled with locals making their offerings of flowers and candles. The locals were most welcoming. There were lots of festive stalls setup all over town, and the locals insisted we try their herbal tea called ‘belimal’, which was very soothing to my sore throat. We even picked up a couple of free ice creams! 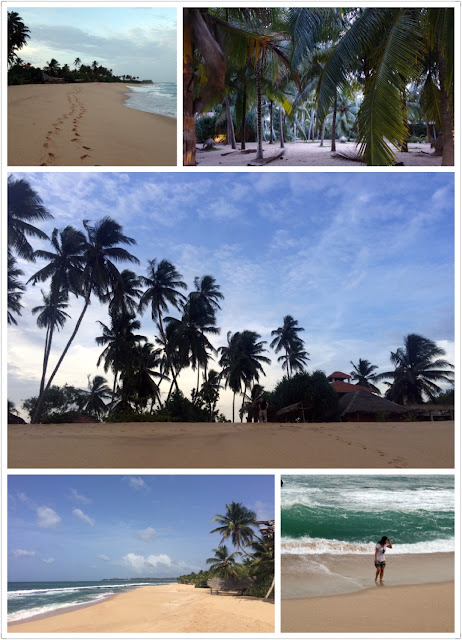 The sun was starting to set when we returned to Tangalle beach. It remained completely secluded. All the hotels and restaurants along the beach seemed to be closed, so we returned to our villa resort for dinner. We were certain food was made to order, we waited for about an hour while the entire villa crew worked away in the kitchen to whip up dinner for us. It was almost like he booked out the entire resort just for us; well worth the wait too as It was one of the better dinners we had.

The beach remained secluded in the following morning, and the waves were still aggressive. By aggressive I mean it dragged me into the sea when I was standing calves-deep in the water. Before I realised what was happening, he was already carrying me away from the waters… I think he saved my life. So with an earful of sand and two pairs of sunnies short, we hopped on a bus to Unawattuna (c. 3hrs).

Weather took a turn for the worse on the bus; it started raining hard and was still spitting when we jumped off the bus. We tried to find something to eat in Unawattuna town, but the only one we found was genuinely horrific. I went through the kitchen to use their toilet and it was impossible to see where the trash began and the food began; it was likely walking through a thick cloud of flies with visibility of half a metre. We just paid for a fanta and ran out of it. Eating at the guesthouse was a much safer bet. 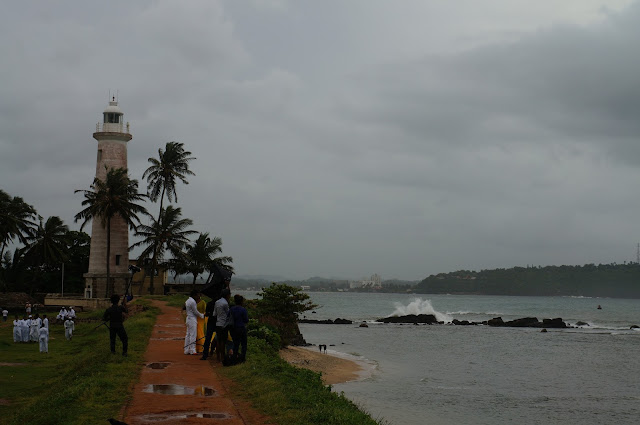 We spent the afternoon walking around Galle Fort. There wasn't much to see… the museum of old things was quite cool though.

It was an early start to the airport from Unawattuna. The express bus left Galle at 6:30am, got us to Kadawatha. From there a local bus for 30mins to Wattala and then Bus 187 to the airport. It was a good 3.5hr trip. This itinerary took the express way on the initial leg, saving 45mins or so. Alternatively we could have taken the local bus to Colombo Fort for the first leg, then change for the Airport Express Bus that takes the high way to the airport. We were worried about traffic near Galle in the morning though.

Even after 11 days in Sri Lanka, I can’t articulate any highlights that the country has to offer - I am not sure if there is any. I felt the best part of the trip have been the bus journeys on the various third-hand buses, even better when it’s not blaring with Sri Lankan music. The people had been incredibly hospitable, genuine and kind, we were greeted with friendly hellos everywhere, and most of the people we met were helpful with honest answers instead of trying to con us into a tuk-tuk. This alone made the trip enjoyable and stress-free. 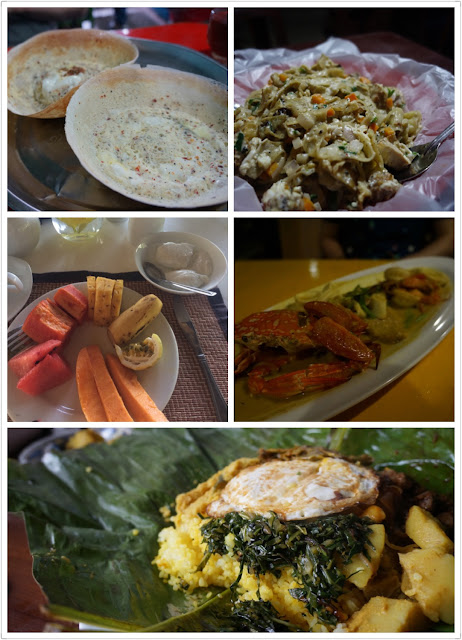 And as always, he made the trip wonderful. While the country itself is not particularly romantic, the pure solitude of travelling in low season had a natural charming air to it.

Thank you for looking after me. And saving my life.