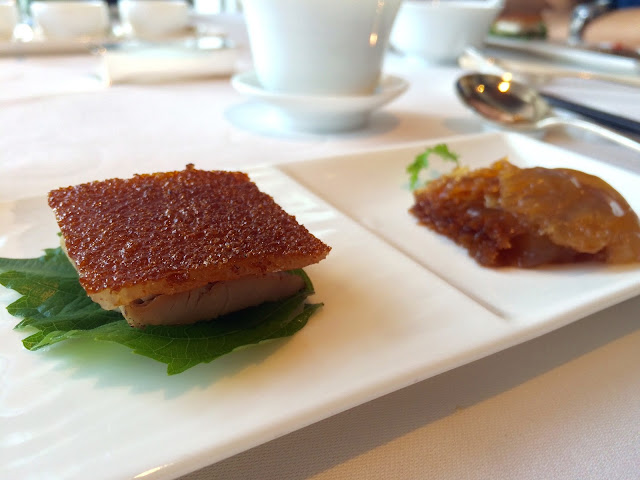 As part of 'Project Surprise’ for Papa Chan’s birthday, I booked lunch at the Michelin 3-Star Lung King Heen. Saturday lunches were booked out 3 months in advance, I managed to squeeze in a Friday reservation.

We were taking in the panoramic view of the harbour as our server introduced us to the menus and served us tea. The dim sum options were relatively limited on weekdays, so we all opted for the business lunch menu to sample a wider spectrum of dishes. 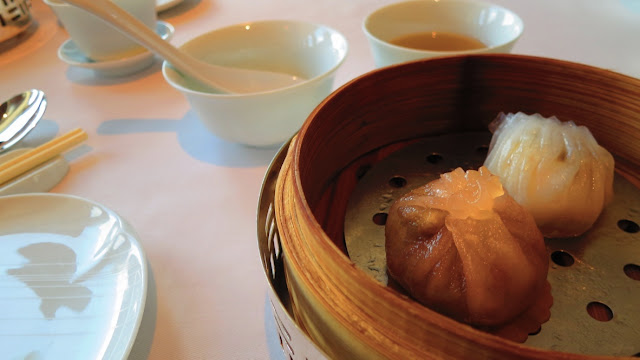 The prawns were full of bounce and crunch with subtle hints of fungi juice, enveloped in a springy shell. The goose dumpling was remarkable with structured layers of flavours, bursting with gamey flavor that was complimented by fragrant nuttiness and soft bits of pumpkin. 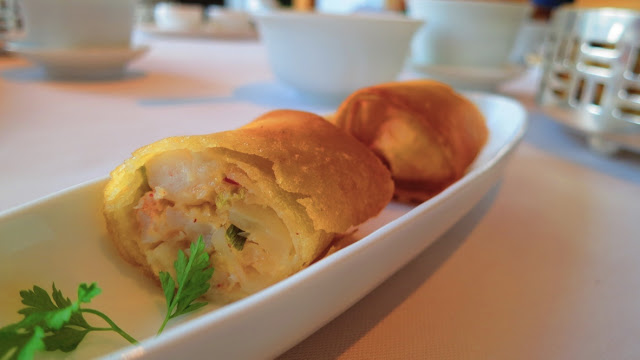 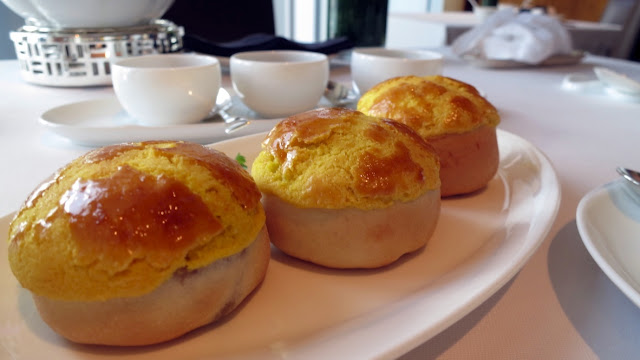 We added this as a side order as this is Papa Chan’s favourite. The buttery cookie crust was delicate and crumbly, its sweetness was quickly balanced by the rich barbecue gravy – an impeccable harmony of sweet and savoury. The roast pork was lean but tender, beautifully paired with the soft crunch from pine nuts instead of pork fat. 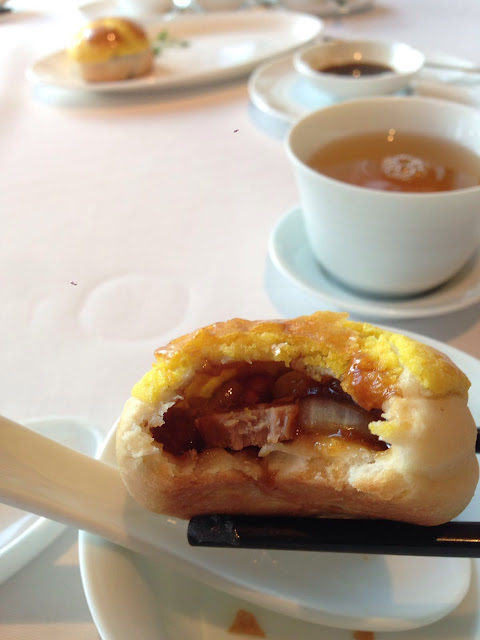 I have had some pretty epic baked bbq pork buns in Hong Kong, including the ones from Che’s and Hotel Ikon. This one from Lung King Heen though, is in a league of its own.

Soup of the Day 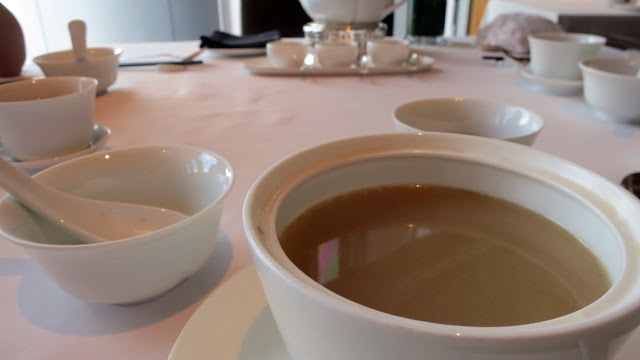 I love Chinese soup, any Chinese soup. This was Snakehead (fish) soup, delicacy that gives a slightly gelatinous texture to the soup.  The broth was immensely rich and packed with savory goodness. 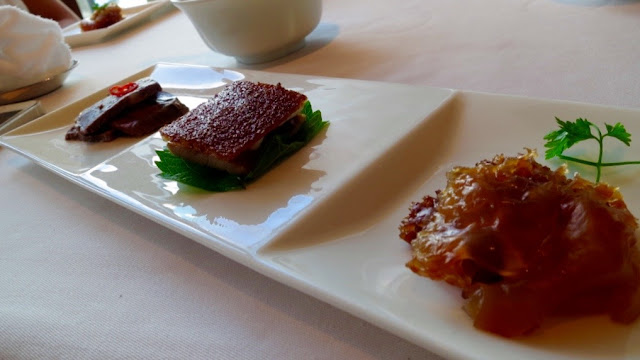 It was a blissful mouthful of suckling pig. There was a thin slice of pancake wedged between the fragile crispy skin and succulent pork meat, smeared with a thin layer of hoi sin sauce, which mingled with the meaty, nutty aroma from piggy grease. Supple slices of beef shin slices were laced with soft springy tendons, giving them a playful mouthfeel. The jelly fish had a moisten crunch, lightly marinated to retain its cleanness. It was a delightful trio showcasing iconic Cantonese delicacies at its best. 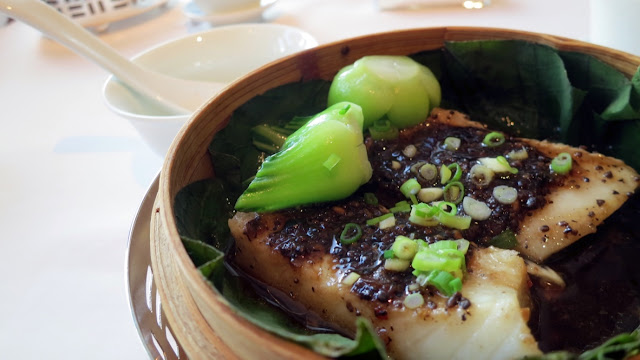 This was exceptional – the sea bass fillet was steamed to absolute perfection; milky and slithery, the fillets flaked away with the softest touch, but was firm enough to hold its shape before dissolving in mouth. First it was the pungent, but not overly salty, fermented bean sauce that was reined in with sweet soy sauce. Then the freshness and sweetness from sea bass fillet came through, a wave of fragrant fish oils seeped through my taste buds and lingered longer after. I didn’t know sea bass could be so sensational.

This is the best fish dish I have tasted to date. 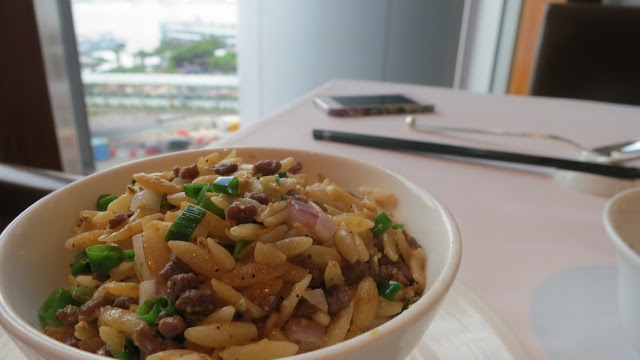 There was an interesting element of fusion where traditional rice course was replaced by pasta. The softer and slightly doughy texture of pasta went well with the peppery beef. The relatively light and greaseless finale was a great finish to the indulgent meal.

Noodles with Minced Pork and Chili in Soup 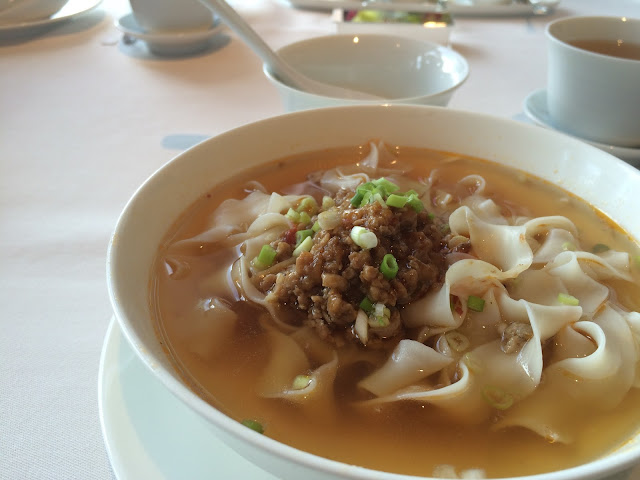 The alternate option to pasta was noodles, which were like ultra-thin dumpling skin. The flat translucent noodles were silky smooth in a clean broth with Sichuan pepper aroma minus the heat. 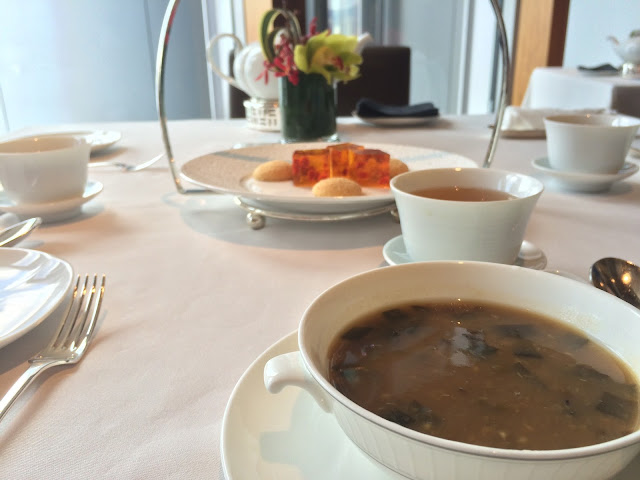 Papa Chan gave this two thumbs-up. It was a traditional dessert done astoundingly well; the sweet soup had a slightly grainy feel as the mung bean skin broke from slow-cooking, with strips of jelly-like seaweed. 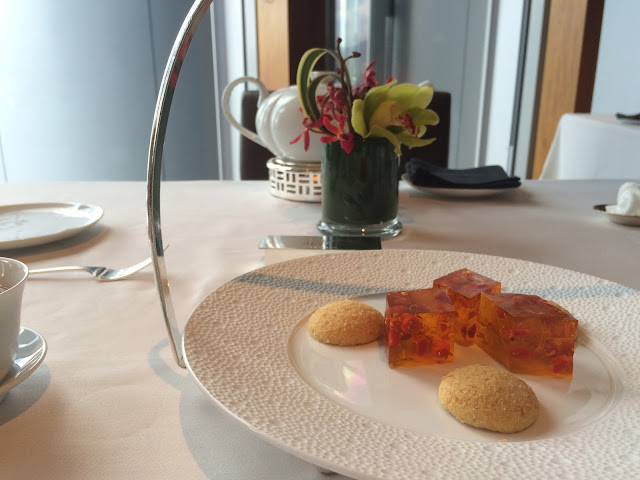 As the world’s first 3 Michelin star Chinese restaurant, ranked 20th in Asia’s Top 50, Lung King Heen was beyond expectation. Each course was meticulously prepared to impossibly high quality, taking ordinary Cantonese fare to a new level - even seemingly simple dishes oozed finesse and sophistication. It was flawless, from start to finish.

Most importantly, Mama and Papa Chan loved it.