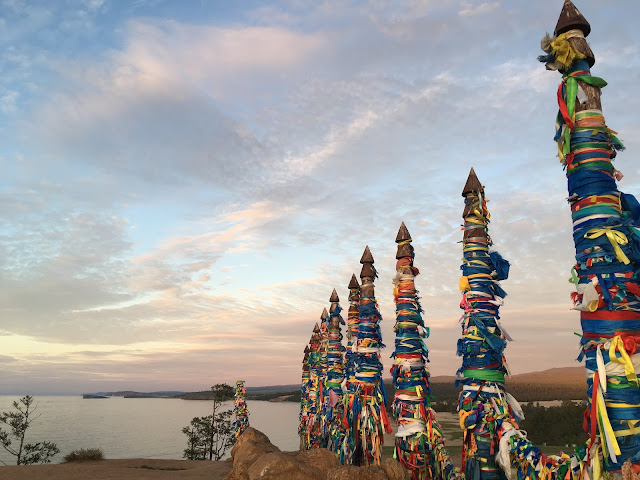 *If you read nothing else from this page, take this away: Bring CASH to Olkhon Island*

Irkutsk is a major town along the Trans-Siberian railway. I booked a hostel in the downtown area for easy access to the Olkhon-bound minibuses. Bus 480, 80, 90 and 3 all cross the bridge from railway station to downtown, 15 rubles one way. It was getting dark, so I just picked up dinner from the supermarket while I was stocking up. I think I got a bit carried away… the deli counter at the supermarket looked so appealing and prices were cheap. I bought salmon caviar (ikura), all kinds of fish and a few salads. The lightly cured fish was addictive - I went back and bought another box. It was a feast! 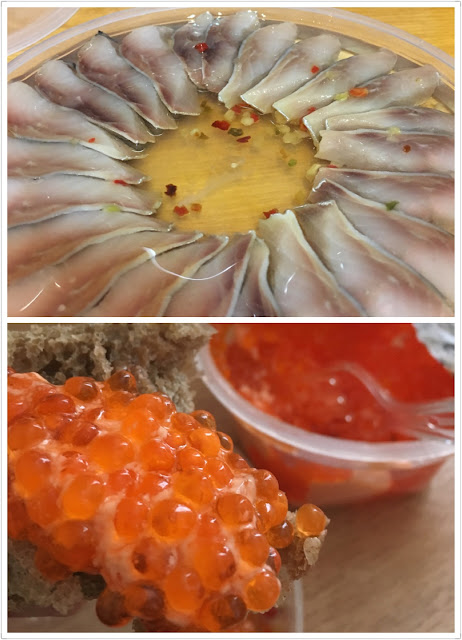 There are two types of minibuses to Olkhon Island from Irkutsk: public ones that leave from the Central Market bus station (500 rubles one way) or private ones that do pick-ups from your accommodation (800-900 rubles one way). All of them leave before midday. The journey takes around 5-6 hours; first 4 hours on the road, followed by a 15-min ferry and finally 45-min drive on the island to Khuzhir on much more bumpy sandtracks. I arrived at my guesthouse just after 4pm, plenty of time to check out Shaman Rock by the lake. 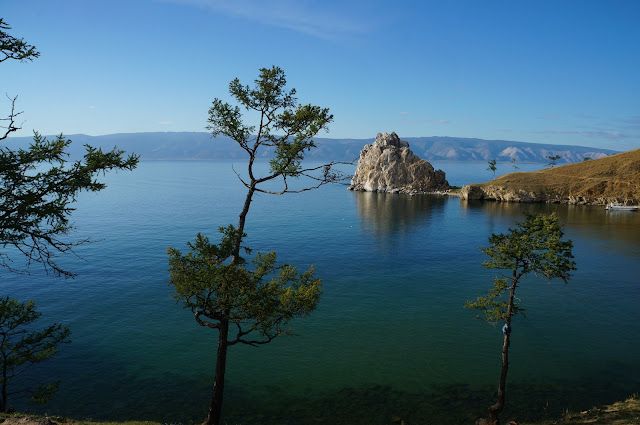 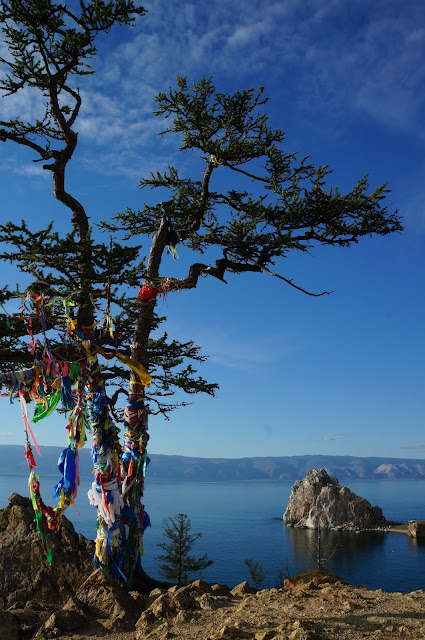 Nikita is by far the most popular hostel in the village, so much so that it’s more of a landmark and much more useful than the official tourist information desk. That said it’s usually booked out months in advance, but I heard they can refer you to somewhere nearby if you just turn up. The staff speak good English, which is hard to come by here. 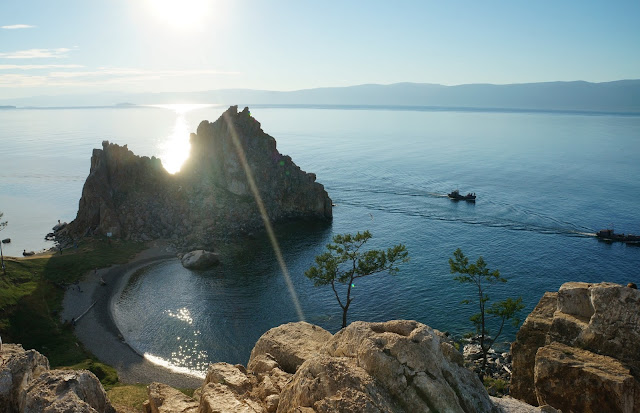 While waiting for sunset at Shaman Rock on Olkhon Island, I got chatting with this South Korean guy called Chansu (Chance). He was crazy enough to buy a bike from Shanghai and cycled his way to Irkutsk via Beijing. Didn’t take him long, only 45 days. His target was to reach Lisbon by Christmas and definitely get out of Russia before winters hits properly. Hopefully see him around November in London. 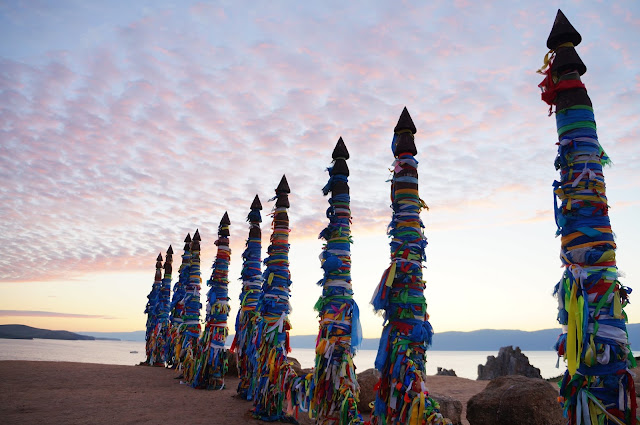 The following day I signed up for a day trip to the north side of the island. To be fair, all visitors would have signed up for it. The alternative options were a day trip down south or a boat tour on the lake, but the north was most popular - 1000 rubles for the day including lunch.

Weather wasn’t great in the morning, but there was something eerily beautiful about the mist hanging on the mountains on the other side of the lake. 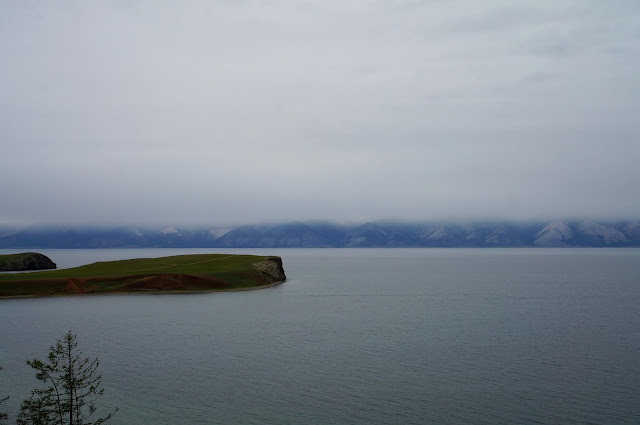 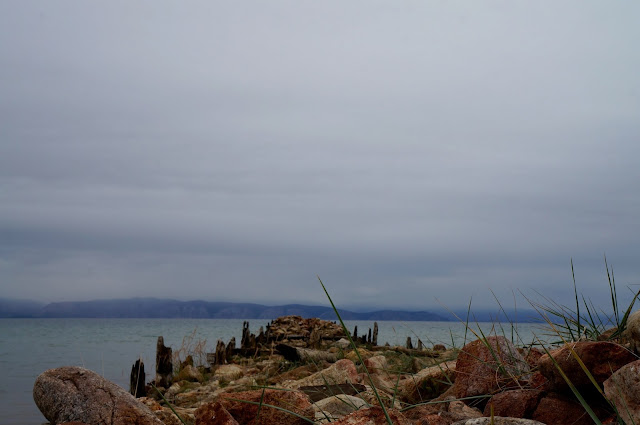 We made 2 stops along the coast before entering the National Park area, everyone had to pay 90 rubles and they guards do not give change. The word ‘bumpy’ doesn’t even begin to describe the ride… stick to a light breakfast.

The clouds were starting to thin when we arrived at Sagaan-Khushun Cape, aka Three Brother Rock. The myth was that a man with supernatural powers granted his 3 sons with flying abilities as eagles under the condition that they were not allowed to feed on dead animals. But the 3 brothers couldn’t find live animals after flying around, and ate a dead horse. Their fathers got angry and turned them into rocks. 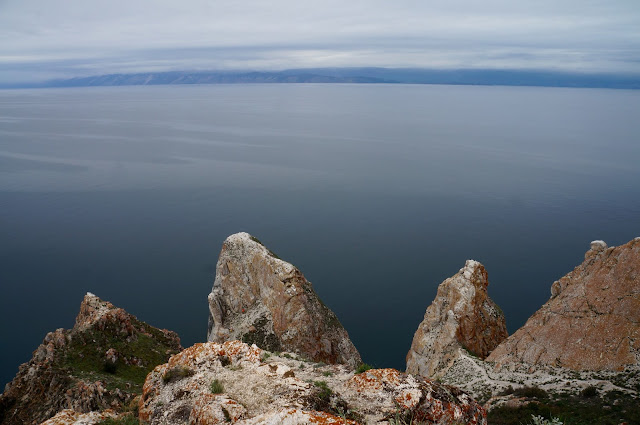 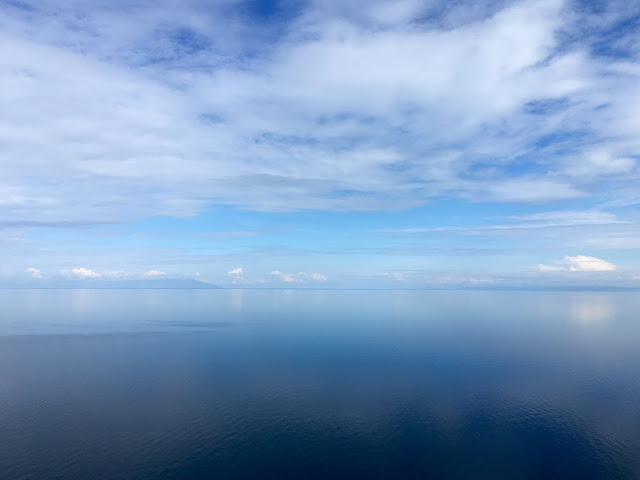 Further north we arrived at Khoboy Cape, where the rock was in the shape of a fang. The skies were blue and the reflection on the still water was perfection. We had an hour to stroll around as our driver prepared our picnic lunch. 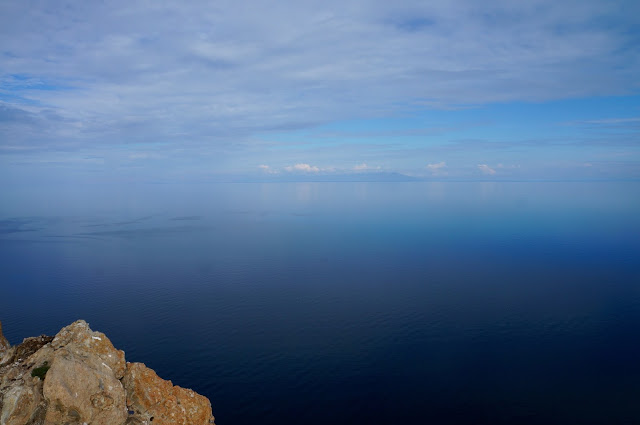 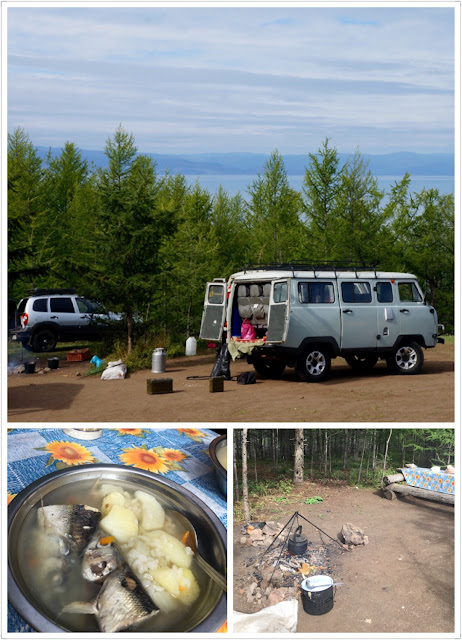 Lunch was fish soup with potato and rice, served with bread and tomato salad. Our driver did a great job cooking with an open fire. Perhaps I was hungry, but it was really tasty, and it was very atmospheric eating by the woods, overlooking the lake. 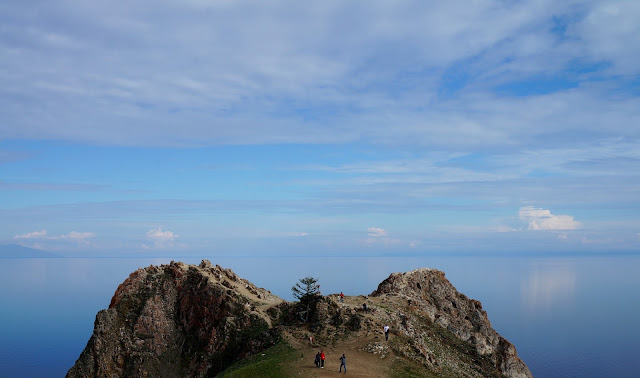 After lunch we made a stop at the 'love rock'. The rock is in the shape of a heart, some may say it’s the shape of women’s breasts and people pray for children on the rock; the left side for a baby-girl, right for baby-boy.

Our last stop before heading back to Khuzhir village was a valley where we could take a dip in Lake Baikal. The water was safe to drink and it was refreshingly cool. I wasn’t brave enough to enter the cold water though… The simple settlement was for people working in the station that monitors seismic activity in the area.

There were a few local tourists among our group. They showed us the massive mushrooms in the woods, and led us to mushroom-picking as a side expedition. They were huge and smelt great. 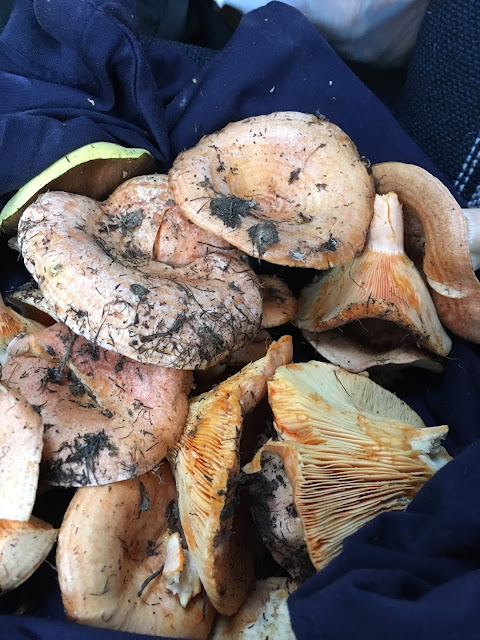 As I mentioned above, there are no ATMs or banks on the island. As of September 2016, the Post Office and the pharmacy along the main road (Baykalskaya ul.) are the only 2 places that run a mini-bank service for 150 rubles handling fee, you’ll need your passport and they will fill in a load of forms. Still my card got declined. Both close at 5pm and the PO is closed on Wednesdays. There is also a trailer truck in the Internet Cafe yard that apparently do cash withdrawal with a 10% commission, machine was broken when I visited. As with most guesthouses here, mine only took cash and I was 2000 rubles short after paying for the day tour. Having ran around the village begging for cash from all the shops that accept cards for merchandise only - I was running out of ideas.

Then I heard someone calling me from across the road - my saviour. I met this gentlemen when we were waiting for the ferry on the previous day, he was on his annual trip with his group of friends. I think he recognised my shocking pink trainers from afar. He found it amusing that I was distressed over 2000 rubles (£20), and offered to lend. Knowing he has another few days on the island and lives in Australia, paying him back won’t be easy. All I could offer was HK dollar notes! These are useless to him and it wasn’t even a fair trade of rates, but he gracefully accepted. I even got to meet the rest of the crew over white wine and beer. I’m so grateful for his kindness, there are no words. 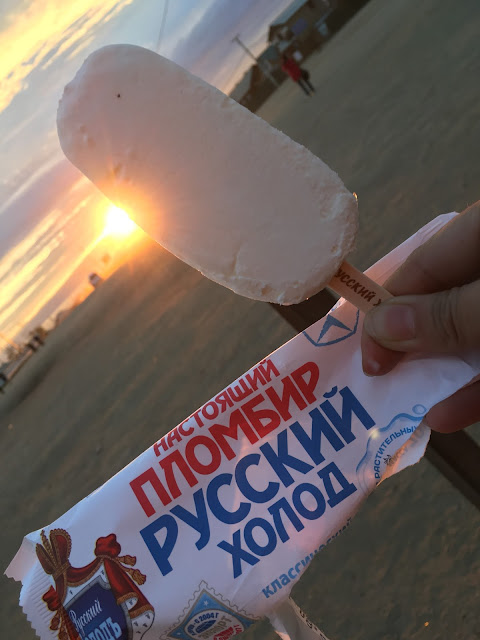 The drive back to Irkutsk was uneventful. I spent the afternoon exploring bits of the town after sending my postcard. 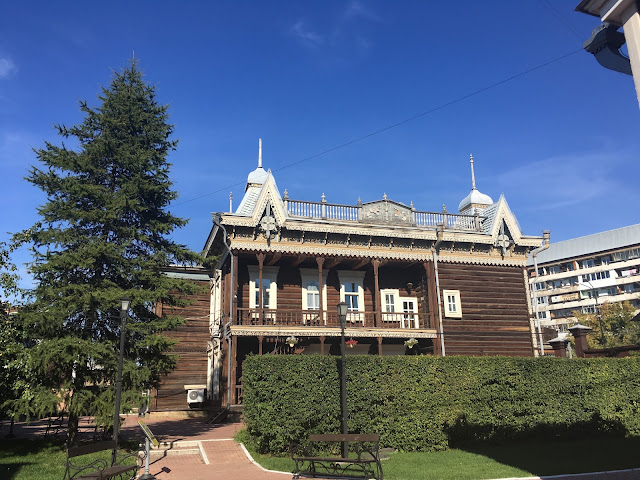 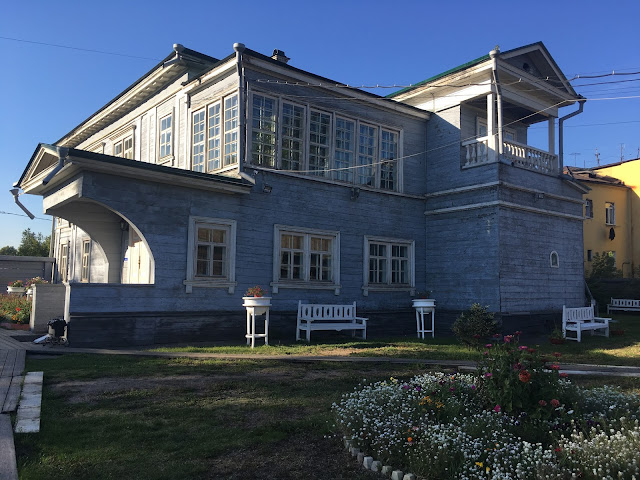