Hunan - Much Ado About Nothing 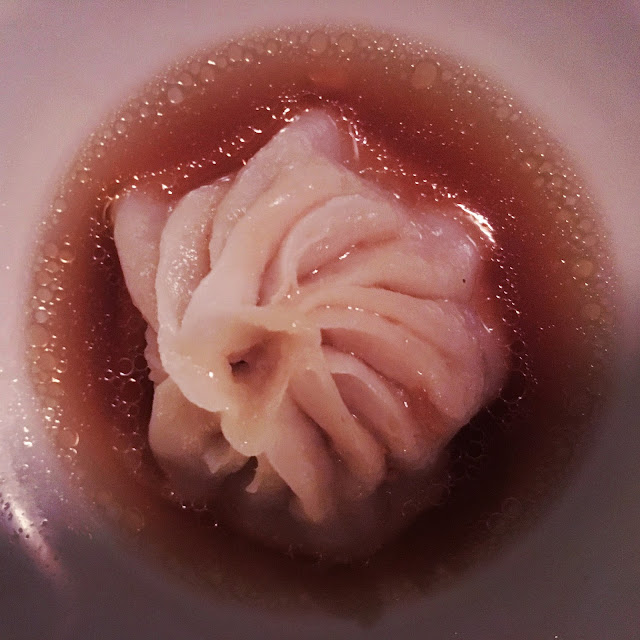 Hunan is one of the those places that fellow foodies say it’s a hidden gem, yet we don’t hear much about it. We just knew that it had no menu. The man decided his birthday dinner with the family was about time to unveil the secret of this shh-I-don’t-want-to-tell-people Chinese restaurant in Sloane Square.

Despite its name, Hunan is owned by a Taiwanese chef. The cuisine is a combination of Cantonese and Taiwanese and chef send tapas-sized dishes to the table until his guests are full. With proper Chinese efficiency, we were presented with a wine list and tap water just as we sat down. After we confirmed there's nothing we don't eat, we were promptly brought our first course. 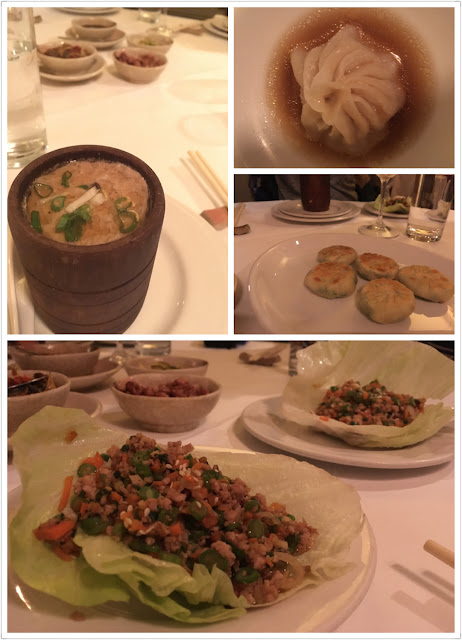 The chicken broth with steamed minced served in a bamboo cup really hit the spot; it was piping hot, packed with meaty essence and moist pork. Next came a lettuce parcel with minced chicken and vegetable, pretty standard fare, and chive and turnip potskticker. The potstickers were pan-fried to give it a crispy shell, but came short on the filling, could have jammed in much more chive and juice to make it less doughy.

XiaoLongBao was served in a small pool of chicken broth infused with black vinegar. At this point, my expectations for Hunan had re-baselined to Westernised Chinese cuisine. The quintessence of XLB is the art of wrapping soup in a soft delicate parcel that bursts and fill our mouths with savoury delight. Having the sac sitting in some sauce is just XLB failure; like someone with poor chopstick skills had poked through the thin dumpling skin and caused leakage. I couldn't tell if there was broth inside, the effect was lost in the construction; If the broth is outside, it's called wonton! Not to mention I don't usually add vinegar... 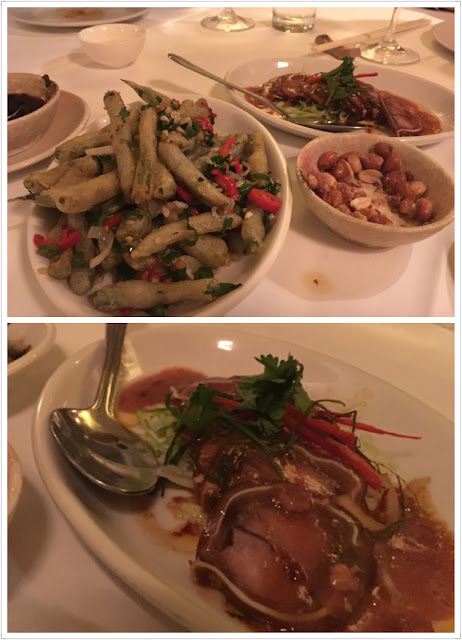 The next two dishes were pig ears and crispy garlic and chilli beans. The beans were very moreish, deep-fried and mixed with generous amount of garlic and pepper salt. The group did well to sample the gelatinous pigs ears, though the springy texture and the brittle rind of soft bone was not to everyone's taste, especially served cold. 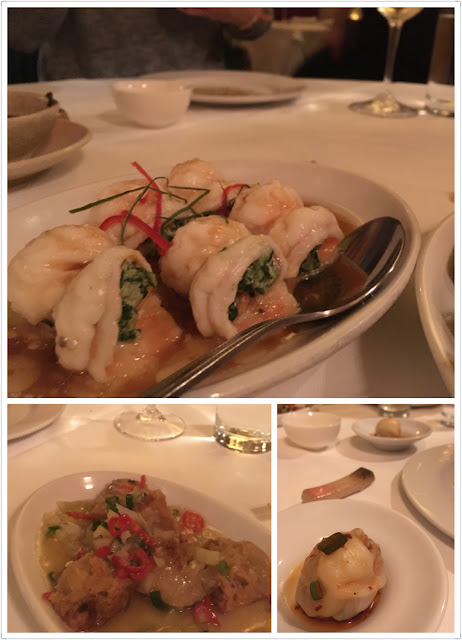 We continued to be bombarded with torrents of dishes. Next came a range of dumplings; the beancurd ones reminded me of a type of dim sum with crunchy veg and water chestnut wrapped in a thin sheet of beancurd, soaked in a thick gravy glaze. It was nice. The prawn parcels skilfully wrapped a small bunch of chopped vegetable, bouncy and crunchy. The quail egg siu mai was nothing like a siu mai, it had too much overcooked sticky rice that made it horribly mushy. 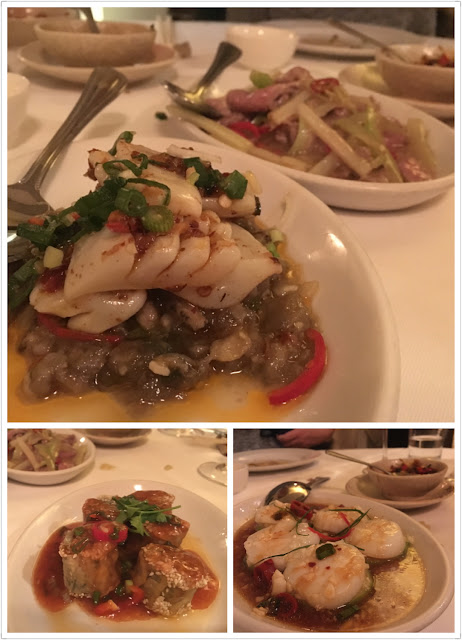 Then we were moving into the main course territories. The squid with roasted aubergine was one of the worst of the evening; the two ingredients could have been two completely different dishes. Though the squid was just-cooked to retain its tenderness with some chew, when paired with the mushy aubergine, the two clashed terribly both in texture and flavour. The celery and lamb slices failed to spark any chemistry too, despite the manager explaining it was some special Welsh lamb. The scallops certainly looked better than they tasted. The seemingly intact scallop was assembled by thinner slices, so although silky and slithery, it lacked the creamy meatiness I anticipated. It also had a hint of acidity in the aftertaste that might have came from the soy sauce. 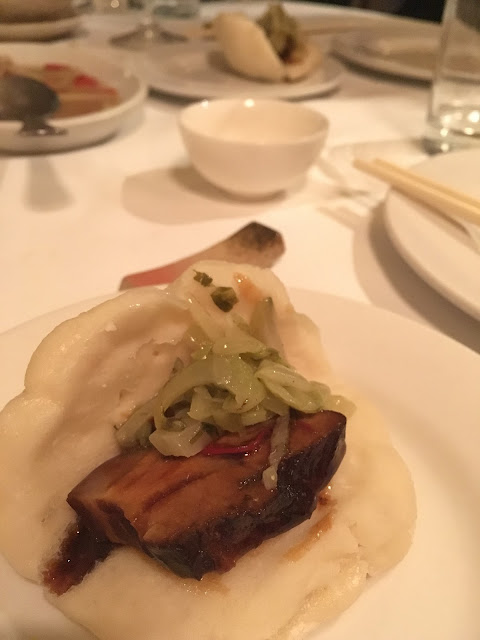 The hirata buns were quite good, a wedge of soft juicy pork belly sandwiched in a moist and fluffy steamed bun. 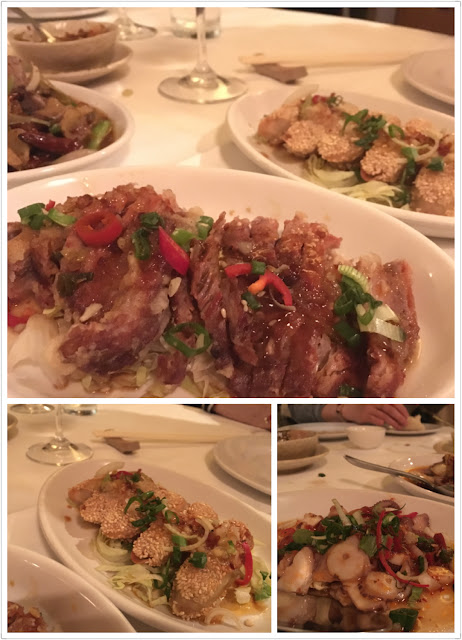 The warm octopus salad was quite good with sliced tentacles, chopped onions and scallions with a light soy dressing and a citrus tone. The sichuan spicy beef in the back was unremarkable, the heat from a handful of chopped chillies was one-dimensional with little structure, like any other chilli beef dish one’d get in Chinatown. The breast of lamb, however, was excellent; finally something we found impressive. The melt-in-mouth lamb was coated in a delicately thin batter, topped with a sweet chilli glaze, we nodded approval as the distinctive fragrance from dissolving lamb fat seeped through our tastebuds. The taro croquette was average, a bit bland and unexciting. 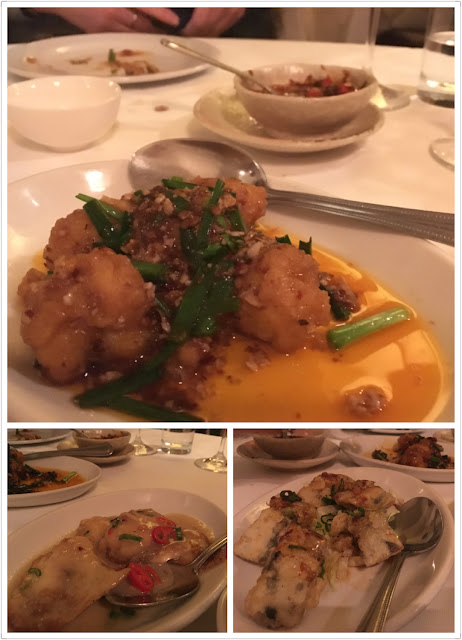 I recall there were frog’s legs in one of the dishes, but frankly 20 dishes in, I was starting to lose track of which is which. It didn’t help when most serving staff only mumble a couple of words about each dish before dashing off; the maitre’d had to run around to re-introduce half-finished courses. On a couple of occasions, what the maotre’d said was completely different to the server. So this glowing orange dish could have been frog’s legs or chicken - one or the other. The egg roll was generally unpopular as it consisted of preserved duck egg which gave off a pungent salty punch. I thought the fish fillet was excellent, finished with a slightly sweet fermented bean sauce. 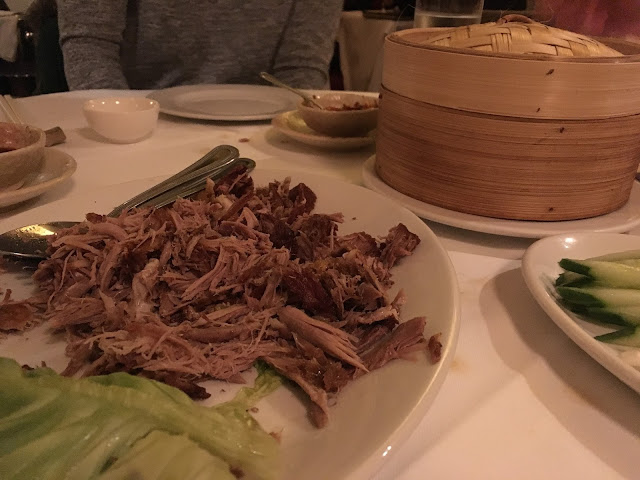 We finished off with the classic crispy duck pancake. No surprises here; shreds of deep-fried duck leg with a dollop for hoisin sauce and cucumber, wrapped in thin pancakes. I prefer peking duck.

Dessert was simply banana fritters served with vanilla ice cream. It was more of an after thought, as we brought our own cake for the birthday boy.

Think we ended on 23 courses; a couple of dishes were very good, most were passable and a few borderlining offensive.

Hunan was somewhat overrated. The ‘tasting menu’, wine-pairing option and posh location gave the impressive that Hunan was an up-market and elegant establishment, yet the slightly chaotic ambience and lukewarm service suggest otherwise. It wasn’t fine-dining, like Hakkasan, HKK or Min Jiang, as there was nothing extraordinary about the ingredients or recipes. It was just the usual dishes from a regular Chinese restaurant served in smaller portions. After a while the flavours and sauces repeat themselves. We jokingly said chef had probably prepared everything in small packets and the kitchen just pop them in the microwave every few minutes for service.

Was it awful? No. Just wouldn't recommend it for anyone that knows their Chinese food.