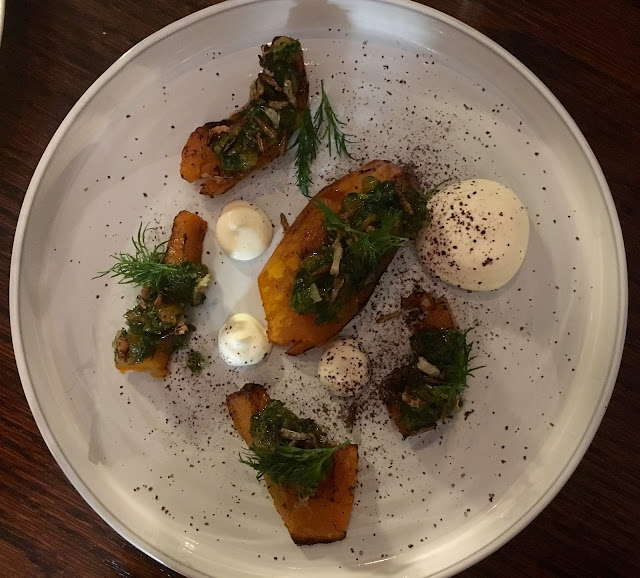 Originally I wanted to try Portland but he has already been earlier this year, so I booked for newer sister Clipstone. I didn’t know what to expect, but reviews have been mostly positive.

The compact dining room was casual with a warm buzz; the open kitchen was sending out waves of mouth-watering perfume as we were seated at the window counter. Our server explained the menu was designed for sharing, so 2 or 3 dishes each should be enough. I started with a light and fruity Cherubino, one of the very wallet-friendly on-tap options, and he with a Chateau Pesquie, probably too acidic for his taste. 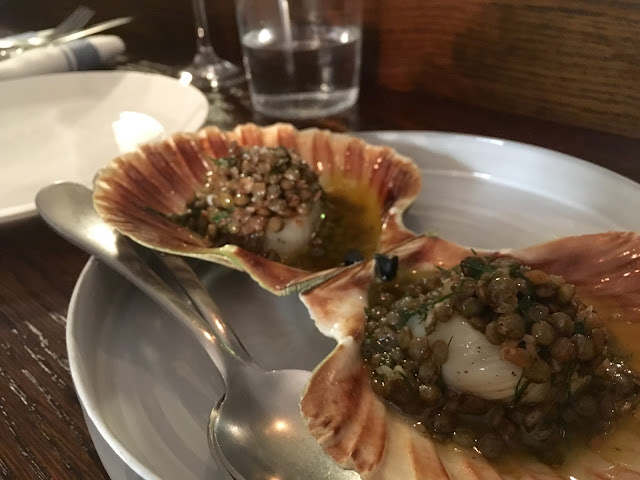 The scallops were gignormous; easily 3cm thick. The muscular scallops were just cooked to retain its bounce and succulence, showing off its sweet juices and freshness. I secretly wished it could be a tiny bit undercooked, so the centre would be more creamy. I remain undecided as to whether lentils go particularly well with scallops, but the brown butter sauce and lentil combination was definitely a winner. 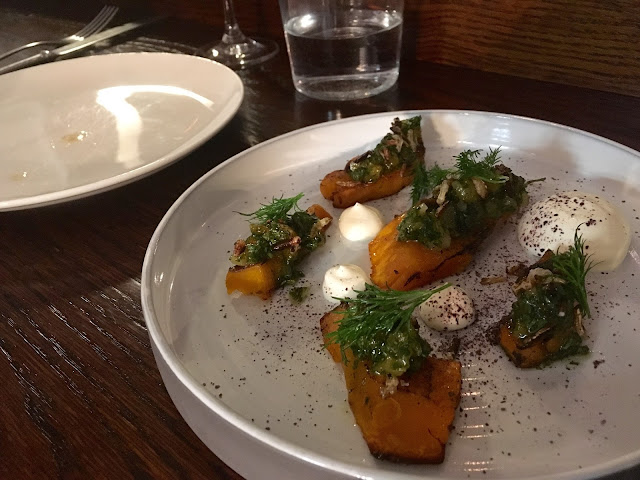 The squashy wedges of pumpkin were topped with chopped tangy apricots. The morsels of fruit bursted with refreshingly citrusy juice that balanced well with the pumpkin sweetness, harmonised by small blobs of sour cream. The roasted herbs added a beautiful finishing touch for a wholesome after taste. 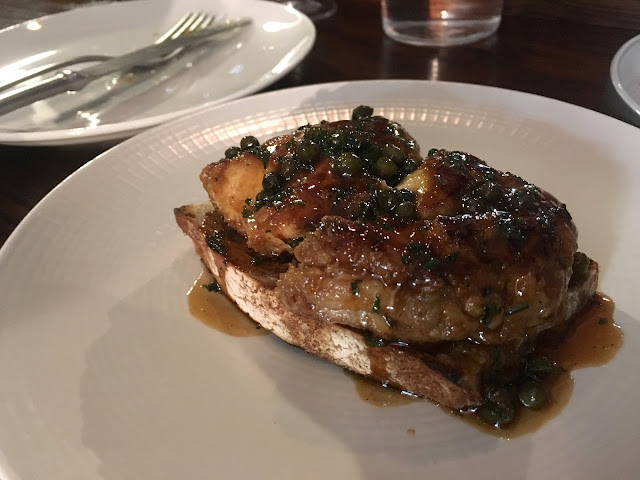 The brain was wobbly soft and silky, not dissimilar to a thick block of Japanese tofu, perhaps just with slightly higher density. Its milkiness mixed with the rich bovine gravy that had a gelatinous finish was absolutely delicious. I loved it. 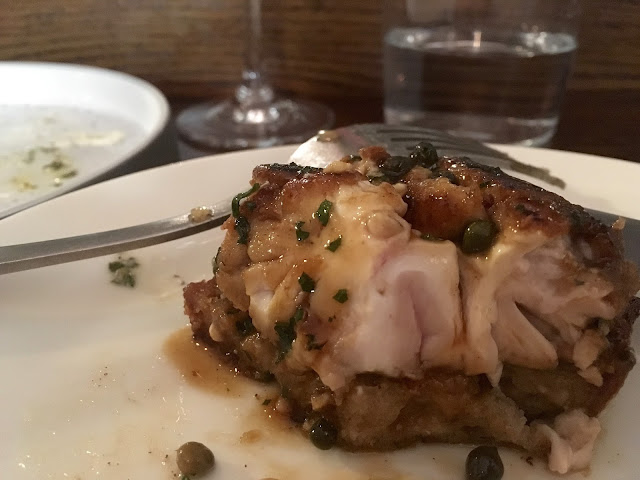 Our waitress explained this dish divides people - It's all in the head (pun intended). He struggled with the idea and was visibly reluctant to put the brain-loaded toast into his mouth.  The fact he had to convince his own brain that it was tofu to stomach it wasn't worth the effort. 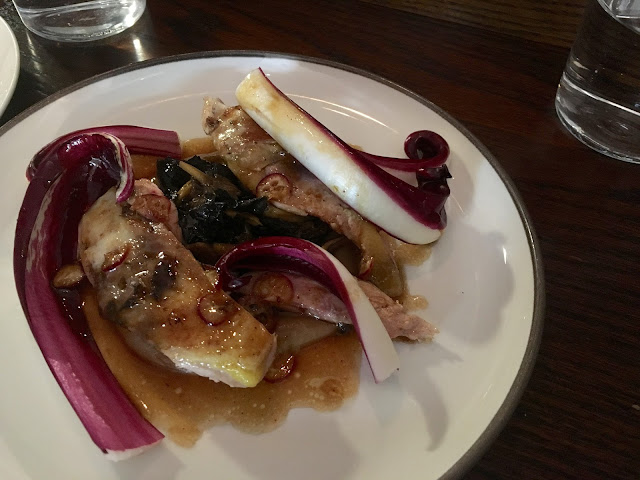 We were offered pheasant or Guinea fowl, we opted for pheasant as it's more gamey. The meat was perfectly roasted to gentle softness, but extremely powerful in flavour, even mildly metallic, paired with earthy and aromatic girolles mushroom and rounded by a savoury meaty jus. It was one of the best winter dishes this year. 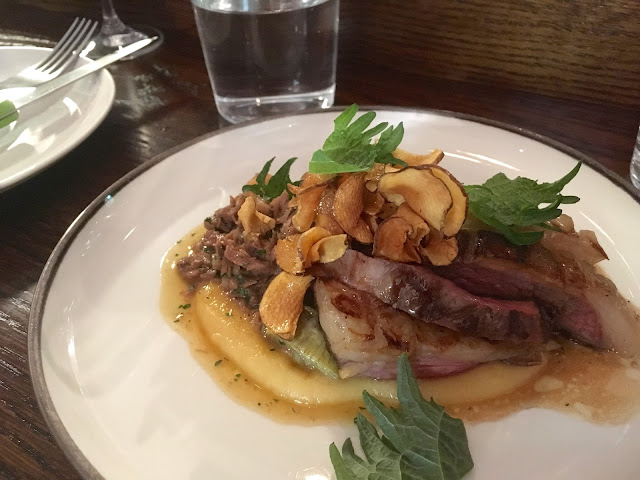 The lamb was sensational. The meat was blanketed with a layer of fat that gave it a distinctive fragrance. It was roasted to a beautiful medium pink, glistening in its juice and melted grease, remarkably tender as if it was lamb marshmallow.  The confit on the side was almost as impressive,  packed with meaty essence from the leaner cuts, paired with a velvety parsnip root purée, which was clean and mildly sweet like celeriac. It was a delicately balanced dish. 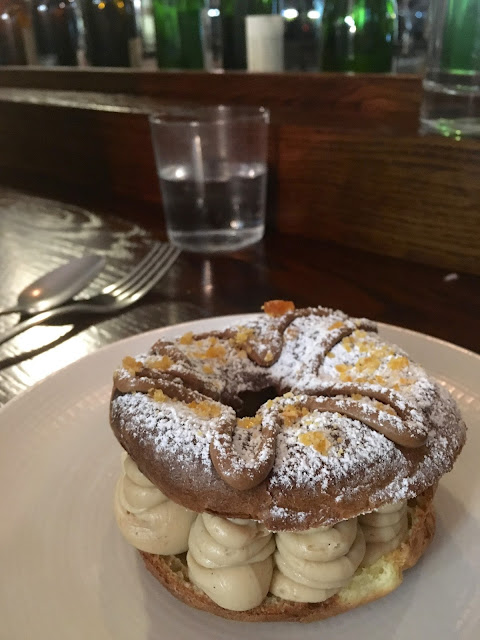 We knew the Paris Brest wouldn't be as good as the one from Les Reves de Patisserie, but it didn't disappoint either. The choux pastry was slightly doughy and lacked a brittle crisp shell, but the thick layer of hazelnut ganache made up for any shortcomings of the pastry; it was airily smooth and oozed nutty perfume. Great finish.

We thoroughly enjoyed Clipstone, so much so that he said he'd happily eat here every week (though he quickly backtracked to every month), minus the brain on toast. The dishes were thoughtfully composed with a wide range of ingredients, all beautifully balanced. We agreed it was one of the best restaurants in 2016.

You may also like: Paradise Garage, The Manor, The Frog
at 00:37