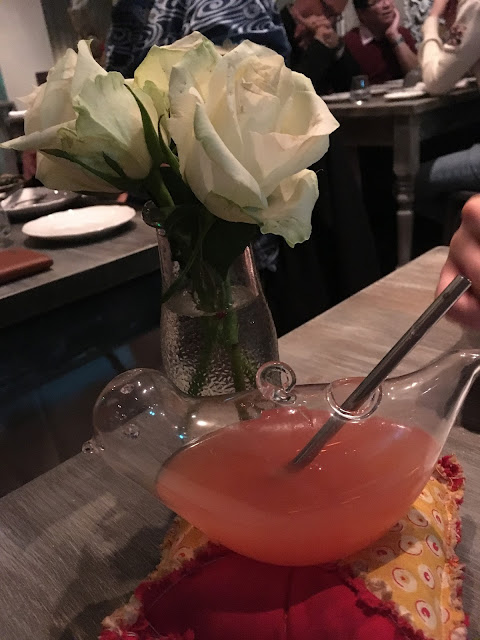 I was craving for something quirky, so when Lokhandwala was offering 50% off for their soft launch, I was quick on the reservation.

Lokhandwala is at the quieter end of Charlotte Street, slightly further from Bubbledogs. The small dining room was adorned with large wooden frames and rusted mirrors; it had a shabby chic feel to it. We were recommended 4 or 5 ‘tapas’ and a main to share. I felt I deserved a cocktail and went for the Like a Bird. It arrived in a beautiful cage with a bird-shaped container that held the fruity drink. It came with a little cushion for the bird to sit on too. It was adorable, and delicious. 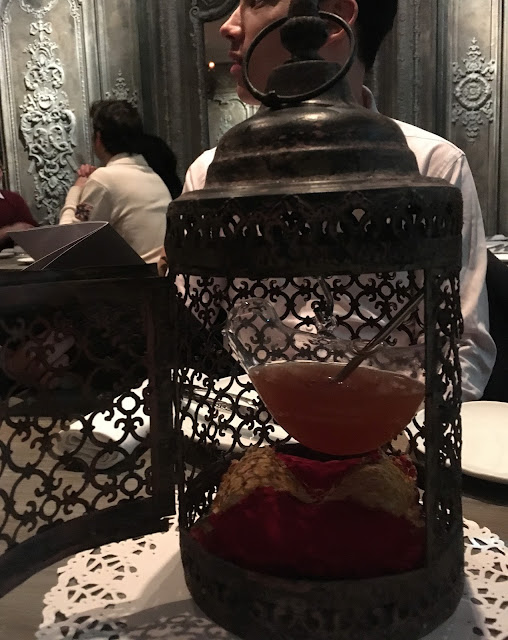 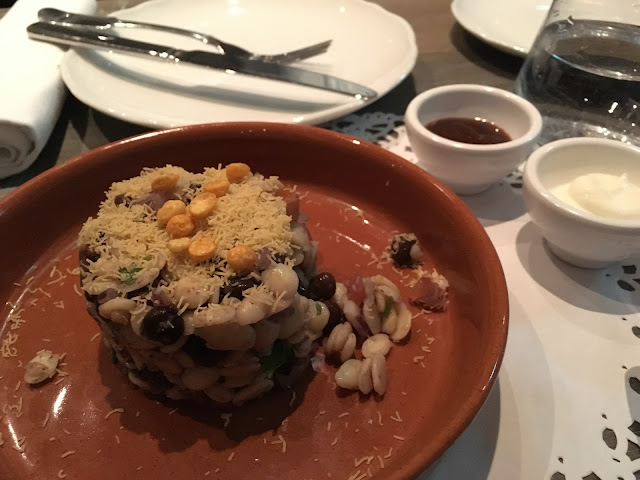 Things didn't start too well on the food side. This daal chaat excuse of a dish could easily be as the most underwhelming dish of the century. It's literally a pile of cold boiled beans and lentils, served with sour cream and spicy barbecue sauce. I wish I could say there's more to it. 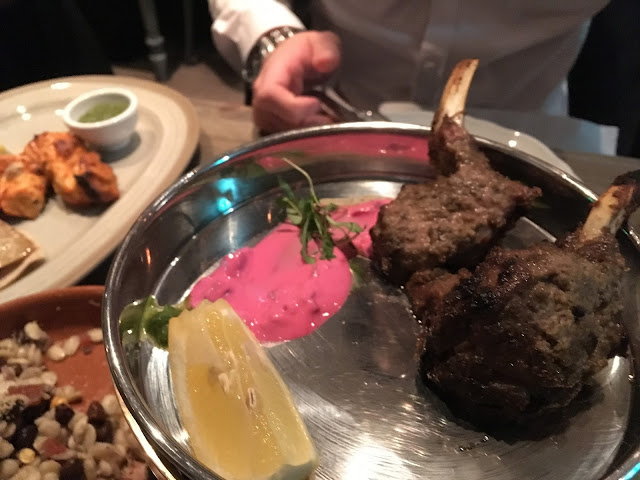 When people complained about the lamb chops at £14, I shrugged and thought Barrafina and Kitty Fisher are charging about the same. Then I get it when the lamb lollipops arrived on a tea-candle warmer pot, next to a puddle of shocking pink goo. Chef - the melted bubblegum look isn't good.

The lamb itself wasn't bad, reasonably tender, coated with pungent spice and herbs. I quite enjoyed it - mind you it's not Tayyabs chops. Problem was they looked like someone had already eaten half the meat and we had the last bites served on a metallic pot with lots of space - as you could see from the blurry photo (coz I was shaking with laughter), the bigger piece was the size of the lemon wedge. And at £14, that's criminal. 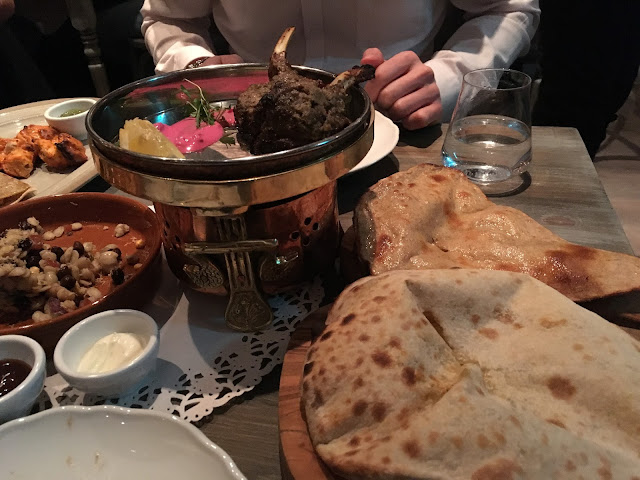 Then the rest of our order came flying onto the small table all at the same time. The layered roti was missing layers, and they were baked to taste more like crackers than roti.

The blue cheese naan was great - my favourite of the evening - with enough pungent cheese between the thin sheets of ghee-brushed naan, it was delicious on its own. Truffle oil was unnoticed, probably for good.

Unfortunately not a lot of options on the menu had curry sauce to go with the roti or naan, so it felt like these sides were thrown on as an afterthought. 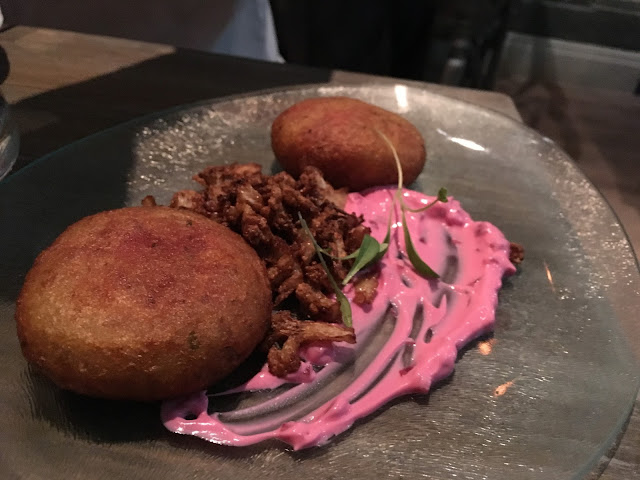 Oh hello more pink goo. The potato cakes were stuffed with some very spicy filling. He quite liked it, with the powerful heat and crispy cauliflower florets on the side. The beetroot goats cheese lubricated the crispy shells and reined in the chillies, so the composition came together when I eventually got over the shocking pink on the plate. 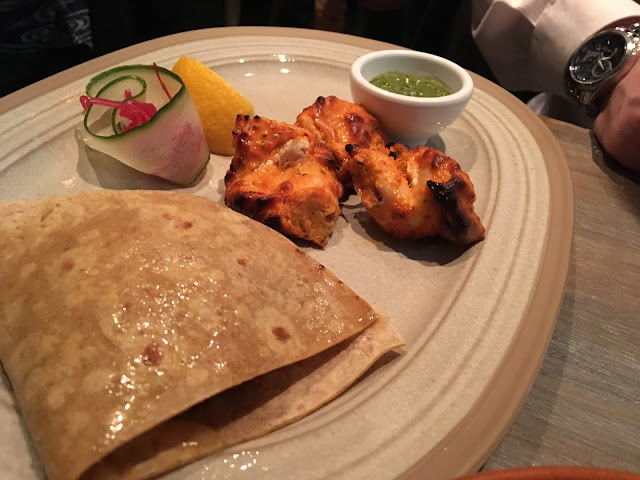 I'm still trying to work out what the modern take was on this chicken tikka. Smaller cubes of spice-rubbed chicken served as a quesadillas. It was very good, as was the 3 larger chunks of chicken that didn't make it into the wrap. And this reminded me of Trishna. The way dishes were presented more stylishly, but the flavours were exactly the same as the same Indian takeaway round the corner of your house. Tikka is tikka. 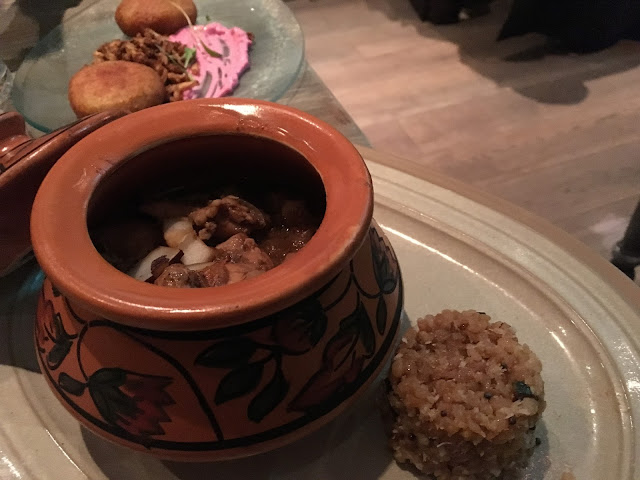 We ordered one item from the 'Imperial Gem' section of the menu. The chunks of chicken were cooked with 18 ingredients, and though served in a flavoursome gravy, it wasn't very Indian as it was lacking punches of fragrant spices and herbs, probably more similar to the Chinese dish of chicken in black bean sauce. At least there was plenty of sauce, so we could soak the cracker-like roti in the little pot of non-curry. It came with a tiny ball of cold stale rice that we jokingly said we wouldn't have touched in Delhi. 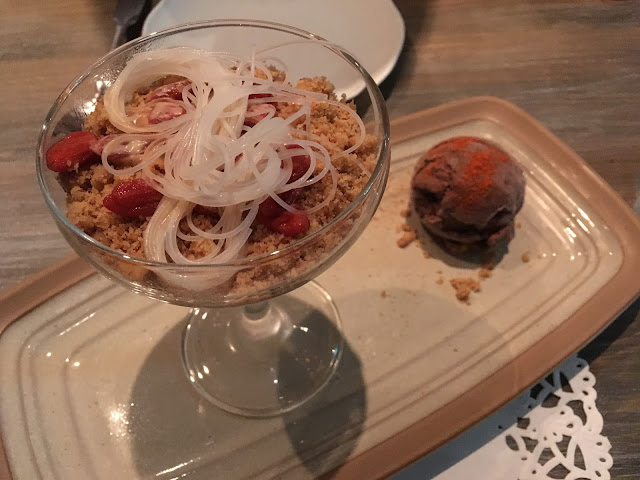 All ended on a sweet note with the goji berry dessert recommended by our server.

All in all we weren't impressed. As with other ‘elegant' Indian establishments, it's the same flavours and same dishes presented in a prettier wrapper. Food was leaning on the dry side, lacked sophistication and far from innovative. The setup in Lokhandwala was also quite confusing. There was a bouncer at the door, then an owner-lookalike patrolling the floor, but not involved in serving and interacting with diners, plus two serving staff – our dashing Lucasz was energetic and enthusiastic with recommendations, the other lady looked slightly disinterested and angry throughout the evening. The ambience was odd to say the least.

It should probably just focus on the beautiful cocktails. Leave it to Dishoom to make Indian food trendy.
On our way home, he decided the place won’t last more than a year - we shall see.

You may also like:Dishoom, Trishna, Hoppers
at 15:33