From Timisoara, we took the 7:48am train to Vrsac, which was where we entered the Serbian border. From there we changed to another train to Belgrade. The train journey was peaceful and uneventful due to the emptiness of the train; some Romania officials came on in Moravita to collect our passports for inspection, then the same repeated with Serbian officials in Vrsac, who mumbled Bruce Lee was also from Hong Kong… Once we got our passports back, we moved to a Serbian train to continue our way to Belgrade. 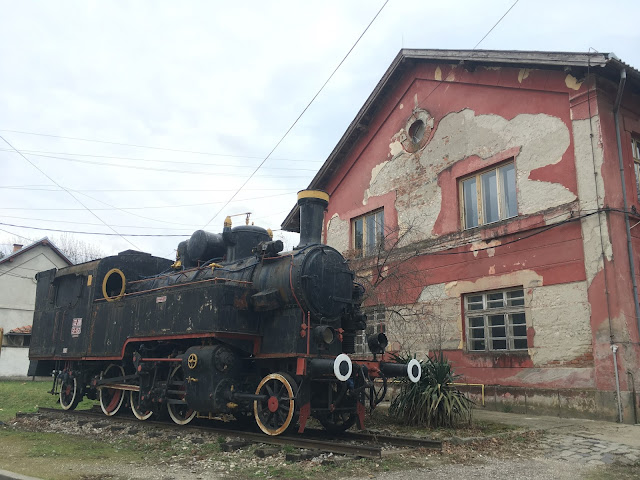 We arrived at the Beograd Dunav station around 11:30am, slightly further out from the city centre. We strolled our way towards the centre and made our first stop at the renowned Bucko Pizza. The tiny pizza bar earned raving reviews from locals, yet I wasn’t sure if I came to Serbia for pizza… but boy I would definitely come back to Belgrade for this. 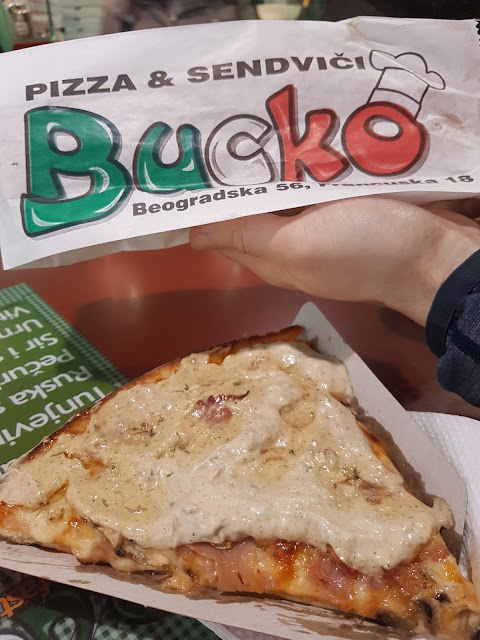 The thin margarita pizza was smeared with a thick layer of salad, choice of beef or chicken; we went for beef. It was freaking delicious – hot, crispy and indulgently creamy. We also tried the toasted panini sandwich with ham and chicken salad, which was really good, just not half as heavenly as the pizza. Must try.

After checking in and a quick nap, we dropped by a cute little café called Ferdinand. He found it online and was attracted to the sweet and savoury dumplings that looked like Japanese mochi. There was a constant stream of people at the counter, some were ordering boxes of these goodies. At the time, there only had 3 types of dumplings on offer: mushroom, cheese and chocolate & cherry. 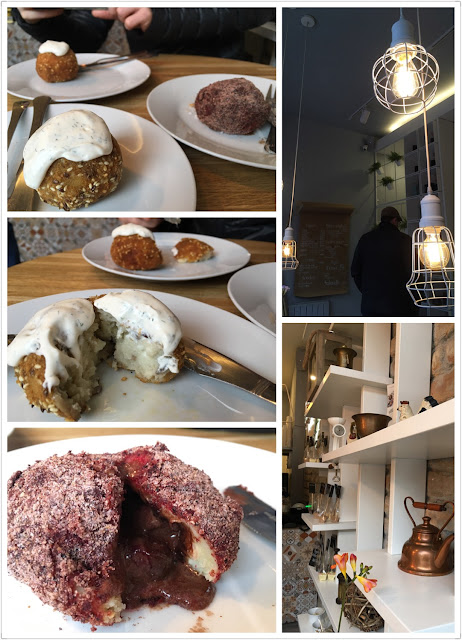 The savoury ones were like crispy potato cakes, served with a dollop of cream on the top. We preferred the mushroom one, but the chocolate & cherry was definitely more exciting. It was soft but chewy on the outside, enveloping gooey melted chocolate infused with tangy cherry coulis. The kitchen kept churning out fresh ones to replenish stock, by the time we finished, there were a few more new options back on the shelf.

We joined the free walking tour at 4pm, where our guide Teah explained the importance of the main square and recommended opera and ballet at the National Theatre. It was a shame that on the evenings we were staying at Belgrade, there were only drama shows (in Slavic), otherwise we would have loved to experience the theatre. Then we walked to the Skadarlija, where we dubbed it as Belgrade Covent Garden. Teah shared with us some homemade honey rakija, which was the national drink of Serbia. It was strong… We learnt the commonality of Slavic languages, walked to the oldest mosque and headed towards the fortress. It was getting really cold after walking outside for an hour… 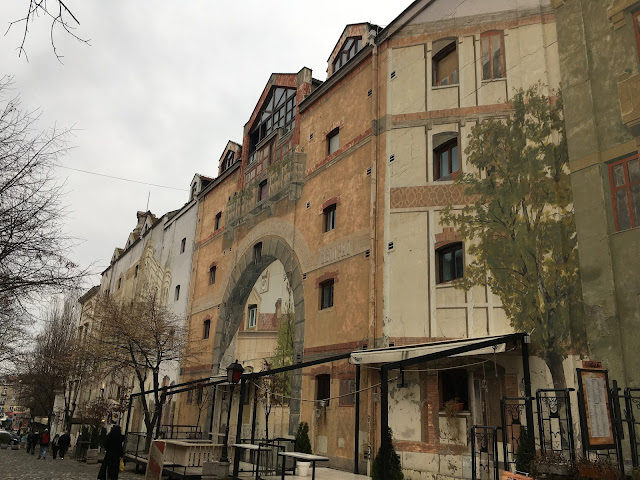 Unfortunately the weather wasn’t glorious, which made the fortress park looked grim and depressing (her words, not mine). The once-white fortress doesn’t look so white anymore, as the city was wiped out a few times in various wars. On a sunny day, the fortress would be a great spot for sunset as it overlooked where River Sava and Danube joined. We finished the tour with a stop at the city main cathedral and outside the National Bank of Serbia. Teah was very informative and open with questions around historical conflicts and controversy around Kosovo. No doubt she has her personal views of the media exaggerating certain situations, and we have ours on the locals downplaying some. It was quite a good tour. 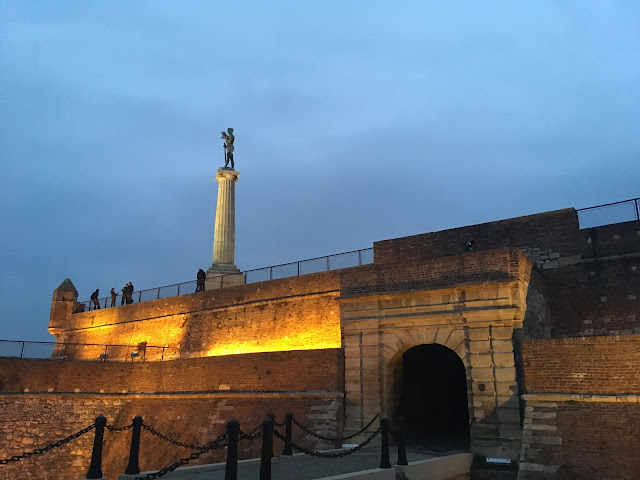 For dinner we made a reservation at Mala Fabrika Ukusa, a little out of the main town close to Temple of Saint Sava.

It was a charming restaurant with the country cottage décor. The menu focuses on fresh market produce and vegetables. We started with a couple of local Serbia red wines, which were surprisingly delicious and round.

Since this was our first proper meal in Serbia, we wanted to try more traditional dishes. This is probably where we had gone wrong; given this restaurant was quite modern, we should have tried their more novel European dishes. The cevapi baked in crumbled feta was slightly salty and the sausages were leaning on the dry side. Compared to the ones we had in the rest of the trip, this wasn’t particularly good. The sarma, which was minced meat mixed with rice, wrapped in cabbage, was good; moist and good balance of flavours but nothing worth writing home about. That said our starters were excellent. The small prune with concentrated sweetness worked well with the small morsel of breaded cheese; the pepper was stuffed with creamy cheese and encased with a crispy shell for satisfying mouthfeel. 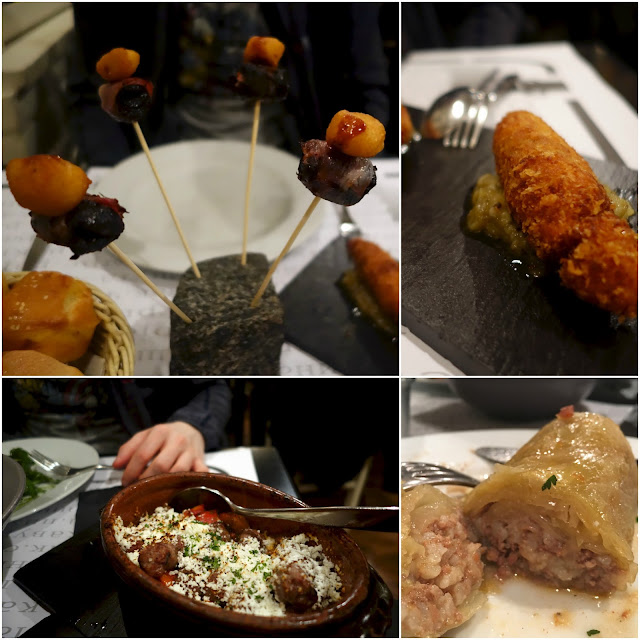 The hazelnut parfait wasn’t much like a parfait, but it was a good finish to an enjoyable meal. We walked to Saint Sava Orthodox Church after dinner before calling it a day. 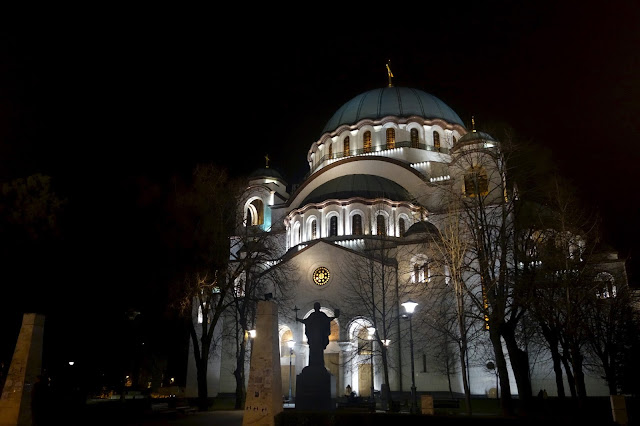 The following day was “Everything-is-closed-except-for-museums-Sunday”. The famous burek bakery was closed, then we headed to Nova Grad, passing a surreal SIM-city style business park area on the tram before arriving at a flea market where locals sell absolutely everything under the sun. I kid you not, anything and everything – from a worn and used single left football boot, to a mammoth block television set that was clearly older than my dad. But the common theme was: junk. In the ‘wet market’ area, we saw this little cutie who look just like Tofu but had natural eyeliner on. 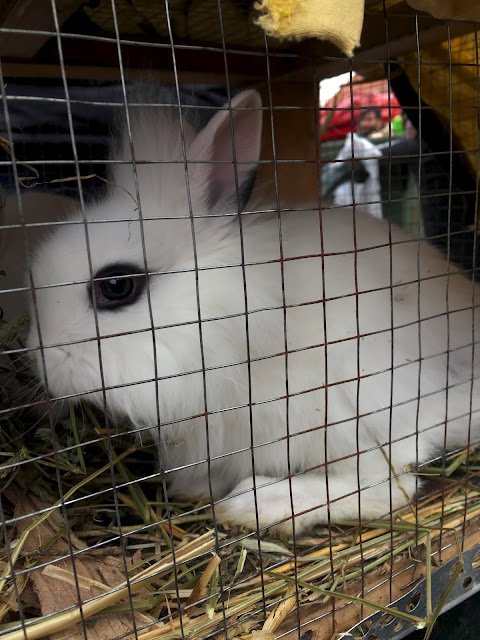 The pancake shack we wanted to try was also closed. Seeing it was a cold gloomy windy day, we were better off heading back to the other side of town and browse museums. There wasn’t much more to see in the city, but we worked out a plan in Choco caffe as we sipped real thick hot chocolate and shared a slightly stale cake: tick off a couple of museums, find something open for lunch, escape room challenge then buy bus tickets for the next day to Sarajevo. 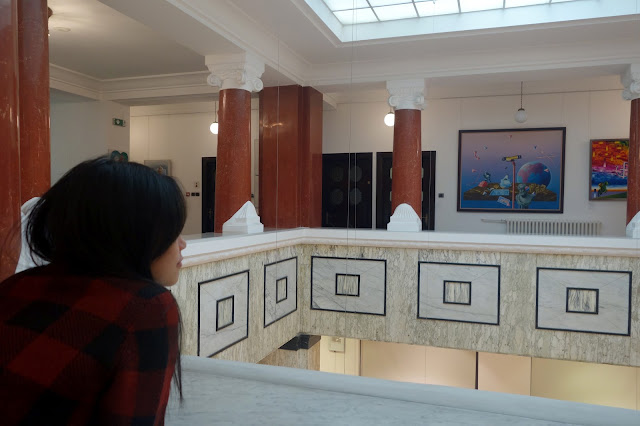 As Teah from the walking tour pointed out, museums and exhibitions in Belgrade are small, most of them take 20mins or less to cover. We started off with Zepter Muzej, which housed a small collection of contemporary artwork. The building itself was arguably more interesting than the exhibition. Then we crossed the road to an exhibition about Serbia in the world wars. It’s interesting the way historical events were portrayed in a fairly ambiguous manner, and I didn’t notice until I caught up with all the facts and timelines in Bosnia. There was a lot of emphasis on its role 'liberating' countries, but things are quite woolly on specific events and what they did... 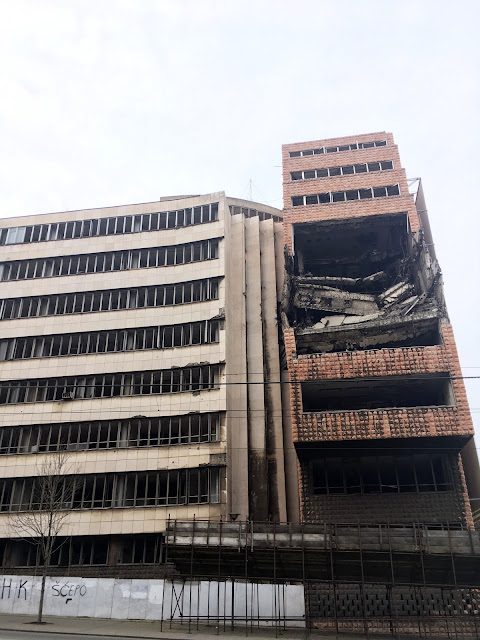 Lunch was challenging as many of our starred places were closed on Sunday. After much walking from one closed door to another, we landed at 'To je to!', known for their cevapi and traditional burger. We had a couple of sarma, a small cevapi and pjeskiva, with all the recommended condiments, including a spicy aubergine paste and kajmak (local cream cheese). We definitely prefer the burger to the sausage form, and this local eatery did it much better than the fancier restaurant from the night before. It came with chopped onions and shredded cabbage salad, making it a hearty kebab. The kajmak was the highlight for me, it was indulgently rich and dense. 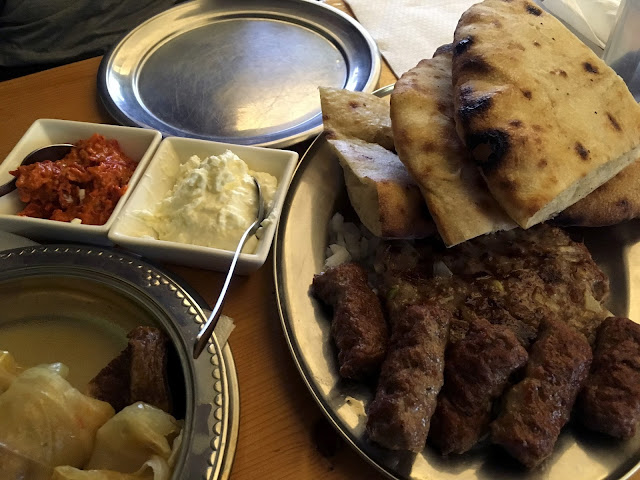 Then it was time for the escape room challenge. The theme was Robin Hood and we had to find a crown. The host was a little surprised to see only 2 of us, but we proved our worth by completing in 50mins! It was a well-designed room with an excellent variety of puzzles and tasks, full of surprises.

Since he drank half a pint of water in the game, we weren't ready for dinner. We wandered up to the bus station and learnt that there was only one bus per day at 4pm that leaves from the Belgrade city centre to Sarajevo city centre. Other buses either leave from the edge of town, or arrive into the centre of town, but they leave at higher frequency.

Seeing we have exhausted the list of things to do in Belgrade, we decided to go with one that depart at 1pm.

Dinner at Zavičej was mediocre. The veal soup was quite good and comforting, despite a thick layer of oil. The rolled schnitzel with stuffed cheese and ham was colossal, but quite dry with no sauce. The smoked pork neck was also massive, but again, dry and quite chewy. We lost interest about half way through the dish. One of the weaker meals we had on the trip. 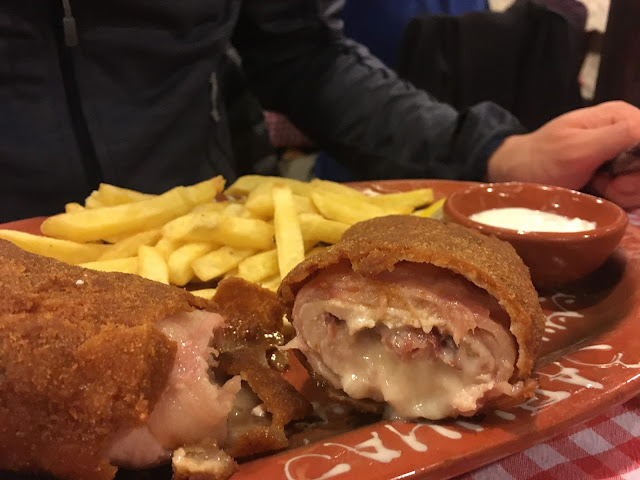 We made the most of the morning in town. Our first stop was the burek bakery that we missed on Sunday. The constant queue was a vote of confidence, and we shared a spinach & cheese burek with a yoghurt drink. Pretty good, especially compared to the stale one we had at the flea market. But it wasn't until we queued again and the guy in front of us said the cheese & ham was the No.1 item that people are lining up for. Damn this was freaking delicious. Extra flaky and crispy pastry oozing with melted cheese and savoury ham. Yea it was covered in grease and I could feel my arteries blocking, it was worth it. 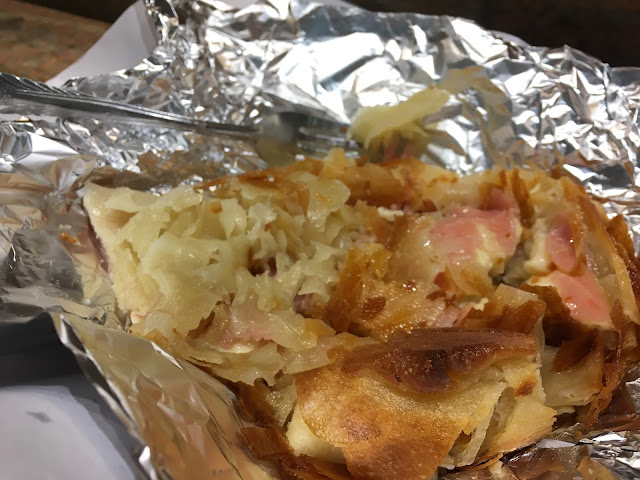 After a satisfying breakfast, we headed to the National Bank of Serbia, which also house a small museum of the notes and currency through the ages of Yugoslavia and Serbia. There was a 300 trillion note from the days of depression, and a bunch of other interesting things to see. The best part though, was the gentlemen that helped us print our faces on a bank note. 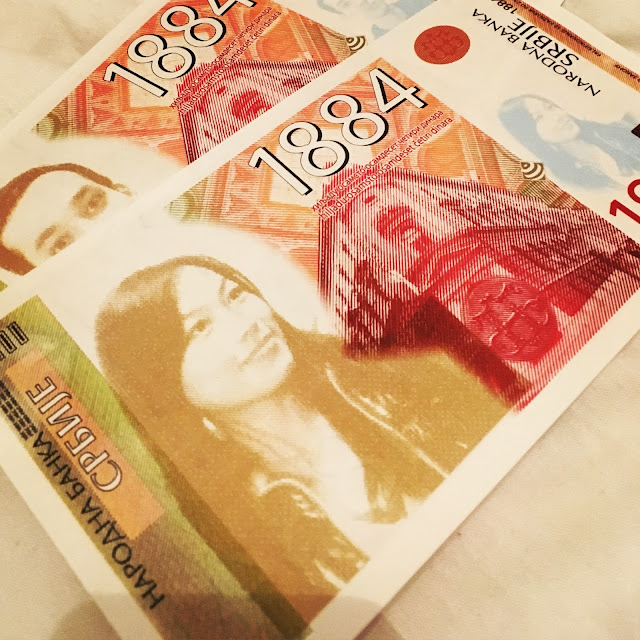 The sun was finally making an appearance after two cloudy days. So we walked back to the fortress to better appreciate the park before heading to the bus stop.

Good thing we had some time to spare, so he could leg it back to the bank to pick up his passport. Would have been tricky to cross the border without it. 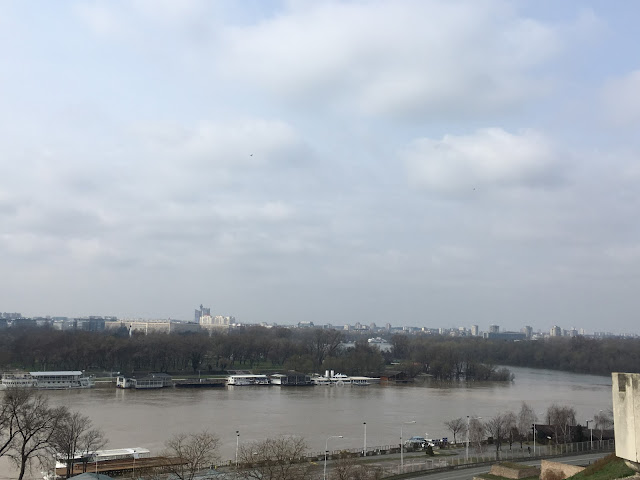 To access the bus platform, we had to buy two tokens from the office (180 SRK each), so lucky we didn't spend every penny.

7.5 hours later, we arrived at Sarajevo. 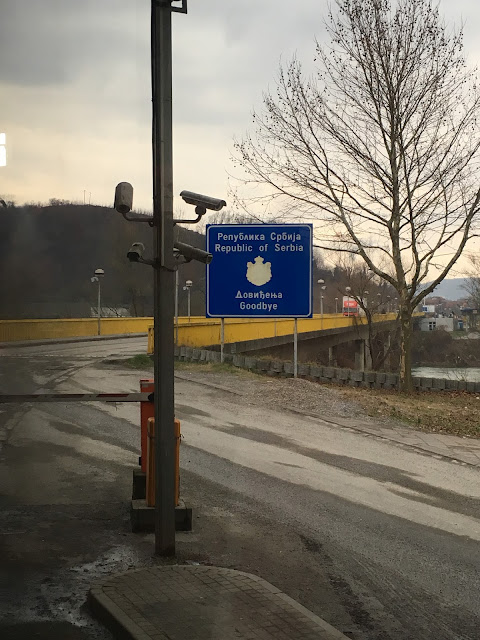