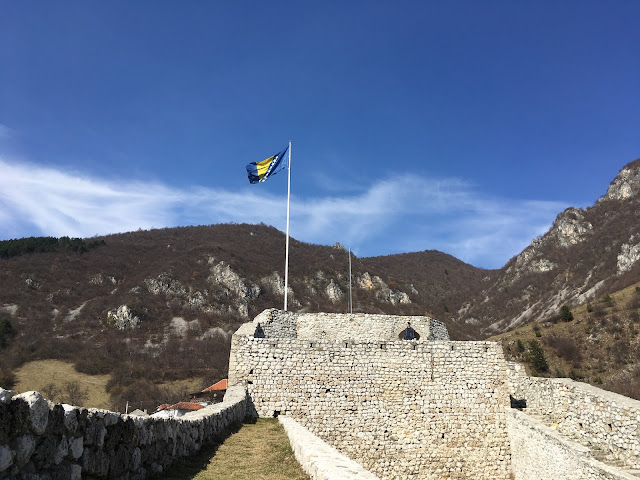 The drive to Travnik was relatively easy. We started off on the tolled highway before turning off to mountainous roads. It took just over a hour of very careful driving and going slightly under the speed limit to get to Travnik. We parked near the city wall, which thankfully also had toilets. The walls offered good views over the city. 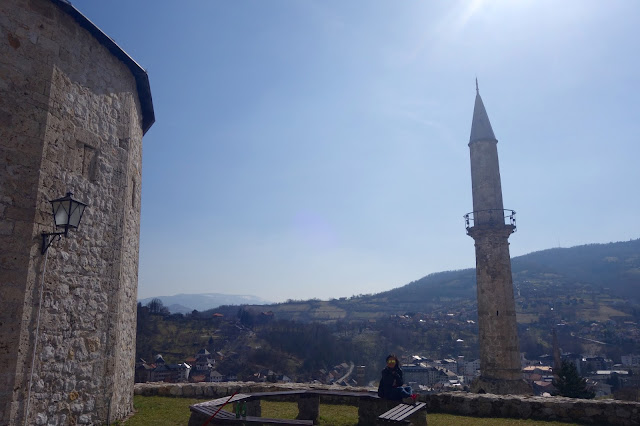 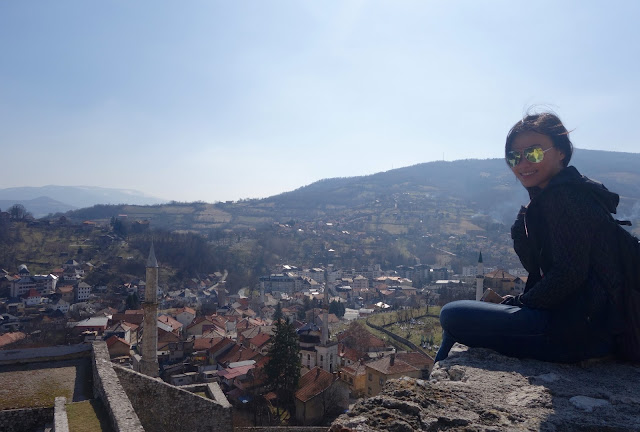 Then we walked down to the old town for a quick lunch, and were back on the cevapi / pljesviska diet - 'Hari' had best google reviews and it really was quite delicious. The meat patty was super juicy and the kajmak was extra creamy. I think we preferred the burger to the sausage form. Although they say it's the same meat, but I find pljesviska less salty, had more bounce and much more meat juice.

Then we were on the road again to Jajce. The roads were trickier here around the mountains, but the views continues to be breathtaking. After an hour we arrived at Jajce., where we were staying at the edge of town. It really didn't matter because it was a small place, easily walkable within 10mins. We checked out the 20m high waterfall in the centre of town, but didn't fancy the 4BAM to enter the 'viewing platform', which seemed a bit naf given we could see the entire falls from the top already. 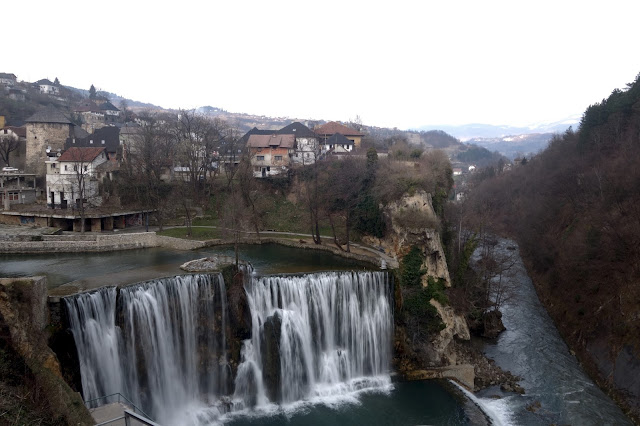 It was a quiet town. And understandably most people would drive all the way to Bihac for the night before setting off for the National Park Una the following day. But we wanted to take it easy and avoid driving in the dark where possible. So we walked up the fortress and saw all the restored buildings with their English explanation installed by the British council. Given it was low season, restaurant options were limited too, the more popular ones weren't open and we settled for pizza at Mega Dea. Just as well, I was happy to give traditions Bosnia food a break. 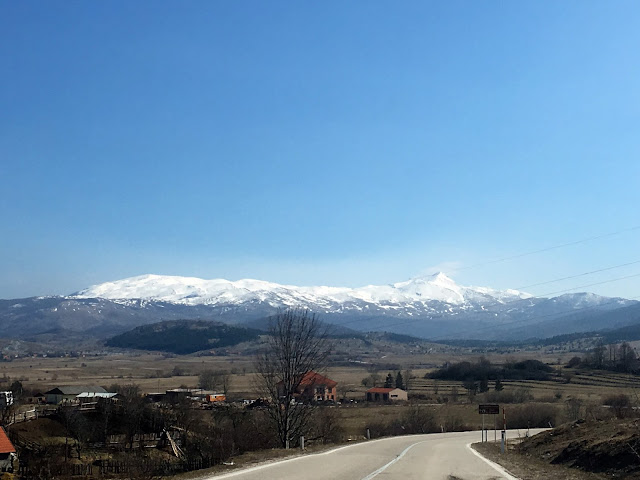 We picked up breakfast at Tropic supermarket the next morning before driving to Martin Brod, one of the more southern entrances to the National Park Una. An hour into the drive, we had to make a emergency loo stop at Kljuc, which also brought us to the one of the better restaurants on this trip. Google said the restaurant was called Kljuc kod Ramadana; there was no English menu so we went around the dining room and pointed at what other people were having. We ended up with veal in gravy and a soup, which was a nice change from heavy grilled meats and cevapi.

Unlike Plitvice Lakes, the setup of this park wasn't designed for a day trek around the area, because it was simply too big, one would have to drive from too to bottom. We didn't bother with the Northern part and headed straight to Martin Brod to keep our drive to Mostar shorter. 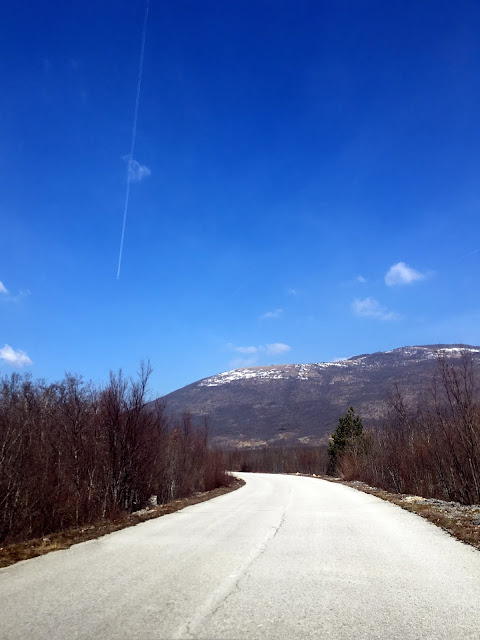 The condition of R406 is largely weather dependent. On the super sunny day we went, there were just large Shaf boulders along the bendy sections of the road, which was okay for us to navigate around. I can't imagine how it would be on a windy rainy or freezing day... As we were nearing the village, google wanted us to take a non-road down a steep hill. Thankfully we ignored it and took the long way round (extra 5mins). 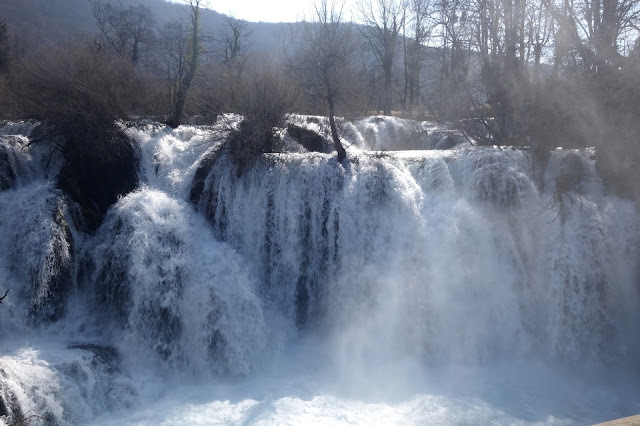 Since we were the only visitors, the ticket booth was unmanned. And we had the whole site to ourselves. The waterfall broke into a series of rapids and the bright turquoise waters were beautiful. 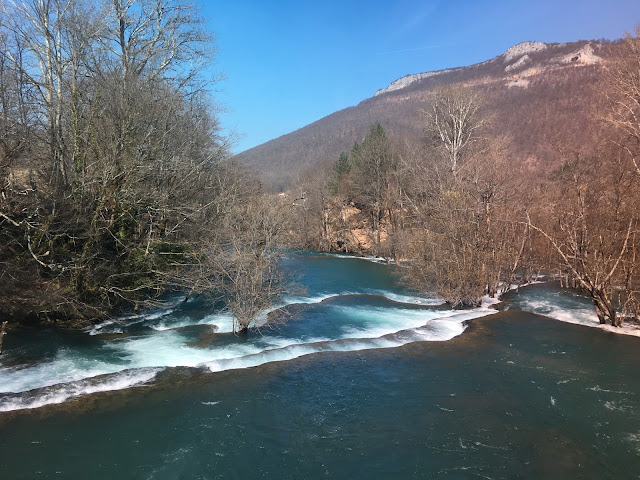 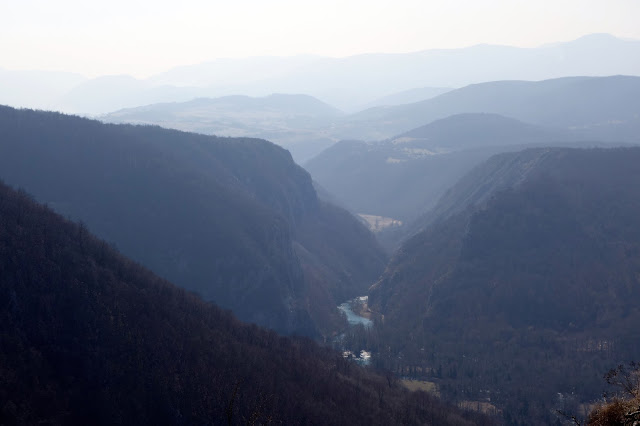 After a loo break we

began our 4-hr drive down to Mostar. Half the roads were flat in the valley, where we obliged to the speed limit and saw absolutely every type of vehicle overtaking us, from a badass Porsche to a couple of 20-yr old coaches. For good reasons, of course. We read there were plenty of traffic police on the highway, and we did see a few. Usually the incoming traffic would flash to warn us of the police ahead, which was incredibly helpful. Perhaps on a few stretches of flat, ruler-straight roads, we were possibly sticking too true to the limits. 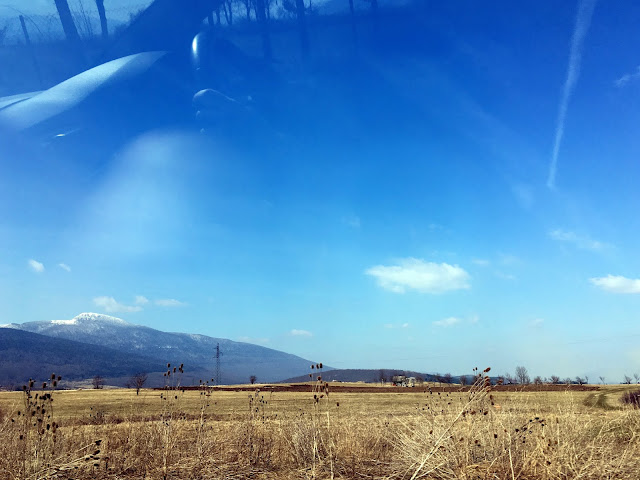 We took a break in Livno, about half way between Martin Brod and Mostar. It was a larger town with plenty of cafes and restaurants, but clearly not a popular tourist destination, just an everyday Bosnian town.

It was closer to 5:30pm when we were entering the edges of Mostar. Clearly a bigger city and heavy with traffic; trucks and lorries were less tolerant of diligent drivers, especially on a Friday. It didn't help that some of the key roads in the city were blocked off for some major works. We were exhausted by the time we parked our car. 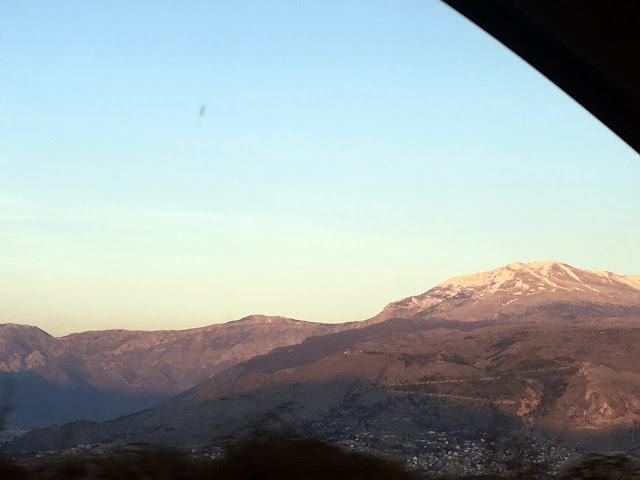 The pedestrianised area near the old town area was undergoing re-paving, probably hoping to finish before the summer crowds hit. We rested in our super comfy apartment before heading out for a late dinner. We made the mistake of going near the famous Old Bridge looking for a decent restaurant. Needless to say they are so geared towards tourists the quality was pretty damn low. We suspected it was herding theory but Šadrvan was brimming with people. Staff were dressed in traditional Bosnian attire and they take BAM, EUR and Croatian Kuna. In short it was scandalous, food was poor and outrageously overpriced. We were charged 10BAM (5euros) for a plate of grilled vegetables as a 'main' on top of the 2 main dishes we ordered. Apparently the server didn't know there was the veg sides option on their own menu. Scam.